Thrustmaster TMX Review: Budget FFB for Xbox One and PC 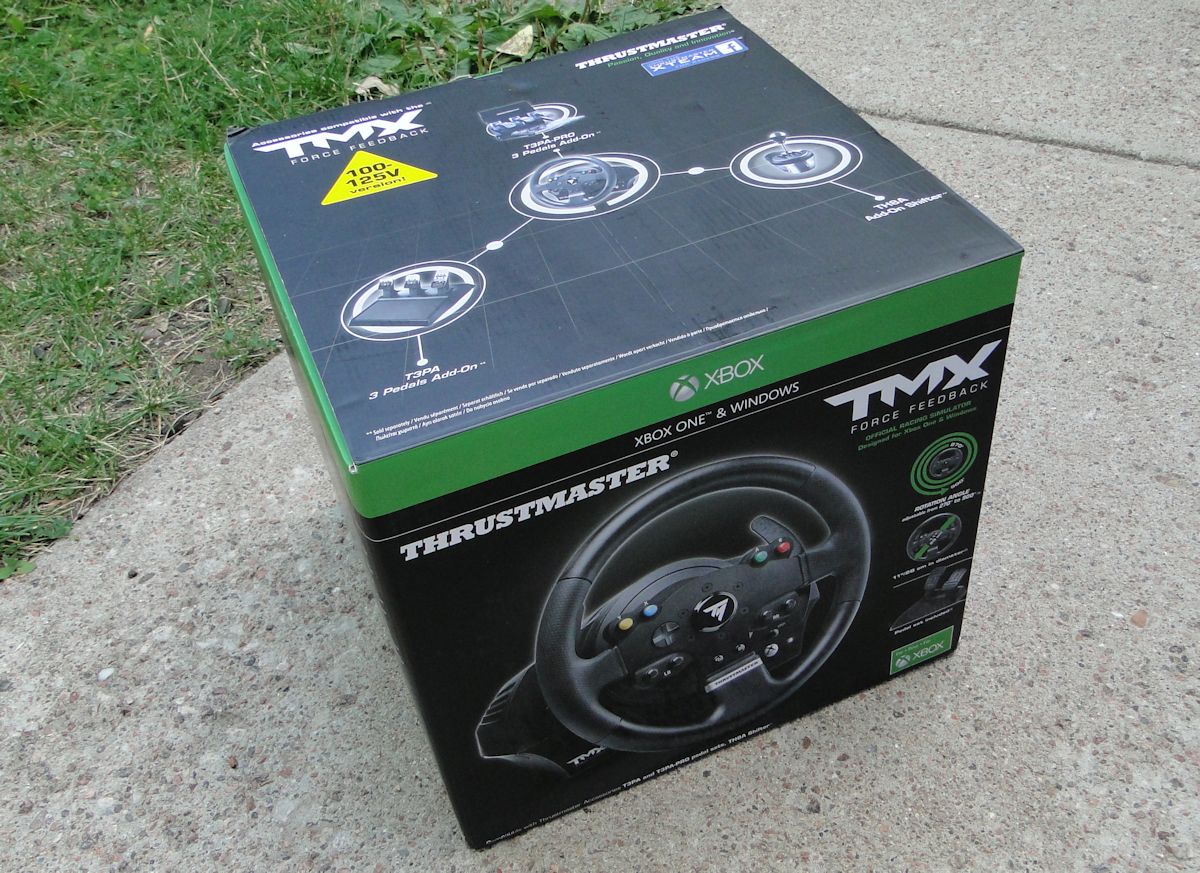 Thrustmaster’s entry level wheel for Xbox One and PC

The Thrustmaster TMX was released this past summer to address the Xbox One ecosystem with an affordable, entry level force-feedback wheel.  This is essentially the Xbox version of the previously reviewed Thrustmaster T150 for the PS3/PS4.  There are many things that these two wheels have in common, but there are a few significant differences as well.  The TMX is also PC compatible, which is what I tested it upon.

A no-nonsense box design that lets the buyer know exactly what systems this product is for.

The TMX is priced at an MSRP of $199.  Along with the T150 this is truly an entry level FFB wheel with all of the features that racers desire.  The wheel itself is 11” wide and the base is compact, with a solid feel.  Unlike the T150, the TMX is entirely decked out in multiple shades of black.  The majority of the unit is a dark, slick black while the rubber grips have a matte finish.  The buttons on the wheel are colored appropriately according to the Xbox controller standards (yellow, blue, green, and red).  The other buttons are black with a couple of them having some white stenciling on them.

The motor in this part is not nearly as powerful as what we find in the TX and T300rs base units.  Those are full pulley based parts with relatively strong motors while the TMX is a combination gear and pulley system.  This provides a less expensive setup than the full pulley systems of the higher priced parts, but it still is able to retain pretty strong FFB.  Some of the more subtle effects may be lost due to the setup, but it is far and away a better solution than units that feature bungee cords and basic rumble functionality. 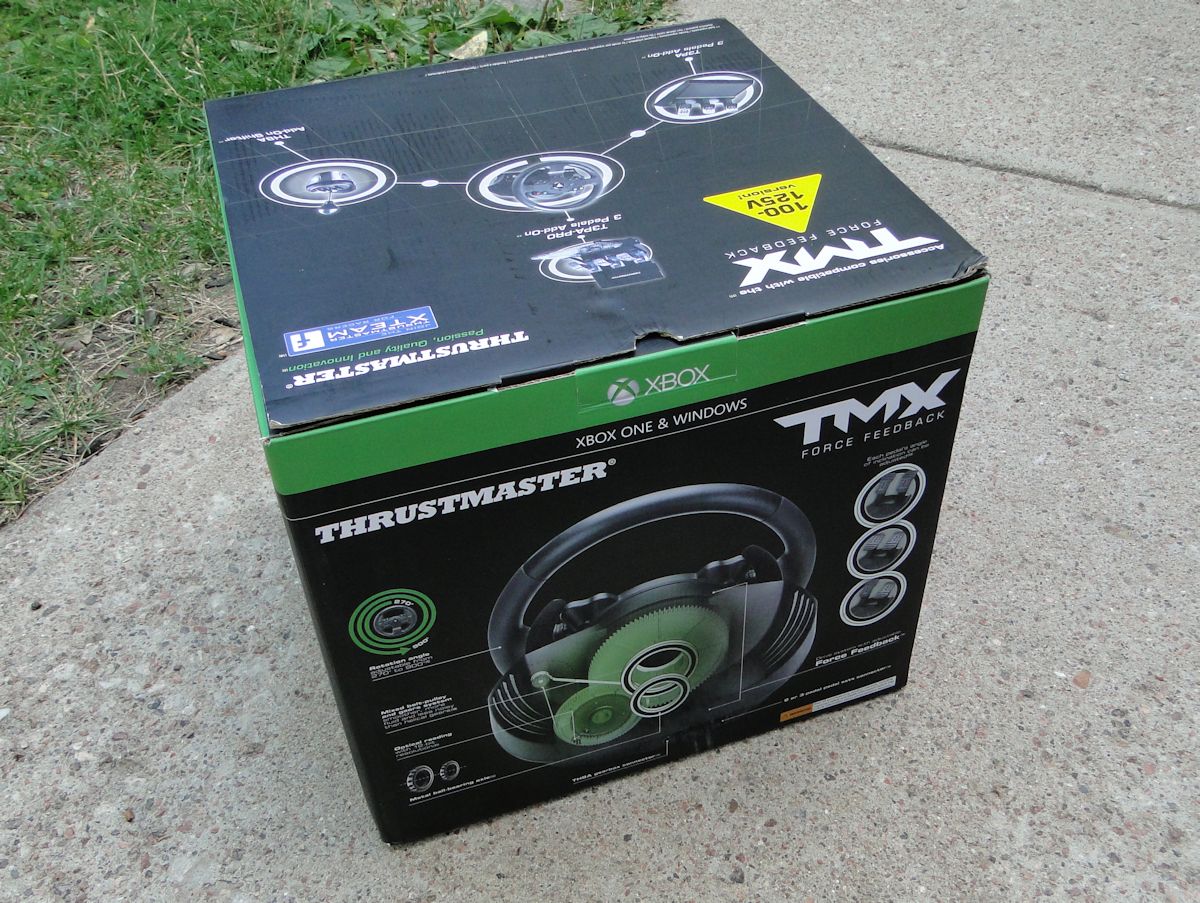 The back shows a basic diagram of the mixed pulley and geared subsystem for force-feedback.

The wheel features a 12 bit optical pickup sensor for motion on the wheel.  This translates into 4096 values through 360 degrees of rotation.  This is well below the 16 bit units of the TX and T300rs bases, but in my racing I did not find it to be holding me back.  Yes, the more expensive units are more accurate and utilize the Hall Effect rather than an optical pickup, but the TMX provides more than enough precision for the vast majority of titles out there.  The pedals look to feature the same 10 bit resolution that most other Thrustmaster pedals offer, or about 1024 values for several inches of travel.

It seems that most wheels that conform to Xbox standards feature 900 degrees of rotation vs. the 1080 degrees of the PS3/PS4 based T150.  This unit shares the ability to program the wheel to handle from 270 degrees of rotation up to the full 900 degrees in whatever increments the racer desires.  While it would be nice to have the full 1080 degrees, obviously Microsoft holds licensees to certain specifications when developing for the console.  In my experience the difference between the two is negligible.  I was easily able to adapt to the slightly more “compressed” 900 degrees.  In fact, I felt a bit more comfortable with it than the 1080 degree T150 in the titles that I used. 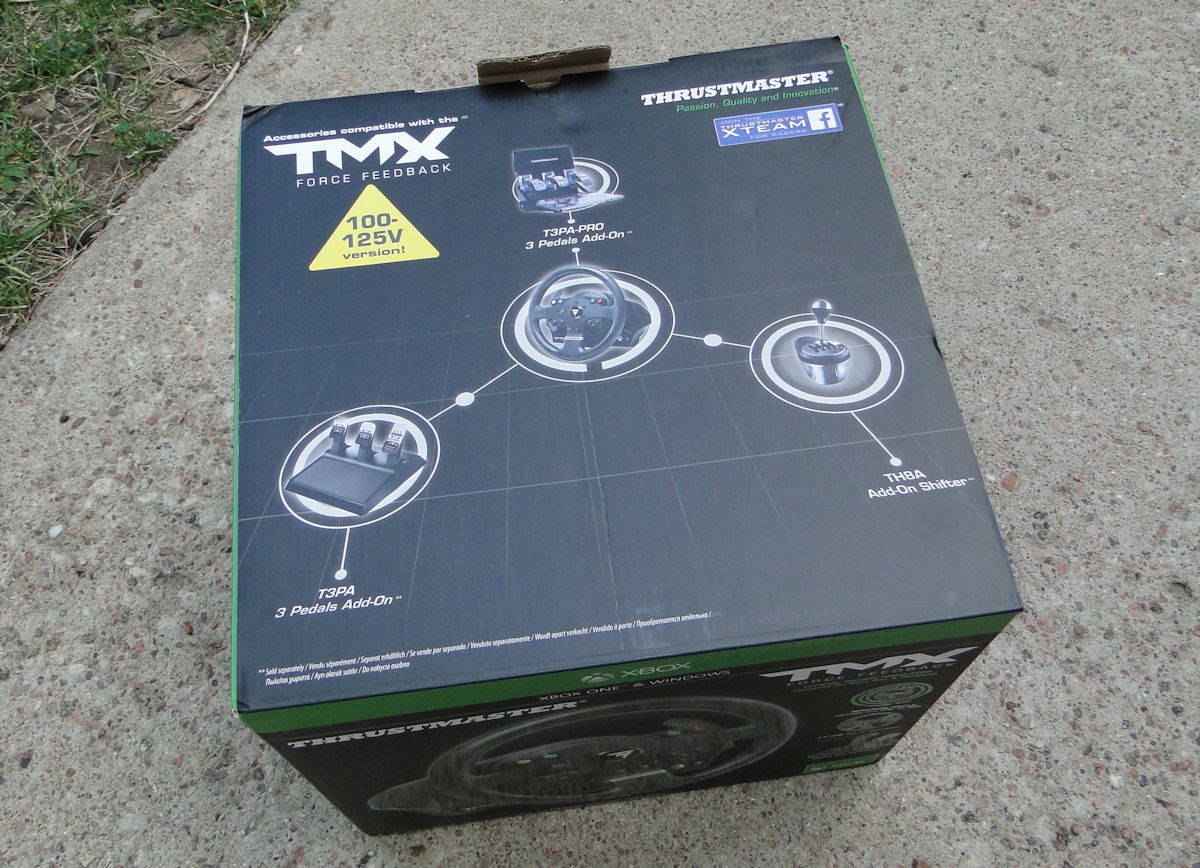 A few of the add-ons that can be attached to the TMX.

One of the more surprising upgrades from the T150 involves the power.  The T150 features an external power brick while the TMX internalizes that functionality.  This makes for a cleaner setup and easier cable management.  The only downside is that if the power supply burned out, it could more easily be replaced on the T150.  If that were to happen after years of use, then it would be a no-brainer to just upgrade the setup if it is used often.

The mounting mechanism is the same as on the T150.  It is a metal bolt attached to a metal receptacle so that cracking plastic should not be an issue.  The lever and ball joint are both plastic, so some wear and tear issues could pop up over the life of the product.  Products such as the TX and T300rs feature all metal constructions for the bolt, receptacle, pivot, and lever.  The mechanism can still get quite tight and it will hold the base in place without problem. 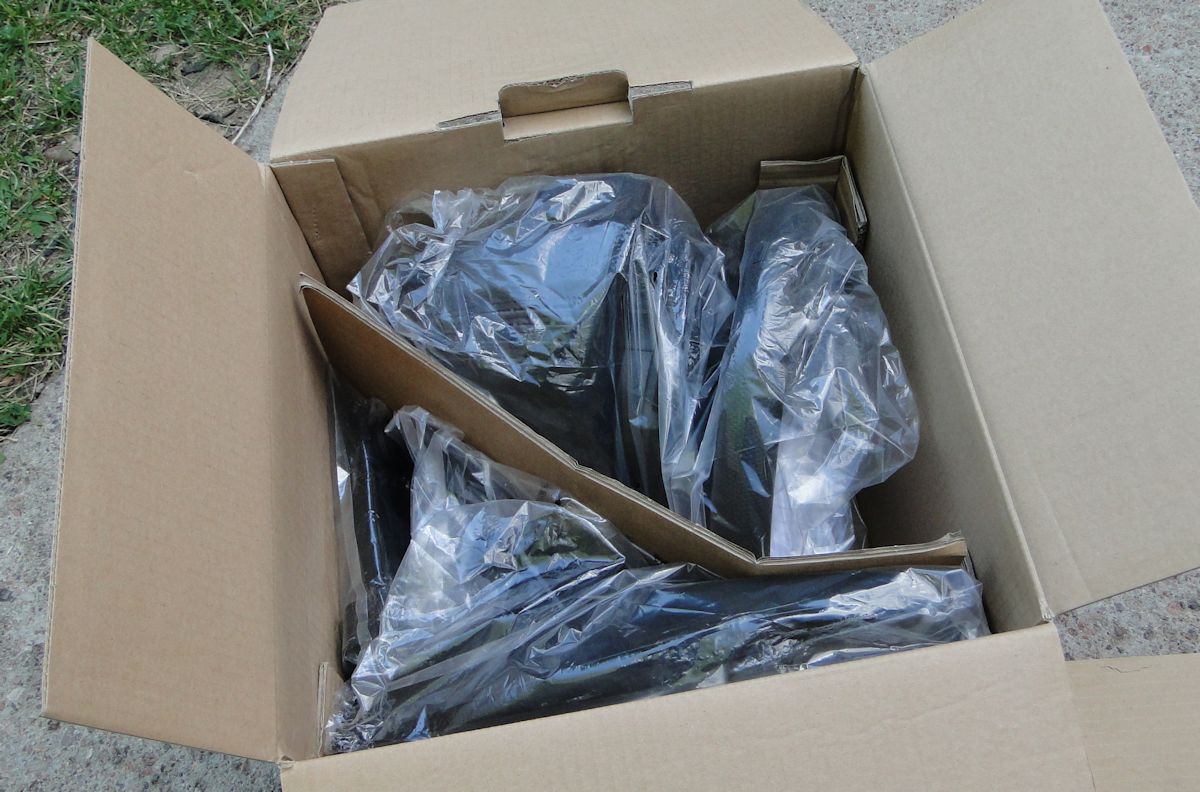 The packaging is basic, but good enough to protect the unit during shipping.

The pedals are probably the weakest part of this entire setup.  They are entirely made of plastic and have very little heft.  If they are not mounted or have something backing them up, they slide all over a variety of surfaces with use.  To help fight against that, it seems Thrustmaster has limited the amount of resistance for both the accelerator and brake.  There is a slight progressive feel with the brake, but it is nowhere near what a user will get with higher end pedals.  The pedals can be adjusted by removing and replacing the flat pedal surfaces on the stems.  There are 4 potential combinations users can change to and fit their driving style. 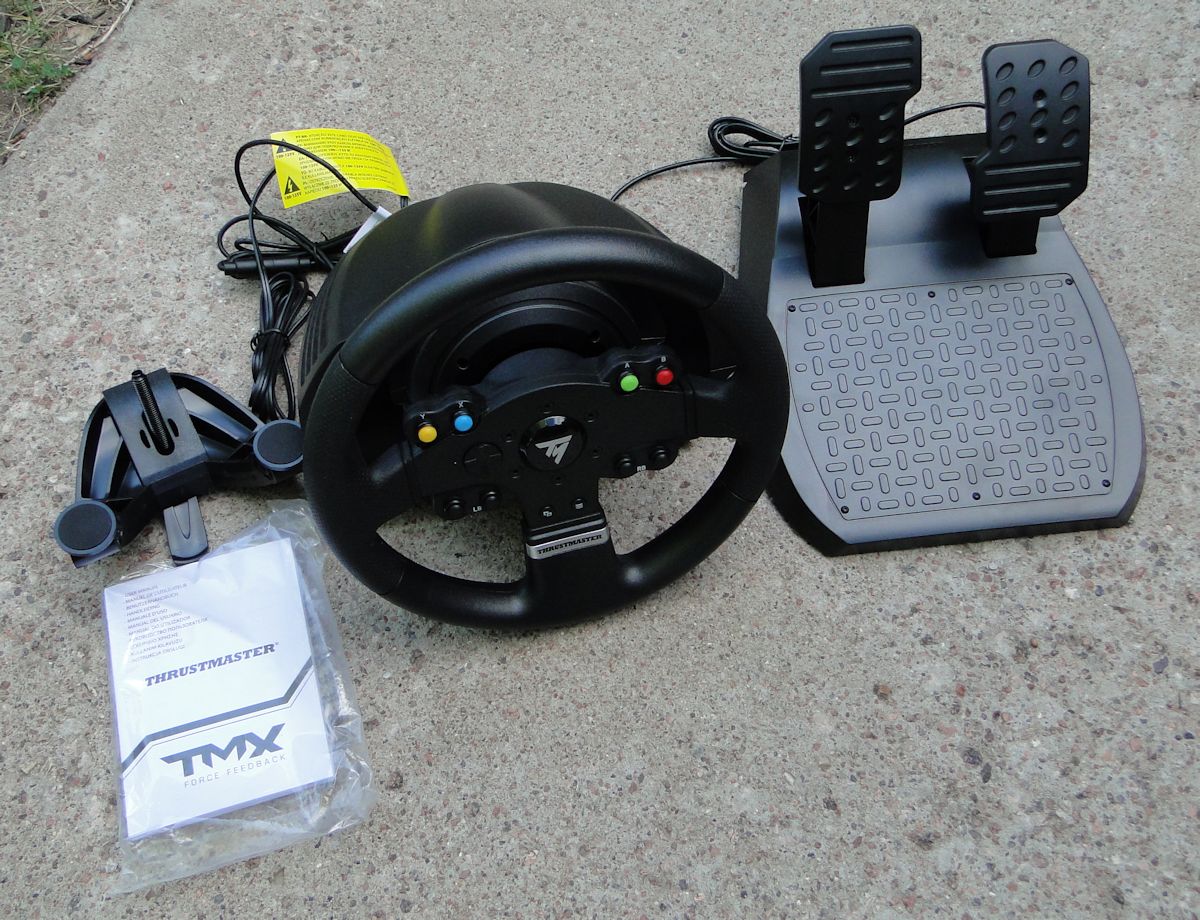 Everything in the box that is fit to photograph!

The strength of this setup is the ability to add the other Thrustmaster ecosystem of products.  The wheel itself cannot be removed and replaced like in the TX and T300rs bases, but the different pedals and shifters can be added to the mix.  This could be a solid building block for people who want to add pieces to the setup one at a time, and in the future upgrade the base which will also accept these other parts.