We measured the AC power input to the FSP Twins 500W redundant PSU with an Extech power analyzer (both power cords plugged into the single Extech output) while the total DC load was found by adding all the individual +3.3V, +5V, +12V, -12V and +5VSB loads together.

OK, this is where things start getting interesting and a little weird. Based on the way we normally review a standard desktop PC power supply, our test results show the FSP Twins 500W redundant power supply does not meet the 80 Plus Gold criteria while operating on either 115 VAC or 240 VAC; except at 100% load.

Problem #1: Note the “230V Internal” in the description above. This is a special classification used for power supplies that are being certified for redundant, data center applications. And it only applies if the PSU is being powered from 230V mains.

Explanation: When a manufacturer submits a power supply for 80 Plus certification, there are four different categories to choose from: 115V Internal, 230V Internal, 115V Industrial, and 230V EU Internal. Most PC power supplies for desktop applications fit into the “115V Internal” category. This doesn’t mean they have to only operate at 115 VAC (the majority feature universal input and can operate anywhere between 100-230 VAC), it just means they have to meet the 80 Plus criteria while operating on 115 VAC. And this is important because as the input voltage goes up, so does the efficiency. For example, a typical PSU operating under a 50% load will exhibit ~2% higher efficiency at 230V than it does while operating on 115 VAC.

So now we see that the FSP Twins 500W PSU is only certified to meet the 80 Plus Gold criteria when it is operating on 230V mains. OK, it is a redundant power supply and could be used in a data center (although FSP is targeting home users).

Problem #2: As it turns out only the power supply modules are 80 Plus Gold (230V Internal) certified; the Twins 500W power supply is not.

I personally feel this is a bit misleading as the FSP Twins 500W redundant power supply is the sum of its parts and was not designed to work separately. So why doesn’t the Twins 500W PSU meet the 80 Plus Gold certification requirements since it uses two modular power supplies that are 80 Plus Gold certified (and yes, they are listed on the ecova Plug Load Solutions website)? Good question, let’s look at the data and try to sort this out.

Explanation: Clearly, from our test results the FSP Twins 500W redundant PSU only meets the 80 Plus Gold criteria for efficiency while operating at 100% load. The criteria are not met at either the 20% or 50% load mark, even when operating on 230V mains. The reason is we are not measuring the efficiency of a single power supply module. When testing the Twins power supply, we are testing two modular power supplies operating in parallel along with the overhead of the main chassis/frame circuitry.

To confirm this I went back and retested the Twins 500W PSU with only one modular PSU in operation. These test results are listed in the efficiency table above in the right-hand column under the heading “Single PS Module”. With only one power supply module operating, the Twins 500W PSU now meets the 80 Plus Gold criteria at all three load points (20%, 50% and 100%) when operating on 230V. Next, let’s look at the efficiency graphs. 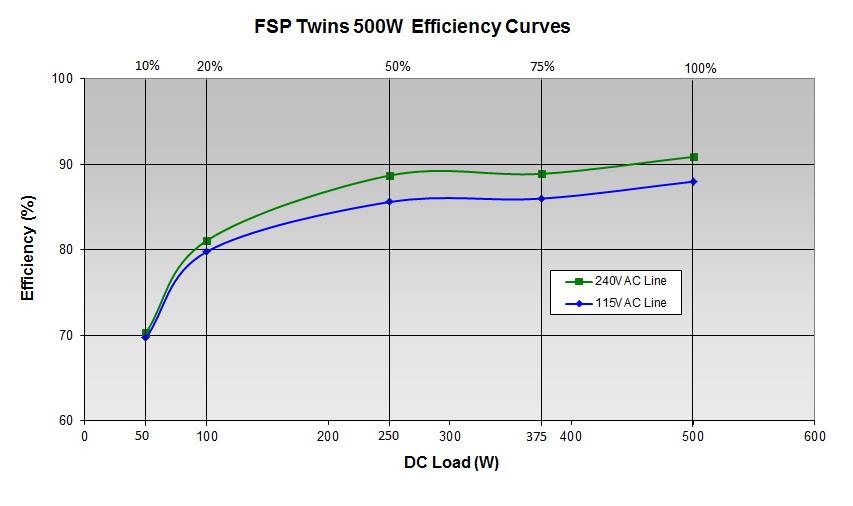 For reference, here is what a standard PC power supply efficiency curve normally looks like (we’ll even use an FSP 80 Plus Gold certified model as an example). 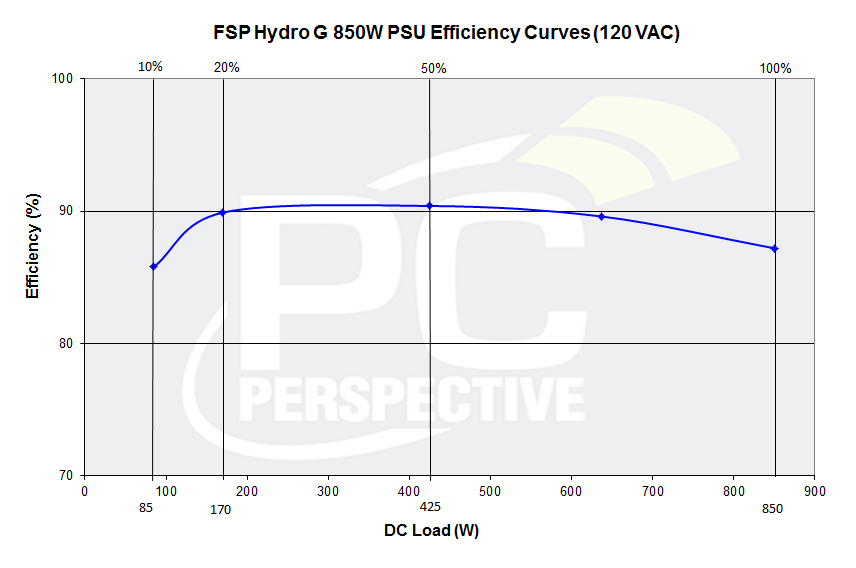 Because the 80 Plus Gold certification focuses on a power supply achieving a minimum efficiency at three different load points, we will examine these points on the graph.

20% Load: A power supply typically starts out with a low efficiency which increases sharply as the load increases. By the time the load reaches the 20% mark the power supply should be operating with at least 87% efficiency to meet the Gold criteria. Note in the graph above the Twins 500W PSU does not reach this target at either 115V or 240V; not even close. This is because we have two power supplies operating in parallel and sharing the load; both of which are operating under a 10% load with very low efficiency.

50% Load: The majority of PC power supplies will reach maximum efficiency at 50~60% load. But again, since we have two units operating in parallel, each one is only operating under a 25% load. Now subtract the overhead created by the +3.3V and +5V DC-to-DC converters and other circuits inside the main chassis/frame, and efficiency goes down even more, missing the 90% Gold mark.

100% Load: While operating under a 100% load the Twins 500W PSU meets the 80 Plus Gold criteria of 87%, even while operating at 115 VAC. Normally the efficiency has fallen off by several percentage points by the time 100% load is reached. But for the Twins PSU we have two modular power supplies each operating at 50% load (their optimum efficiency) so the resulting efficiency goes up and easily meets the 80 Plus Gold criteria of 87% at a 100% load, even with the added overhead of the circuits inside the main chassis/frame. This is why we see the efficiency graphs for the Twins 500W PSU turning up at the end instead of arcing over in a smooth curve.

The FSP Twins 500W redundant PSU uses two 40mm fans for cooling. Unfortunately because of the physical space constraints and design of the two modular power supplies, using these little air turbines is a common approach with server-style power supplies. The PSU started out relatively quiet at the two low power test points but quickly ramped up to the point where they became very noticeable and eventually annoying. This is not a power supply I would use in a quiet work or home environment. 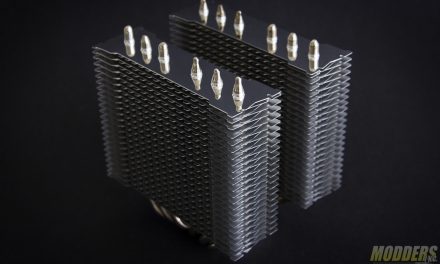 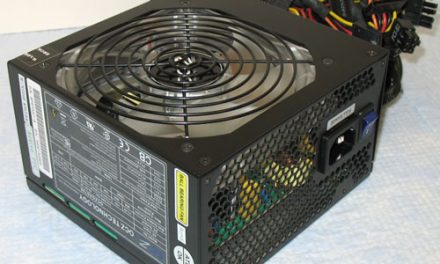