Listening tests using the selected audio tracks were performed with a Kingston HyperX Cloud Gaming audio headset as well as a 5.1 speaker setup to exercise the subsystem's audio fidelity. In both cases, audio reproduction was clear and distortion-free with little quality difference between the two audio setups.

For testing the board's Microphone input port, the microphone from a Kingston HyperX Cloud Gaming audio headset was used to capture a 10 second spoken phrase with the assistance of the Microsoft Voice Recorder application. The resulting audio file was saved and played back through the app.

Audio pickup was muted without Microphone Boost enabled with best voice reproduction requiring a minimum recording volume of 75% and Microphone Boost a +20dB. No distortion was evident during playback of record audio, but audibility was muted with lesser settings. With Noise Suppression and Acoustic Audio Cancellation enabled, voice capture remained unaffected and distortion-free. 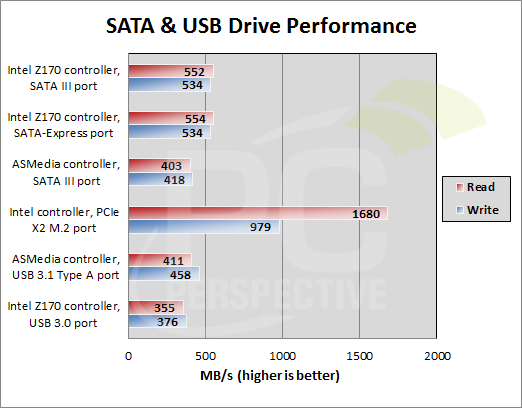 On the Z170 Intel controller ports, the SSDs performance fell as expected with little performance difference between the SATA and SATA-Express ports. Performance fell significantly with a drive connected to the ASMedia SATA ports, barely managing to outperform a USB 3.0-based device at just of 400 MB/s. The Samsung 950 Pro drive outperformed all the other devices, but exhibited a write performance ceiling just under 1700 MB/s because of the M.2 PCIe x2 bandwidth limit. For the USB-based device testing, the USB 3.1 GEN 2 port connected drive did outperform the USB 3.0 device but fell short of expectations with speeds measured between 400 – 450 MB/s and the USB 3.0 port with speeds around 350 MB/s. The USB 3.1 Gen 2 port's performance limitations are more likely because of performance inconsistencies between the adapter and the port rather than a USB chipset implementation issue. 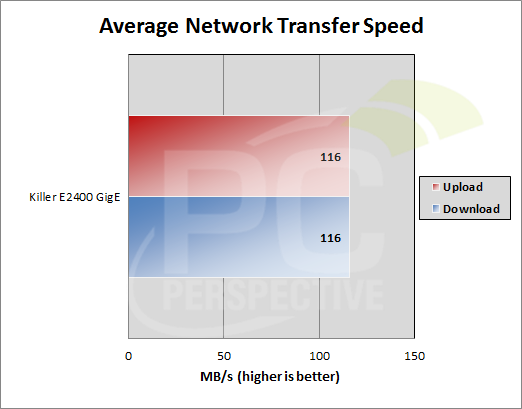 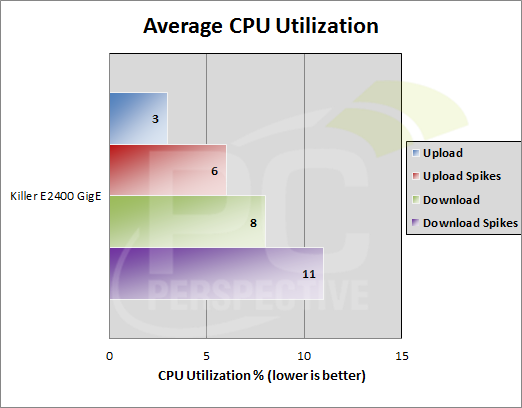 The integrated network controller performed well within expectations, averaging 116 MB/s for both upload and download runs. The CPU utilization numbers measured equally strong with averages remaining under 10% for the duration of all test runs with some momentary performance spiking during the download tests of just over 10%.