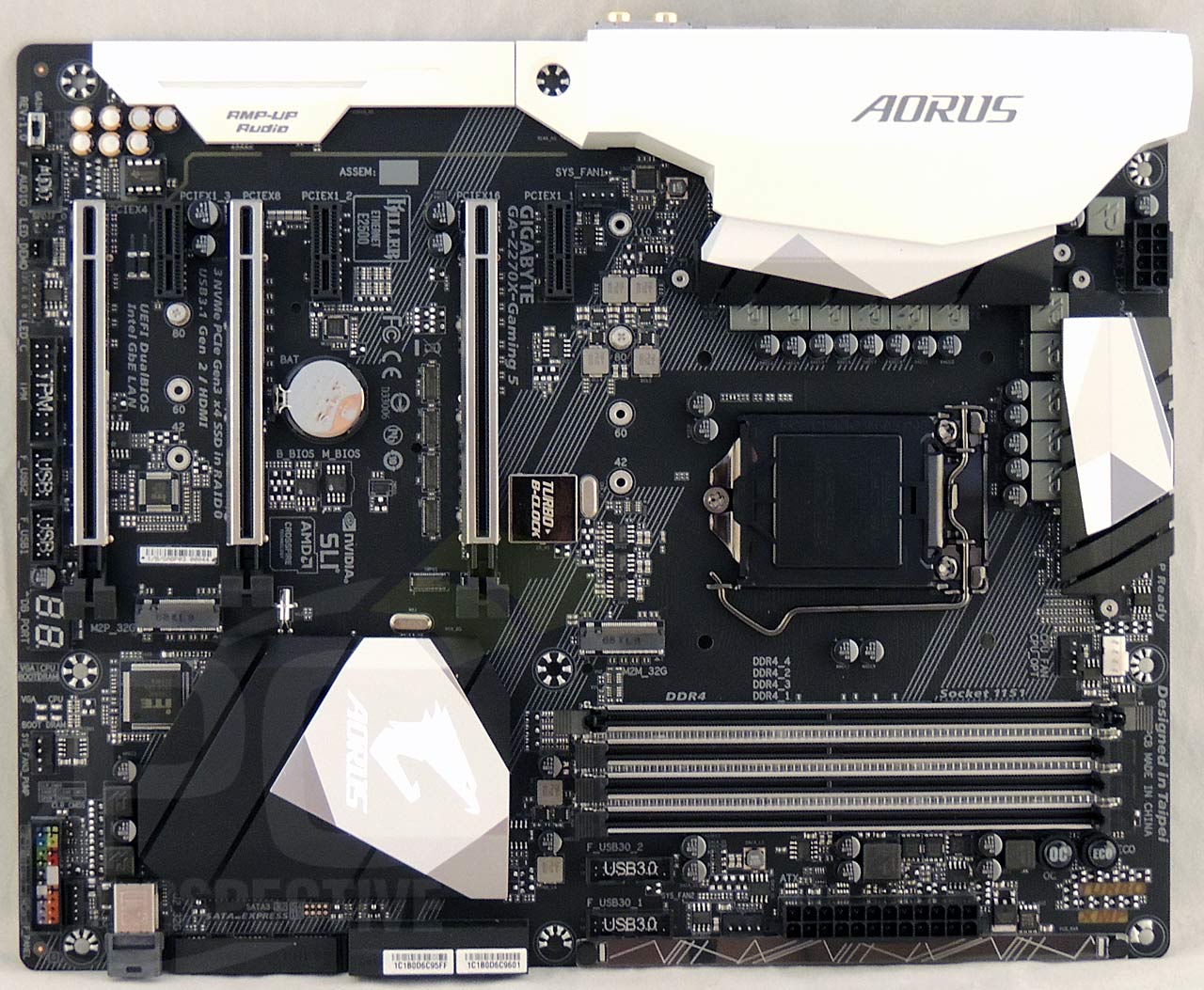 The Z270X-Gaming 5 motherboard features a black colored PCB with black colored heat sinks cooling various on board components and white plastic overlays sitting over the upper VRM heat sink, rear panel components, and audio components. The AORUS series logo displays on a chrome and white plate covering the upper part of the chipset heat sink with the board series logo on the rear panel cover. The board was designed with an ATX form factor for compatibility with most standard-sized enclosures, while providing more than enough surface area for its integrated components. 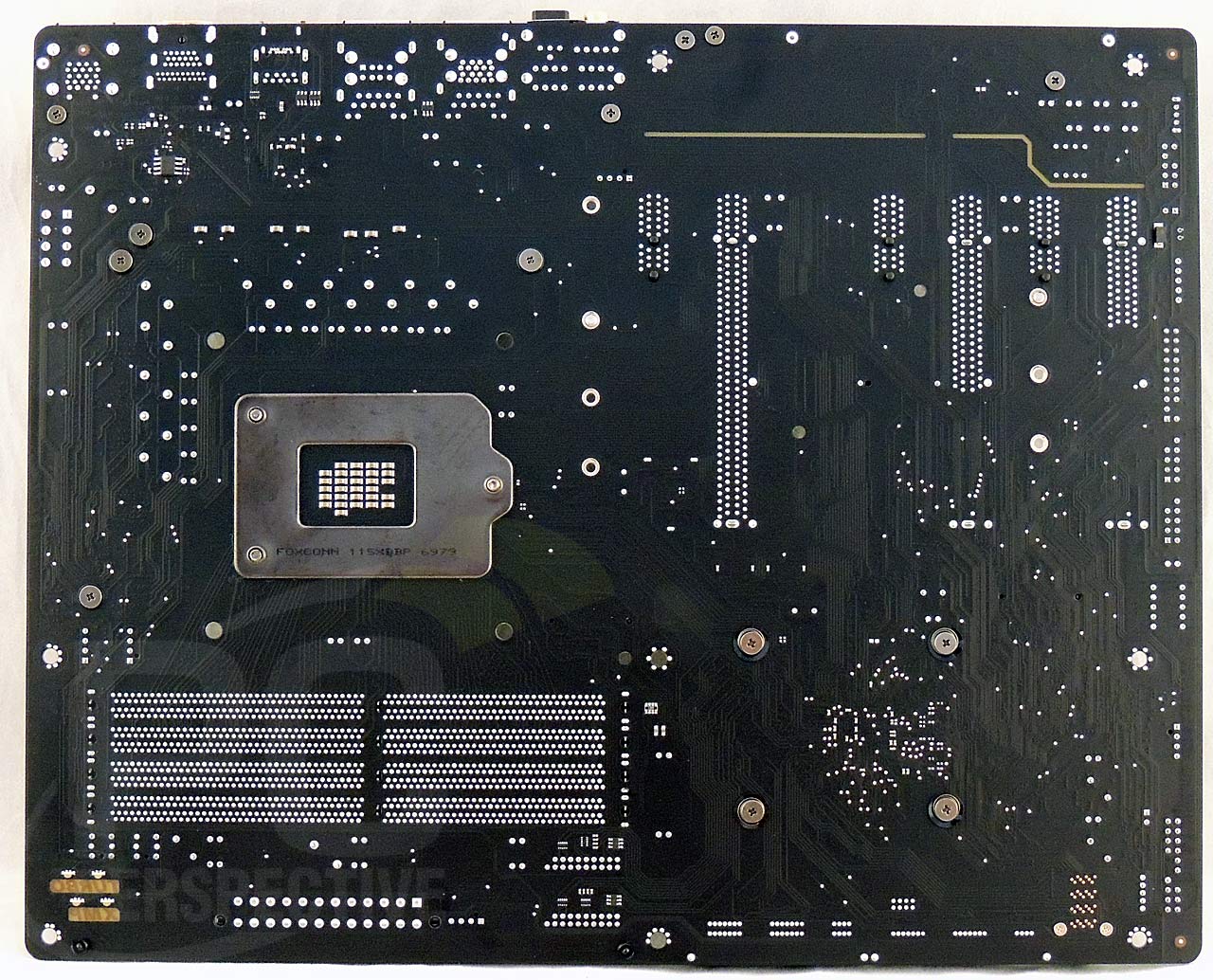 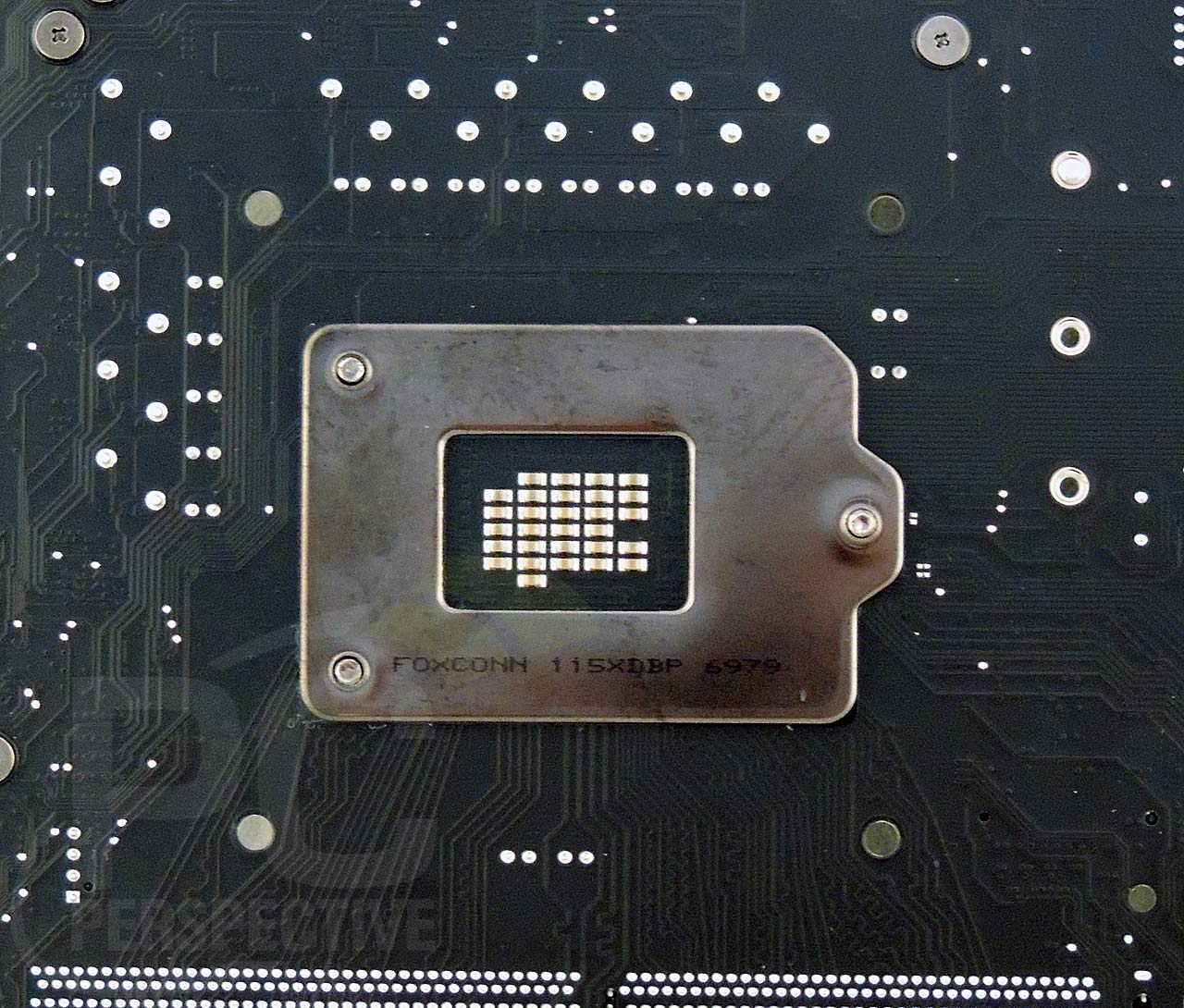 The back of the board almost entirely free of sensitive components, reducing the risk of damaging the board during install into a new case. LEDs are integrated directly into the audio PCB separator line and into the lower portion of the board by the DIMM slots to illuminate the Turbo XMP labels on the board front. The area surrounding the CPU is completely free of components, so there should be no issues encountered mounting any using any cooler back plates onto the board.

The Z270X-Gaming 5 motherboard has the following ports integrated into its rear panel assembly: a PS/2 keyboard/mouse port, four USB 2.0 ports, two USB 3.0 ports, two USB 3.1 ports (1 Type-A and 1 Type-C), dual RJ-45 ports – one tied to the Intel I219-V controller and the other to the Rivet Networks Killer E2500 controller, a DisplayPort video port, an HDMI video port, an optical audio port, and five analogue audio ports. All blue colored USB 3.0 ports are controlled by the Intel Z270 controller. The red colored type A and type C USB 3.1 ports are controlled by the ASMedia USB controller. 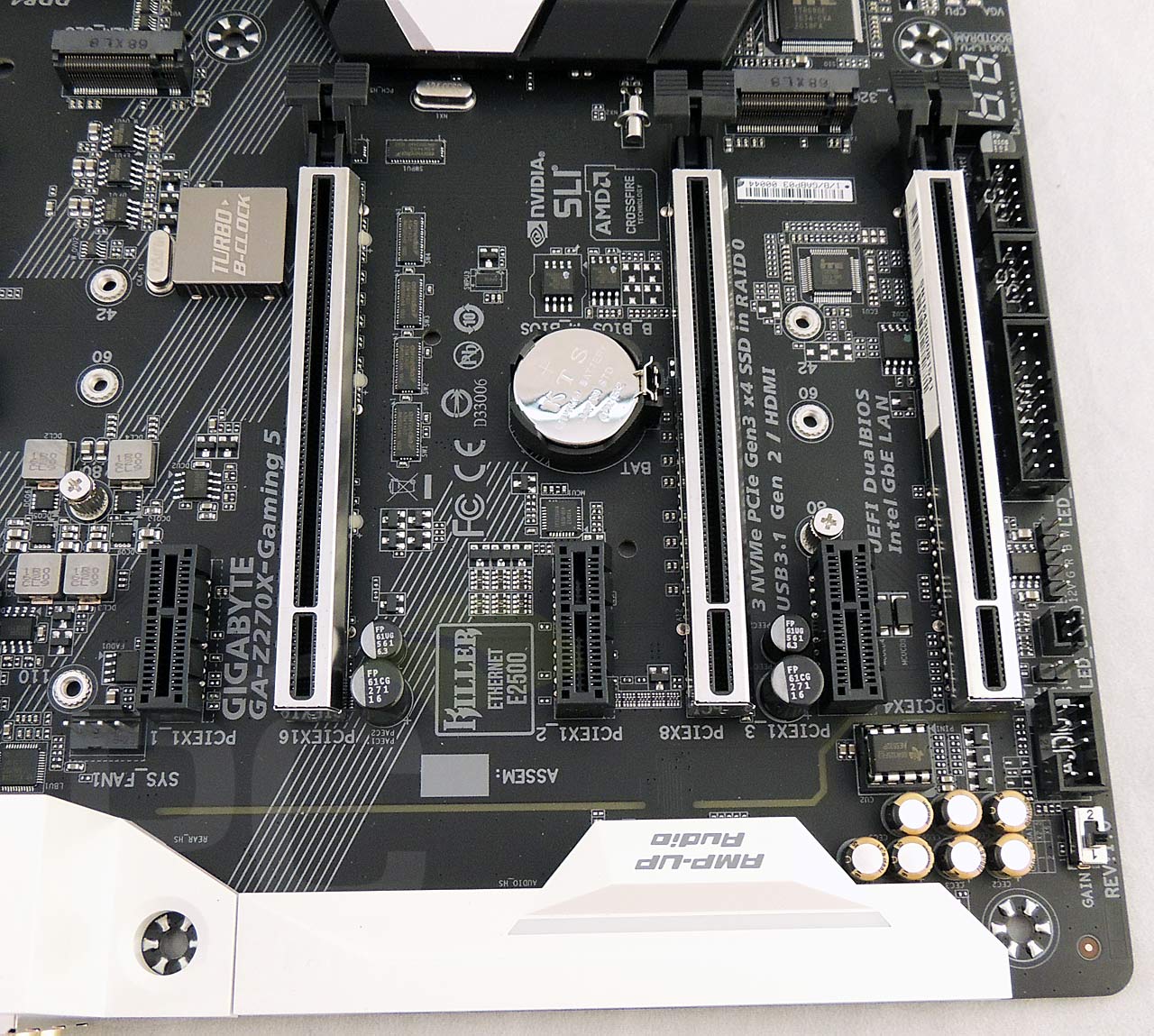 The Z270X-Gaming 5 motherboard has a total of six PCI-Express device ports – three PCI-Express x16 slots and three PCI-Express x1 slots. All three PCIe x16 slots have been reinforced with metal overlays to increase the slot strength and prevent board warping with PCIe video card seated in the board with the board in a vertical orientation. The slots also have LEDs integrated along their outer edge with illumination mode and color matching that of the other board LEDs. For the PCI-Express x16 slots, the board supports full x16 bandwidth with a single card, x8 / x8 bandwidth with dual cards, and x8 / x8 / x4 with three cards. Note that PCIe x16 slot 3 shares bandwidth with the secondary M.2 slot (located to the upper left of the chipset heat sink). The bandwidth for that slot is reduced to x2 speed with an M.2 device inserted into the shared M.2 slot.

The board's integrated audio components live on an isolated PCB to minimize line-noise and distortion caused by other integrated components. The PCB separator line contains embedded RGB LEDs with illumination mode and color matching that of the other board LEDs. GIGABYTE designed the audio subsystem with a removable OP-AMP socket and an audio gain switch, in addition to the normal front panel audio and S/PDIF output headers. The audio gain switch is set to a 2.5x gain setting by default (1) and a 6x gain setting with the switch in the (2) position. By default, the board ships with a TI NE5532 OP-AMP chip installed into the audio's socket. 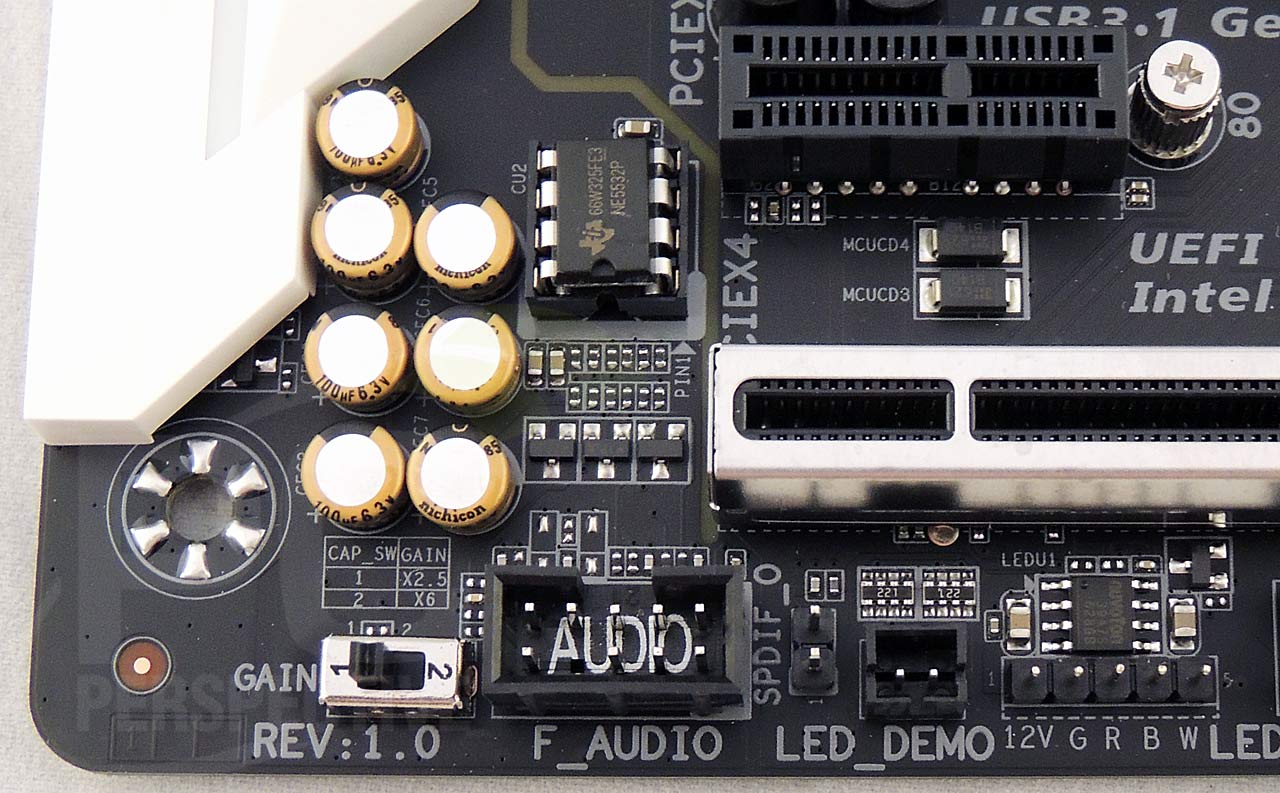 In the upper left corner of the board (and along the outer edge of the PCIe x16 slot 3) are the audio gain switch, OP-AMP socket, front panel audio header, the SPDIF output header, an LED debug header, and the RGBW 12V LED header. The 5-pin LED header supports use of either a 4-wire RGB LED strip or a 5-wire RGBW strip with the board. 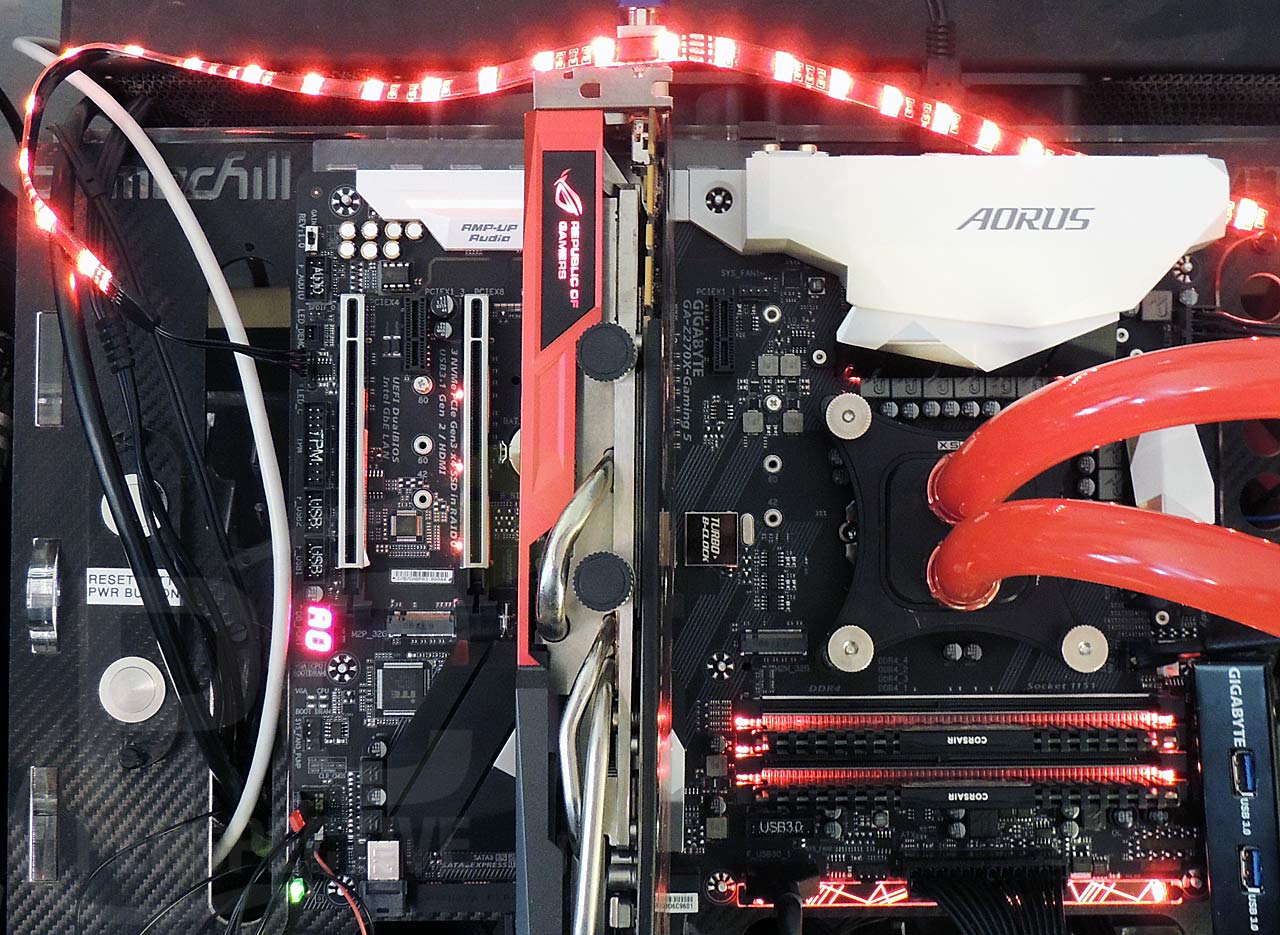 Connecting an RGB / RGBW LED strip to the RGBW 12V header synchronizes the LED strip color and activity with that of the motherboard's integrated LEDs. In the screencap, an RGB cable is connected to the RGBW 12V header. The diagnostic LED display can be used in conjunction with the table provided in the user manual to identify and troubleshoot board boot-related issues. 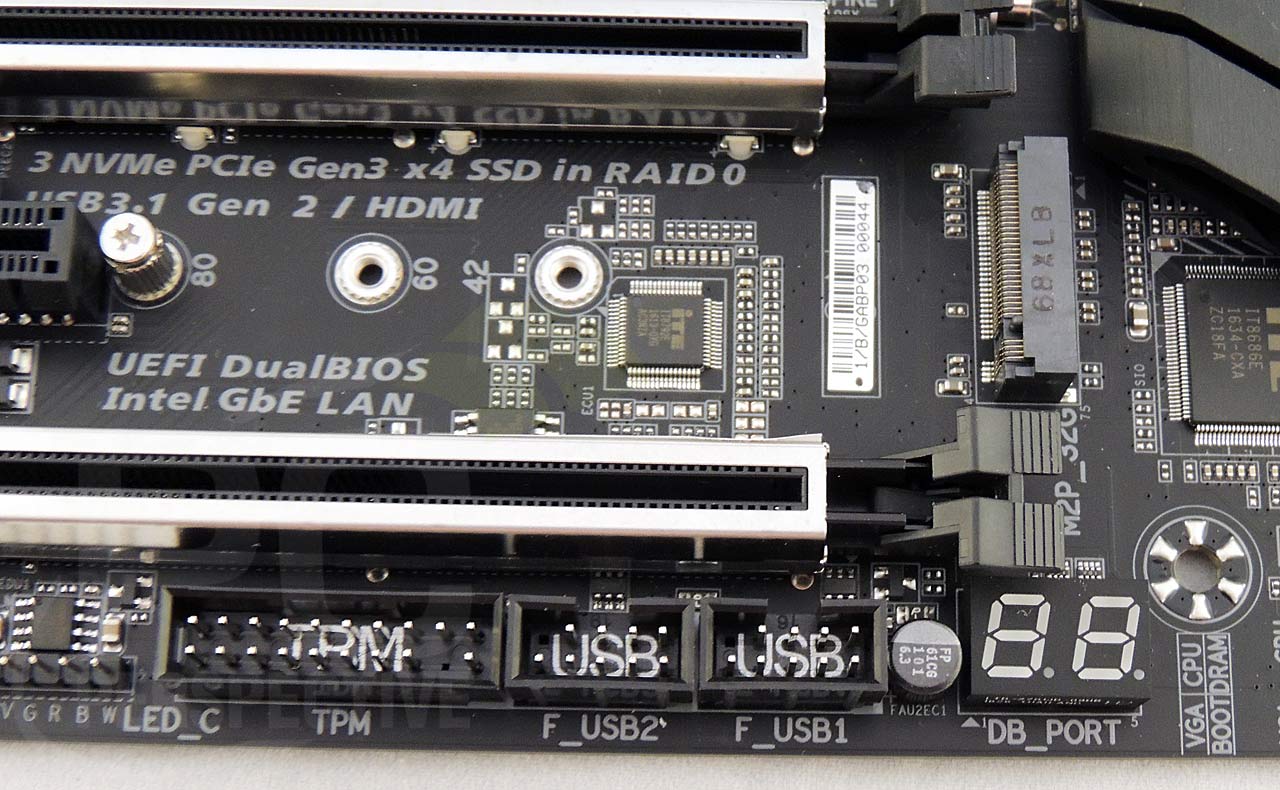 The trusted module header, two USB 2.0 headers, 2-digit diagnostic display, and PCIe x4 M.2 slots are located along the lower edges of the tertiary PCIe x16 slot. The M.2 port supports M-Key style M.2 SSDs with PCIe or SATA interfaces with length of up to 80mm. The M.2 port supports PCIe x4, PCIe x2, and SSD style M.2 devices. Note that the M.2 slot shares bandwidth with SATA port 0 and PCIe x16 slot 3. SATA port 0 may be disabled and PCIe x16 slot 3 bandwidth is reduced to x2 (from x4) with an SSD installed to this M.2 slot. 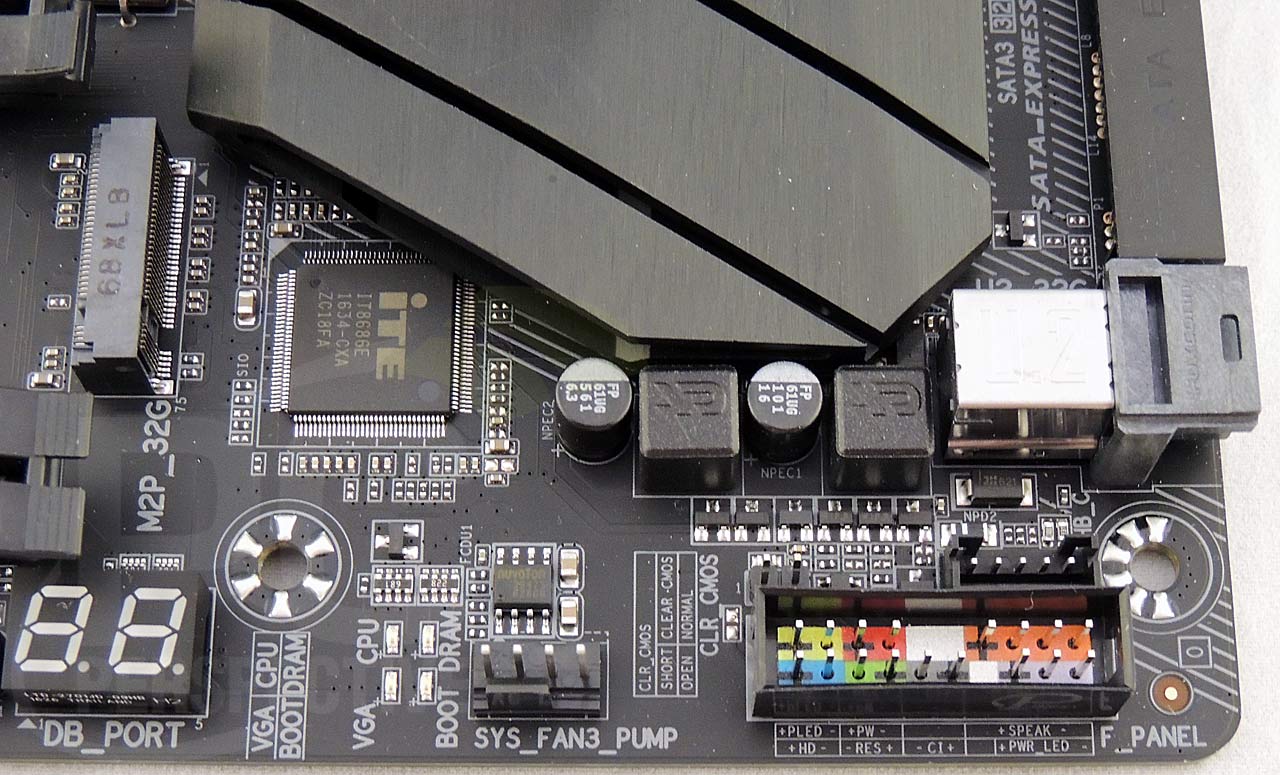 In the lower left corner of the board are a system fan header, the front panel header, the CMOS clear jumper, and the Thunderbolt 3 add-in card header. 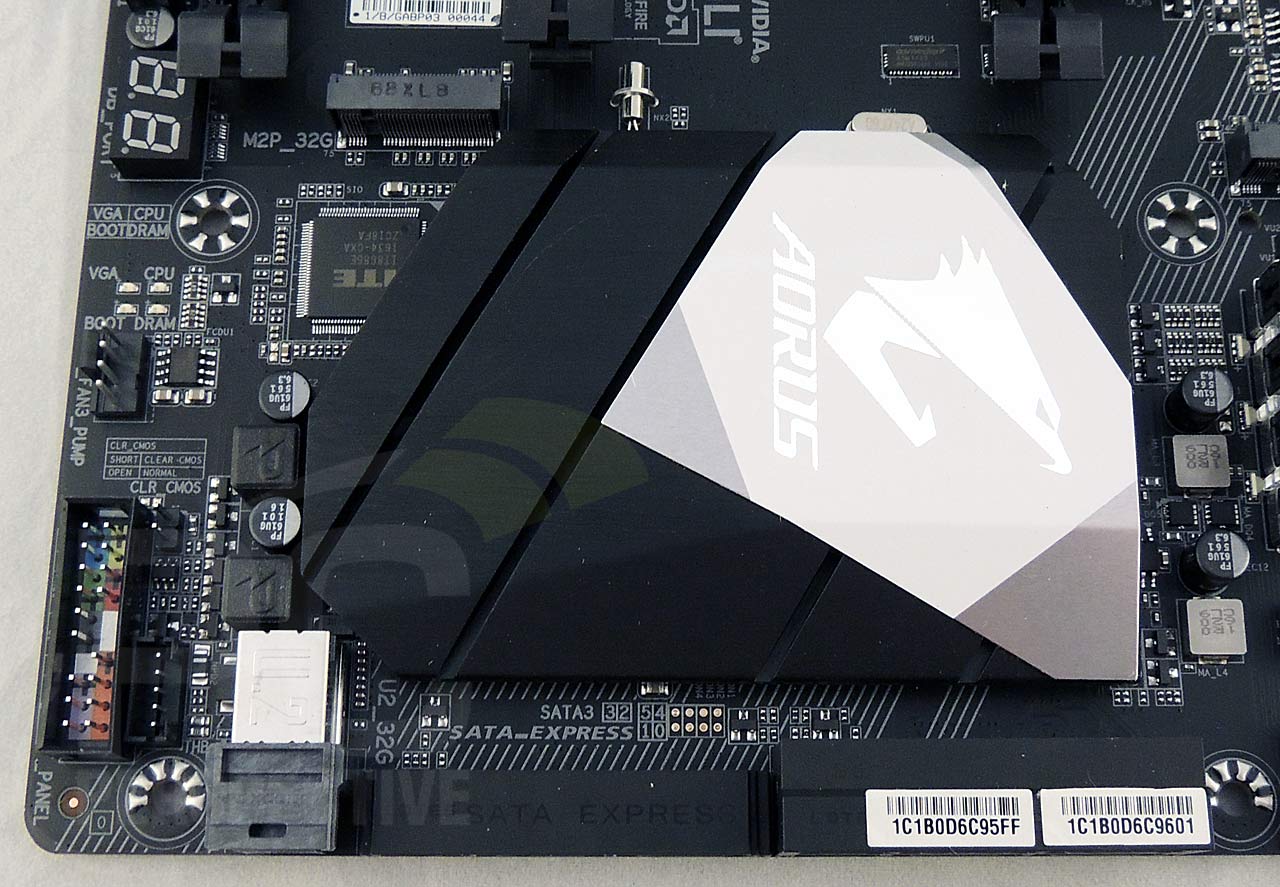 The Intel Z270 chipset is cooled by a low-profile black heat sink with a chromed AORUS series logo.

GIGABYTE integrated a total of three SATA-Express 10 Gb/s ports and a PCI x4 NVMe capable U.2 device port into the board's port block. The SATA-Express ports house two SATA 6 Gb/s ports each that can be used as stand alone ports as well, adding an additional six SATA 6 Gb/s ports to the board. All SATA-Express ports are tied to the Z270 controller. Note that SATA port 0 (lower right SATA-Express port) shares bandwidth with the secondary M.2 slot (located in between PCIe x16 slots 2 and 3). The primary M.2 slot (located to the left of the CPU) shares bandwidth with SATA ports 4 / 5 (lower left SATA-Express port). SATA port 0 is disabled when a PCIe x2 or x4 M.2 SSD is installed into the tied port, while SATA ports 4 / 5 are disabled when any type of M.2 SSD is installed into the tied port. 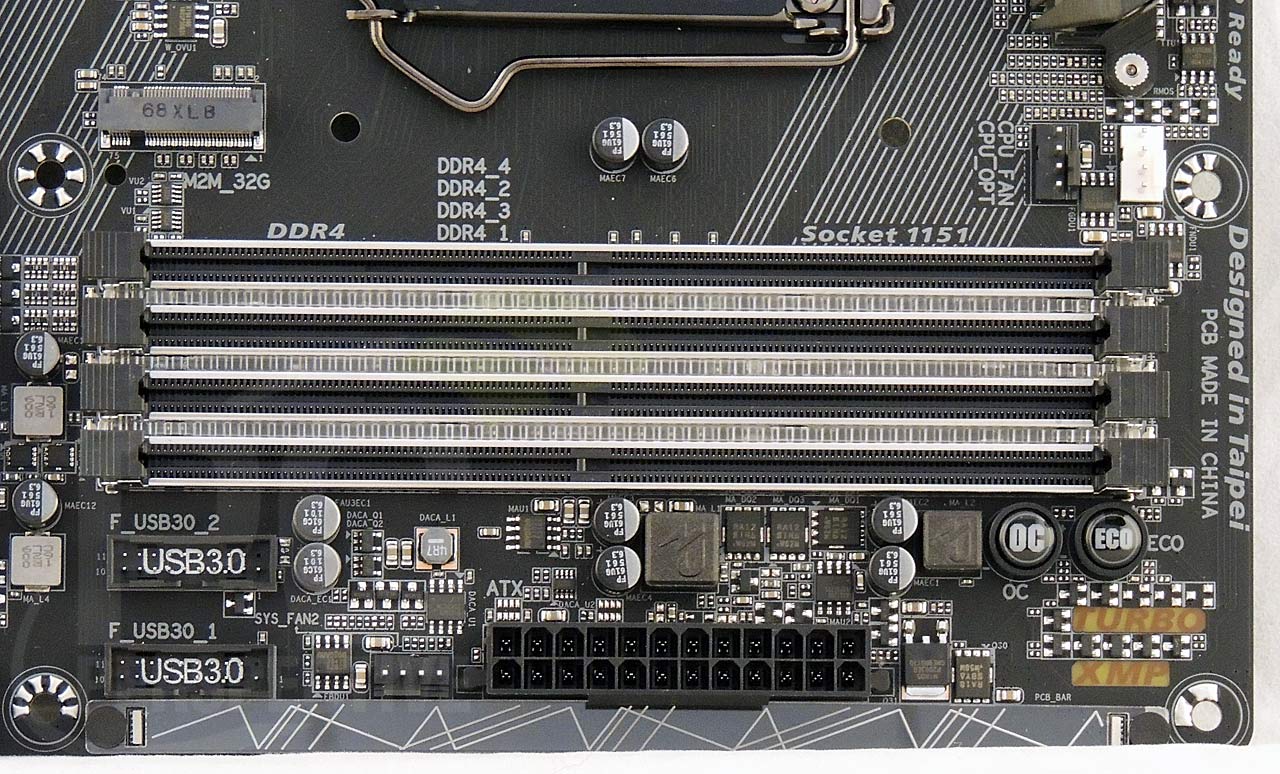 The four on-board DDR4 memory slots are located just below the CPU socket in the lower right quadrant of the board. Dual Channel memory mode is enabled by seating memory modules in slots 1 / 3 or slots 2 / 4 with slots 2 / 4 being the primary memory slots. The board supports up to 64GB of memory running at a maximum speed of 4200MHz. Note that memory speeds above 2400MHz are considered overclocked speeds and are outside of the official Intel stock memory speed specifications. In between the memory slots are LED strips that glow red when the board is powered. Directly below the memory port block are multiple USB 3.0 / 3.1 Gen1 headers, the 24-pin ATX power connector, and a 4-pin system fan header. To the upper right of the DIMM slots are CPU primary (CPU_FAN) and secondary 4-pin fan / power headers. The line and logo directly below the DIMM slots glow when the board is actively powered, in line with the LED settings in the UEFI. 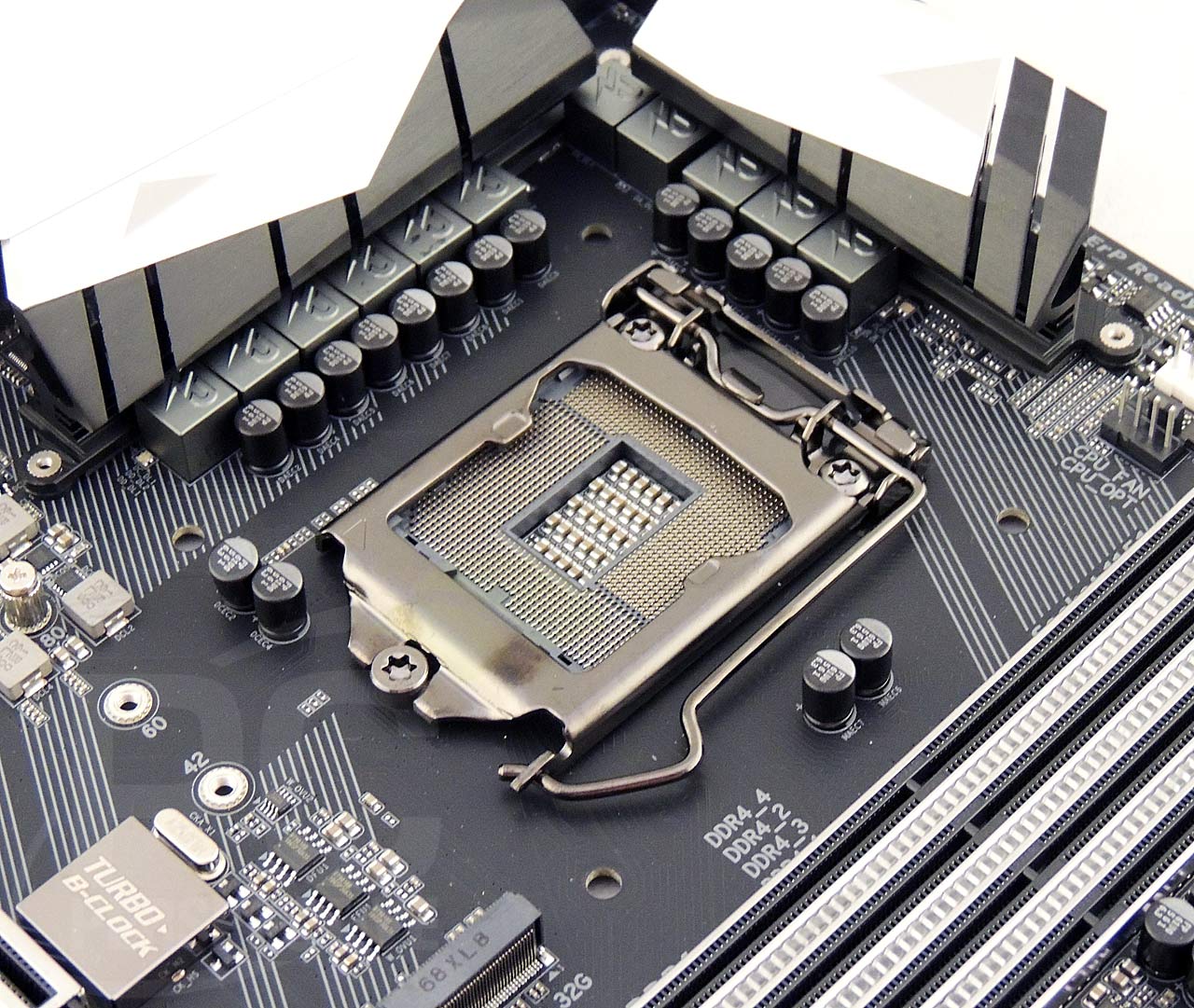 The CPU socket area is clear of obstructions allowing for use of most coolers without issue with the board. The board was designed with eleven power phases for CPU and integrated GPU power delivery requirements, providing sufficient power for most overclocking. The VRMs are cooled by large heat sinks to the upper and right sides of the CPU socket. 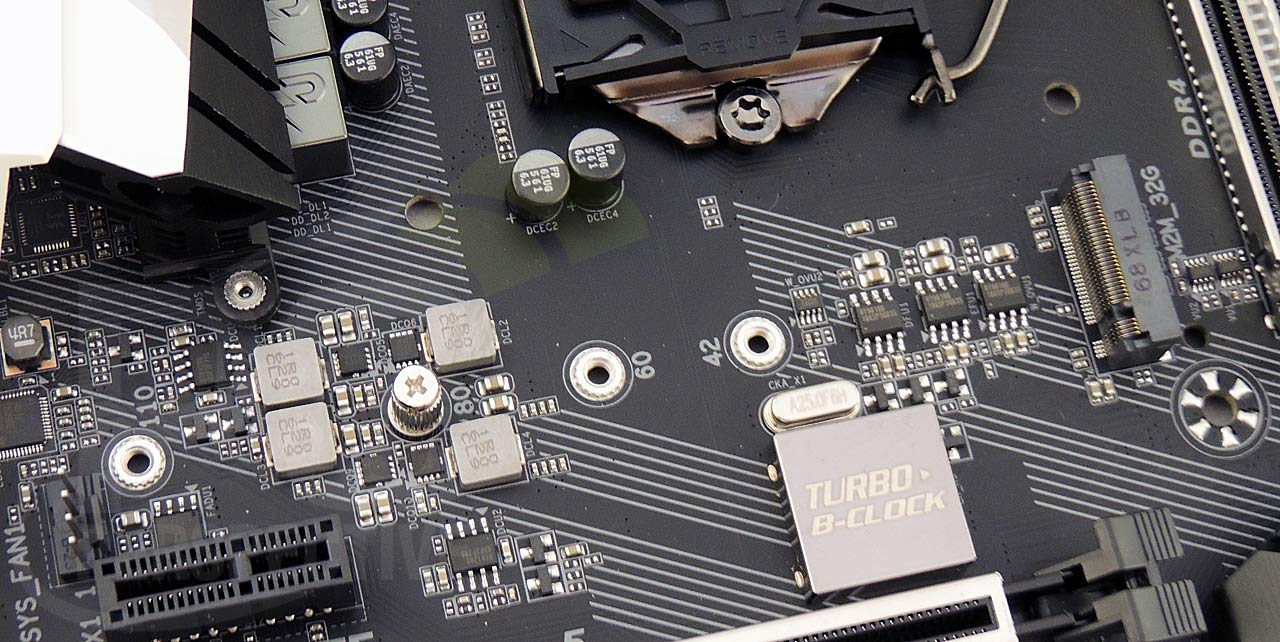 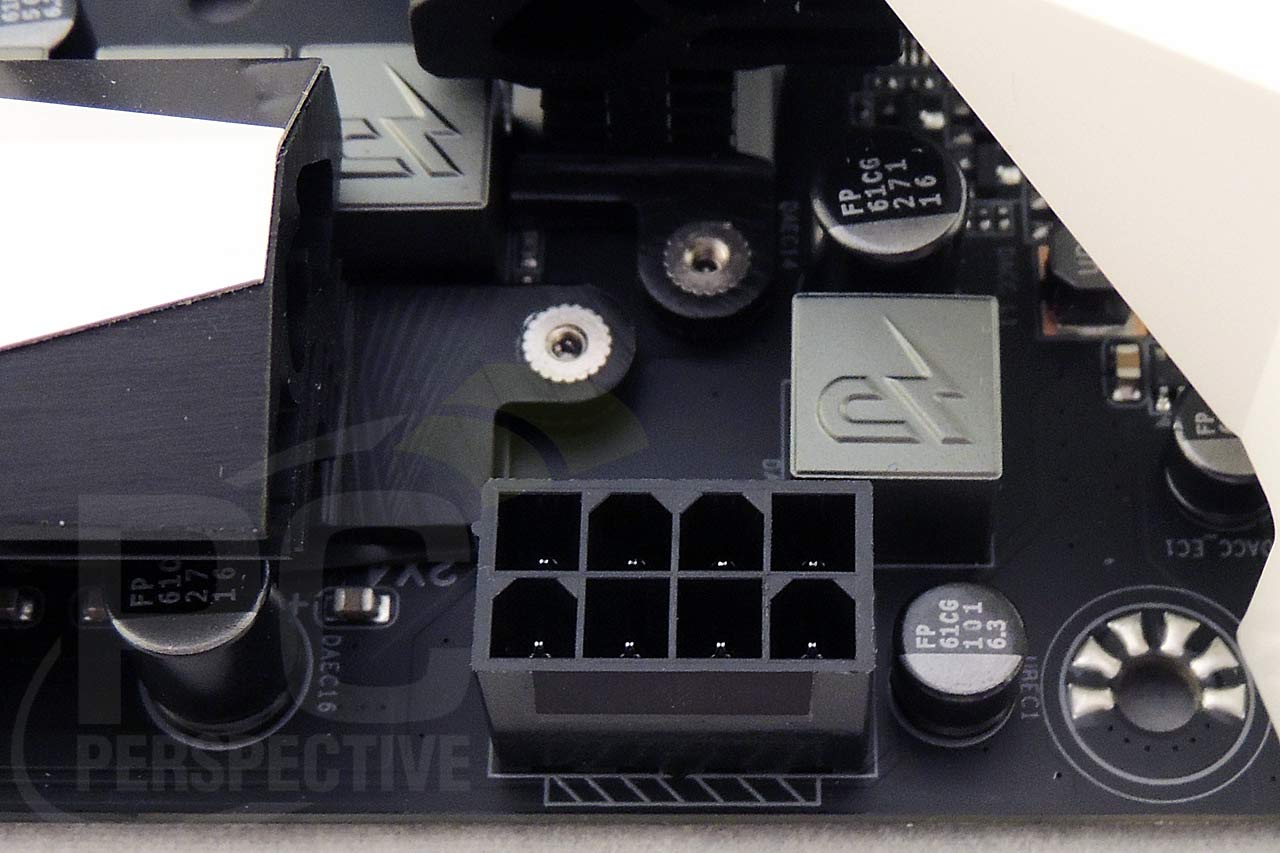 A single 8-pin ATX12V power connector is included for additional CPU power, positioned to the upper right of the CPU socket along the edge of the board.

The Maximus III Gene is a real charmer