After sliding the top half back on and re-attaching the feet, the build is done and ready for an OS. 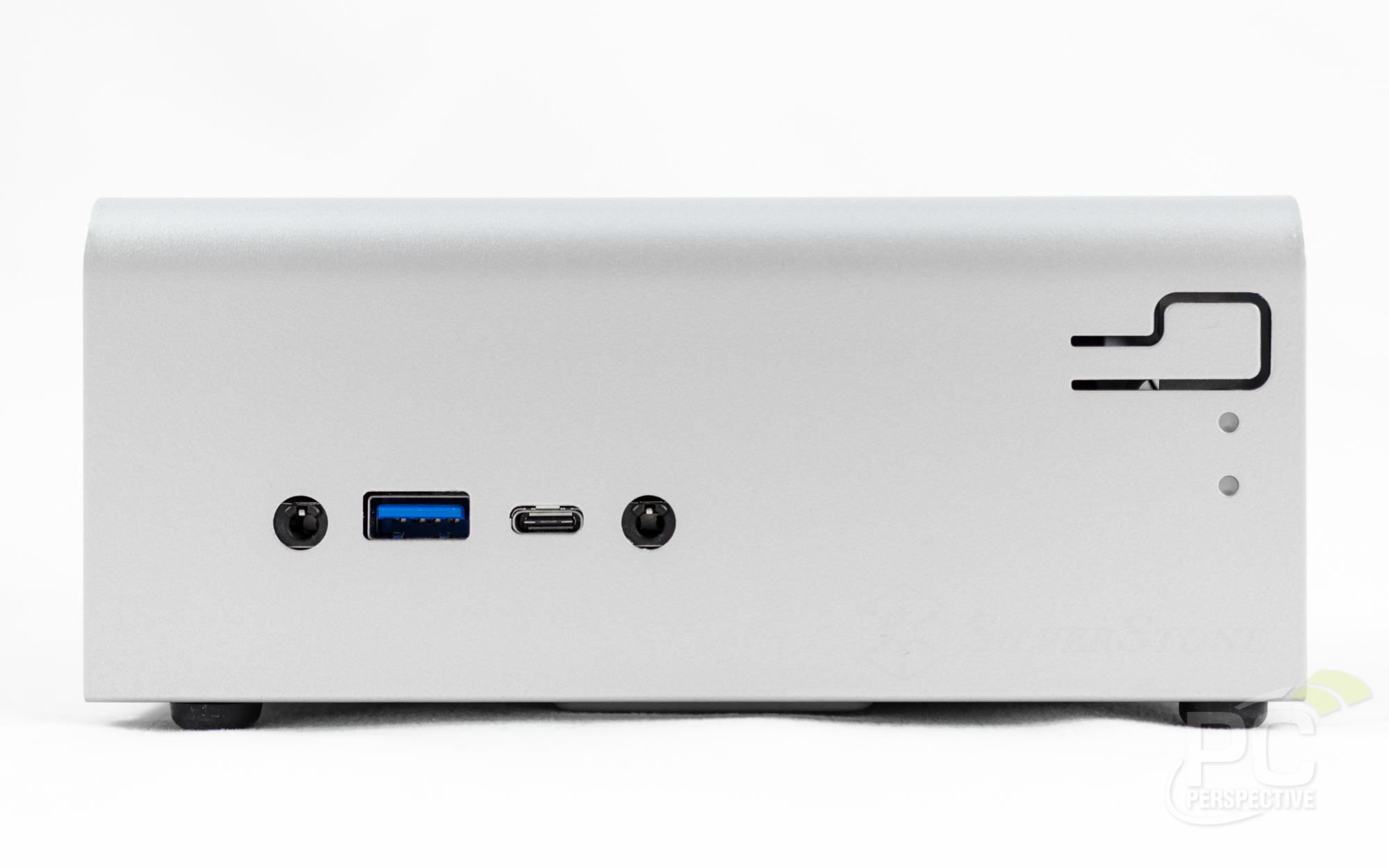 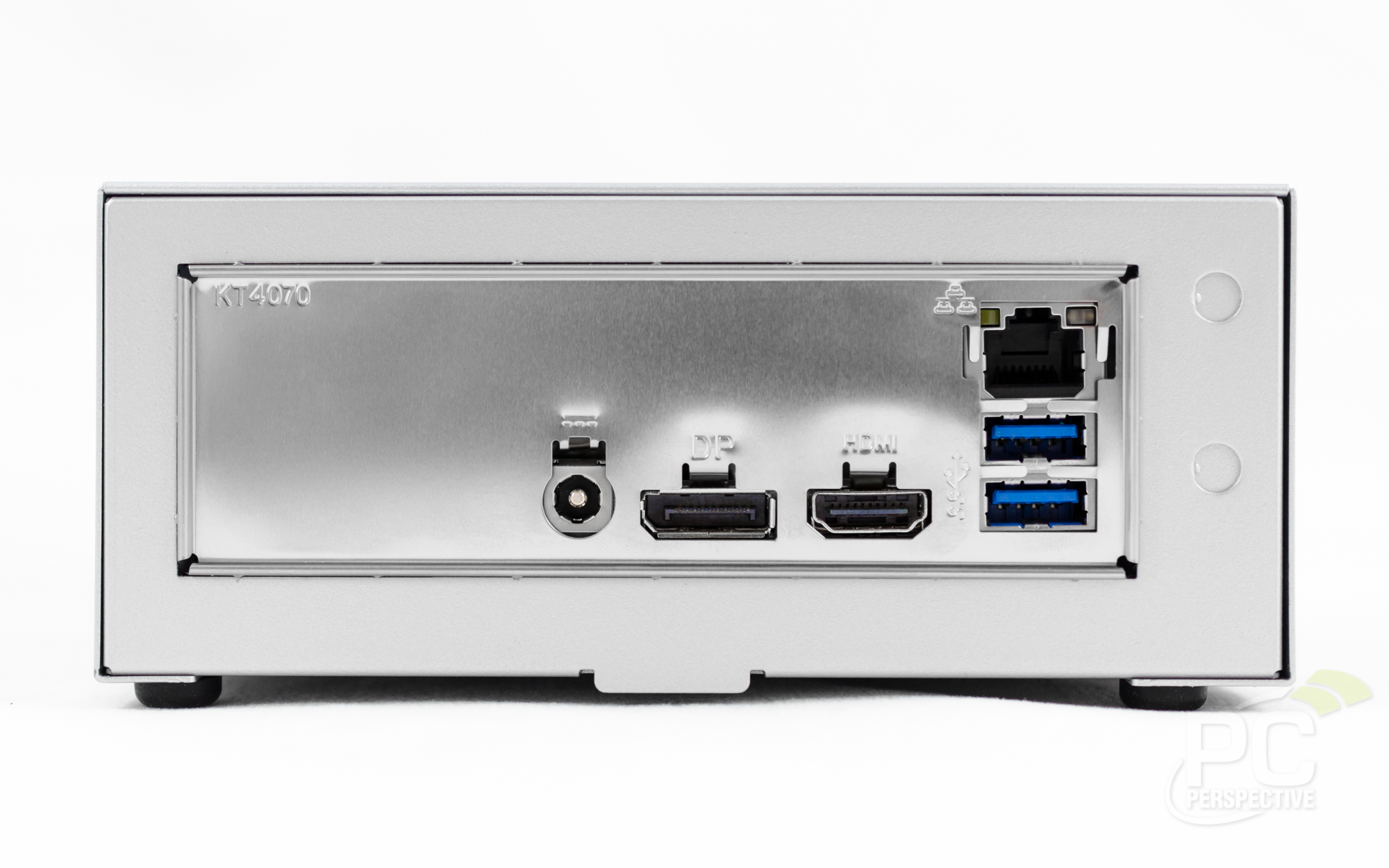 Looking at the completed system from the front and rear reinforces that there is pretty a minimal amount of I/O from mini-STX, and while competitor's boards do not fare any better, I would really like to see a couple of additional USB ports on the back at least. A USB hub of some kind is probably essential with a system like this. 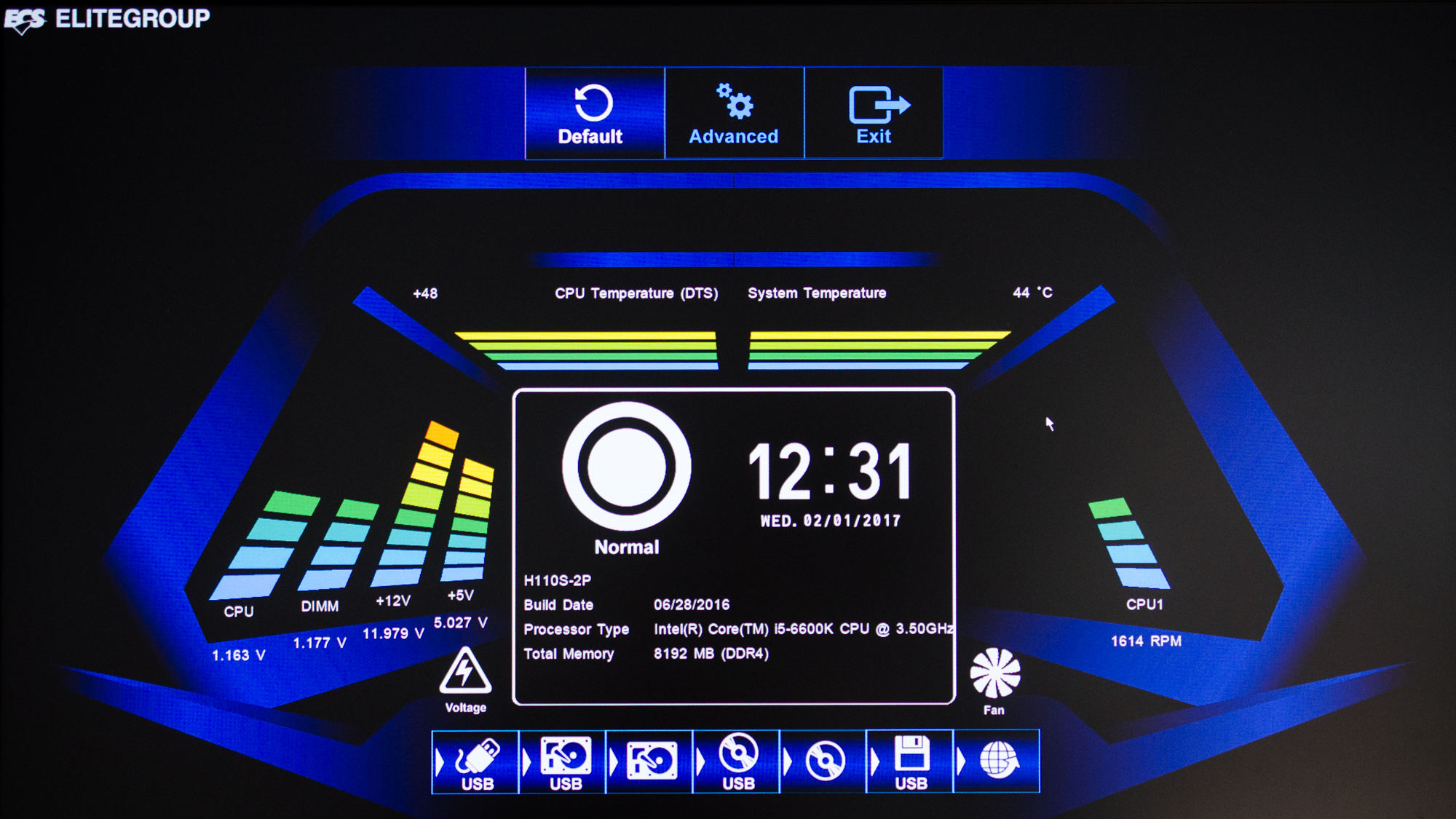 After installing Windows on my Samsung SM961 (NVMe) drive without issue, I used the system exclusively for a few days. All of my PC-based work (photo editing, word processing, etc.) was done on the system without a problem, and considering the i5-6600K processor and fast SSD, this came as no surprise. Stability throughout was perfect, but I wanted to stress the system to see how it held up with my 91W processor and that ultra-low-profile CPU cooler.

There are three basic fan presets available from the ECS system setup, along with the option of selecting custom settings. I ran benchmarks with the CPU fan at the normal, quiet, and silent presets, and recorded the temperature and noise results. Load temps were generated using the x264 benchmark, and temps were taken using HWMonitor. 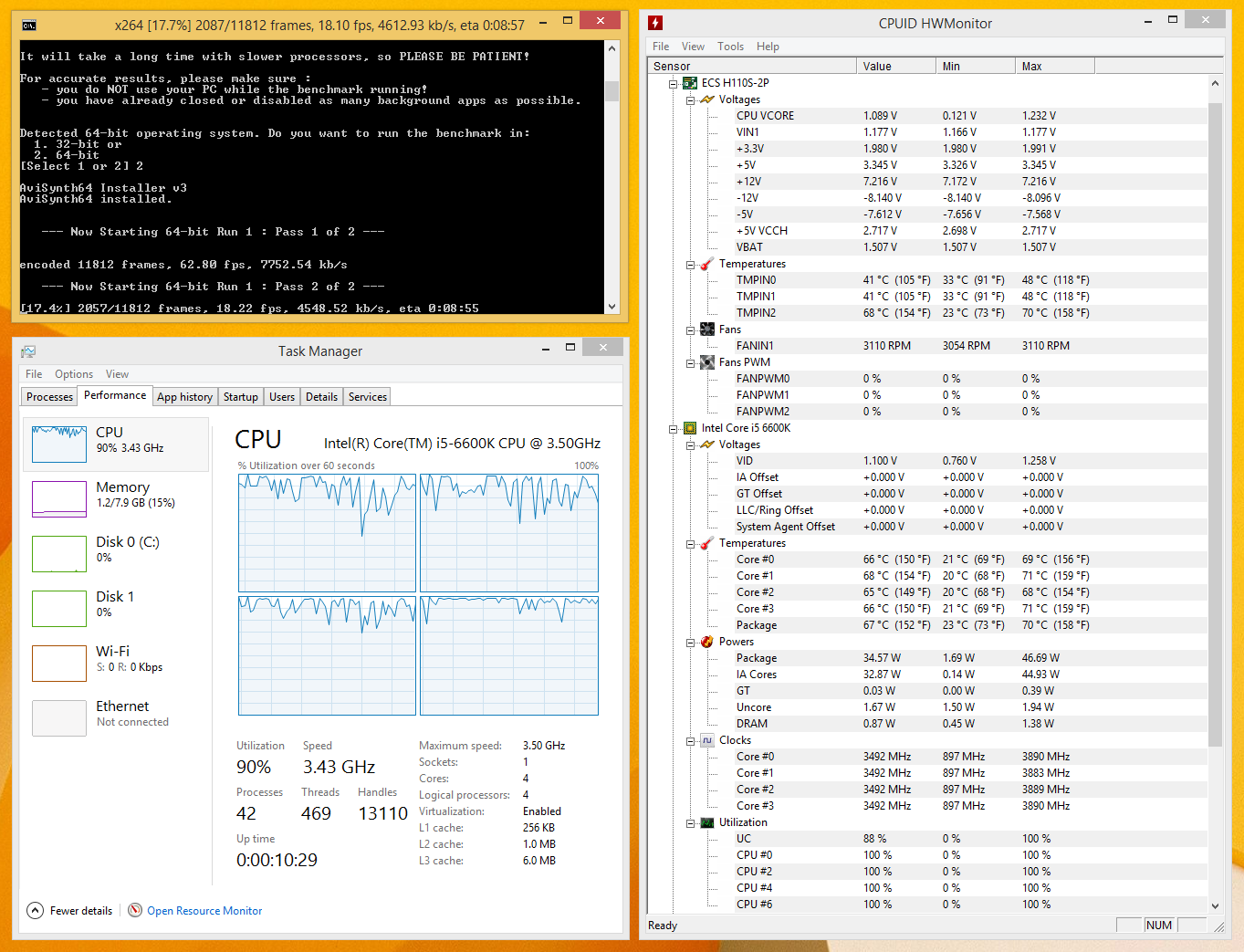 The image above is the result of the x264 benchmark with the 'normal' fan setting, which had the CPU cooler's 80 mm fan spinning at over 3000 RPM. This generated pretty noticable noise, though not particularly high on the SPL meter, as you will see. Max load temps from the Core i5 CPU are still OK at 70 C (15.9 C ambient), and the system was stable through multiple benchmark runs. Moving down to the 'quiet' fan preset resulted in loads of 73 C (15.9 C ambient), but the 'silent' preset resulted in a failure to complete the benchmark as the CPU began to throttle a few minutes in. (A more typical workload never saw temps near 70 C with any fan setting.)

As to noise, the NT07-115X cooler produced less than I was expecting from its 80 mm fan. 'Silent' measured 33.4 dB (my noise floor), and was inaudible with anything else running in the room. 'Quiet' (my pick for best mix of performance and noise) was just 34.1 dB, and 'normal' reached 37 dB. These numbers were pretty constant, with little variance based on load.

The power requirements will be familiar if you've looked into thin-mini-ITX at all (I opted for a 90W, 19v adapter), and while I thought I would be able to use the same power adapter from my last ultra low-profile PC build (way back in 2014), that was not the case. It turns out the laptop-style power supplies that worked for thin mini-ITX do not work with mini-STX. The reason? The outer/inner diameter of the plugs are different! (For reference, mSTX requires 5.5 mm OD/2.5 mm ID, while thin mini-ITX uses a larger 7.4 mm OD/5.0 mm ID.) The one I picked up was around $10, though I fear for its overall quality.

With my standard x264 CPU benchmark the peak power draw at the wall during any of the runs was 76.4 W, though power was typically much lower (in the 50 – 60 W range for the most part), and I measured idle power at 12.5 W. I think it is safe to assume that my $10 power supply might not be particularly efficient, and the overhead thus entailed surely resulted in lower numbers actually reaching the system. But I wasn't finished, deciding to risk it and test the full power of my i5-6600K by using the Prime95 torture test; a venture that filled me with anxiety as I really didn't want to blow up my PSU or exceed the 65W-rated power delivery of the motherboard.

After running Prime95 for a couple of minutes I reached this peak draw from the wall: 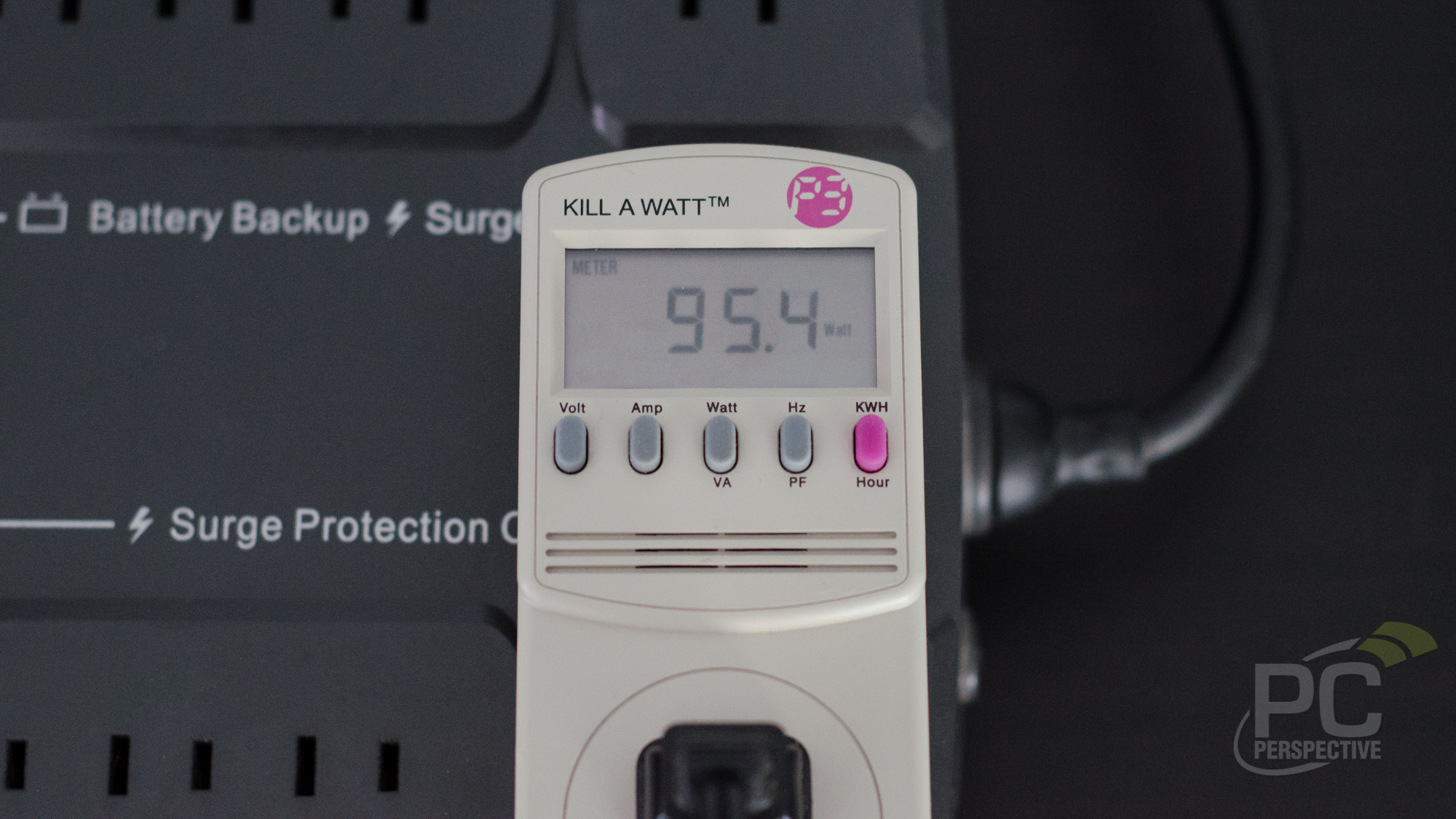 Yikes! Still, as I have no idea what the actual efficiency of the power supply is, I can only guess that fewer watts than the 95.4 W peak observed were actually reaching the motherboard. However, I did not experience any instability or errors from the Prime95 test, though the CPU began throttling down at intervals by about the 2 min mark of any Prime95 run (but I was using a 23 mm cooler!). 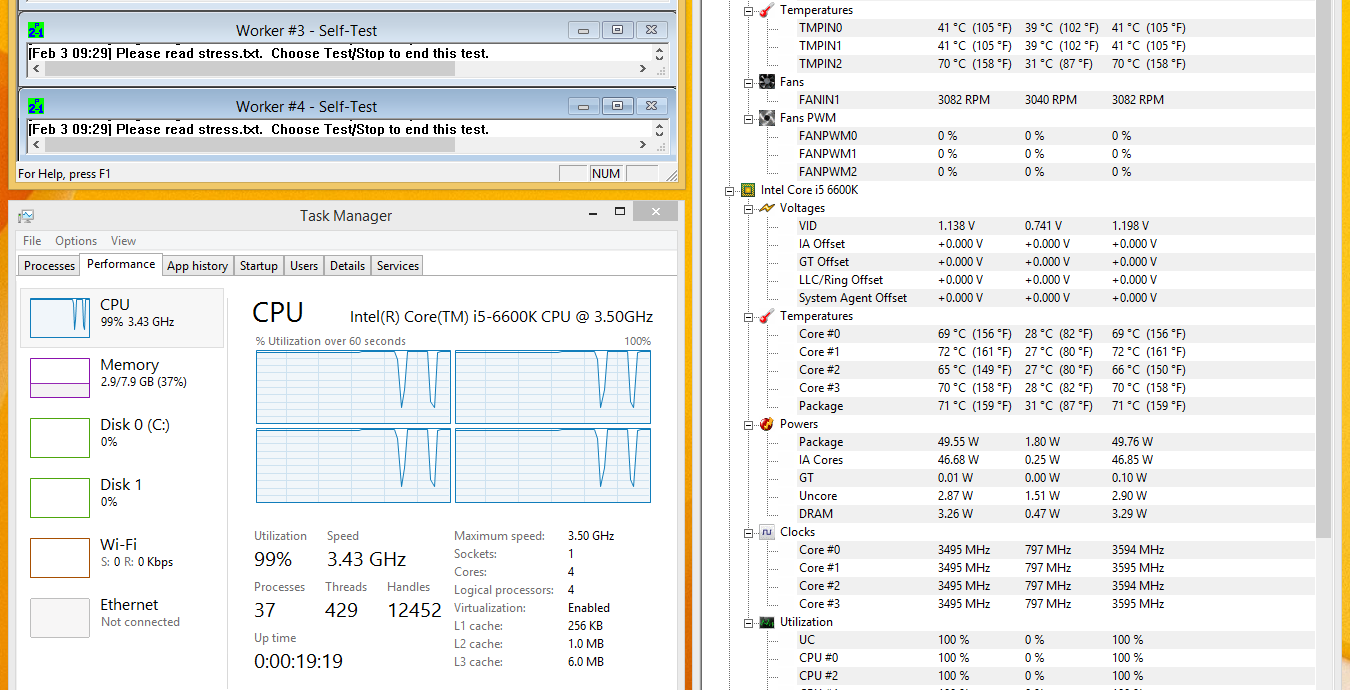 While the need for mini-STX as a form-factor might seem tenuous, consider that what it's really offering is not a replacement for mini-ITX systems, but an alternative to pre-built mini-PCs. The ability to select a desktop-class processor transforms mini-STX from what would be a mere novelty into a legitimate productivity platform. Other mini-PC platforms such as the Intel NUC and Apple's Mac mini use lower-powered mobile CPUs, and of course do not offer an LGA socket for an upgrade path.

Another aspect of mini-STX to consider is value, as a mini-STX motherboard sells for around $80 (though this ECS design is not available in the U.S. currently), and the featured SilverStone VT01 case is only $30. A low-profile CPU cooler adds $20, brings this initial investment to $130, which leaves a lot of room for CPU, RAM, and storage purchases before reaching, for example, the $499 level of the bottom-tier Apple Mac mini; and the mini would be woefully outmatched against a desktop-class build. (In this example, in a Geekbench 64-bit test my i5-6600K build scored 4810 single, 13261 multi, while the current base Mac mini is just 2796 single, 5354 multi.) 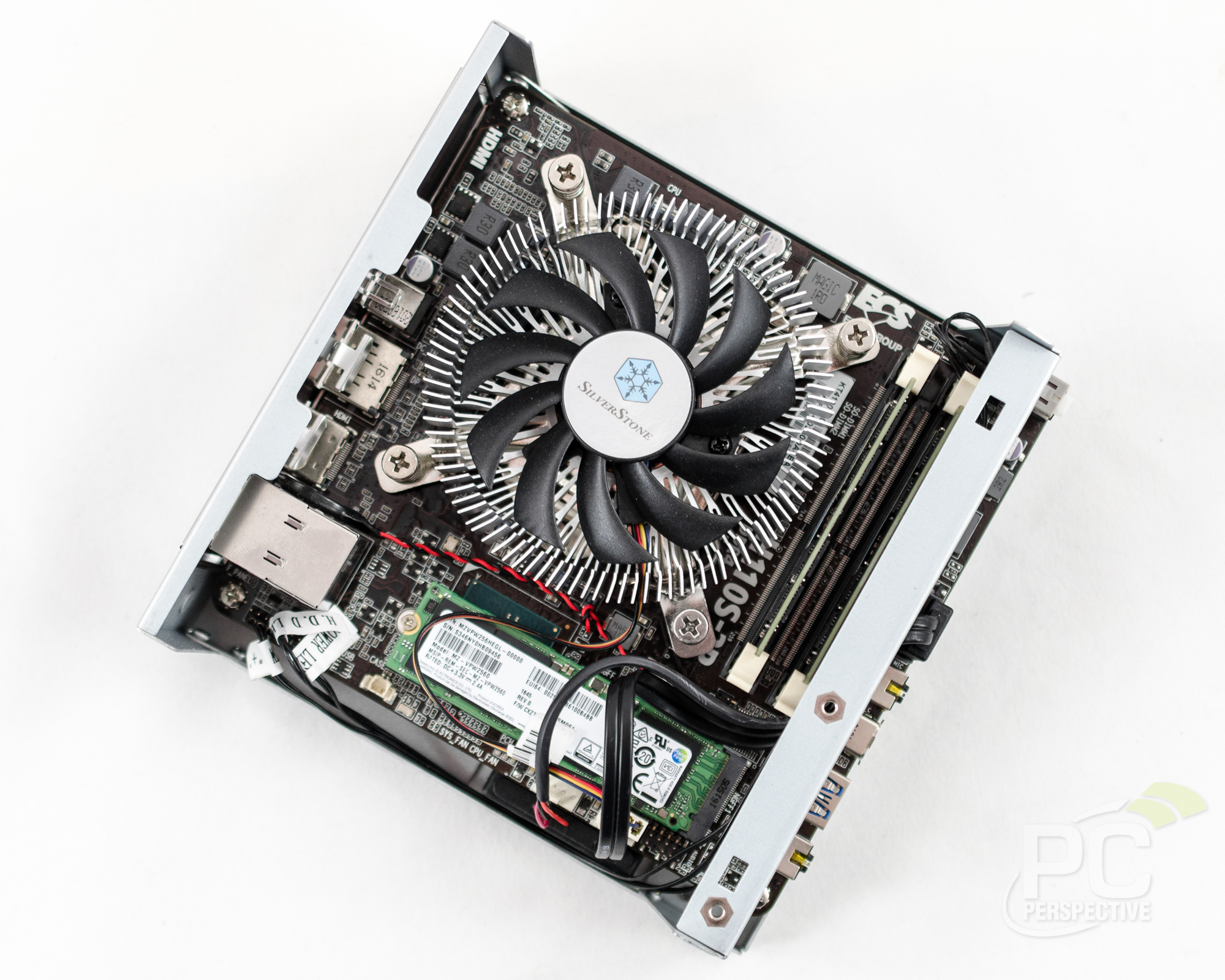 Overall I was very impressed with the quality of the components in this mini-STX build, with the ECS motherboard offering stable performance and the SilverStone case providing an attractive home for this tiny system build. This VT01 enclosure was very easy to work with and, while quite simple, was nonetheless very well constructed. I will point out that, while excellent for its size, the NT07-115X has some competition from SilverStone itself, who also offers a slightly larger (33 mm) mSTX-specific NT08-115XP, which would likely offer better cooling.

I was very impressed with the stability and overall quality of the ECS H110S-2P motherboard, and I find it an easy recommendation if it is available where you live. The SilverStone VT01 case is very well designed and built, and offers an attractive home for a mini-STX build with excellent ventilation, though it will need to be dusted out periodically as there is no screen filter. Overall I liked both of these products very much (and was very impressed by the ultra-low-profile NT07-115X cooler), though the actual need for mini-STX (other than an alternative to mini-PCs) has yet to be proven.

I gave both the ECS H110S-2P and SilverStone VT01 our silver award, and if you have interest in this new form-factor these products are a great place to start. 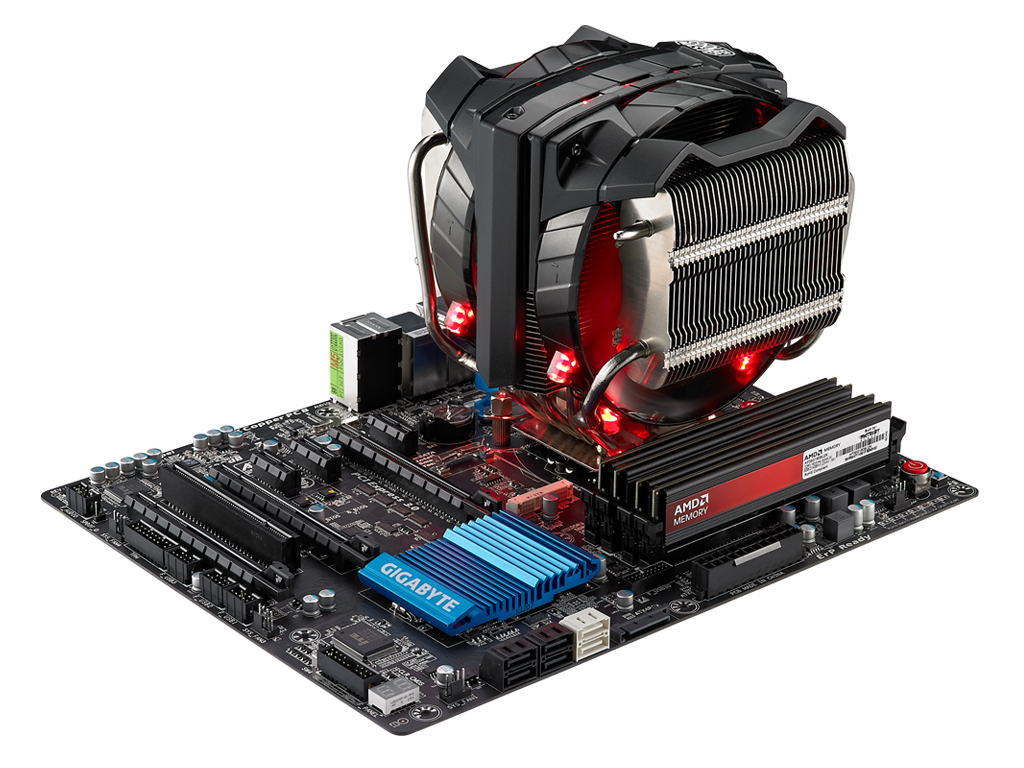