AMD had a hard time keeping up with demand, especially for the higher clocked K6 233.  All was not rosy though.  The K6 166 and 200 had the split 2.9v/3.3v power plane that was not officially supported on many current boards that could handle the older Pentiums.  The current Pentium MMX of the time had a 2.8v/3.3v split, but luckily many of the K6’s could run at 2.8 without many problems.  The k6 233 required 3.2v to run at that speed.  That was a pretty uncommon voltage setting back in the day, so users typically just ran 3.3v.  This helped to make the K6 233 a pretty warm chip, but it also had pretty respectable overclocking potential at the time. 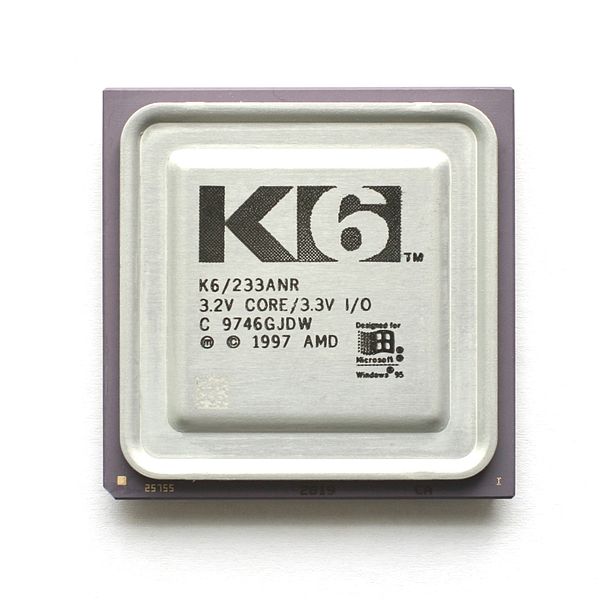 The K6 was a good design that provided excellent performance for the price.  The Pentium II was a good design as well, but the new slot mechanism and the backside L2 cache made it a much more expensive CPU to manufacture.  Unfortunately for AMD, while the K6 supported MMX, it had a non-pipelined FPU that could not keep up with the older PMMX or the PII.  It also had a design that did not scale entirely well with clockspeed.  AMD was behind Intel when it came to process technology and it was quite some time before AMD could utilize the 250 nm process for the K6.  During this time Intel continued to introduce new Pentium IIs and the new Celeron chips that would challenge AMD at the low end.

The K6 evolved into the K6-2 and eventually the K6-III.  K6-2 added in the 3DNow! SIMD unit that improved floating point operations coded for it tremendously.  It was released before Intel introduced SSE with the Pentium !!!.  The K6-III added 256 KB of on-die L2 cache.  These improvements kept the K6 series competitive with Intel.  Throw in the “Super 7” infrastructure that AMD championed and consumers had a platform that was up to date along with inexpensive processors that provided some real competition in the marketplace.  Super 7 and K6 had plenty of downsides as compared to Intel, especially in terms of compatibility with cutting edge AGP video cards and some very popular sound cards.

Perhaps what is most important with the introduction of the K6 architecture is that it signaled the start of the highest level of competition from another party that Intel had faced in decades.  From the introduction of the K6 to Intel’s Core 2 we saw a regular pattern of performance and technology improvements from the companies that would leapfrog each other and provide a very exciting and interesting time in the market. 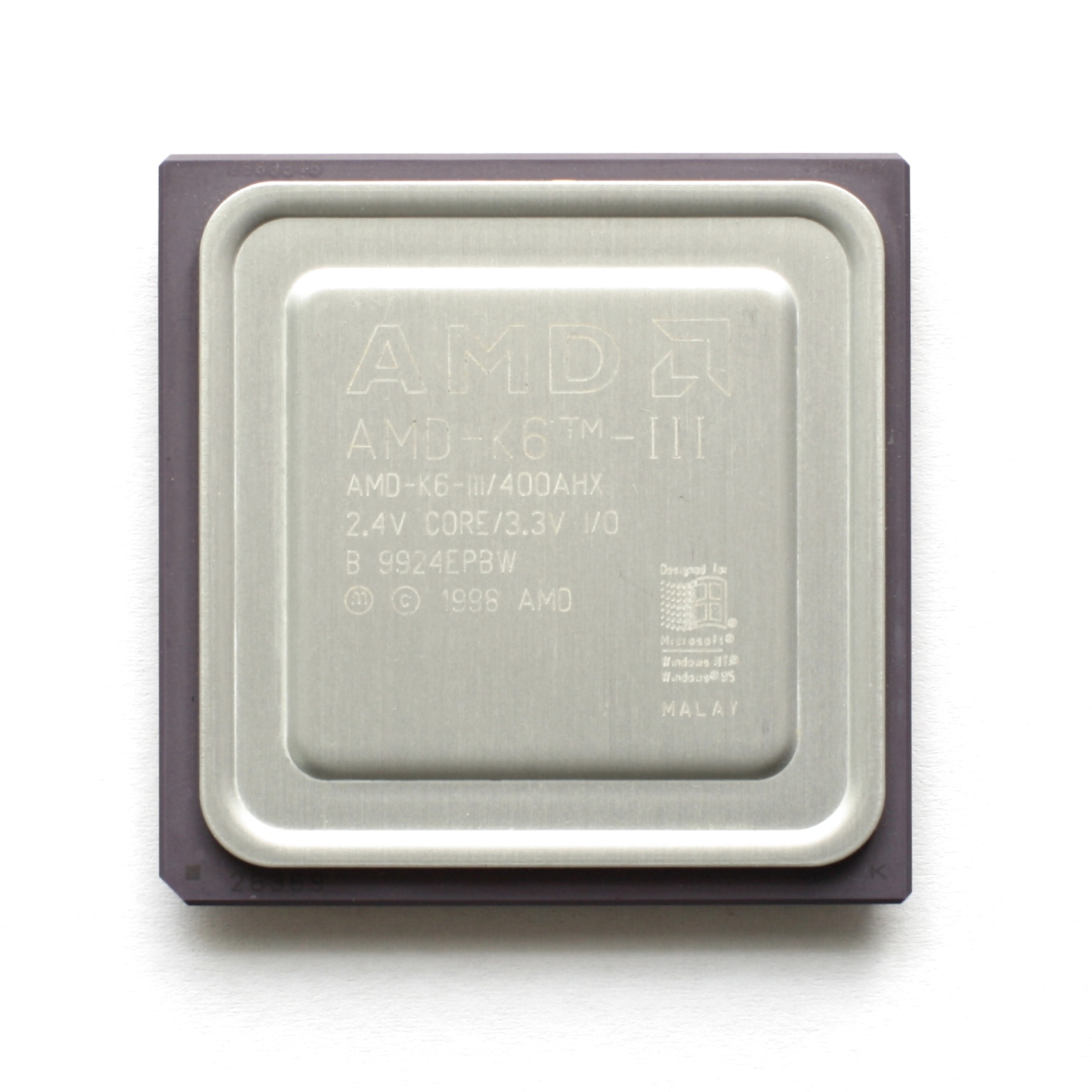 The internal roadmaps at Intel before the introduction of the K6 CPUs were conservative to say the least.  One such product that was scheduled for a 1999 release was essentially a 450 to 500 MHz clocked CPU featuring Katmai technology and potentially having on-die L2 cache.  After AMD released K6 and started making noise about K7 we saw Intel become much more aggressive with speeds, timelines, and features.

If there was one product that launched AMD into a truly competitive position, it was the K7.  Named “Athlon” shortly before launch, it was a CPU that was surrounded by much controversy.  People disliked the name Athlon for a variety of reasons.  Early samples that were leaked to press showed that performance was very poor not only compared to the latest Pentium !!!, but also to the previous K6-III.  AMD was also releasing their own chipset named the AMD 750 “Irongate” which promised a much more compatible AGP 4x slot and a host of modern southbridge features.

This was the first truly superior CPU that AMD was able to produce as compared to what Intel had on the market at the time.  The leaked samples that a few publications were able to lay hands on were partially disabled and did not reflect the performance of the shipping CPU.  The K7 was able to scale in clockspeed better than the Katmai based P!!! so it could hit 700 MHz on their 250 nm process while Katmai could hit 600 MHz on a similar process.  The Athlon also utilized the EV6 bus that had distinct advantages over Intel’s GTL+ bus that was still based on what was introduced with the Pentium Pro. 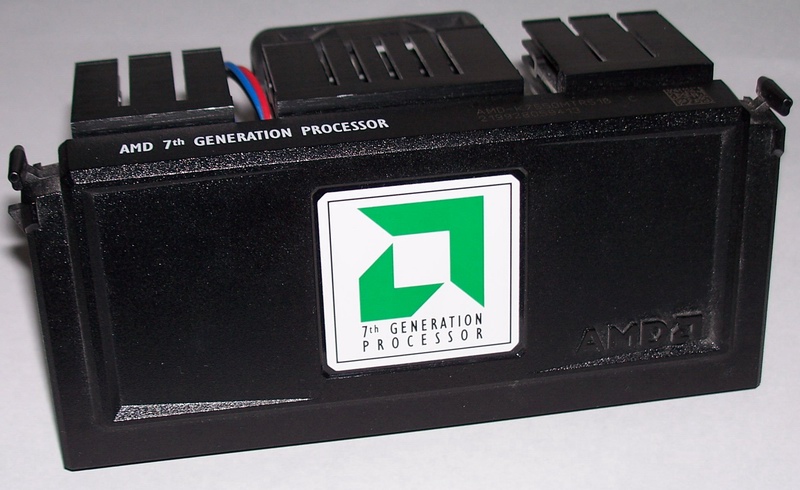 This is not to say that the Intel “Katmai” and “Coppermine” based CPUs were garbage, because they clearly were not.  It was just that AMD was able to match each move by Intel by first taking the Athlon from 250 nm down to the latest 180 nm process, and then by integrating the L2 cache with the Thunderbird cores.  AMD was able to reach 1GHz slightly before Intel did, but due to adverse manufacturing conditions at Intel, AMD supposedly provided several times the number of 1 GHz parts to system integrators than Intel was able to.

During this time AMD was able to increase clockspeeds of their parts and improve their process technology in smaller steps as compared to Intel which would settle on a process and work on making a bigger jump a few years down the line.  AMD never strayed too far from Intel during this time and they integrated new technologies such as copper interconnects before Intel thought it necessary.  AMD often partnered with other semi firms such as Motorola and IBM to develop new process technologies to keep them current and competitive with Intel.

The company also kept relatively current on outside technologies and was the champion of DDR memory.  Intel had gone the Rambus route with the latest chipsets and that decision turned out to be a near disaster.  Performance was not good, latency was bad, and terminator RIMMS had to be used.  The cost of RAMBUS parts was also significantly higher than current SDRAM.  Intel supported a memory translation module to enable SDRAM support, but that had a tendency to cause memory corruption.  AMD released the AMD760 northbridge that provided the first DDR support in the industry.  Memory was initially expensive, but once Intel released details of their own DDR supporting chipsets 3rd party memory production ramped up and prices fell well below RAMBUS based RIMMS.

AMD continued to iterate on the Athlon with improvements in both design and process.  Thunderbird evolved into Palomino which was named the Athlon XP.  This chip was a direct competitor to the new Pentium 4 that was able to scale to higher clockspeeds easier than the Athlon chips were able to.  AMD was mostly competitive with the Pentium 4, but Intel could easily crank up the speed of these products so that they quickly outpaced what AMD had to offer.  Intel moved onto the Northwood core which in my mind was probably the best all around Pentium 4 in terms of power, heat, and overall performance.  AMD was unable to adequately compete there.

The company moved on with their rather lackluster Thoroughbred-A core which scaled slightly higher than the Palomino, but had more than a few teething problems.  AMD fixed these issues with the Thoroughbred-B which allowed them to scale further, be more power efficient, and provide a decent competitor to what Intel had to offer.  The final iterations of the Athlon core came in the form of the Barton and Thorton cores.  Barton provided 512 KB of L2 cache with speeds that matched the earlier Thoroughbred-B cores.  AMD also increased the clockspeeds of its now aging EV6 bus to 166 MHz and 200 MHz.