Times were tough again for AMD with their products being overshadowed by Intel with the latest Northwood based Pentium 4s.  AMD had survived pretty well when Intel had to rely on the very unpopular RDRAM DIMMS for their early Pentium 4s, but that quickly disappeared when Intel started to utilize higher speed DDR memory that had been introduced by AMD and their 760 chipset.  Luckily AMD was not standing still.  Engineers at AMD, including Jim Keller, were developing a new CPU architecture that would integrate northbridge features as well as add 64 bit support via AMD’s x86-64 implementation.  Unlike Intel’s EPIC 64 bit architecture, it was backwards compatible with x86 32 bit computing.  This technology would form the basis for 64 bit computing on x86 for the entire industry.  Until AMD could get this product out, they had to milk every last drop of performance out of their aging Athlon architecture and the EV-6 bus and associated memory technologies. 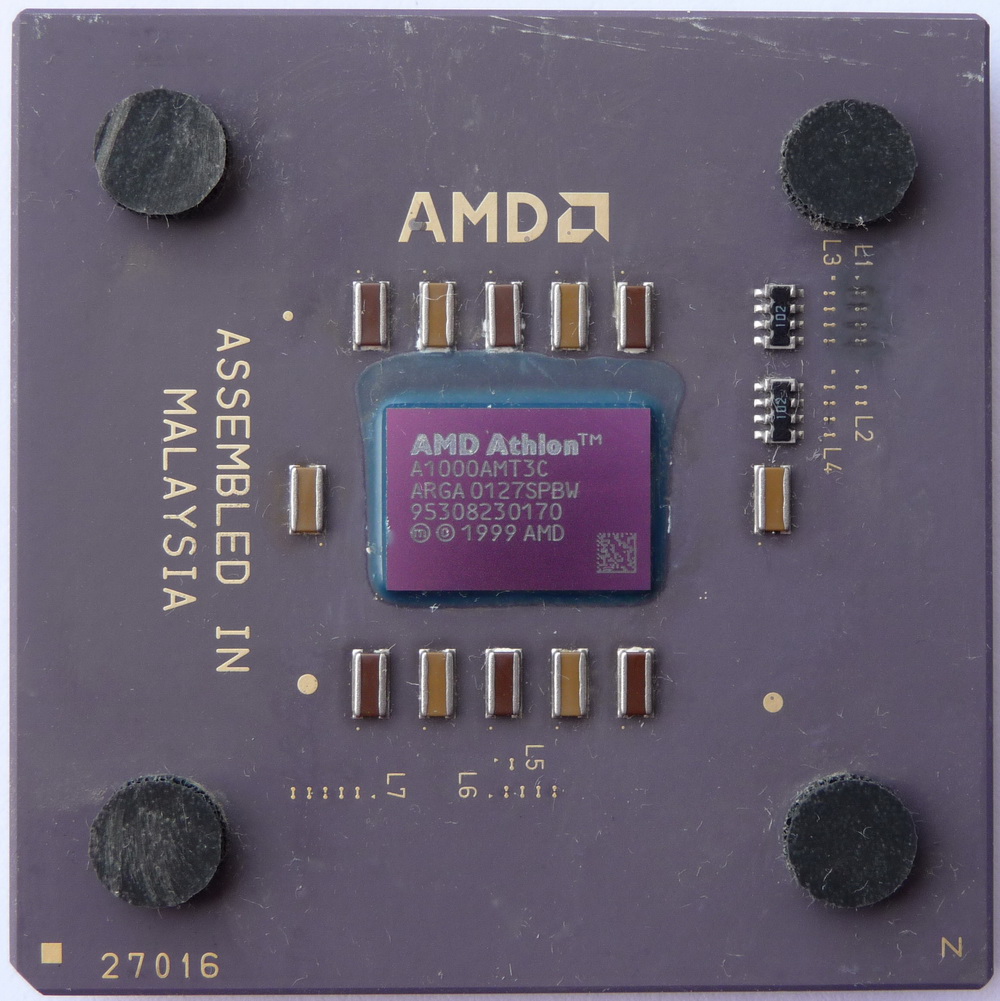 We now come to AMD’s shining moment.  The release of the Athlon 64 in late 2003 marked the most successful and prosperous time for AMD in their entire history.  The Athlon 64 3400+ was initially introduced at 2.2 GHz with the 3200+ at 2 GHz.  These were clocked significantly lower than the competing Pentium 4 processor top end of the time, but they outperformed that product in nearly every way.  The integrated memory controller and the Hypertransport connection to the chipset allowed a tremendous amount of data to be transferred at very low latencies as compared to what Intel could offer.

The architectural advantage was so great that even when Intel switched production to a lower process node, their designs could still not adequately compete with what AMD had to offer.  The Prescott processor was a small step ahead of the previous Northwood core, but it soon gained the reputation for pulling a lot of power and being very hot.  AMD’s chips were more energy efficient and cooler running even using a larger process node.

AMD initially implemented Athlon 64 on socket 754 which limited it to single channel DDR memory.  Even with single channel AMD was able to match and exceed what Intel was able to offer.  They later released the more competent socket 939 products which introduced non-ECC dual channel DDR performance.  AMD continued to provide a superior product to Intel from top to bottom with their Athlon 64 architecture. 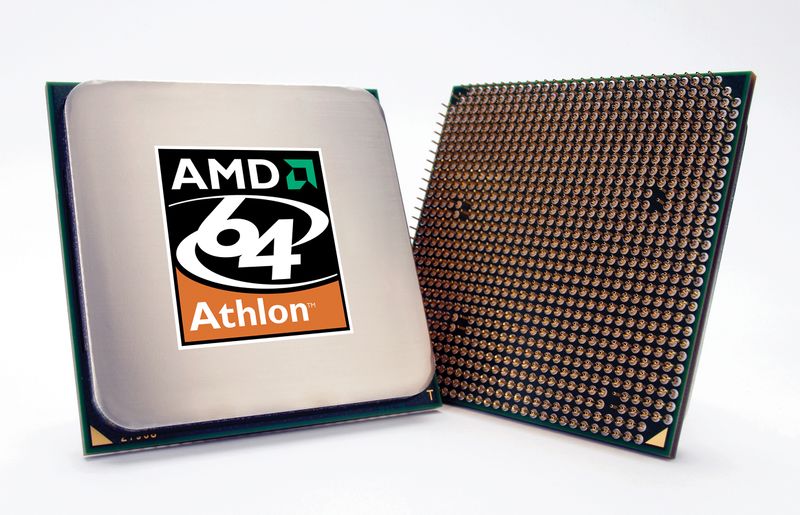 The company provided a further blow to Intel in the form of the first single-die x86 dual core processors with the Athlon X2 line in 2005.  Intel countered with dual core products of their own, but these had to use the GTL+ bus to communicate with each other.  It also lead to greater heat and power issues with the aging and increasingly unpopular Pentium 4 architecture.  During this time AMD was selling every good CPU that came off the line and tried to produce as much as possible.  Intel worked hard to limit AMD in a variety of ways that later were ruled to be uncompetitive in Europe and the US.  It would take years for the courts to reward AMD and fine Intel, but during that time AMD suffered from lower potential revenues than they could have experience.  That money could have gone into hiring and R&D.  AMD did not exactly suffer at this time as they were recording record revenues and profits, but the anti-competitive behavior by Intel did limit that success with many large OEMs like Dell, Sony, and others.

AMD continued to iterate on the Athlon 64 parts from top to bottom and started designing a new revision that would require a new socket as well as support DDR-2 memory.  Sadly for the company, they had awoken the sleeping giant with their outstanding parts.

Intel struck back with the Core 2 Duo in mid-2006 and has not looked back since.  With the release of the Athlon 64 Intel scrapped their Pentium 4 roadmap with Tejas and later projects.  Instead they decided on an architecture that was originally developed in Israel as the Dothan/Banias mobile cores based on the older P6 architecture.  Intel further enhanced this and created the Conroe chip that would power the Core 2 Duo.  These 65 nm parts, though lacking on-die northbridge components, still was overall faster than what AMD could offer with their latest Athlon x2 series based on the Windsor core that added socket AM2 and DDR-2 support.

Intel quickly regained the performance crown with these chips and stopped the marketshare gains that AMD had enjoyed for the past several years.  Intel went on to offer these much more efficient parts in quad core arrays using that same GTL+ bus to connect the cores.  AMD cut prices dramatically to keep marketshare, but revenue continued to drop.  AMD’s hope was that their new quad core architecture would be able to repeat what happened in 2003 with the original Athlon 64. 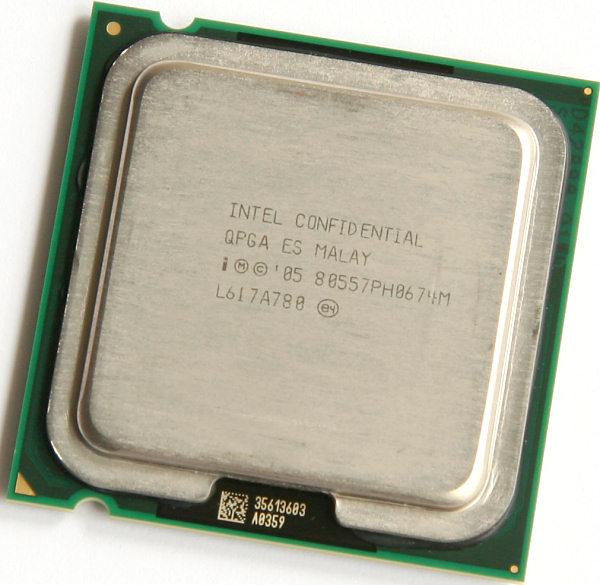 The Core 2 parts became popular with consumers up and down the stack while AMD was left with slower overall parts and no quad core competition on the consumer desktop.  AMD continued to be a solid competitor in the server marketplace due to their Hypertransport infrastructure allowing very fast and affordable 2P and 4P setups.  AMD attempted to get some of these products in enthusiasts’ hands by introducing concepts like “The Quadfather”, but they did not take off as they were hoping.  Intel always had an answer that worked better and pulled less power in the consumer space.