Ashes of the Singularity gets an update that drastically improves Ryzen performance.

It seems like it’s been months since AMD launched Ryzen, its first new processor architecture in about a decade, when in fact we are only four weeks removed. One of the few concerns about the Ryzen processors centered on its performance in some gaming performance results, particularly in common resolutions like 1080p. While I was far from the only person to notice these concerns, our gaming tests clearly showed a gap between the Ryzen 7 1800X and the Intel Core i7-7700K and 6900K processors in Civilization 6, Hitman and Rise of the Tomb Raider. 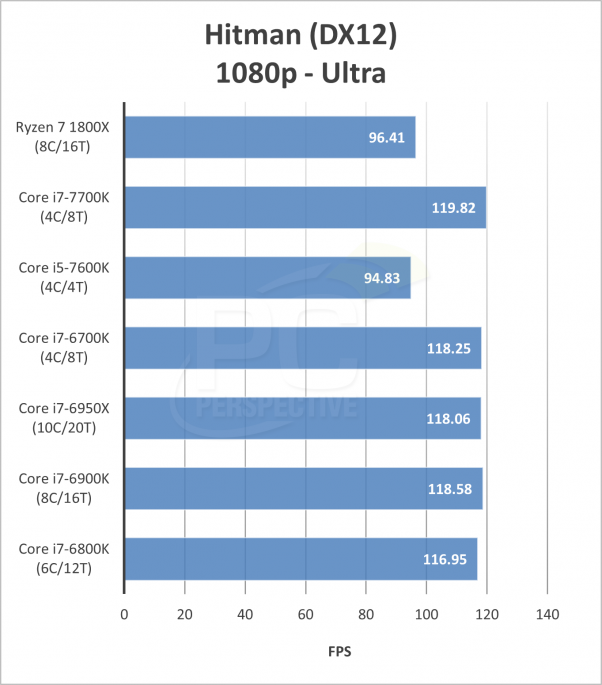 A graph from our Ryzen launch coverage…

We had been working with AMD for a couple of weeks on the Ryzen launch and fed back our results with questions in the week before launch. On March 2nd, AMD’s CVP of Marketing John Taylor gave us a prepared statement that acknowledged the issue but promised changes come in form for game engine updates. These software updates would need to be implemented by the game developers themselves in order to take advantage of the unique and more complex core designs of the Zen architecture. We had quotes from the developers of Ashes of the Singularity as well as the Total War series to back it up.

And while statements promising change are nice, it really takes some proof to get the often skeptical tech media and tech enthusiasts to believe that change can actually happen. Today AMD is showing its first result.

The result of 400 developer hours of work, the Nitrous Engine powering Ashes of the Singularity received an update today to version 26118 that integrates updates to threading to better balance the performance across Ryzen 7’s 8 cores and 16 threads. I was able to do some early testing on the new revision, as well as with the previous retail shipping version (25624) to see what kind of improvements the patch brings with it.

Stardock / Oxide CEO Brad Wardell had this to say in a press release:

“I’ve always been vocal about taking advantage of every ounce of performance the PC has to offer. That’s why I’m a strong proponent of DirectX 12 and Vulkan® because of the way these APIs allow us to access multiple CPU cores, and that’s why the AMD Ryzen processor has so much potential,” said Stardock and Oxide CEO Brad Wardell. “As good as AMD Ryzen is right now – and it’s remarkably fast – we’ve already seen that we can tweak games like Ashes of the Singularity to take even more advantage of its impressive core count and processing power. AMD Ryzen brings resources to the table that will change what people will come to expect from a PC gaming experience.”

Our testing setup is in line with our previous CPU performance stories.

I was using the latest BIOS for our ASUS Crosshair VI Hero motherboard (1002) and upgraded to some Geil RGB (!!) memory capable of running at 3200 MHz on this board with a single BIOS setting adjustment. All of my tests were done at 1080p in order to return to the pain point that AMD was dealing with on launch day. 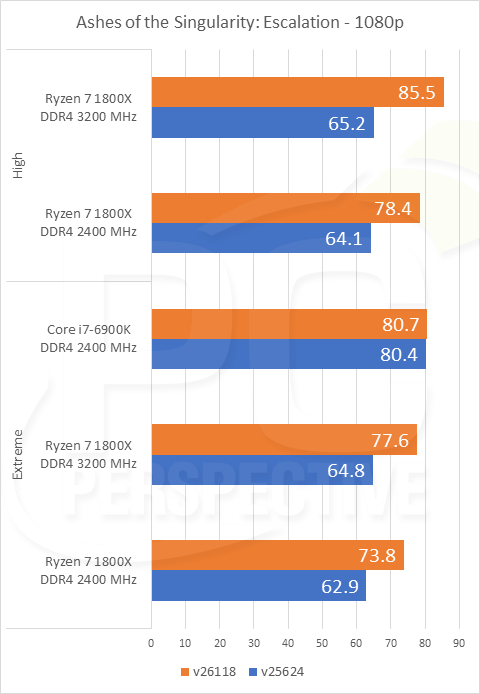 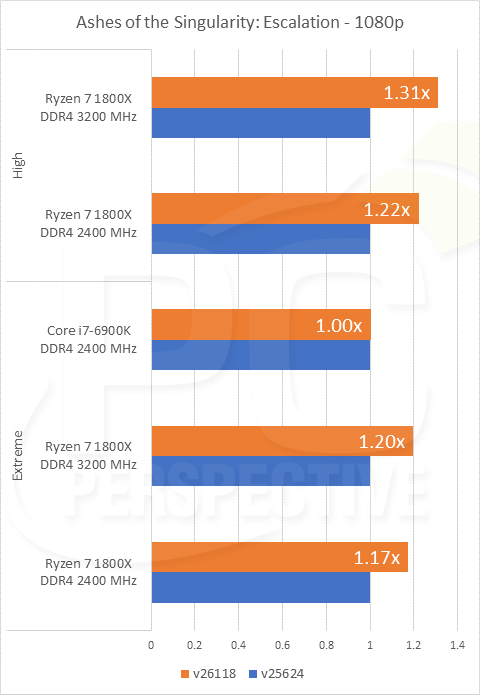 These are substantial performance improvements with the new engine code! At both 2400 MHz and 3200 MHz memory speeds, and at both High and Extreme presets in the game (all running in DX12 for what that’s worth), the gaming performance on the GPU-centric is improved. At the High preset (which is the setting that AMD used in its performance data for the press release), we see a 31% jump in performance when running at the higher memory speed and a 22% improvement with the lower speed memory. Even when running at the more GPU-bottlenecked state of the Extreme preset, that performance improvement for the Ryzen processors with the latest Ashes patch is 17-20%! 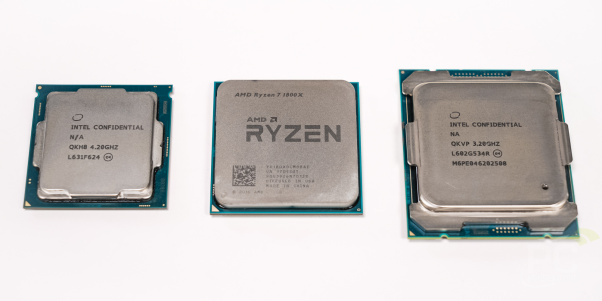 It’s also important to note that Intel performance is unaffected – either for the better or worse. Whatever work Oxide did to improve the engine for AMD’s Ryzen processors had NO impact on the Core processors, which is interesting to say the least. The cynic in me would believe there is little chance that any agnostic changes to code would raise Intel’s multi-core performance at least a little bit.

So what exactly is happening to the engine with v26118? I haven’t had a chance to have an in-depth conversation with anyone at AMD or Oxide yet on the subject, but at a high level, I was told that this is what happens when instructions and sequences are analyzed for an architecture specifically. “For basically 5 years”, I was told, Oxide and other developers have dedicated their time to “instruction traces and analysis to maximize Intel performance” which helps to eliminate poor instruction setup. After spending some time with Ryzen and the necessary debug tools (and some AMD engineers), they were able to improve performance on Ryzen without adversely affecting Intel parts. 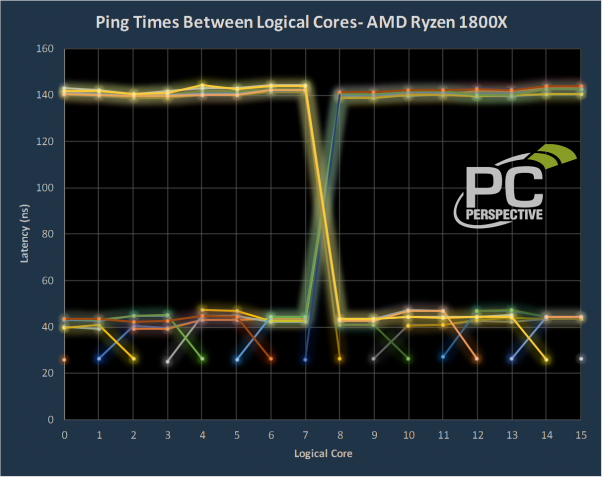 I am hoping to get more specific detail in the coming days, but it would seem very likely that Oxide was able to properly handle the more complex core to core communication systems on Ryzen and its CCX implementation. We demonstrated early this month how thread to thread communication across core complexes causes substantially latency penalties, and that a developer that intelligently manages threads that have dependencies on the core complex can improve overall performance. I would expect this is at least part of the solution Oxide was able to integrate (and would also explain why Intel parts are unaffected).

What is important now is that AMD takes this momentum with Ashes of the Singularity and actually does something with it. Many of you will recognize Ashes as the flagship title for Mantle when AMD made that move to change the programming habits and models for developers, and though Mantle would eventually become Vulkan and drive DX12 development, it did not foretell an overall shift as it hoped to. Can AMD and its developer relations team continue to make the case that spending time and money (which is what 400 developer hours equates to) to make specific performance enhancements for Ryzen processors is in the best interest of everyone? We’ll soon find out.