Data Robotics shipped their first product 10 years ago. Dubbed the Drobo (short for Data Robot), it was a 4-bay hot-swappable USB 2.0 connected external storage device. At a time where RAID was still a term mostly unknown to typical PC users, the Drobo was already pushing the concept of data redundancy past what those familiar with RAID were used to. BeyondRAID offered a form of redundant data storage that decoupled rigid RAID structures from fixed capacity disk packs. While most RAID volumes were 'dumb', BeyondRAID was aware of what was stored within its partitions, distributing that data in block format across the available disks. This not only significantly speed up rebuilding (only used portions of the disks need be recopied), it allowed for other cool tricks like the ability to mix drive capacities within the same array. Switching between parity levels could also be done on-the-fly and with significantly less effort than traditional RAID migrations. 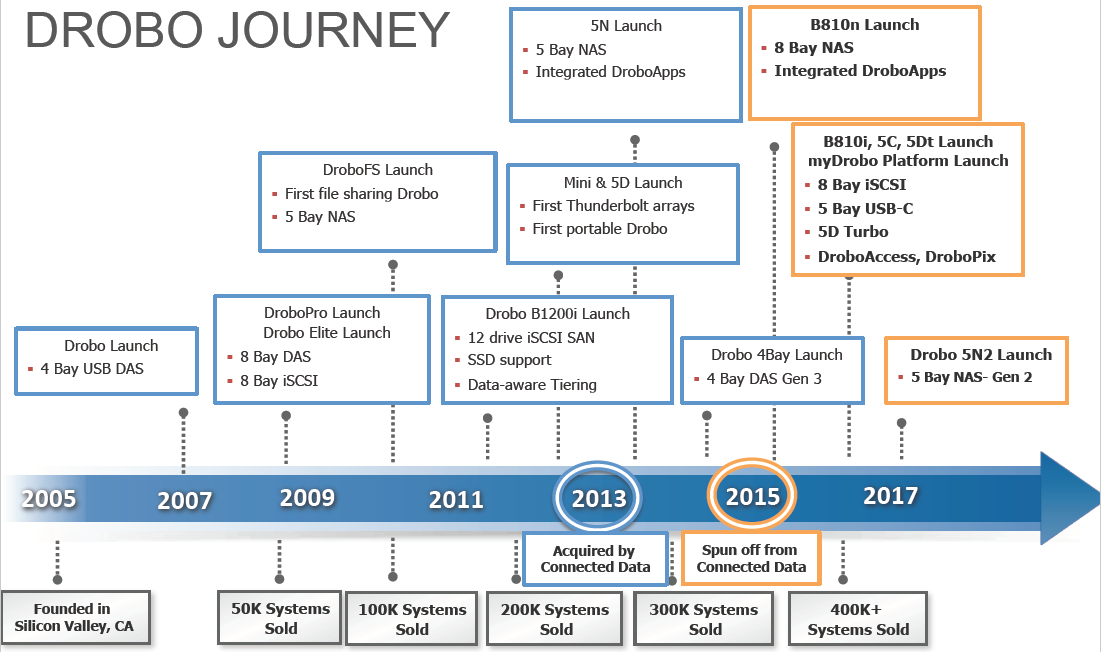 While all of the above was great, the original Drobo saw performance hits from its block level management, which was limited by the processing overhead combined with the available processing power for such a device at the time. The first Drobo model was lucky to break 15 MB/s, which could not even fully saturate a USB 2.0 link. After the launch, requests for network attached capability led to the launch of the DroboShare, which could act as a USB to ethernet bridge. It worked but was still limited by the link speed of the connected Drobo. A Drobo FS launched a few years later, but it was not much quicker. Three years after that we got the 5N, which was finally a worthy contender in the space.

10 years and nearly a dozen models later, we now have the Drobo 5N2, which will replace the aging 5N. The newer model retains the same 5-bay form factor and mSATA bay for optional SSD cache but adds a second bondable Gigabit Ethernet port and upgrades most of the internals. Faster hardware specs and newer more capable firmware enables increased throughput and volume sizes up to 64TB. Since BeyondRAID is thin provisioned, you always make the volume as large as it can be and simply add disk capacity as the amount of stored content grows over time. 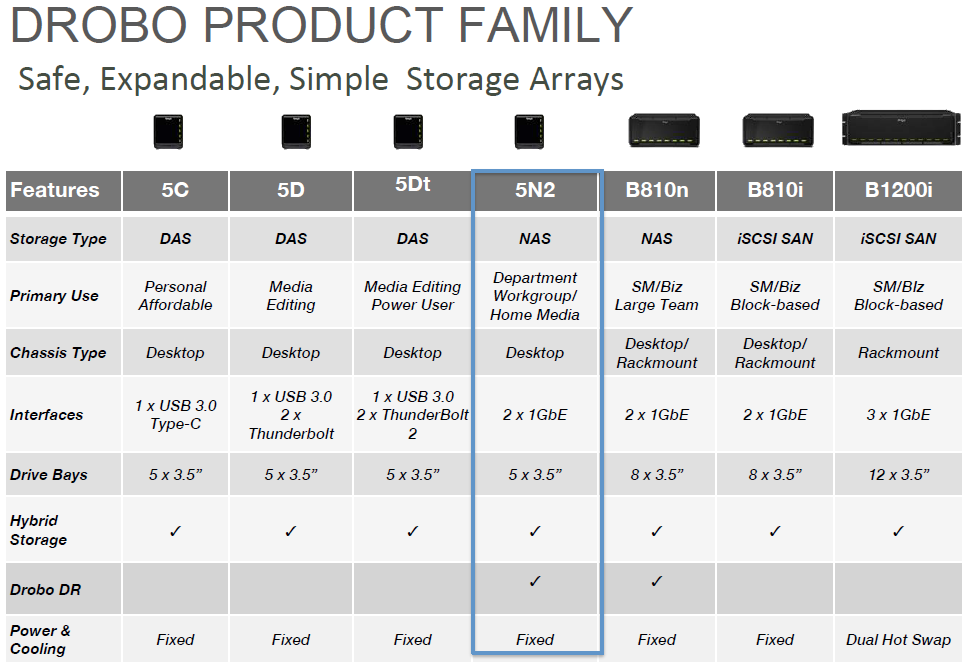 The 5N2 sits at the higher end of the consumer Drobos, just below the much higher end 8-bay models, but don't let the 5-bays fool you. The 5N2 actually borrows many of the features of the B810n. 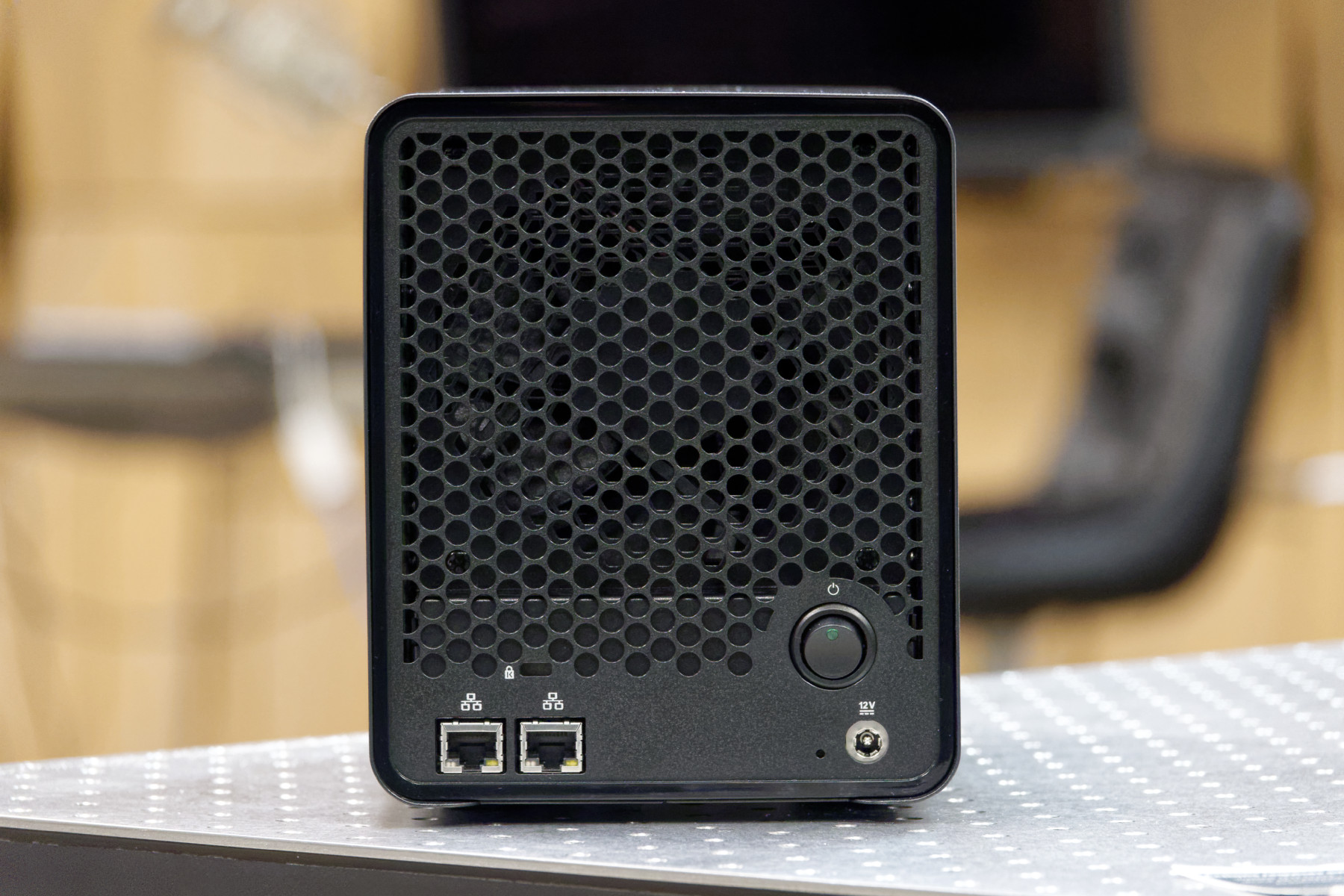 The biggest feature here is dual Gigabit, and what makes it so great on Drobos is their seamless implementation of channel bonding, which effectively doubles the possible network throughput. While you are still limited by the Gigabit link of destination systems on the network, multiple streams to separate computers or to a single 10 GbE system will see significant improvements to transfer speed.

Drobo has always been pretty good about supporting migration from older hardware, and while their list of NAS-type devices is a short one, they do support migrations to the new 5N2, with a few notable caveats. While you can simply shut down your old Drobo FS or 5N and move your disk pack over to the new 5N2 and be back up and running within a few minutes, the older file system formats used on those units are not in-place migratable and will incur a 25% performance penalty. This only applies to older 16TB-limited volumes – if you created a volume more recently on a 5N with newer firmware (3.5.0 and up), you can avoid this concern. The differences between the old and new file systems stem from BeyondRAID improvements coupled with a shift from ext3 to ext4 for the base file system, and unfortunately the only way to upgrade to the newer format is to set up the 5N2 with a fresh set of disks and copy your files over from your older FS/5N prior to decommissioning it.

Speaking of upgrading, Drobo is offering a $50 discount on the 5N2 to Drobo FS and 5N owners. The offer is valid through April 4, 2017, via drobostore.com. 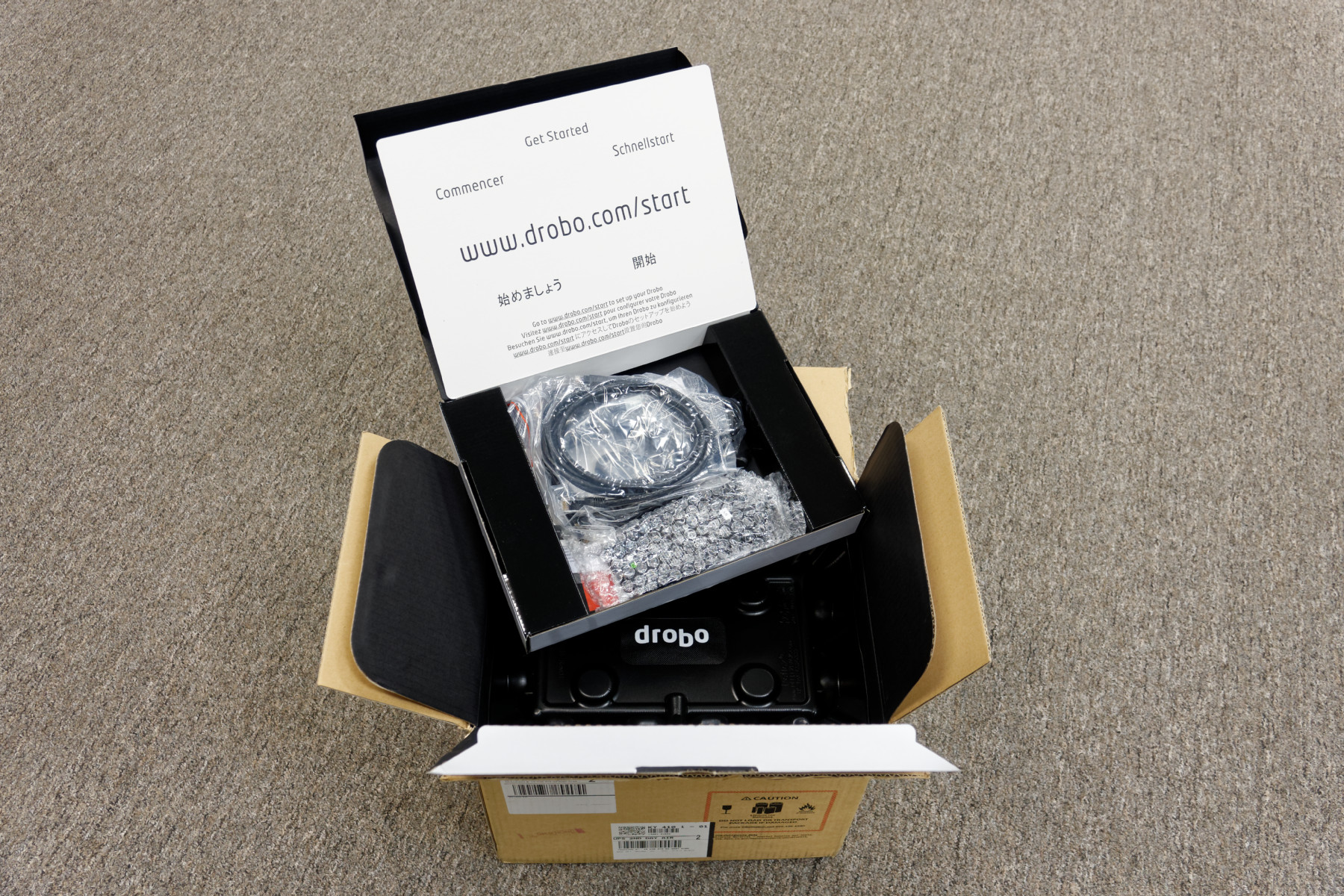 The Drobo unboxing experience is always simple and straightforward. 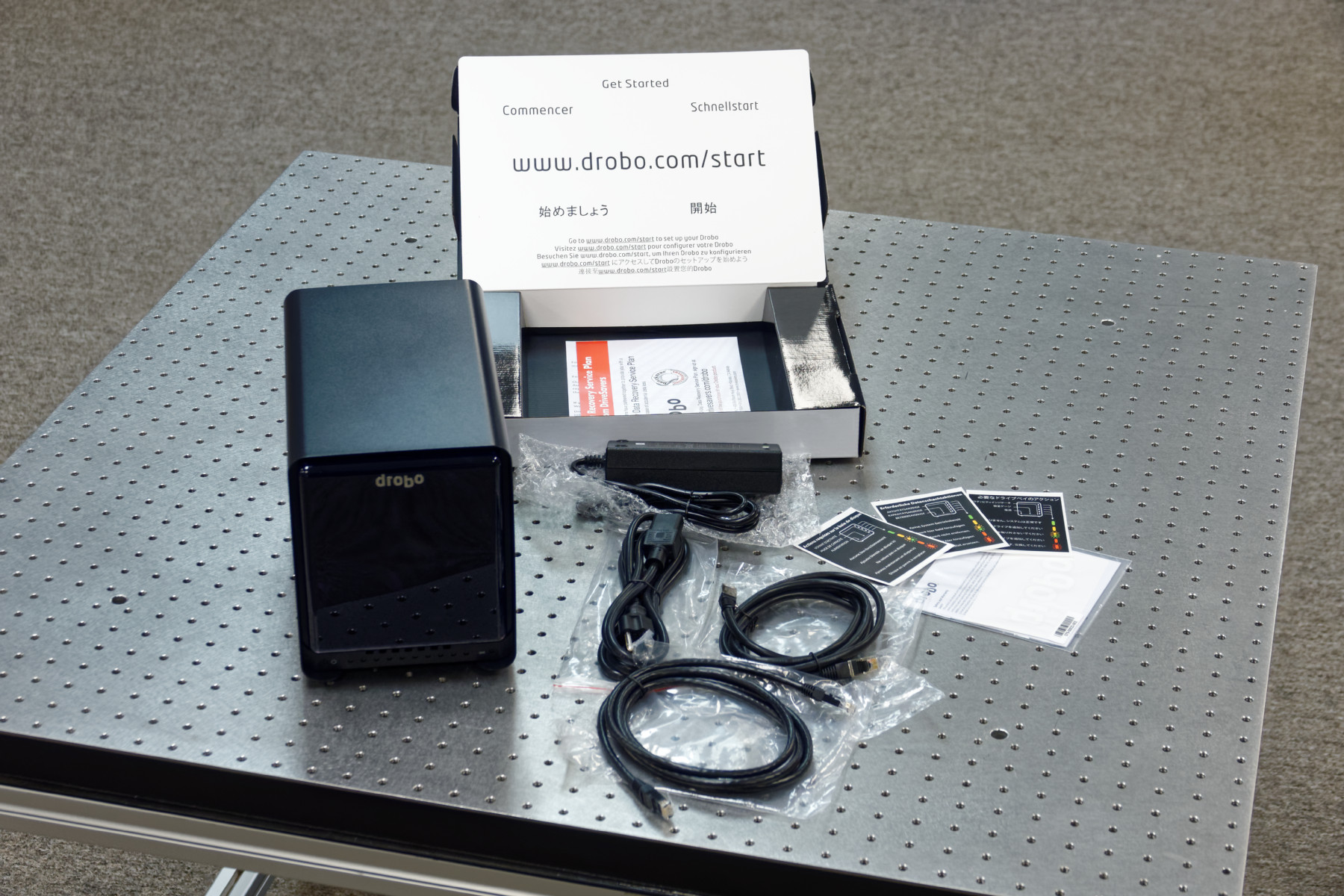 Simple notes, links, and quick start guides get you up and running quickly. 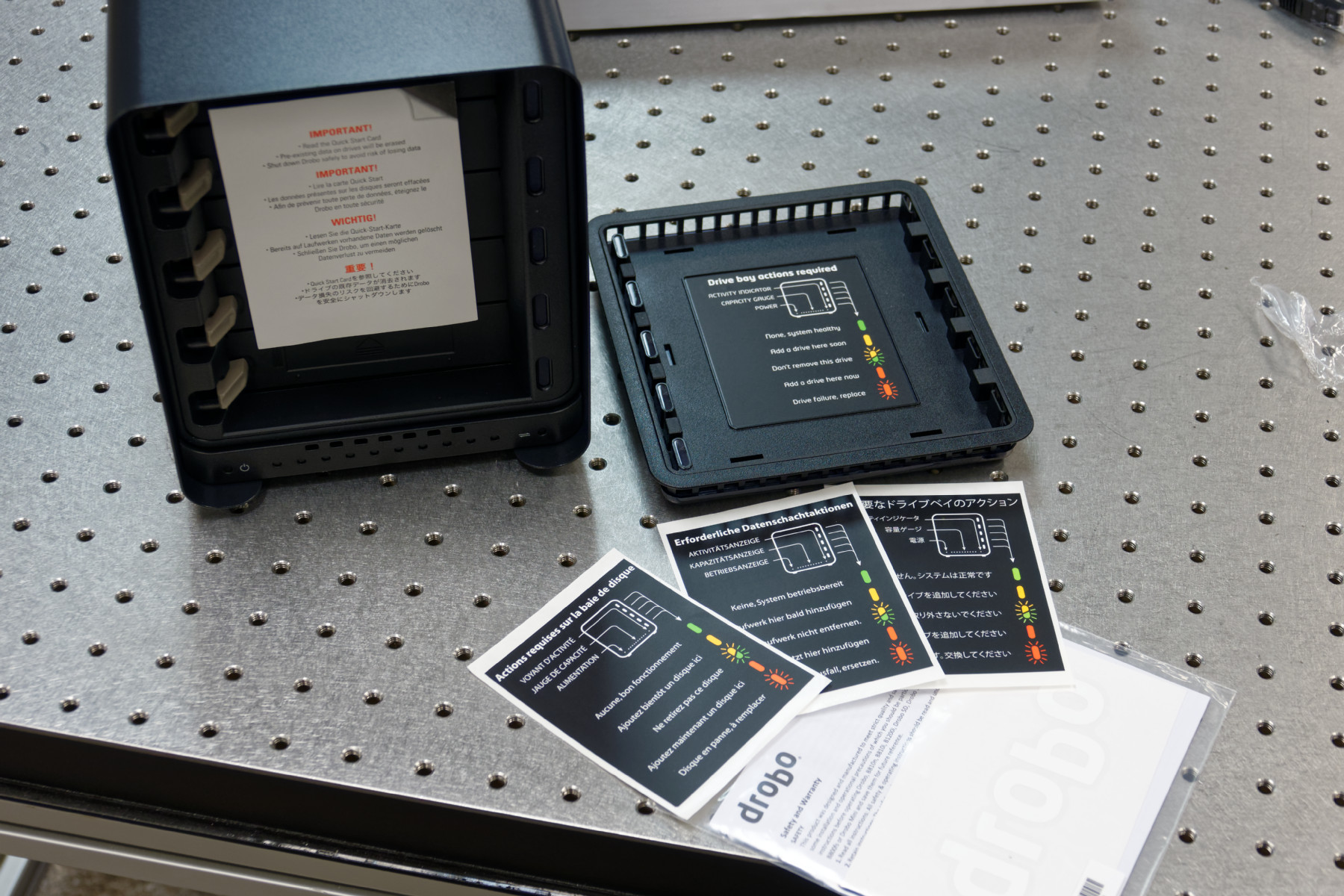 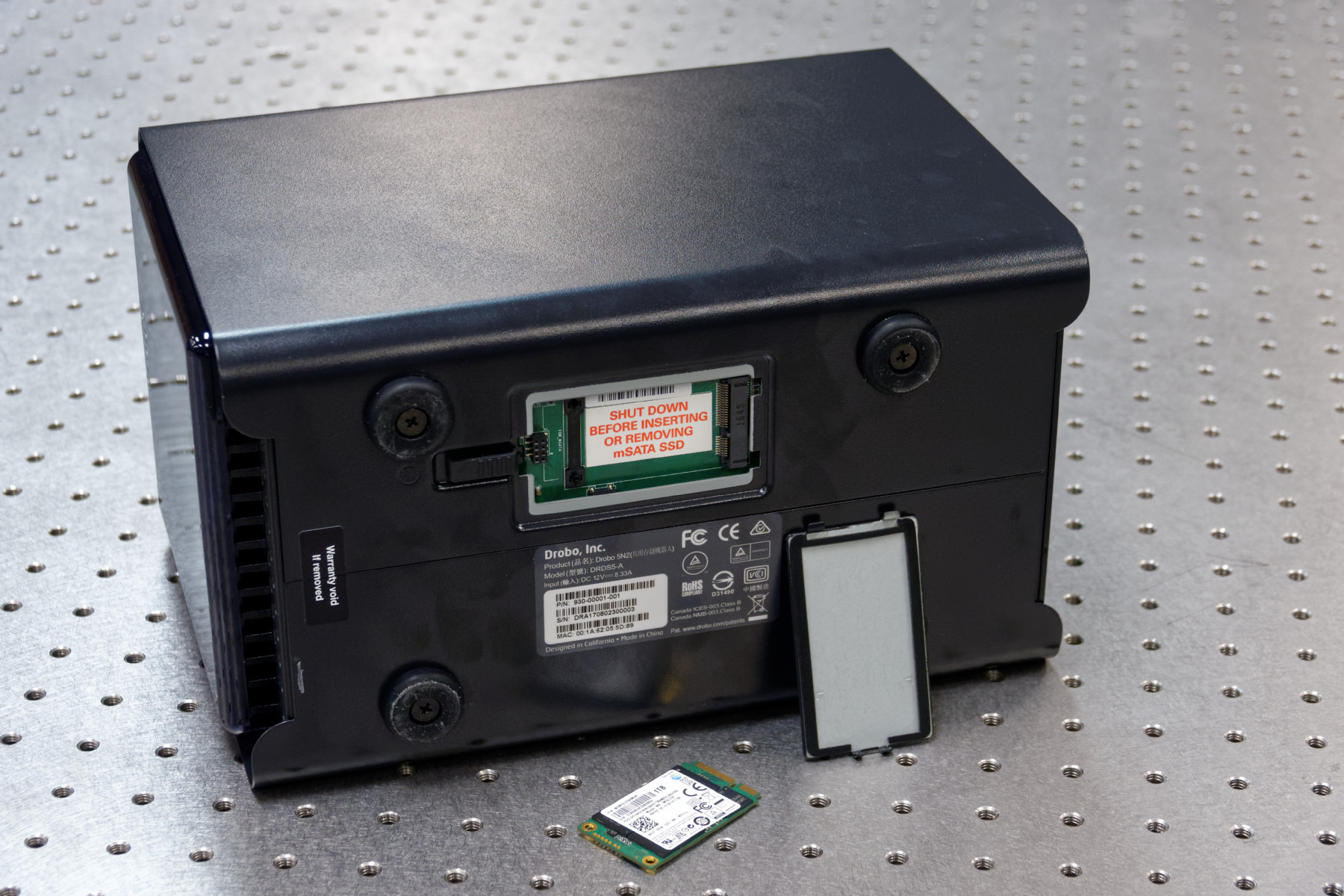 Before moving onto the setup process, here's a look at the underbelly mSATA slot. Like the drive bays, installation is completely tool-less.