I was expecting this for SIGGRAPH… and I might still be right?

The Khronos Group has released the Vulkan 1.0.42.0 specification, which includes experimental (more on that in a couple of paragraphs) support for VR enhancements, sharing resources between processes, and linking similar GPUs. This spec was released alongside a LunarG SDK and NVIDIA drivers, which are intended for developers, not gamers, that fully implement these extensions.

I would expect that the most interesting feature is experimental support for linking similar GPUs together, similar to DirectX 12’s Explicit Linked Multiadapter, which Vulkan calls a “Device Group”. The idea is that the physical GPUs hidden behind this layer can do things like share resources, such as rendering a texture on one GPU and consuming it in another, without the host code being involved. I’m guessing that some studios, like maybe Oxide Games, will decide to not use this feature. While it’s not explicitly stated, I cannot see how this (or DirectX 12’s Explicit Linked mode) would be compatible in cross-vendor modes. Unless I’m mistaken, that would require AMD, NVIDIA, and/or Intel restructuring their drivers to inter-operate at this level. Still, the assumptions that could be made with grouped devices are apparently popular with enough developers for both the Khronos Group and Microsoft to bother. 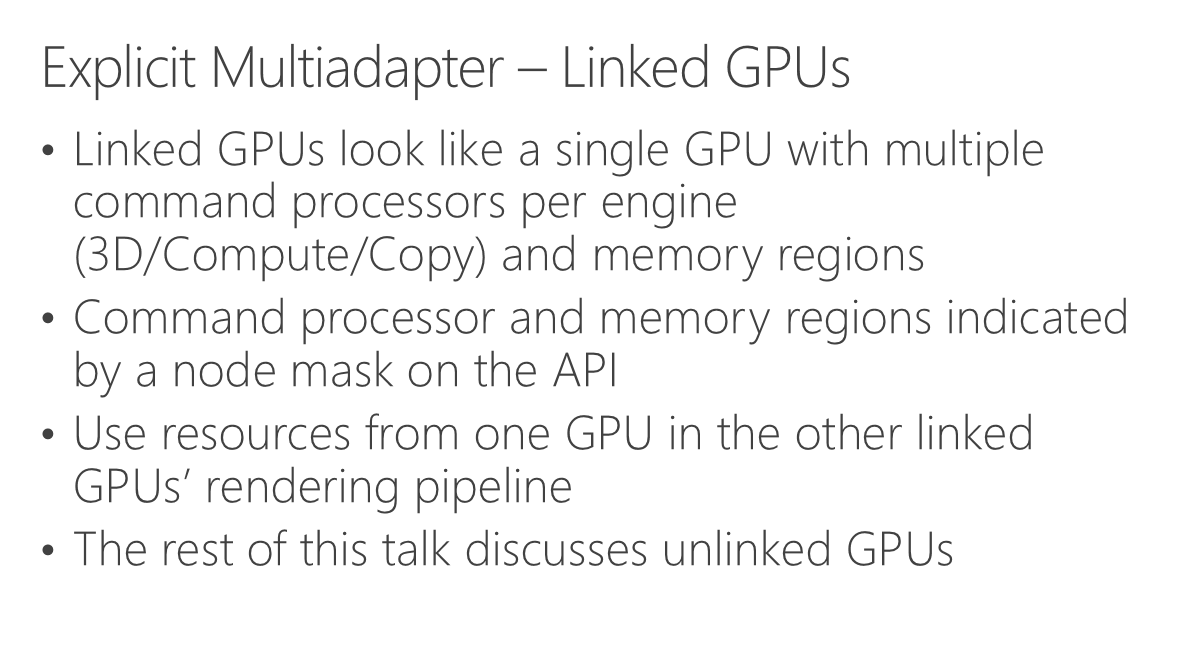 A slide from Microsoft's DirectX 12 reveal, long ago.

As for the “experimental” comment that I made in the introduction… I was expecting to see this news around SIGGRAPH, which occurs in late-July / early-August, alongside a minor version bump (to Vulkan 1.1).

The major new features of Vulkan 1.0.42.0 are implemented as a new classification of extensions: KHX. In the past, vendors, like NVIDIA and AMD, would add new features as vendor-prefixed extensions. Games could query the graphics driver for these abilities, and enable them if available. If these features became popular enough for multiple vendors to have their own implementation of it, a committee would consider an EXT extension. This would behave the same across all implementations (give or take) but not be officially adopted by the Khronos Group. If they did take it under their wing, it would be given a KHR extension (or added as a required feature).

The Khronos Group has added a new layer: KHX. This level of extension sits below KHR, and is not intended for production code. You might see where this is headed. The VR multiview, multi-GPU, and cross-process extensions are not supposed to be used in released video games until they leave KHX status. Unlike a vendor extension, the Khronos Group wants old KHX standards to drop out of existence at some point after they graduate to full KHR status. It’s not something that NVIDIA owns and will keep it around for 20 years after its usable lifespan just so old games can behave expectedly.

How long will that take? No idea. I’ve already mentioned my logical but uneducated guess a few paragraphs ago, but I’m not going to repeat it; I have literally zero facts to base it on, and I don’t want our readers to think that I do. I don’t. It’s just based on what the Khronos Group typically announces at certain trade shows, and the length of time since their first announcement.

The benefit that KHX does bring us is that, whenever these features make it to public release, developers will have already been using it… internally… since around now. When it hits KHR, it’s done, and anyone can theoretically be ready for it when that time comes.