Relidding the Processor Step by Step

Now that we've introduced the tools, lets get to the actual procedure involved in delidding and relidding your Kaby Lake processor using the RockIt 88 tool. RockIt Cool also provides its own instruction set and a video here. 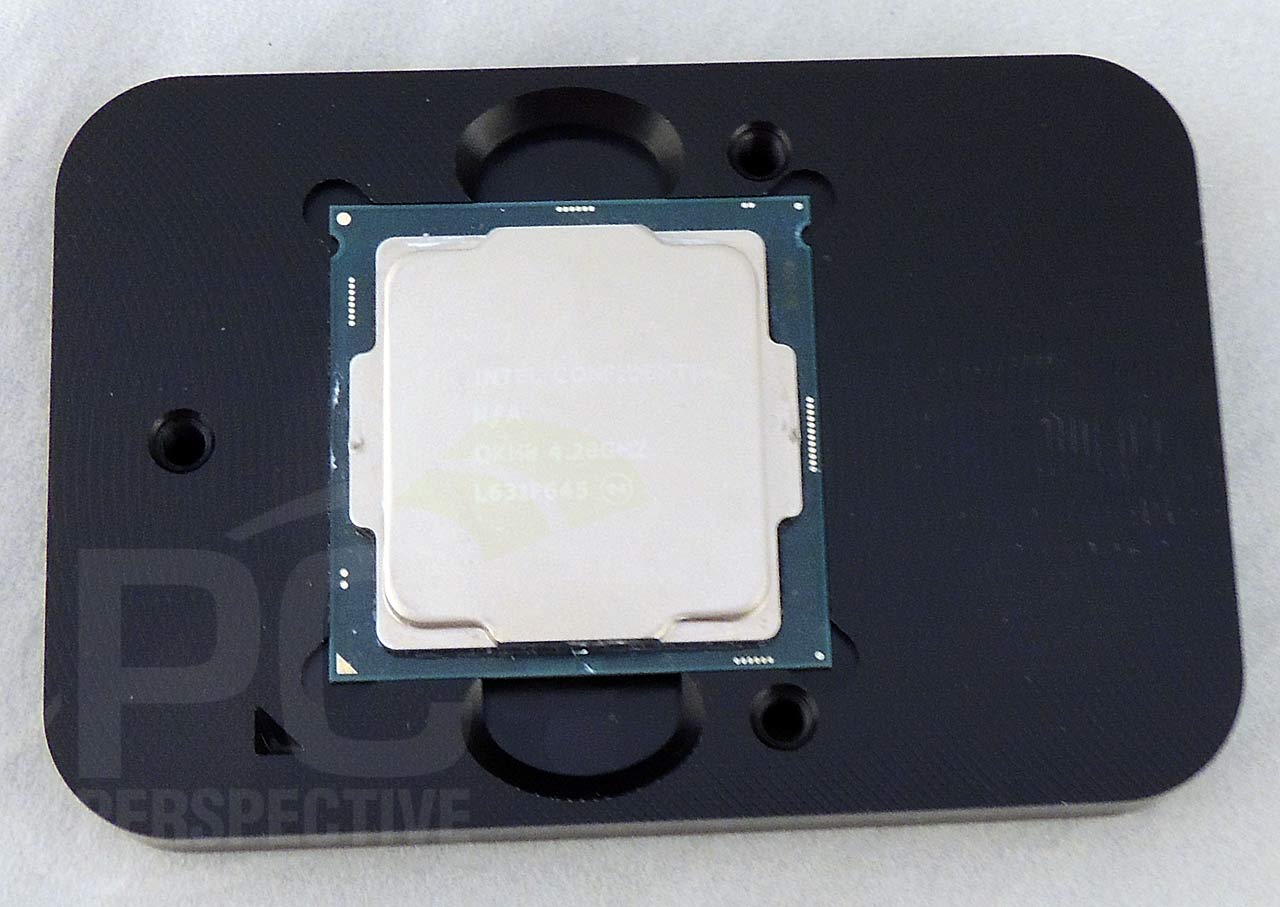 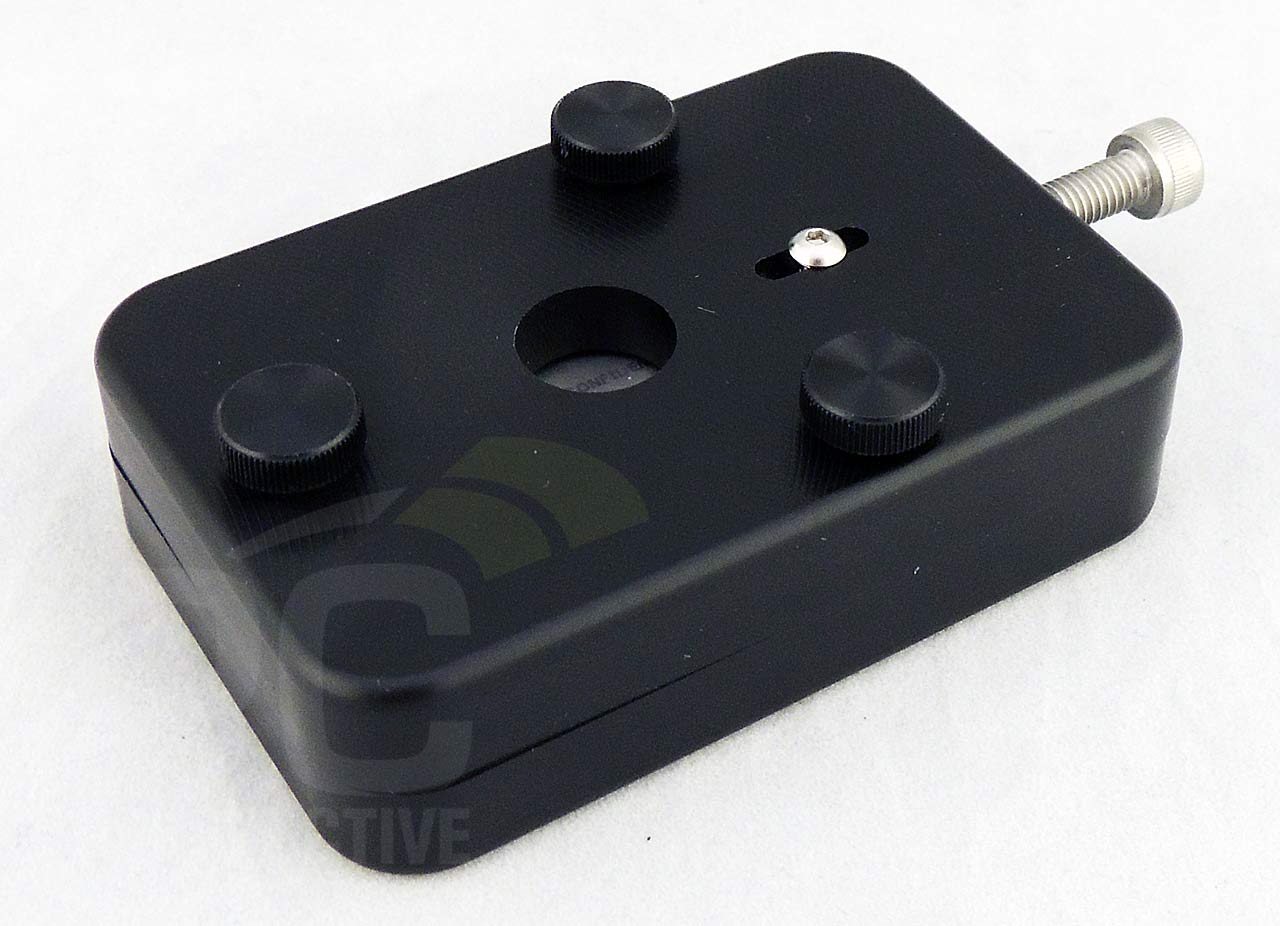 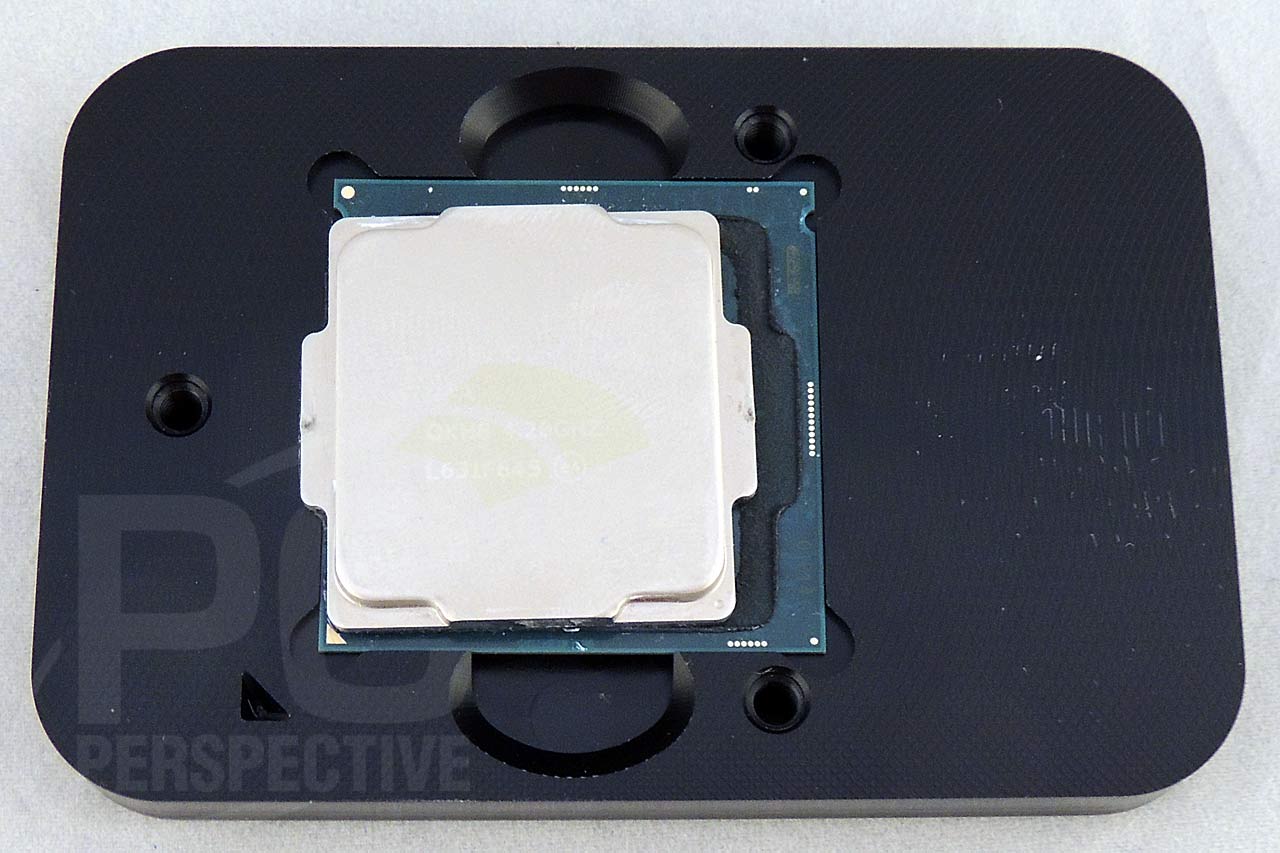 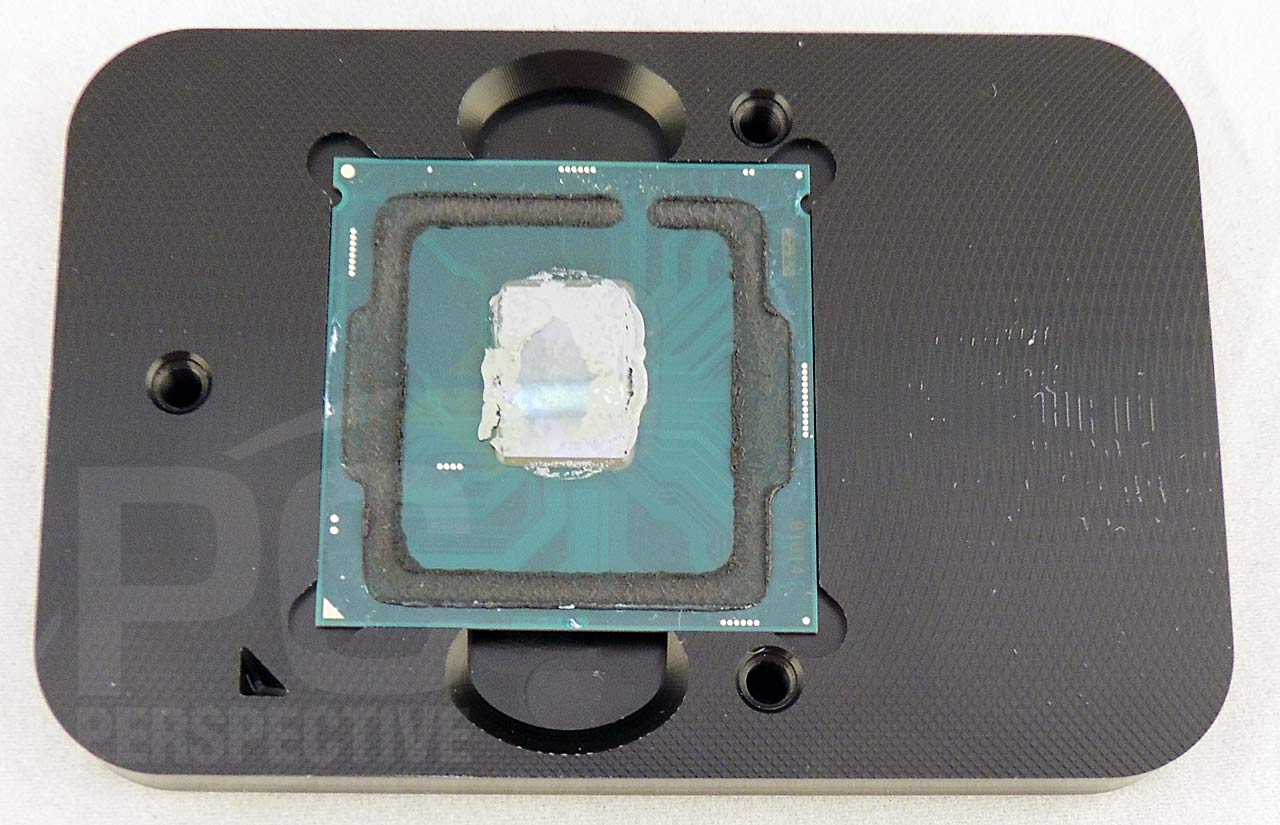 Once the RockIt 88 is put together with the processor inside, start tightening the torque screw with the provided hex wrench. Stop tightening as soon as you hear the "pop", that signifies that you have broken the adhesive seal between the processor PCB and heat spreader. At that point, unscrew the torque screw back out and remove the thumbscrews holding the top plate in place. The processor should appear as shown with the heat spreader slight off center to the left of the PCB if looking straight down on the assembly. At this point, you should be able to lift off the heat spreader easily, exposing the processor die and factory TIM application. 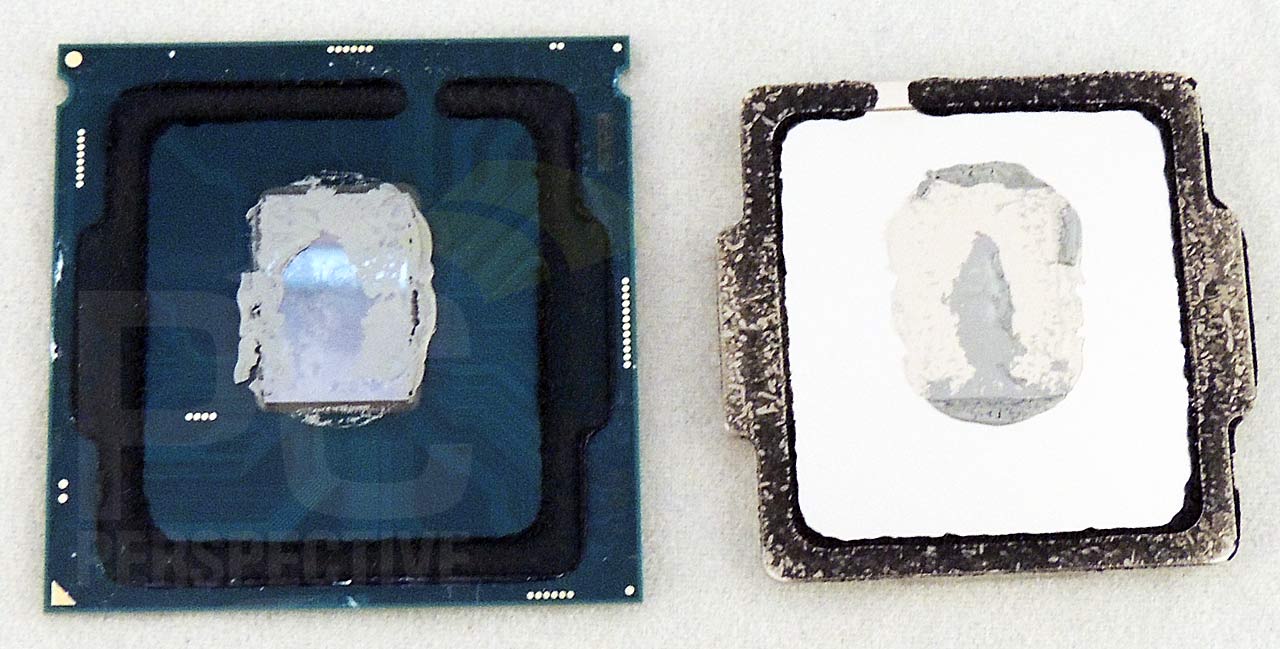 You can now safely remove the processor PCB from the RockIt 88 base plate. Your processor PCB and underside of the heat spreader should look similar to the one shown with a ring of RTV-like adhesive along the outside and flakes of TIM on both parts. Now comes the fun part 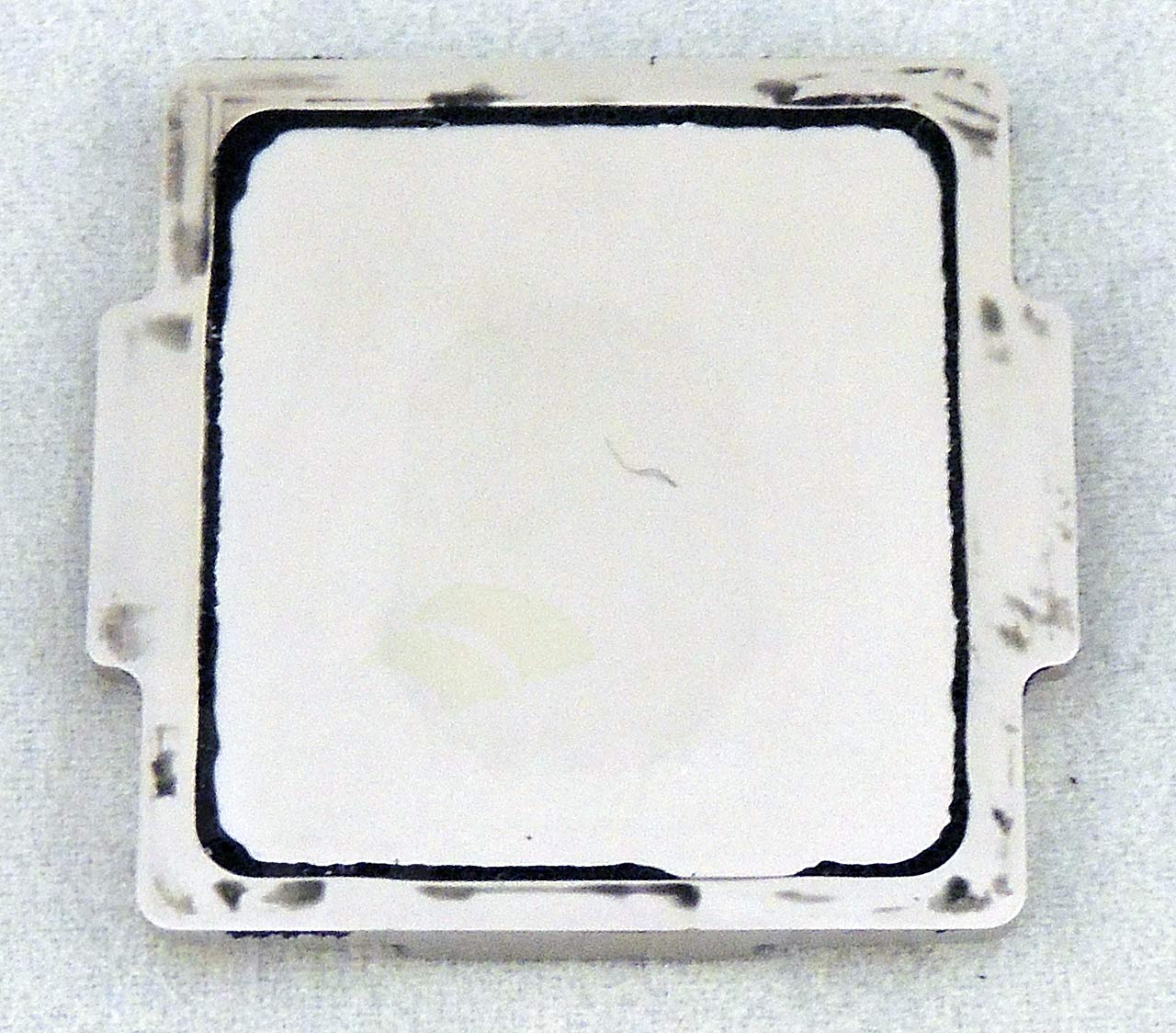 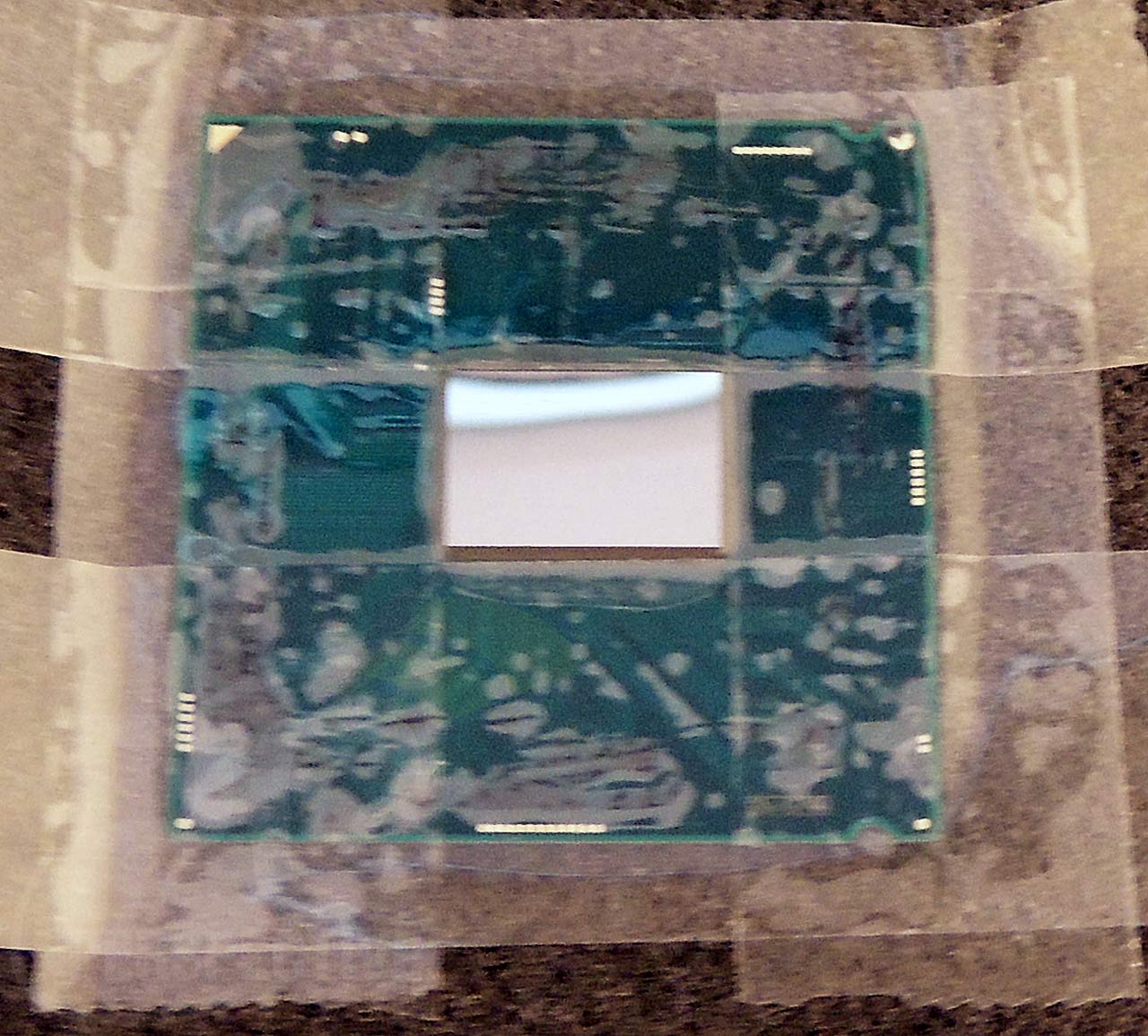 Next, soak the RTV adhesive with an alcohol-dipped Q-tip on the PCB. Then begin *very carefully* scraping the RTV adhesive from the PCB surface using the plastic or hard rubber card. Take your time and be very gentle because you do not want to scratch the PCB surface or accidentally detach any of the PCB surface circuitry. Work your way around the PCB, continuing to alternate between resoaking the RTV with alcohol and scraping it off until the surface is clean. Then repeat the procedure with the outer lip of the heat spreader underside.

Once you are happy with the TIM and RTV material removal from the heat spreader underside and the processor PCB, you need to prep the the processor die for thermal paste application. Simply apply a single piece of scotch tape along each side of the processor die, making sure to get it as tight in to the side of the die as possible. You want to use scotch tape for this and not something more adhesive to minimize the chance of removing PCB circuitry when you pull the tape off. Make sure to run your finger along all side of the die and PCB to ensure that the tape has an air tight mating with the PCB surface. 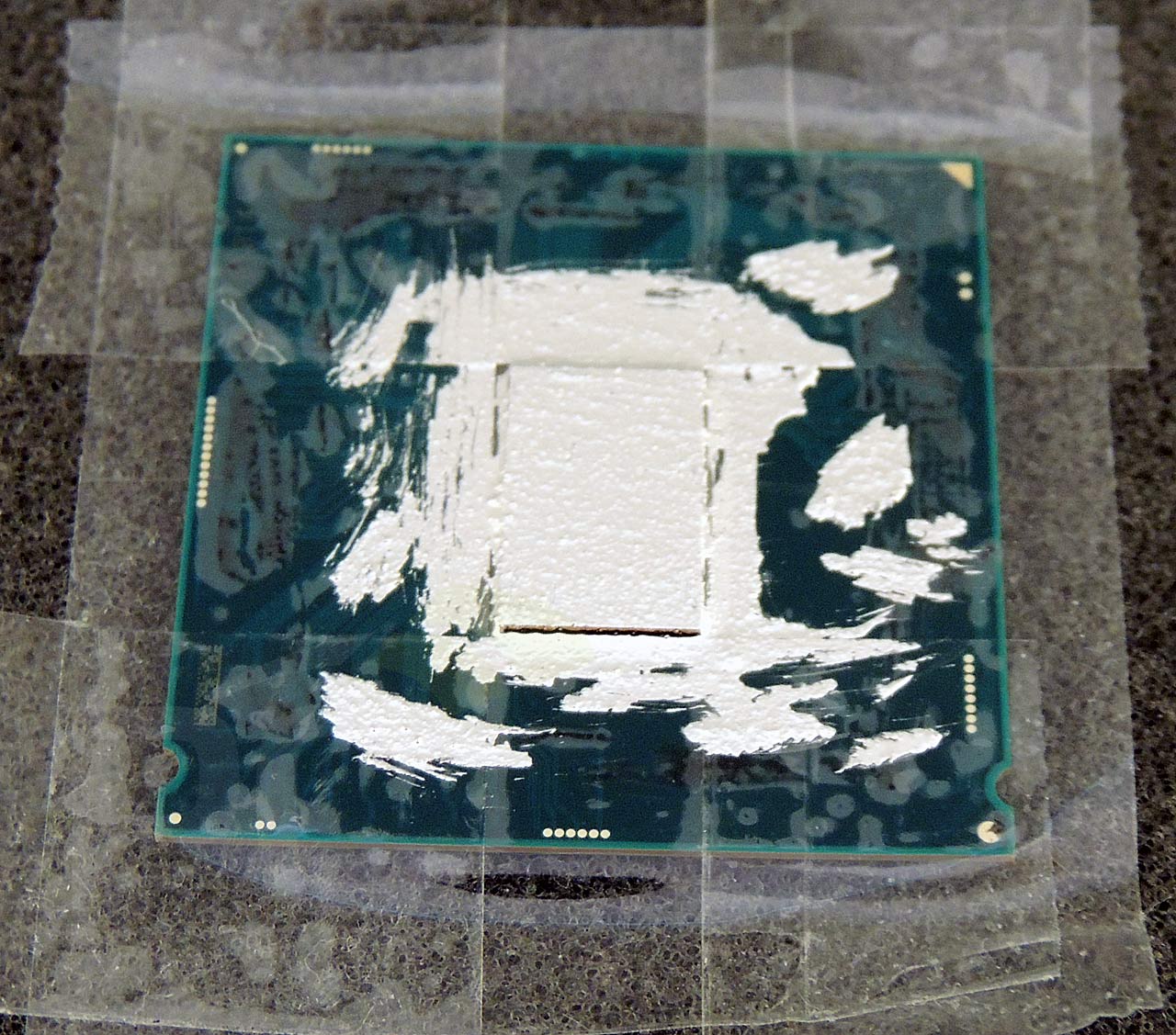 Once the processor PCB is prepped and the die is clean, begin to apply the Coollaboratory Liquid Metal to the die surface. Squeeze a bit of the thermal paste onto the die from the needle applicator and then spread the paste in as thin a layer as possible using the included application brush. Don't worry about getting the paste on the tape, that's what its there for. Jut make sure to get the paste spread as thinly and evenly as possible. 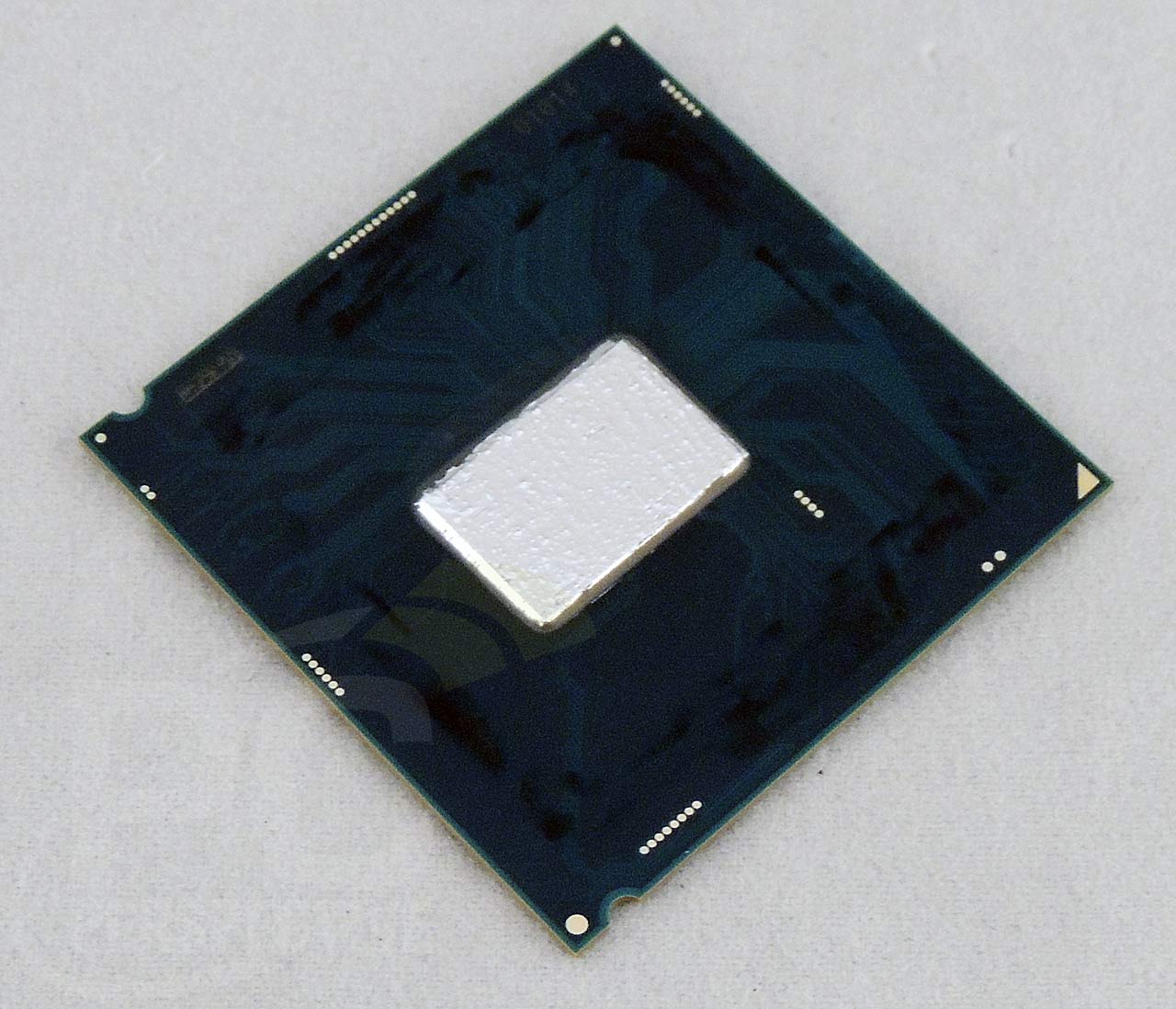 Then carefully remove the tape from the processor PCB. You should end up with a perfectly coated processor die with no thermal paste on the PCB. 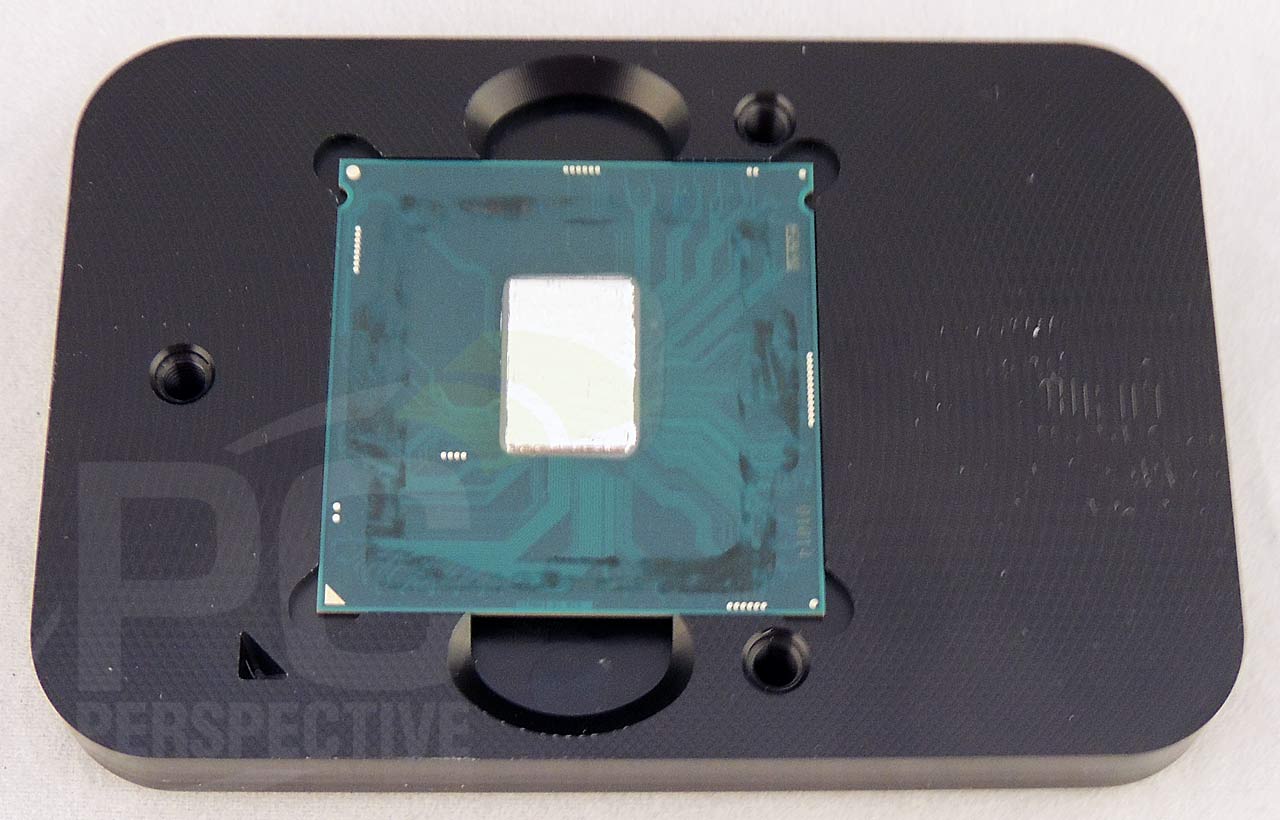 Next, carefully place the processor PCB into the RockIt 88 base plate making sure to orient the triangle on the PCB with the triangular cutout on the base plate. Also, be careful not to touch the processor die so you don't disturb your perfect thermal paste application. 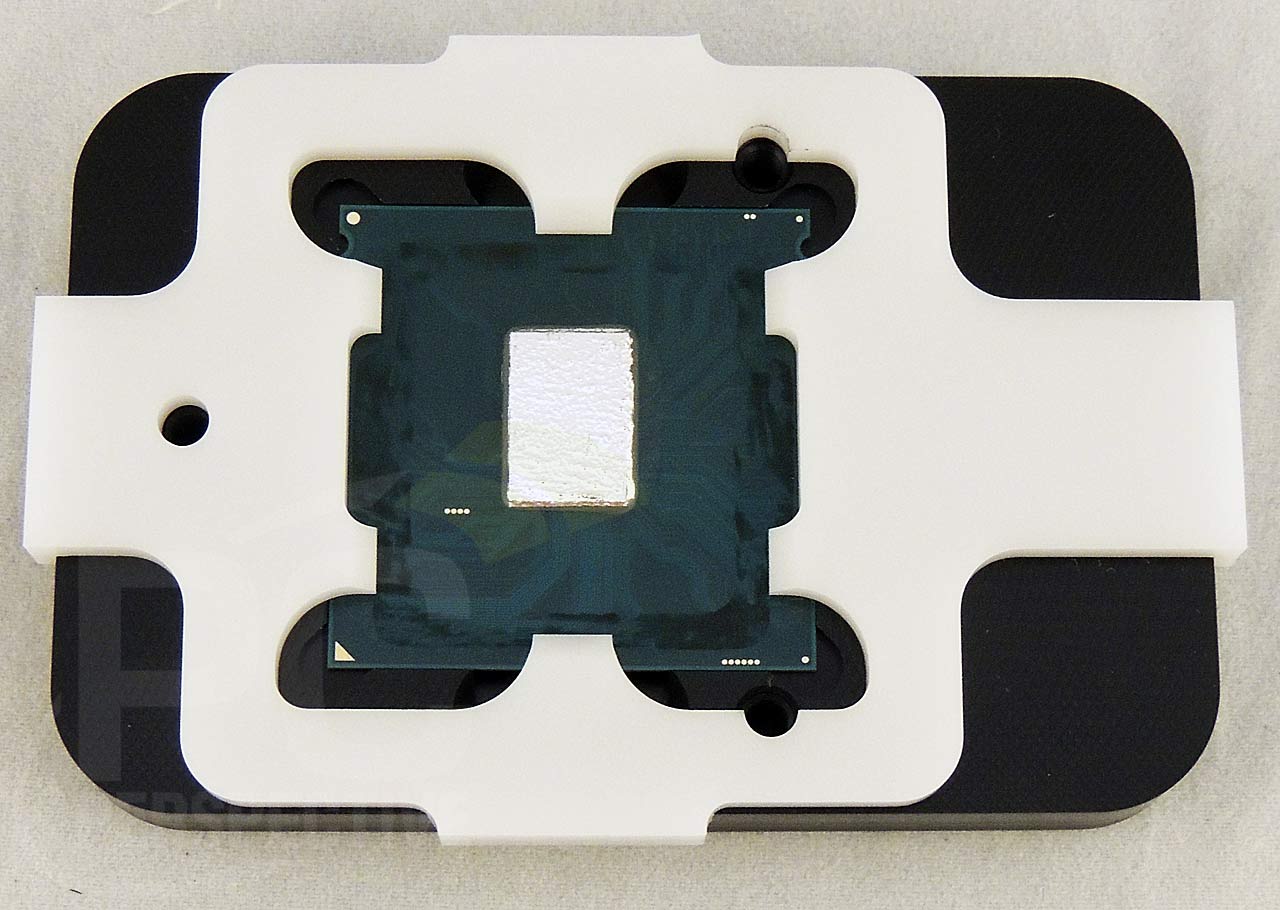 Next, carefully snap the Re-Lid hold down plate to the RockIt 88 base plate to fix the processor PCB in place. Again, be careful not to disturb the thermal paste on the processor die.

At this point, you are almost done. Before applying the black RTV to the underside of the heat spreader, test fit the heat spreader to the seated processor PCB. It should fit easily within the center channel in the re-lid hold down plate. Proper heat spreader orientation is with the embedded text right-side up with the PCB triangle in the lower left position. Now to finish it up. 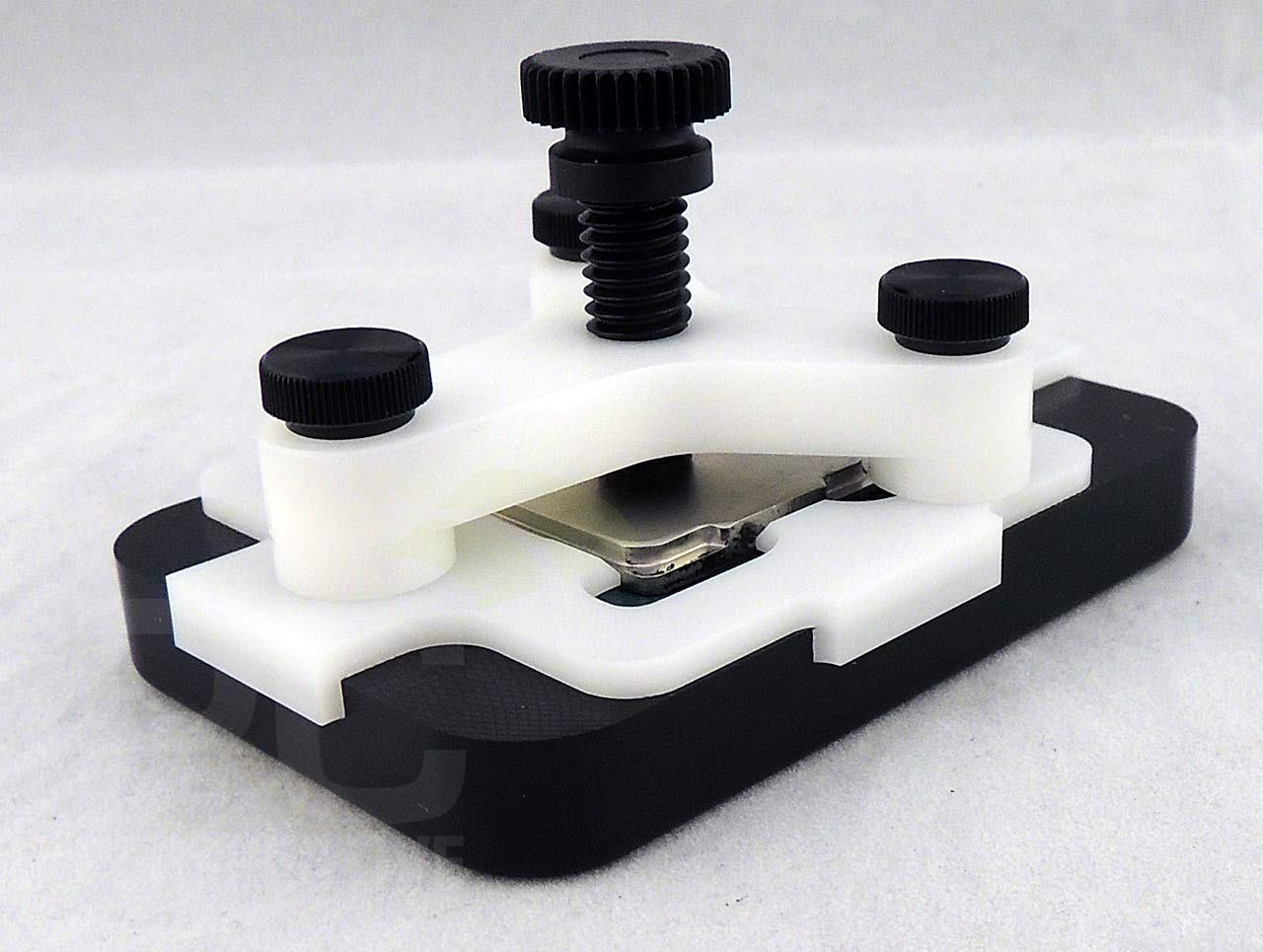 Screw the center screw into the torque plate and then carefully fix the torque plate in place over the reassembled processor using the three thumbscrews provided with the RockIt 88, being careful not to disturb the heat spreader. Make sure to tighten the three side thumbscrews down all the way so that the Re-Lid Kit is held tightly in place to the base plate. Then carefully tighten the center thumbscrew down until it is tightly in place and leave the assembly alone for 24 hours. That is to give the RTV sufficient time to cure and mate the heat spreader to the PCB.

Congratulations, you have re-lidded your Kaby Lake processor successfully. Now you need to remove the center thumbscrew, then the three outer thumbscrews. Remove the torque plate and then *very carefully* unsnap the re-lid hold down plate from the RockIt 88 base plate. You should be able to remove your newly improved processor from the device and it should look no different from when you first started out. But boy, will you be impressed with its temperature performance. 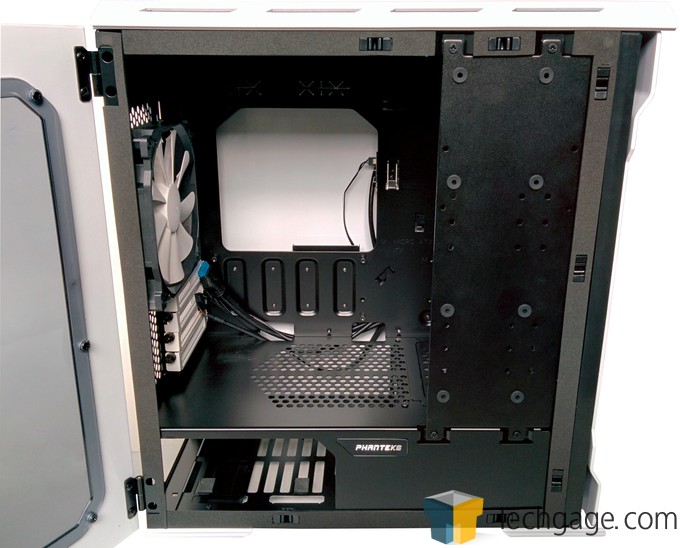