It seems that all Ryzen processors have the same OC limits from the fab…does that make this CPU the best?

While many in the media and enthusiast communities are still trying to fully grasp the importance and impact of the recent AMD Ryzen 7 processor release, I have been trying to complete my review of the 1700X and 1700 processors, in between testing the upcoming GeForce GTX 1080 Ti and preparing for more hardware to show up at the offices very soon. There is still much to learn and understand about the first new architecture from AMD in nearly a decade, including analysis of the memory hierarchy, power consumption, overclocking, gaming performance, etc.

During my Ryzen 7 1700 testing, I went through some overclocking evaluation and thought the results might be worth sharing earlier than later. This quick article is just a preview of what we are working on so don’t expect to find the answers to Ryzen power management here, only a recounting of how I was able to get stellar performance from the lowest priced Ryzen part on the market today.

The system specifications for this overclocking test were identical to our original Ryzen 7 processor review.

Of note is that I am still utilizing the Noctua U12S cooler that AMD provided for our initial testing – all of the overclocking and temperature reporting in this story is air cooled. 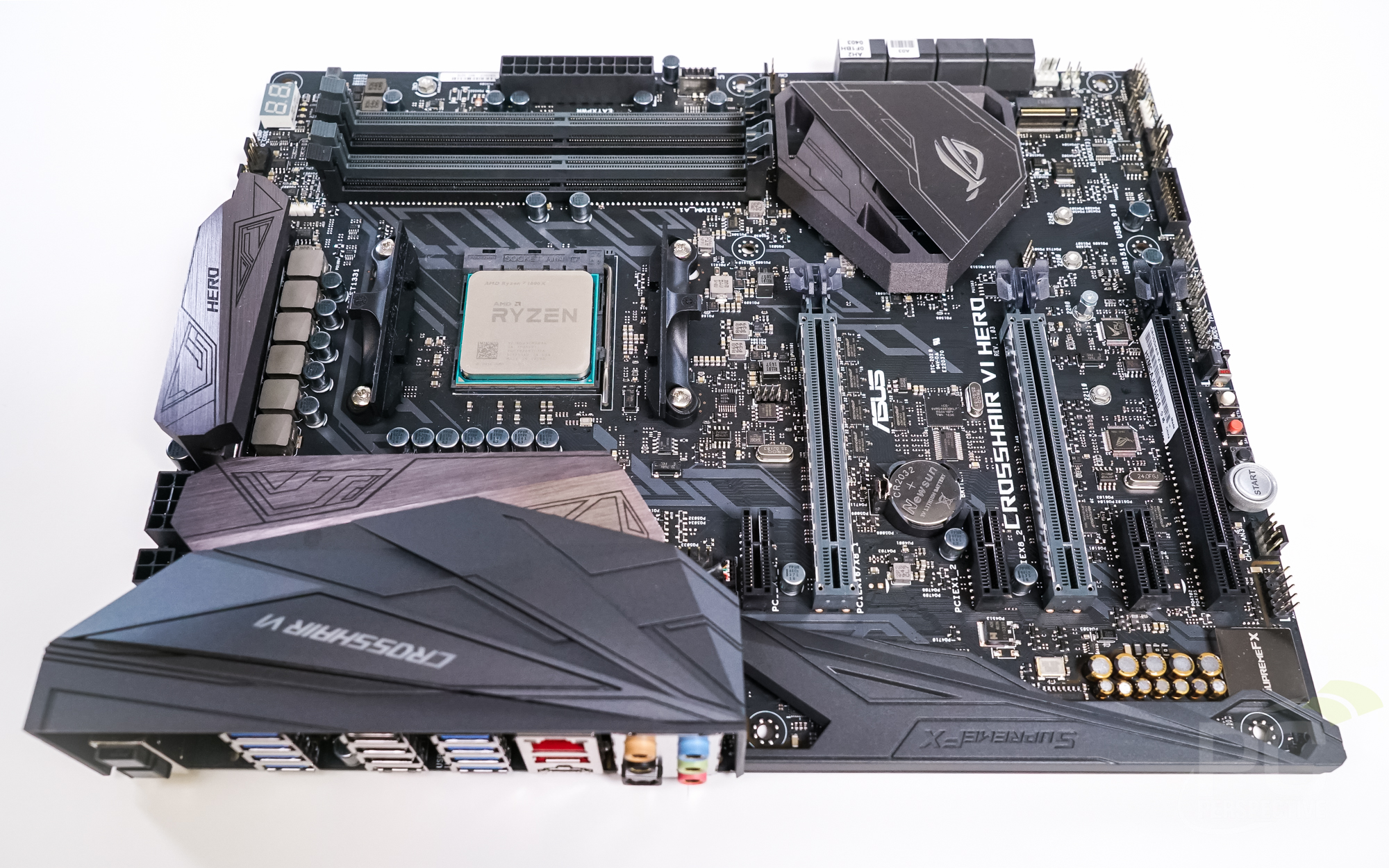 First, let’s start with the motherboard. All of this testing was done on the ASUS Crosshair VI Hero with the latest 5704 BIOS installed. As I began to discover the different overclocking capabilities (BCLK adjustment, multipliers, voltage) I came across one of the ASUS presets. These presets offer pre-defined collections of settings that ASUS feels will offer simple overclocking capabilities. An option for higher BCLK existed but the one that caught my eye was straight forward – 4.0 GHz. 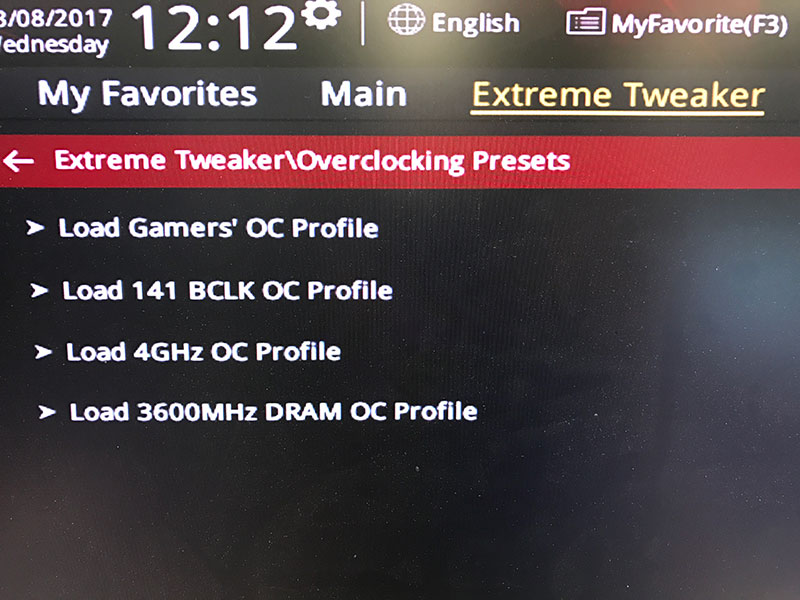 With the Ryzen 1700 installed, I thought I would give it a shot. Keep in mind that this processor has a base clock of 3.0 GHz, a rated maximum boost clock of 3.7 GHz, and is the only 65-watt TDP variant of the three Ryzen 7 processors released last week. Because of that, I didn’t expect the overclocking capability for it to match what the 1700X and 1800X could offer. Based on previous processor experience, when a chip is binned at a lower power draw than the rest of a family it will often have properties that make it disadvantageous for running at HIGHER power. Based on my results here, that doesn’t seem to the case. 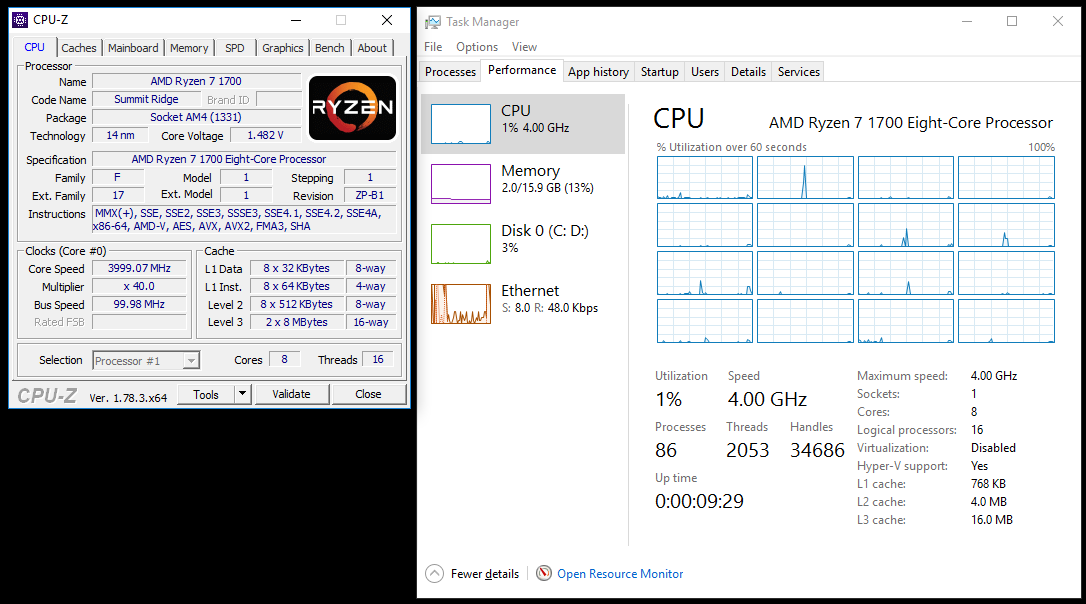 By simply enabling that option in the ASUS UEFI and rebooting, our Ryzen 1700 processor was running at 4.0 GHz on all cores! For this piece, I won’t be going into the drudge and debate on what settings ASUS changed to get to this setting or if the voltages are overly aggressive – the point is that it just works out of the box. 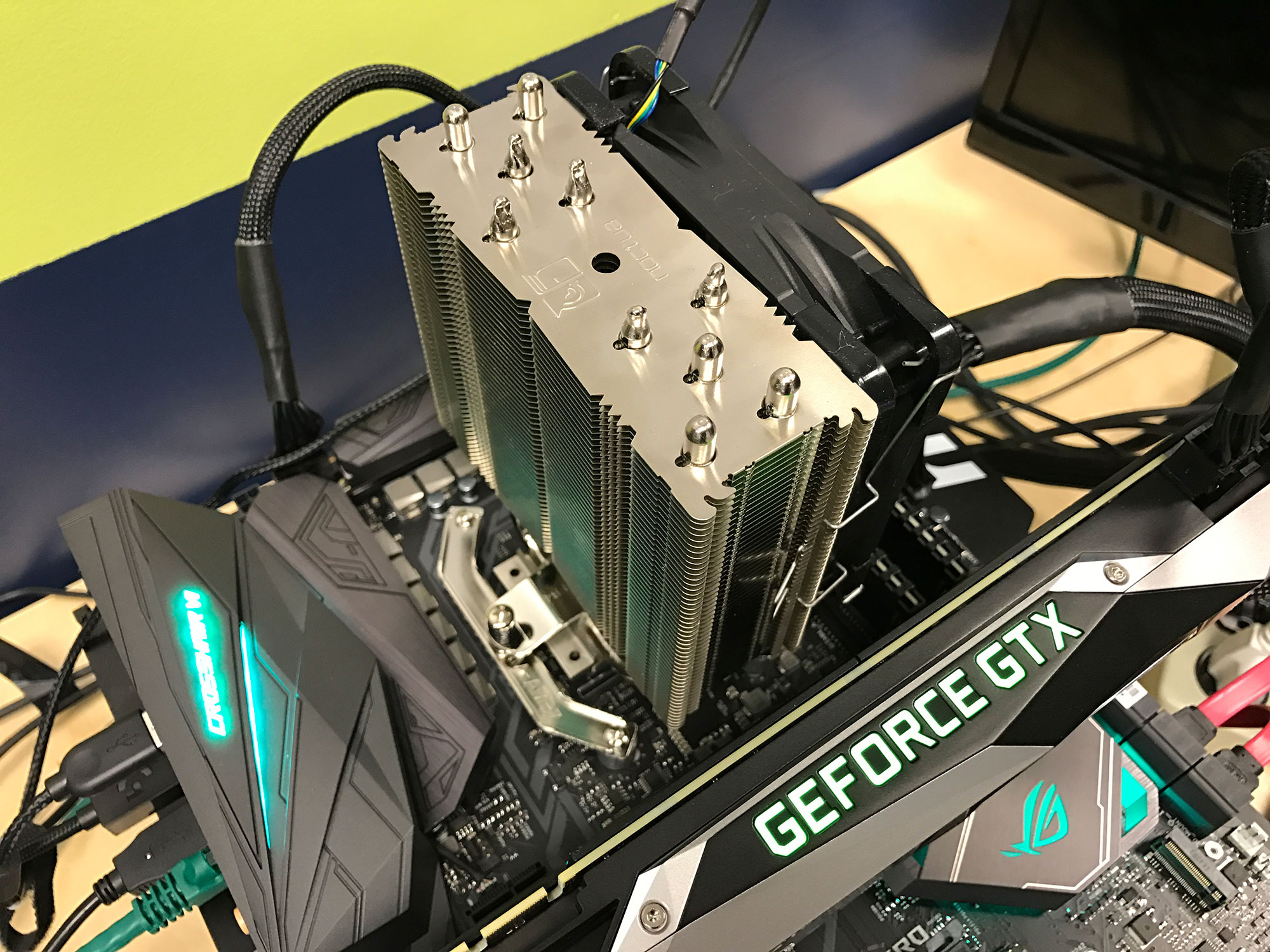 I have been having conversations with AMD, ASUS and other motherboard vendors on the reporting of voltages and temperatures for Ryzen processors (in addition to even clock speed) and the answer at this point is that we just don’t know for sure. CPU-Z is reporting a voltage of 1.482v from the Crosshair VI Hero motherboard when running at 4.0 GHz but I have seen that vary downward to as low as 1.417v, a significant drop if accurate. 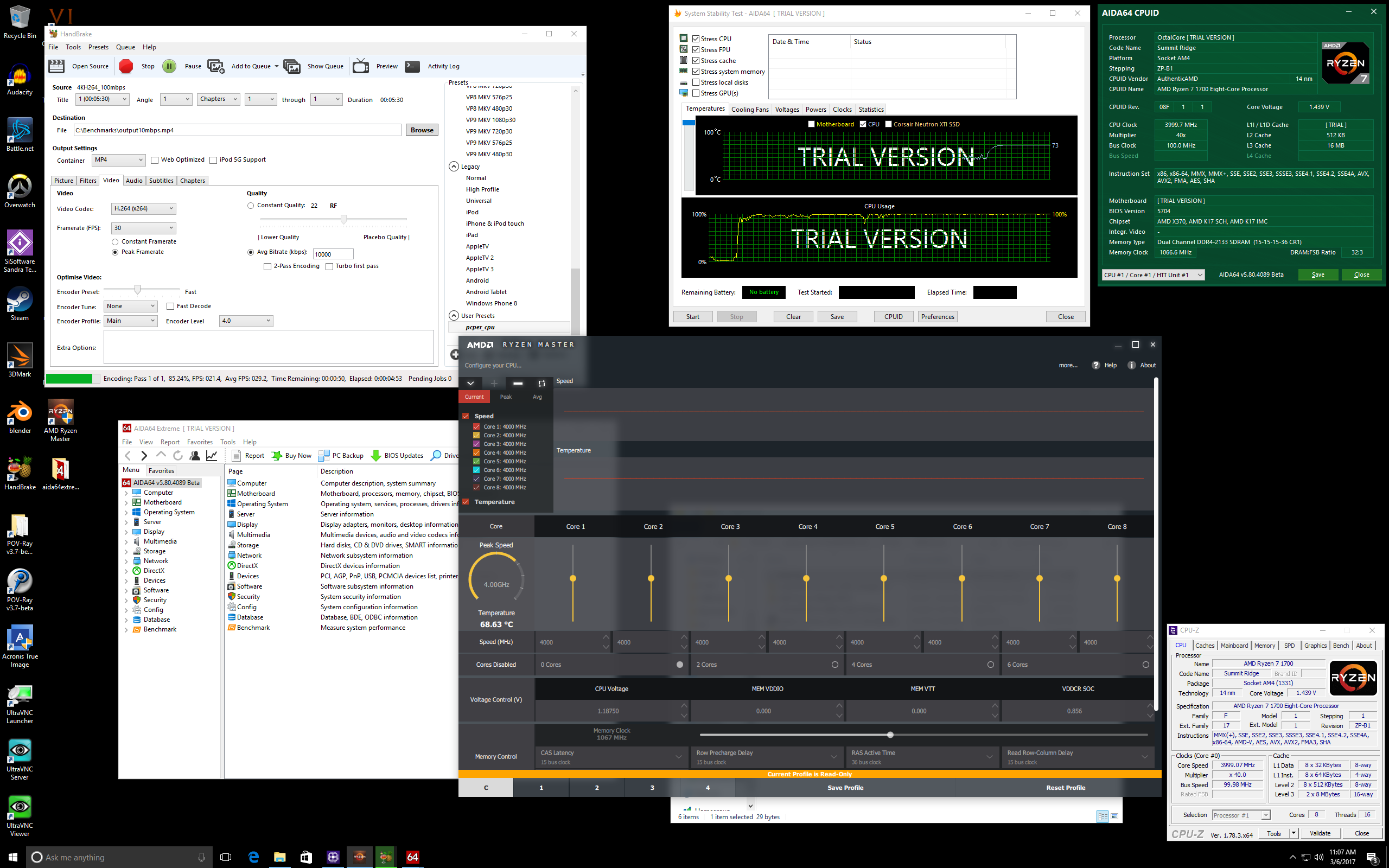 Using the latest beta version of AIDA64 to try to monitor temperatures, the Ryzen processor seems to be running quite cool, only hitting 73C under a full load. Yes, the fan on the cooler is ramping up noticeably, but this result still impresses. Ryzen Master, AMD’s overclocking utility, shows an instantaneous result of 68C but that fluctuates often throughout testing. At idle we appear to be somewhere in the ~40C range, though again the variance over time leaves me to question the accuracy of the reporting. If all of this data is true, then Ryzen 7 runs hot at idle but surprisingly cool when overclocked.

What do we see in terms of performance improvements with this overclock on the lowest cost Ryzen processor? Without spoiling our upcoming 1700X/1700 review, here are a few of the more interesting results. 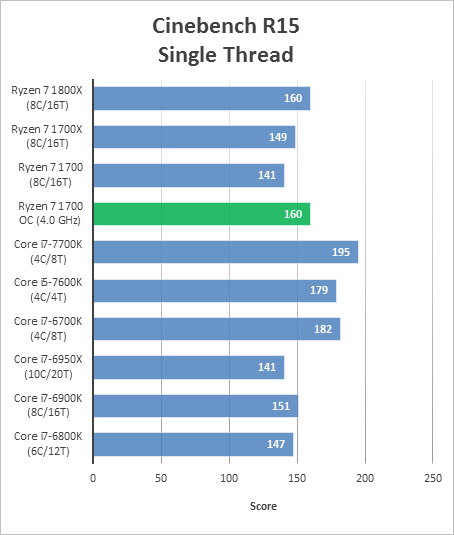 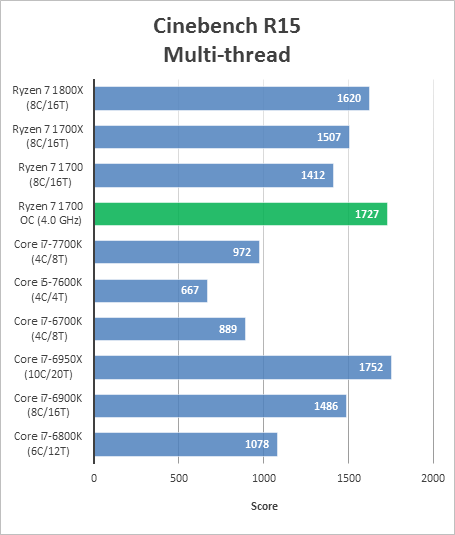 Cinebench R15 continues to be one of the more important benchmarks for our comparisons and the overclocked Ryzen 7 1700 does quite well, able to match the single threaded performance of the 1800X CPU, as you would expect. (The Ryzen 7 1800X has a peak clock of 4.0 GHz.) It still falls well behind that Core i7-7700K but is able to creep ahead of the Broadwell-E processors. For the multi-threaded result, the overclocked part outperforms the stock settings on the Ryzen 7 1800X (though of course you’d be able to overclock it as well), blows by the Core i7-6900K, and nearly catches the 10-core 6950X! 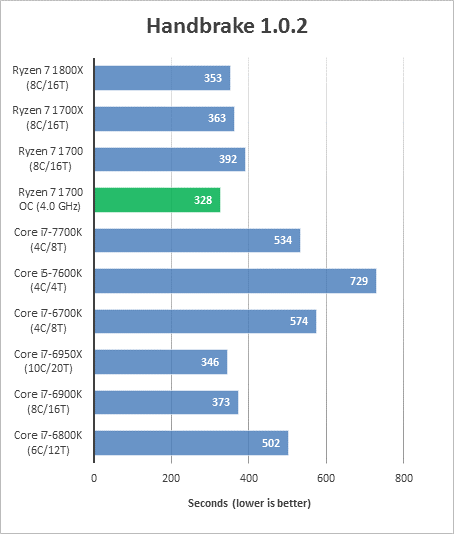 In Handbrake, a real-world example of multi-threaded goodness, the overclocked Ryzen 7 1700 is able to oust every other CPU in our testing at stock settings. For $329, and a little bit of trust in overclocking, this CPU will outperform the $1500+ Core i7-6950X. 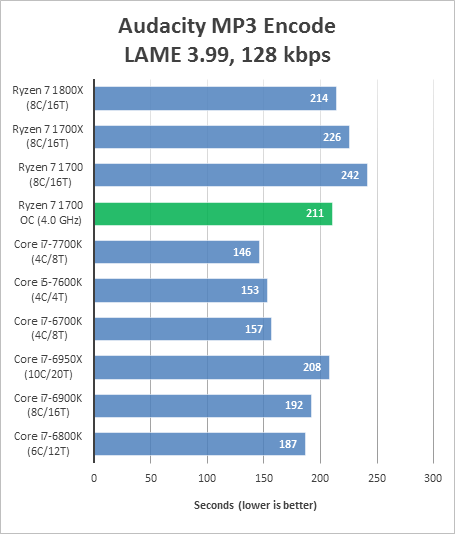 For those single threaded workloads, however, even a 4.0 GHz overclock can’t bridge the gap between Ryzen and Intel’s Core architectures. In this MP3 encoding workload, the 1700 in its overclocked state is the fastest Ryzen processor of the group but is still slower than the entire lineup of Intel processors.

Obviously one of the big discussion points around Ryzen has been on gaming performance, particularly at 1080p. I’m not going to waste time arguing with anyone about the validity of testing games at 1080p (43% of Steam users run at 1080p, only 1.81% at 2560×1440 and 0.69% at 4K) but let’s follow up from our initial gaming results from my Ryzen review and see how the overclocked 1700 performs. 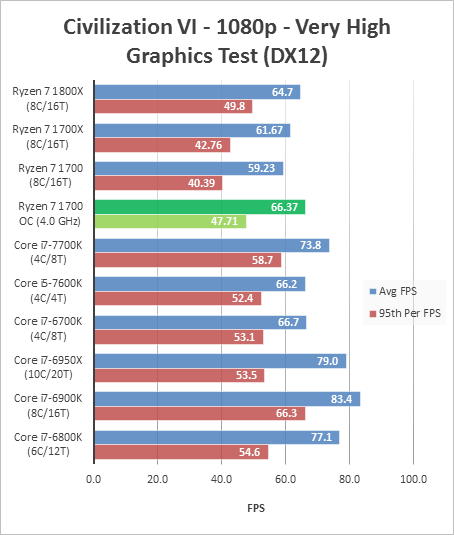 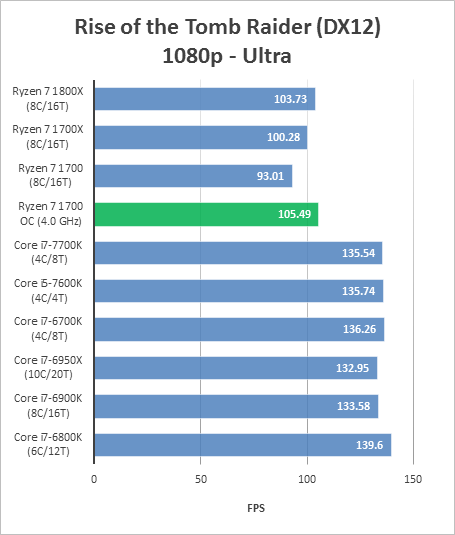 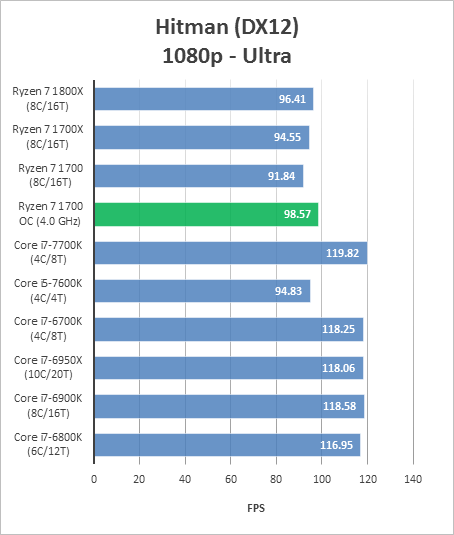 In all three cases, the performance of the Ryzen 7 1700 in its overclocked state is higher than the Ryzen 7 1800X at stock, though the gains are minimal. (It’s under 2% on Rise of the Tomb Raider.) These changes are nowhere near the necessary deltas required to make up for the gaps presented both by the Core i7-7700K Kaby Lake CPU or the Broadwell-E based parts.

One more thing: power consumption SKY ROCKETS when you take this Ryzen 7 1700 to 4.0 GHz through the ASUS preset! 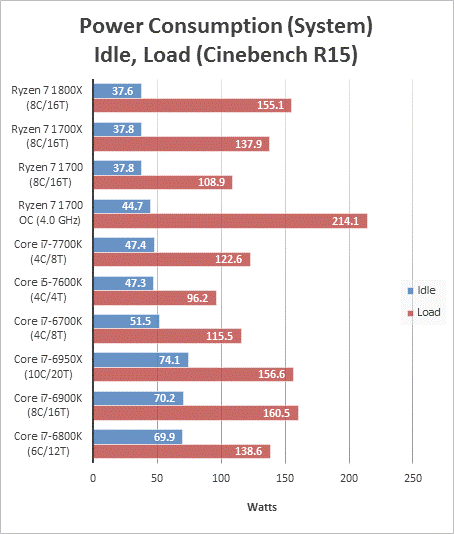 At stock settings, the Ryzen 7 1700 system draws 108 watts but when overclocked, that peaks at 214 watts! That’s a gain of 106 watts over the 65-watt TDP that the part is rated at. Even compared to the Ryzen 7 1800X at stock settings, a 95 watt rated processor, the overclocked CPU pulls 55 watts more power. That kind of increase in power draw is one of the main reasons I doubt the temperature readings from AIDA64 and the BIOS/UEFI itself. But our system was stable at these speeds and settings for entire gaming and rendering sessions.

This kind of power consumption level is a product of the high voltage ASUS has the CPU running at. But, if this is the voltage requried to meet 4.0 GHz on all cores, then the results are an important data point for Ryzen going forward.

It seems likely that we are seeing the limits of the Zen design on the Global Foundries process technology and it explains why even the best case scenarios with standard air or water cooling are showing limits of 4.1-4.2 GHz on Ryzen CPUs.

I still have a lot of questions to be answered surrounding the current performance and infrastructure for AMD Ryzen CPUs, but my time overclocking with the Ryzen 7 1700 has given me reason to believe AMD has a solid solution on its hands. For those enthusiasts and gamers that are willing to get their hands dirty with some overclocking, and that it seems all Ryzen processors perform similarly when it comes to headroom, buying the lowest priced part for your next productivity rig is an excellent option. Thanks to the ease of access to a 4.0 GHz preset from ASUS, the $329 Ryzen 7 1700 was able to match or slightly exceed the single threaded performance of the $499 1800X. For multi-threaded workloads, it offers even more of an advantage.

Yes, you could easily overclock the Ryzen 7 1800X to 4.0 GHz (or 100-200 MHz higher) but saving $170 that you could put toward a GPU, an SSD or any other purpose for likely the exact same experience is enticing. The non-gaming performance is damned impressive with this part for workloads like encoding, rendering, etc. The gaming performance at 1080p is still in question, but if you plan to game at 2560×1440 or 4K, your results should be much better.

If you are planning on investing in a Ryzen 7 system any time soon, the Ryzen 7 1700 is probably your best option.

Just how does a 5GHz AMD chip perform?