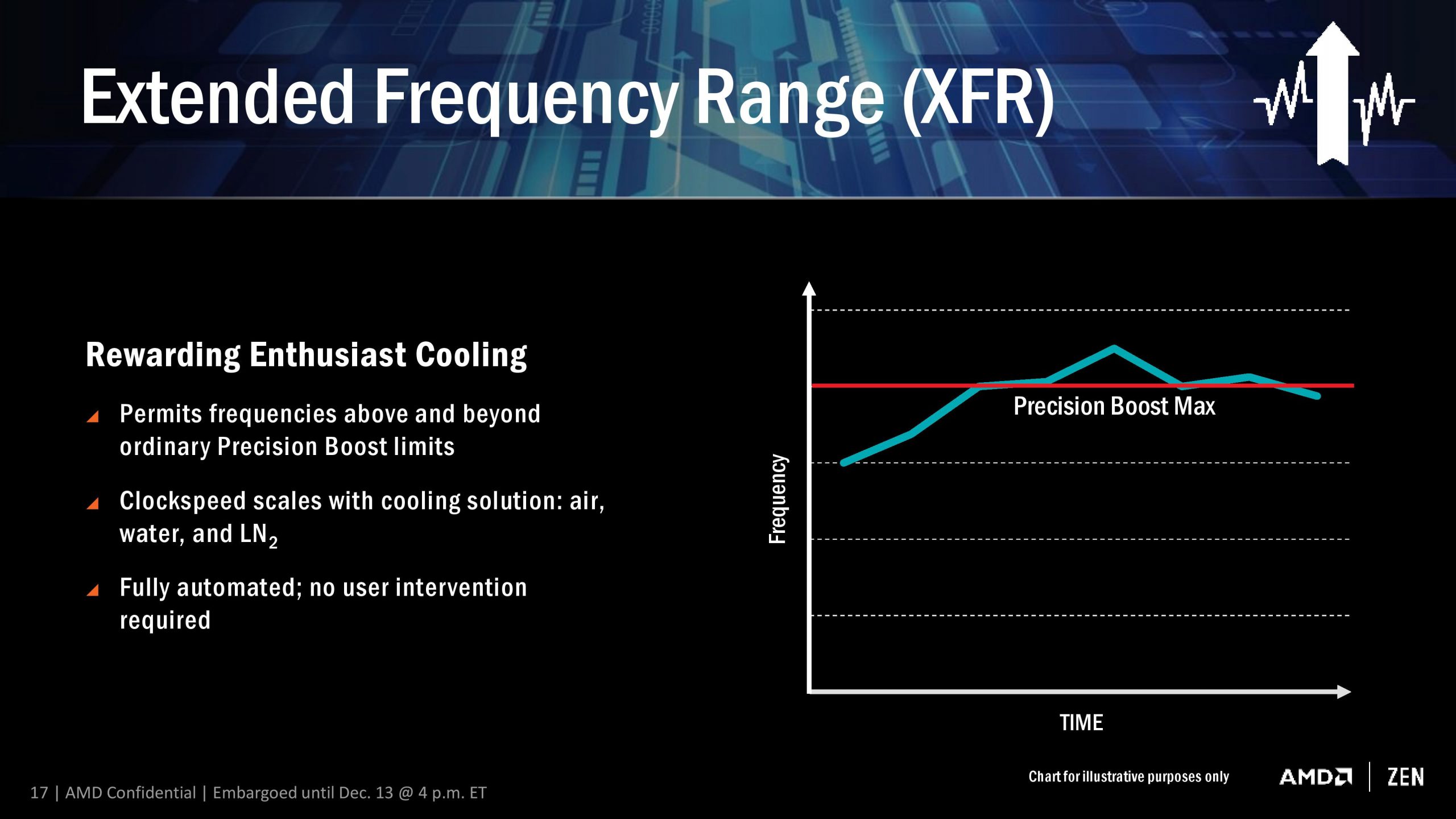 Following the leaks and official news and reviews of AMD's Ryzen processors there were a few readers asking for clarity on the eXtended Frequency Range (XFR) technology and whether or not it is enabled on all Ryzen CPUs or only the X models. After quite a bit of digging through forums and contradictory articles, I believe I have the facts in hand to answer those questions. In short, XFR is supported on all Ryzen processors (at least all the Ryzen 7 CPUs released so far) including the non-X Ryzen 7 1700; however the X SKUs get a bigger boost from XFR than the non-X model(s).

Specifically, the Ryzen 7 1700X and Ryzen 7 1800X when paired with a high end air or water cooler is able to boost up to an additional 100 MHz over the 4 GHz advertised boost clock while the Ryzen 7 1700 is limited to an XFR boost of up to 50 MHz so long as there is thermal headroom. Interestingly, the Extended Frequency Range boosts are done in 25 MHz increments (and likely achieved by adjusting the multiplier by 0.25x).

How does this all work though? Well, with Ryzen AMD introduced a new suite of technologies it calls "SenseMI" which, despite the questionable name (heh), puts a lot of intelligence into the processor and builds on the paths AMD started down with Carrizo and Excavator designs. The five main technologies are Pure Power, Precision Boost, Extended Frequency Range (XFR), Neural Net Prediction, and Smart Prefetch. The first three are important when talking about XFR.

With Ryzen AMD has embedded a number of sensors throughout the chip that accurately measure temperatures, clock speeds, and voltages within 1°C, 1mA, 1mW, 1mV and it has connected all the sensors together using its Infinity Fabric. Pure Power lets AMD make localized adaptive adjustments to optimize power usage without negatively affecting performance. Precision Boost is AMD's equivalent to Intel's Turbo Boost and it is built on top of Pure Power's sensor network. Precision Boost enables a Ryzen CPU to dynamically clock up beyond the base clock speed across all cores or clock even further across two cores. Lightly threaded workloads will benefit from the latter while workloads using any more than two threads will get the all core boost, so there is not a lot of granularity in number of cores vs allowed boost but there does not really need to be and the Precision Boost is more granular than Intel's Turbo Boost in clock speed bumps of 25MHz increments versus 100 MHz increments up to the maximum allowed Precision Boost clock. As an example, the Ryzen 7 1800X has a base clock of 3.6 GHz and so long as there is thermal headroom it can adjust the clock speed up by 25 MHz steps to 3.7 GHz across all eight cores or up to as much as 4.0 GHz on two cores.

From there XFR allows the processor to clock beyond the 2 core Precision Boost (XFR only works to increase the boost of the two core turbo not the all core turbo) and as temperatures decrease the allowed XFR increases. While initial reports and slides from AMD suggested XFR would scale with the cooler (air, water, LN2, LHe) with no upper limit aside from temperature and other sensor input, it appears AMD has taken a step back and limited X series Ryzen 7 chips to a maximum XFR boost of 100 MHz over the two core Precision Boost and non-X series Ryzen 7 processors to a maximum XFR boost of 50 MHz over the maximum boosted two core clock speed. The Ryzen 7 1700 will have two extra steps above its two core boost so while the chip has a base clock of 3.0 GHz, Precision Boost can take all eight cores to 3.1GHz or two cores to 3.7 GHz. Further, so long as temperatures are still in check XFR can take those two boosted cores to 3.75 GHz. 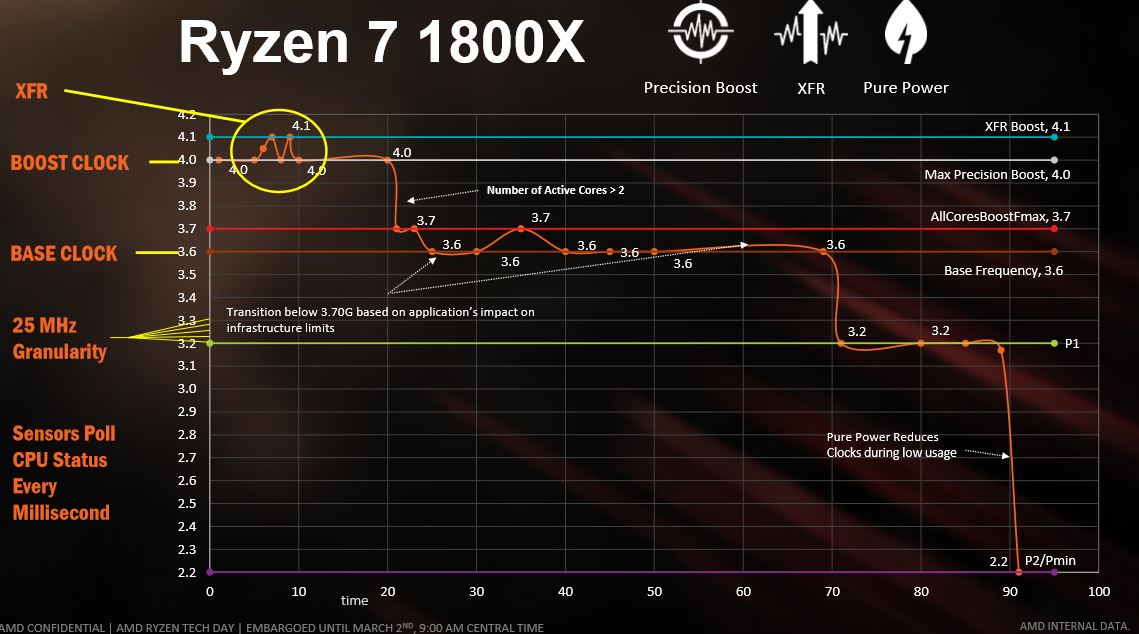 XFR will be a setting that you are able to toggle on and off via a motherboard setting, and some motherboards may have the feature turned on by default. Unfortunately, if you choose to manually overclock you will lose XFR functionality (and boost). Further, Precision Boost and XFR are connected and you are not able to turn off one but not the other (you either get both or nothing). Note that if you overclock using AMD's "Ryzen Master" software utility, it will also disable Precision Boost and XFR, but the lower power C-states will stay enabled which may be desirable if you want the power bill and room to cool down when not gaming or creating content.

I would expect as yields and the binning processes improve for Ryzen AMD may lift or extend the XFR limits either with a product refresh (not sure if a micro-code update would be possible) or maybe only in the upcoming hexa-core and quad core Ryzen 5 and Ryzen 3 processors that have less cores and more headroom for overclocking. That is merely speculation however. Ryzen 5 and Ryzen 3 should support XFR on both X and non-X models, but it is too early to know or say what the XFR boost will be.

XFR is neat though not as big of a deal as I originally thought it to be without limits, and as many expected manual overclocking is still going to be the way to go. This is not all bad news though, because it means that the much cheaper Ryzen 7 1700 just got a lot more attractive. You give up a 50 MHz XFR boost that you can't use anyway because you are going to manually overclock and you gamble a bit on getting a decently binned chip that can hit R7 1800X clock speeds, but you save $170 that you can put towards a better motherboard or a better graphics card (or a second one for CrossFire – even on B350).

I am still waiting on our overclocking results as well as Kyle's overclocking results when it comes to the Ryzen 7 1700, but several other sites are reporting success at hitting at least 4.0 GHz (though not many results over 4.0 or 4.1 GHz which isn't unexpected since these are not the highest binned chips and yields are still young so bins are more real/based on silicon and not just for product segmentation but most can hit the higher speeds at x power, v voltage, and n temperature et al). For example, Legit Reviews reports that they were able to hit manually overclock a R7 1700 to 4.0 GHz on all cores at 1.3875 volts. They were able to keep the non-X Ryzen chip stable with those settings on both aftermarket air and AIO water coolers.

More on overclocking: Tom's Hardware has posted that, according to AMD, the safe voltage ceiling for overclocking is 1.35V if you want the CPU to last, but that up to 1.45V CPU voltage is "sustainable". Further, note that is is recommended not to set the SOC Voltage higher than 1.2 volts. Also, much like Intel's platform, it is possible to adjust the base clock (BCLCK) but you may run into stability problems with the rest of the system if you push this too far outside expected specifications (PC Gamer claims you can set this up to 140 MHz though so AM4/Ryzen may be more forgiving in this area than Intel. Edit: The highest figure I've seen so far is 106.4 MHz being stable before the rest of the system gets too far out of spec and becomes unstable. The main benefit to adjusting this is to support overclocked RAM above 3200 MHz so unless you need that your overclocking efforts are probably better spent adjusting the multiplier. /edit). Finally, when manually overclocking you will be able to turn off SMT and/or turn off cores in 2s (e.g. disable 2 cores or disable 4 cores, you can't disable in single numbers but groups of two).

Hopefully this helps to clear up the XFR confusion. If you do not need guaranteed clocks with a bonus XFR boost for a stable workstation build, saving money and going with the Ryzen 7 1700 and manually overclocking it to at least attempt to reach R7 1700X or 1800X speeds seems like the way to go for enthusiasts that are considering making the jump to AM4 especially if you enjoy tinkering with things like overclocking. There's nothing wrong with going with the higher priced and binned chips if you want to go that route, but don't do it for XFR in my opinion.

What are your thoughts? Are you planning to overclock your Ryzen CPU or do you think the Precision Boost and XFR is enough?