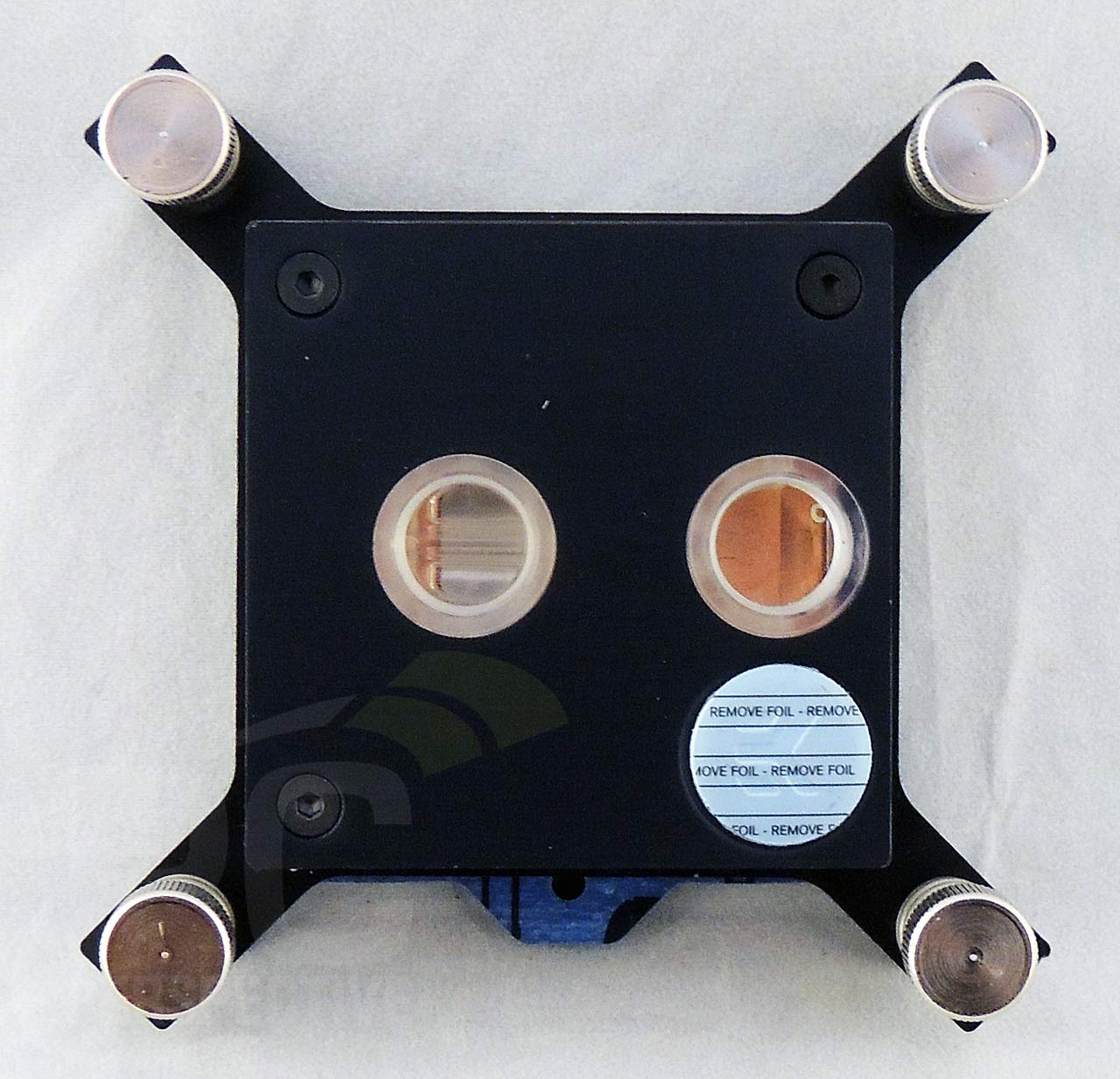 The EK Supremacy MX CPU waterblock is a square copper and plexi-based unit with a factory installed CPU mounting kit (in this case, the Intel-based kit). The block is a layered construction consisting of a black aluminum cover plate, a clear plexi top plate, and a copper bottom plate. The inlet port is the center-left port with the block oriented so that the corporate logo is in the lower right corner of the block. 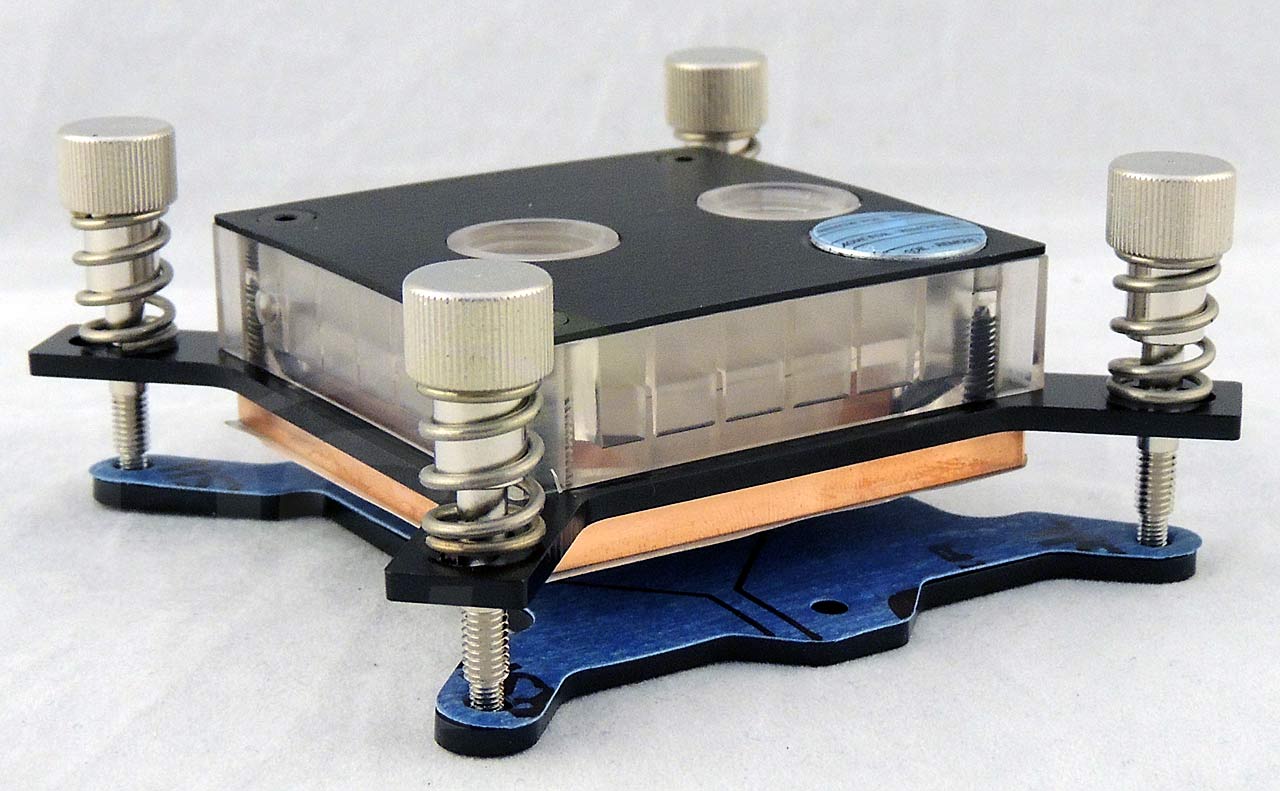 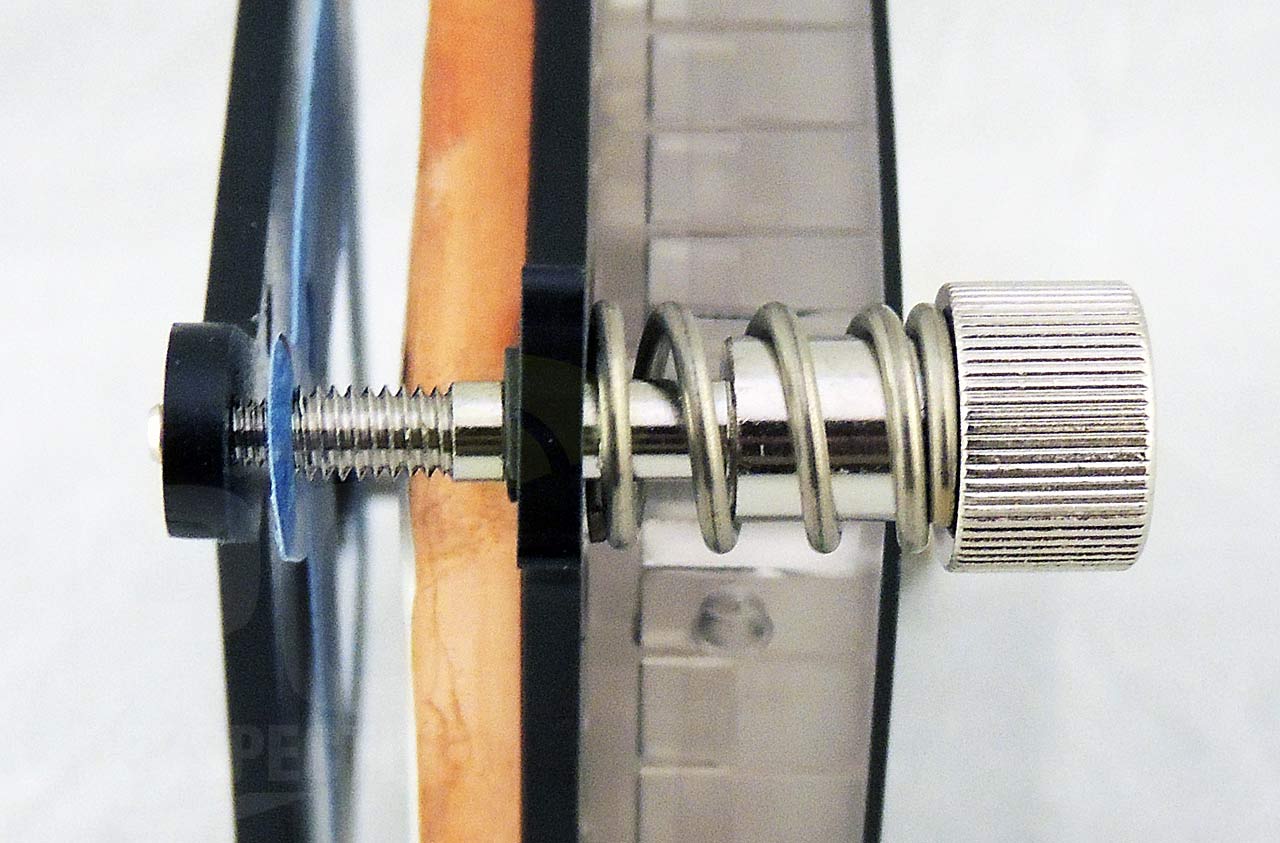 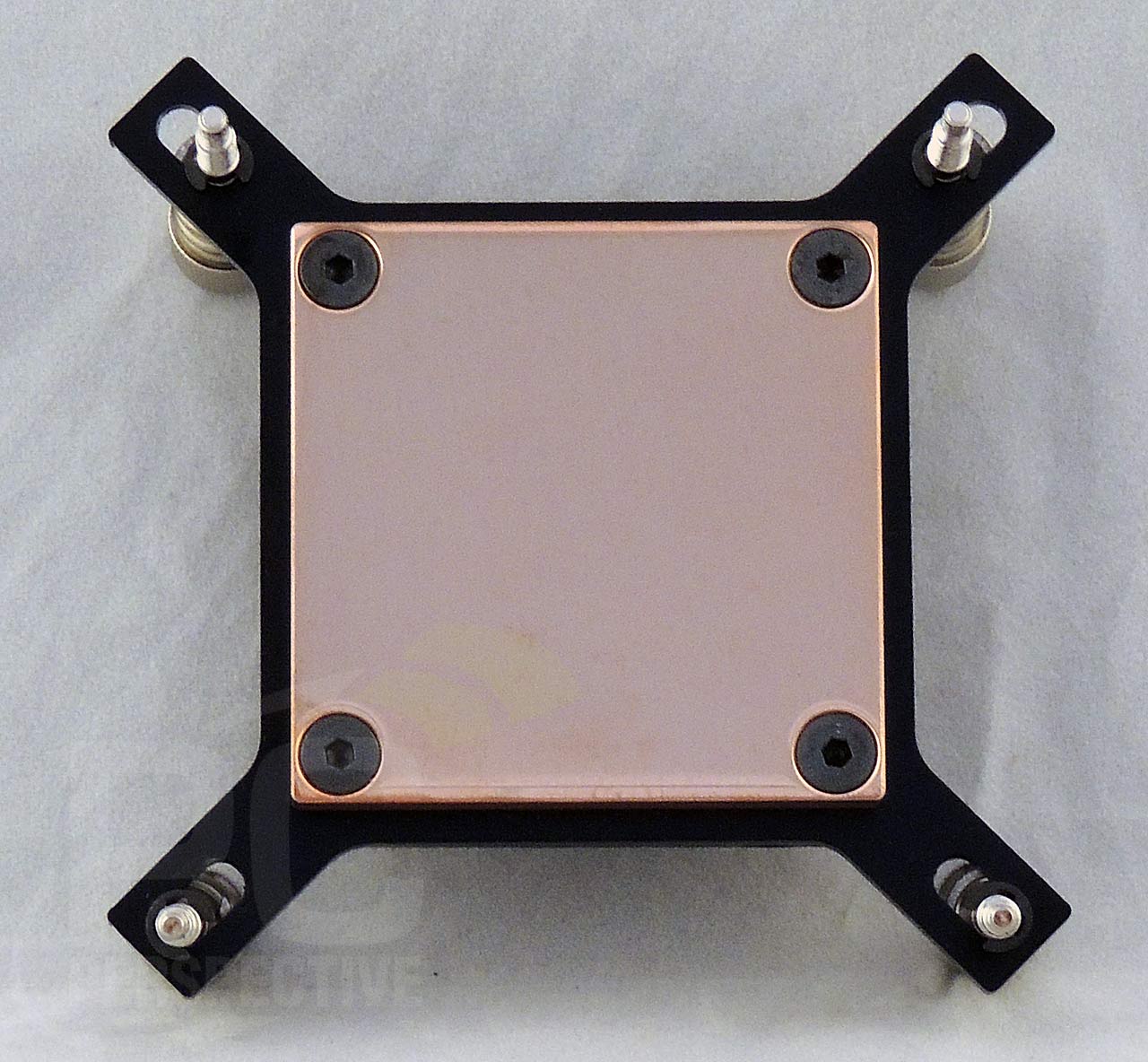 The bottom of the Supremacy MX CPU block is a cleanly machined copper plate, polished to a mirror-like sheen. There was no evidence of machining marks in the surface of the review sample, making for an ideal mating surface with the CPU. The copper base plate mates with the plexi top via the four hex-headed steel screws in the corners of the base plate. The mount screws fit flush into surface indentions so they do not hamper block to CPU surface mating.

Note that in the pictures shown for the Z170 and X99 board mountings, the Supremacy MX block is shown with the copper Supremacy EVO top plate instead of the default plexi top plate and aluminum cover. This is because of complications encountered during testing requiring a new top to be used with the block. Further details concerning these "complications" will be provided later in the review. 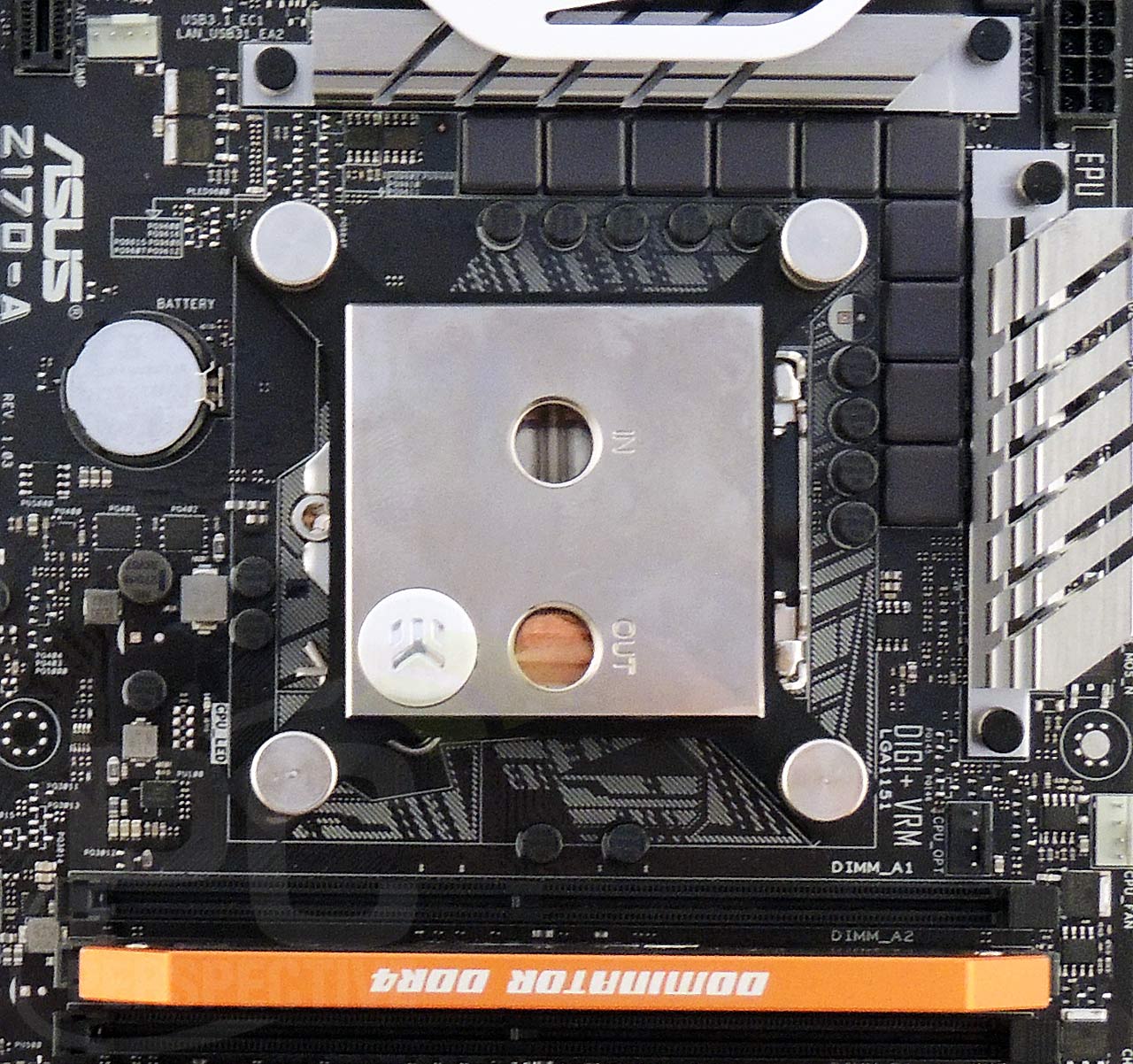 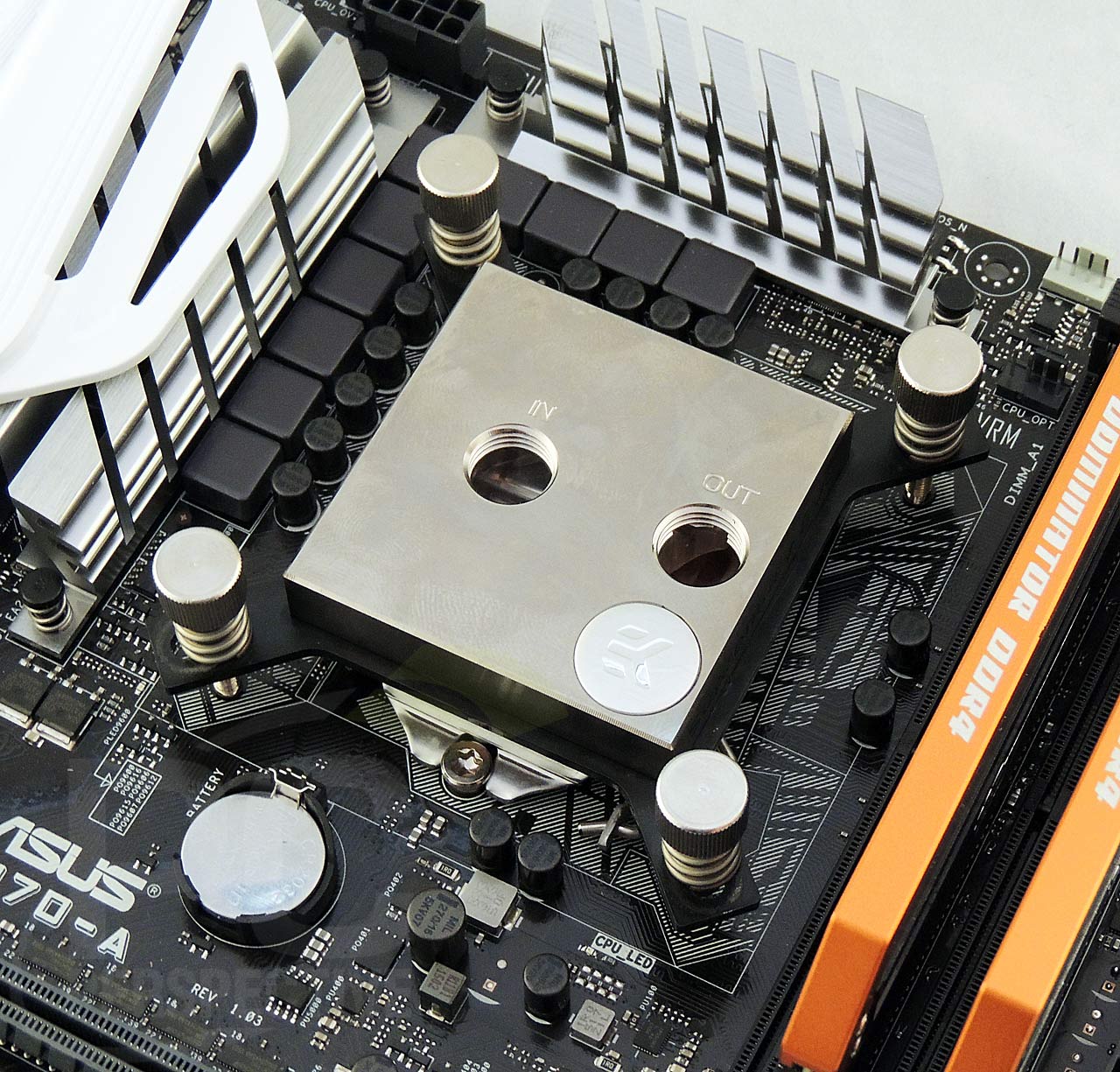 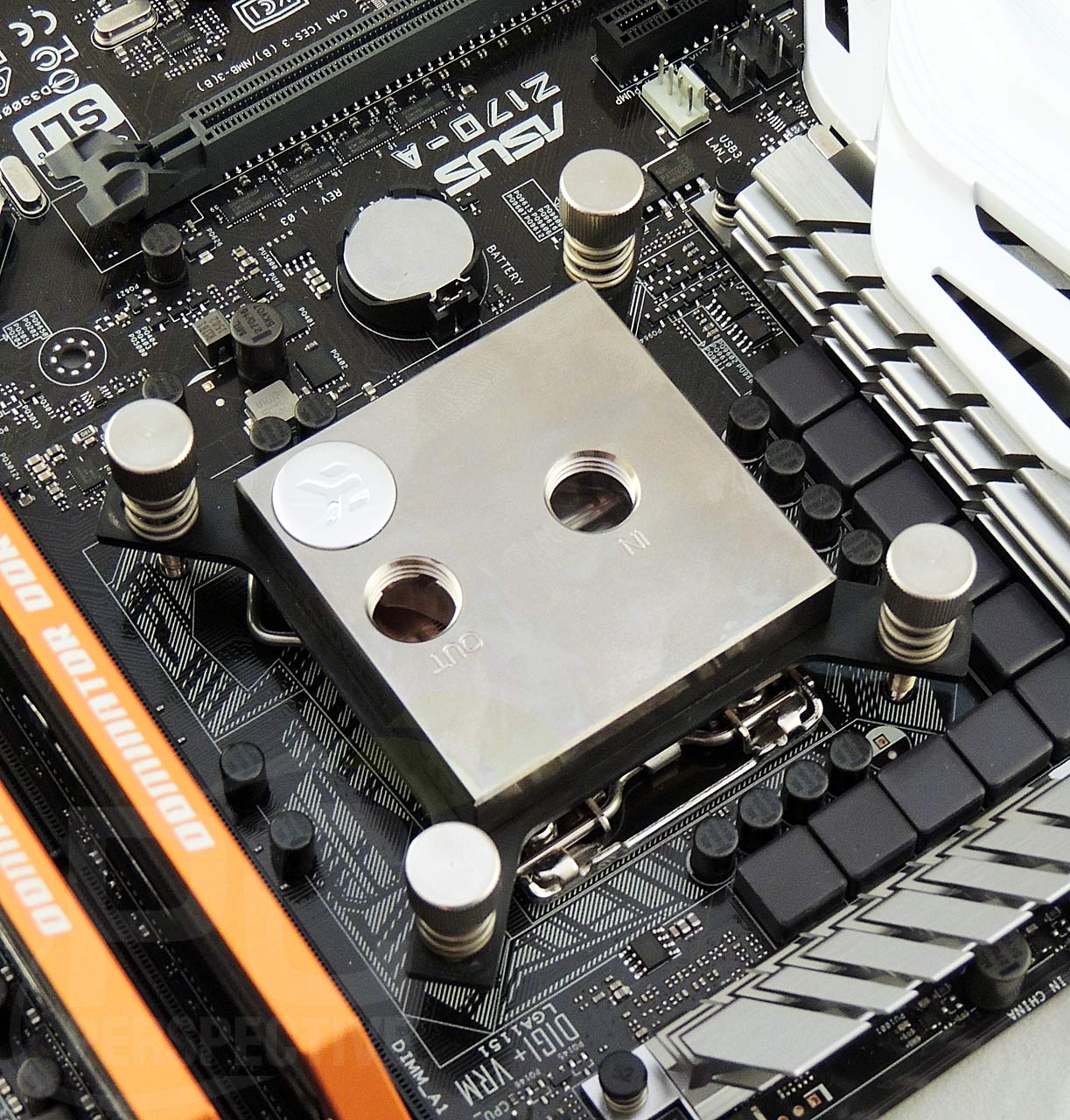 When mounted to a Z170-style motherboard, the Supremacy MX CPU block fits perfectly into the allocated space with no tight areas along any sides of the block. You should have absolutely no problem mounting this block on any LGA115X-style board. The minimalistic style of the mounting bracket (as well as its thin design) ensures that it will not get caught on any close proximity components, with its height more than adequate to ensure this as well. Note that the block is mounted to the board in its default configuration. 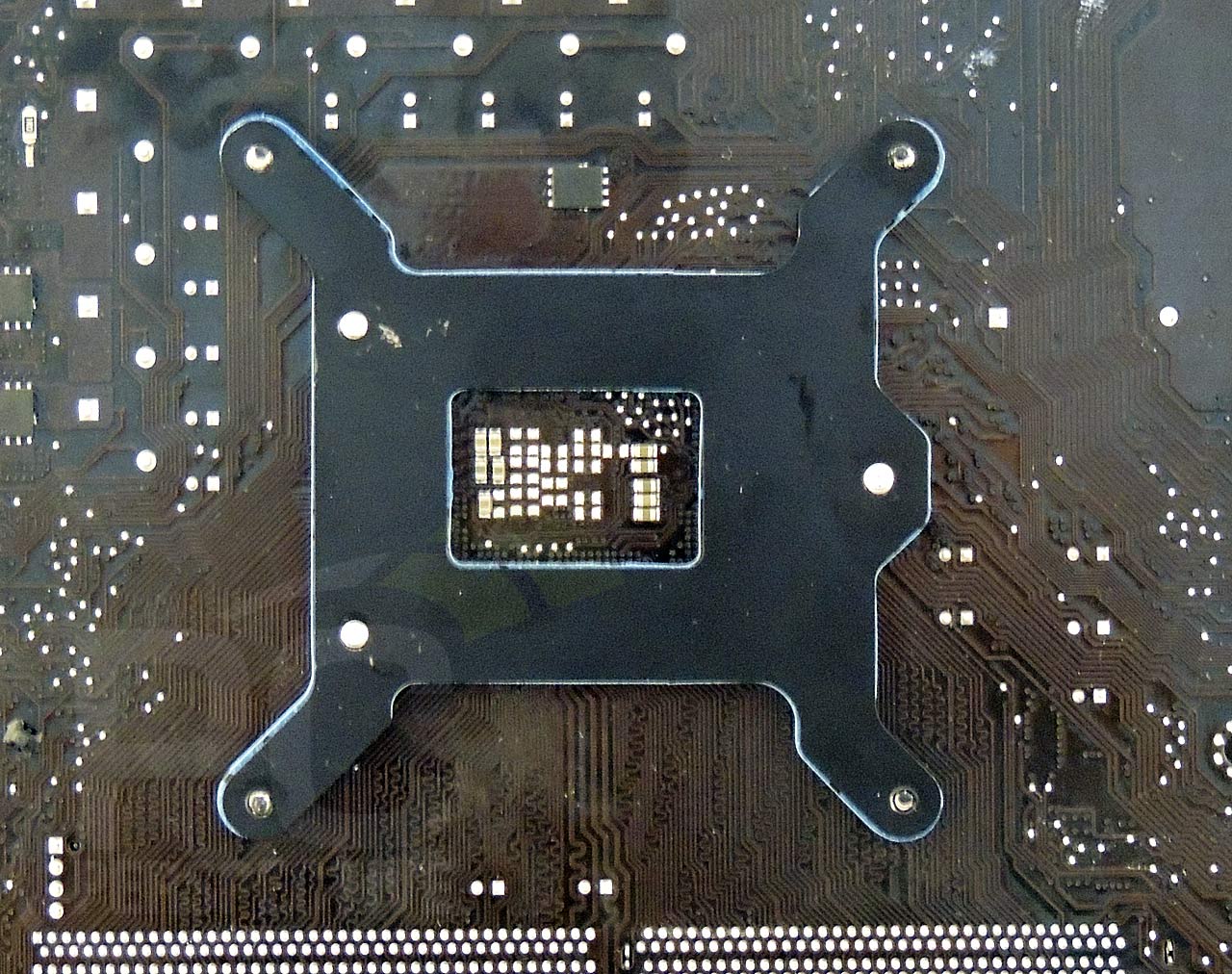 The block mounts to the CPU though uprights screwed into the underside baseplate. The EK-provided baseplate does not sit on top of the motherboard's socket back plate, but instead replaces the back plate entirely. To fix the block's back plate in place, you must remove the motherboard's back plate screws from the top of the socket carefully. This must be done very carefully to ensure that no damage is done to the socket pins. Once the screws are undone, remove the default back plate, install the EK back plate and gasket, and then install the screws back into the socket assembly through the top of the board. I don't particularly like this mounting mechanism because of the risk involved with switching out the backplate, but this ensures that the EK backplate is very securely mounted and will not shift while securing the block's thumbscrews to the back plate. Mounting the base plate did not pose any problems with the test board used, but could become problematic if there are any components in close proximity to the area behind the CPU socket. 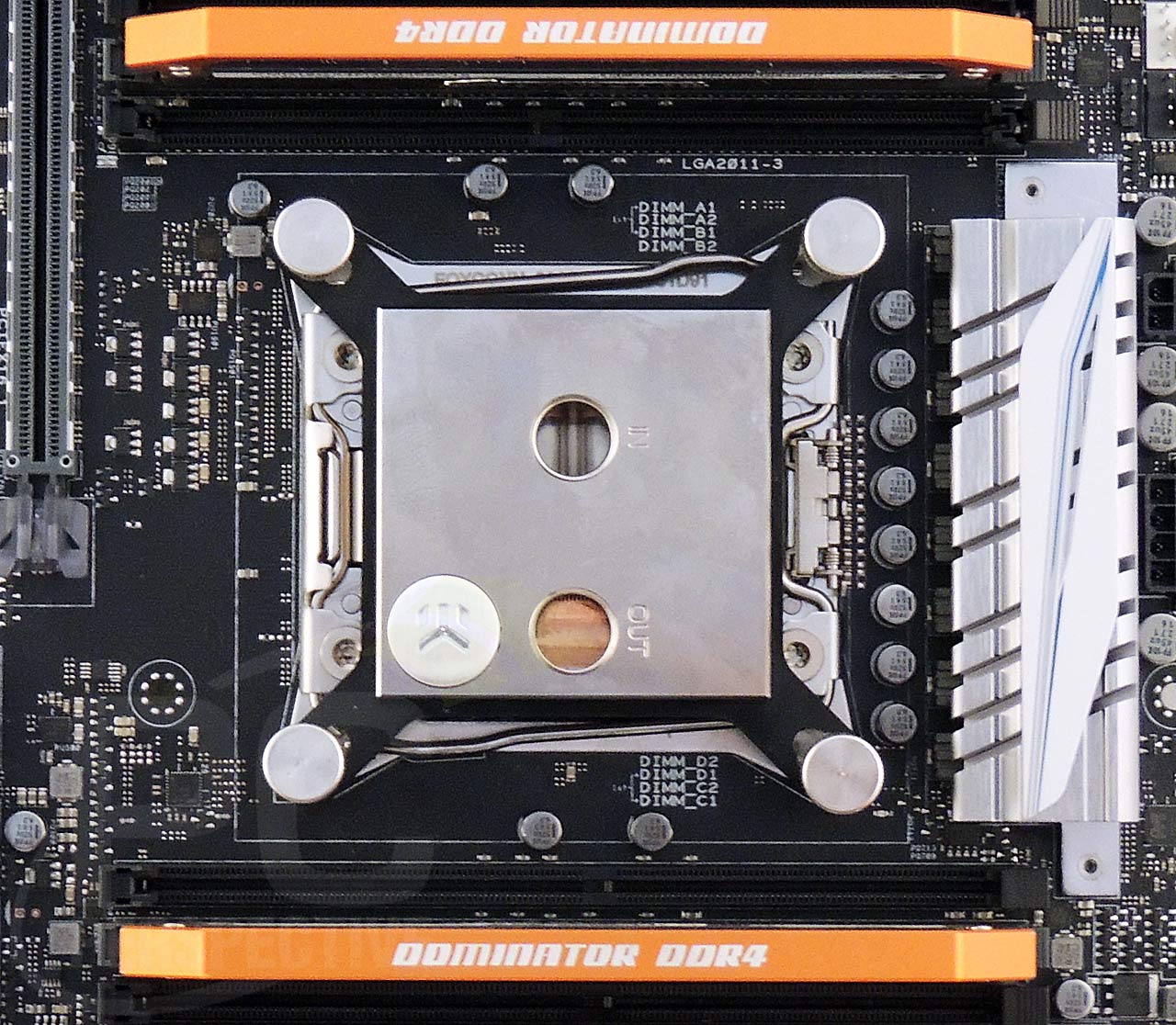 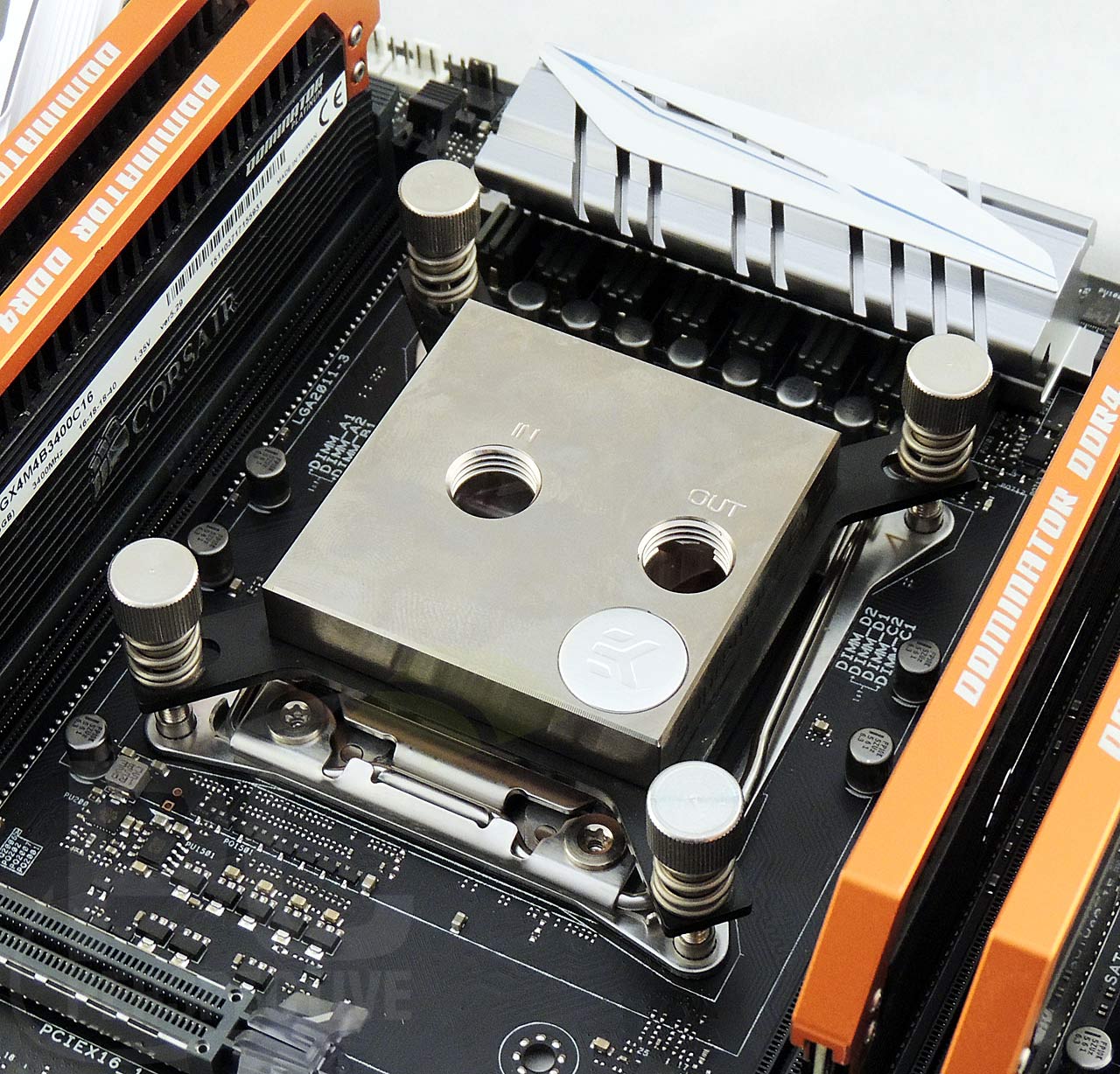 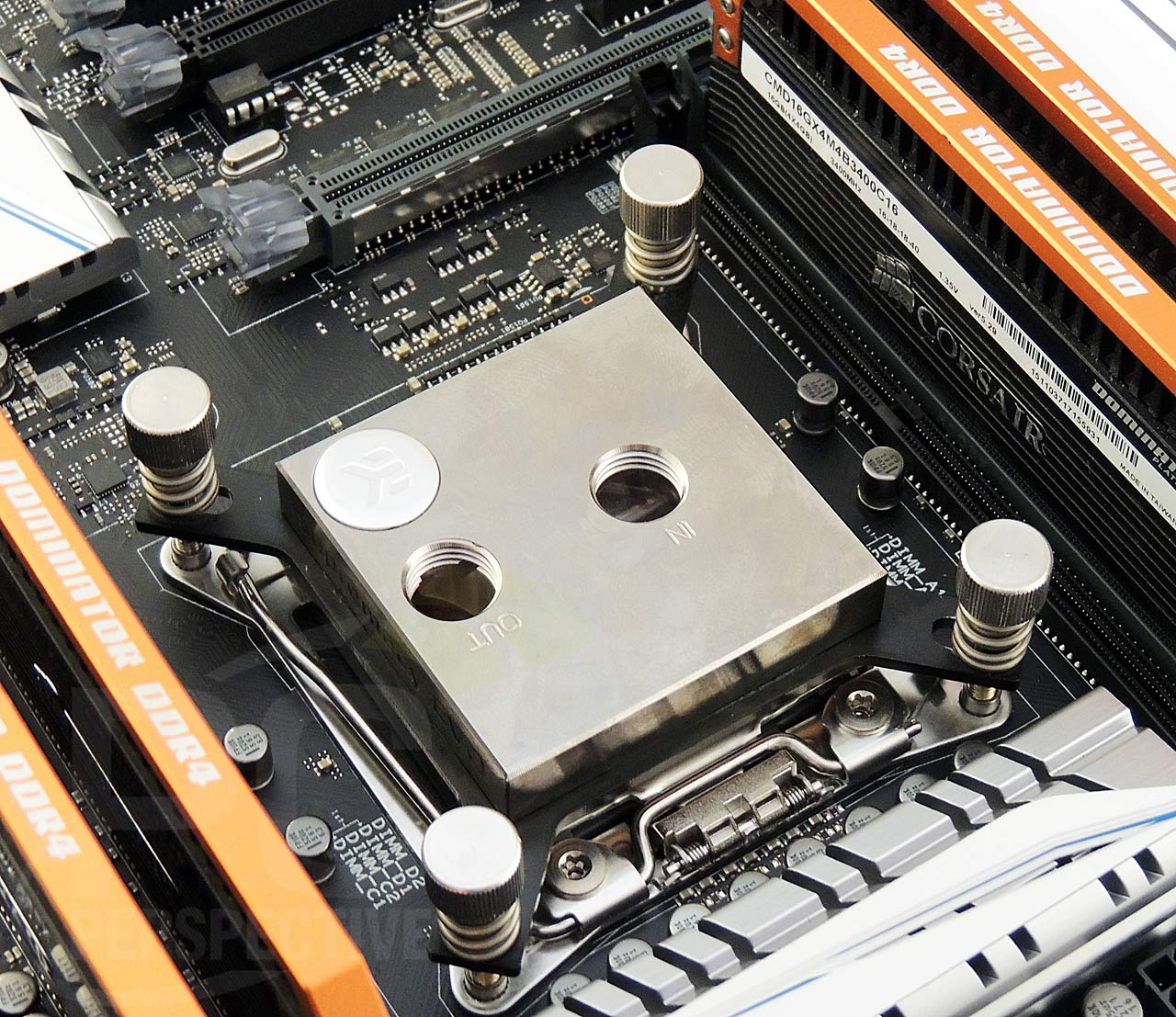 The X99 motherboard's socket posed no fit issues for the Supremacy MX CPU block with it fitting easily in the space allocated between the upper and lower set of DIMMs. The block should fit easily to any X99-based board and not inhibit the use of any of the board's DIMM slots. Further, its minimal footprint should pose no problems to heat sinks mounted to the right of left of the socket. The board used for testing demonstrates how much room exists betweeen the right VRM sink and the block. The block mounts to the board in a similar fashion to that seen on the Z170 board with the only difference being the upright mounting method. The uprights thread directly into the X99 CPU socket, instead of requiring a separate underside baseplate. Note that the block is mounted to the board in its default orientation.

In addition to the waterblock assembly, EK includes all necessary accessories to get the block running on any of the block's supported platform. Because of the factory built mount, EK offers diffent block version via retail for Intel and AMD type sockets. However, mount kits are offered for purchase as well. 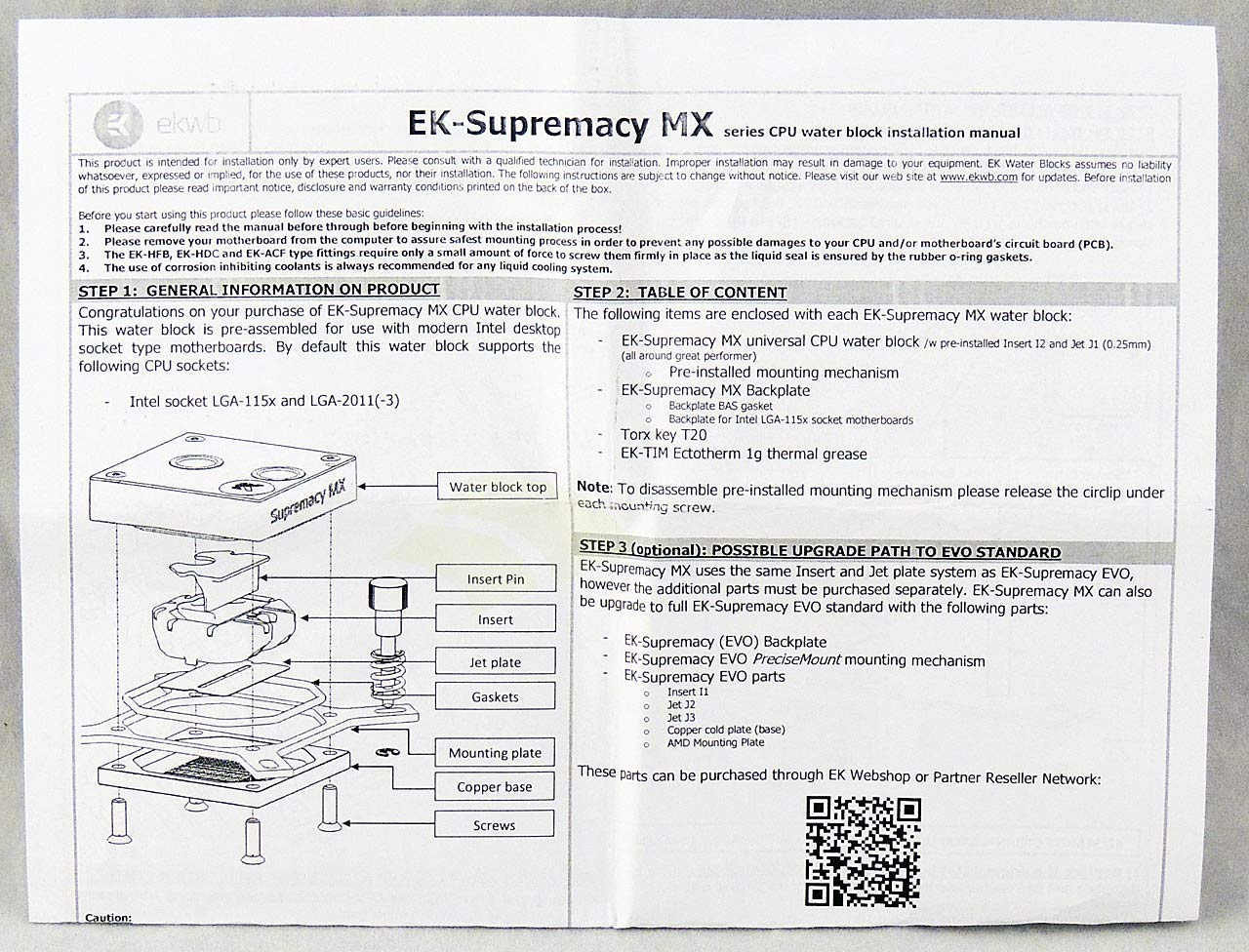 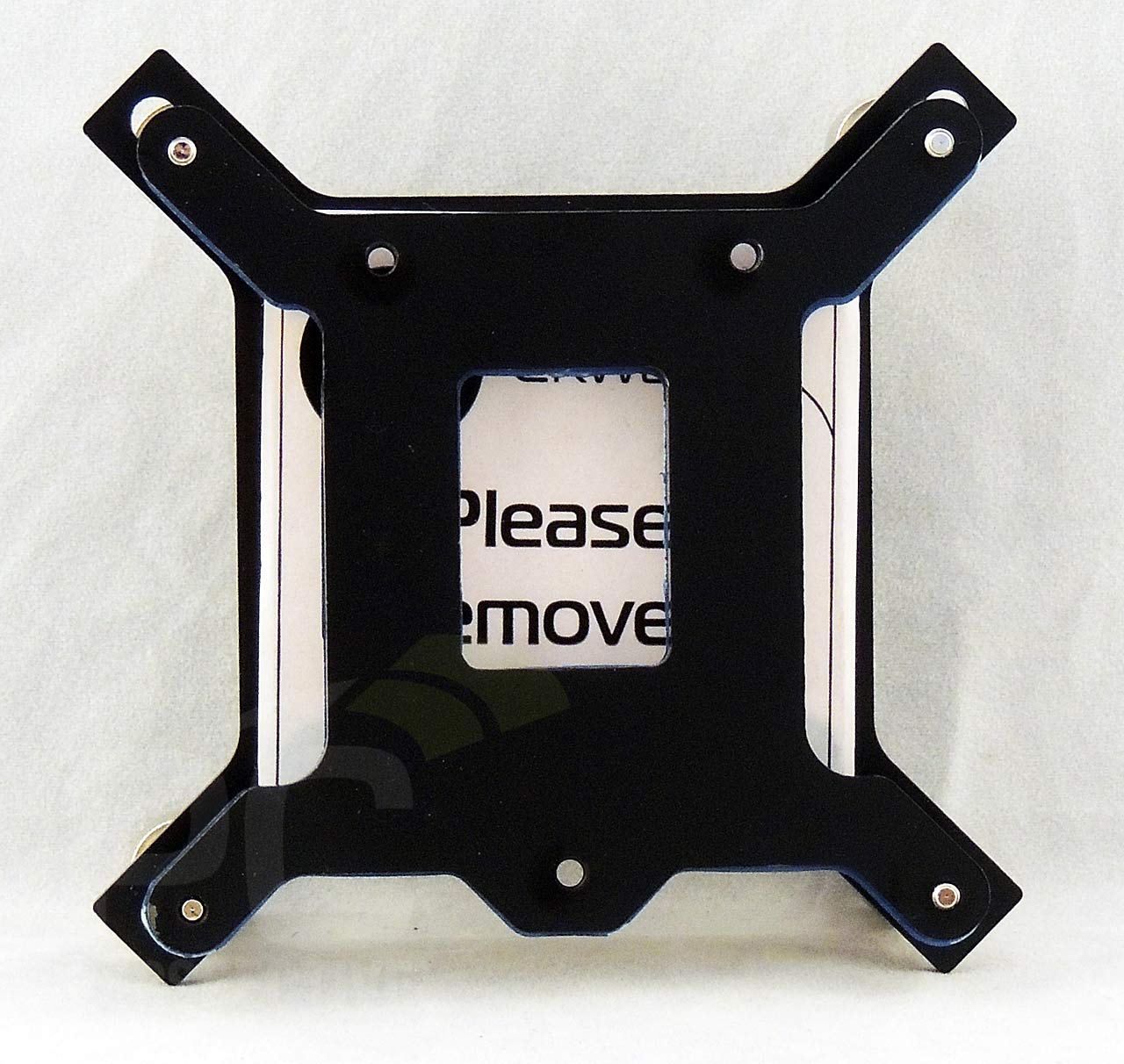 For mounting the CPU block on an Intel board, EK includes a factory installed mounting bracket kit and a backplate for LGA115X, LGA1366, and LGA2011 type sockets. The back plate is necessary for LGA115X boards only. As explained previously, the LGA115X back plate replaces the motherboard's stock back plate, requiring very careful removal of the stock plate from the board. Note that the factory-installed uprights have a thicker and thinner threaded portion with the thinner threads on the bottom of the shaft. The thinner threads are used to mount to the LGA115X back plate while the thicker threads mount directly to the LGA2011 socket surface plate. 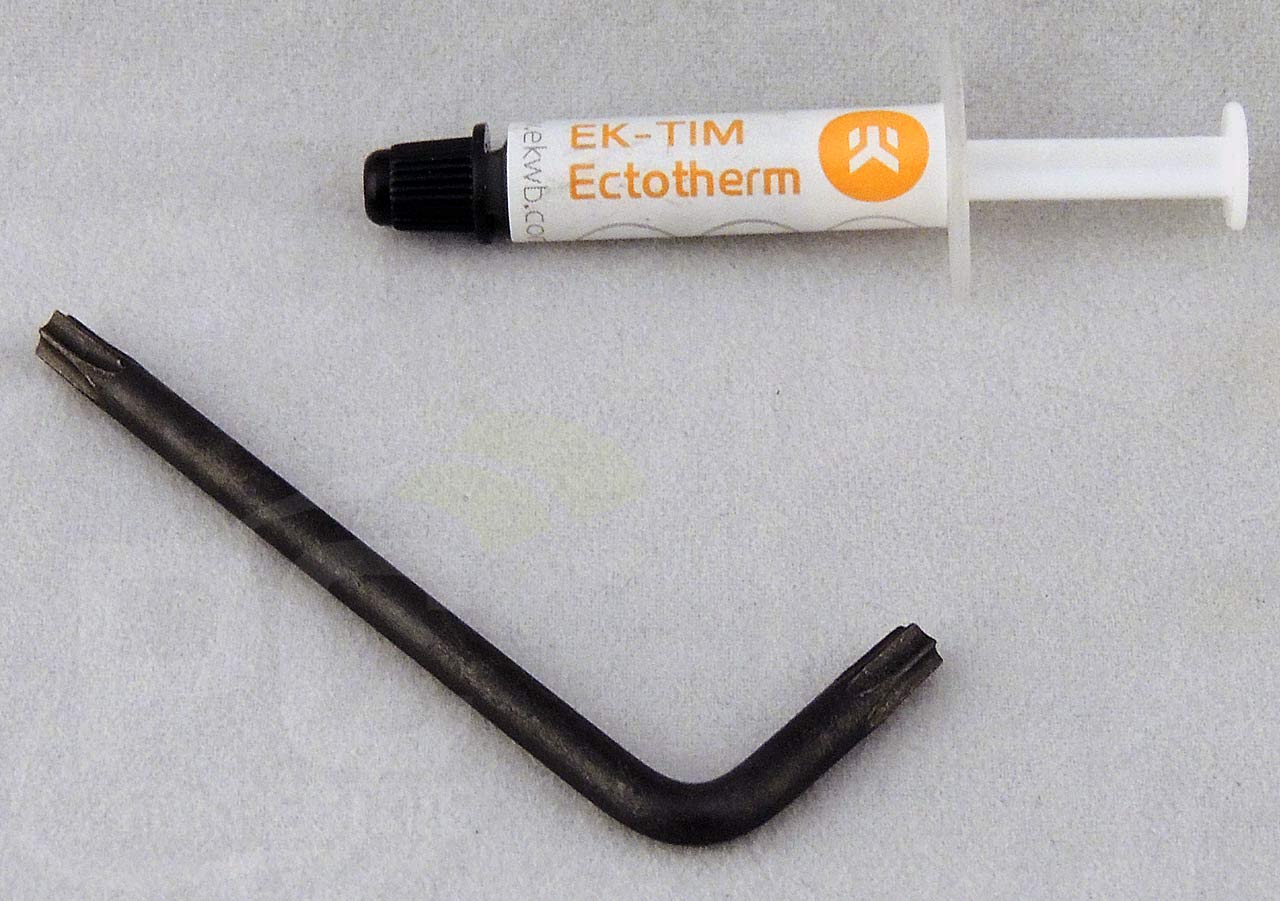 EK includes a dual-ended hex wrench for taking about the water block (if desired) as well as a tube of their branded Ectotherm thermal paste. The thermal paste provided should be enough for at least 2-3 block mounts. 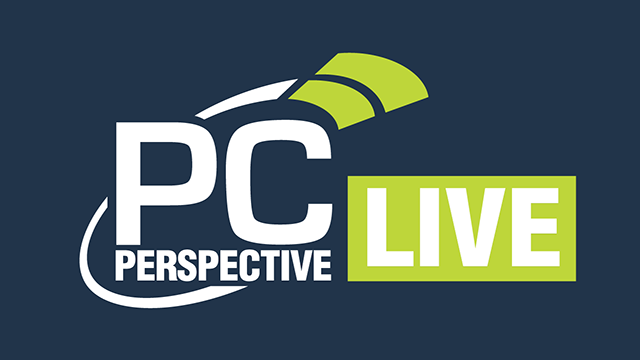 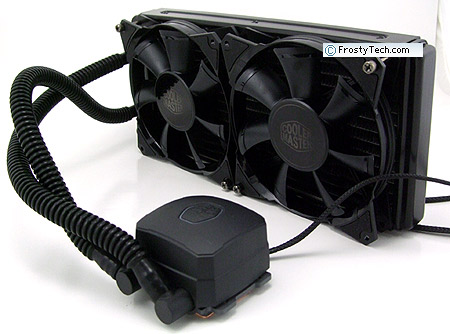