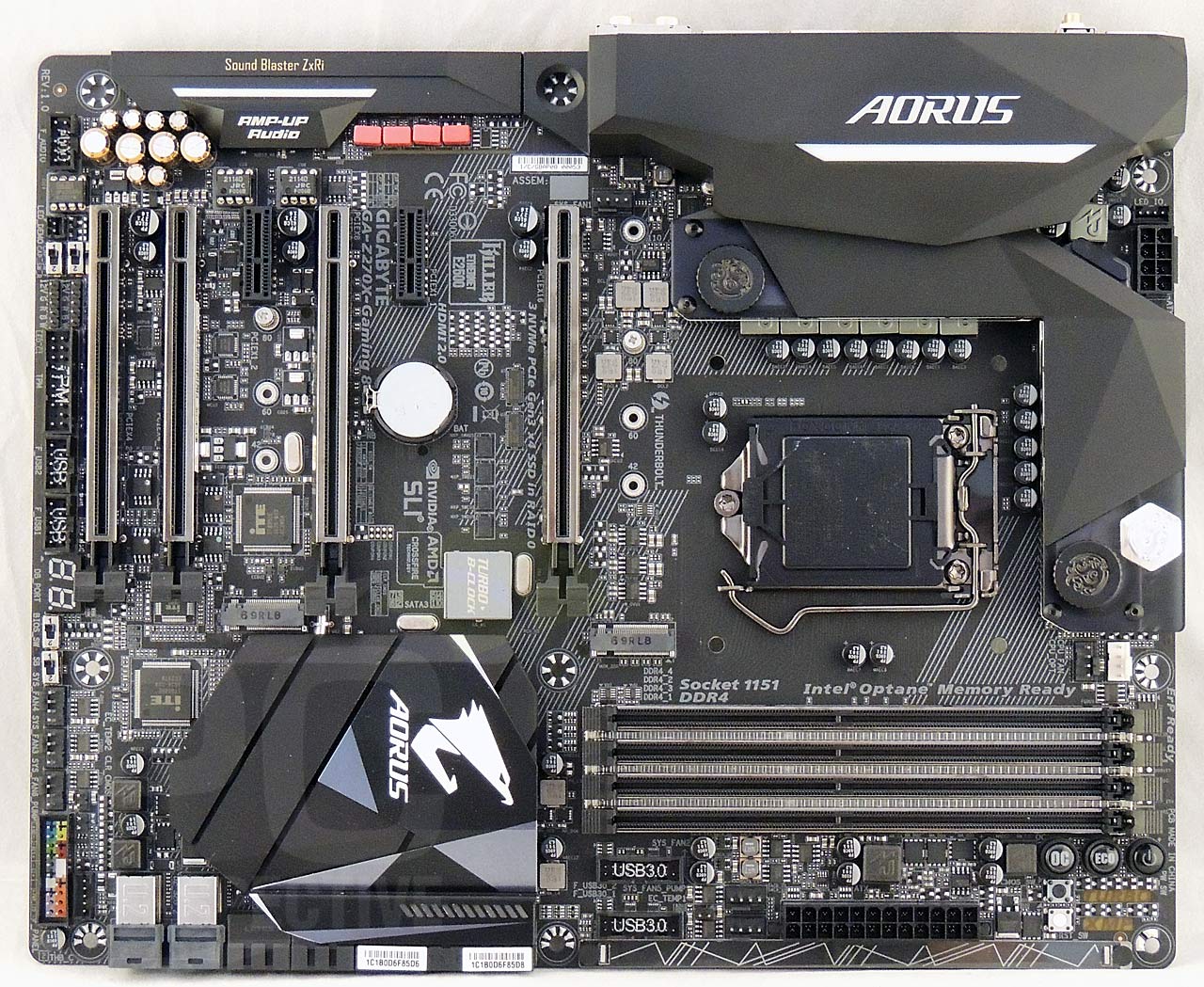 The Z270X-Gaming 8 motherboard features a black colored PCB with black colored heat sinks cooling various on board components and black plastic overlays sitting over the upper VRM heat sink, rear panel components, and audio components. The AORUS series logo displays on a chrome and white plate covering the upper part of the chipset heat sink with the board series logo on the rear panel cover. The board was designed with an ATX form factor for compatibility with most standard-sized enclosures, while providing more than enough surface area for its integrated components. 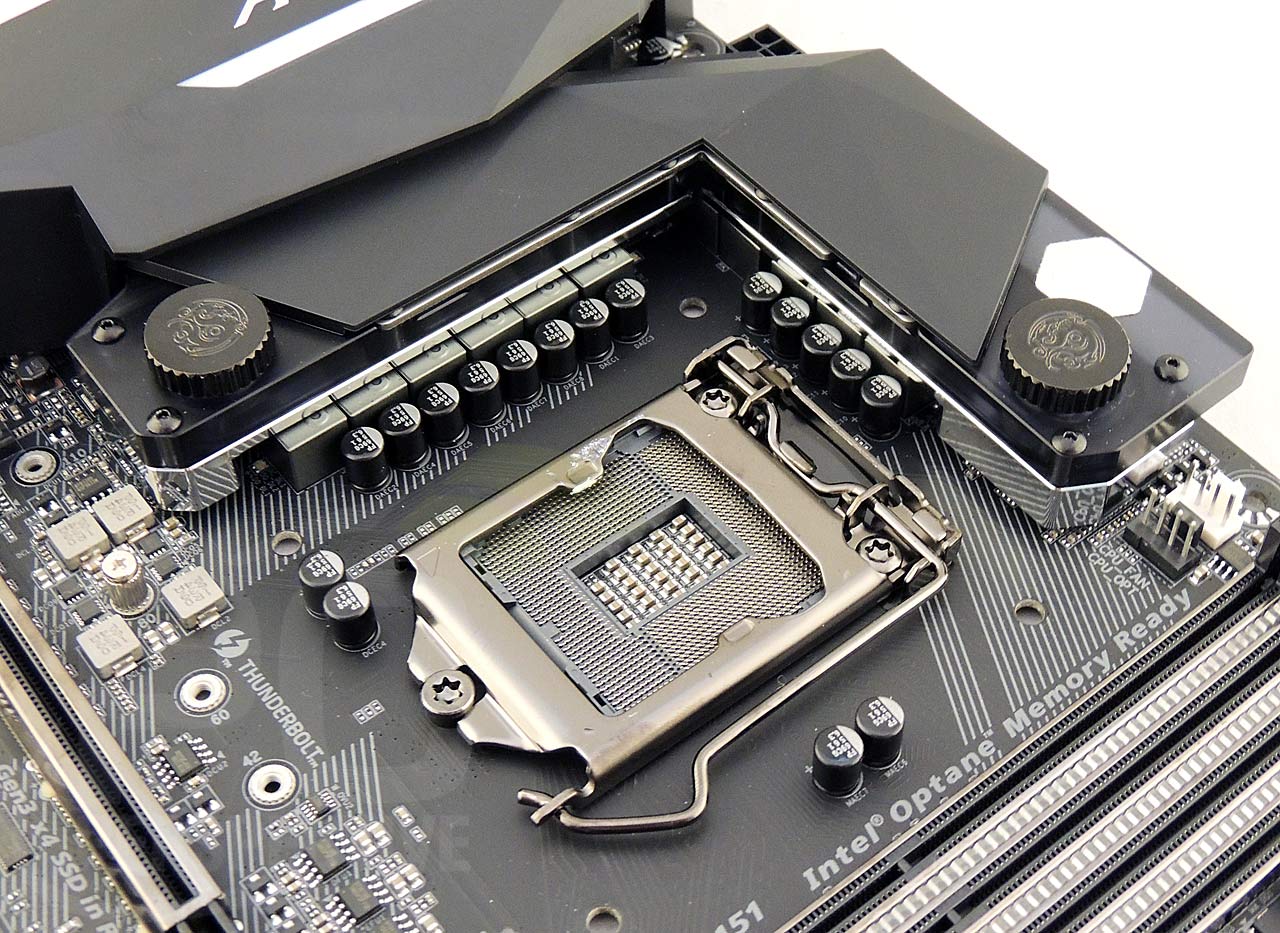 GIGABYTE designed the Z270X-Gaming 8 with a total of 11 digital power phases, more than enough to handle any load thrown at the system. The CPU VRMs are cooled by the Bitspower-designed hybrid G-Chill L-shaped cooler that sits above and to the right of the socket. The Bitspower corporate logo sits in the lower right corner of the VRM cooler as well as one both port covers. Bitspower designed the cooler with a copper bottom plate and an acrylic top plate forming the liquid channel and a black plastic overlay to mesh with the board's aesthetic. The hybrid cooler can be used in its default configuration as an air cooler or hooked into a DIY liquid cooling loop using the provided G1/4" inlet and outlet ports. 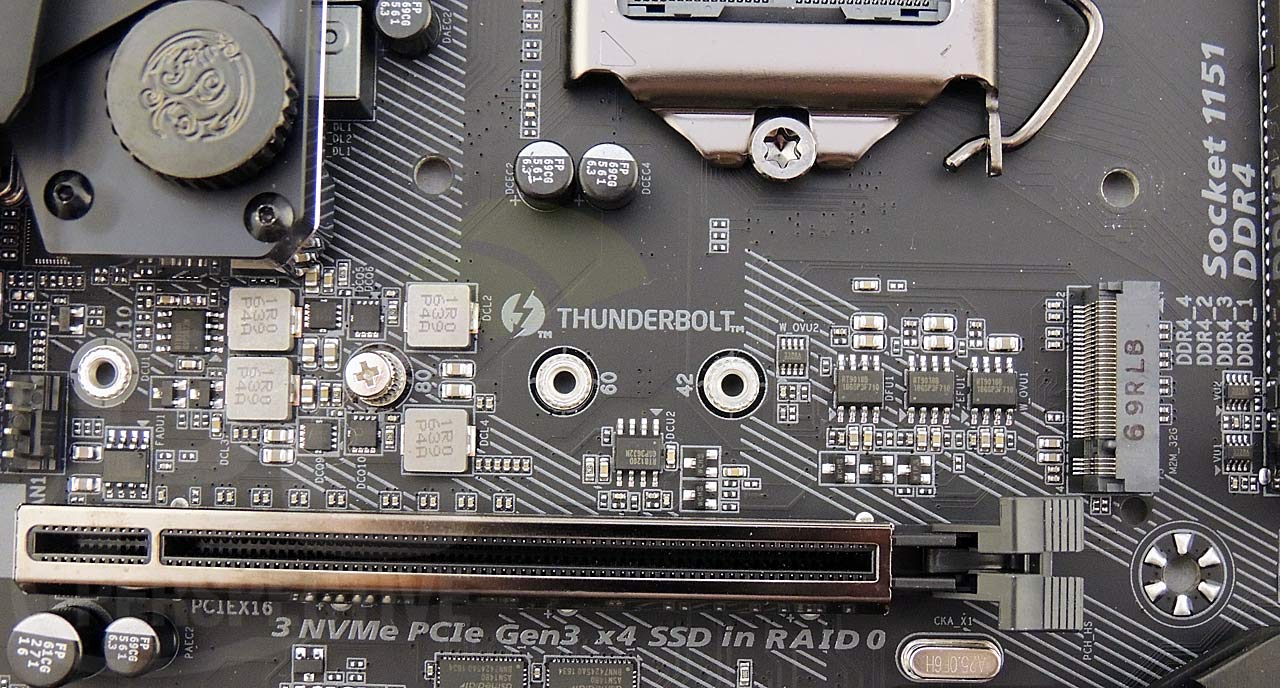 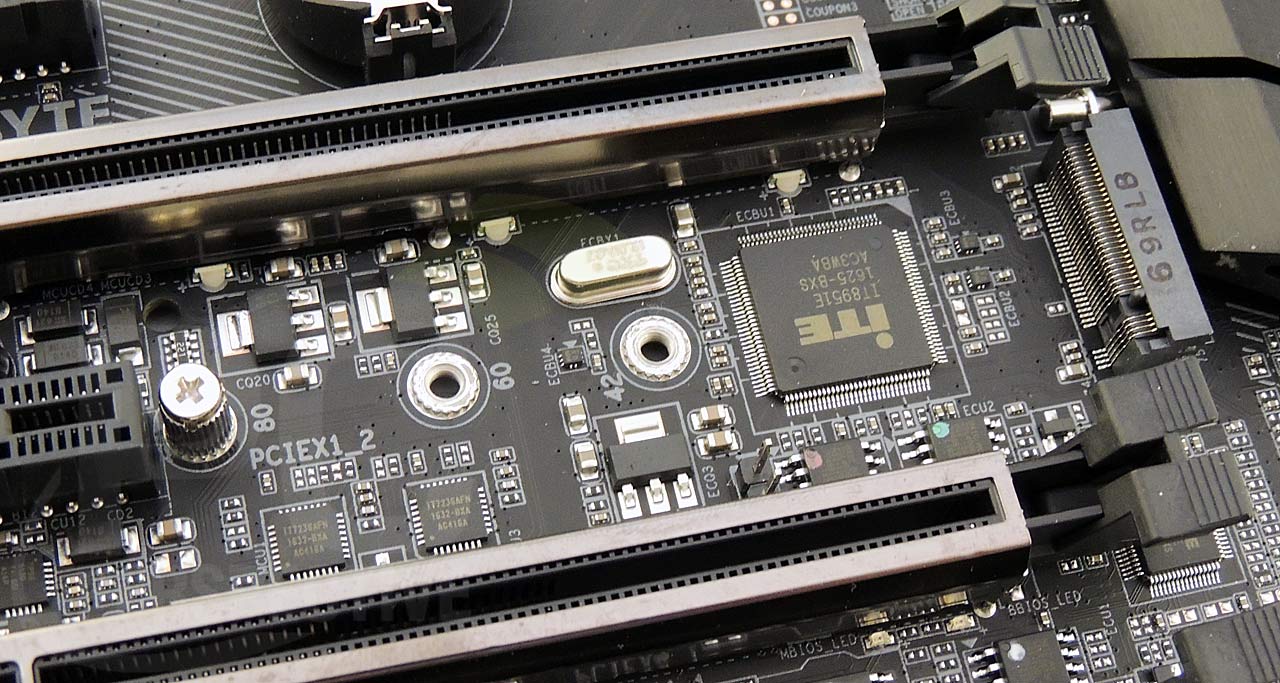 The board supports a total of two PCIe x4 M.2 slots, one to the sandwiched in between the CPU socket and the primary PCIe x16 slot, and the other underneath the secondary PCIe x1 slot. The M.2 slot by the CPU supports M.2 cards up to 110mm in length, while the other supports cards up to 80mm in length. Both M.2 ports a keyed with an M-key slot devices with standard SSD, PCIe x2, and PCIe x4 type M.2 drives supported. Note that the two M.2 slots can be used in a RAID array as long as the primary U.2 port is not used. The primary U.2 slot and the M.2 slot in the PCIe area share bandwidth and are mutually exclusive if one or the other are used in a RAID array. 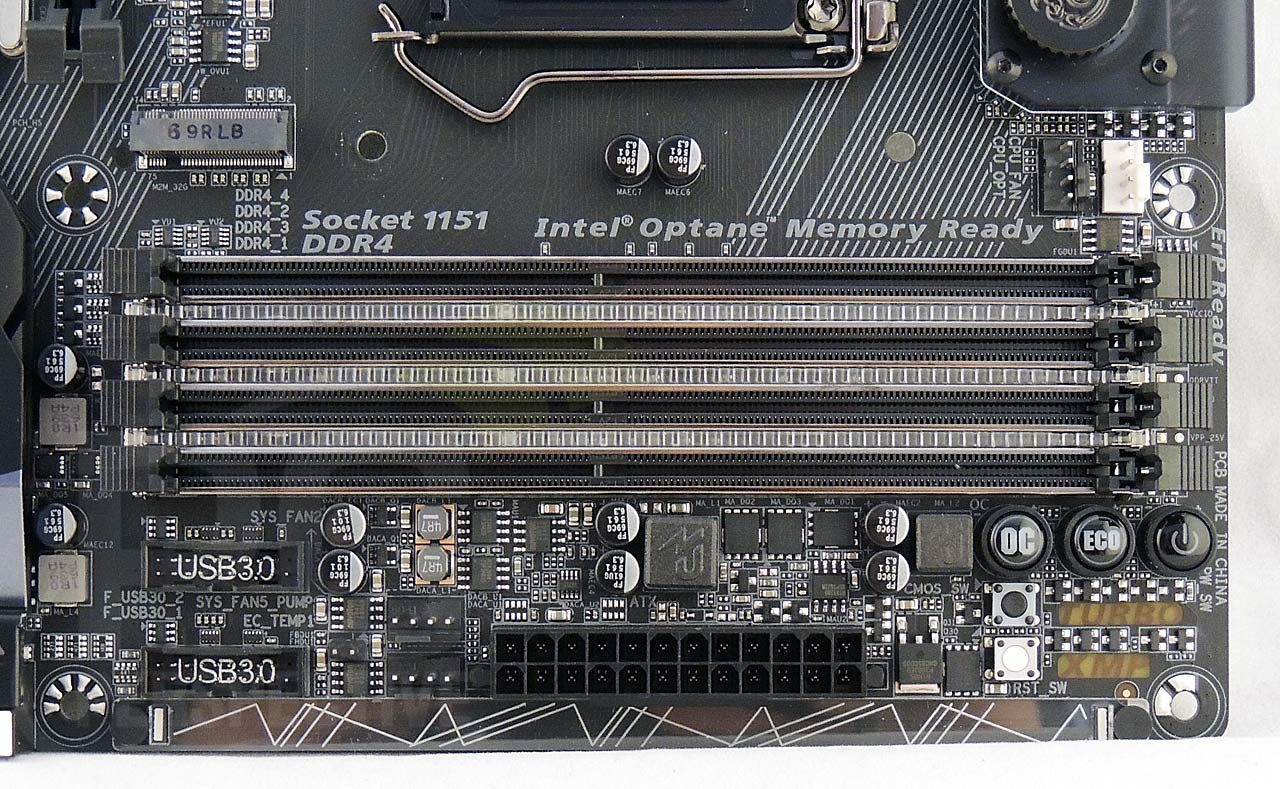 The board houses a total of four DIMM slots with Dual Channel memory mode active with modules in slots 1 / 3 or 2 / 4. In between the slots, GIGABYTE placed RGB LEDs that glow in line with the board settings configured through the BIOS or via the windows app. There are two USB 3.0 headers to the lower left of the DIMM slots with a illuminated panel along the lower edge of the board. Like the DIMM slot LEDs, the panel glows in tandem with the RGB board settings. Note that the panel is considered as part of the DIMM area if you choose to configure the board RGB LED sections individually. 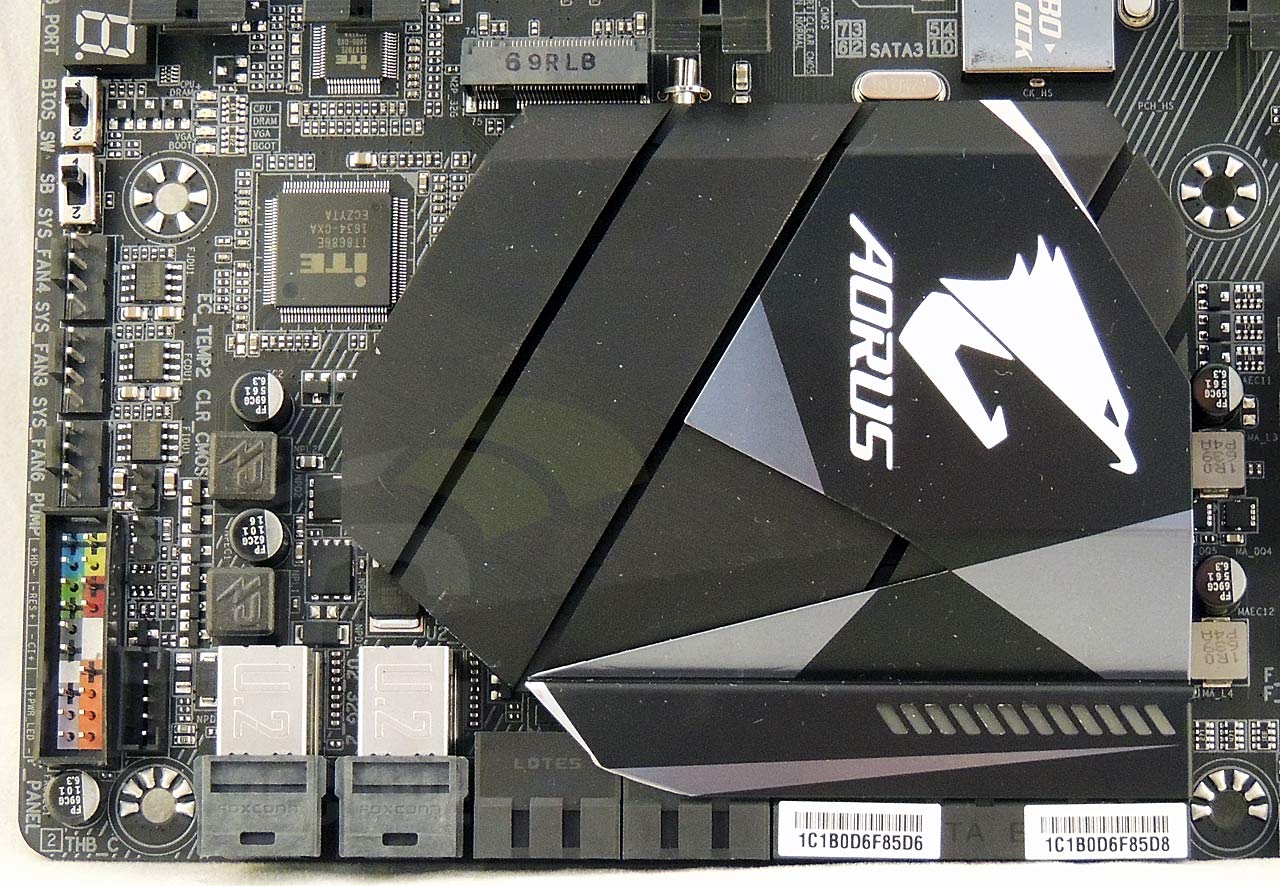 The Intel Z270 chipset is covered by a low profile black heat sink with a metal overlay stamped with the AORUS brand logo. In addition to the two PCIe x4 M.2 slots, the board was designed with dual PCIe x4 U.2 ports, four SATA III ports, and two 10Gbps SATA-Express ports. The SATA-Express ports can be broken into two SATA III ports, allowing for up to four additional SATA III ports. The primary U.2 slot (right side U.2 port) and the M.2 slot in the PCIe area share bandwidth and are mutually exclusive if one or the other are used in a RAID array. The primary U.2 port is automatically disabled with a PCIe x4 M.2 card in the shared M.2 port. Further, the primary M.2 slot (by the CPU socket area) and the upper SATA-Express port share bandwidth. The upper SATA-Express port (SATA ports 4 / 5) are automatically disabled with any M.2 device seated into the primary M.2 slot. 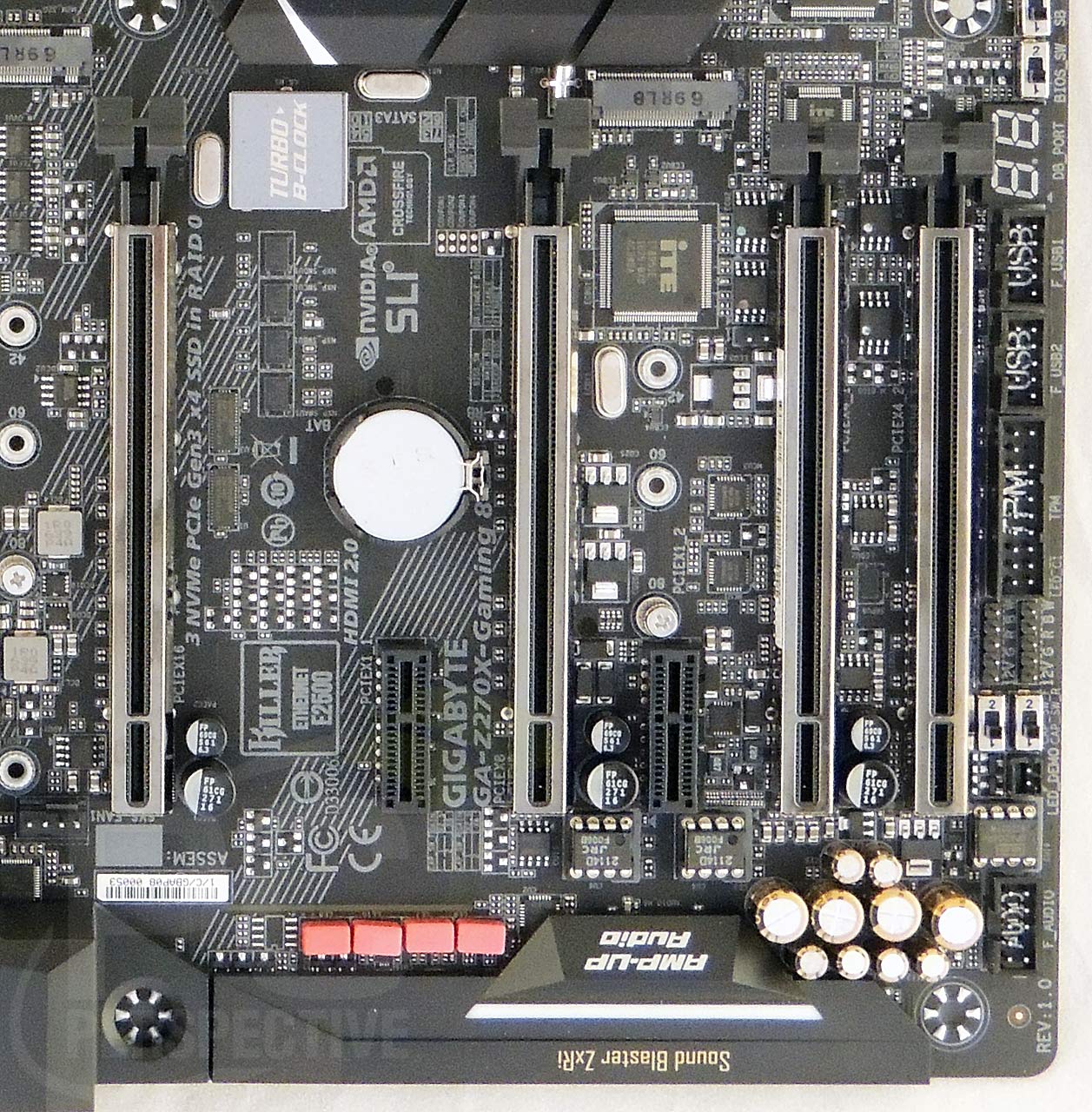 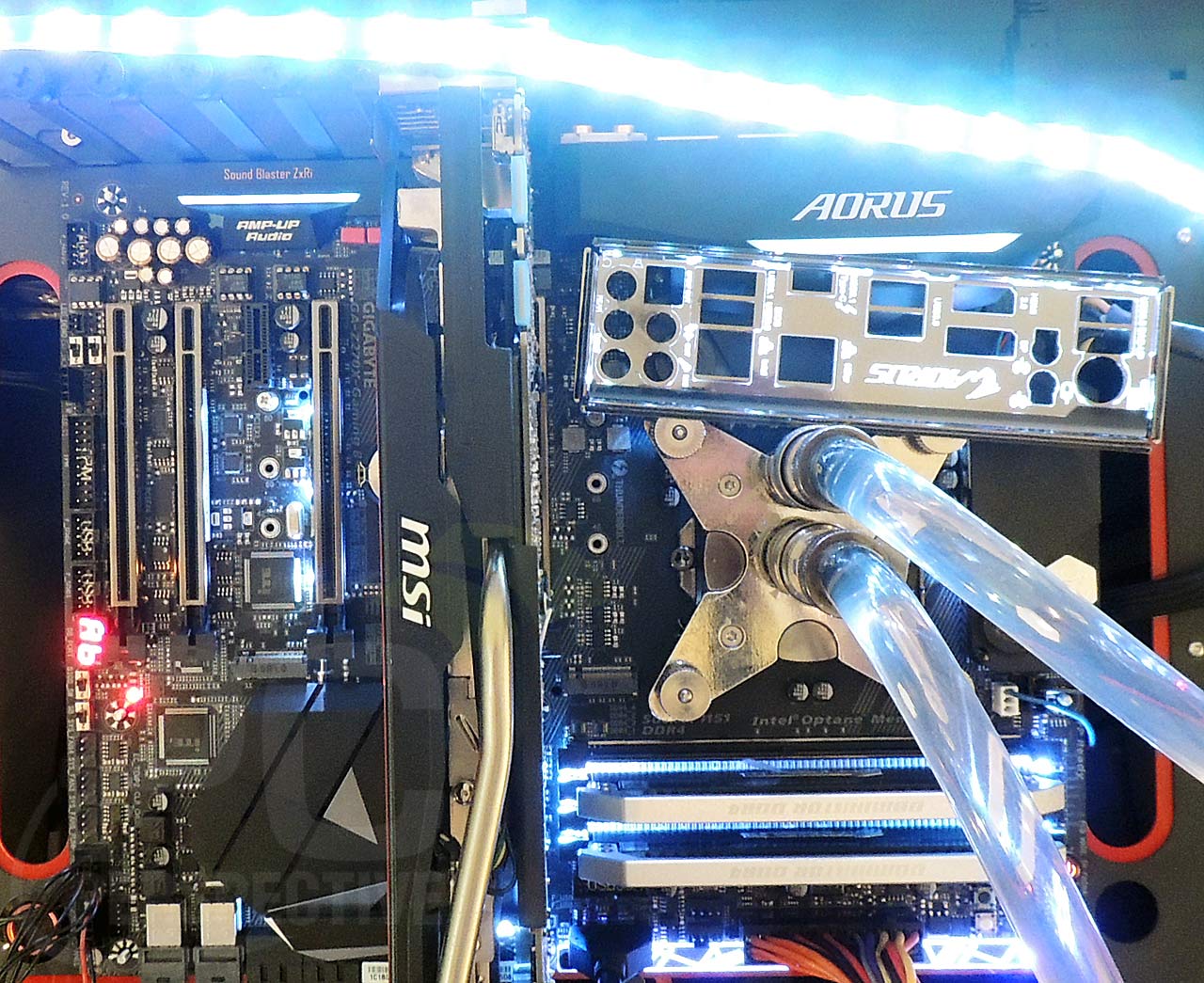