What is old is new again

AMD is back with some more Polaris.

Trust me on this one – AMD is aware that launching the RX 500-series of graphics cards, including the RX 580 we are reviewing today, is an uphill battle. Besides battling the sounds on the hills that whisper “reeebbrraannndd” AMD needs to work with its own board partners to offer up total solutions that compete well with NVIDIA’s stronghold on the majority of the market. Just putting out the Radeon RX 580 and RX 570 cards with same coolers and specs as the RX 400-series would be a recipe for ridicule. AMD is aware and is being surprisingly proactive in its story telling the consumer and the media.

The story that is being told is compelling; more than you might expect. With more than 500 million gamers using graphics cards two years or older, based on Steam survey data, there is a HUGE audience that would benefit from an RX 580 graphics card upgrade. Older cards may lack support for FreeSync, HDR, higher refresh rate HDMI output and hardware encode/decode support for 4K resolution content. And while the GeForce GTX 1060 family would also meet that criteria, AMD wants to make the case that the Radeon family is the way to go. 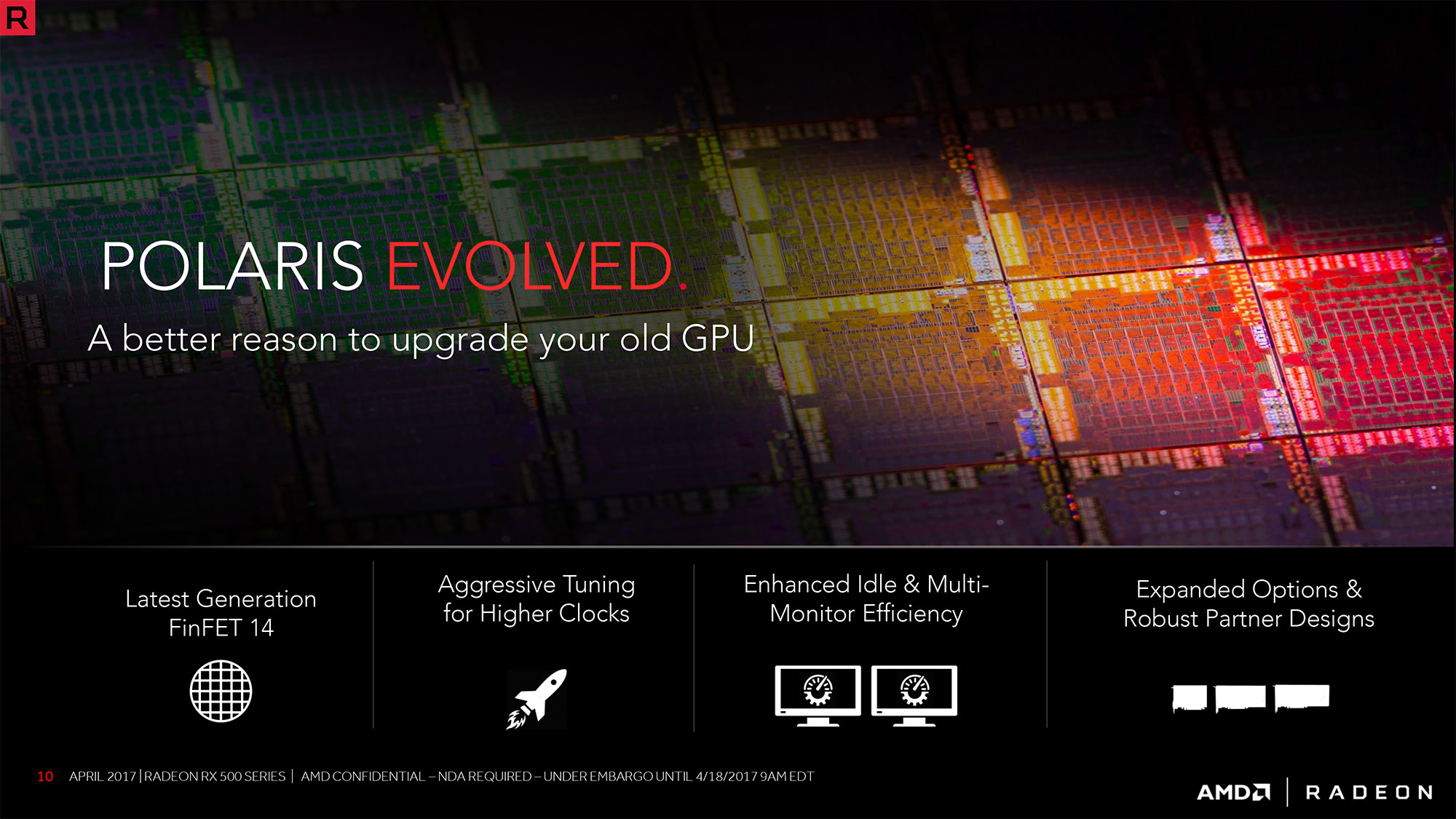 The Radeon RX 500-series is based on the same Polaris architecture as the RX 400-series, though AMD would tell us that the technology has been refined since initial launch. More time with the 14nm FinFET process technology has given the fab facility, and AMD, some opportunities to refine. This gives the new GPUs the ability to scale to higher clocks than they could before (though not without the cost of additional power draw). AMD has tweaked multi-monitor efficiency modes, allowing idle power consumption to drop a handful of watts thanks to a tweaked pixel clock.

Maybe the most substantial change with this RX 580 release is the unleashing of any kind of power consumption constraints for the board partners. The Radeon RX 480 launch was marred with issues surrounding the amount of power AMD claimed the boards would use compared to how much they DID use. This time around, all RX 580 graphics cards will ship with AT LEAST an 8-pin power connector, opening overclocked models to use as much as 225 watts. Some cards will have an 8+6-pin configuration to go even higher. Considering the RX 480 launched with a supposed 150 watt TDP (that it never lived up to), that’s quite an increase. 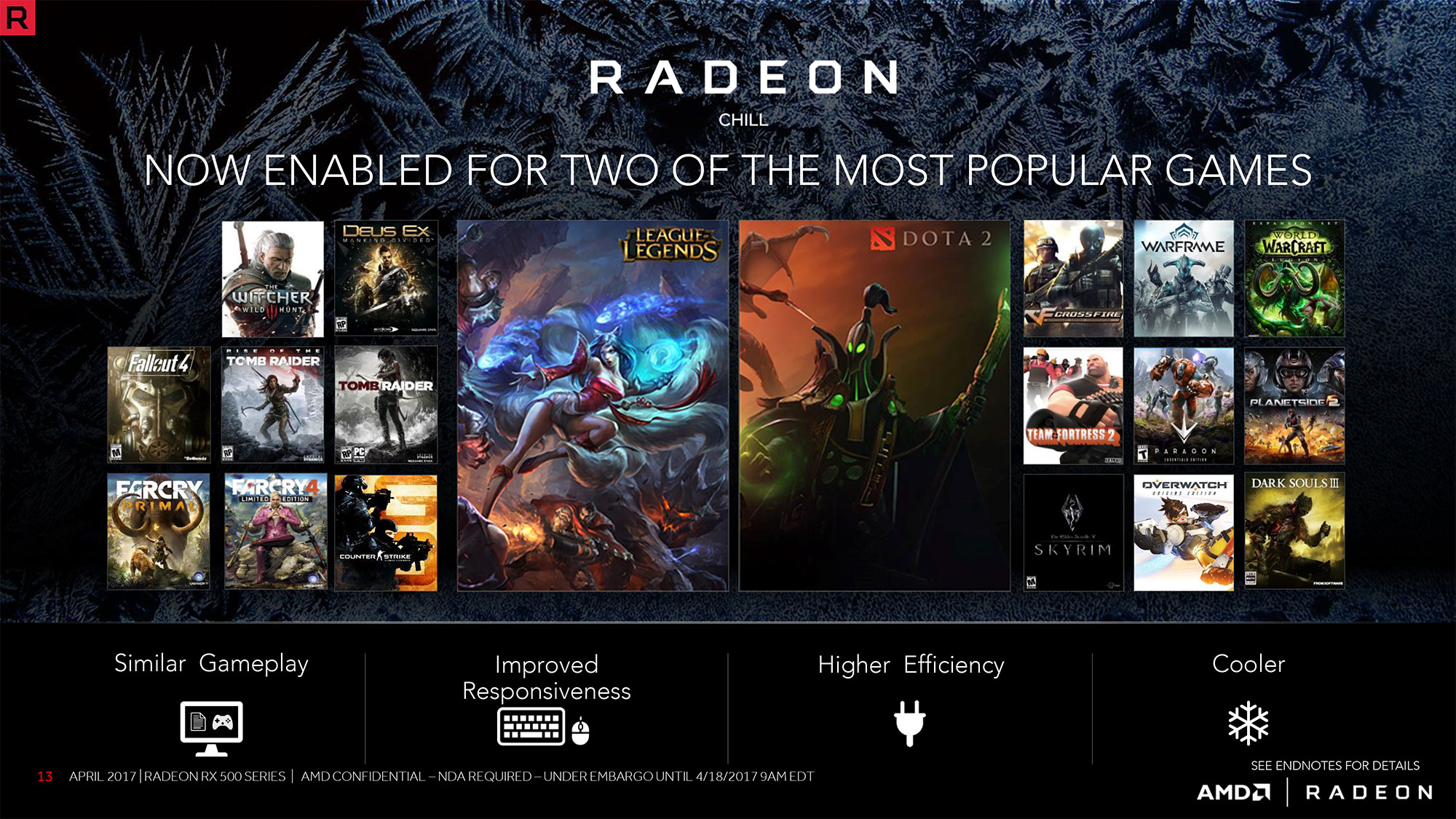 AMD is hoping to convince gamers that Radeon Chill is a good solution to help some specific instances of excessive power draw. Recent drivers have added support for games like League of Legends and DOTA 2, adding to The Witcher 3, Dues Ex: Mankind Divided and more. I will freely admit that while the technology behind Chill sounds impressive, I don’t have the experience with it yet to claim or counterclaim its supposed advantages…without sacrificing user experience. 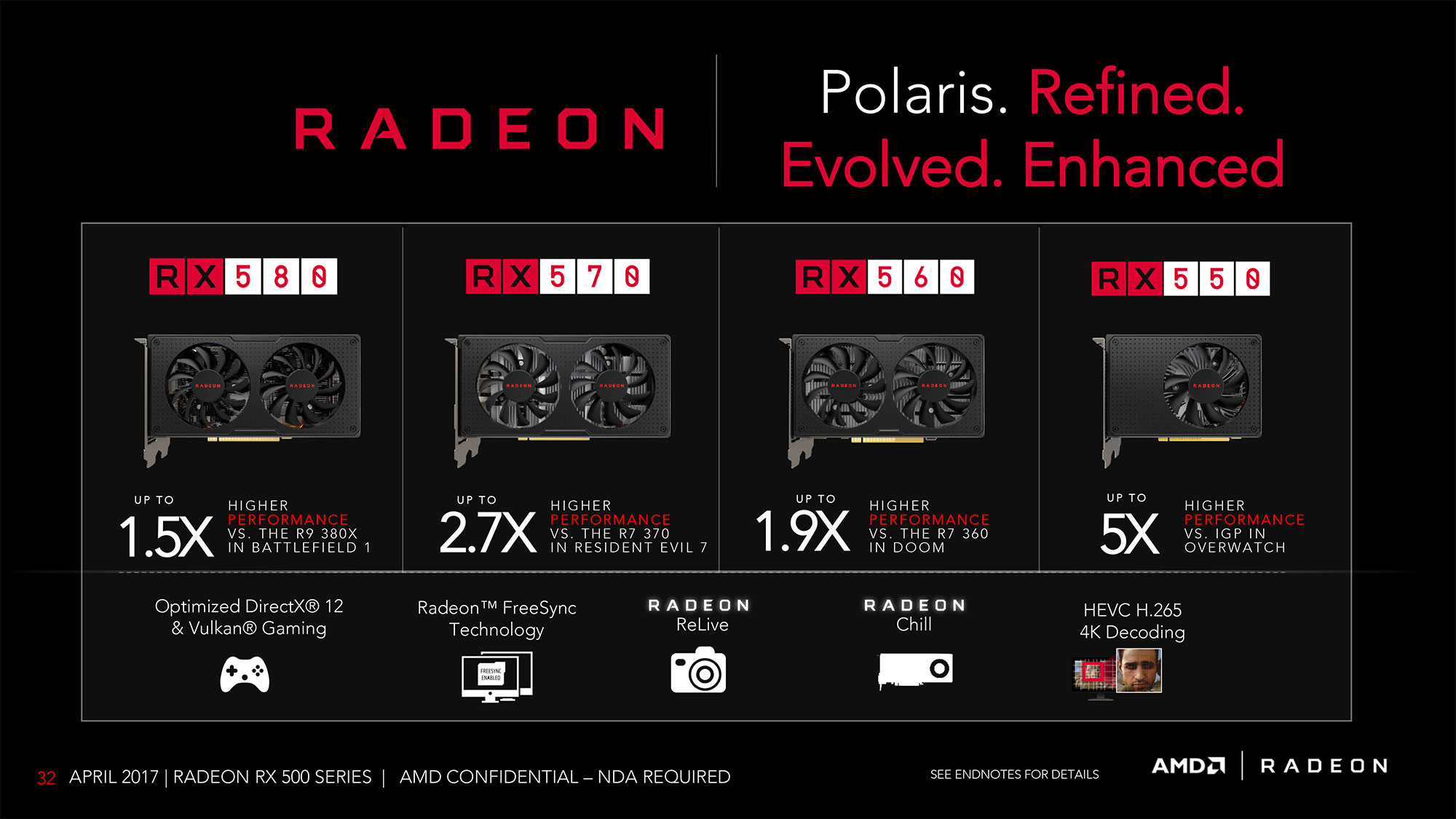 While we plan to have a review of the RX 570 on the site soon, we’ll gauge user interest in the RX 560 and RX 550 before getting any hardware in. The RX 550 looks particularly interesting as it is the only new GPU in the mix – a smaller chip designed specifically for IGP replacement.

Let’s talk about the Radeon RX 580 under the microscope today. It will be available in both 8GB and 4GB models, with the 4GB models starting at $199 and the 8GB models starting at $229. To be frank, based on the limited availability of the RX 480 4GB options, I would expect the same limited coverage of the 4GB on the RX 580. This is basically built to make sure AMD can claim they have a $199 graphics solution.

It’s also worth noting that though AMD does have partners building reference-esque RX 580 8GB cards at the $229 price point, I do not expect those to be the most common option. Instead, companies like ASUS and MSI are going to speed their allocation on their own custom coolers, added power draw and higher clocks. The MSI RX 580 Gaming X 8GB that AMD sent us for testing will have an MSRP of $245 – more in line with where I expect the RX 580 family to sit.

That will be an important distinction as we go to talk about the competing NVIDIA cards in the GTX 1060 family.

The RX 580 has the same number of compute units, stream processors and the same size memory bus as the Radeon RX 480. The only changes are the higher rated clock speeds and the higher starting TDP. On the clock speed subject, there is still a disconnect between how AMD and NVIDIA represent clock speeds to consumers. NVIDA is very upfront that the “base clock” its GPUs are speeds that the silicon should never drop below in normal gaming scenarios. The “boost clock” is a typical clock speed you should see in real-world gaming and in fact, in nearly all our tested scenarios, the NVIDIA partner cards and reference card exceed that.

On the contrary, AMD rates the GPUs at a single “boost clock” that represents a more-or-less maximum clock speed that you would see on the card in an ideal situation. They will freely admit that hitting or sustaining that clock speed is rare and would the user will find cards floating somewhere below that. With this particular release, AMD is also showing us a “base clock” but it does not represent a minimum clock speed that the GPU will guarantee to run at. Instead, the base clock here is more of a “bad case typical” – it’s all very confusing I admit. In general I think that NVIDIA has the right methodology here to avoid confusion and complaints from consumers on what clocks are expected and what are delivered. Under promise and over deliver is a great mindset here.

The other significant change is on power consumption. I already mentioned that while the RX 480 claimed a TDP of 150 watts, in practice the card did not operate at it. AMD stretched things beyond spec and reference cards would easily pull 180 watts without overclocking all while only requiring a single 6-pin power connection on the card. For the Radeon RX 580 launch AMD is alleviating us of that concern by simply opening the floodgates. The reference TDP of the RX 580 is 185 watts though you will see board partners going well beyond that. Our tested MSI card today pulls just over 200 watts. Thanks to the move to an 8-pin power connector we no longer have any system safety/stability concerns to deal with, but it does mean that any semblance of performance/watt comparisons to NVIDIA’s GTX 1060 should go out the window.

For our review today we are looking at a set of three overclocked cards: one RX 580, one RX 480 and one GeForce GTX 1060 from EVGA. I will be the first to tell you that 99 times out of 100 I would prefer to test reference models of cards first but for this launch, none were made available. That means that in order to be as fair as possible, all the cards in our set needed to be overclocked and in about the same amount relative to their base models. 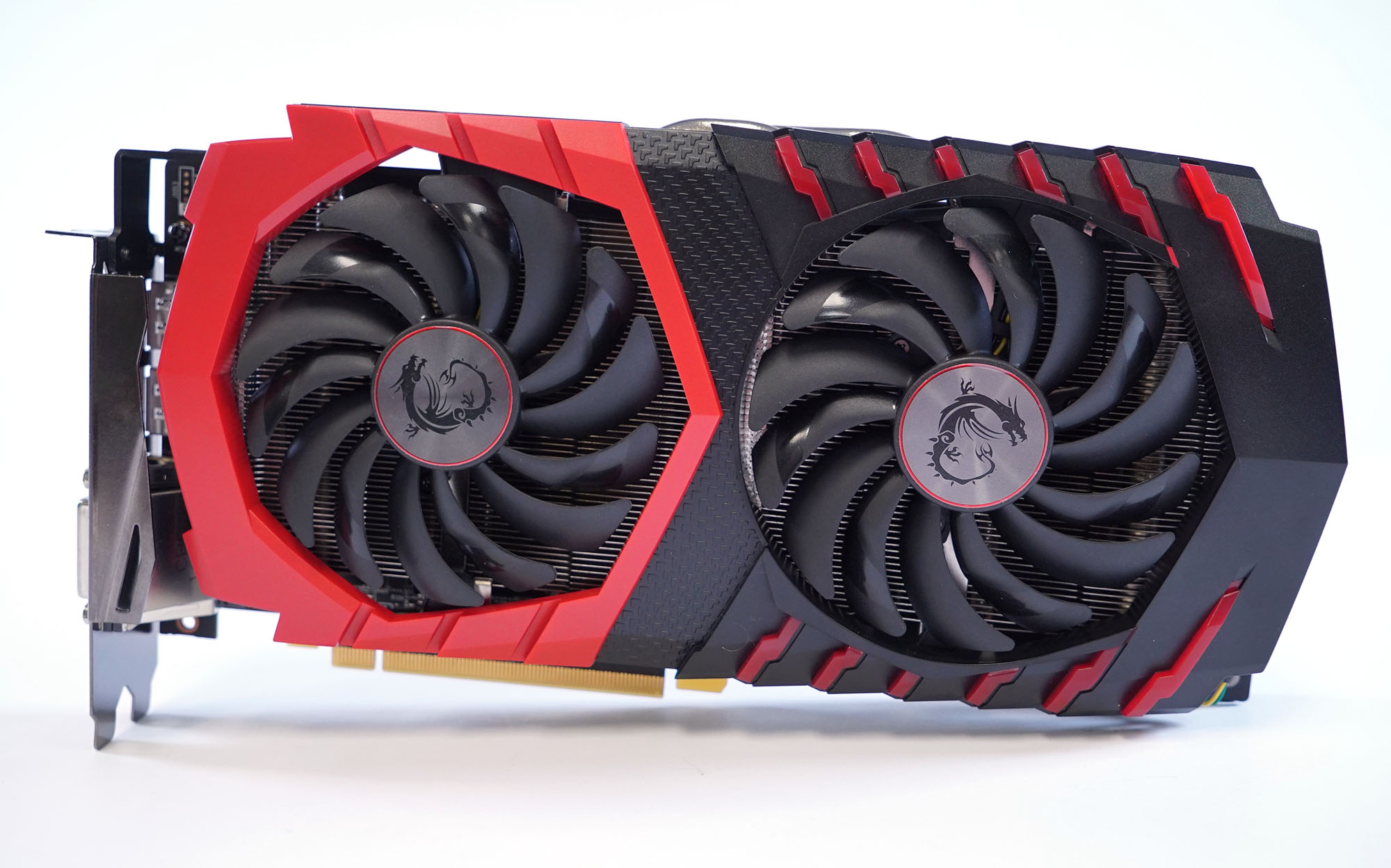 First on the block is the MSI Radeon RX 580 8GB Gaming X model with a $245 MSRP. This card has a rated clock speed of 1393 MHz, an increase over the 1340 MHz rated by AMD for the RX 580. Memory is also slightly overclocked at 8100 MHz, compared to 8000 MHz reference. This card uses MSI’s custom cooler design with a pair of fans that can run in a silent mode when running at Windows idle state. 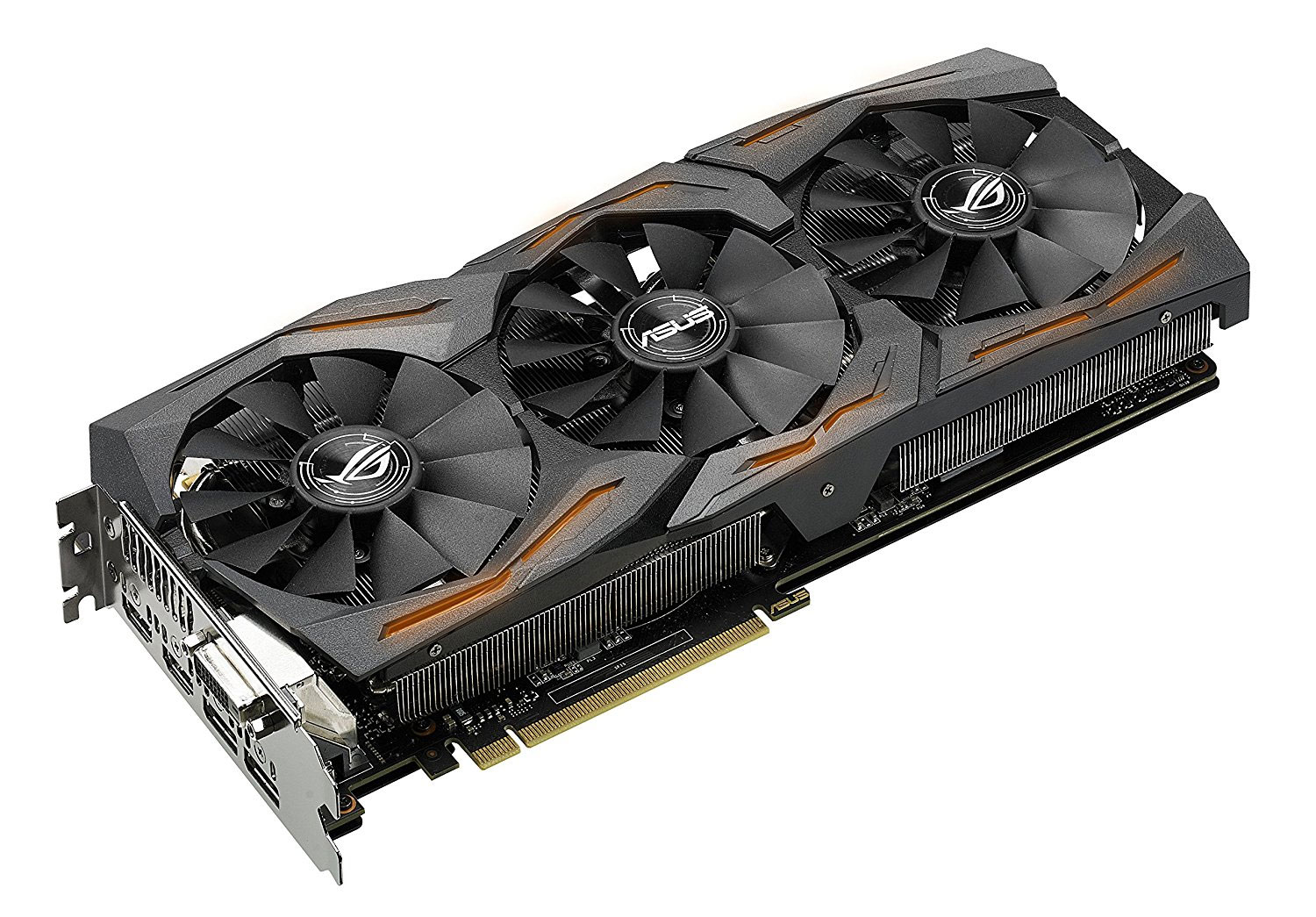 Next up is the ASUS RX 480 Strix 8GB card currently selling for $239 on Amazon.com. This card also uses a custom cooler and has an overclocked out of the box speed of 1330 MHz, an increase over the 1266 MHz rated clock. 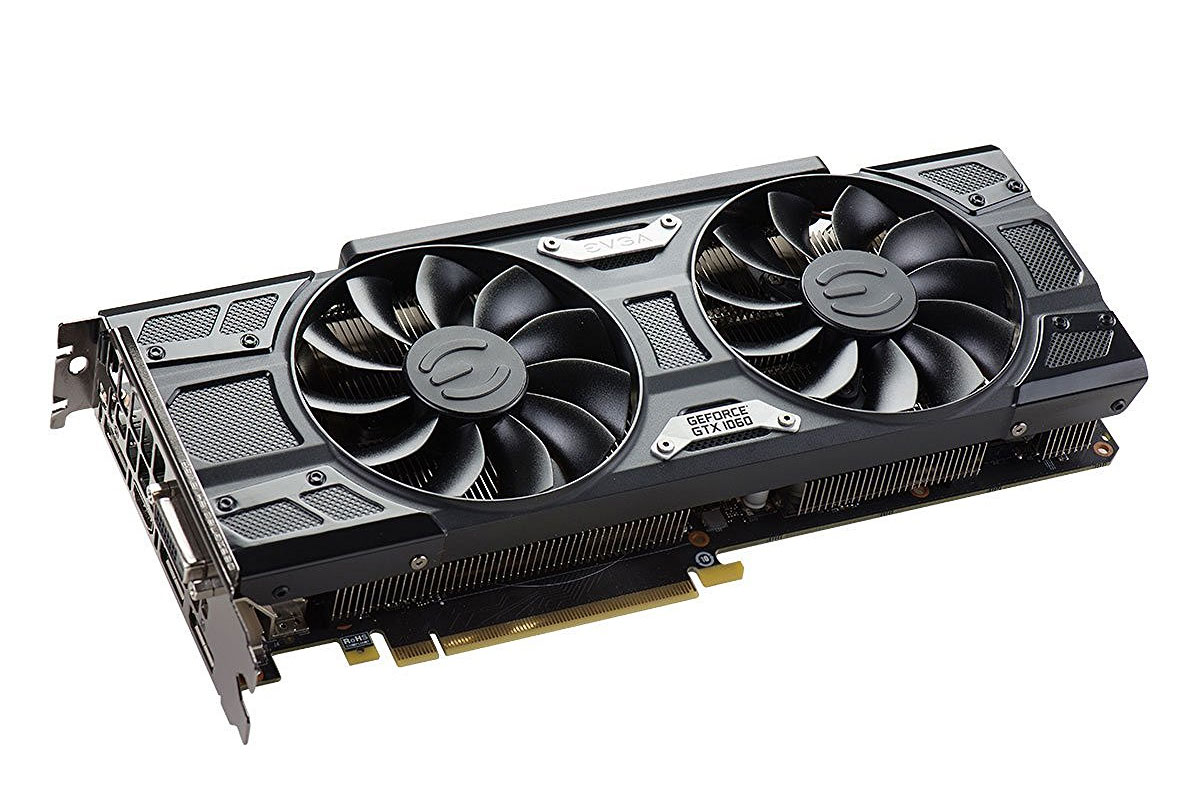 Finally we have the EVGA GeForce GTX 1060 6GB SC model currently selling for $249 on Amazon.com. This card is also overclocked, with a base clock of 1607 MHz and a boost clock of 1835 MHz, an increase over the reference speeds of 1506 MHz and 1608 MHz. The EVGA card is a bit higher overclock compared to the AMD cards, but it does represent the lowest overclocked option from EVGA on the 1060 6GB card family, with a couple of options going well above. And with the pricing at its current state, these comparisons are spot-on.