It Started with an OpenCL 2.2 Press Release

Update (May 18 @ 4pm EDT): A few comments across the internet believes that the statements from The Khronos Group were inaccurately worded, so I emailed them yet again. The OpenCL working group has released yet another statement:

OpenCL is announcing that their strategic direction is to support CL style computing on an extended version of the Vulkan API. The Vulkan group is agreeing to advise on the extensions.

In other words, this article was and is accurate. The Khronos Group are converging OpenCL and Vulkan into a single API: Vulkan. There was no misinterpretation.

Earlier today, we published a news post about the finalized specifications for OpenCL 2.2 and SPIR-V 1.2. This was announced through a press release that also contained an odd little statement at the end of the third paragraph.

We are also working to converge with, and leverage, the Khronos Vulkan API — merging advanced graphics and compute into a single API.

This statement seems to suggest that OpenCL and Vulkan are expecting to merge into a single API for compute and graphics at some point in the future. This seemed like a huge announcement to bury that deep into the press blast, so I emailed The Khronos Group for confirmation (and any further statements). As it turns out, this interpretation is correct, and they provided a more explicit statement:

The OpenCL working group has taken the decision to converge its roadmap with Vulkan, and use Vulkan as the basis for the next generation of explicit compute APIs – this also provides the opportunity for the OpenCL roadmap to merge graphics and compute.

This statement adds a new claim: The Khronos Group plans to merge OpenCL into Vulkan, specifically, at some point in the future. Making the move in this direction, from OpenCL to Vulkan, makes sense for a handful of reasons, which I will highlight in my analysis, below.

The first reason for merging OpenCL into Vulkan, from my perspective, is that Apple, who originally created OpenCL, still owns the trademarks (and some other rights) to it. The Khronos Group licenses these bits of IP from Apple. Vulkan, based on AMD’s donation of the Mantle API, should be easier to manage from the legal side of things. 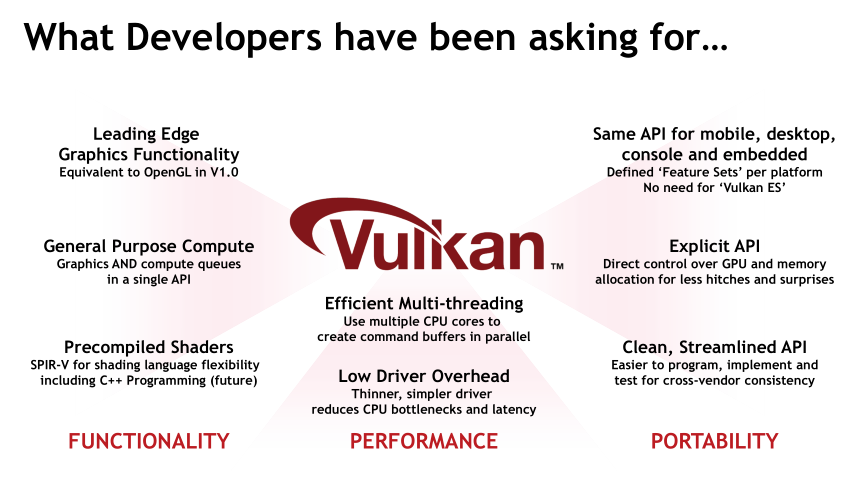 The second reason for going in that direction is the actual structure of the APIs. When Mantle was announced, it looked a lot like an API that wrapped OpenCL with a graphics-specific layer. Also, Vulkan isn’t specifically limited to GPUs in its implementation.

Aside: When you create a device queue, you can query the driver to see what type of device it identifies as by reading its VkPhysicalDeviceType. Currently, as of Vulkan 1.0.49, the options are Other, Integrated GPU, Discrete GPU, Virtual GPU, and CPU. While this is just a clue, to make it easier to select a device for a given task, and isn’t useful to determine what the device is capable of, it should illustrate that other devices, like FPGAs, could support some subset of the API. It’s just up to the developer to check for features before they’re used, and target it at the devices they expect.

If you were to go in the other direction, you would need to wedge graphics tasks into OpenCL. You would be creating Vulkan all over again. From my perspective, pushing OpenCL into Vulkan seems like the path of least resistance.

The third reason (that I can think of) is probably marketing. DirectX 12 isn’t attempting to seduce FPGA developers. Telling a game studio to program their engine on a new, souped-up OpenCL might make them break out in a cold sweat, even if both parties know that it’s an evolution of Vulkan with cross-pollination from OpenCL. OpenCL developers, on the other hand, are probably using the API because they need it, and are less likely to be shaken off.

What OpenCL Could Give Vulkan (and Vice Versa)

From the very onset, OpenCL and Vulkan were occupying similar spaces, but there are some things that OpenCL does “better”. The most obvious, and previously mentioned, element is that OpenCL supports a wide range of compute devices, such as FPGAs. That’s not the limit of what Vulkan can borrow, though, although it could make for an interesting landscape if FPGAs become commonplace in the coming years and decades.

Personally, I wonder how SYCL could affect game engine development. This standard attempts to guide GPU- (and other device-) accelerated code into a single-source, C++ model. For over a decade, Tim Sweeney of Epic Games has talked about writing engines like he did back in the software-rendering era, but without giving up the ridiculous performance (and efficiency) provided by GPUs.

Long-time readers of PC Perspective might remember that I was investigating GPU-accelerated software rendering in WebCL (via Nokia’s implementation). The thought was that I could concede the raster performance of modern GPUs and make up for it with added control, the ability to explicitly target secondary compute devices, and the ability to run in a web browser. This took place in 2013, before AMD announced Mantle and browser vendors expressed a clear disinterest in exposing OpenCL through JavaScript. Seeing the idea was about to be crushed, I pulled out the GPU-accelerated audio ideas into a more-focused project, but that part of my history is irrelevant to this post.

The reason for bringing up this anecdote is because, if OpenCL is moving into Vulkan, and SYCL is still being developed, then it seems likely that SYCL will eventually port into Vulkan. If this is the case, then future game engines can gain benefits that I was striving toward without giving up access to fixed-function features, like hardware rasterization. If Vulkan comes to web browsers some day, it would literally prune off every advantage I was hoping to capture, and it would do so with a better implementation.

More importantly, SYCL is something that Microsoft cannot provide with today’s DirectX.

Admittedly, it’s hard to think of something that OpenCL can acquire from Vulkan, besides just a lot more interest from potential developers. Vulkan was already somewhat of a subset of OpenCL that had graphics tasks (cleanly) integrated over top of it. On the other hand, OpenCL has been struggling to acquire mainstream support, so that could, in fact, be Vulkan’s greatest gift.

The Khronos Group has not provided a timeline for this change. It’s just a roadmap declaration. 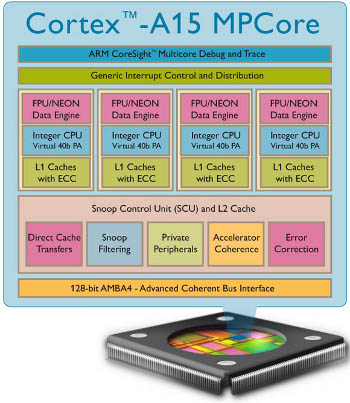