Today Qualcomm took the covers off of an update to the Snapdragon 600 family of processors, now known as mobile platforms. The Snapdragon 660 and 630 Mobile Platforms are important products in the company’s portfolio as they address a larger segment of the consumer market than the premium-tier Snapdragon 800 while still offering performance and feature sets above the budget segments of the 400s. The Snapdragon 820 and 835 traditionally get all of the attention from media, the 600-series is at the heart of popular devices like the Sony Xperia X, Asus Zenfone 3 Ultra, HTC 10 Lifestyle and over 1000 more designs.

The biggest changes to both new platforms come in the form of LTE connectivity and GPU performance. In a bid to bring previously unseen capabilities to the 600-series of solutions, Qualcomm has taken the Snapdragon X12 LTE modem that shipped with the Snapdragon 820/821 SoC and integrated it on both the 660 and 630. This creates mainstream mobile platforms that can run Cat 12/13 modems and speeds as high as 600 Mbps downstream (3x carrier aggregation) and 150 Mbps upstream (2x carrier aggregation). 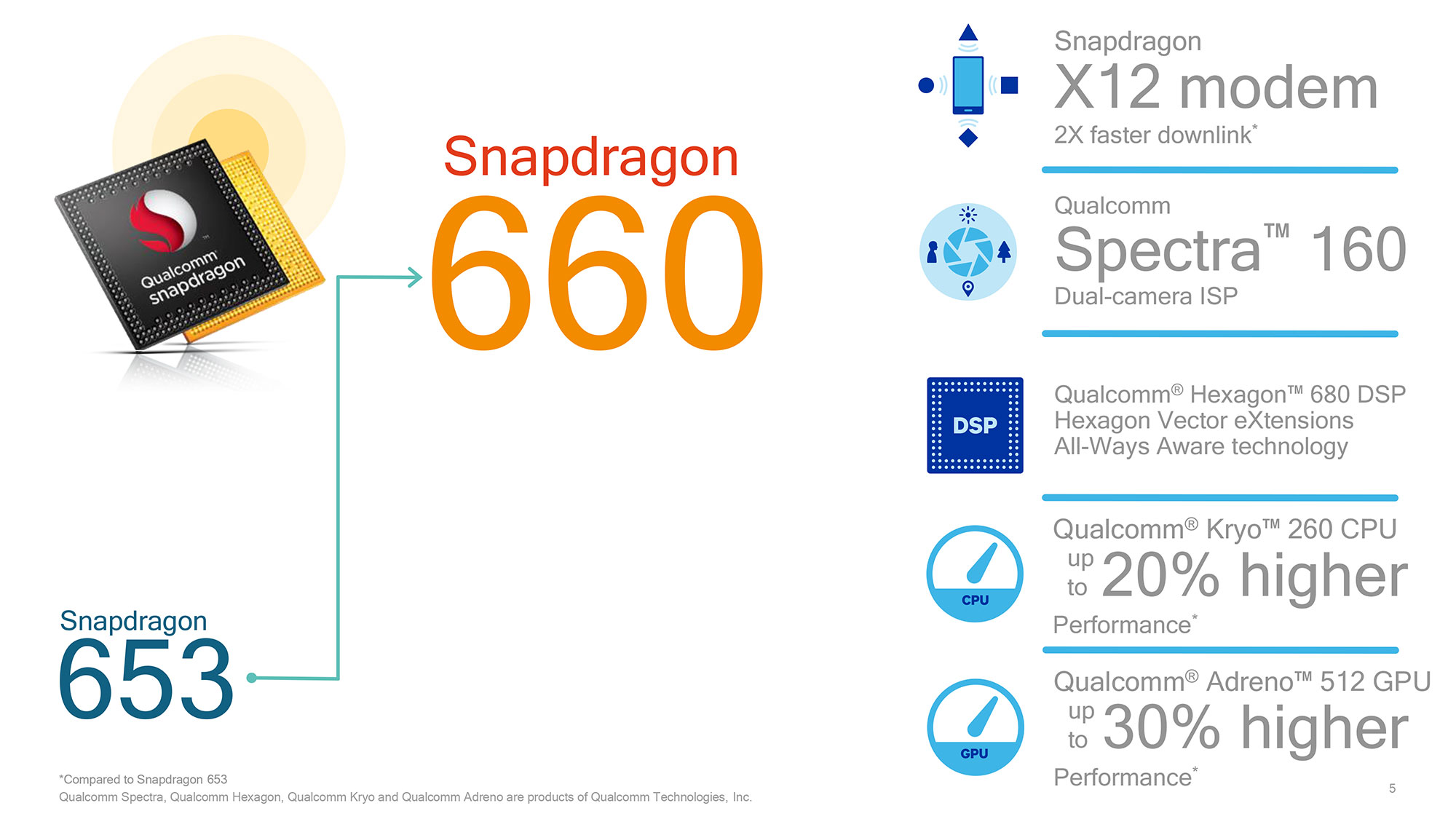 That is a significant move and should result in a massive amount of high speed devices saturating the market (and carriers’ networks) starting later this year. Along with that higher performance comes the same X12 feature set that we saw with Snapdragon 820/821 including adaptive antenna tuning capability (TruSignal) and dynamic signal quality adjustments for power efficiency optimizations. 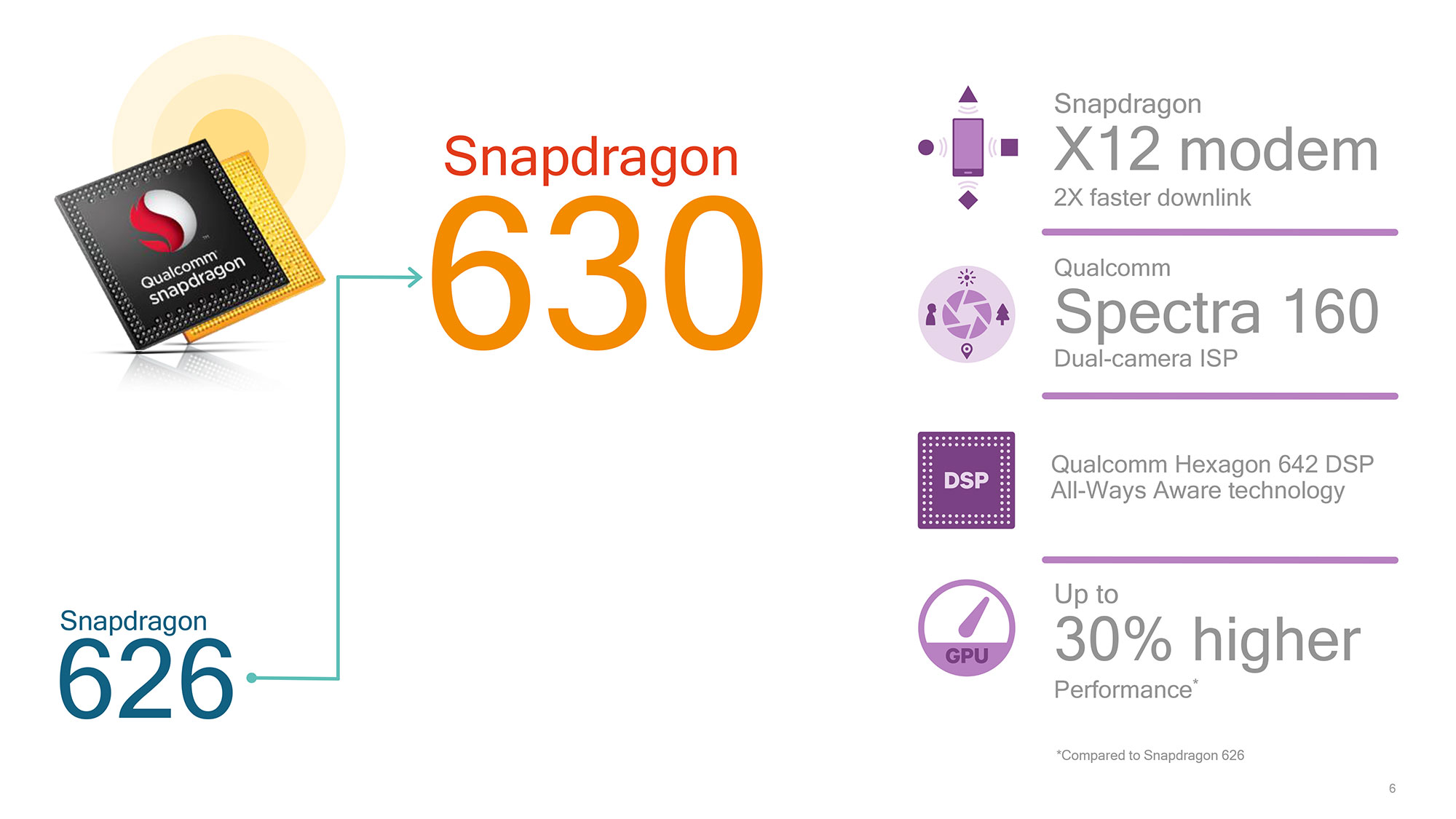 The GPU performance of both the Snapdragon 660 and 630 get a boost over the previous competitors (653 and 626 respectively) though they do so with different Adreno implementations. The SD 660 uses the Adreno 512 GPU that offers up to 30% better performance compared to the Adreno 510 used on the SD 650 series. While we don’t have details yet on where that advantage comes from (clocks or core improvements), I have a feeling that much of it comes from improved frequencies. The Snapdragon 630 uses the Adreno 508 GPU, compared to the 506 from the SD 626 processor, and also claims to have a 30% performance advantage over the previous generation. 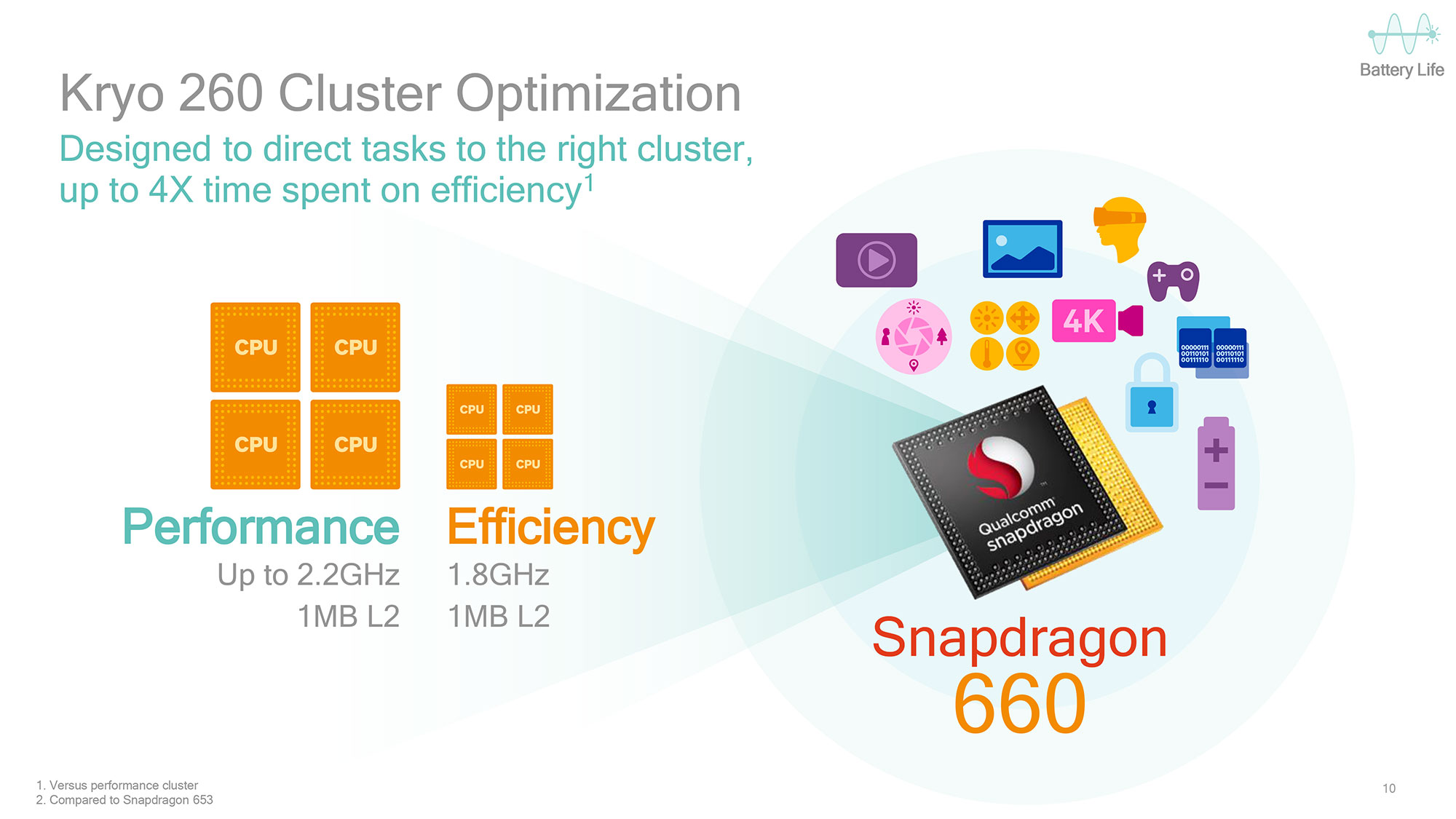 Continue reading about the new Qualcomm Snapdragon 660 and 630 Mobile Platform!

The processor improvements in both the Snapdragon 660 and 630 are interesting, and tell a story about the value of ARM evolution and improvement in overall power efficiency. The SD 660 integrates a Kryo 260 CPU with dual quad-core cluster implementations. These are semi-custom designs, though likely built around the ARM Cortex-A73 and A53 cores. The “big” core group runs at up to 2.2 GHz and sports 1MB of L2 cache and the “little” core group runs at up to 1.8 GHz with the same (but independent) 1MB of L2 cache. Considering that the Snapdragon 835 uses the same core configuration, but with slightly lower clock speeds and cache, it would seem likely that the SD 660 is going to perform well in CPU-driven tasks. Qualcomm claims that the SD 660 will run 20% faster than the SD 653. 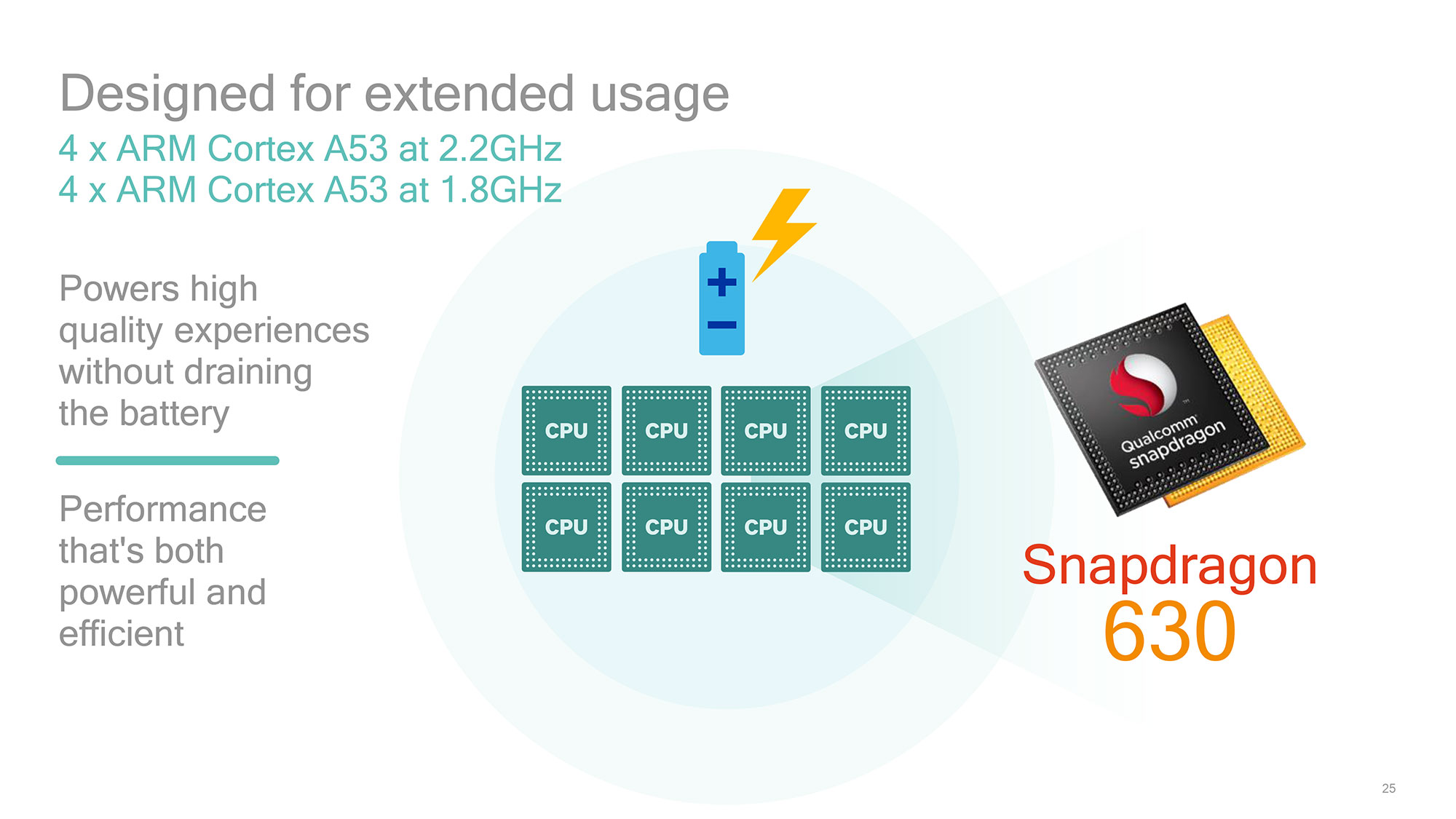 The Snapdragon 630 uses eight Cortex-A53 cores, but in a more granular implementation than the previous SD 626. We have seen it on a couple of chip designs from other vendors, but Qualcomm has gone with dual-cluster setup with four A53s configured to run at 2.2 GHz peak clock and four other A53 cores configured for lower power and a peak clock of 1.8 GHz. This gives the Snapdragon 630 Mobile Platform the advantage of higher performance and lower power without complications or cost (money or die space) of integrating the A73. Qualcomm makes no claims about the CPU performance improvements on the SD 630, though I expect power efficiency to increase with a stable performance metric.

Qualcomm has added a lot to these new platforms, including the updated Spectra 160 ISP (image signal processor) that resides in both the 660 and 630. The Snapdragon 835 launched with the Spectra 180 but the 160 claims support for many of the same features including better low-light photography, a hybrid auto-focus system and dual-camera configurations for either better zooming capability or blurring effects. (Think Portrait mode that Apple integrated on the iPhone 7s.) Both the 660 and 630 gain support for Quick Charge 4, improving charging rates and adding USB Type-C compliance. 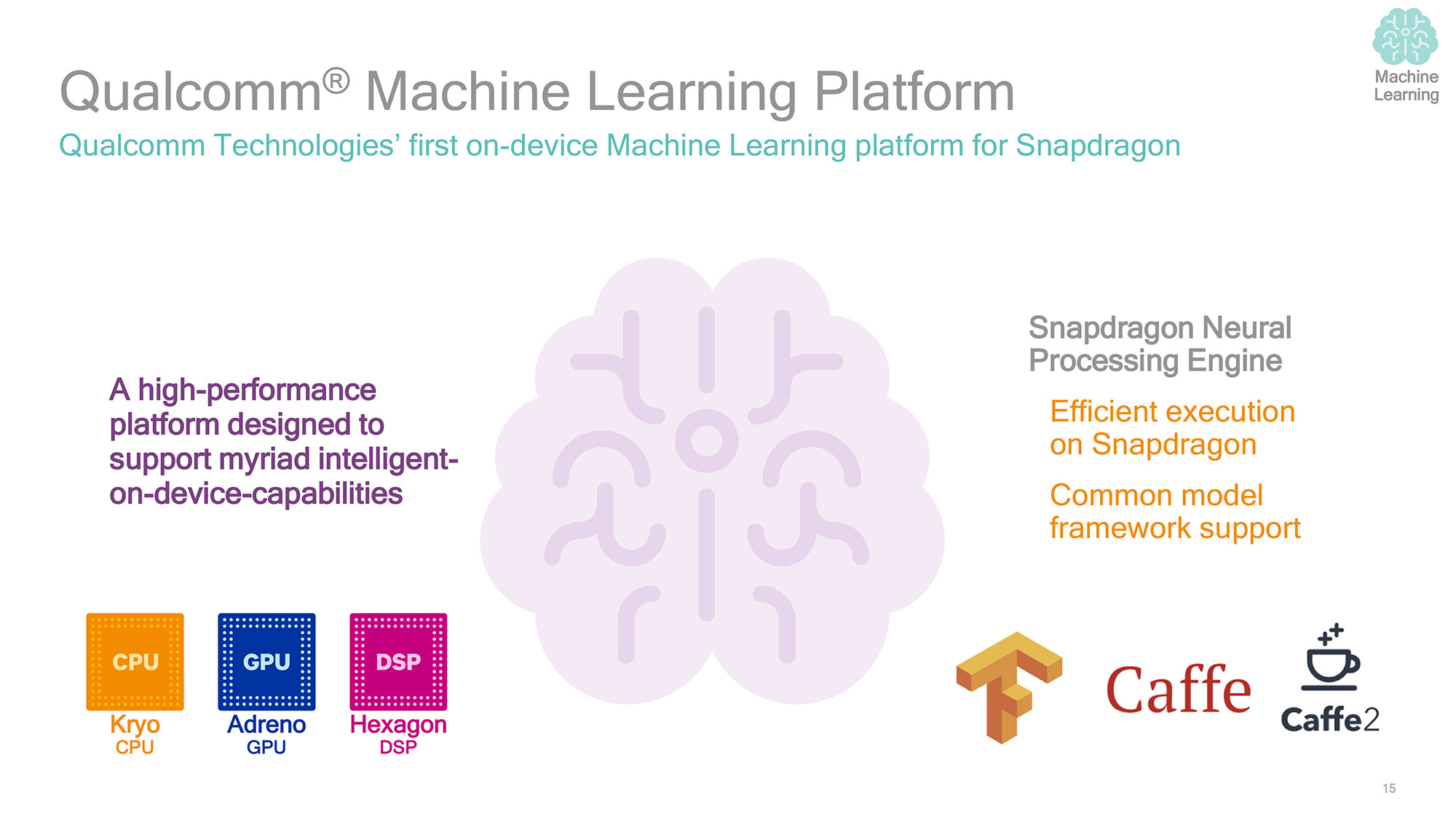 Finally, the DSP does get upgraded on both of these processor platforms as well. The Snapdragon 660 integrates the Hexagon 680 with support for HVX instructions (vector extensions) and the QC All-Ways Aware technology to facilitate better communication across the SoC between the sensors and processing nodes through the Google Awareness API. The high performance DSP allows Qualcomm to integrate its Machine Learning Platform on this mid-range device for efficient execution of the SD Neural Processing Engine. The Snapdragon 630 Mobile Platform includes the Hexagon 642 DSP but lacks the HVX instruction support. 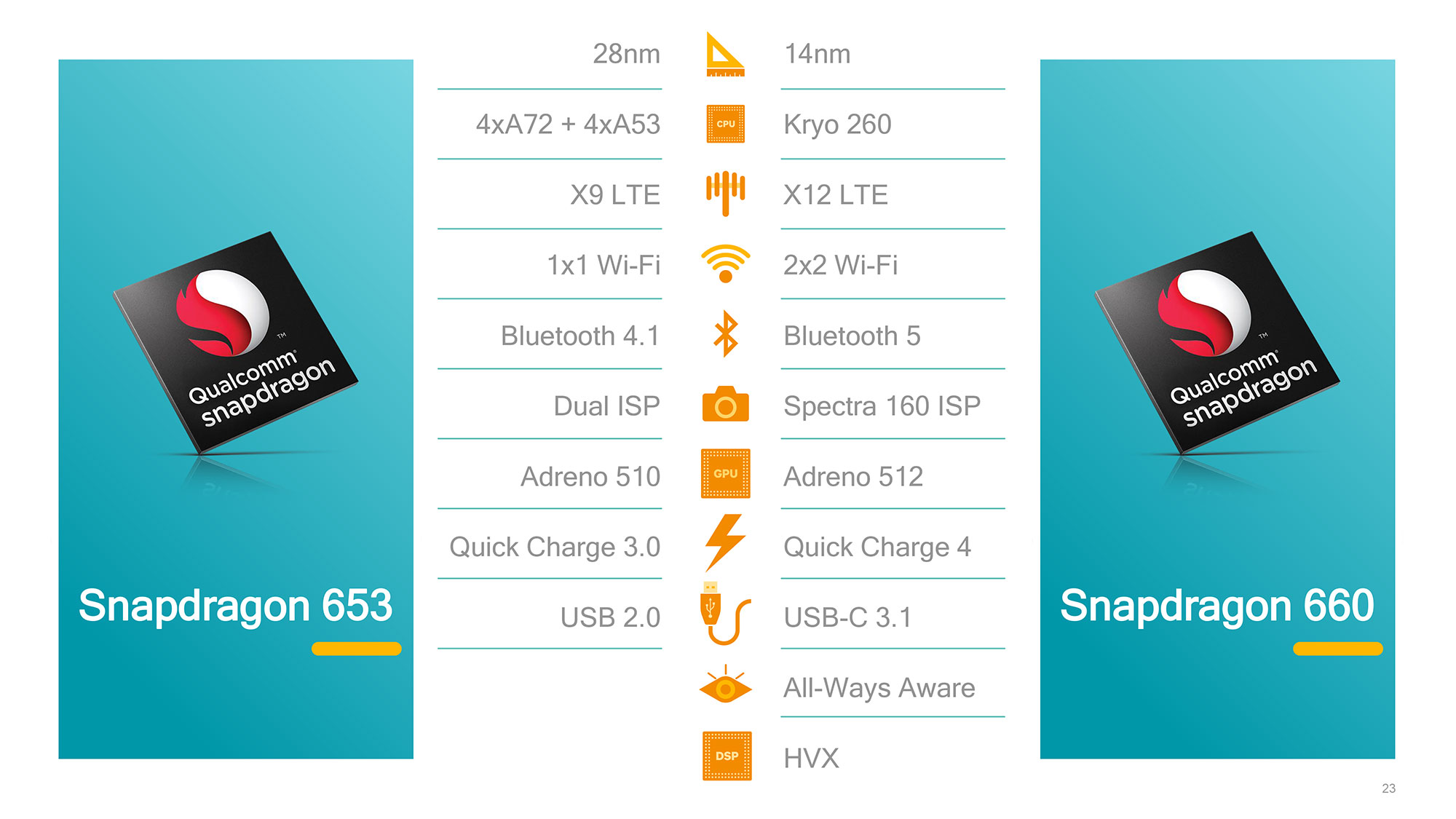 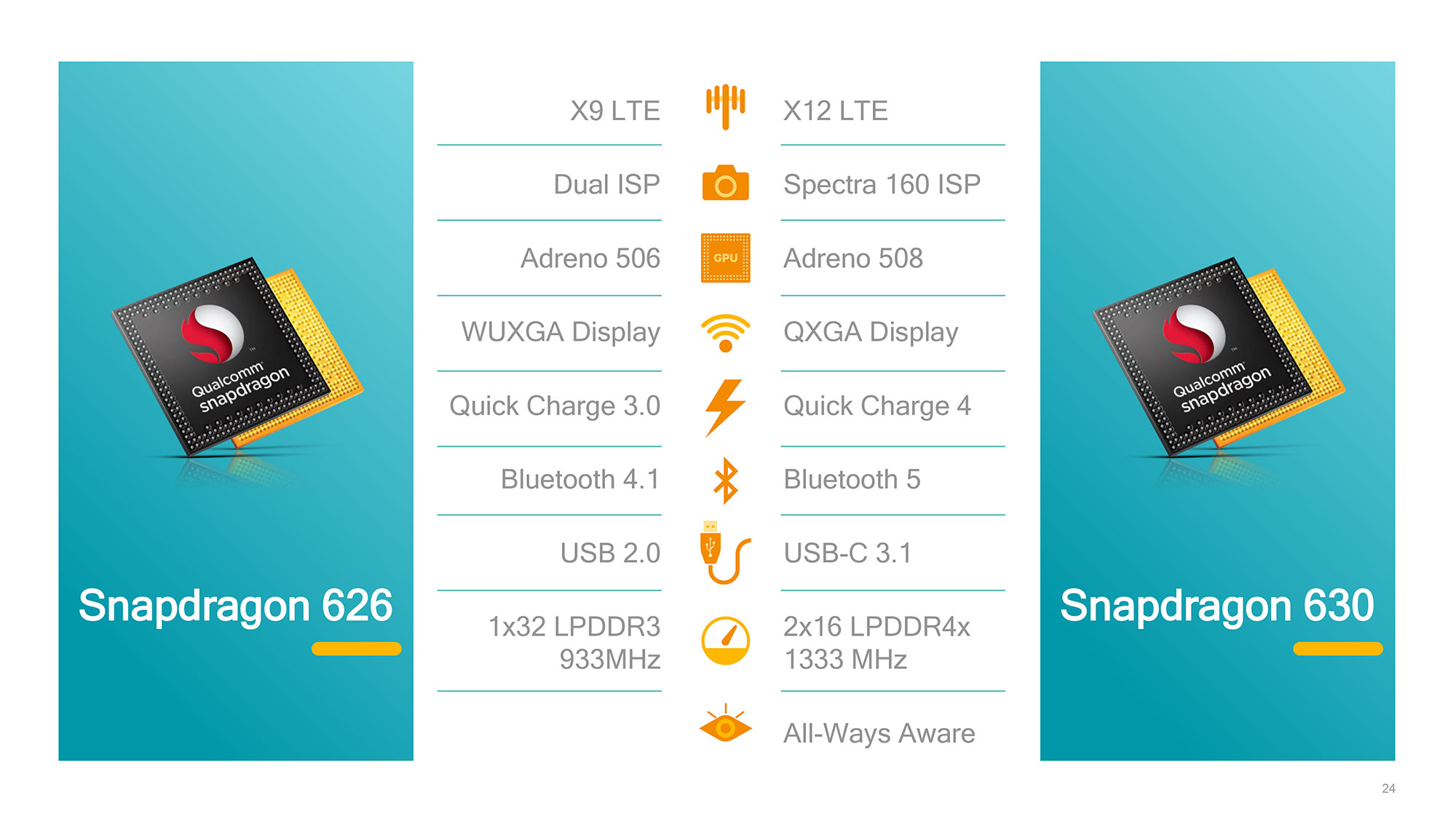 There are other important additions to the family: LPDDR4 memory support for lower power draw, 2×2 Wi-Fi (SD 660), Bluetooth 5, as well the move to 14nm process technology. It seems clear from this announcement that Qualcomm is adamant about strengthening its hold on the mid-range smartphone markets. The Snapdragon 660 and 630 Mobile Platforms look to do exactly that. 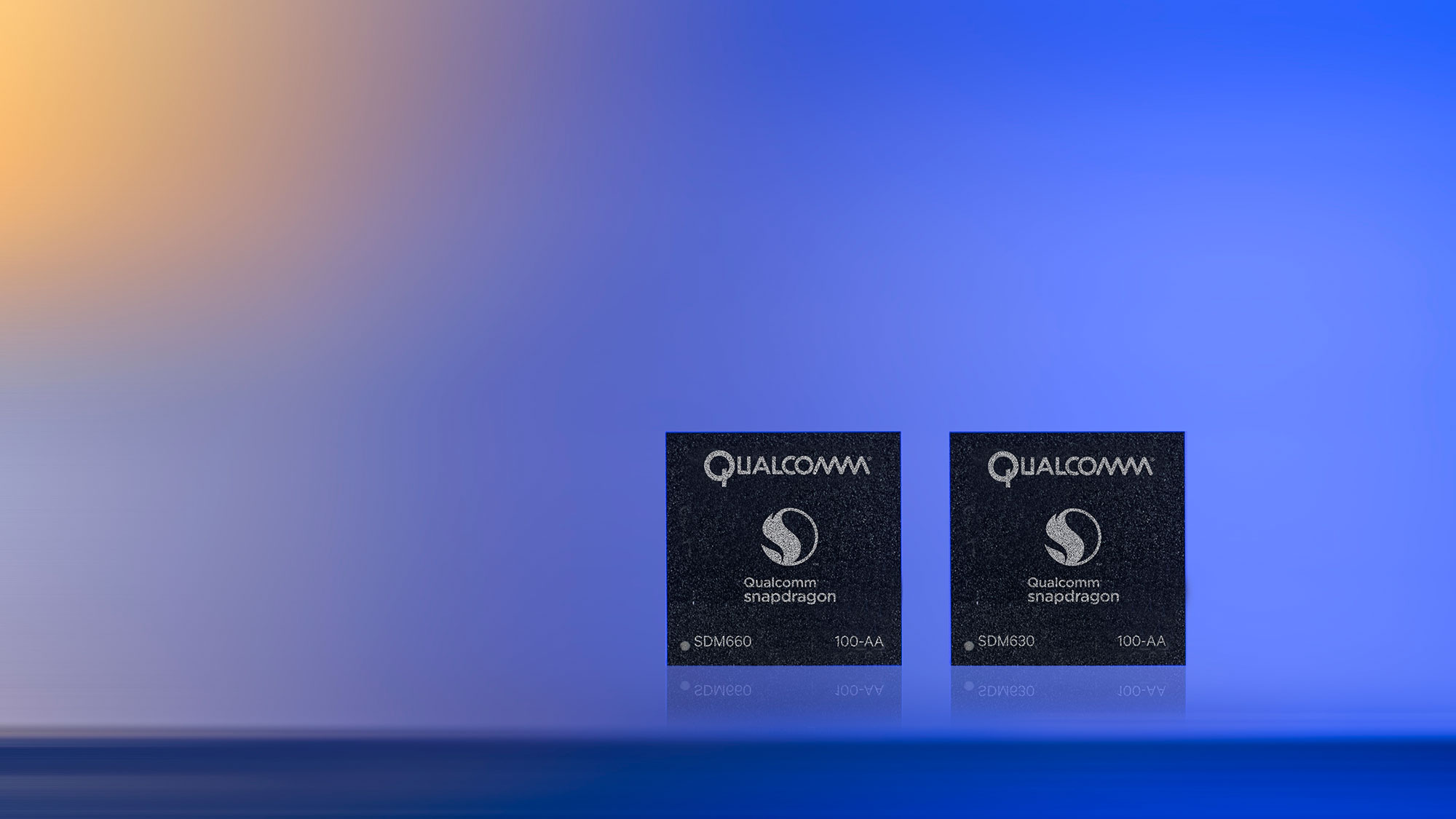 The SD 660 is shipping now and will be in devices starting this quarter, the SD 630 starts shipping at the end of this month with devices expected next quarter. 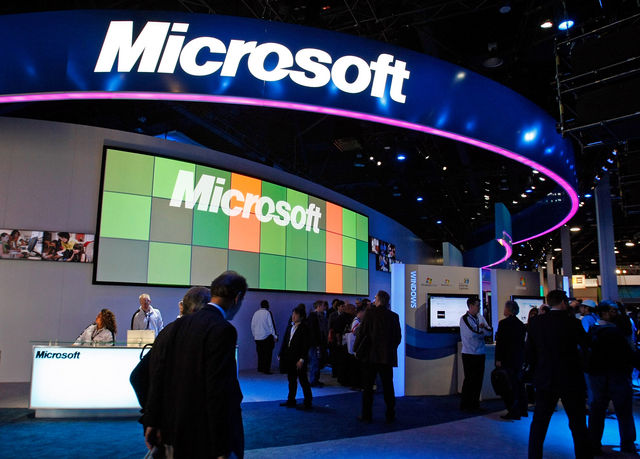 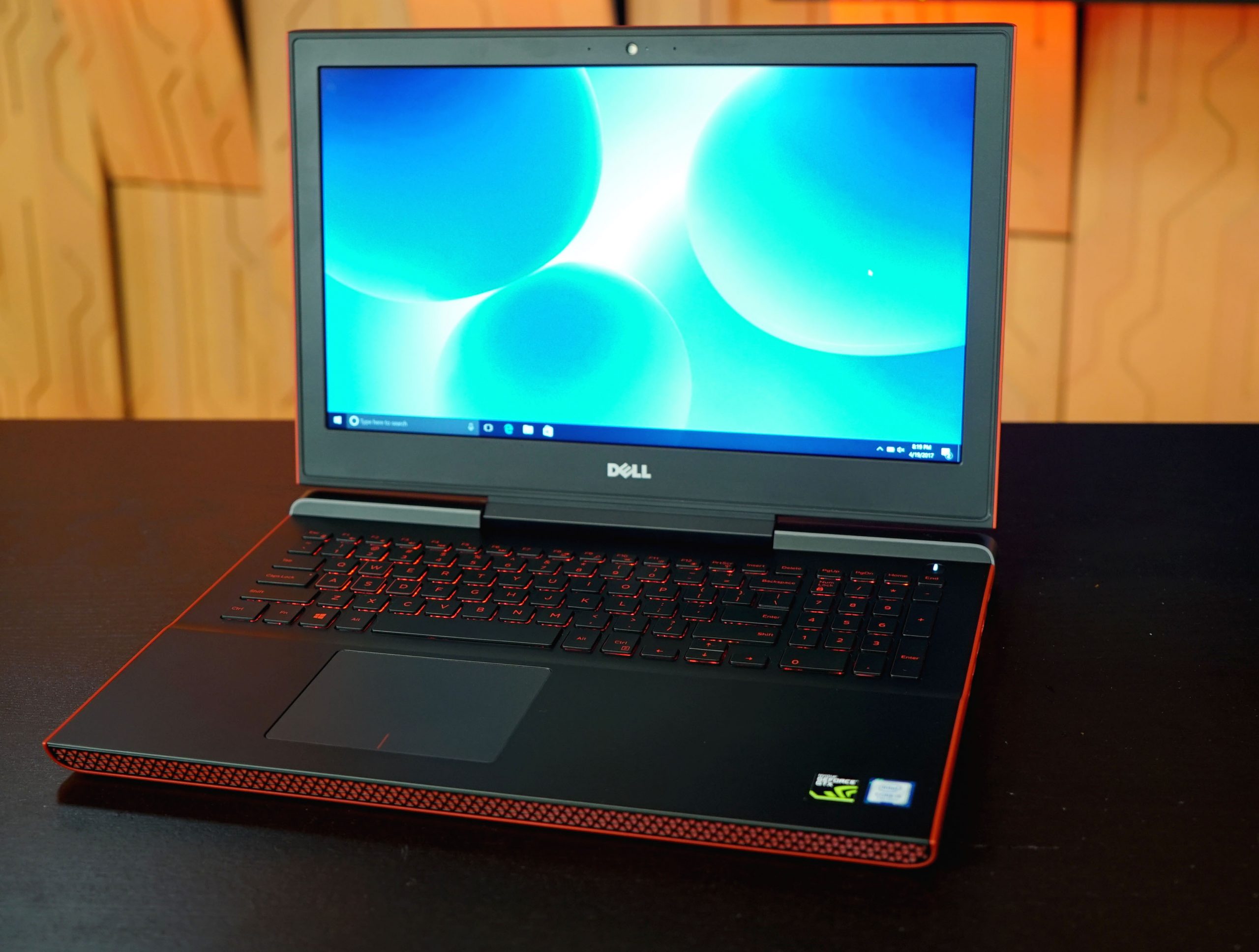