It feels like forever that we've been hearing about 802.11ad. For years it's been an up-and-coming technology, seeing some releases in devices like Dell's WiGig-powered wireless docking stations for Latitude notebooks.

However, with the release of the first wave of 802.11ad routers earlier this year from Netgear and TP-Link there has been new attention drawn to more traditional networking applications for it. This was compounded with the announcement of a plethora of X299-chipset based motherboards at Computex, with some integrating 802.11ad radios.

That brings us to today, where we have the ASUS Prime X299-Deluxe motherboard, which we used in our Skylake-X review. This almost $500 motherboard is the first device we've had our hands on which features both 802.11ac and 802.11ad networking, which presented a great opportunity to get experience with WiGig. With promises of wireless transfer speeds up to 4.6Gbps how could we not?

For our router, we decided to go with the Netgear Nighthawk X10. While the TP-Link and Netgear options appear to share the same model radio for 802.11ad usage, the Netgear has a port for 10 Gigabit networking, something necessary to test the full bandwidth promises of 802.11ad from a wired connection to a wireless client. 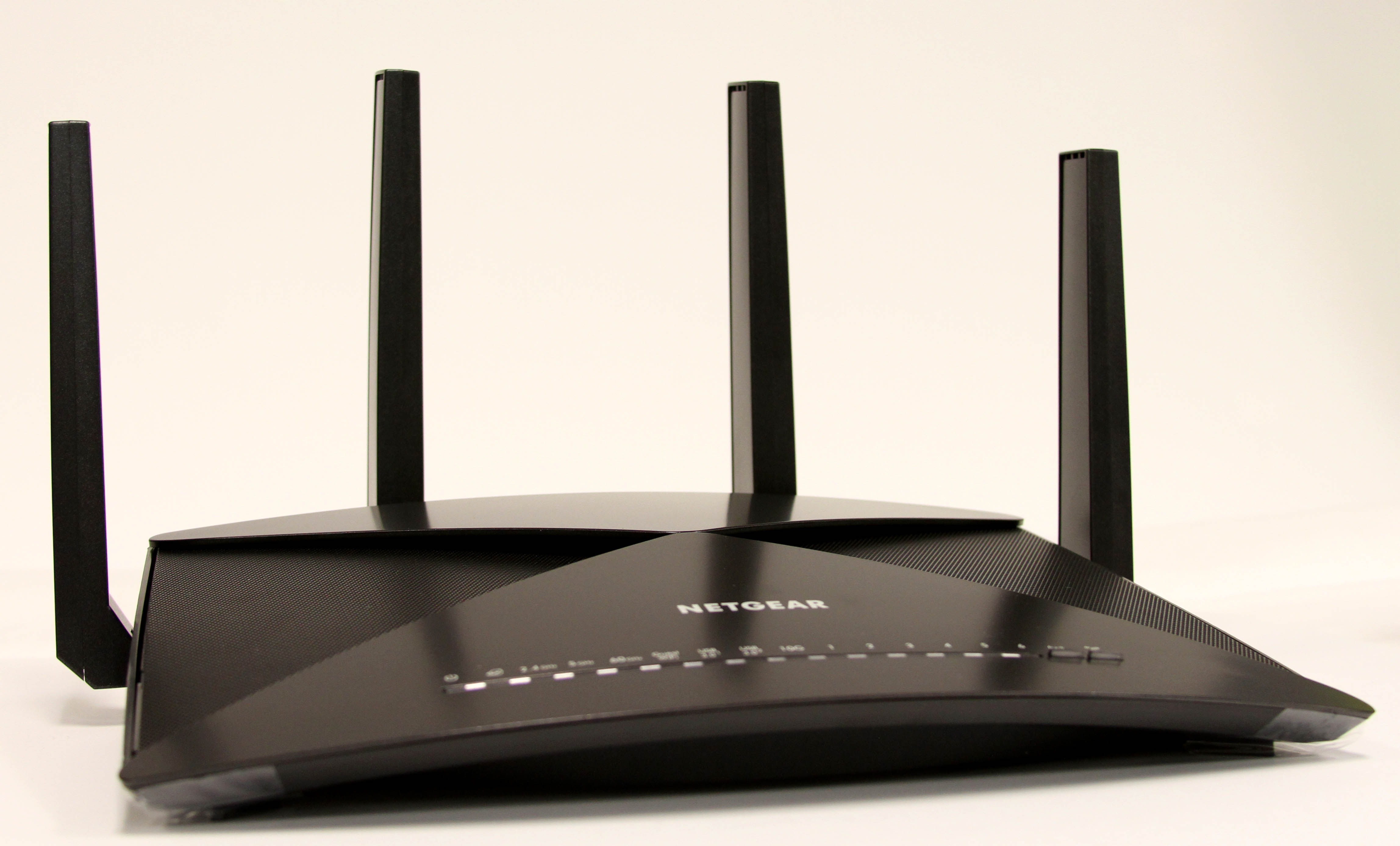 Making things a bit complicated, the Nighthawk X10's 10GbE port utilizes an SFP+ connector, and the 10GbE NIC on our test server, with the ASUS X99‑E‑10G WS motherboard, uses an RJ45 connection for its 10 Gigabit port. In order to remedy this in a manner where we could still move the router away from the test client to test the range, we used a Netgear ProSAFE XS716E 10GigE switch as the go-between.

Essentially, it works like this. We are connecting the Nighthawk X10 to the ProSAFE switch through a SFP+ cable, and then to the test server through 10GBase-T. The 802.11ad client is of course connected wirelessly to the Nighthawk X10.

On the software side, we are using the tried and true iPerf3. You run this software in server mode on the host machine and connect to that machine through the same piece of software in client mode. In this case, we are running iPerf with 10 parallel clients, over a 30-second period which is then averaged to get the resulting bandwidth of the connection. 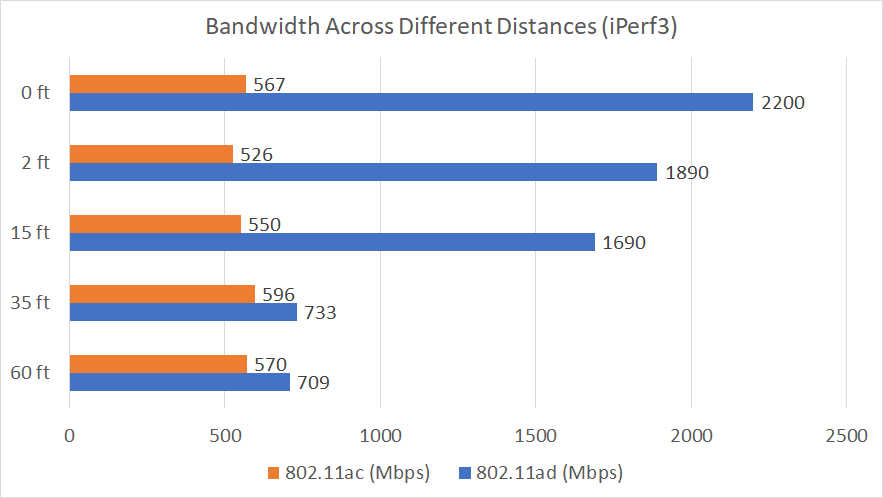 There are two main takeaways from this chart – the maximum bandwidth comparison to 802.11ac, and the scaling of 802.11ad with distance.

However, when you take a look at the bandwidth drops as we move the router and client further and further away, we start to see some of the main issues with 802.11ad.

Instead of using more traditional frequency ranges like 2.4GHz and 5.0GHz like we've seen from Wi-Fi for so many years, 802.11ad uses frequency in the unlicensed 60GHz spectrum. Without getting too technical about RF technology, essentially this means that 802.11ad is capable of extremely high bandwidth rates, but cannot penetrate walls with line of sight between devices being ideal. In our testing, we even found that the given orientation of the router made a big difference. Rotating the router 180 degrees allowed us to connect or not in some scenarios.

That being said, taking another look at our results you can see that in all cases the 802.11ad connection is faster than the 802.11ac results, which is good. For the promised applications of 802.11ad where the device and router are in the same room of reasonable size, WiGig seems to be delivering most of what is promised. 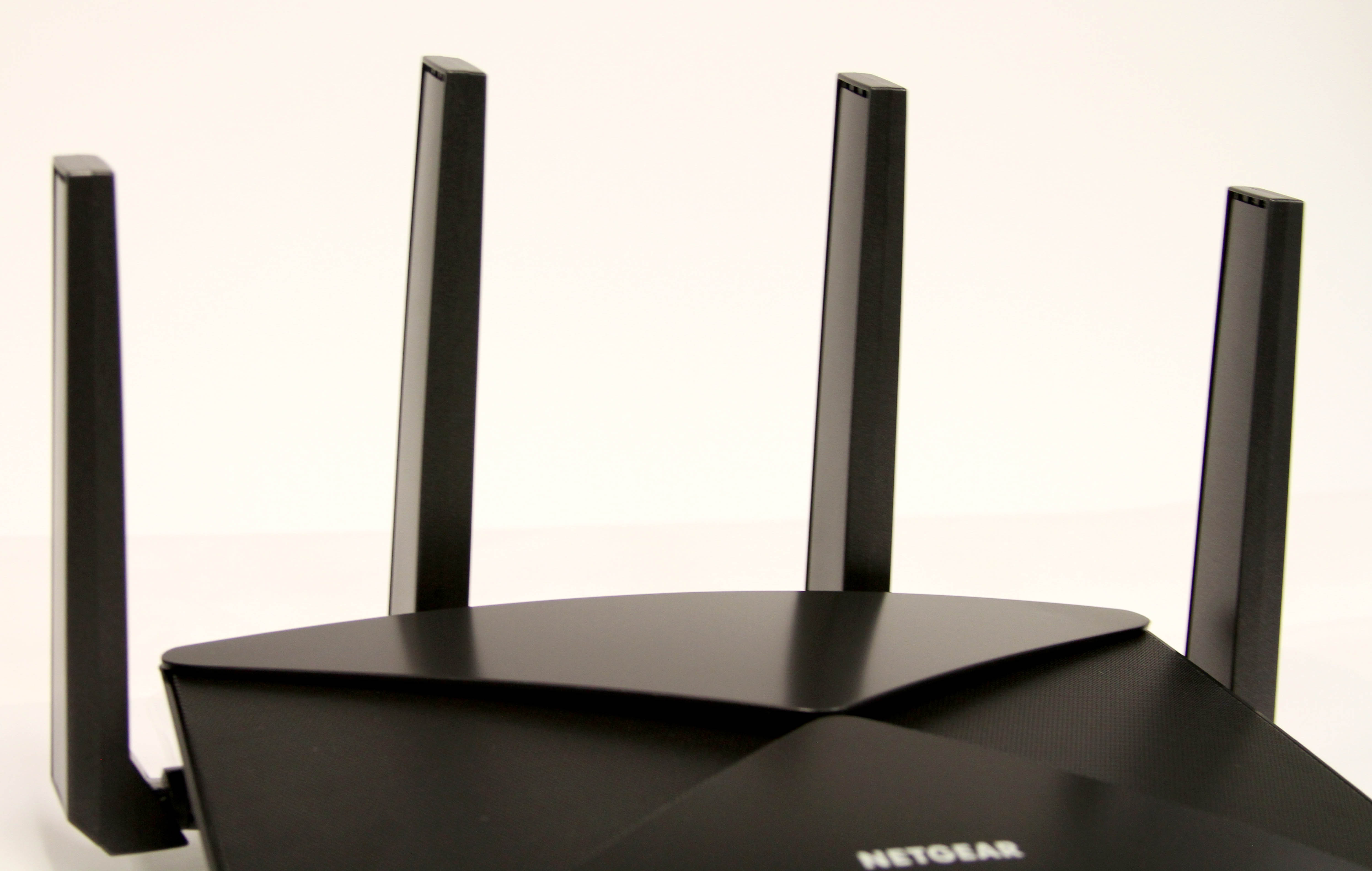 It is likely we won't see high adoption rates of 802.11ad for networking computers. The range limitations are just too stark to be a solution that works for most homes. However, I do think WiGig has a lot of promise to replace cables in other situations. We've seen notebook docks utilizing WiGig and there has been a lot of buzz about VR headsets utilizing WiGig for wireless connectivity to gaming PCs.

802.11ad networking is in its infancy, so this is all subject to change. Stay tuned to PC Perspective for continuing news on 802.11ad and other wireless technologies!