AMD have released their new HPC card, the Radeon Vega Frontier Edition, which Jim told you about earlier this week.  The air cooled version is available now, with an MSRP of $999USD followed by a water-cooled edition arriving in Q3 with price tag of $1499.

The specs they list for the cards are impressive and compare favourably to NVIDIA's P100 which is the card AMD tested against, offering higher TFLOPS for both FP32 and FP16 operations though the memory bandwidth lags a little behind.

The memory size for the Vega is interesting, HBC is AMDs High Bandwidth Cache Controller which not only uses the memory cache more effectively but is able to reach out to other high performance system memory for help.  AMD states that the Radeon Vega Frontier Edition has the capability of expanding traditional GPU memory to 256TB; perhaps allowing new texture mods for Skyrim or Fallout!  Expect to see more detail on this feature once we can get our hands on a card to abuse, nicely of course. 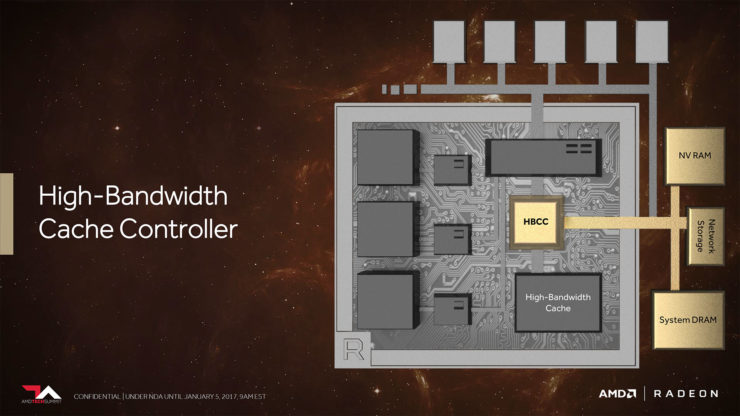 AMD used the DeepBench Benchmark to provide comparative results, the AMD Vega FE system used a dual socketed system with Xeon E5 2640v4s @ 2.4Ghz 10C/20T, 32GB DDR4 per socket, on Ubuntu 16.04 LTS with ROCm 1.5, and OpenCL 1.2, the NVIDIA Tesla P100 system used the same hardware with the CuDNN 5.1, Driver 375.39 and Cuda version 8.0.61 drivers.  Those tests showed the AMD system completing the benchmark in 88.7ms, the Tesla P100 completed in 133.1 ms, quite an impressive lead for AMD.  Again, there will be much more information on performance once the Vega FE can be tested.

Read on to hear about the new card in AMD's own words, with links to their sites.

Designed to empower the next generation of data scientists, game designers and visualization professionals, Radeon Vega Frontier Edition allows users to tackle massive datasets with ease, and scored up to 33 percent faster than the competition in the DeepBench benchmark measuring the performance of basic operations involved in training deep neural networks.

The first graphics card on the market to feature AMD’s “Vega” GPU architecture, Radeon Vega Frontier Edition together with the power of Radeon Pro Software enables data scientists, creators and developers to pursue new frontiers in their fields with:

Radeon Vega Frontier Edition graphics cards are available from etailers in select regions today with an SEP of $999 USD for the air-cooled edition. The water-cooled edition is expected to launch in Q3 with an SEP of $1499. You can find more information here. Following the beta release of the Radeon ProRender plug-in for Blender and the Radeon ProRender add-in for SOLIDWORKS earlier this year, the first production versions are freely available for download here. AMD is also releasing a beta version of its Radeon ProRender Game Engine Importer, a tool that allows you to easily import your geometry and materials using Radeon ProRender from applications like SOLIDWORKS right into Unreal Engine and view them in VR. Check out the following blog to learn more.