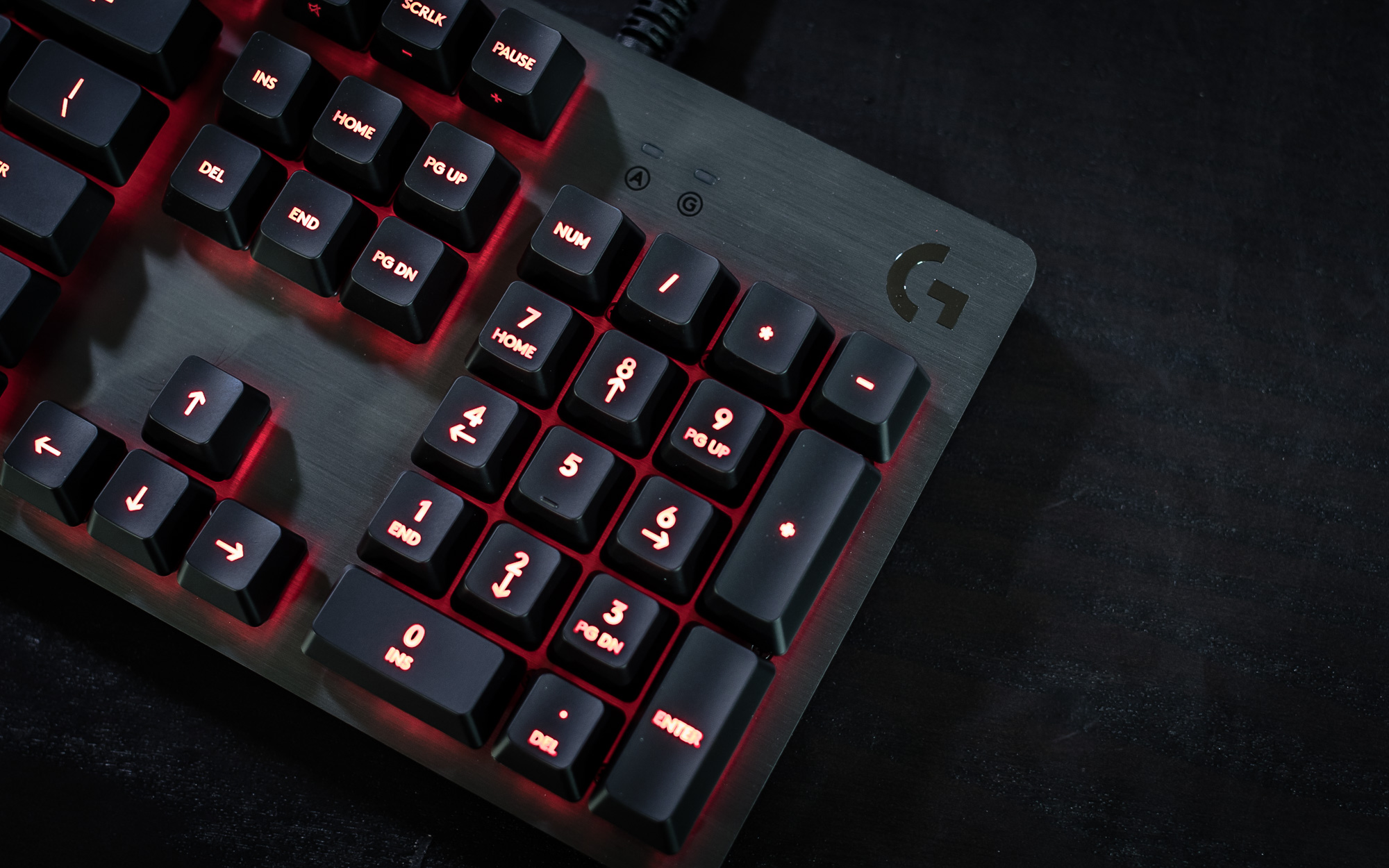 The rise in popularity of mechanical gaming keyboards has been accompanied by the spread of RGB backlighting. But RGBs, which often include intricate control systems and software, can significantly raise the price of an already expensive peripheral. There are many cheaper non-backlit mechanical keyboards out there, but they are often focused on typing, and lack the design and features that are unique to the gaming keyboard market.

Gamers on a budget, or those who simply dislike fancy RGB lights, are therefore faced with a relative dearth of options, and it's exactly this market segment that Logitech is targeting with its G413 Mechanical Gaming Keyboard.

Like some of its other recent keyboards, the G413 scales back on the wilder designs that defined Logitech's early gaming keyboards. The G413 features a relatively minimalist design set into an "aircraft-grade" aluminum alloy top case, Logitech's exclusive Romer-G mechanical switches with a single color LED backlight, 26-key rollover, and support for the Logitech Gaming Software suite, which lets users control the backlight, map user-defined function keys, and configure game-specific profiles for both functionality and lighting.

You'll also find a full set of function key-activated media playback controls, height-adjustable feet, a USB 2.0 passthrough port for connecting or charging your mouse, and a dedicated Game Mode, which prevents the Windows Key from launching the Start Menu — and therefore potentially pulling you out of the game at a crucial moment — when activated. The Logitech Gaming Software can also be used to configure additional keys to be controlled by Game Mode. 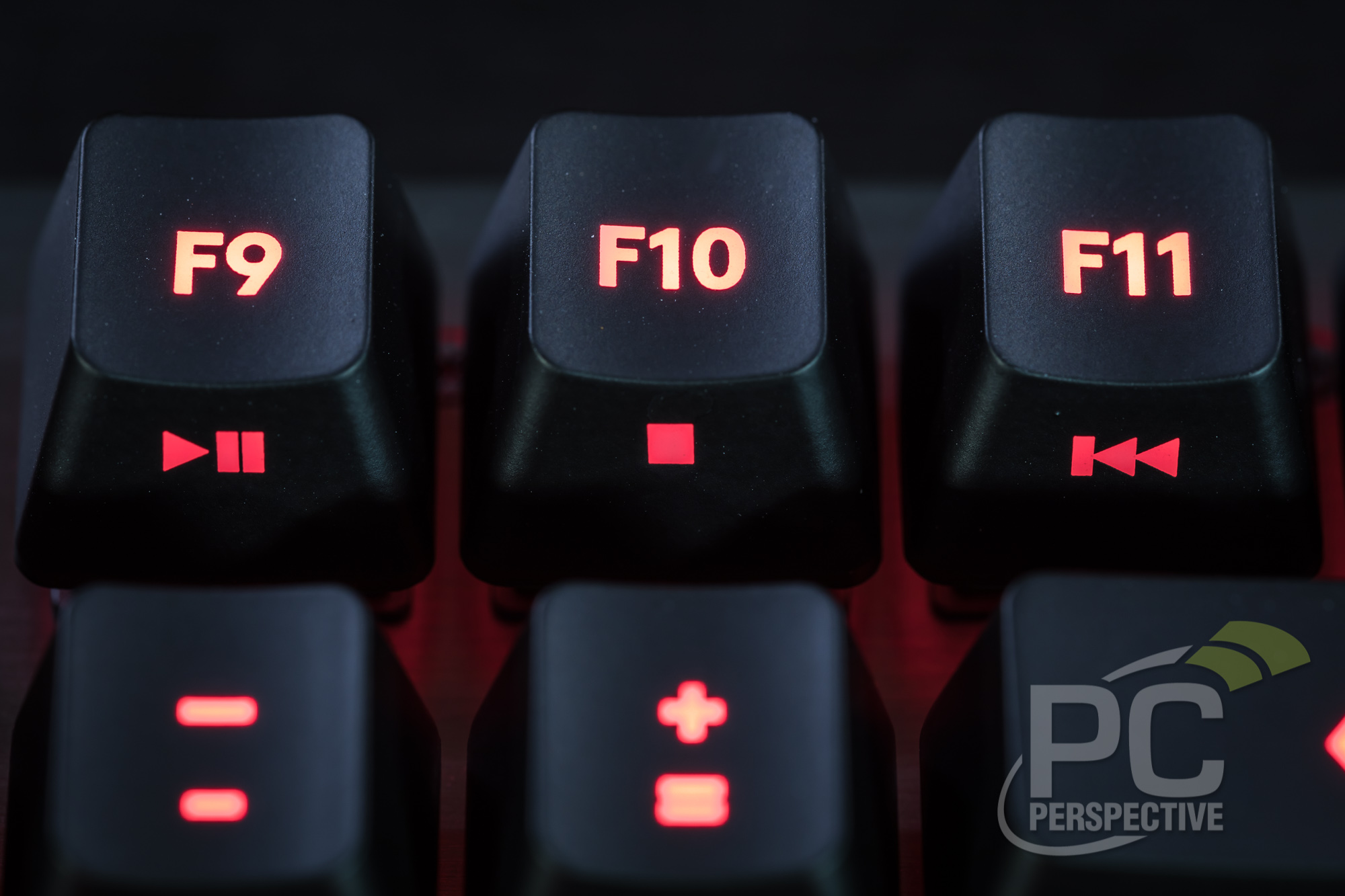 The G413 is currently available in two color and backlight combinations: black body with red backlight (as reviewed), and silver body with white backlight. Both models carry the same list price and feature set. 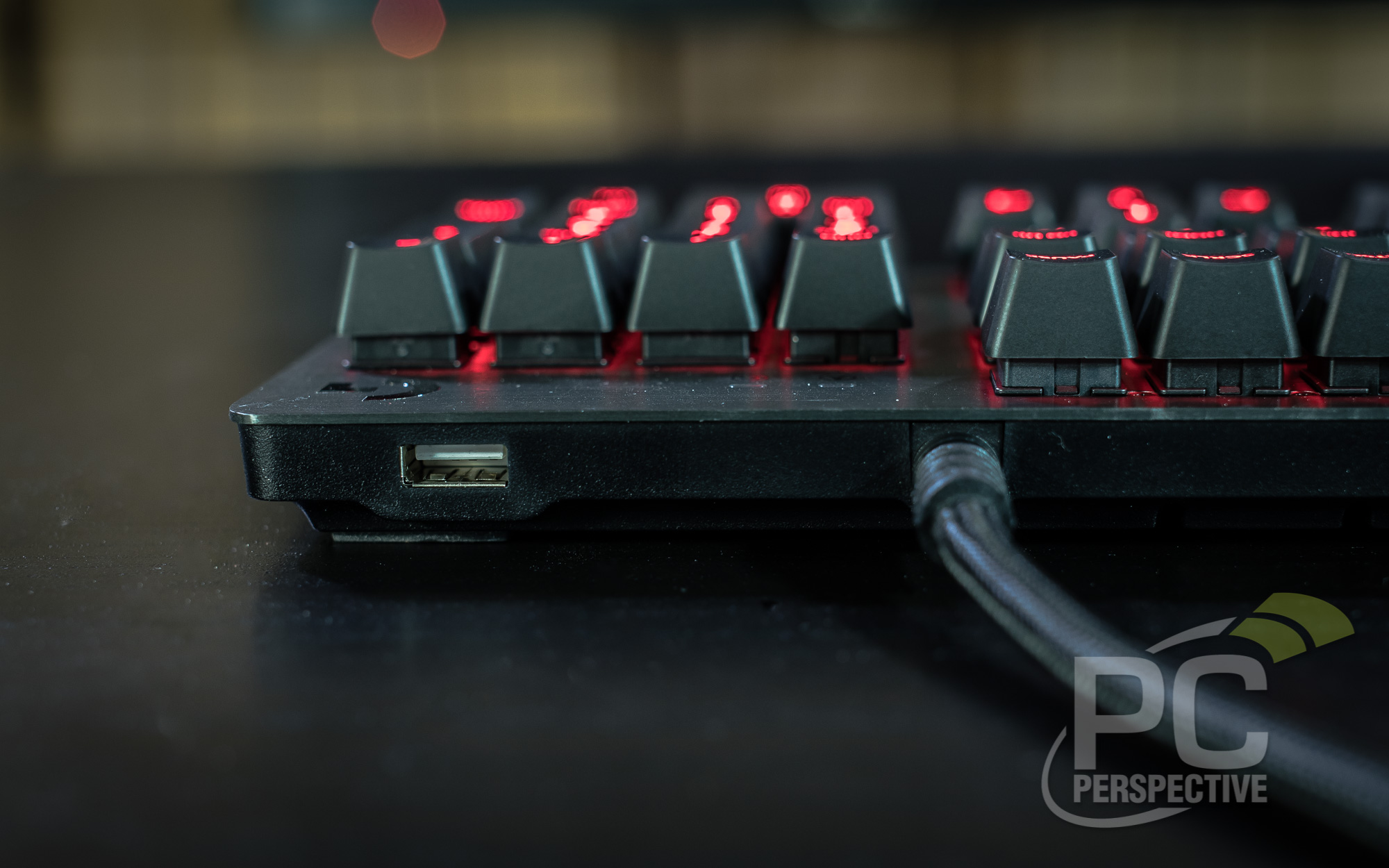 Speaking of price, that's the one factor that truly defines the Logitech G413. With a street price of around $90, the G413 comes in quite a bit cheaper than other full-sized RGB keyboards, but without costing the user any core gaming functionality. Take, for example, the Logitech G810 which sports a nearly identical design to the G410 but includes a full RGB backlight system. The G810 has a list price of $160, and retails between $130 and $150.

As a baseline for putting my impressions of the G413 in context, the two keyboards I use regularly are the Das Keyboard 4 Professional with Cherry MX Blue switches, and the Razer Ornata Chroma, with the company's hybrid "Mecha-Membrane" switches.

While gaming on the G413 felt fine immediately, it took some time to adjust my typing to the keyboard's Romer-G switches. The actuation of my key presses was just as quick as my other keyboards, but it lacked the satisfying tactile feedback I was accustomed to, and despite a few weeks of use, I never got completely comfortable with typing on the G413.

(Editor's note: Everyone's favoritism for keyboard feel is going to be different. I for one am a big fan of typing on the Romer-G switches as they provide a decent amount of feedback but without the noise of many other switch designs. The vast majority of content I write on PC Perspective is done on a Logitech G910. To each their own in this regard! -Ryan)

That's not the G413's fault, of course, as I simply prefer a "clickier" experience, and the Romer-G's bottom-out a bit too softly for my taste. But those who have already used and enjoyed Romer-G switches on other Logitech keyboards, or those who have opted for Cherry MX Brown switches (probably the closest Cherry switch to the Romer-G), won't have any complaints.

For those already familiar with it, there's not much new with the Logitech Gaming Software when it comes to the G413. By default, the software will scan your PC for compatible games upon first launch, and offer to install any available game-specific profiles. 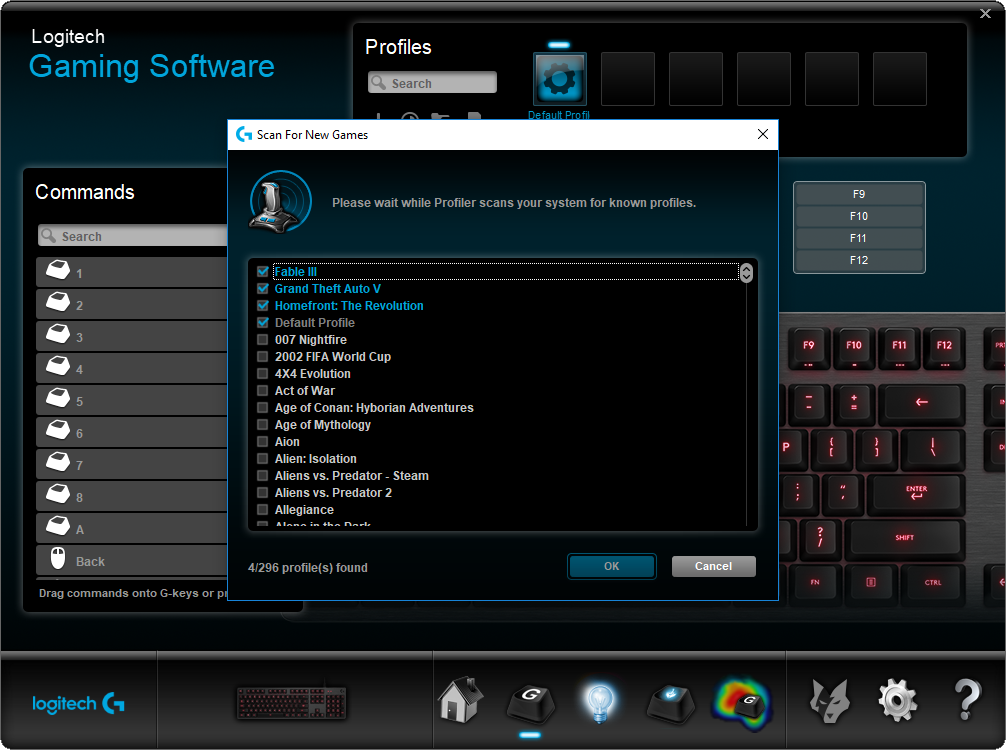 These profiles help make up for the G413's lack of the dedicated gaming and macro buttons found on higher-end gaming keyboards, allowing the user to configure unique function keys tailored to each game or application. Users can also manually (or automatically, if a game's profile supports it) configure game-specific lighting sequences.

With just a single-color LED backlight, however, lighting options on the G413 are limited. Individual keys can be configured to light up or go dark as the game or user desires, but you won't find the crazy patterns, sequences, or effects that require a full RGB array to accomplish. In general, you'll be able to control the brightness of the full keyboard's backlight, or set a "breathing" pattern at the speed of your choice. It's limited, to be sure, but the clean, simple red backlight is actually a welcome change from the increasingly hectic RGB patterns found on most gaming keyboards. 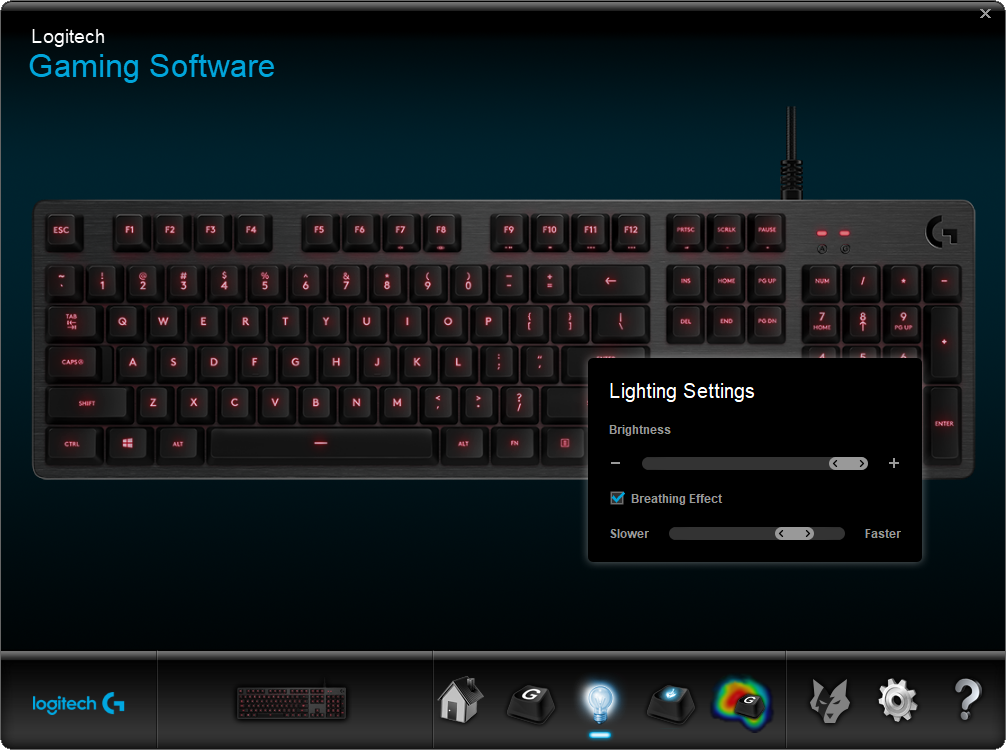 If you happen to own other compatible Logitech peripherals, such as gaming mice or headsets, you can use the Logitech Gaming Software app to configure and manage them in addition to your G413 keyboard.

Those who prefer a clickier, more tactile typing experience may not find the G413's Romer-G switches appealing, but those who like quieter and softer mechanical key switches, or gamers looking for fast key actuation, will definitely want to consider the G413 in the sub-$100 price-point. There are many other gaming keyboards, including some with full-blown RGB, in the same price range, but not many with true mechanical switches.

The Logitech G413 Mechanical Gaming Keyboard is available now for $89.99. 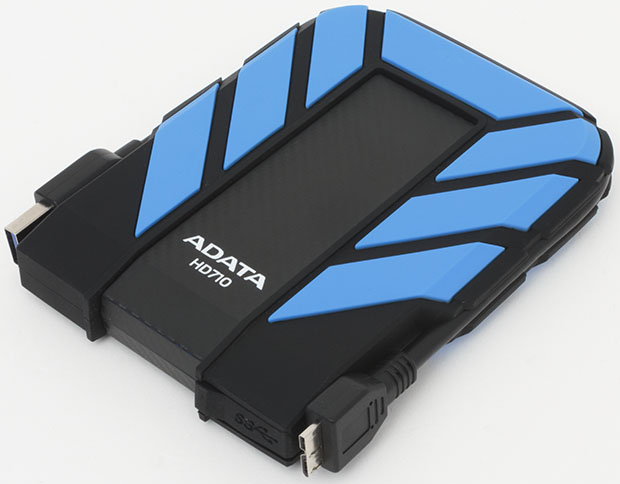 Killer NIC for Christmas, or not? 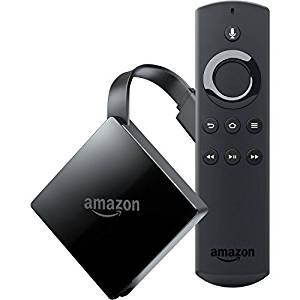