Okay, so there had to be a catch right? 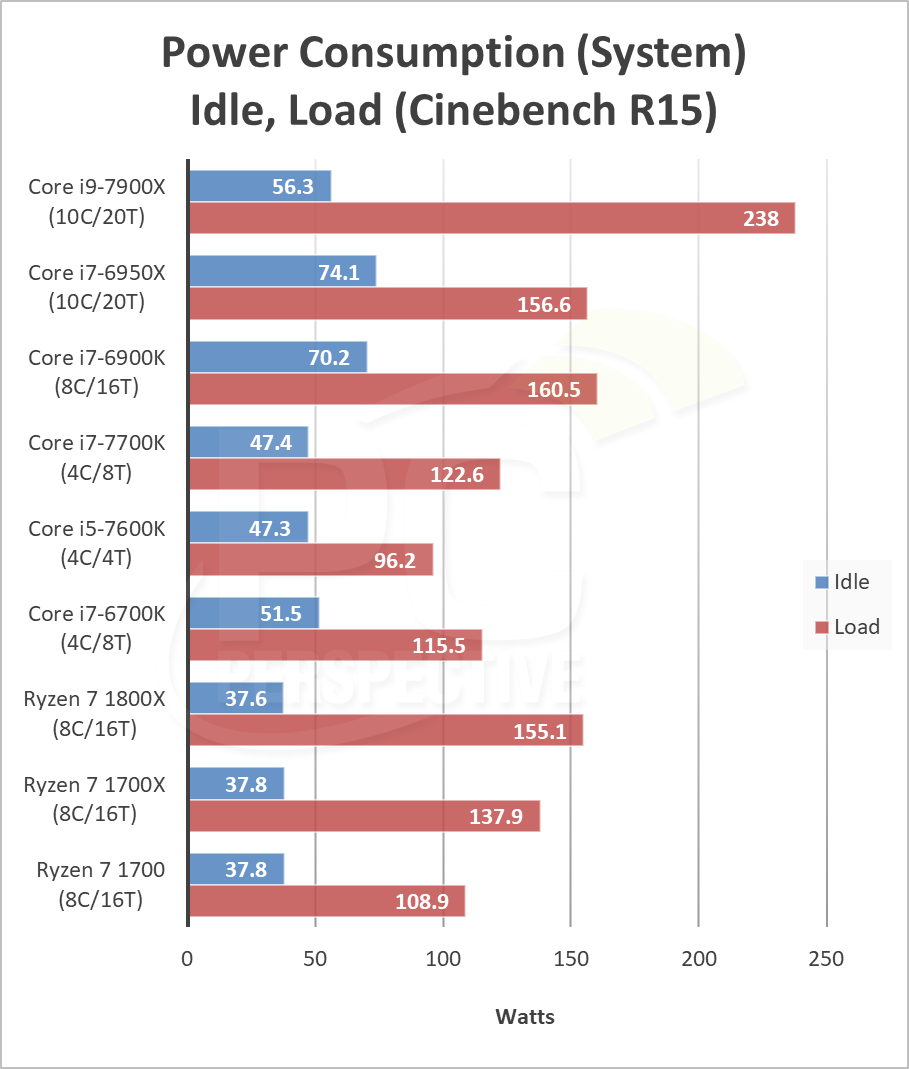 I didn’t believe it at first, but the Core i9-7900X is using more than 70 watts additional power than the Core i7-6950X! Remember that both of these processors have a rated TDP Of 140 watts, so how Intel is able to justify this additional power draw hasn’t yet been answered – I am awaiting a reply to my questions. Idle power on this platform is definitely a plus though, with the X299+SKL-X using nearly 20 watts less than the X99+6950X combination.

With HEDT processors, performance per dollar is always an interesting discussion. Add on to this a $700 price drop on the 10-core solution, which is when we compare the 6950X launch price to the 7900X launch price, there should be substantial gains for Intel here. 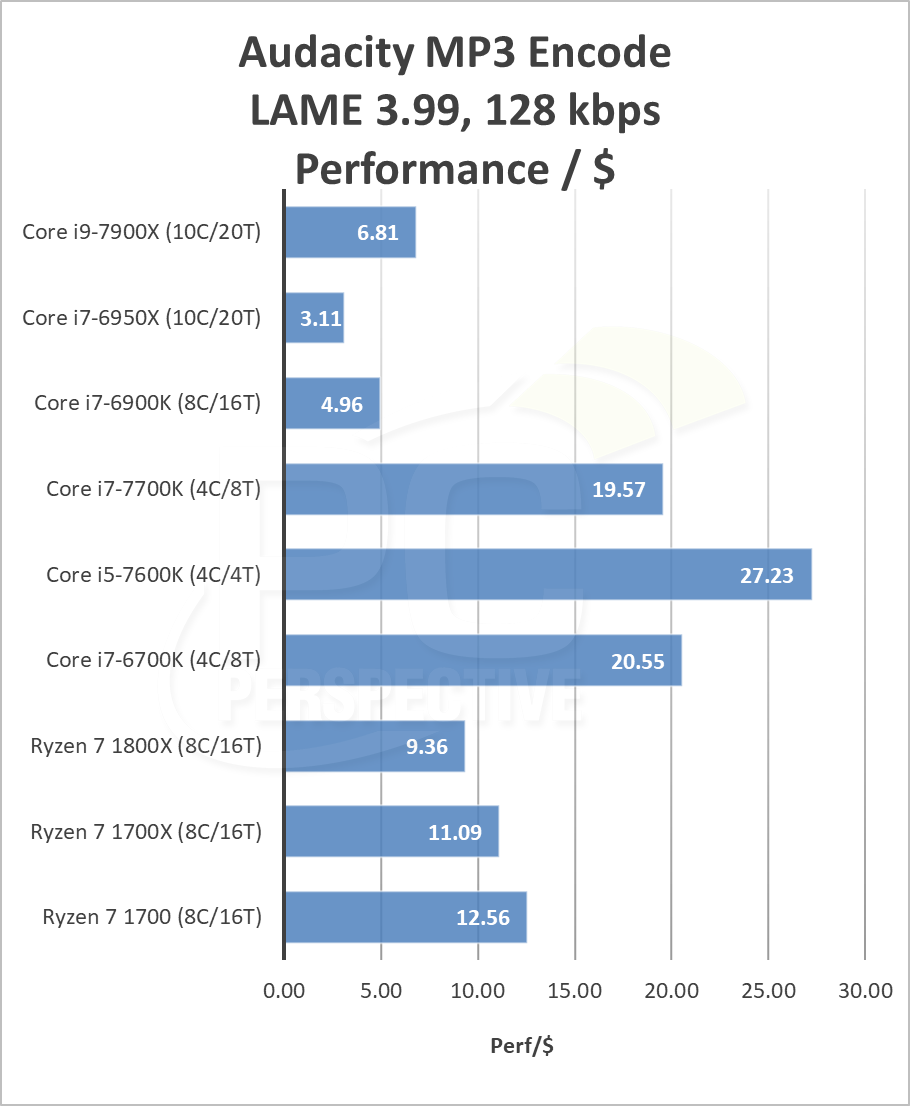 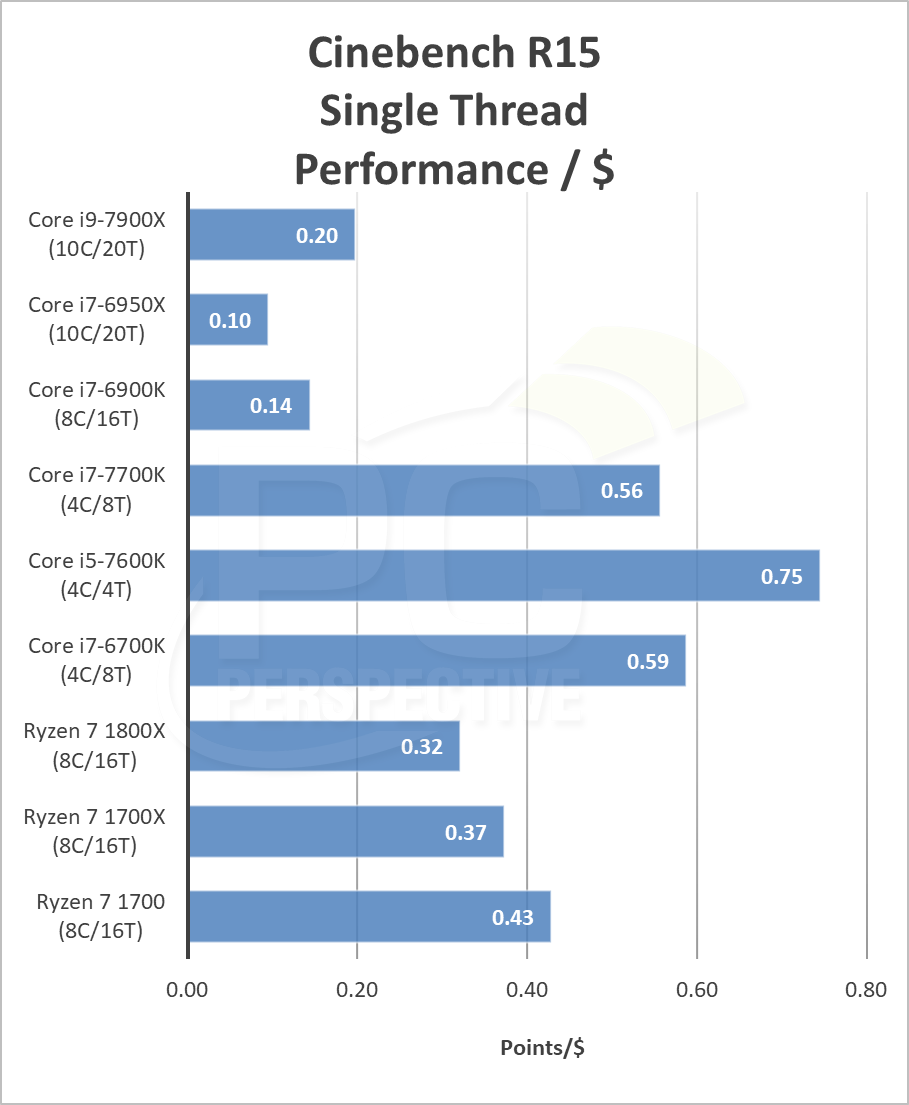 The 7900X is a big jump over the 6950X in terms of single-threaded value, with a much higher performance capability and a big drop in cost. Even with the lower Ryzen 7 1800X ST performance, though, the value of the 7900X doesn’t manage to keep up. 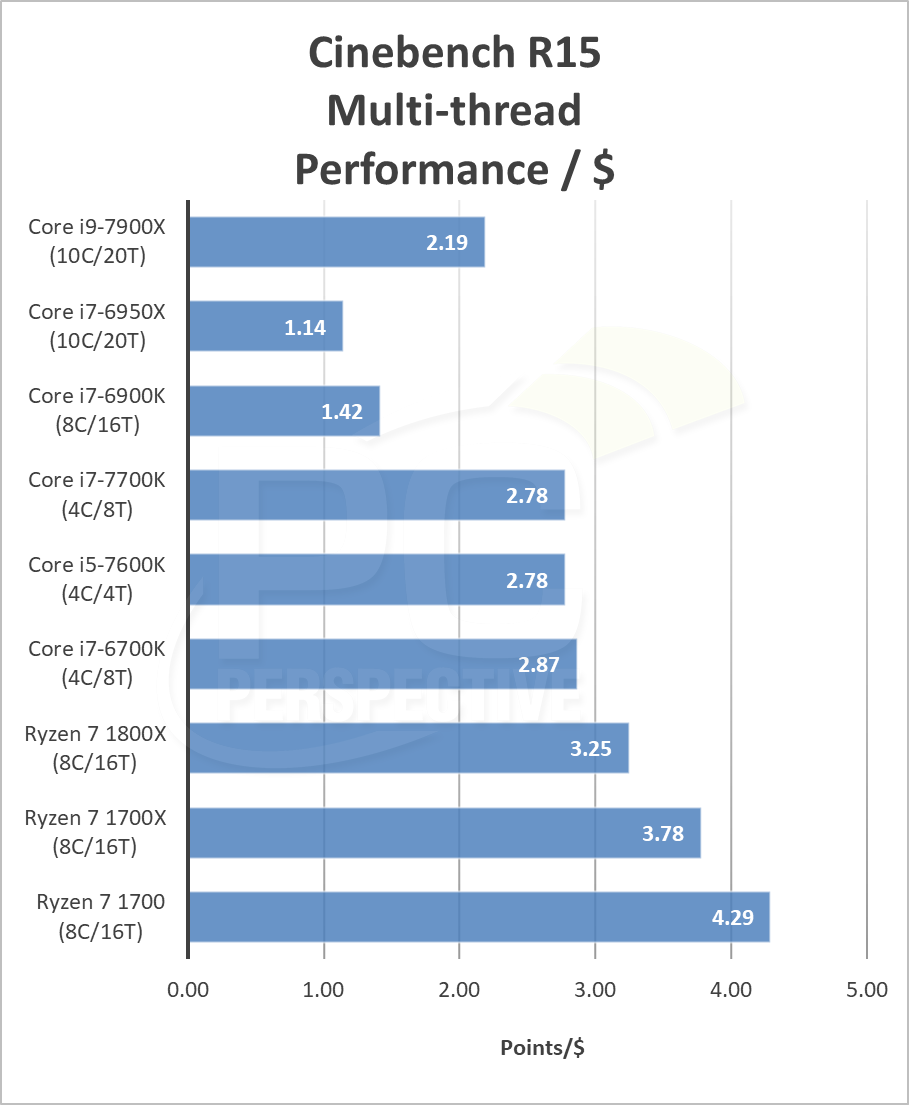 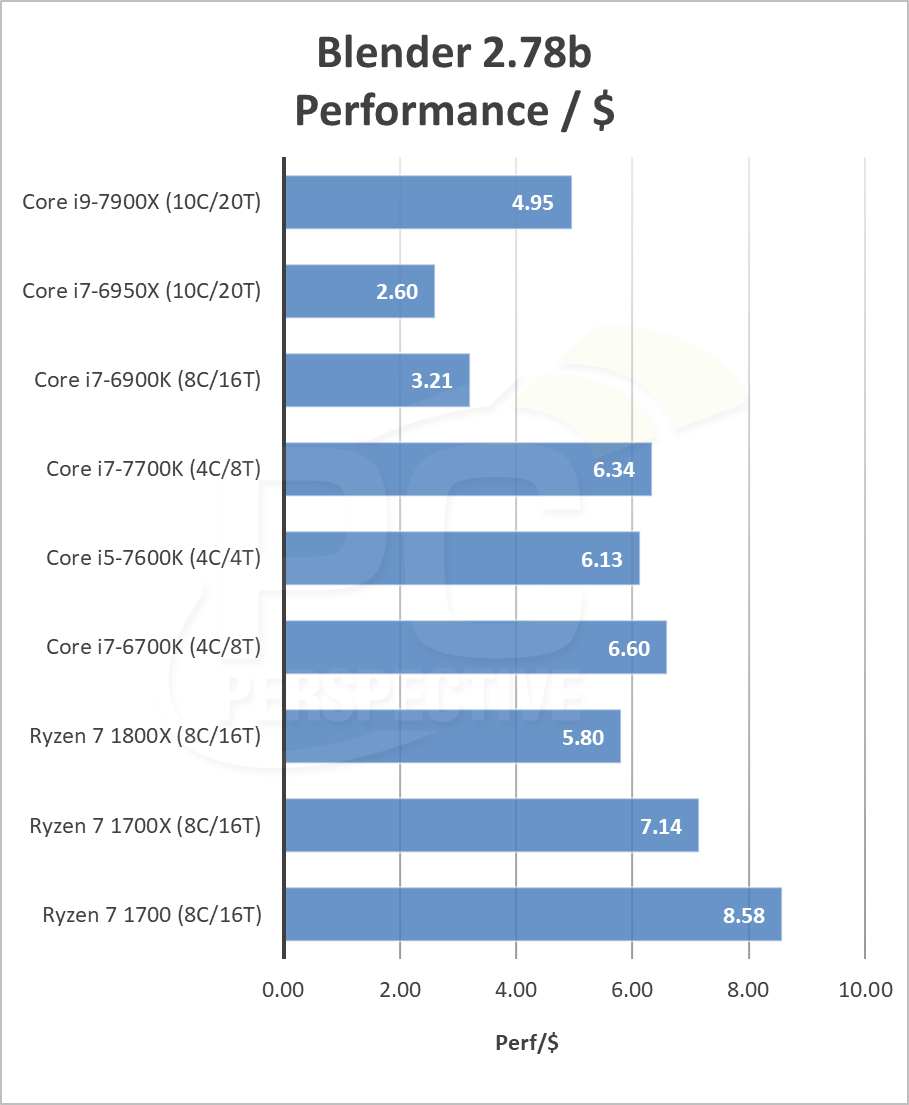 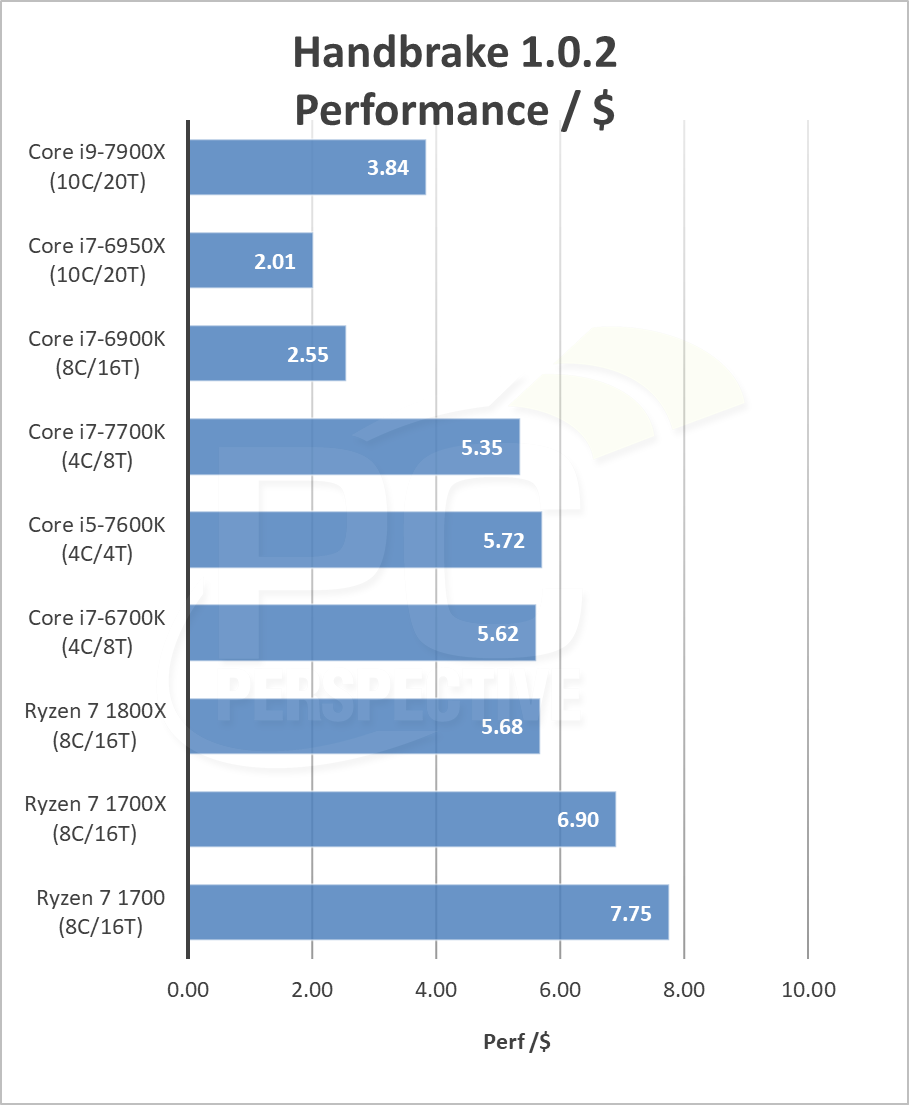 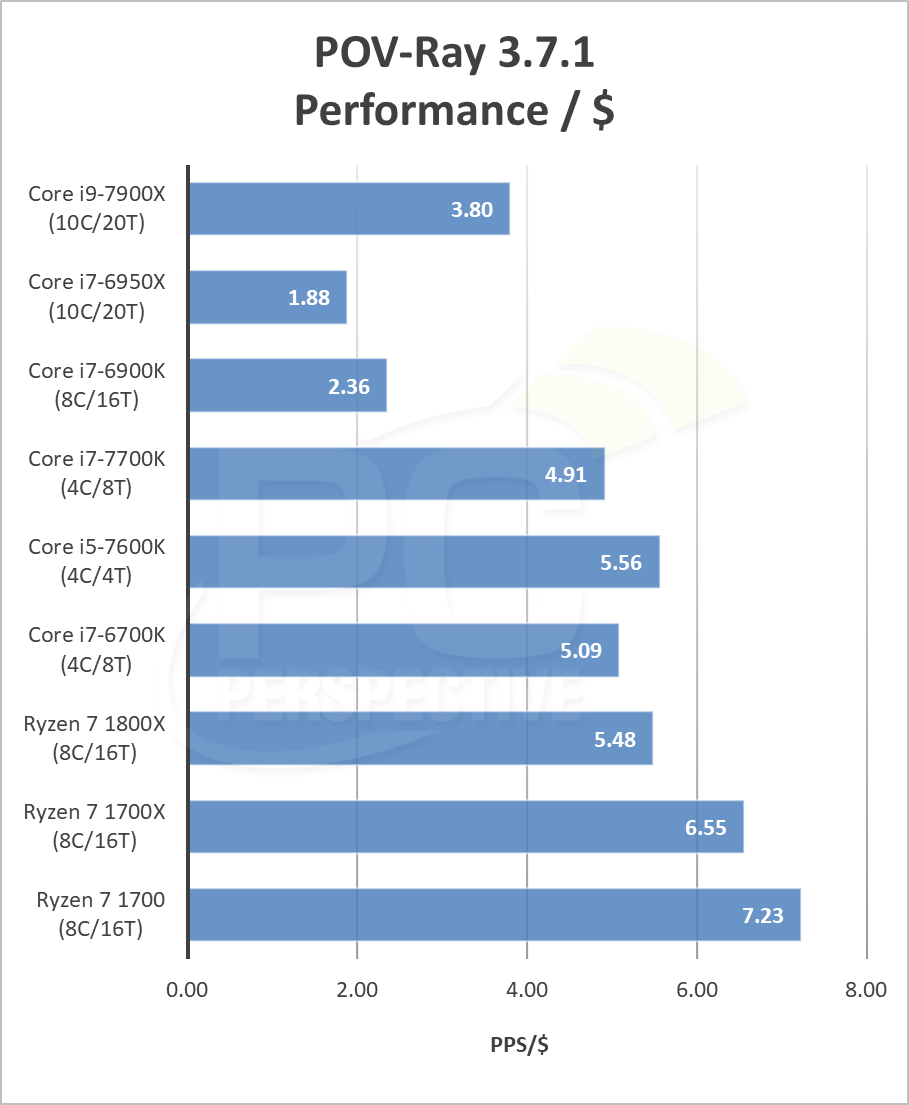 While the 7900X still can’t meet the performance per dollar metrics of the 7700K or Ryzen 7 1800X, it does get much closer than any previous generation of HEDT processor from Intel in my memory. Is it a “value” proposition? Not at all. But, if you crave and need multi-threaded capability, it will be easier to justify the cost difference this generation.

The Core i9-7900X proves to be a performance leader in more areas than I expected at the outset of testing. The multi-threaded performance was a known quantity – 10-cores and 20-threads of performance will tear through most rendering and encoding workloads, and the added clock rate supplied by Skylake-X (and that power draw!) gives us anywhere from a 15-25% advantage over the Core i7-6950X. And while I know we’ll see more options from AMD soon, the 8-core Ryzen 7 1800X is a distant competitor, often falling more than 35% behind in those scenarios. 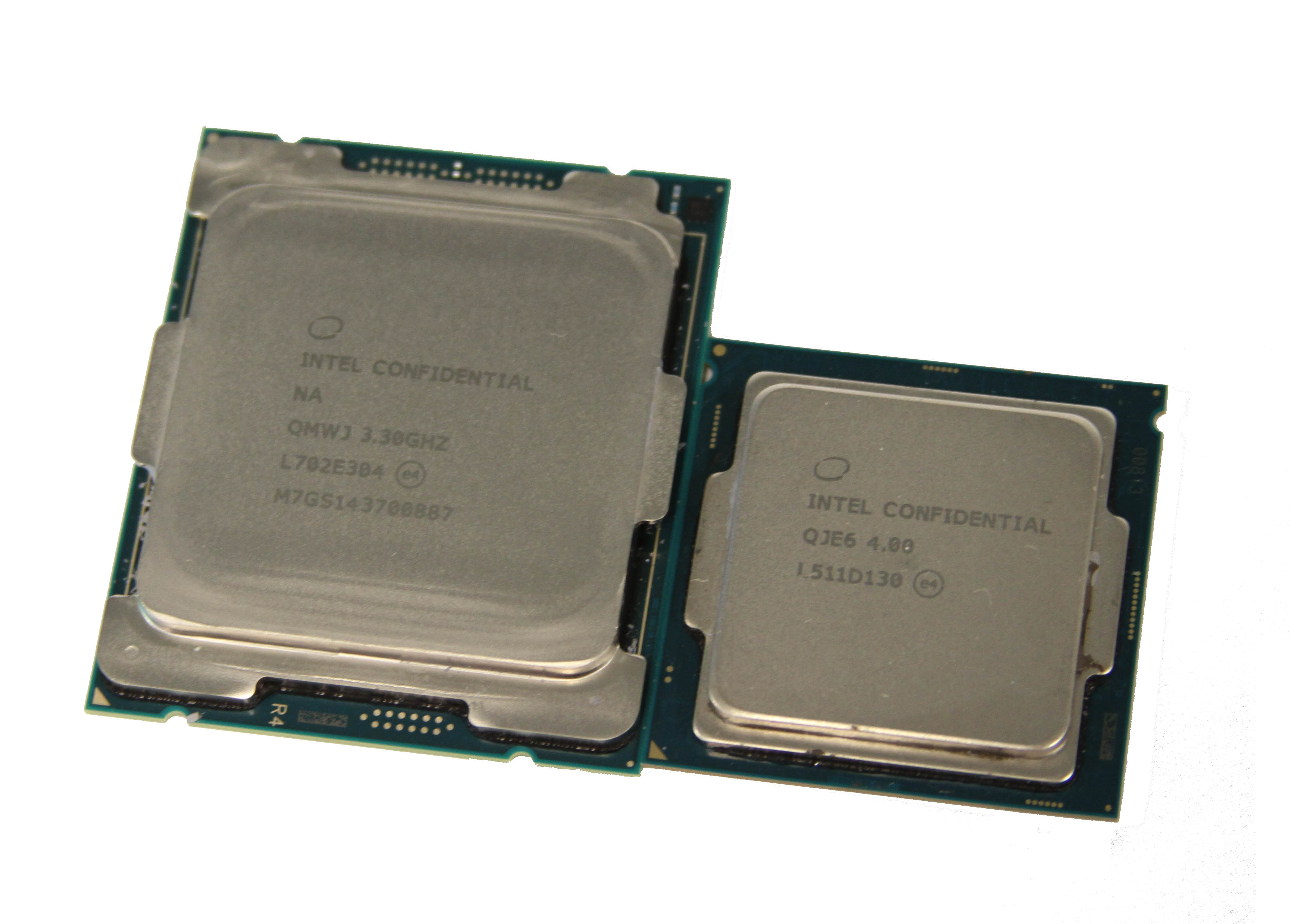 The single-threaded performance was a surprise, even after staring at that specifications table for the last couple of weeks. With a maximum Turbo clock of 4.5 GHz for single-threaded workloads, the Core i9-7900X is able to match, or nearly match, the performance of the Core i7-7700K in tests like Audacity, SYSmark Office Productivity, and CBR15 single. That’s no small feat – the 7700K is the best single-threaded processor available to consumers. Intel has actually offered what it said it would offer last year, a processor that offers little to no compromise for single or multi-threaded computing environments.

The Core i9-7900X, along with the other 8-core and below processors on this platform, will be available for preorder starting on June 19th. They will start shipping on June 26th.

I’ve said a lot about the pricing on these parts already, but after that performance summary, it seems obvious that the value of the 10-core part is better than I would have expected. At $999, it is not cheap, and AMD will still have another say in this battle in a month or so; but, if you look at the 10-core options as they stand today, Intel is moving in the right direction. A $700 price drop, along with better single and multi-threaded performance nearly across the board (1080p gaming…ugh) is hard to argue with, even in the face of competition.

In some circles of the Internet, the Core i9 release and the parts that were announced last month from Intel seem as obvious a reaction to AMD’s Ryzen processor and Threadripper as could be shown. In truth, it’s hard to see the likes of the Core i9-7900X as reactionary in its current state; Intel has clearly been planning the Skylake-X release for many months. What Ryzen did for the consumer market was bring higher 4-count core processors to prevalence, and the HEDT line from Intel has very little overlap in that regard. Threadripper having just been announced in the last 60 days (even when you take into account the rumors that have circulated), seems unable to have been the progenitor of the Core i9 line, isn't its entirety. That being said, it is absolutely true that Intel has reacted to the Ryzen and Threadripper lines with pricing and timing adjustments. Do you think it is chance that the 8-core HEDT product from Intel will be $100 more than the Ryzen 7 1800X? Of course not. And to combat Threadripper, it seems clear that Intel was willing to bring forward the release of Skylake-X, to ensure that it maintained cognitive leadership in the high-end prosumer market.

The unknown for potential buyers today surrounds the release of AMD Threadripper, with core counts as high as 16. We don’t know what the frequencies are going to be for that product though, though I think we can assume they will not be higher than what Intel can bring to bear. Remembering that Ryzen was at most equally clocked in comparison to the high-end Skylake and Kaby Lake processors, and coupled with the continued IPC advantages than Intel will have over the Zen architecture, Intel will maintain an overall performance advantage in my estimation. Where AMD could undercut Intel, if they are willing, is in that cost of that performance. Ryzen has proven to be disruptive in this regard and I expect no less from Threadripper. 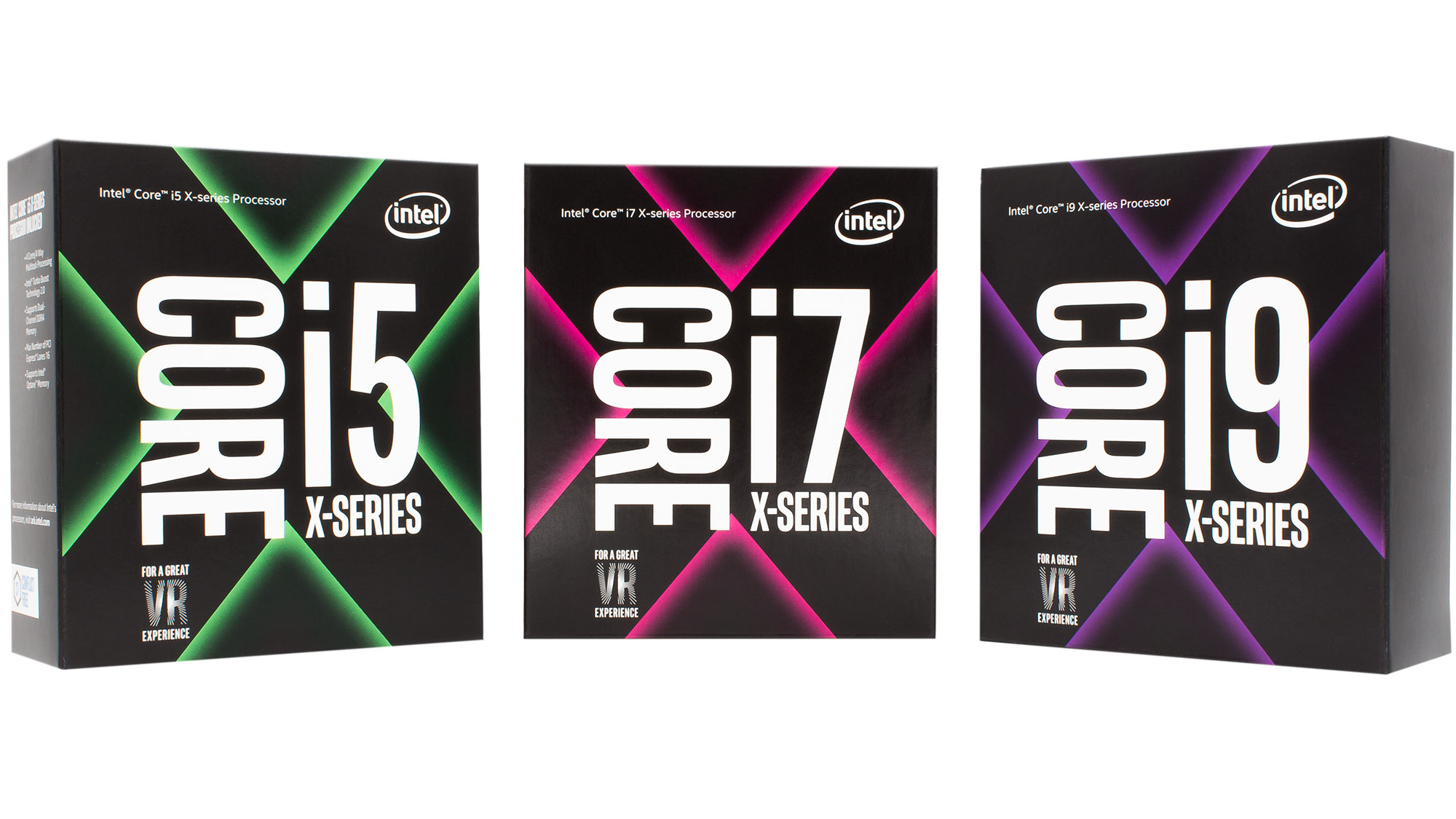 It is worth noting here that our early testing with the X299 motherboards has including troubling amounts of performance instability and questionable compatibility. Though the impact of this for Intel has been much less dramatic, it is reminiscent of the issues that were a bane to AMD at the outset of the Ryzen release. Using a couple of conversations with motherboard vendors as a source, I can say that both expressed to me that Intel was “full bore” into getting any hurdles removed, and that the updates were “more frequent and more aggressive” than what they had seen with the Ryzen platform release. My expectations are that X299 motherboards are going to be ready for use and production as you read this. Still, it shows that even Intel is not immune to the woes of new platform releases.

Though Intel brought puzzled looks when I showed them my power results, which were repeatable and verified by other reviewers and articles, it seems that the company has chosen to be ambivalent to the excessive power draw the Core i9-7900X exhibits. With matching TDP levels between both the 7900X and the 6950X, I definitely did not expect this – although it appears that Intel’s need to peak performance for the coming battle with Threadripper has precluded the company’s usual stance as a specification stickler. I don’t suppose that this will have a big impact on sales, as the buyers of $999 processors are usually more than will to sacrifice power-savings for performance.

There is no getting around the fact that the performance is impressive on the Core i-7900X. Single-threaded benchmarks and multi-threaded workloads all scale wonderfully for Intel’s new, current flagship CPU. There are a couple of hurdles that stand out, including our 1080p gaming results that bare resemblance to the Ryzen 7 1800X situation from earlier this year, but to a lesser degree. Still, if you were looking to nit-pick on the architecture or implementation for Skylake-X, the move to the mesh interconnect that leads to longer L3/LLC latencies would be the target.

That being said, if you want to own the fastest consumer processor on the planet, the Core i9-7900X is it. Until July. Or August. Or October…