As we start to dive into the performance of the card itself, I like to get a better understanding of the behavior of the product itself. For GPUs this means looking at the reported clock speeds, and how stable they appear to be over time. I turn to a long run of Unigine Heaven benchmark for this. 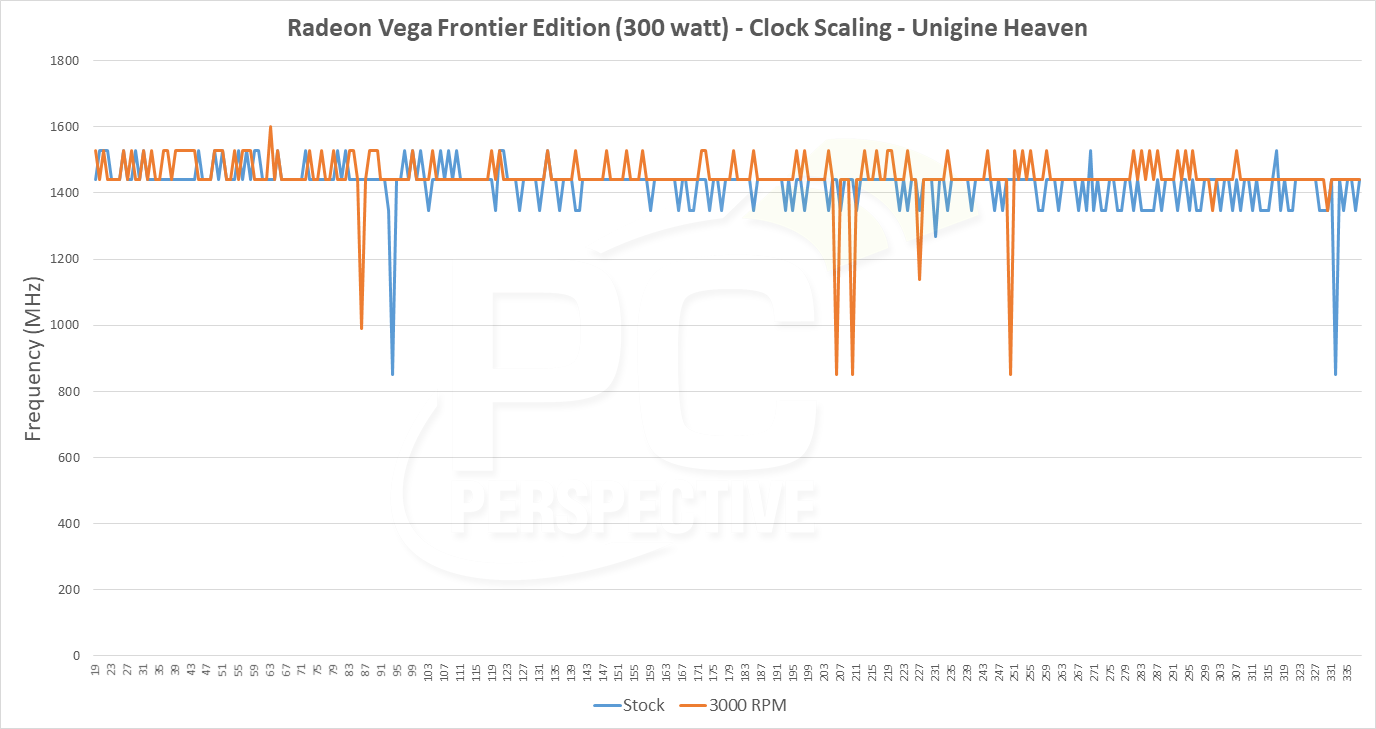 In general, the clock speeds on the Vega Frontier Edition appear to hover around the 1440 MHz mark, well under the 1600 MHz rated clock speed of the card from specifications. The jumps hit inside the 1300 and 1500 MHz marks though the granularity of the shifts are quite large, indicating that maybe the boost/turbo capability of the Vega architecture remains more limited than what we see on the GeForce side of things.

I also ran a test with the fan speed cranked up to 3000 RPM or so, fixed, to see how keeping the GPU cooler would affect the ability for the card to hit higher clock speeds. As you can see, while the higher fan speed produced one fewer step down into the 1300 MHz range, we did NOT see it go any higher than the 1528 MHz peaks you see in both results.

Compared to previous generations of hardware from AMD, the Vega FE is running at impressive clock speeds. The Radeon Fury X was only able to top out at the 1050 MHz (reference) with the same stream processor count. (Note however than the compute units are different from Fiji to Vega.) Even the Polaris GPUs used on the RX 580 were topping out at 1340 MHz for reference speeds.

With a rated TDP of 300 watts, we had a lot of questions about the power consumption of the Radeon Vega Frontier Edition. Based on our direct power consumption measurement (not at the wall), we are able to get precise numbers. 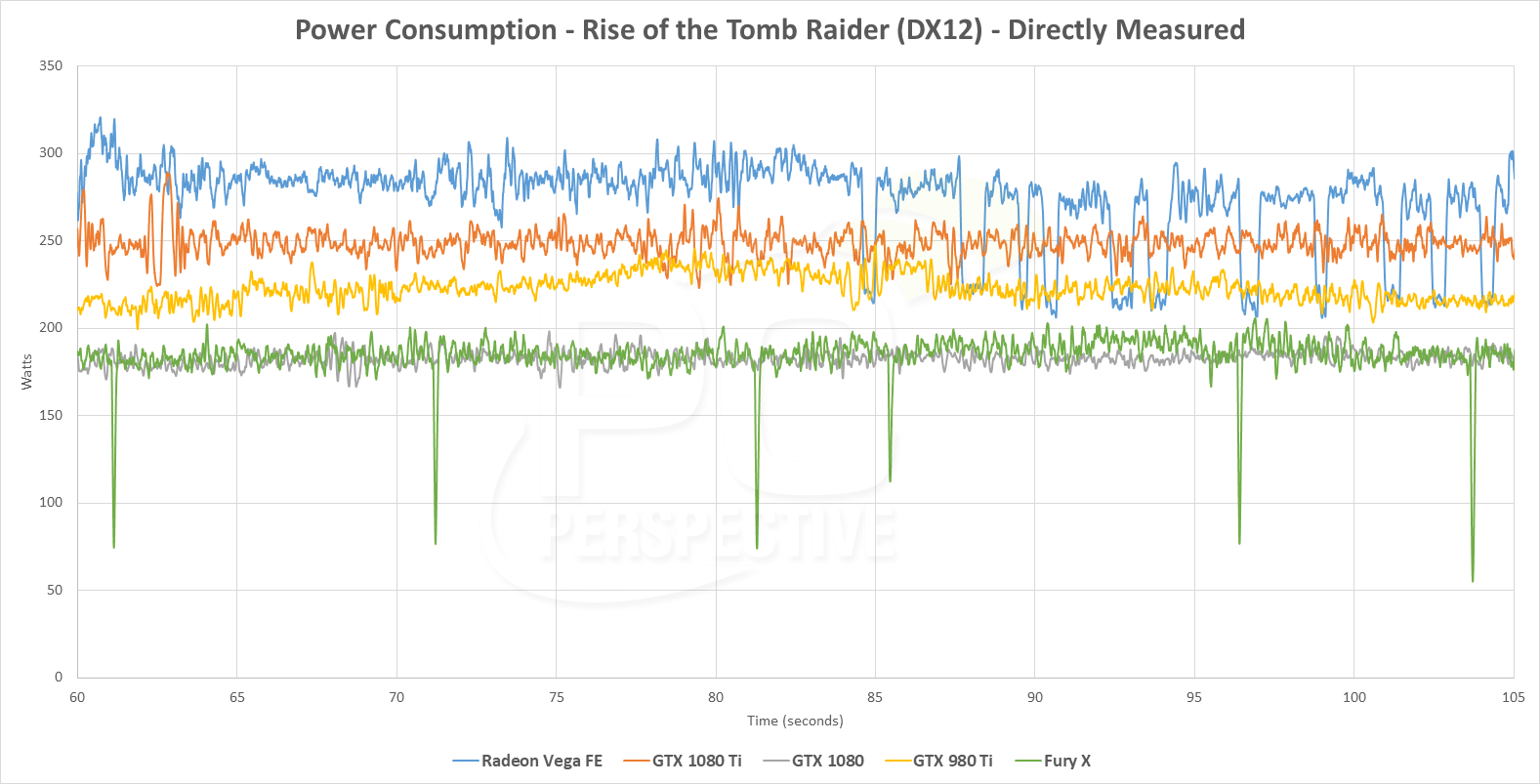 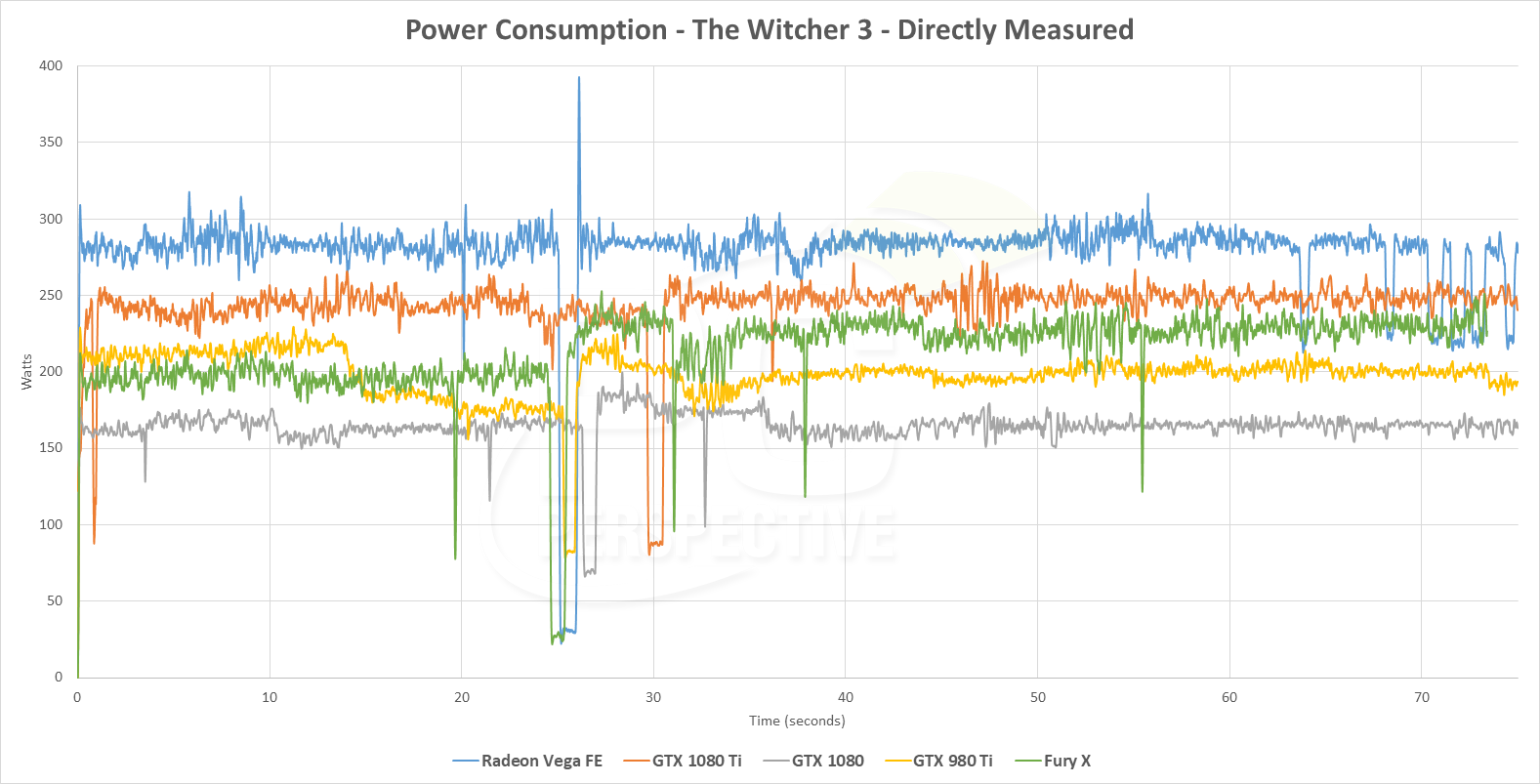 In general, the power draw of the Vega FE is under the 300-watt level, which is good. After the issues that haunted the Radeon RX 480 at its launch (drawing well over the 150 watts rated TDP), AMD has learned its lesson it appears. Power draw from the PCIe connection on the motherboard stayed very low actually (near 25 watts) with the vast majority of the power coming from the dual 8-pin power connections on the card. For reference, that power draw of 300 watts is 50 watts higher than the GeForce GTX 1080 Ti and the Titan Xp but 120 watts higher than the GeForce GTX 1080.

We did find one odd behavior with the power draw on the Radeon Vega FE card that showed itself when the GPU got up to a peak temperature of 85C – power draw would dip to a lower level. And when I say level, I mean exactly that: the card appears to shift into a lower power draw state for varying amounts of time as it attempts to regulate the temperature of the GPU. Look at the latter part of the RoTR power results above – the blue line of the Vega FE power consumption clearly has a back and forth step to it. 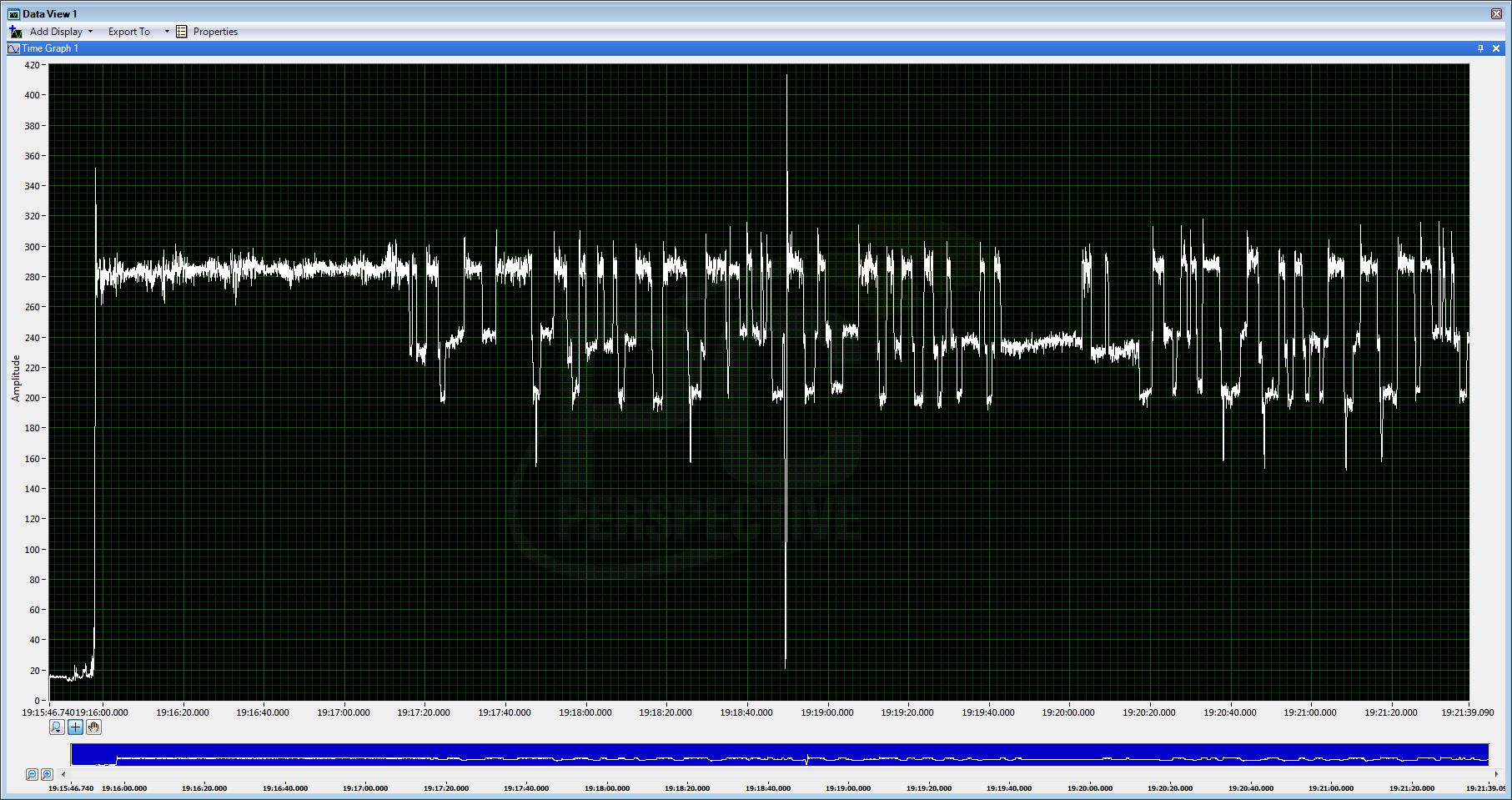 In our power testing with Metro: Last Light at 4K you can clearly see two different steppings below the “nominal” power draw level of 280+ watts. At 240 watts and 200 watts, the card was pulling less power, but interestingly, did NOT appear to drop the clock speeds during those intervals. That seems counter-intuitive to be sure, and we are still asking questions of AMD to figure out what is going on. This behavior was repeatable through multiple runs and through different games – we saw it in both Witcher 3 and Rise of the Tomb Raider. 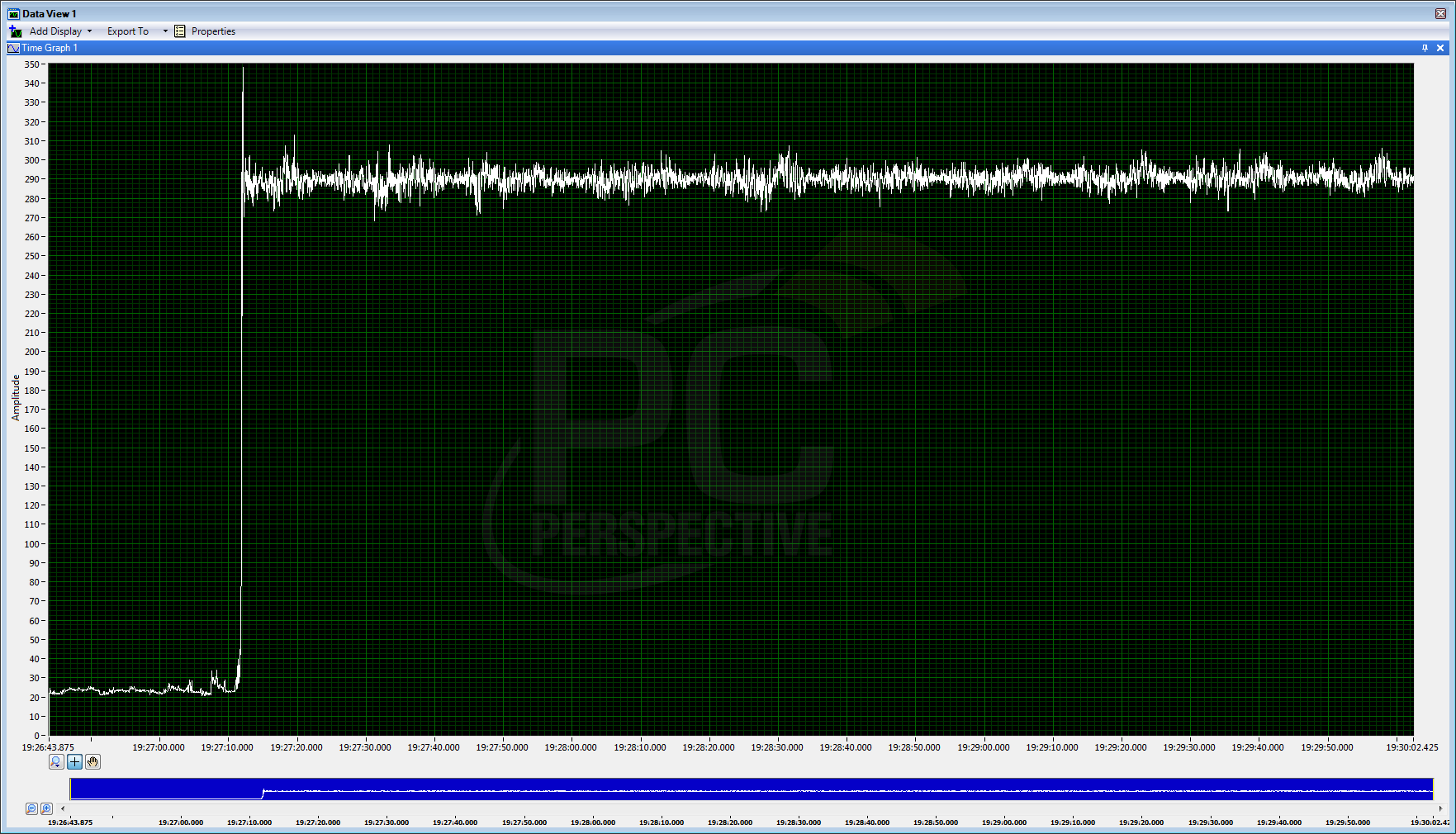 We ran a quick experiment to make sure it was thermals we were dealing with. By cranking the GPU fan up to 100% (which is quite loud) we could play Metro: Last Light at 4K without seeing the power draw drops. The GPU temperature never breached 56C during that testing run so it is likely we could lower the GPU fan speed to something more reasonable on our ears while still keeping the card out of that 85C range that appears to cause the power draw throttling. I am hoping that AMD takes heed of this and manages the fan curves differently with the RX Vega product line.