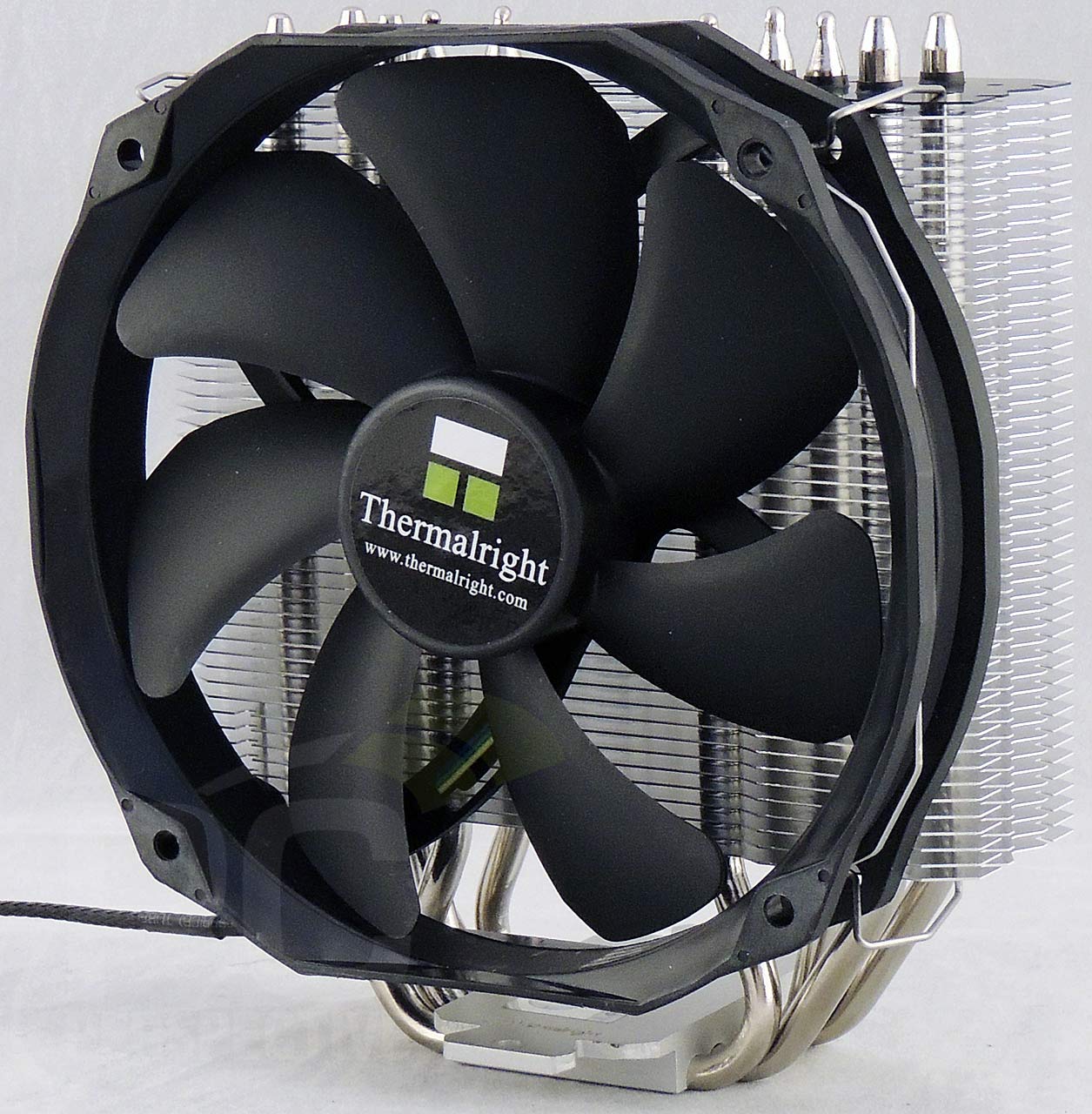 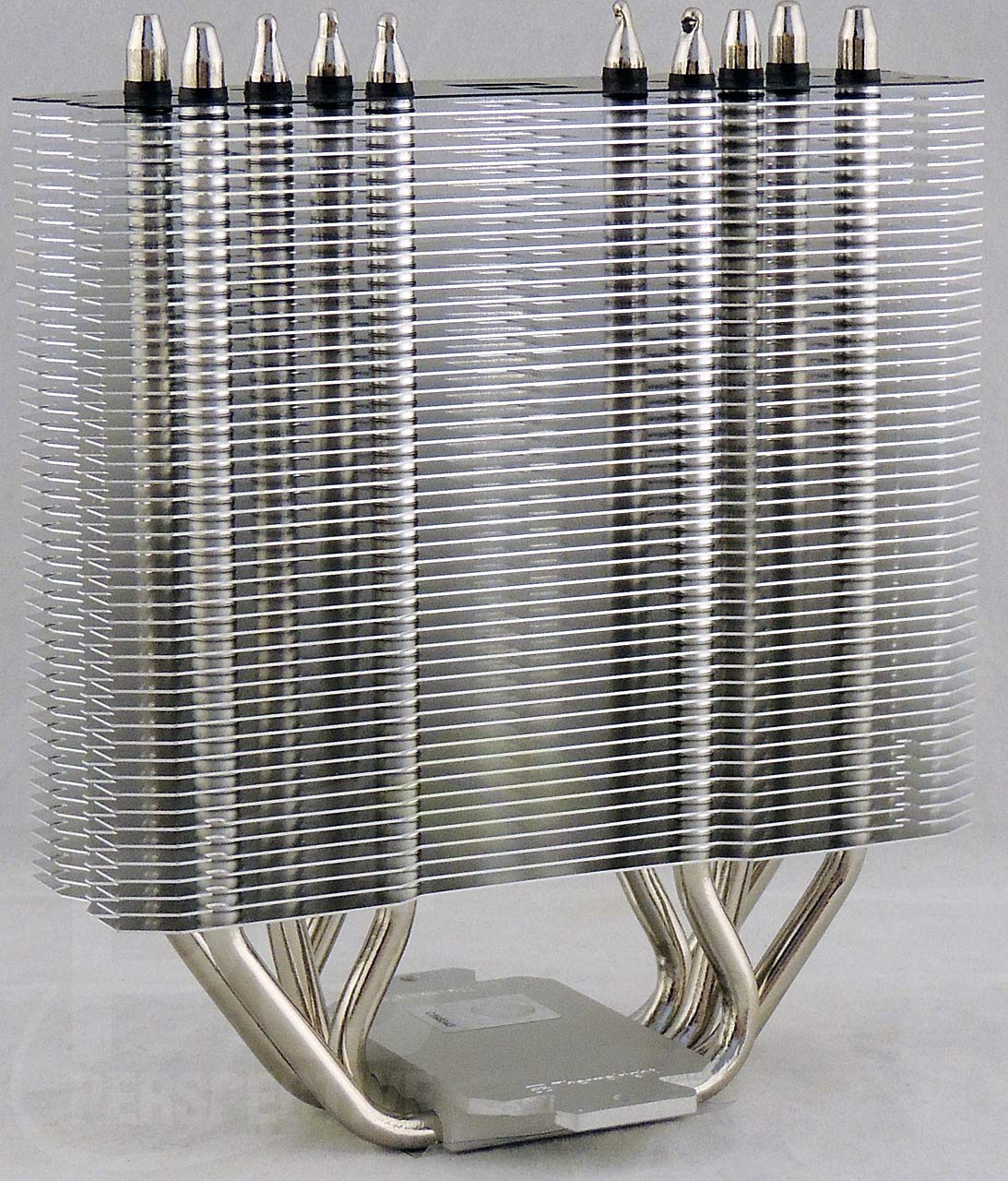 The Thermalright TRUE Spirit 140 Direct CPU cooler is a single tower, dual metal design with five 6mm heat pipes for heat transfer. The heat pipes are constructed of nickel-plated copper to optimize heat absorption from the CPU and transfer to the aluminum radiator fins for dispersal. The nickel plating also gives the copper pipes protection form the elements, preventing the copper from oxidizing. The cooler supports dual fans in a push-pull configuration, but comes standard with a single 140mm fan. 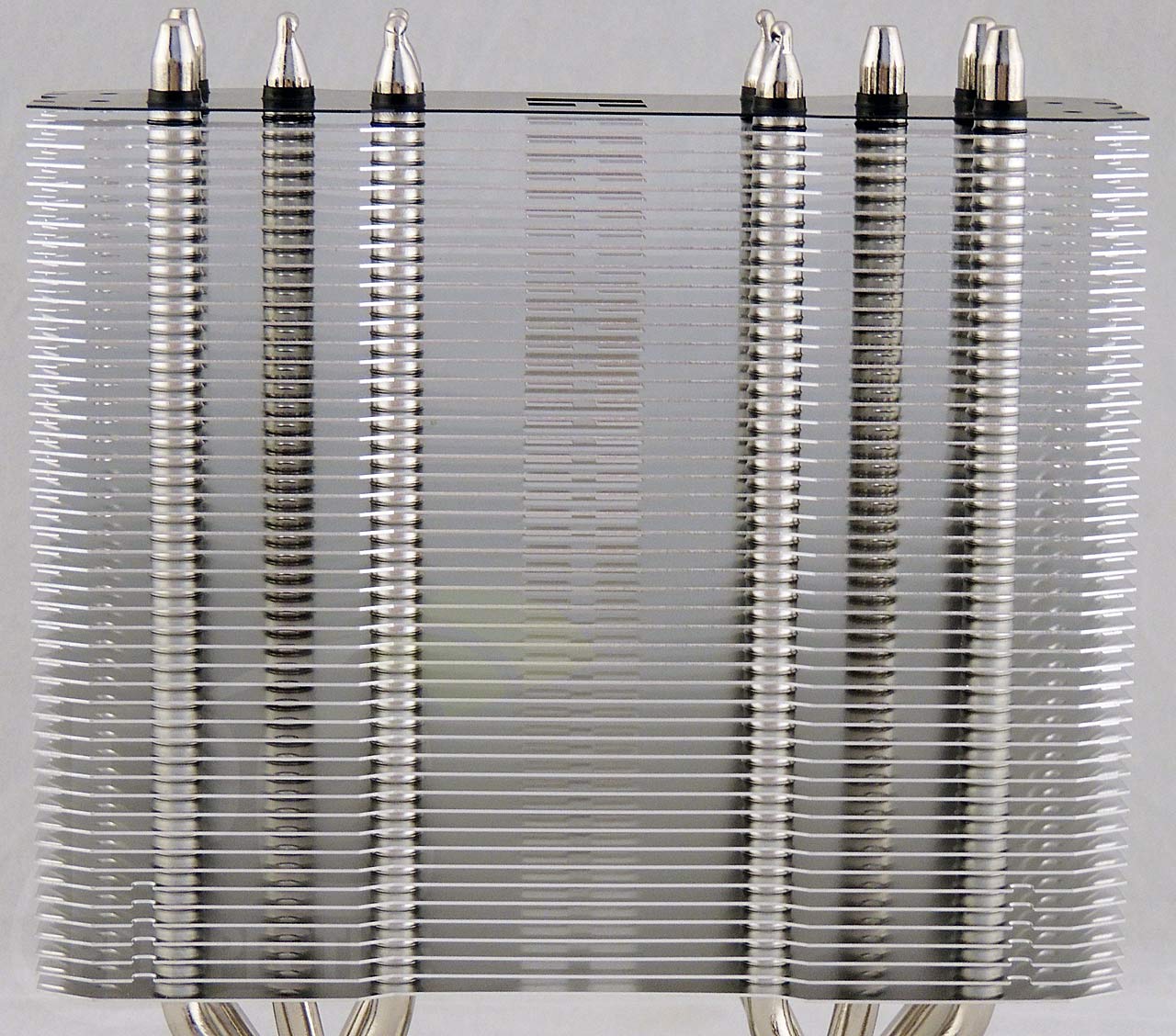 Thermalright designed the rectangular radiator with an 11 fpi (fins per inch) density, maximizing the airflow potential through the tower while minimizing fan power needed for effect air traversal. The fins are bonded to the heat pipes on each level, giving the structure added stability and rigidity, as well as ensuring a solid hand-off medium between the two structures. Heat passes from the CPU into the center of the heat pipes and then travels up each side of the U-structure to be passed to the aluminum radiator and dispersed via the air flowing through the tower. The CPU contact plate is a solid aluminum part with the heat pipes pressed into it for a snug fit. On either side of the base plate are mount holes for securing the base plate to the CPU. The five heat pipes are aligned in two sets of five along both sides of the base plate with in an X configuration – two along either side and one in the middle. This ensures that heat is evenly distributed along the entire plane of the radiator's aluminum fin "levels". 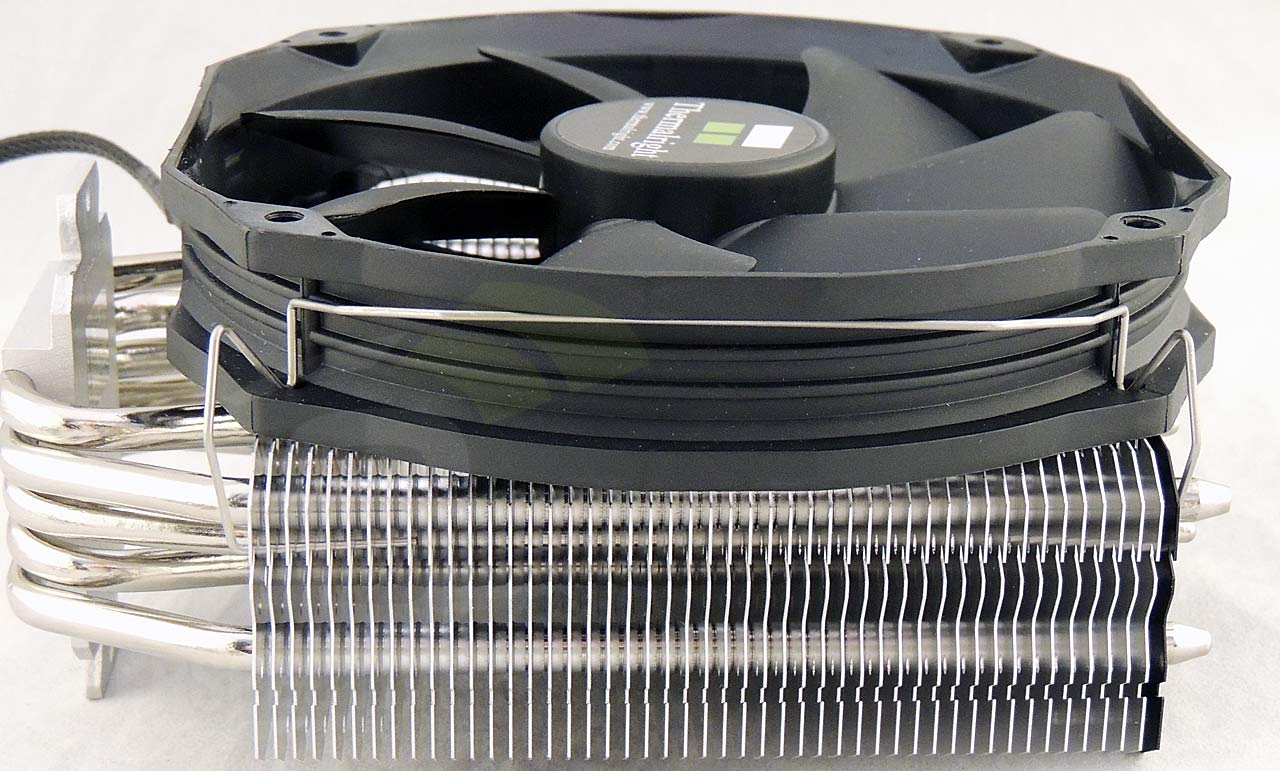 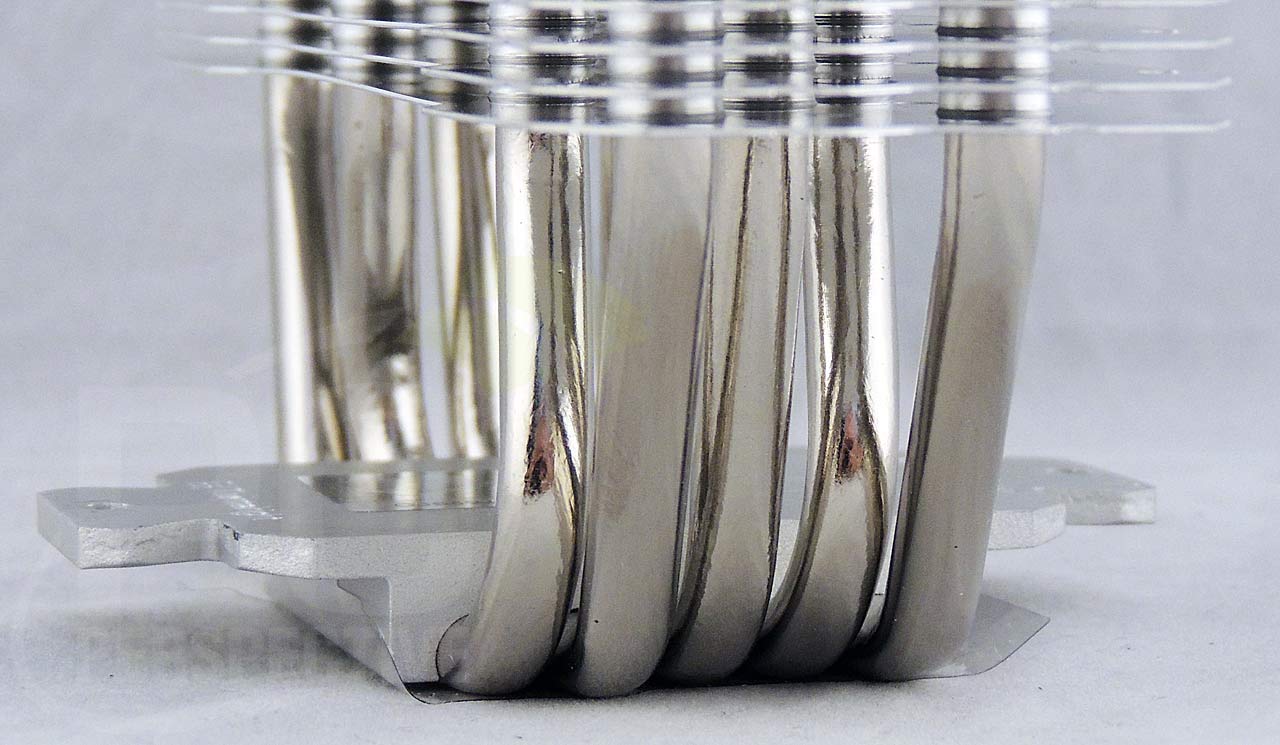 From the side view, you can more easily see the minimal width of the radiator tower, barely thicker than 2x that of a normal fan's width. The fan sits over the base plate's mount holes when mounted to the radiator, requiring removal and reattachment when trying to mount or remove the cooler from the motherboard. The side view also gives a better visual of the heat pipe layout coming from the base plate into the radiator tower.

The top-down view of the cooler gives a further look at the X-type arrangement of the heat pipes along both sides of the radiator. Both ends of the heat pipes are sealed, capped, and bonded to the radiator's top plate. Note that the top plate is a black non-metallic layer. Also, Thermalright chose to put a cutout of their corporate logo in the exact center of the cooler, going through all layers for an interesting effect. 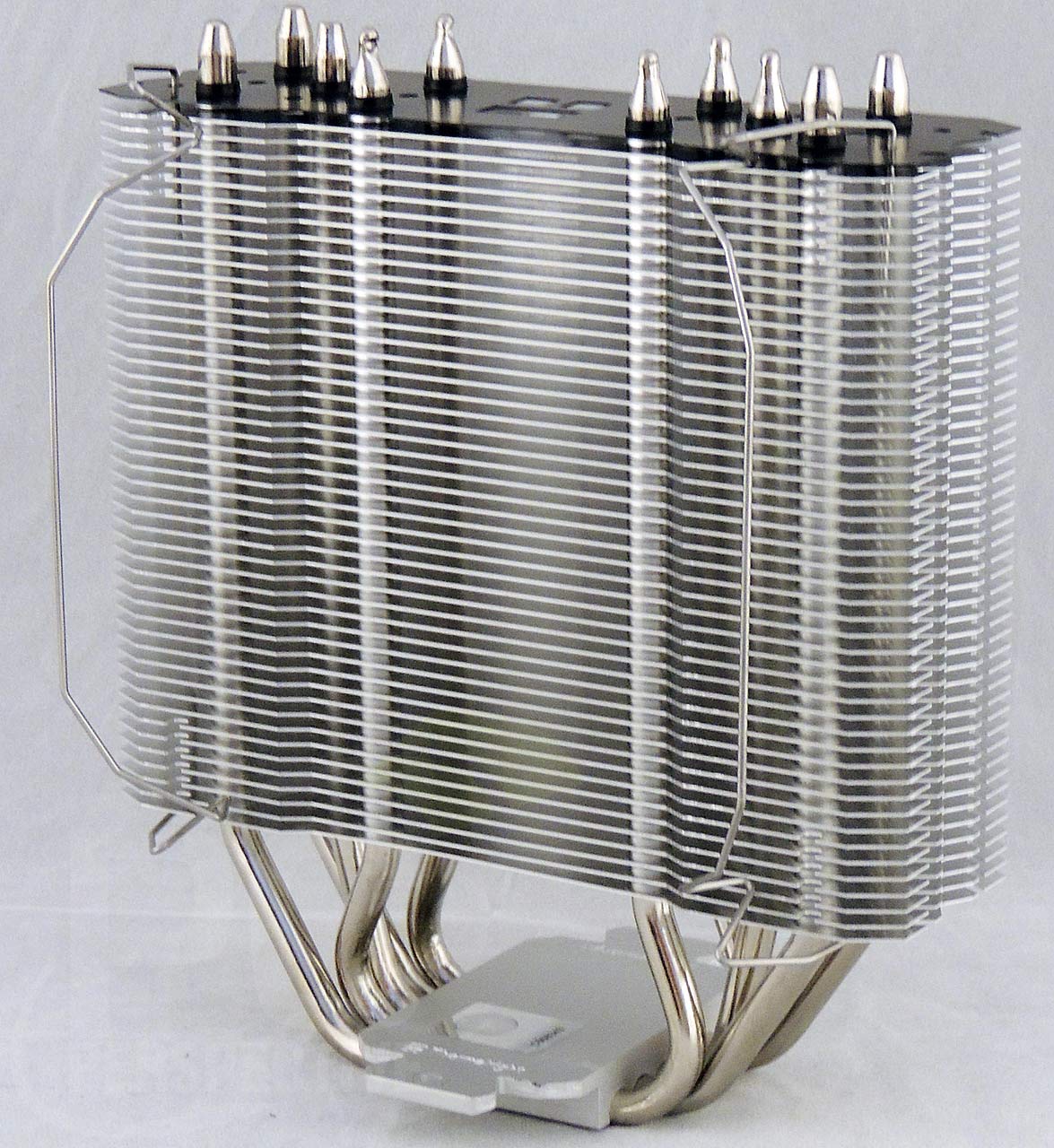 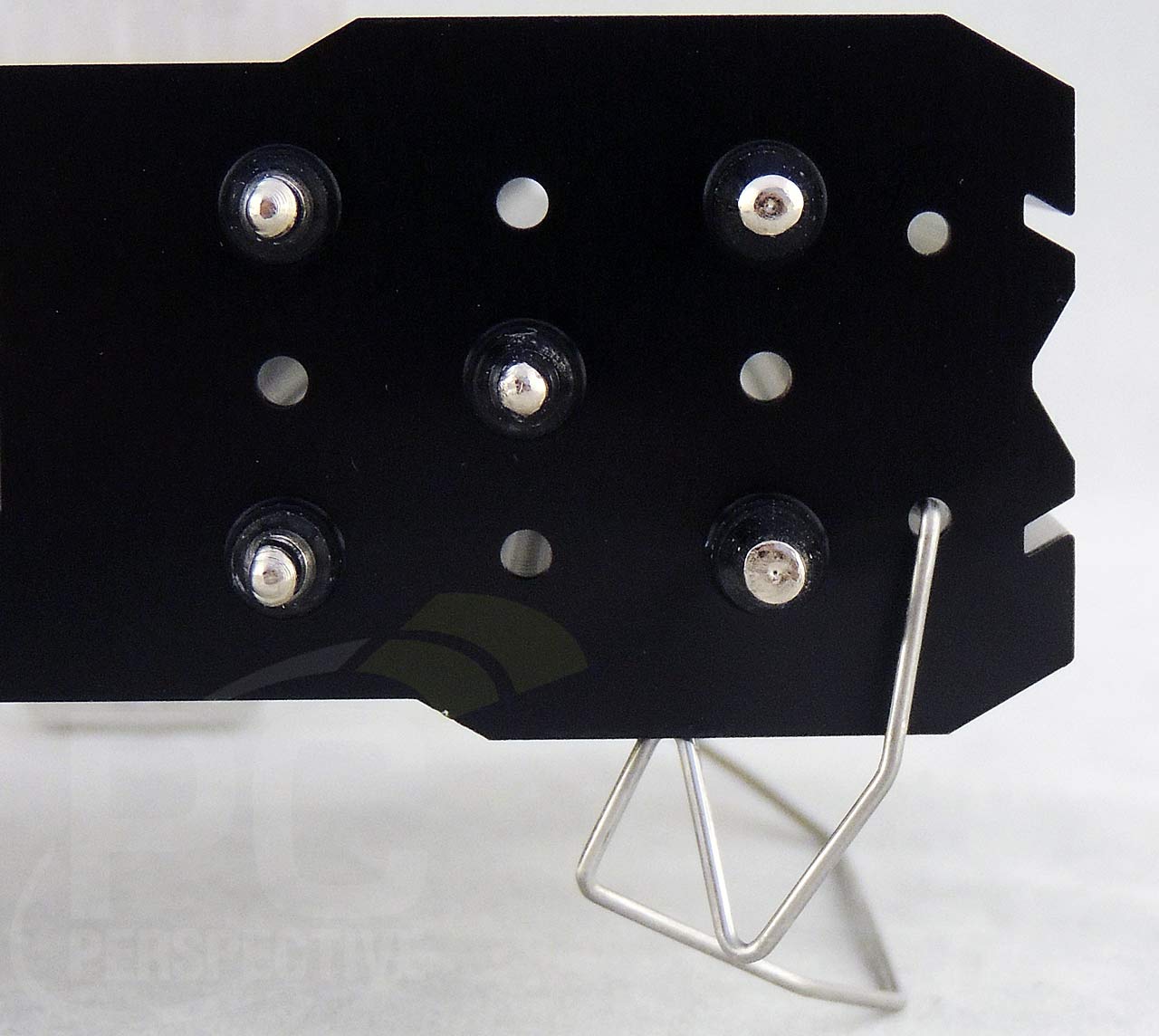 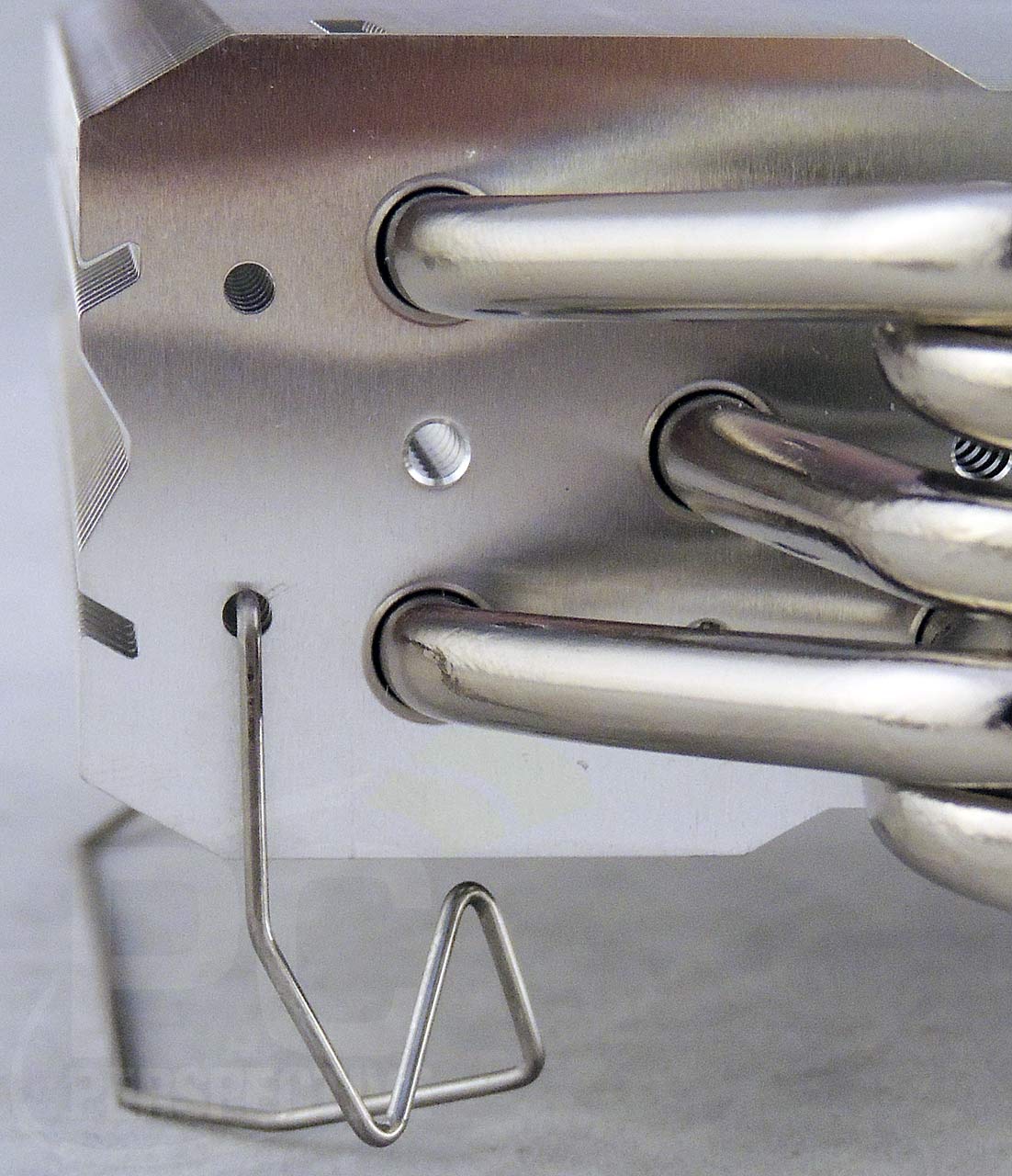 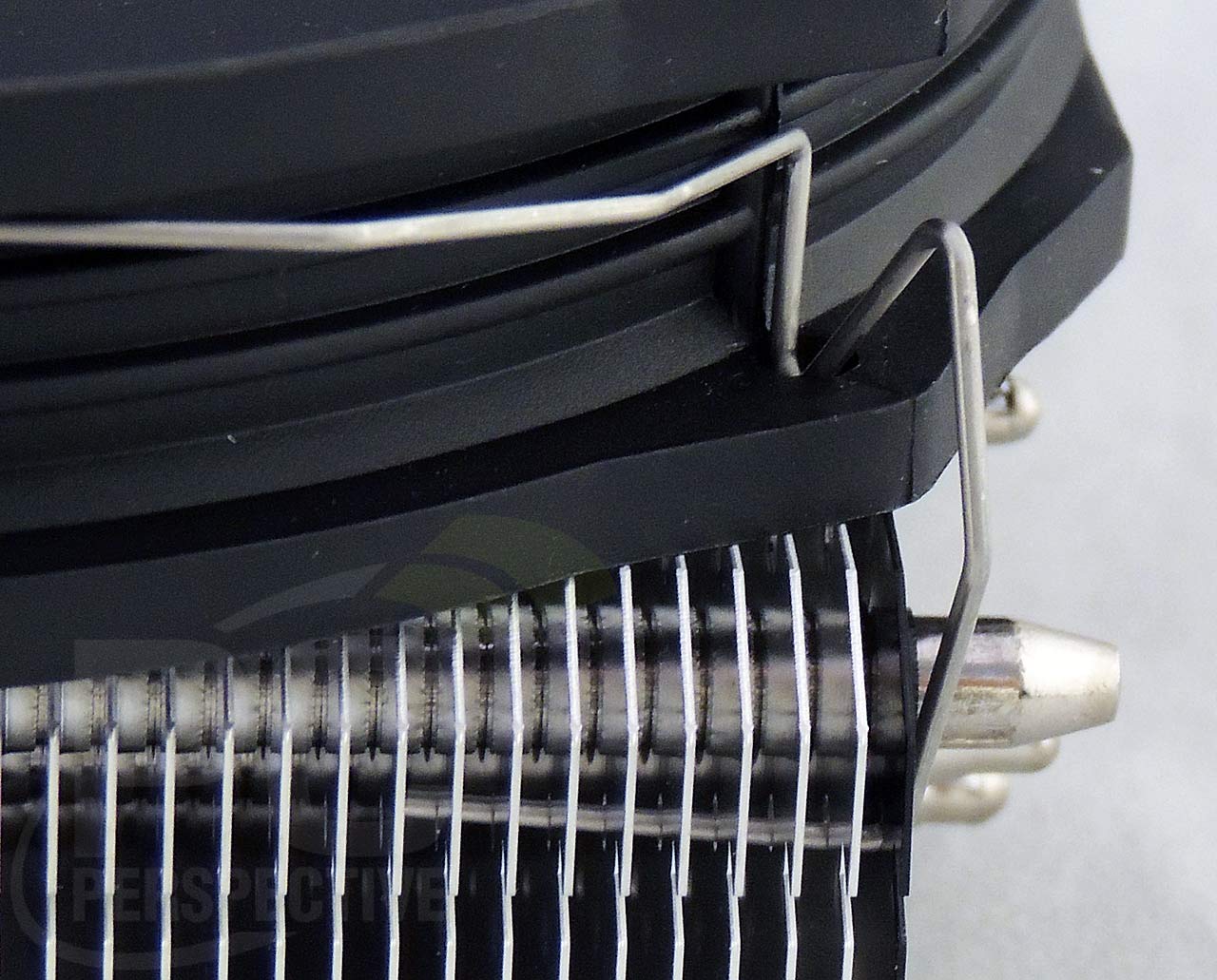 Thermalright's fan mounts are a bit different then I've seen on other coolers, but seem to be more secure and less invasive to the radiator structure. The fan mounts fit into holes through the radiator along the front and back left/right edges, using the radiator's structure for support. The fans then snap into the mounts with triangular sections fitting into the fan mount holes. The fans mounts are formed to fit around the inside of the fan housing for a snug fit between the fan and the mount to hold it securely against the radiator. 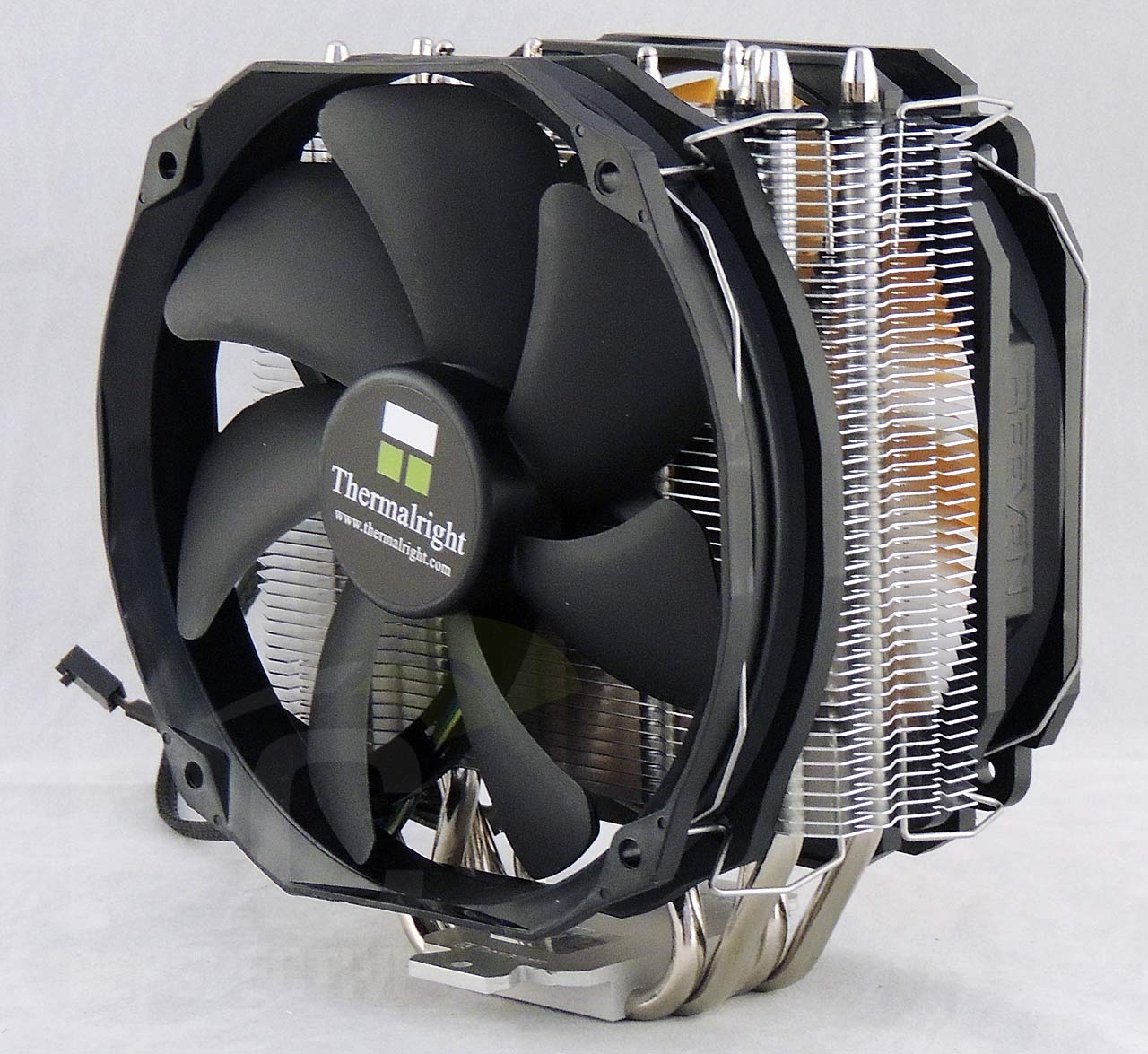 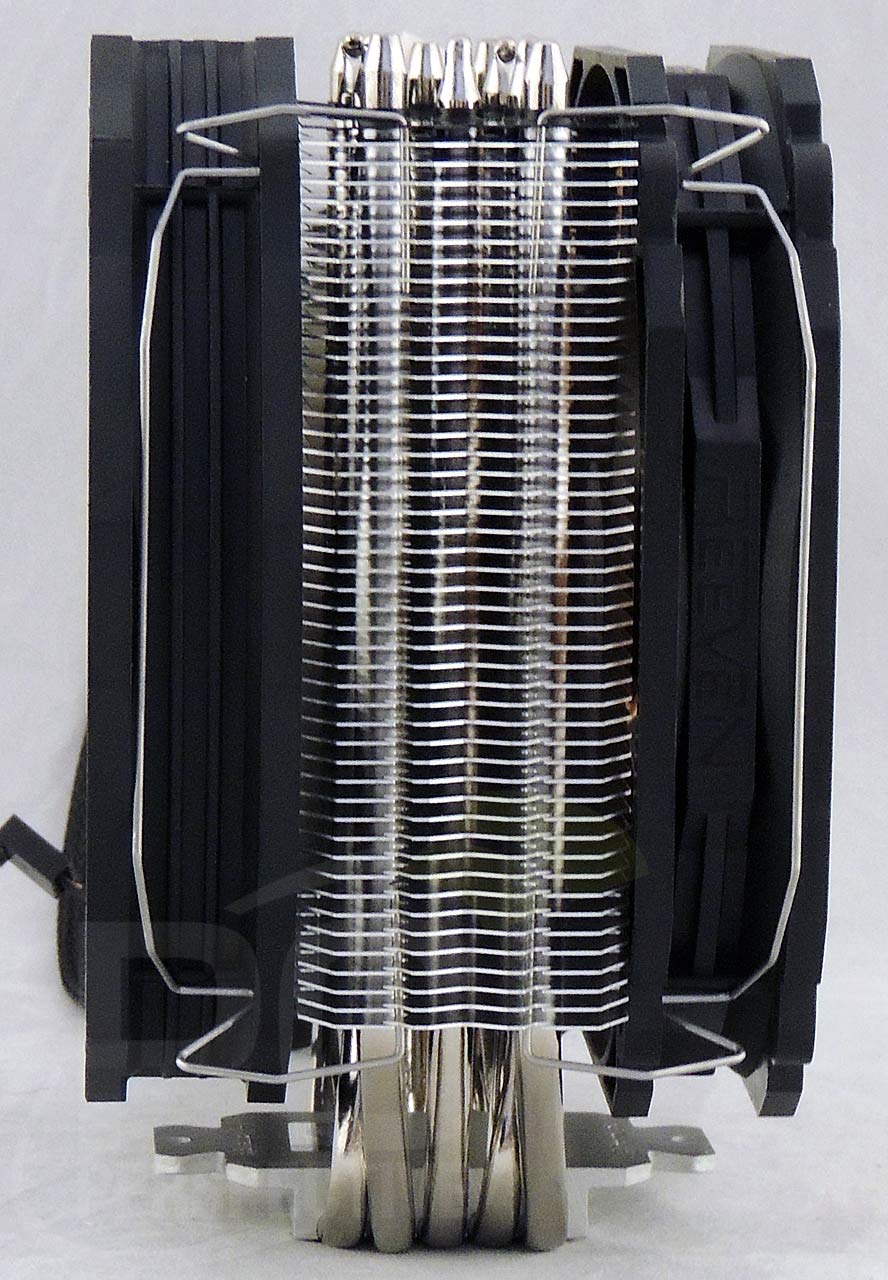 The cooler easily accommodates dual fan mounting with fan mount holes provided to accommodate fan's on both sides of the radiator tower. 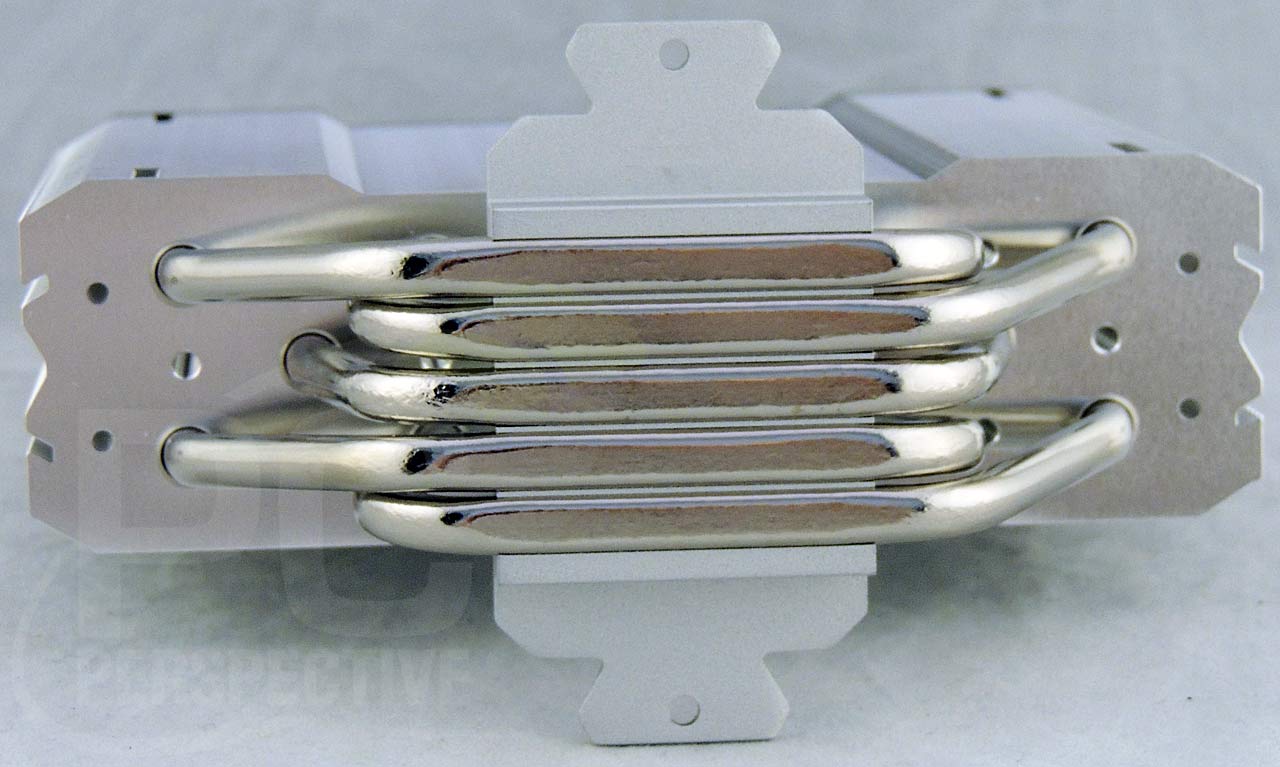 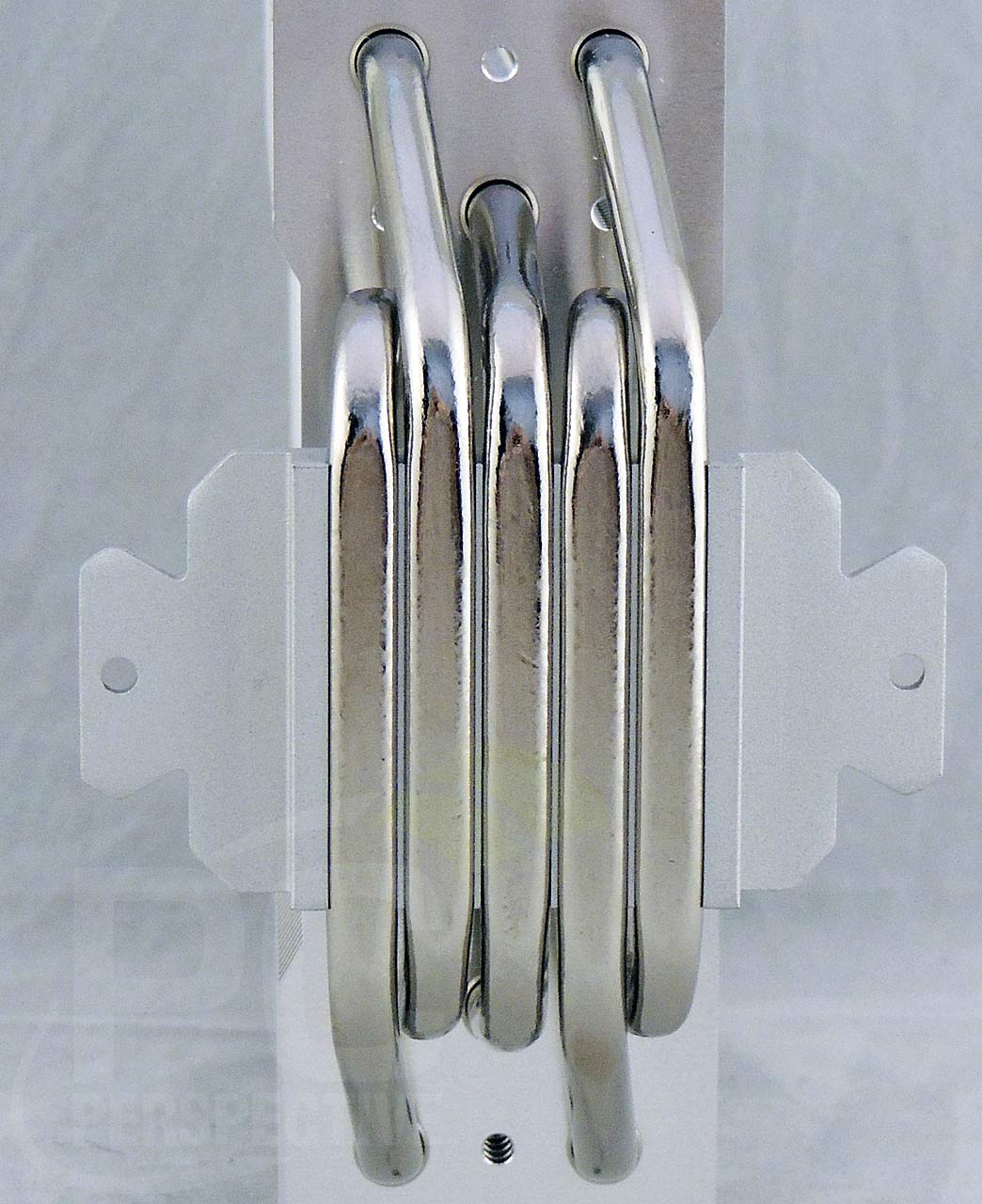 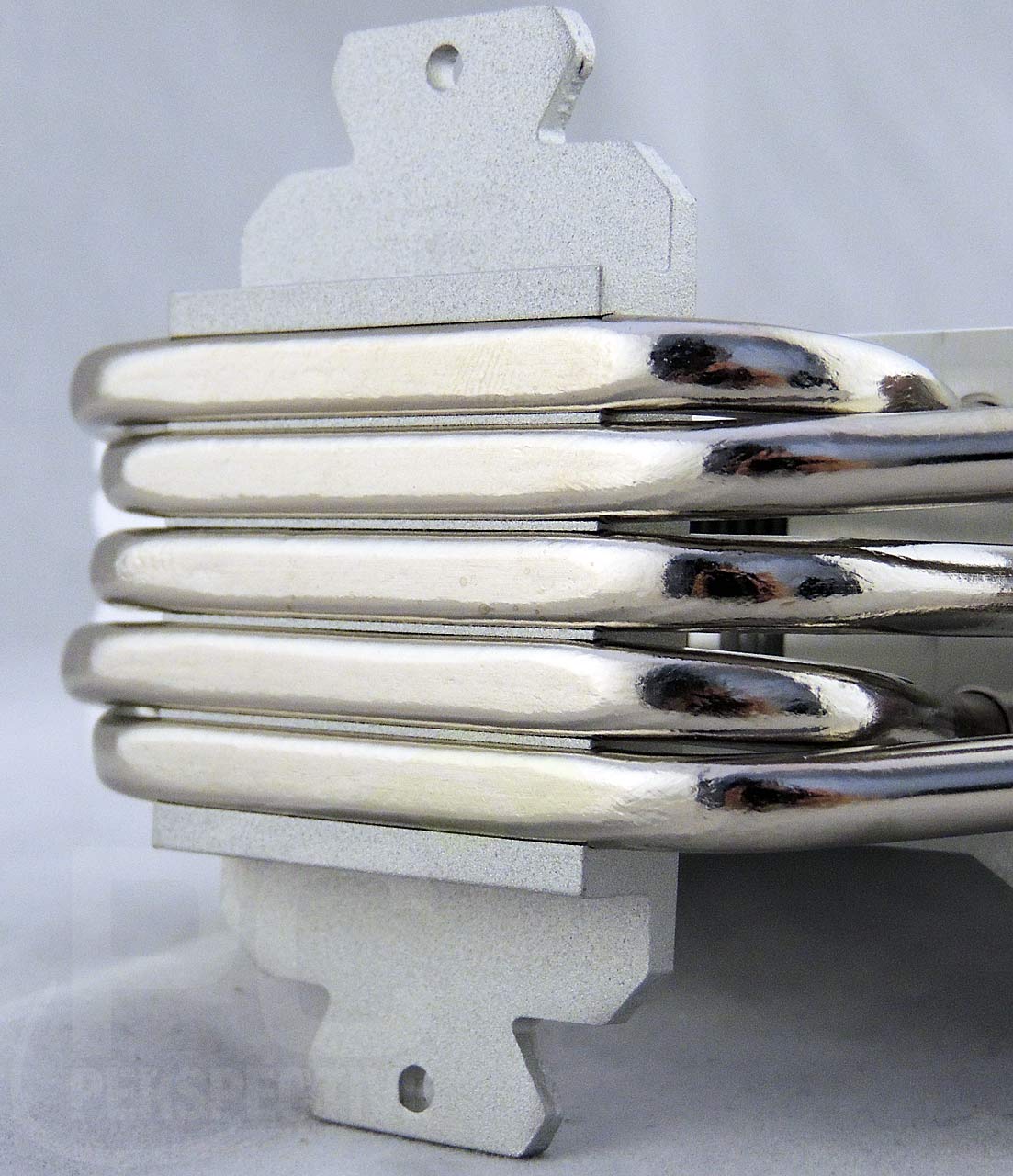 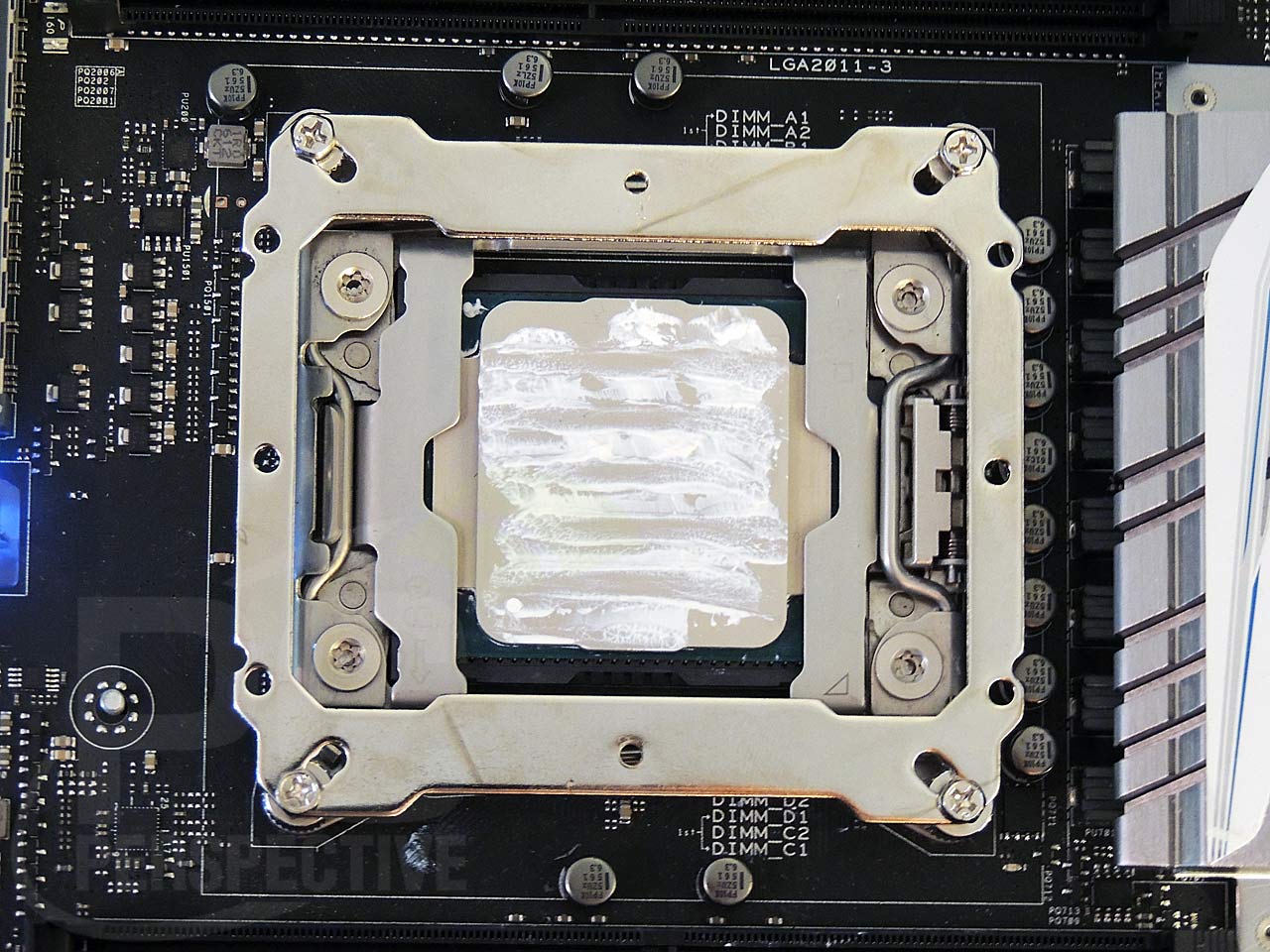 The contact area for the CPU consists of the bare heat pipes press-fit into the base plate, flattened and sanded smoother for a uniform contact area. There are gaps between the heat pipes, but the surface formed by the flattened heat pipes was flattened evenly in the manufacturing process to ensure uniform contact with the CPU surface. This is further proven by the uniform thermal paste spread shown on the CPU. If there was any variation in height between the heat pipes, there would be major gaps in the paste spread pattern. However, care must be taken on spreading the thermal paste along the bottom of the cooler to ensure good contact. 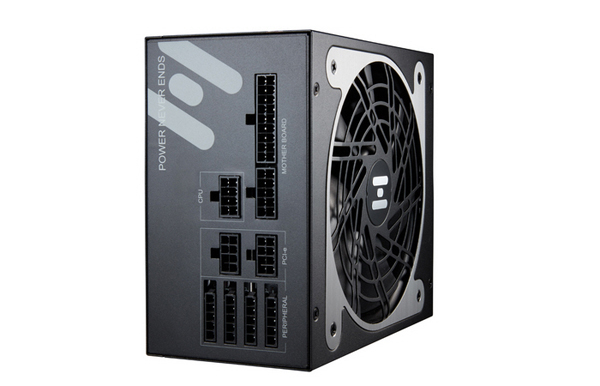 The current King of the Coolers 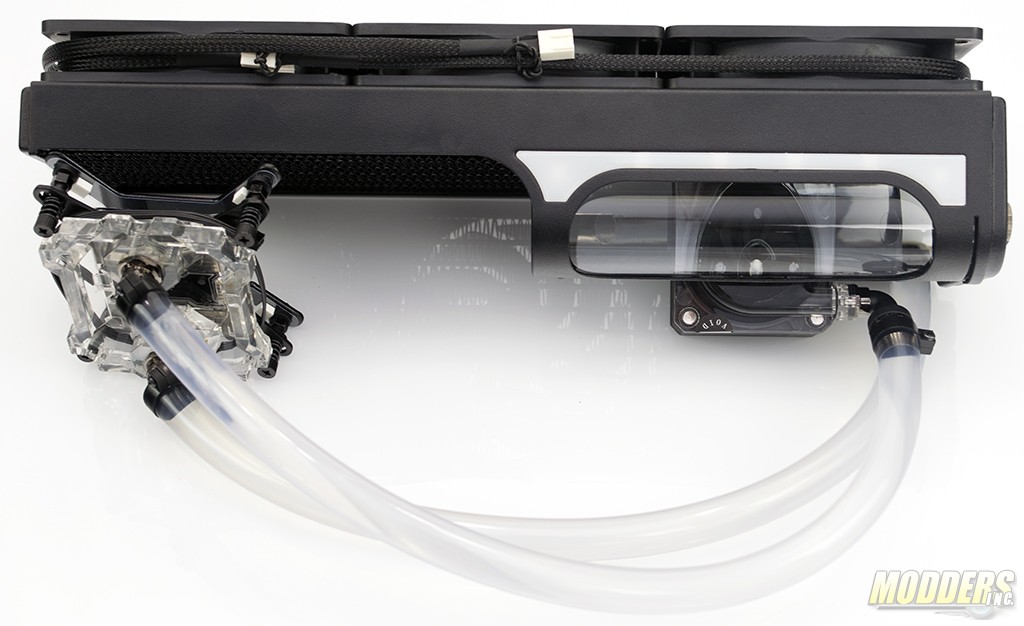