At SIGGRAPH in Los Angeles this week, AMD released even more details about the its upcoming Ryzen Threadripper product family ahead of its retail release in August. Though readers of PC Perspective are already well aware of the Threadripper 1950X and 1920X CPUs that were announced just a couple of weeks back, along with prices, clock speeds, performance estimates, and more. At tonight’s Capsaicin event, we learned about the on-sale, preorder date, and even a surprise new SKU option.

Let’s not bury the lead here: the Ryzen Threadripper 1900X is the third entrant into the Threadripper family and will consist of 8-cores, 16-threads, a base clock of 3.8 GHz and a Turbo clock of 4.0 GHz, while still supporting XFR for as much as 200 MHz of additional clock speed. It will still have 64 lanes of PCI Express, four channels of DDR4 memory support, and will come with a price tag of $549. 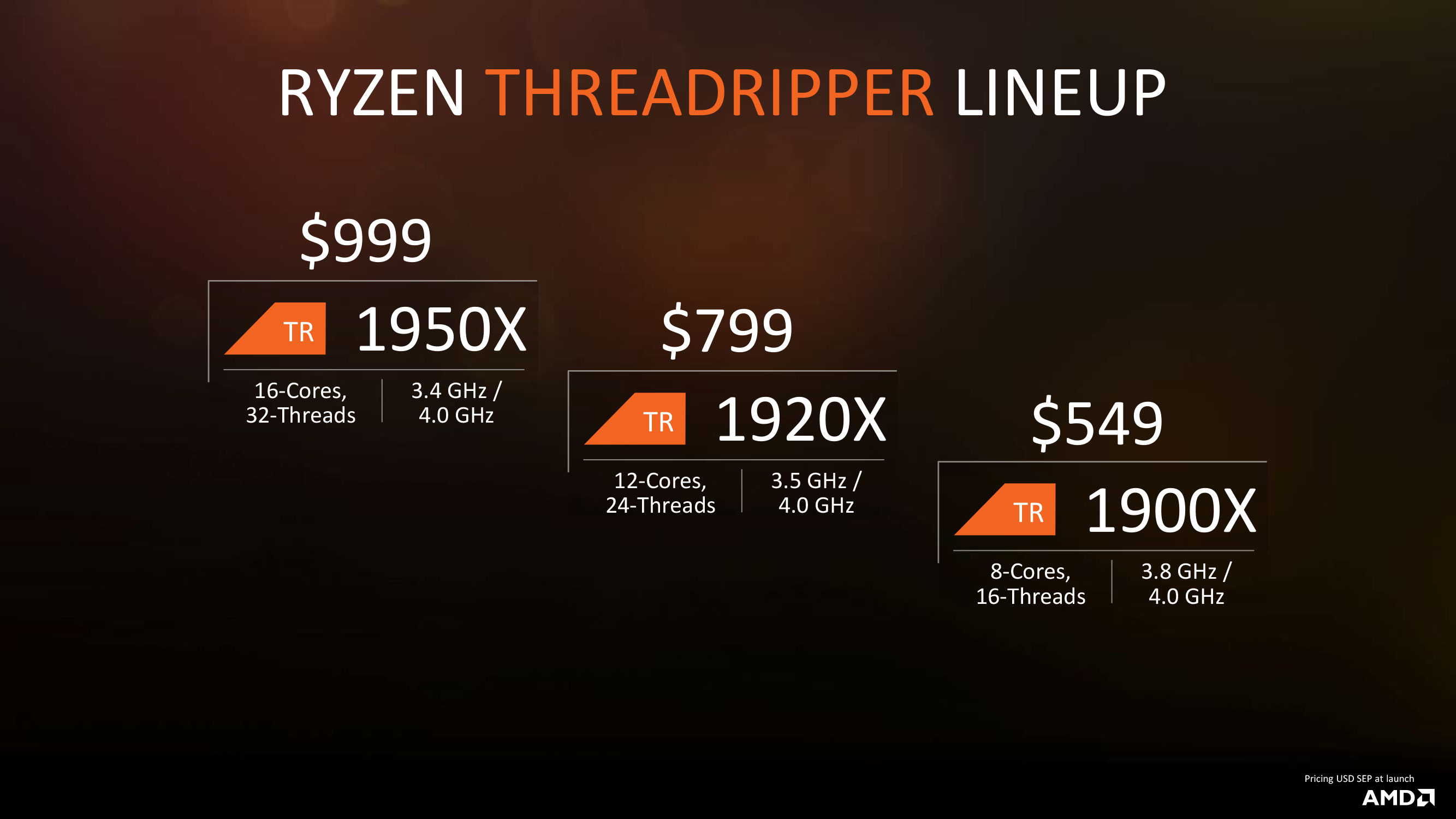 The 1900X becomes a very interesting part for a number of reasons. Its price puts it between the Core i7-7820X and the 7800X (8-core and 6-core parts from Intel’s Skylake-X family). Even with a base clock speed of 3.8 GHz it will find itself slower than the 7820X due to lower IPC and similar clock rates. However, AMD is counting on the appeal of 64 lanes of PCIe, countering the 28 lanes on the 7820X from Intel, along with a slight cost advantage, to help it shine. The 1900X will have the same core and thread count as the Ryzen 7 family, though at higher clock speeds, a higher TDP and double the DDR4 memory channels and more than 2x the PCIe lanes. For just $50-100 more, the 1900X is a compelling option against the 1800X if you are a connectivity, storage, or multi-GPU junkie. 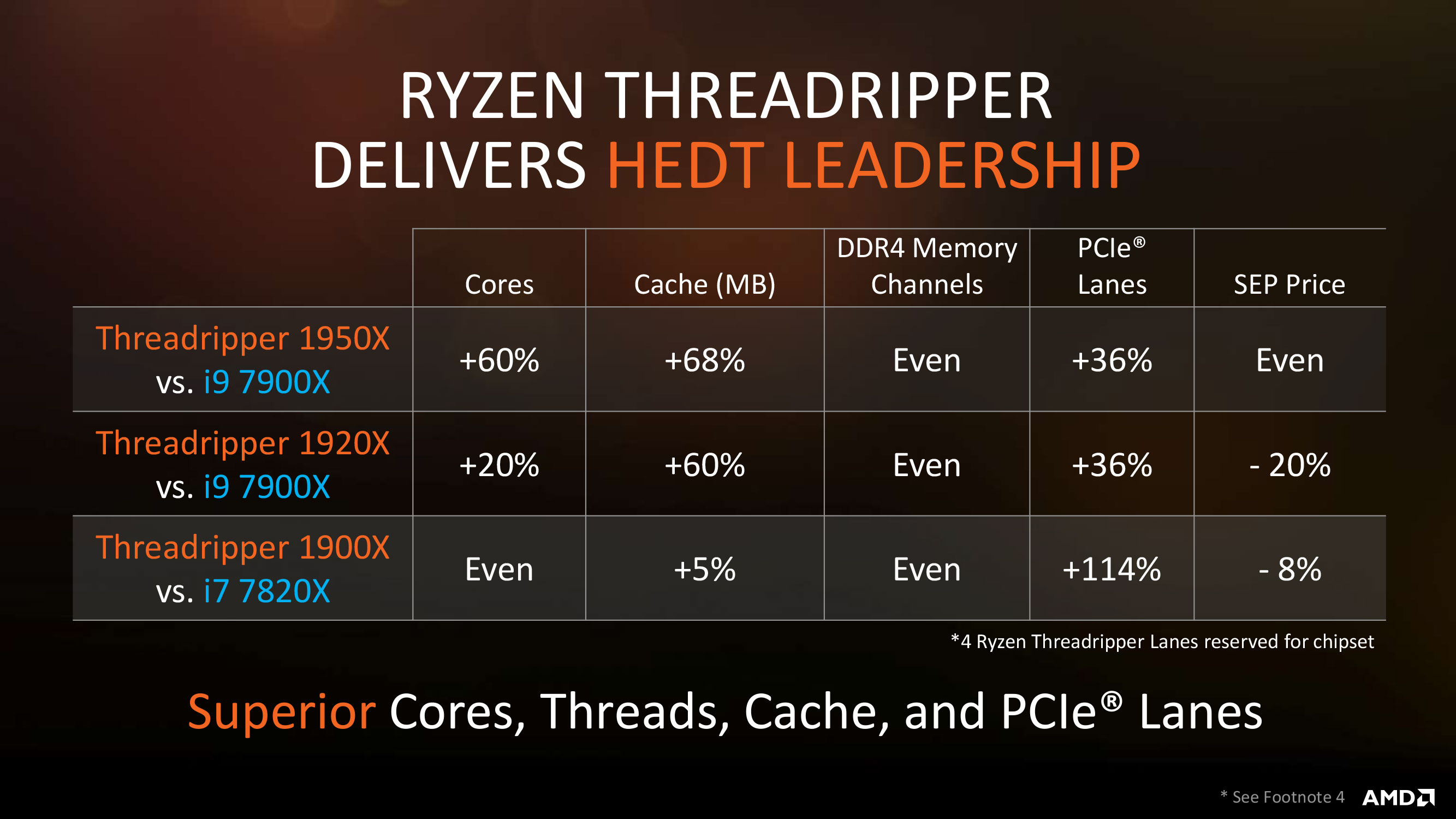 With these three processors in place, AMD is confident that its family will be able to compete with the Intel HEDT products with several advantages. The 1950X has a significant core/thread, cache, and PCIe advantage over the 7900X, the current highest end part from the Skylake-X family. Even the 1920X has more cores, more cache, and more PCIe lanes, though it will be much closer in performance for 20% lower consumer cost. Finally, the 1900X shares a core count with the 7820X but has 114% more PCI Express lanes at a price that is 8% lower. 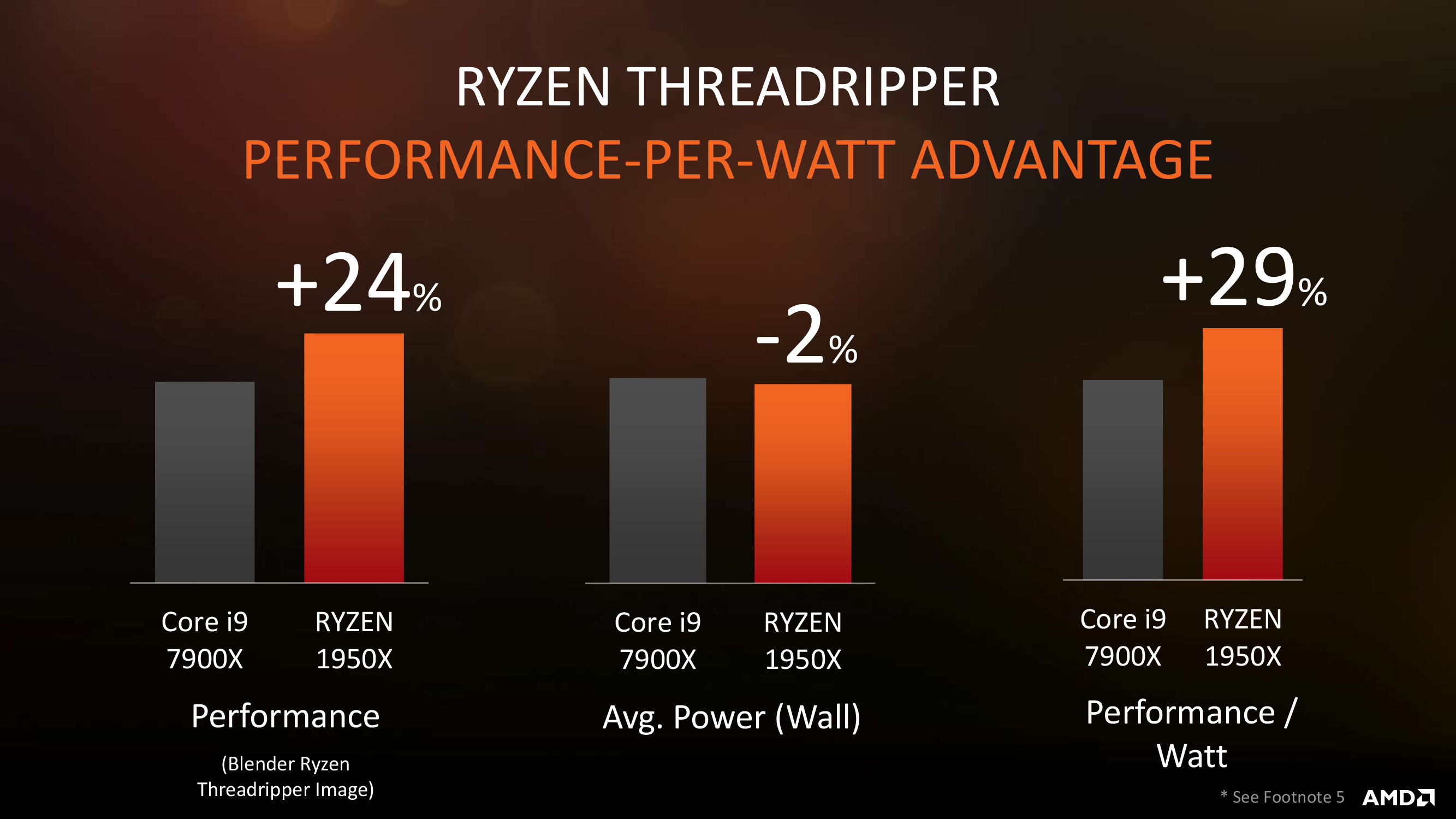 We are still waiting for full reviews before coming to a final answer on the power consumption and efficiency of Threadripper against the Skylake-X family, but AMD gave us a bit more information in the slide above. Comparing the Core i9-7900X to the Threadripper 1950X, AMD shows a 24% advantage in performance with Blender while running at nearly the same power draw (2% lower, for the full system, at the wall).  The result is a 29% edge in performance per watt. Obviously, this is a single data point with a single benchmark and scenario – much more testing is needed to see how efficient the high-core-count Threadrippers are going to be. 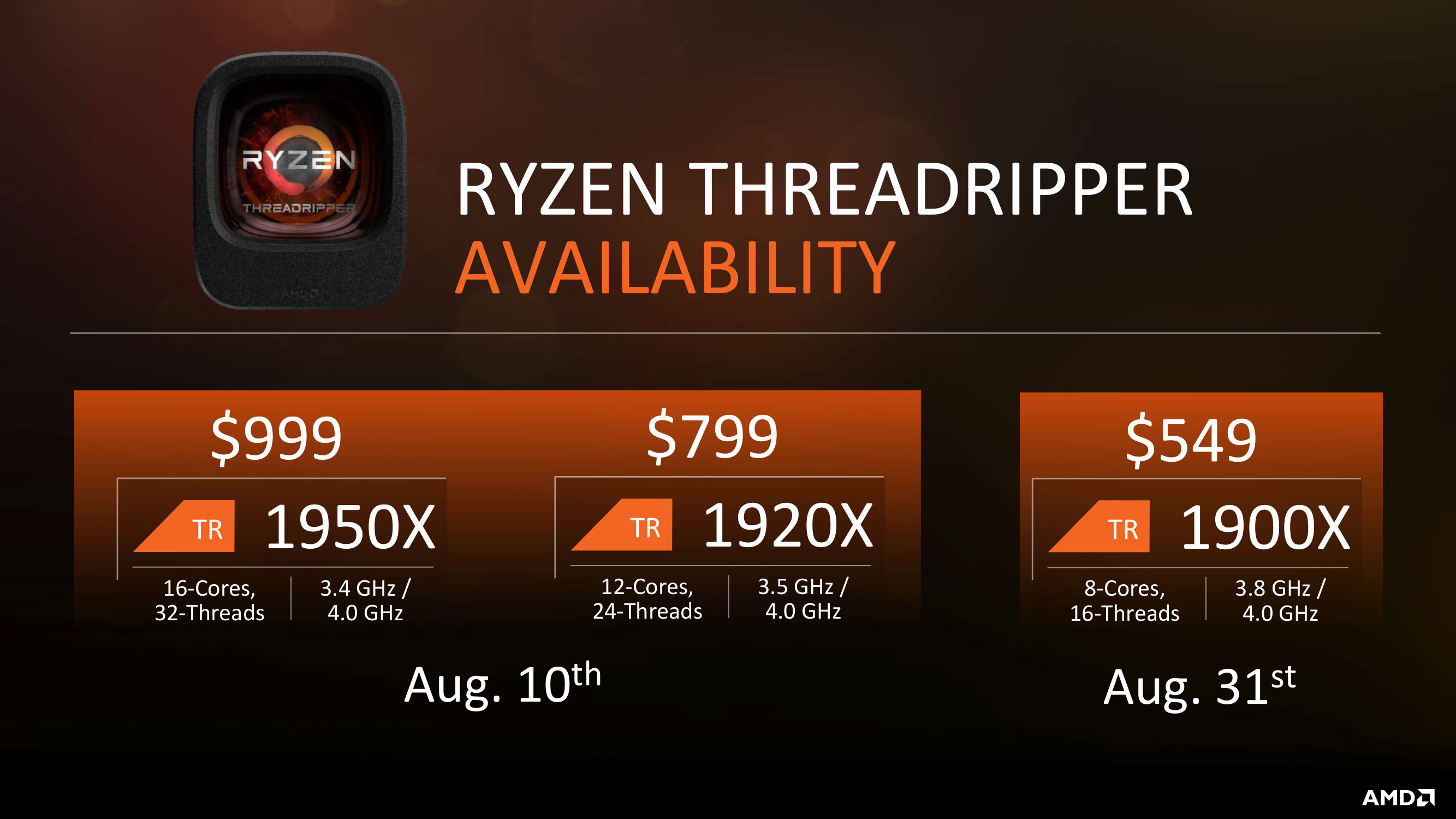 I know a lot of our readers have been trying to figure out when Threadripper is going to go on sale: now we know. The 1950X and 1920X will be on sale on August 10th with preorders starting on July 31st! The newly announced 1900X will be a bit tardy, targeted with an August 31st sale date.

AMD shared a couple of other new bits of information as well. 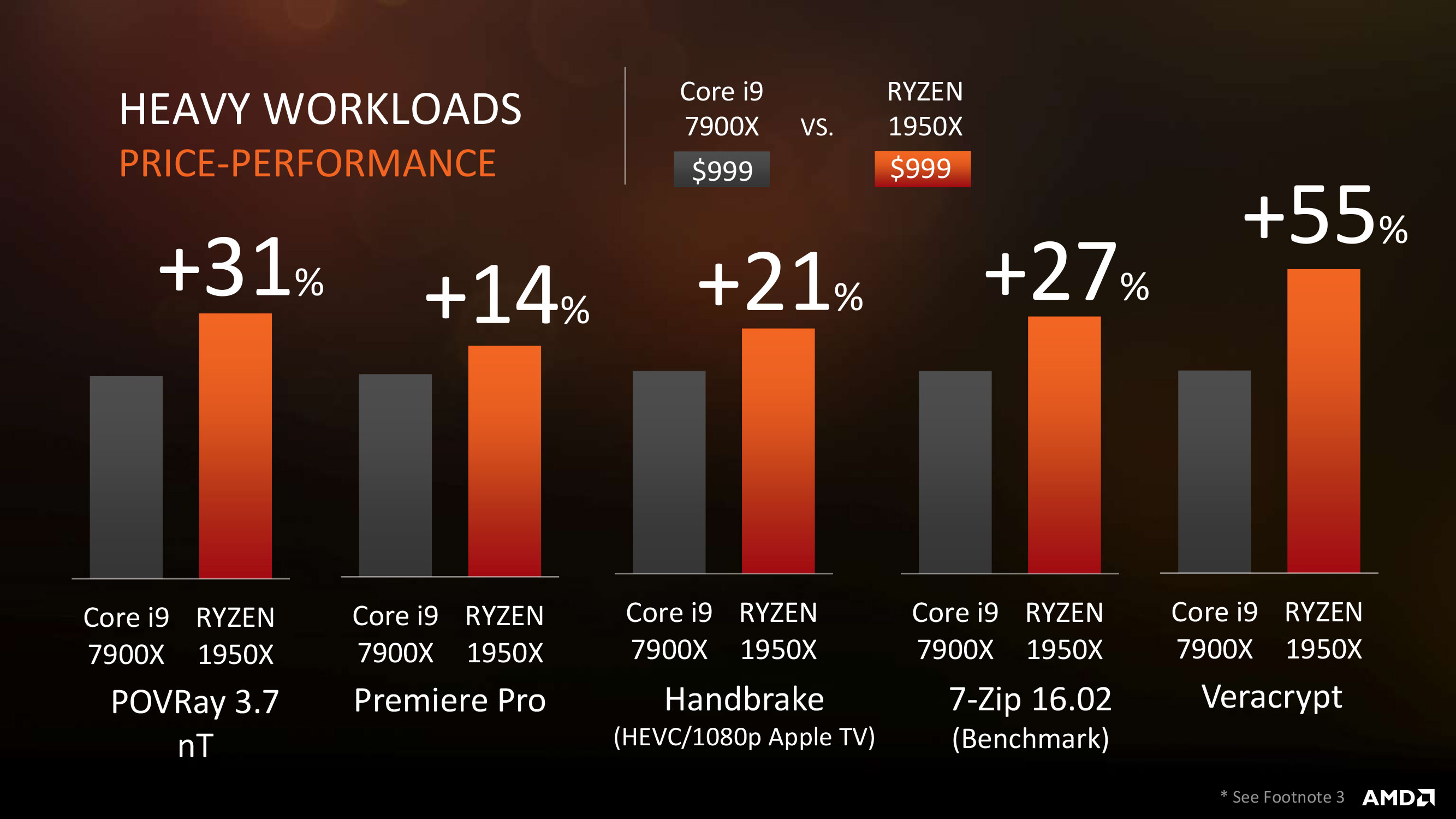 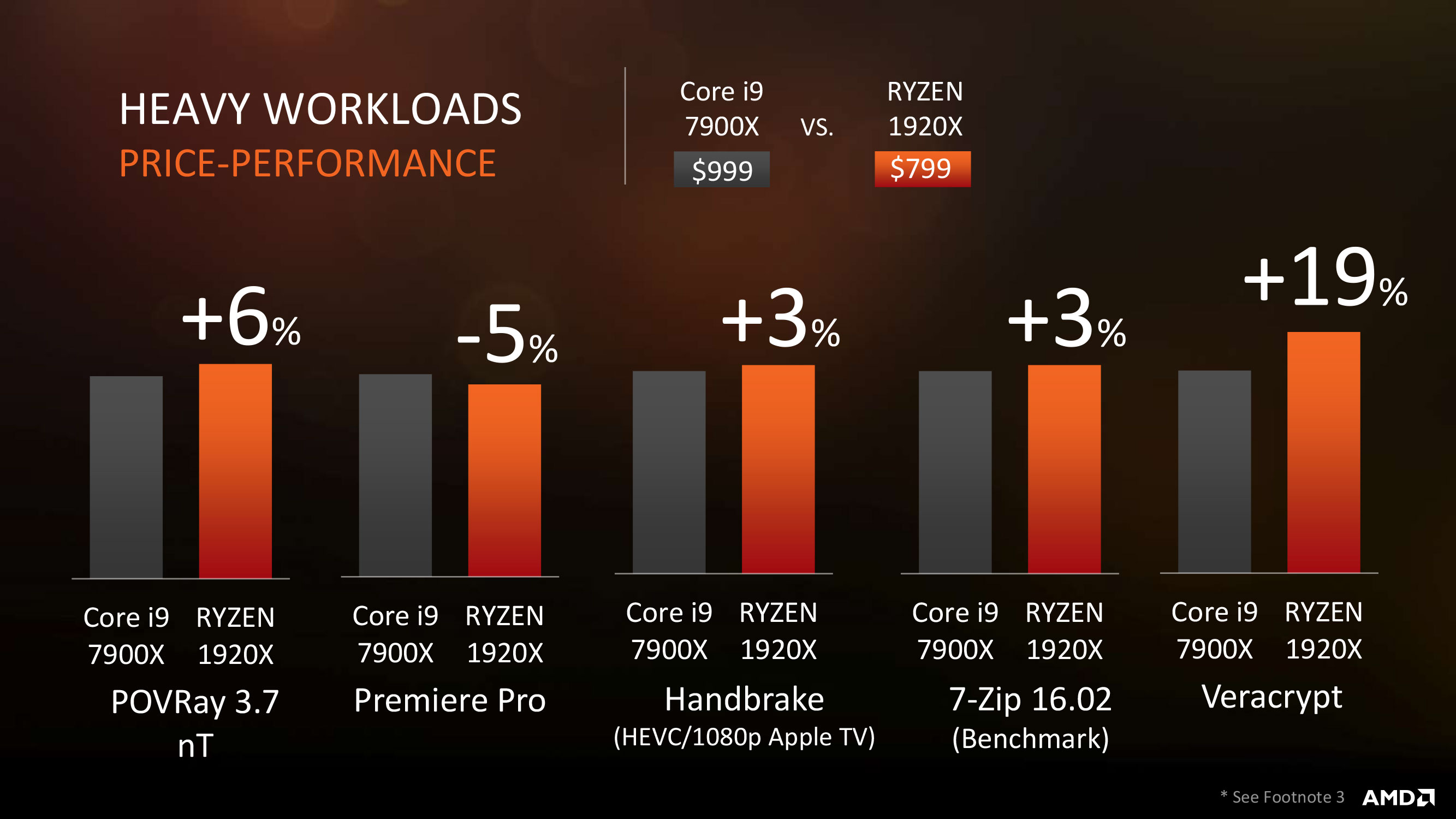 Rather than leaving consumers with just a single test to measure performance by, AMD has pitted both the 16-core 1950X and the 12-core 1920X against Intel’s 7900X processor in POV-Ray, Premiere Pro, Handbrake, 7-zip, and Veracrypt. The 1950X is showing 20-30% advantage while the 1920X seems to be +/-5%. Considering the $200 price advantage the 1920X has over the Intel CPU, as well as the PCIe lanes increase, this will be a popular selection for a lot of users. 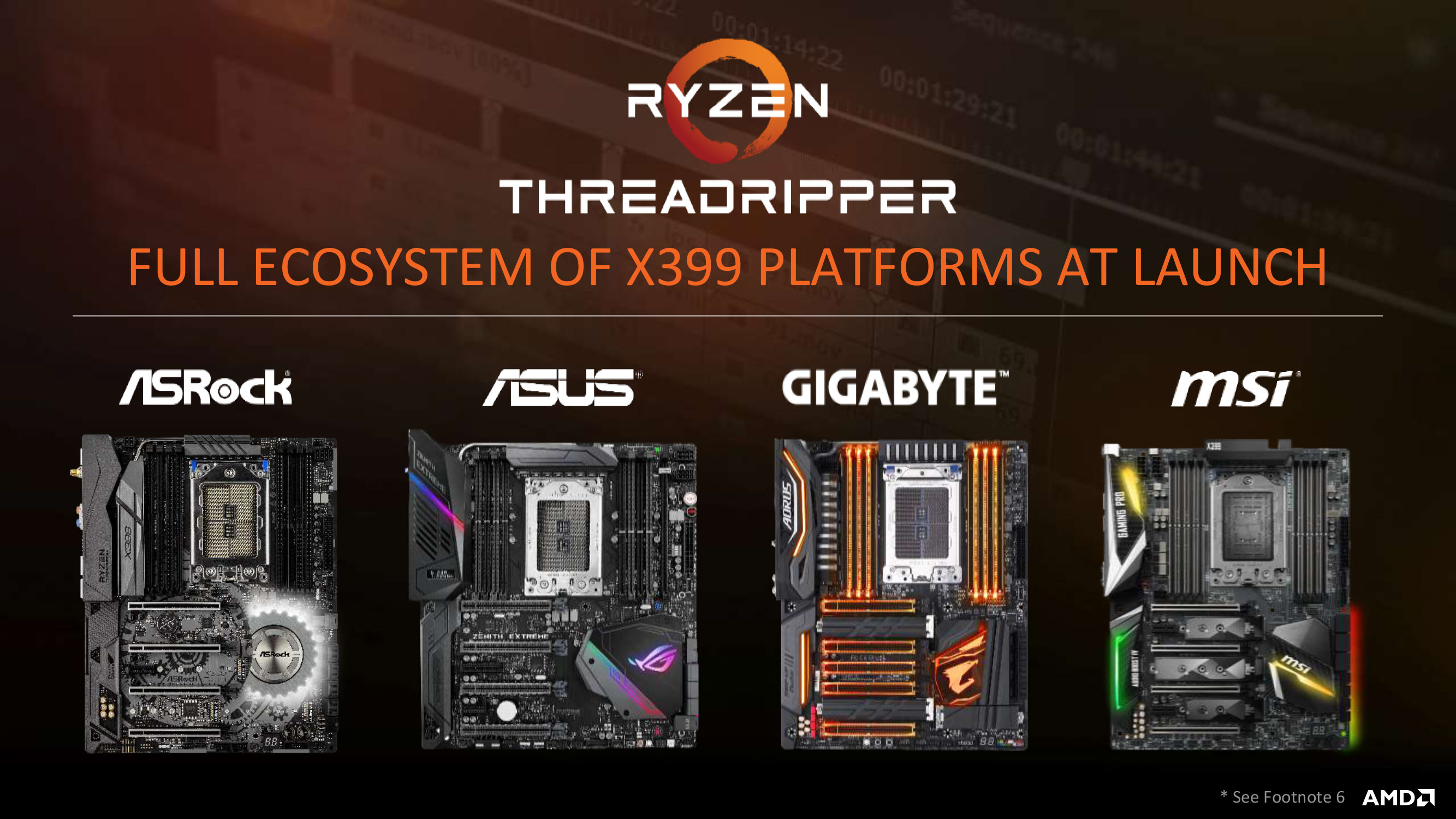 AMD was touting its partners and the preparedness of the ecosystem ahead of the Threadripper availability on the 10th. AMD is very aware of the issues that haunted them for weeks and months after the Ryzen 7 release with poor motherboard implementations and the teams are eager to avoid that fate this time around. To be fair, this is still a very rushed launch from what the board partners are telling me, but initial testing appears to be more stable. 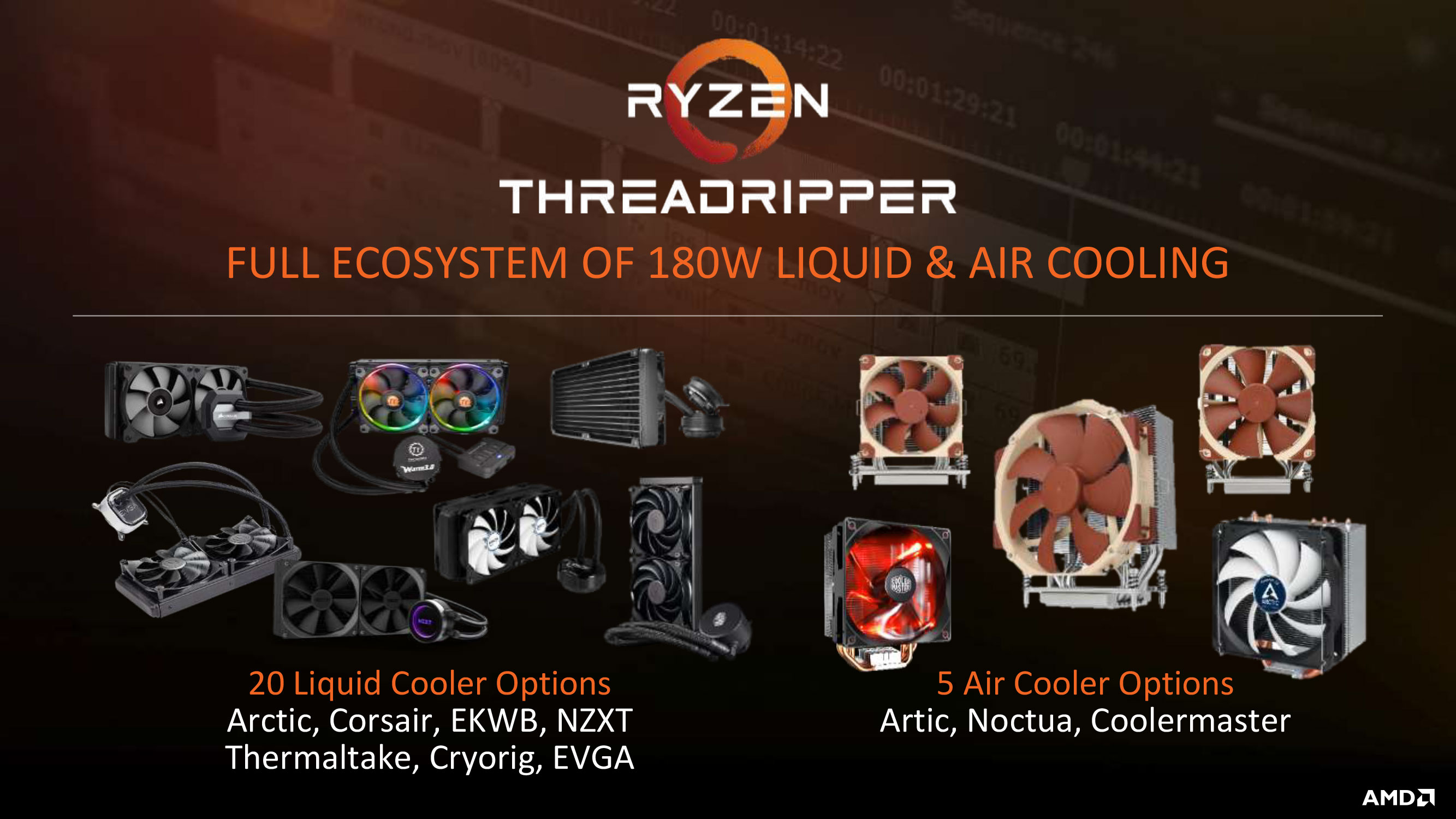 Finally, AMD did mention that there would be a vibrant ecosystem of air and liquid coolers ready for the Threadripper release on August 10th. AMD is including a bracket with the CPU that will adapt the Asetek-built water blocks (with the tooth-style retention) for the TR4 socket.

Just before the Threadripper systems started shipping to reviewers, overclocked der8auer delidded a Threadripper CPU and found four dies under the heatspreader. The assertion was that all were real dies with two of them disabled to give us 16-cores. That would have been a HUGE WASTE if in fact AMD was simply taking the EPYC design and fusing off two dies. 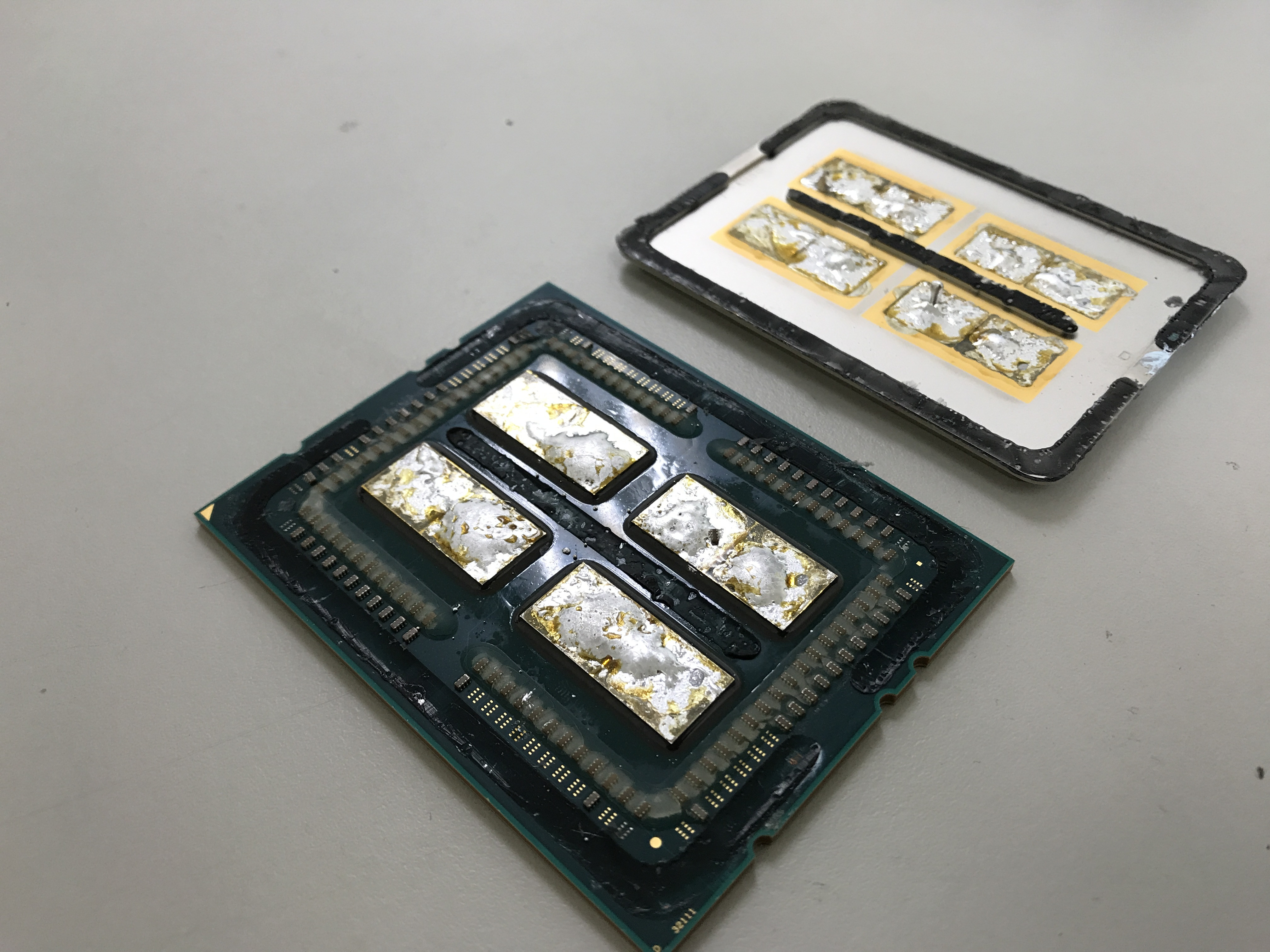 As it turns out, AMD confirmed to us that only two of the dies on that substrate have working transistors on them and the other two are simply blank wafer pieces to help with the structural support of the heatspreader! In otherwords, there are two blank, worthess chunks of silicon on the part to keep the top from caving in. (Note that the two working dies are always going to be diagonal from each other.)

We are just days away from the full release of reviews where we will be able to discuss performance in all aspects, including gaming, lightly threaded applications, mega-tasking, and more. It might be early to say it, but I believe AMD has a winning product on its hands and a large community of consumers that is ready to take on a newcomer into the HEDT field.