AMD has a new driver with new features and new abilities.

The software team at AMD and the Radeon Technologies Group is releasing Radeon Crimson ReLive Edition 17.7.2 this evening and it includes a host of new features, improved performance capabilities, and stability improvements to boot. This isn’t the major reboot of the software that we have come to expect on an annual basis, but rather an attempt to get the software team’s work out in front of media and gamers before the onslaught of RX Vega and Threadripper steal the attention. 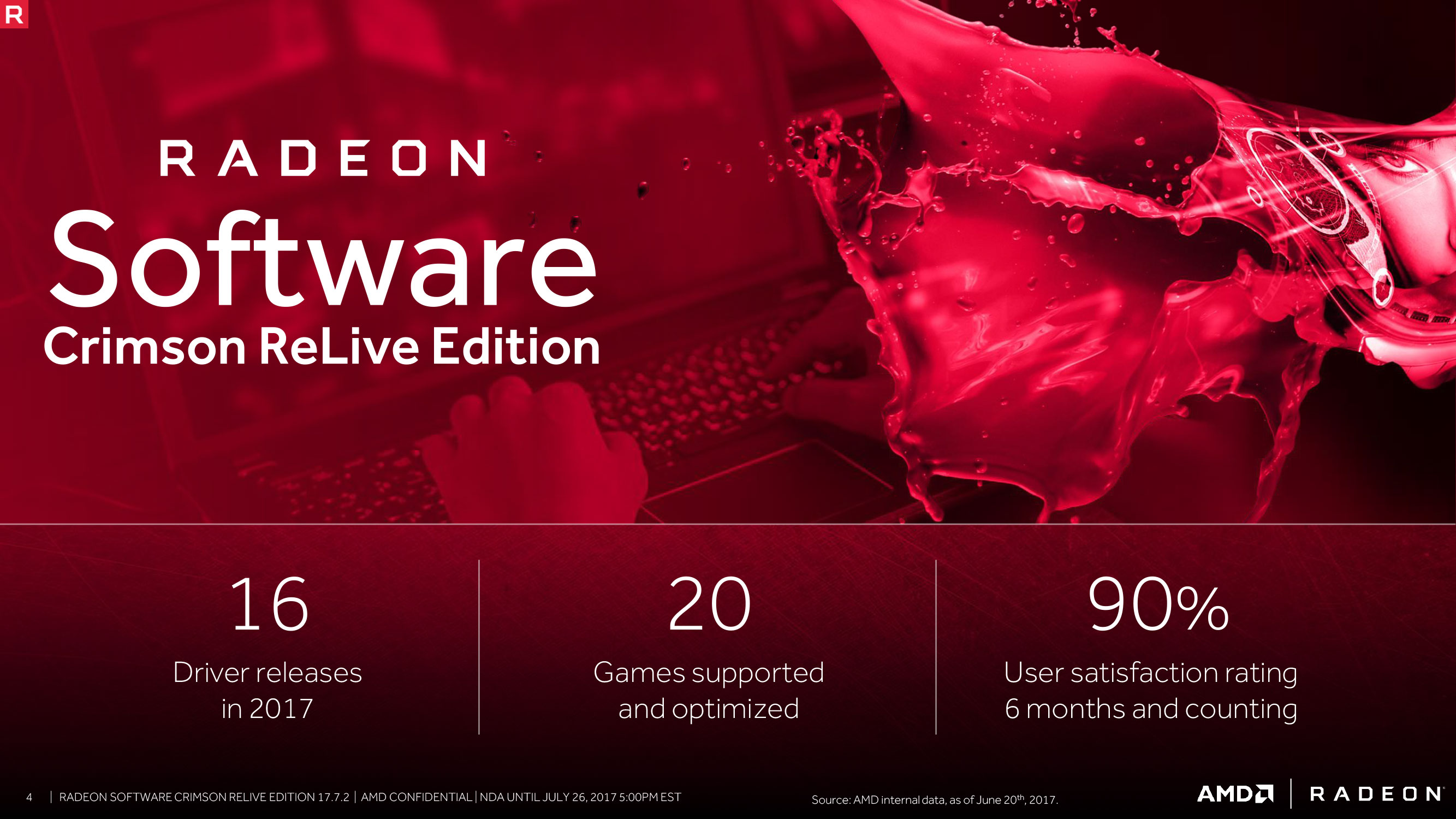 AMD’s software team is big on its user satisfaction ratings, which it should be after the many years of falling behind NVIDIA in this department. With 16 individual driver releases in 2017 (so far) and 20 new games optimized and supported with day one releases, the 90% rating seems to be about right. Much of the work that could be done to improve multi-GPU and other critical problems are more than a calendar year behind us, so it seems reasonable the Radeon gamers would be in a good place in terms of software support. 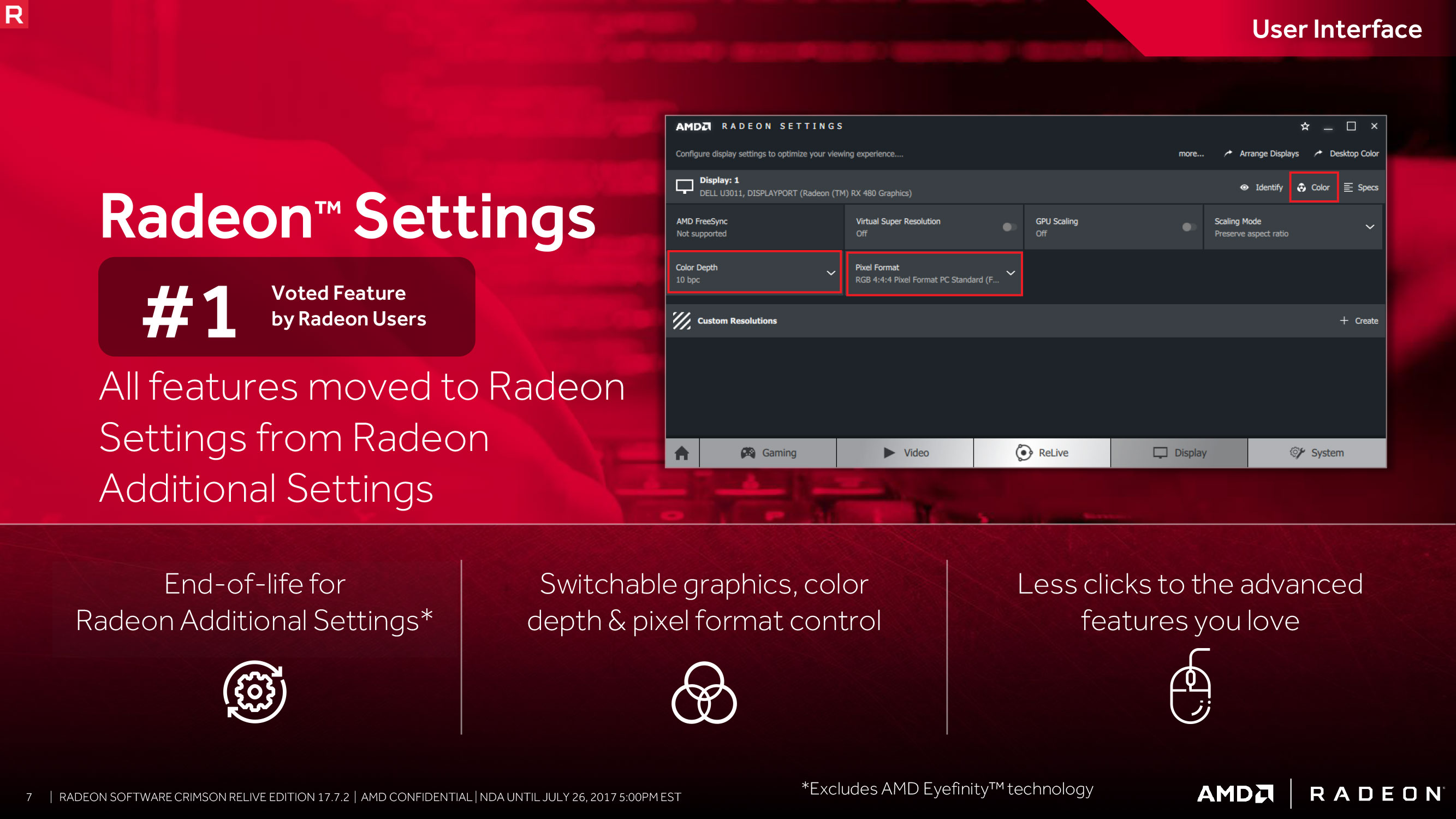 One big change for Crimson ReLive today is that all of those lingering settings that remained in the old Catalyst Control Panel will now reside in the proper Radeon Settings. This means matching UI and streamlined interface. 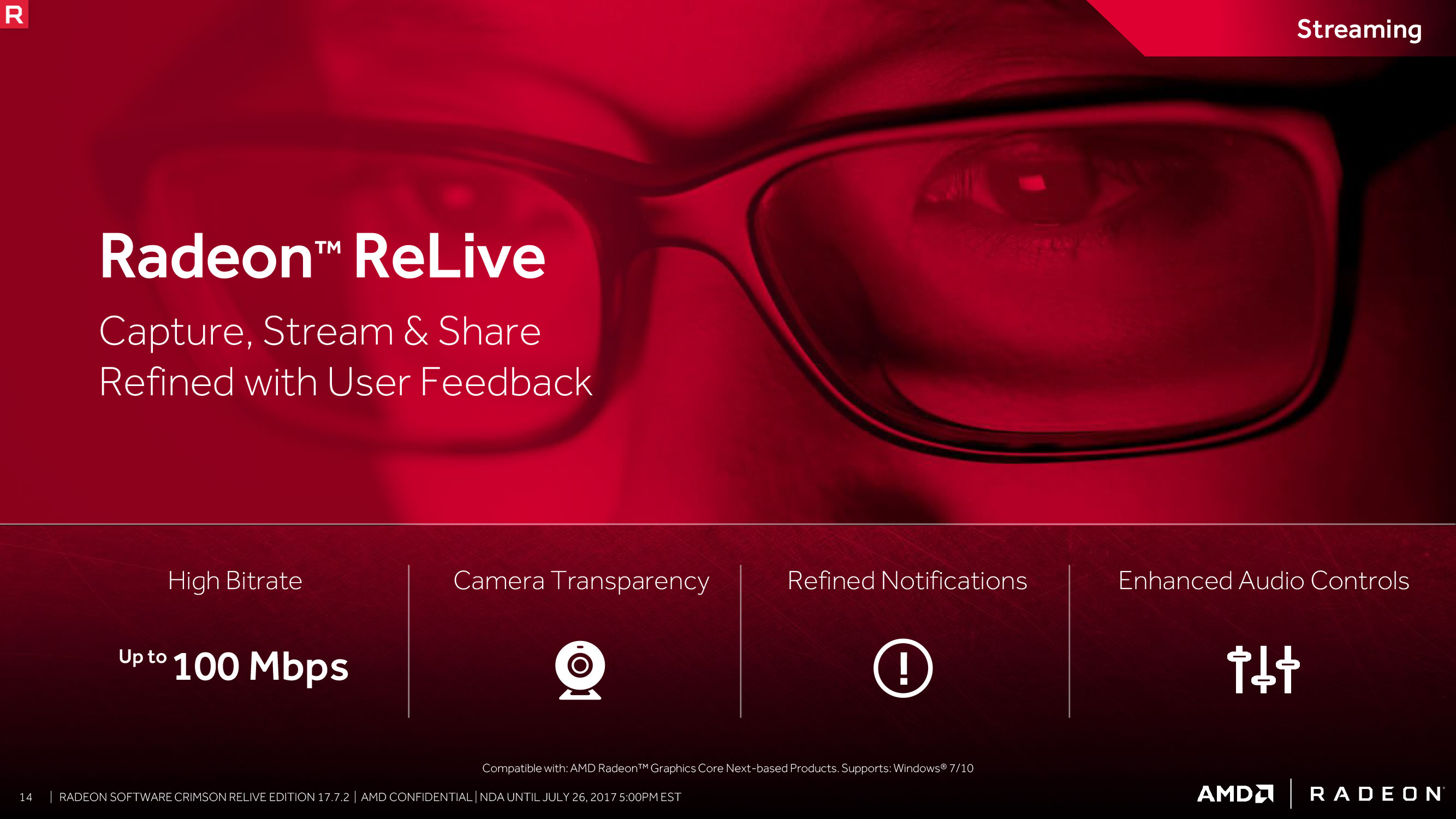 The ReLive capture and streaming capability sees a handful of upgrades today including a bump from 50mbps to 100mbps maximum bit rate, transparency support for webcams, improved optimization to lower the memory usage (and thus the overhead of running ReLive), notifications of replays and record timers, and audio controls for microphone volume and push-to-talk. 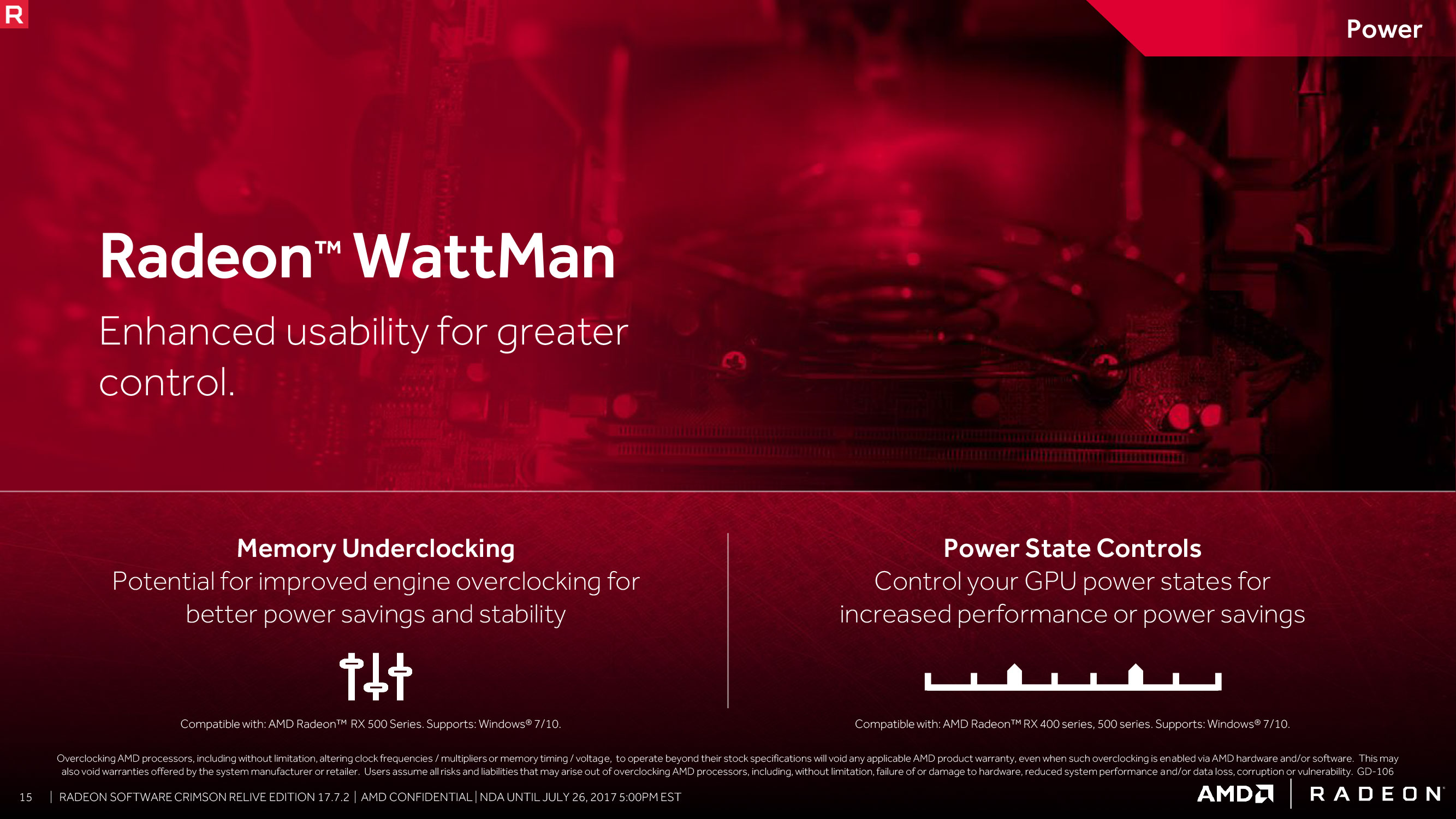 Wattman gets an upgrade with support for memory underclocking (looking at YOU miners) and direct control over the GPU power states. This allows gamers or miners to specific which DPM states the GPU is allowed to reside in, giving you the ability to force the GPU into higher performance or lower power states as you see fit. 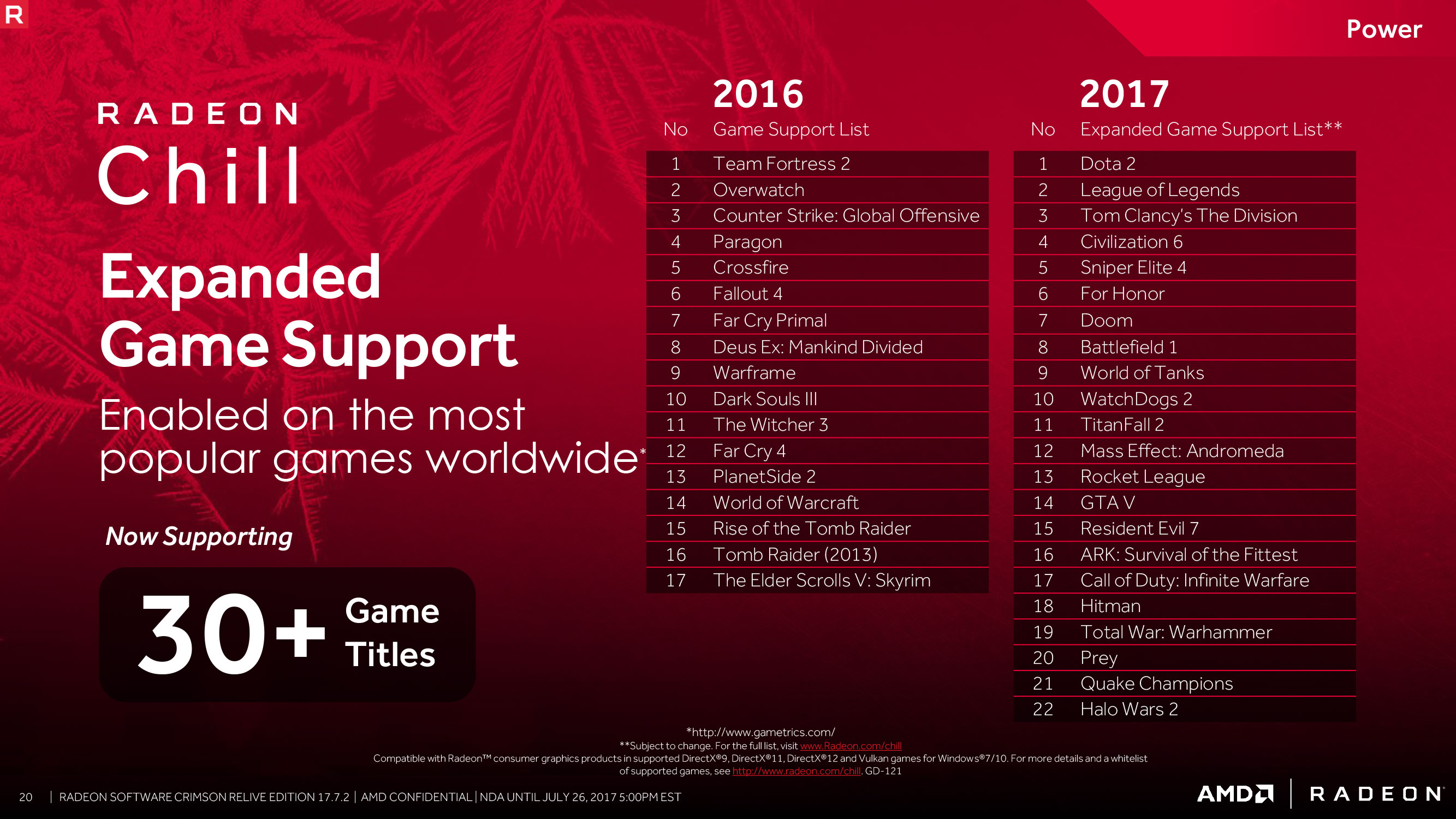 Radeon Chill is an interesting feature that continues to be improved upon. This release will now support more than 30 titles including some of the most recently and important games of 2017 like Battlefield 1 and Prey. 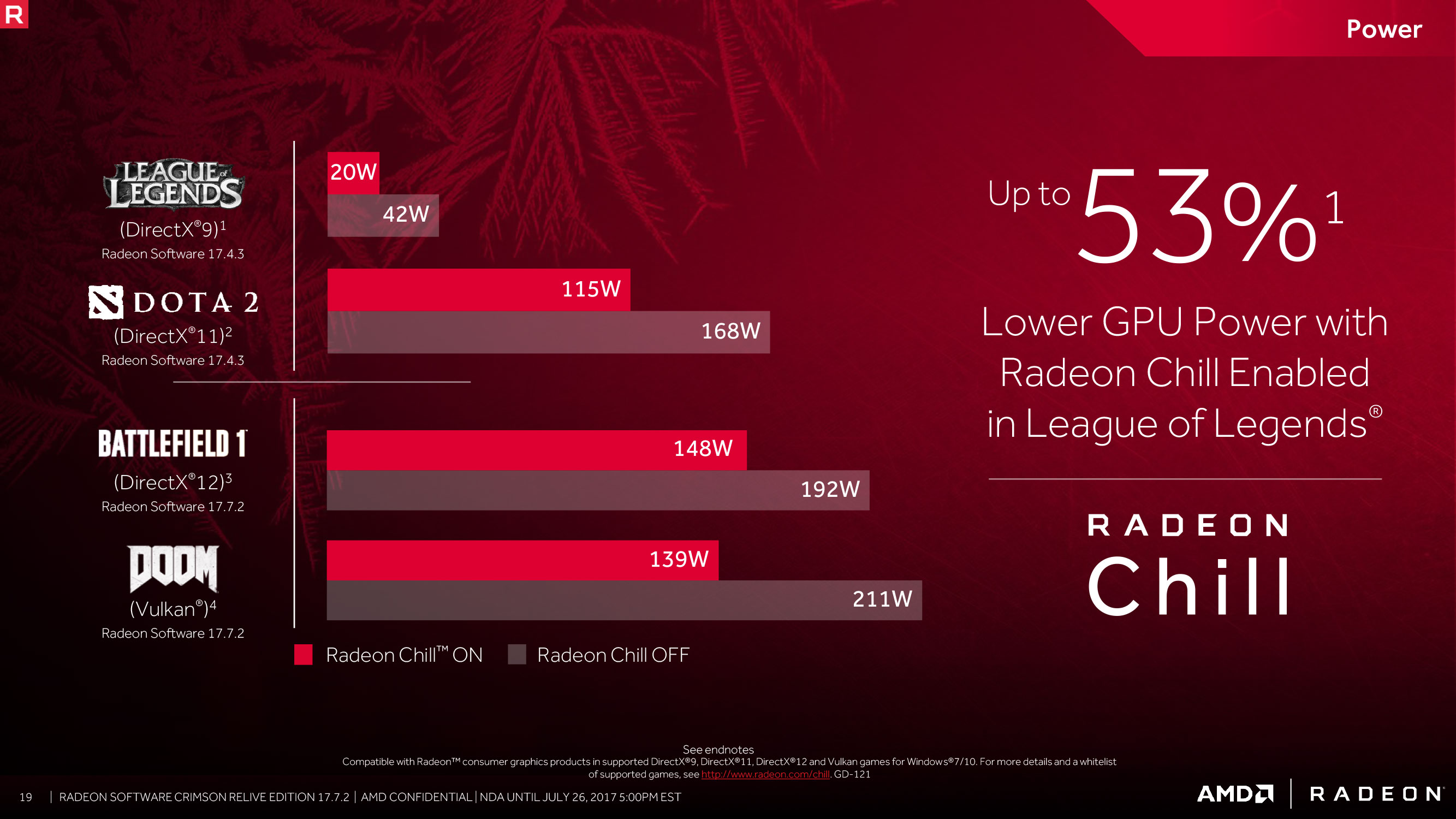 Power consumption drops are now available for DX12 and Vulkan game titles (previously it was only DX9 and DX11), and AMD has added support for Chill in CrossFire / multi-GPU configurations, external GPUs through XConnect, and even gaming notebooks with the OEM allows it. 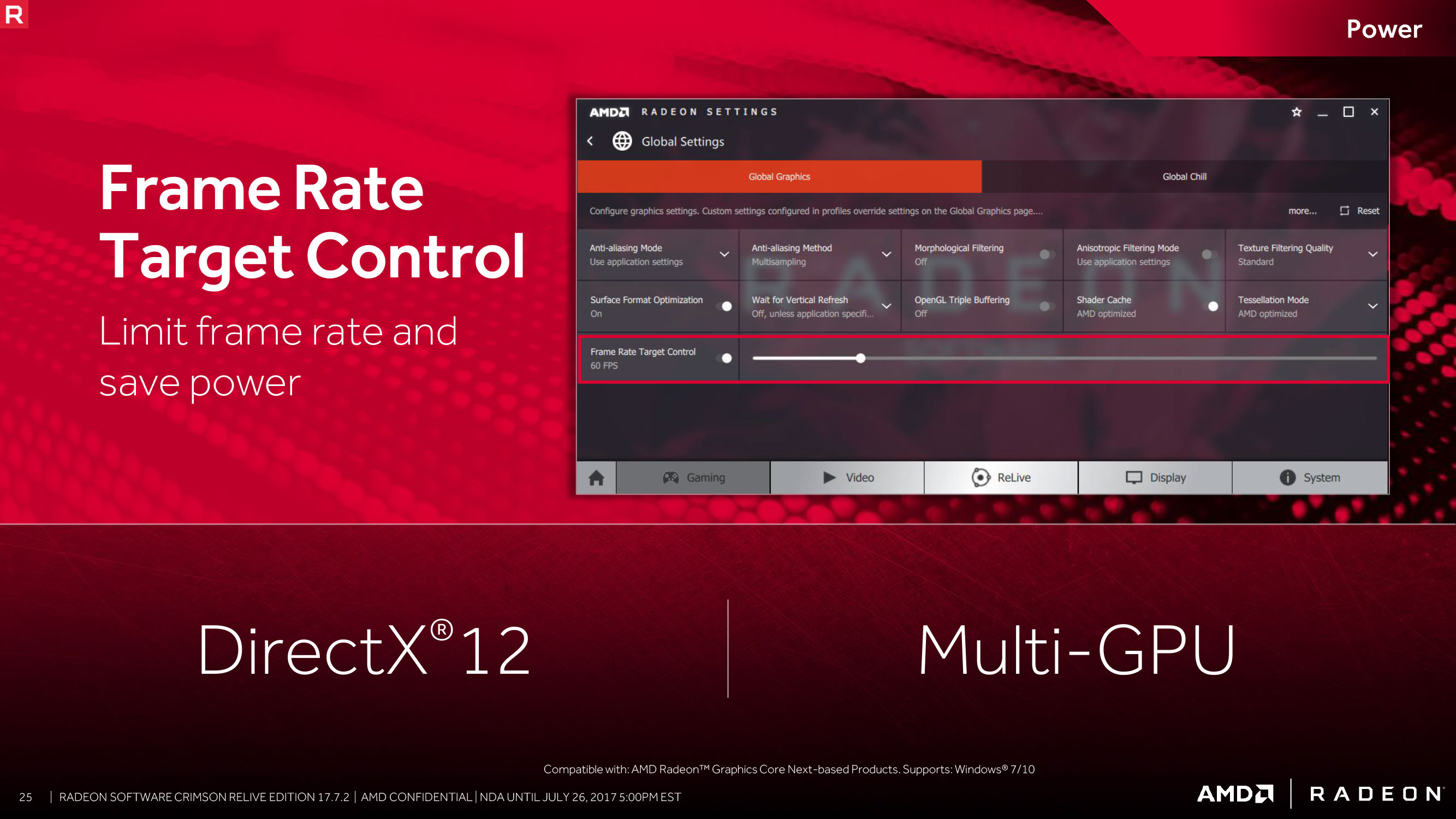 There are a lot of fans for AMD’s Frame Rate Target Control feature and Crimson ReLive 17.7.2 adds support for DX12 and multi-GPU systems in this release. AMD’s example of power savings was in BF1 that showed a 26% lower average GPU power consumption for FRTC enabled at 150 FPS. 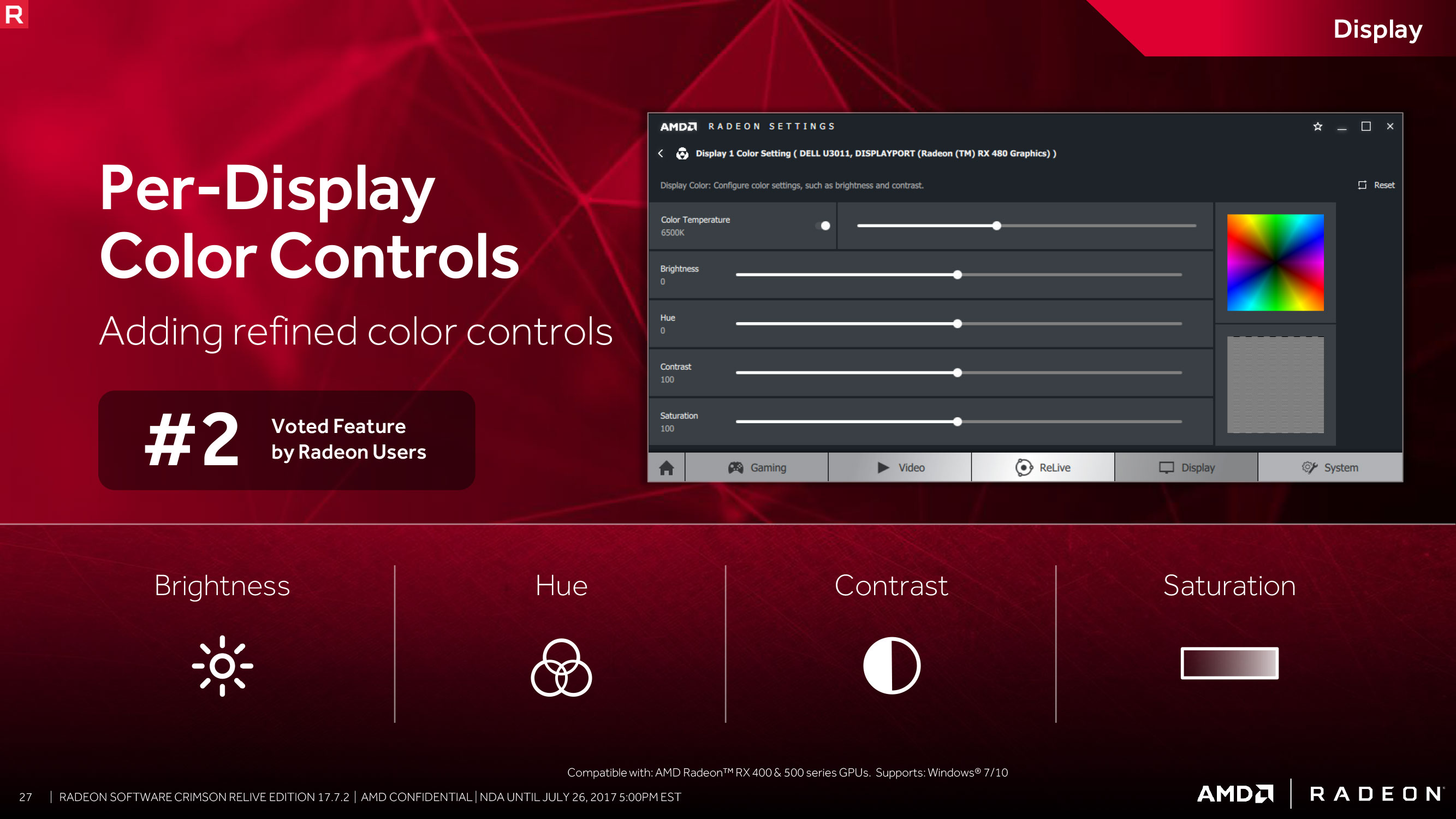 Per-display color controls was the #2 requested feature by Radeon users and AMD is bring that capability back to the driver with Crimson ReLive. If you know what this is, you are likely very excited to see this slide!

By far the biggest and most interesting feature release for this driver is Enhanced Sync, a new option under the Vsync tab in the driver that aims to bring you the best of both tear-free gaming and uncapped frame rates. 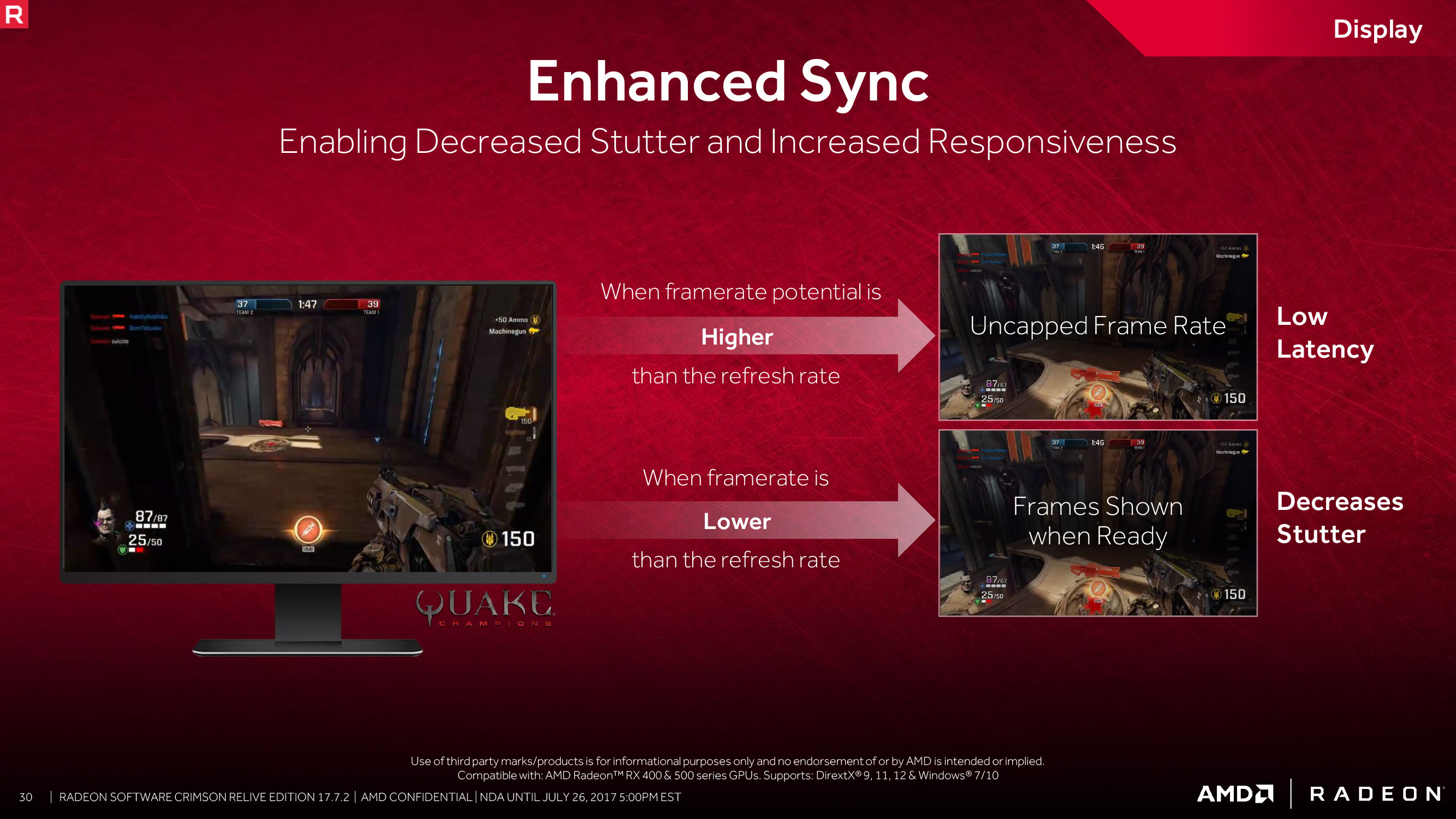 The idea of what Enhanced Sync does might seem complicated at first but it easier to wrap your head around if you look at the system in two states: above the refresh rate of your panel and below the refresh rate. When your game is running at 90 FPS on a 60 Hz screen, you generally had the decision to enable or disable standard Vsync, which allowed you a tear-free experience with longer latency from mouse/keyboard input to the next frame (because you were metering the gaming engine) or with screen tearing at the lowest latency for input. With Enhanced Sync the game engine is allowed to render at its full speed (90 FPS in this example) but the driver only outputs the latest FULL frame when the displays refresh window resets. This gives you no on-screen tearing and faster input by letting the game engine continue to *think* its output at 90 FPS. 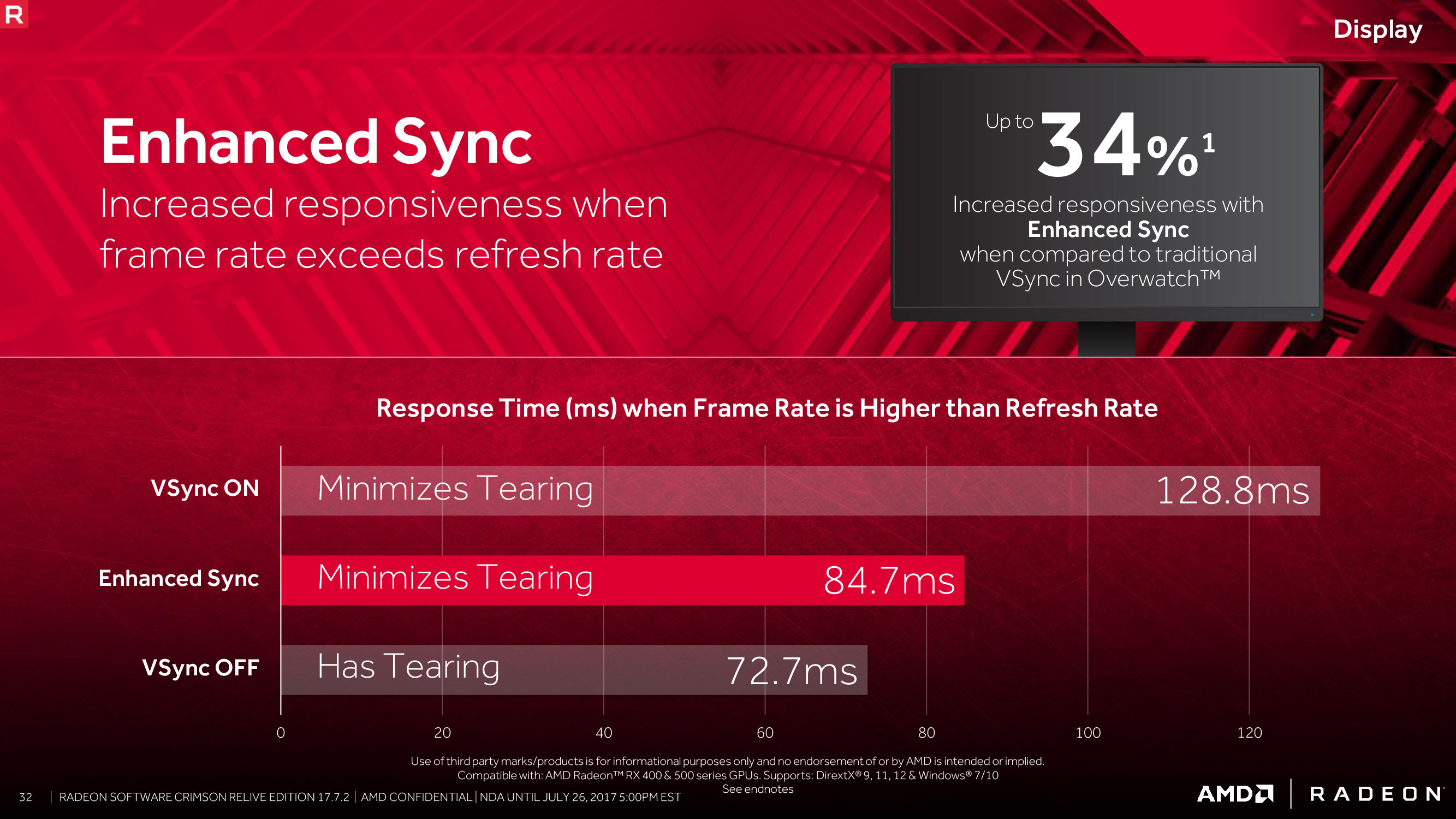 The result is minimal tearing with improved input latency when compared to a Vsync on state. Yes, Vsync off will still give you the absolutely minimum of latency but at the expense of horizontal tearing. 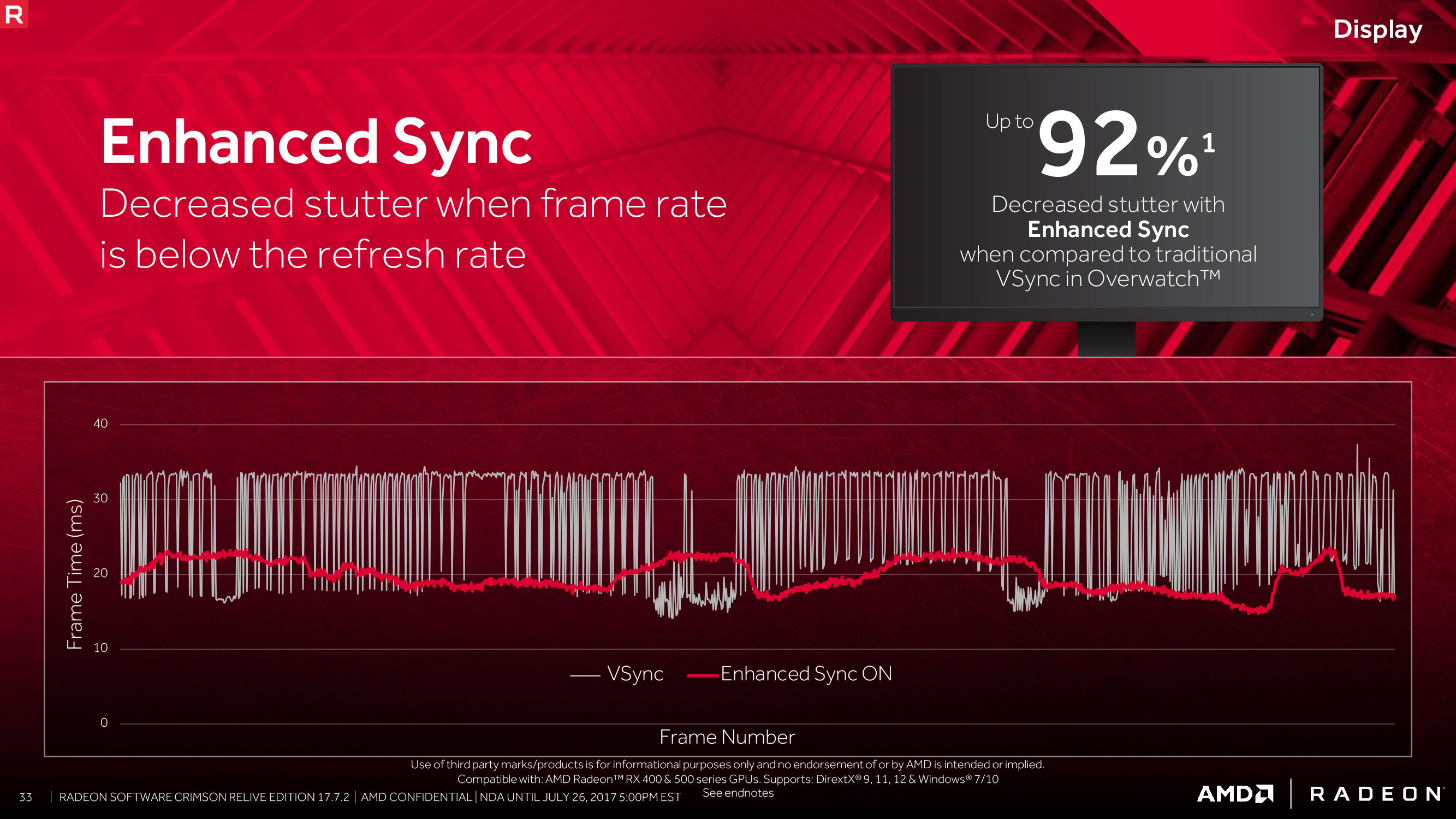 When you are under the refresh rate of your monitor, the Enhanced Sync settings goes into another mode that attempts to offer a much smoother gaming experience without tearing but will regress into a state that allows tears if the frame rate drops “far enough below the display’s refresh rate.” From AMD’s paper provided to the media before release:

When Enhanced Sync does allow tearing, users should typically only see a single tearing “seam” on the screen at once, since the frame rate is low. And Enhanced Sync will automatically choose to stop allowing tearing once the game’s frame rate returns to a more comfortable level.

So Enhanced Sync improves on traditional vsync by combining two techniques. At high frame rates, it aims to provide a better mix of visual integrity and responsiveness. At lower frame rates, it uses a dynamic algorithm minimize both stuttering and input lag when the going gets tough.

I don’t have details on how the algorithm works yet and how it decides that it will enter and exit the tearing state, but I am hoping to get more answers when we start doing our own testing of the driver this week. 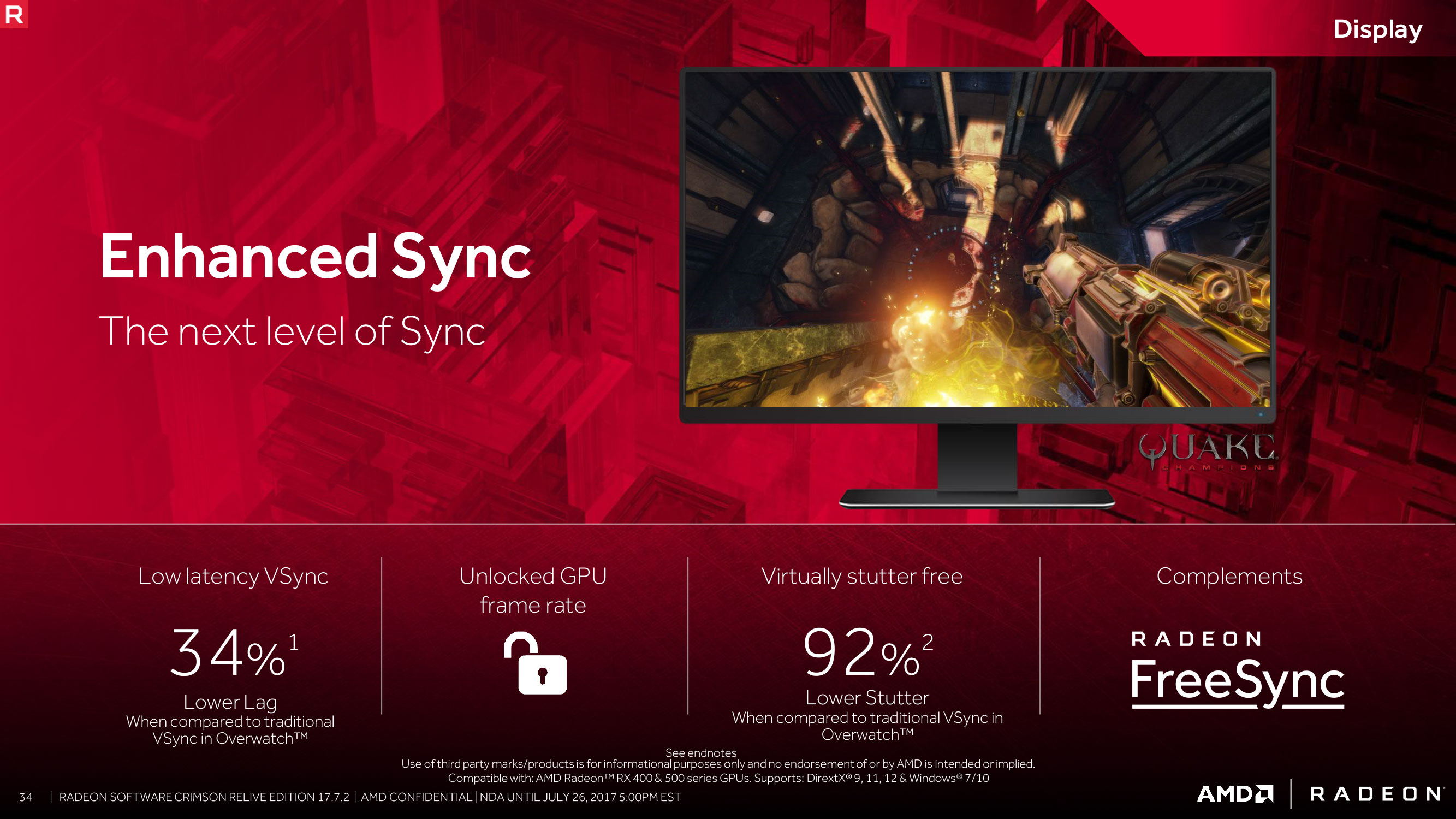 It’s also worth noting that Enhanced Sync can work just with FreeSync displays. Above the maximum refresh rate, where a VRR display would simply revert to a Vsync-like state, Enhanced Sync has the same benefits. If the FreeSync monitor does not support LFC (low frame rate compensation), then Enhanced Sync will again work with the same algorithm mentioned above to try and minimize tearing and input when possible.

NVIDIA has had a feature like this in its drivers called FastSync that was released with the GeForce GTX 10-series of graphics cards in May of 2016.

AMD dives further into the performance improvements in the Crimson driver over the last year, though no specific games or results were called out for this driver release in particular. Games like Wildlands, Mass Effect Andromeda, and Prey have seen 12-13% performance uptick with today’s 17.7.2 driver compared to the 16.12.1 driver that launched the ReLive brand. Linux drivers continue to get additional love from AMD as well with as much as a 122% increase in performance spotted in the Phoronix testing in June. 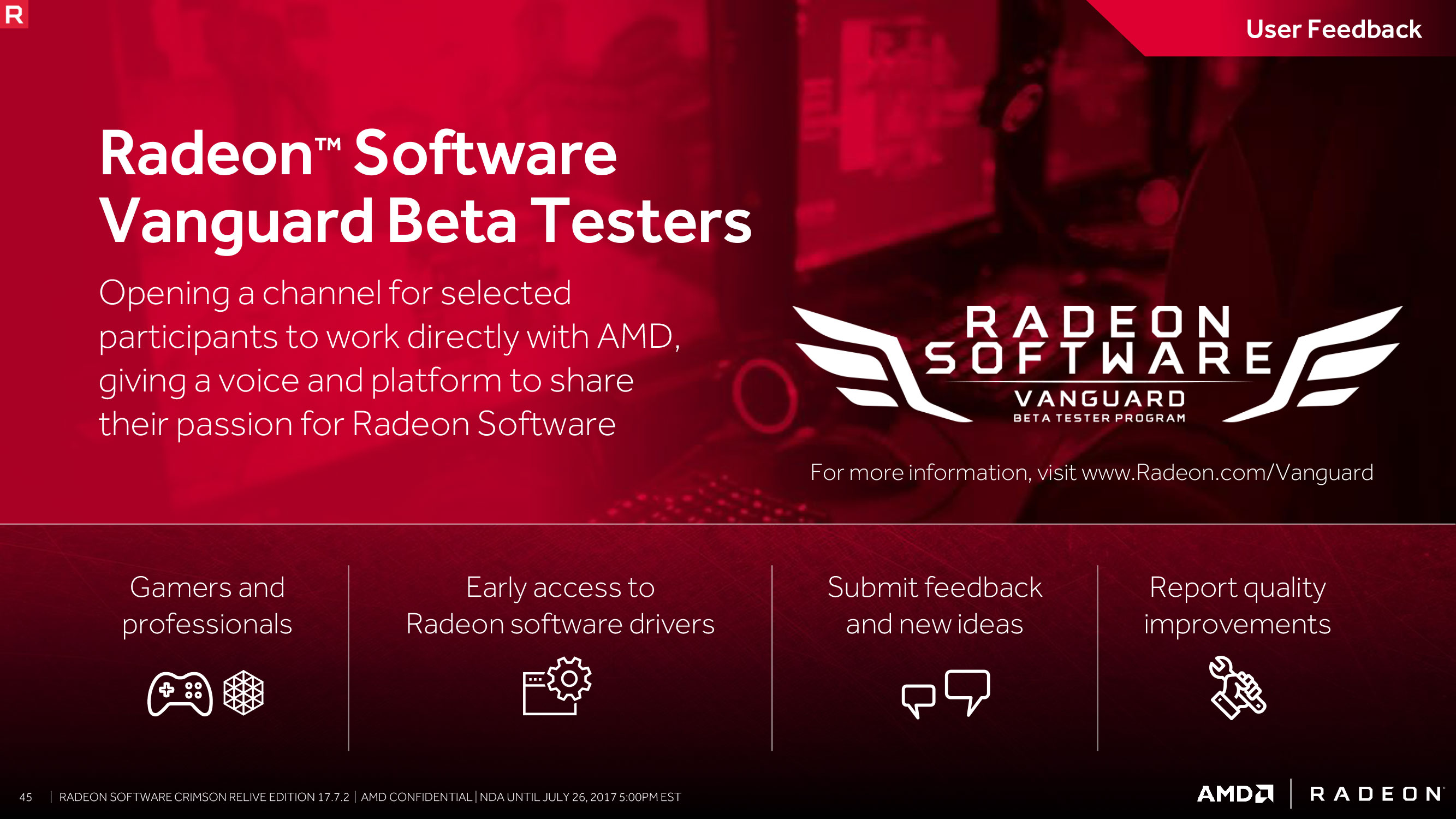 For users that like to be on the bleeding edge and would like to help AMD improve its work on the Radeon software stack, the company is starting the Radeon Software Vanguard program for beta testers. This will allows users like you to get early access to new features in exchange for beta testing and feedback, helping to make the software solution better for everyone involved.

Other changes are implemented in this release today including the AMD LiquidVR 360 SDK for video playback, updates to the OCAT performance testing tool, and a new piece of software for developers called the Radeon GPU Profiler that will allow them to analyze and accelerate games and systems. 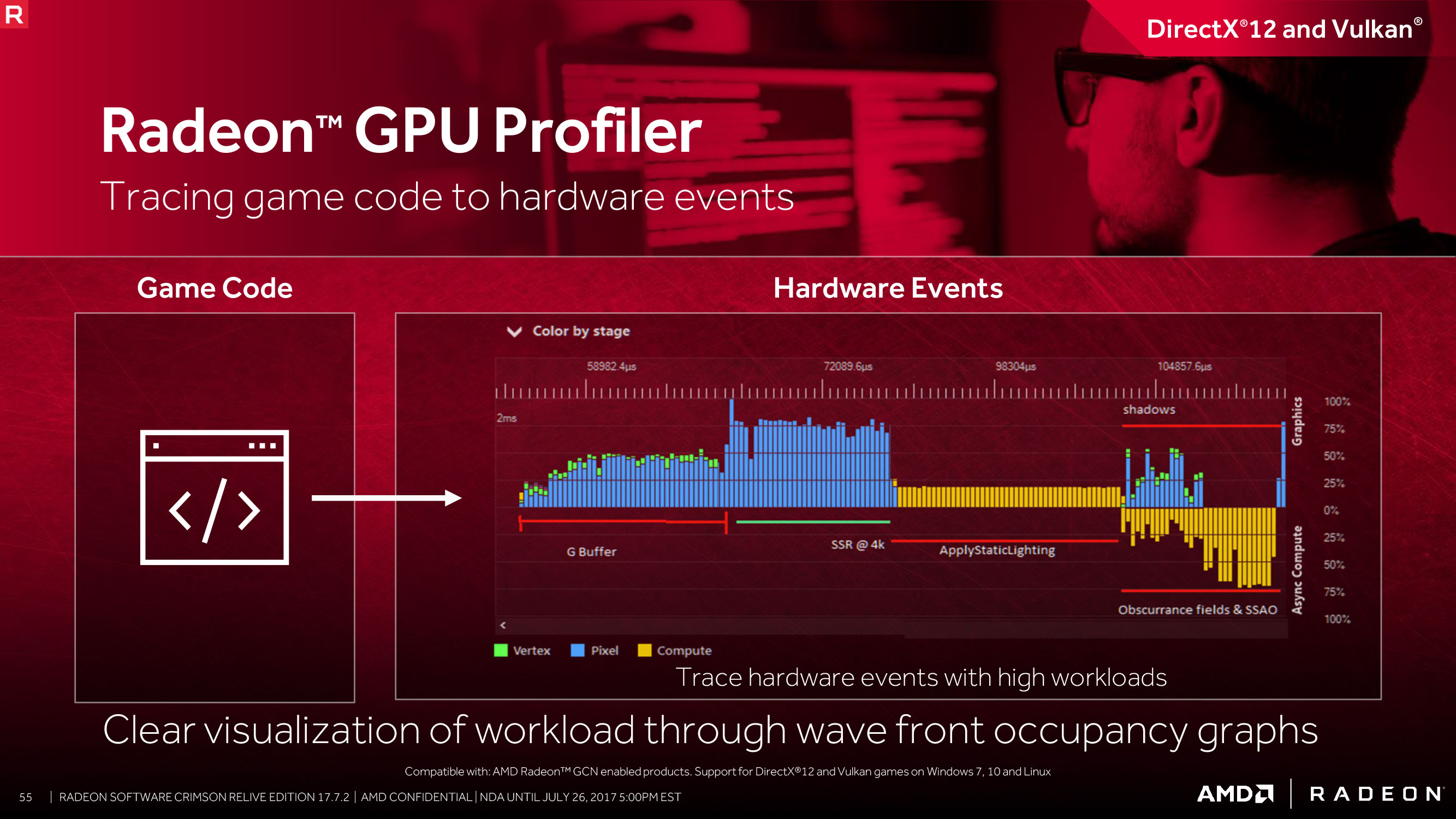 This AMD’s last push for software before we dive into the world of RX Vega this weekend at LA and SIGGRAPH. The RTG and the AMD Radeon Software team continue to make significant strides to closing the gap with NVIDIA and its dominance on the software ecosystem. There is still some work to do to get more gamers over the previous assumptions of AMD’s drivers, but that is a long term goal that the management at the company understand and are committed to cutting down.

Now, let’s see how much software impacts our RX Vega views in the coming days. 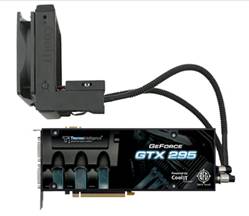