We take a look at a GTX 1080 Ti connected to an notebook!

External video cards for laptops have long been a dream of many PC enthusiasts, and for good reason. It’s compelling to have a thin-and-light notebook with great battery life for things like meetings or class, with the ability to plug it into a dock at home and enjoy your favorite PC games.

Many times we have been promised that external GPUs for notebooks would be a viable option. Over the years there have been many commercial solutions involving both industry standard protocols like ExpressCard, as well as proprietary connections to allow you to externally connect PCIe devices. Inspiring hackers have also had their hand with this for many years, cobbling together interesting solutions using mPCIe and M.2 ports on their notebooks which were meant for other devices.

With the introduction of Intel’s Thunderbolt standard in 2011, there was a hope that we would finally achieve external graphics nirvana. A modern, Intel-backed protocol promising PCIe x4 speeds (PCIe 2.0 at that point) sounded like it would be ideal for connecting GPUs to notebooks, and in some ways it was. Once again the external graphics communities managed to get it to work through the use of enclosures meant to connect other non-GPU PCIe devices such as RAID and video capture cards to systems. However, software support was still a limiting factor. You were required to use an external monitor to display your video, and it still felt like you were just riding the line between usability and a total hack. It felt like we were never going to get true universal support for external GPUs on notebooks.

Then, seemingly of out of nowhere, Intel decided to promote native support for external GPUs as a priority when they introduced Thunderbolt 3. Fast forward, and we've already seen a much larger adoption of Thunderbolt 3 on PC notebooks than we ever did with the previous Thunderbolt implementations. Taking all of this into account, we figured it was time to finally dip our toes into the eGPU market.

For our testing, we decided on the AKiTio Node for several reasons. First, at around $300, it's by far the lowest cost enclosure built to support GPUs. Additionally, it seems to be one of the most compatible devices currently on the market according to the very helpful comparison chart over at eGPU.io. The eGPU site is a wonderful resource for everything external GPU, over any interface possible, and I would highly recommend heading over there to do some reading if you are interested in trying out an eGPU for yourself.

The Node unit itself is a very utilitarian design. Essentially you get a folded sheet metal box with a Thunderbolt controller and 400W SFX power supply inside. 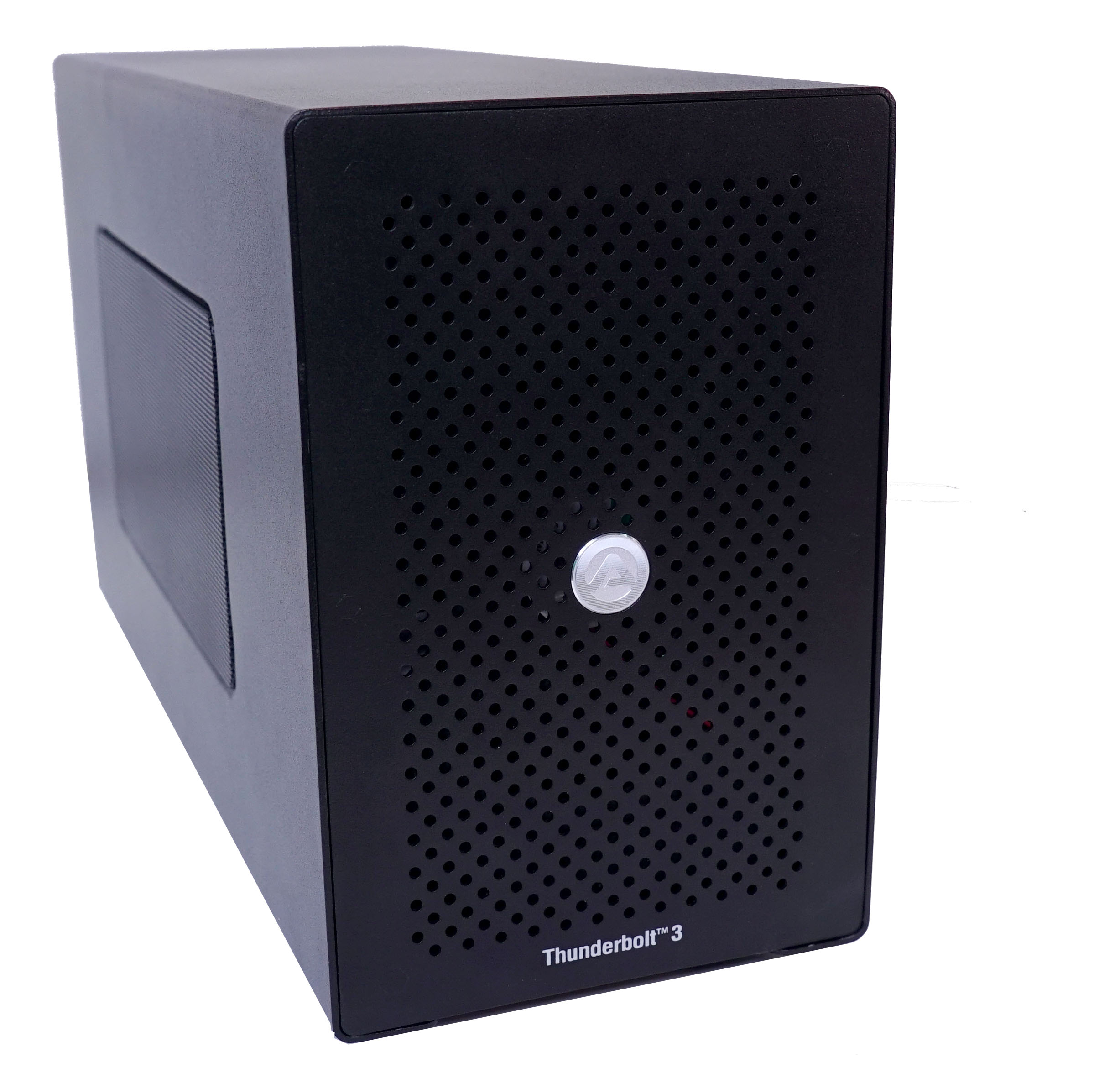 In order to install a GPU into the Node, you must first unscrew the enclosure from the back and slide the outer shell off of the device. 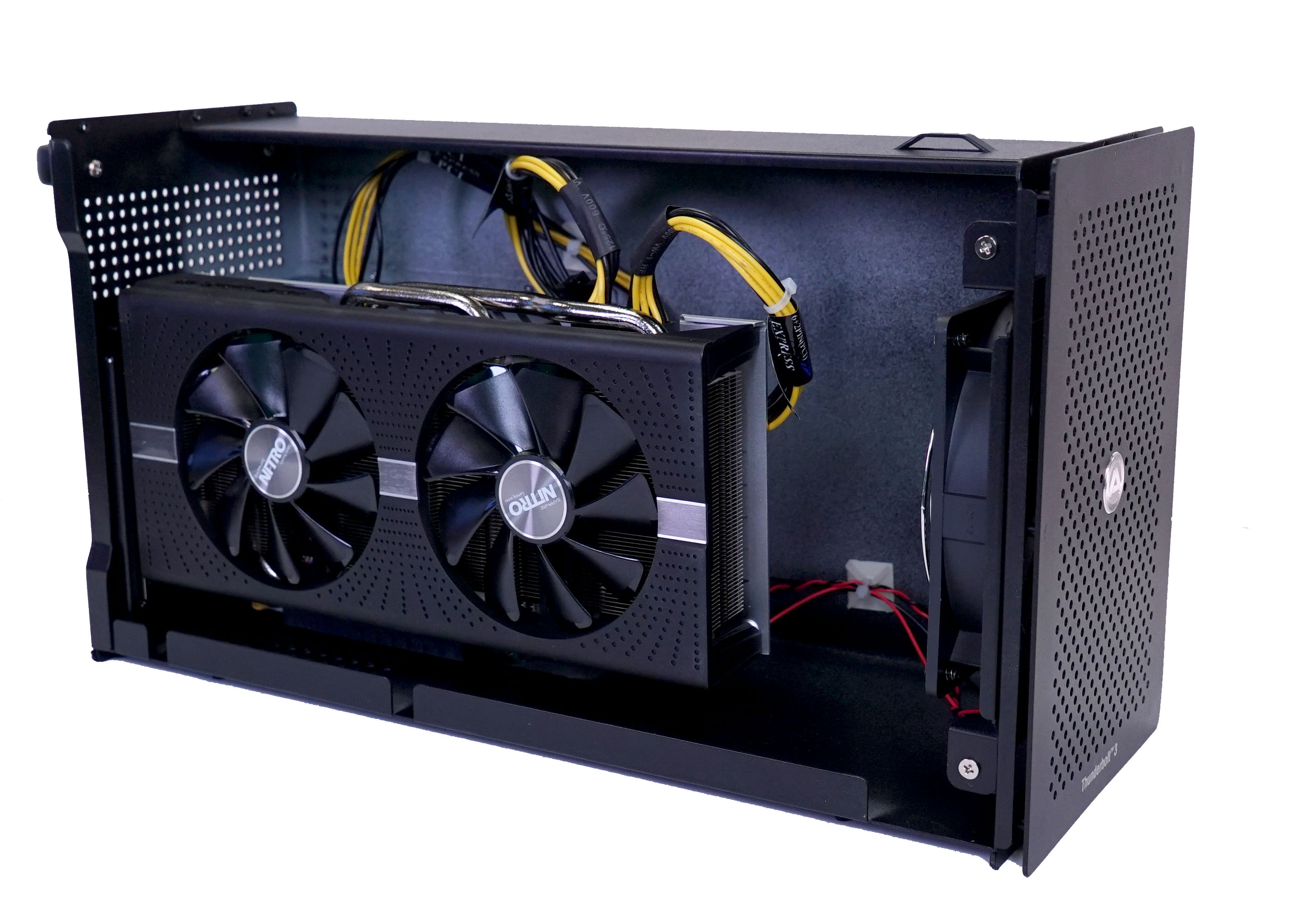 Once inside, we can see that there is ample room for any graphics card you might want to install in this enclosure. In fact, it seems a little too large for any of the GPUs we installed, including GTX 1080 Ti models. Here, you can see a more reasonable RX 570 installed.

Beyond opening up the enclosure to install a GPU, there is very little configuration required. My unit required a firmware update, but that was easily applied with the tools from the AKiTio site.

From here, I simply connected the Node to a ThinkPad X1, installed the NVIDIA drivers for our GTX 1080 Ti, and everything seemed to work — including using the 1080 Ti with the integrated notebook display and no external monitor!

Now that we've got the Node working, let's take a look at some performance numbers.