Once we had the AKiTiO Node up and running, we did what any excited person would do, install a GTX 1080 Ti and see how we could push gaming on an ultrabook-class laptop. 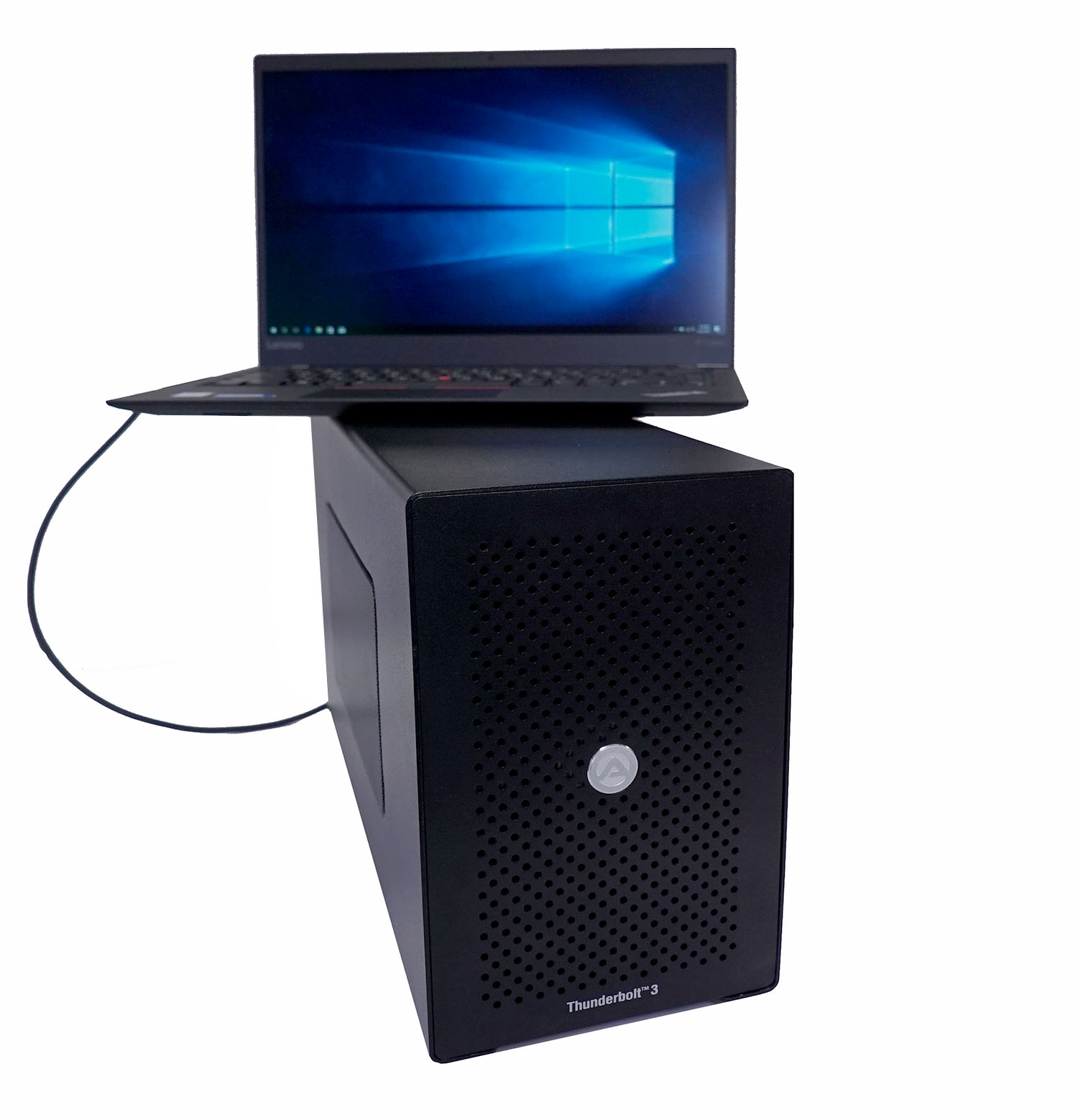 For our testing here, we used the Lenovo ThinkPad X1. This thin-and-light notebook features a 15W Intel Core i5-7300U processor, which is very common in these sorts of notebooks. Beyond that, is equipped with 8GB of RAM and a 256GB SSD, certainly a very nice notebook but not something you would ever attempt to game on.

For our games, we tested The Witcher 3, Hitman (in DX12 mode), and Dirt Rally all on 1080p at the maximum image quality settings.

Taking a look at our average FPS score, you would be quite impressed. It would seem that gaming on a low power notebook is finally possible!

Well, as we've learned over the years, average FPS is far from the entire story when it comes to gaming experience. As we ran through our initial testing, we found that games were extremely stuttery and difficult to play. So, we decided to take a closer look at things using our Frame Rating capture system for analysis.

As you would expect, our first culprit for a stuttery gaming experience was the low power CPU in the ThinkPad. To evaluate this, we decided to do something that no one would normally do – hook up a GPU over Thunderbolt to a high power gaming desktop.

In this case, we are comparing the GTX 1080 Ti on a Core i7-6900K-based system with the graphics card both installed natively and operating through the AKiTiO Node and the ASUS ThunderEX 3 expansion card installed into the X99 motherboard. 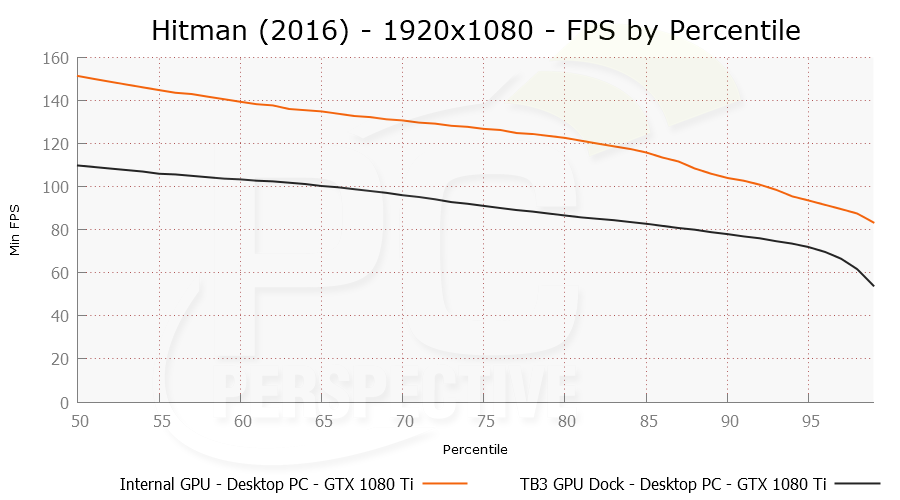 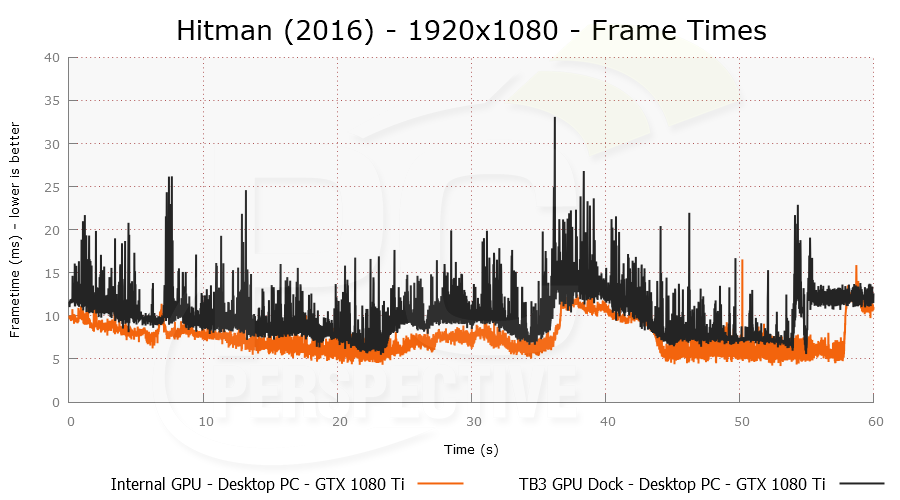 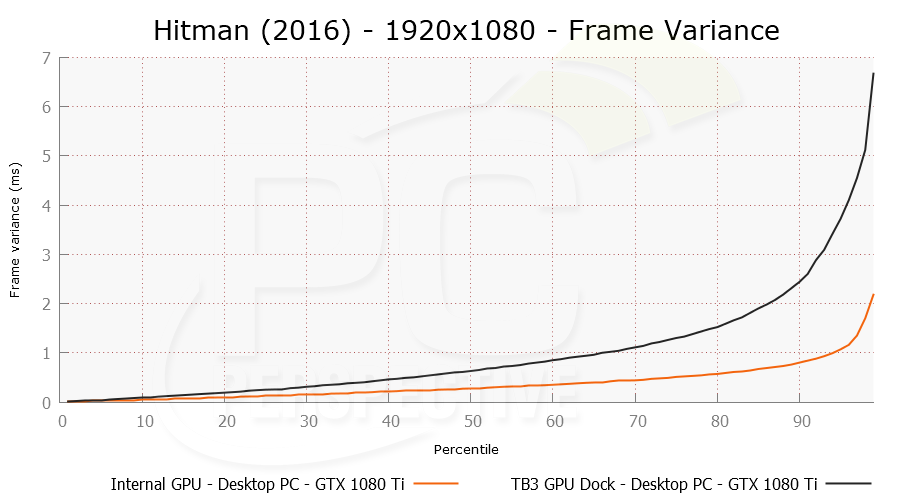 In Hitman, we see a difference of about 40FPS in the 50th percentile (average) metric across the 1080 Ti installed in the motherboard versus through Thunderbolt 3. Additionally, the frame time and frame variance charts show a significant reduction in smoothness when moving to Thunderbolt 3 for GPU connectivity. 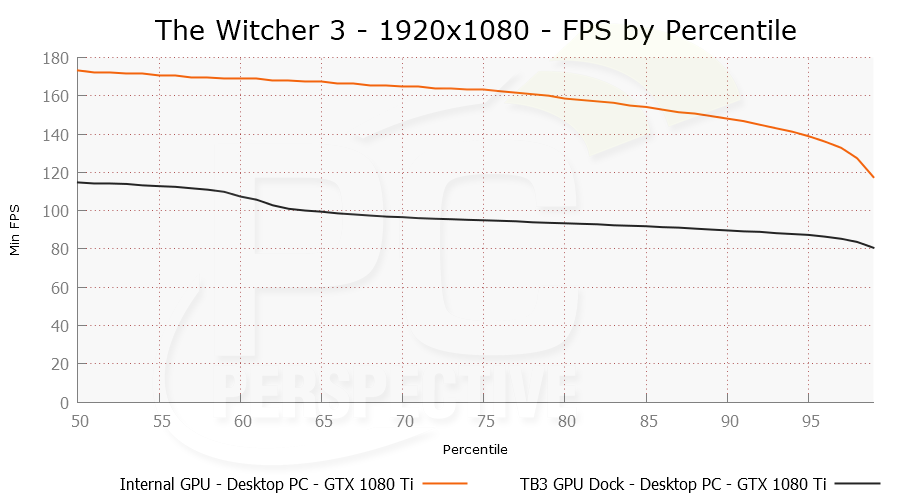 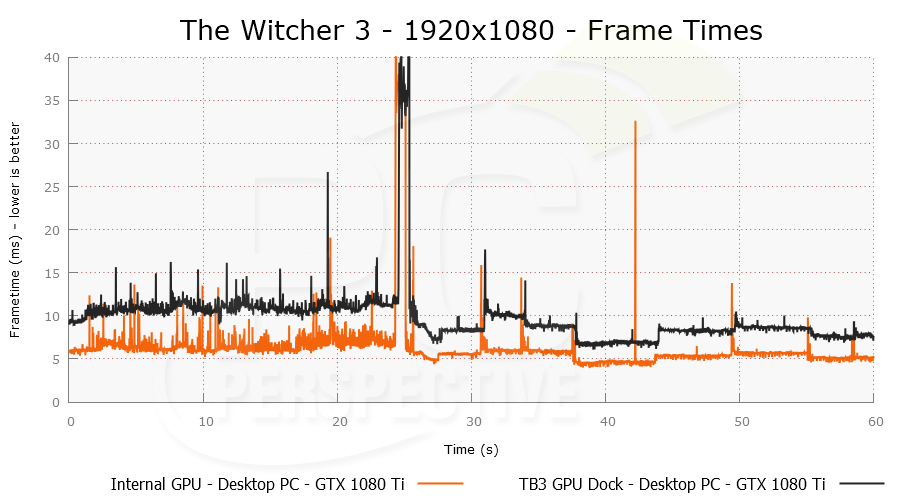 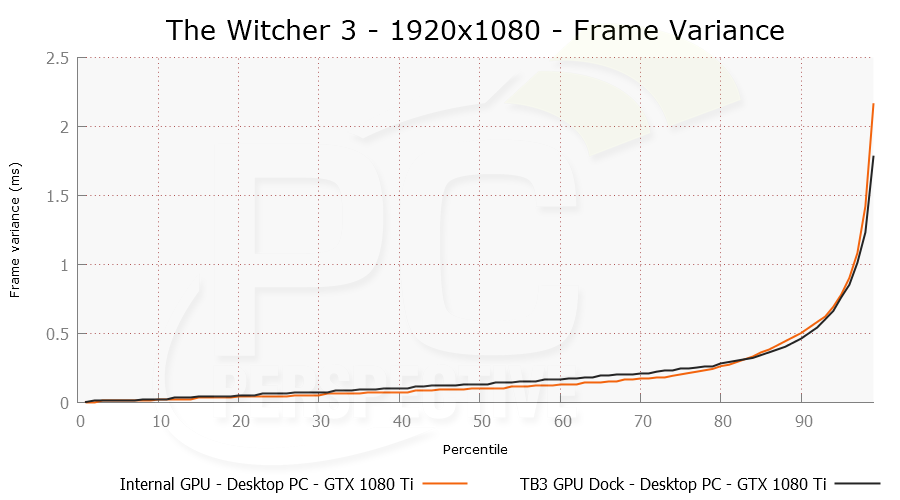 The Witcher 3 shows a similar difference in 50th percentile FPS, but the frame variance and frame times are much closer between the internal and external GPU configurations. 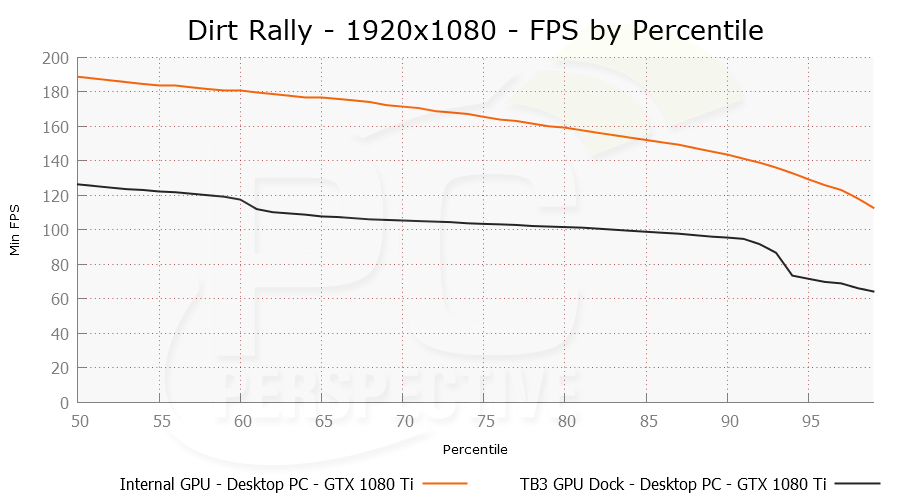 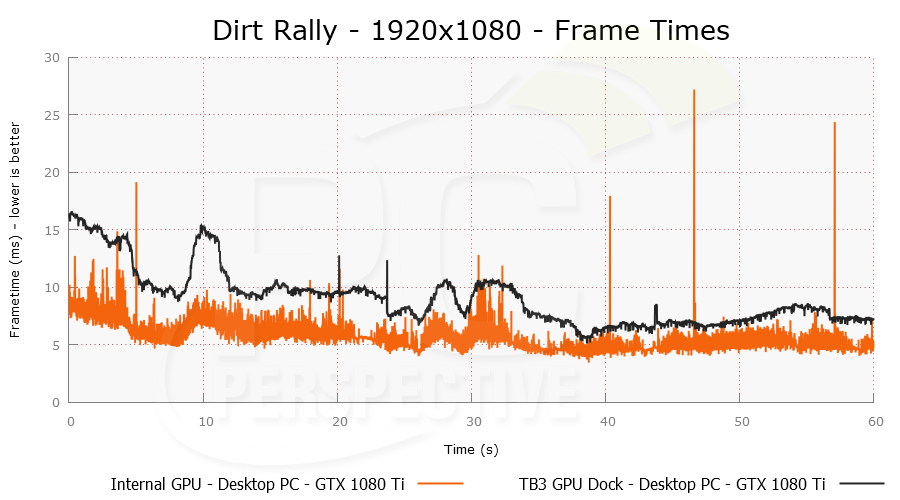 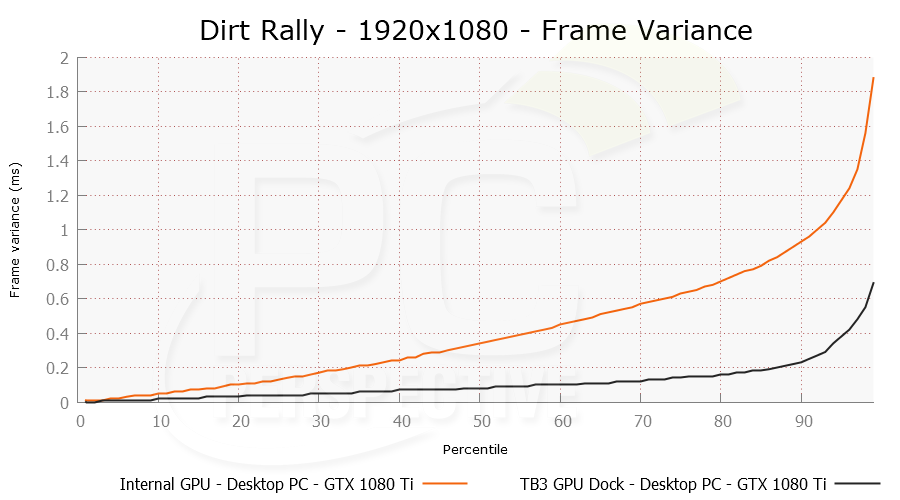 Dirt Rally shows a different side of the story. While the 50th percentile FPS is much higher on the internal GTX 1080 Ti configuration, the Thunderbolt configuration presents a much smoother gameplay experience.

Next, we decided to compare our Thunderbolt 3 results from the i7-6900K desktop to a more real world scenario with the Lenovo ThinkPad X1 Carbon with the same games and settings. 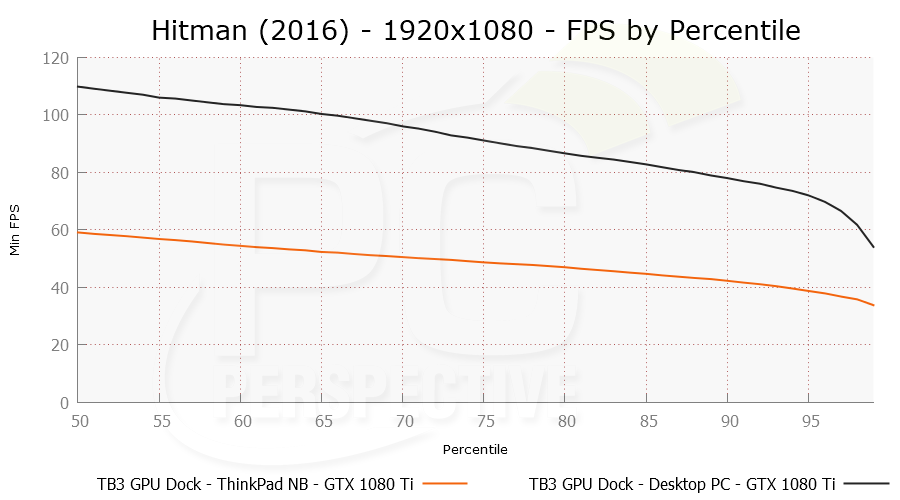 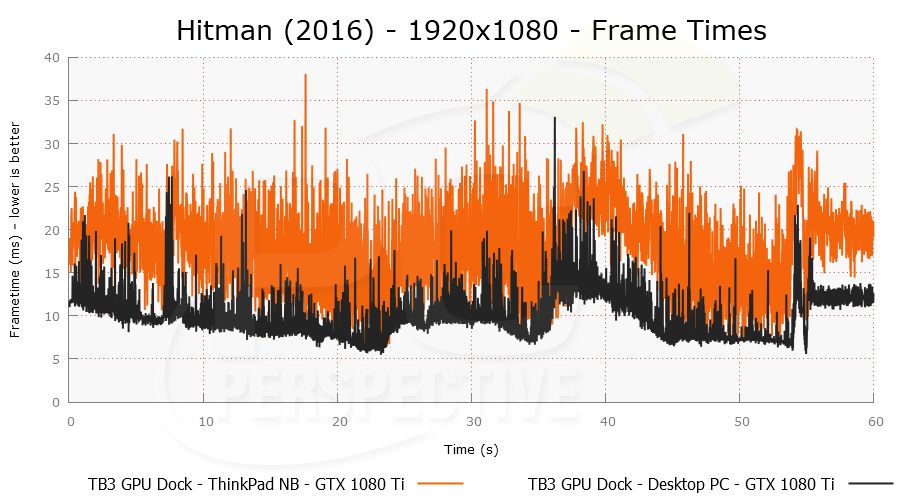 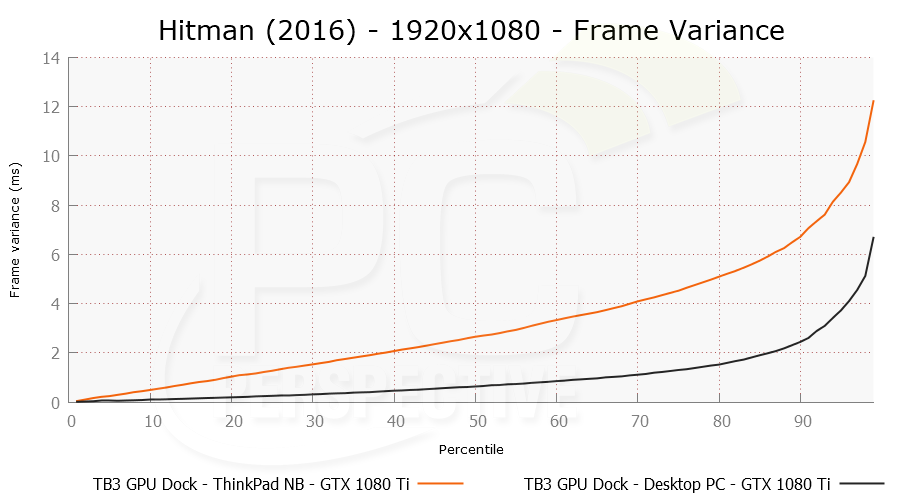 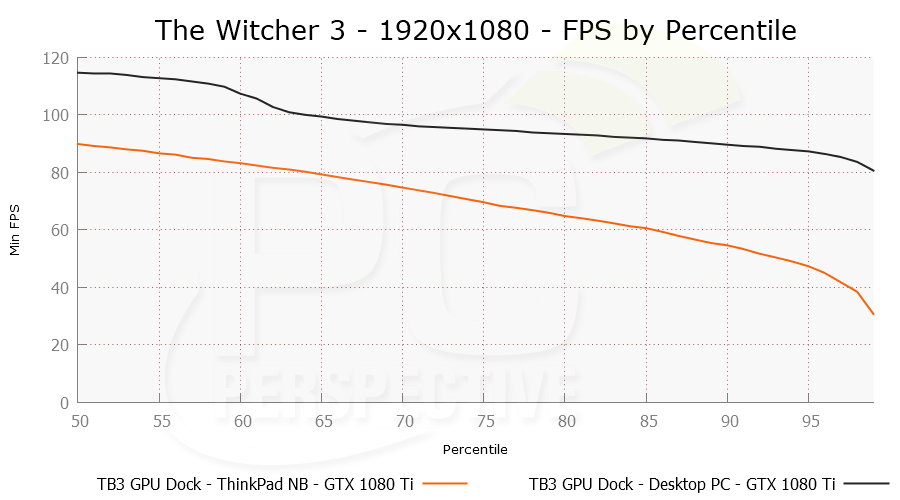 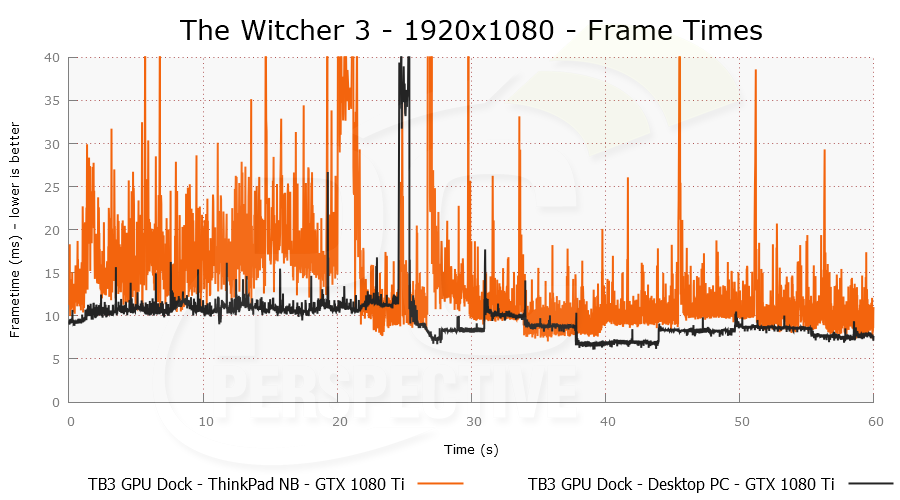 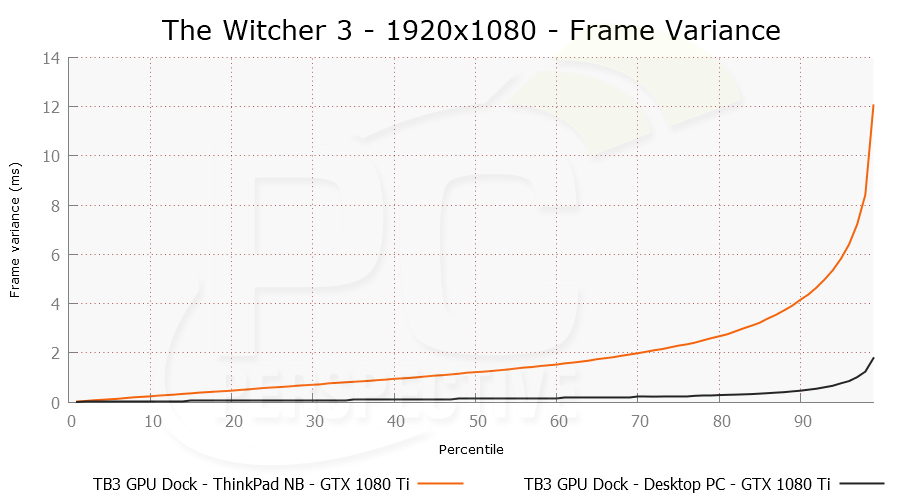 The Witcher 3 sees less of a gap in FPS by percentile going from the i7-6900K to the i5-7300U in the ThinkPad. However, the frame time chart shows major variance between these two different setups. Frame variance is better than we saw in Hitman, with the 90th percentile coming in at around 4ms. 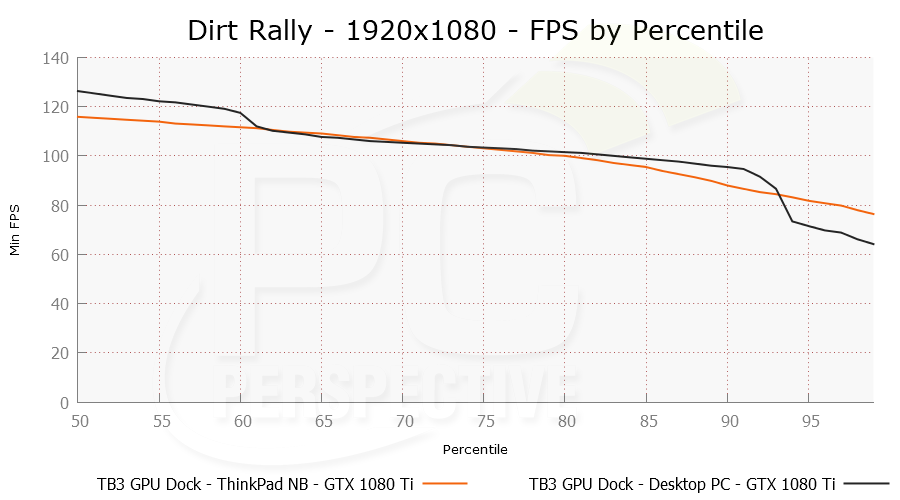 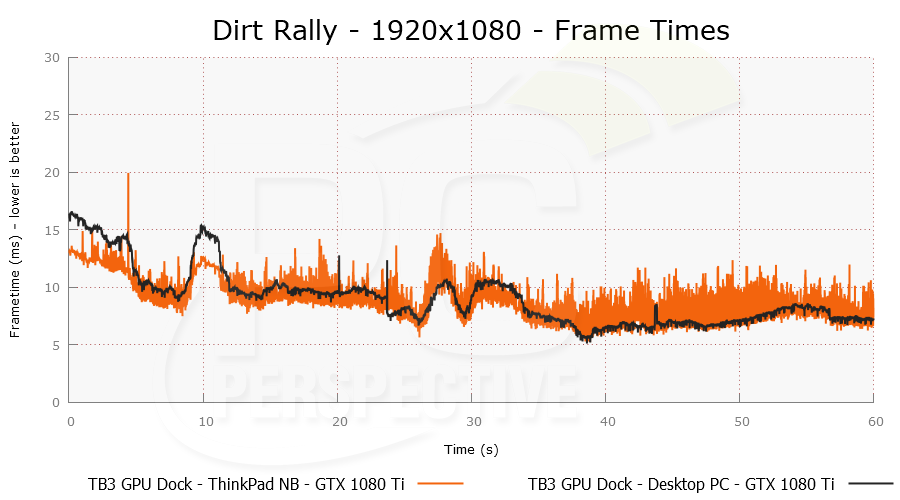 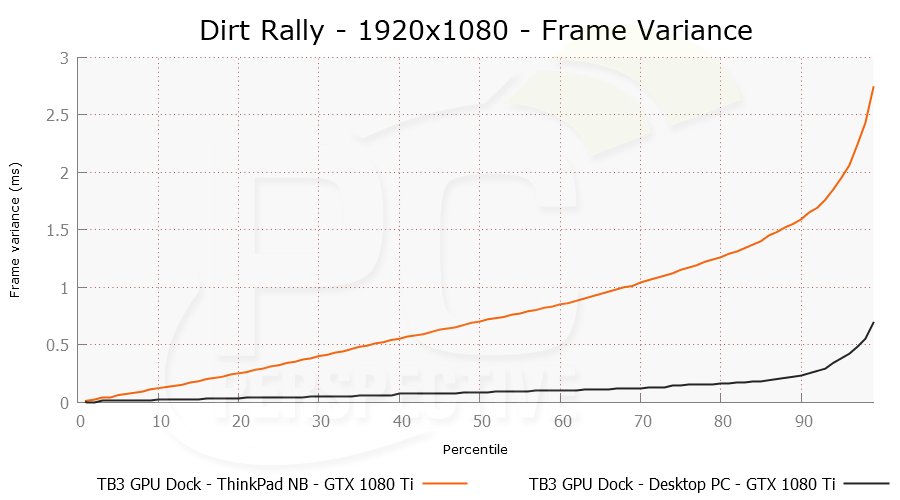 Dirt Rally is a much closer matchup of the two configurations. While we see more stutter on the ThinkPad, the frame variance stays well below the other two games we tested and is significantly more playable.