The MSI Core Frozr XL is not the first CPU heatsink to come out of that company but it is the largest, 150.4×170.0x129.8mm in size and a hair short of 2kg with the included fans.  The fancy plastic shrouds over the fans also act as the mounting point for the fans and can be adjusted to provide a little more clearance for tall DIMMs though it is still going to be a tight squeeze.  As the cooler is designed for AMD's new Ryzen chips, as well as some legacy chips, Neoseeker tested it against AMD's Wraith cooler and the AiO Ryzen cooler.  The MSI heatsink did much better at load, however when the system was idle the bundled coolers were a little better; though how often is your system on and idling anyways?

Check out this RGBeast here.

"The totally massive MSI Core Frozr XL benefits from a large nickel-plated copper thermal plate to quickly pull the heat away from the CPU. The heat then transfers from the thermal baseplate into the eight 6mm SuperPipes, which move the heat upward to the large aluminum dissipation fin array that can dissipate up to 250W of heat. Lastly, the two MSI 120mm Torx fans push-pull the heat away from all of that thermal mass and out of the computer case." 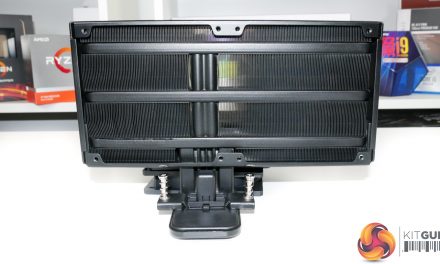