Overclocking with water cooling on the Vega Frontier Edition was a much better experience than with the air cooling setup. I did notice that AMD limits the maximum thermal temperature to 70C in Wattman, compared to 90C with the air-cooled card. When I asked AMD for the reason behind this change, they only stated that it was “because they can” due to the vastly improved cooling capability. While true, I would love to see this opened more for the RX Vega derivative as I do think it was holding us back a bit in our maximum overclock capability.

My result with overclocking was a 7% increase in clock speed while moving the power target up to 125% and setting the default fan speed to around 2000 RPM. (We tested this in 350-watt TDP mode, so the 125% power setting would take us to ~440 watts.) The fan on the integrated water cooler is excellent and running it at 2000 RPM was not enough to warrant interest in our office as to the sound coming from the GPU test bed. 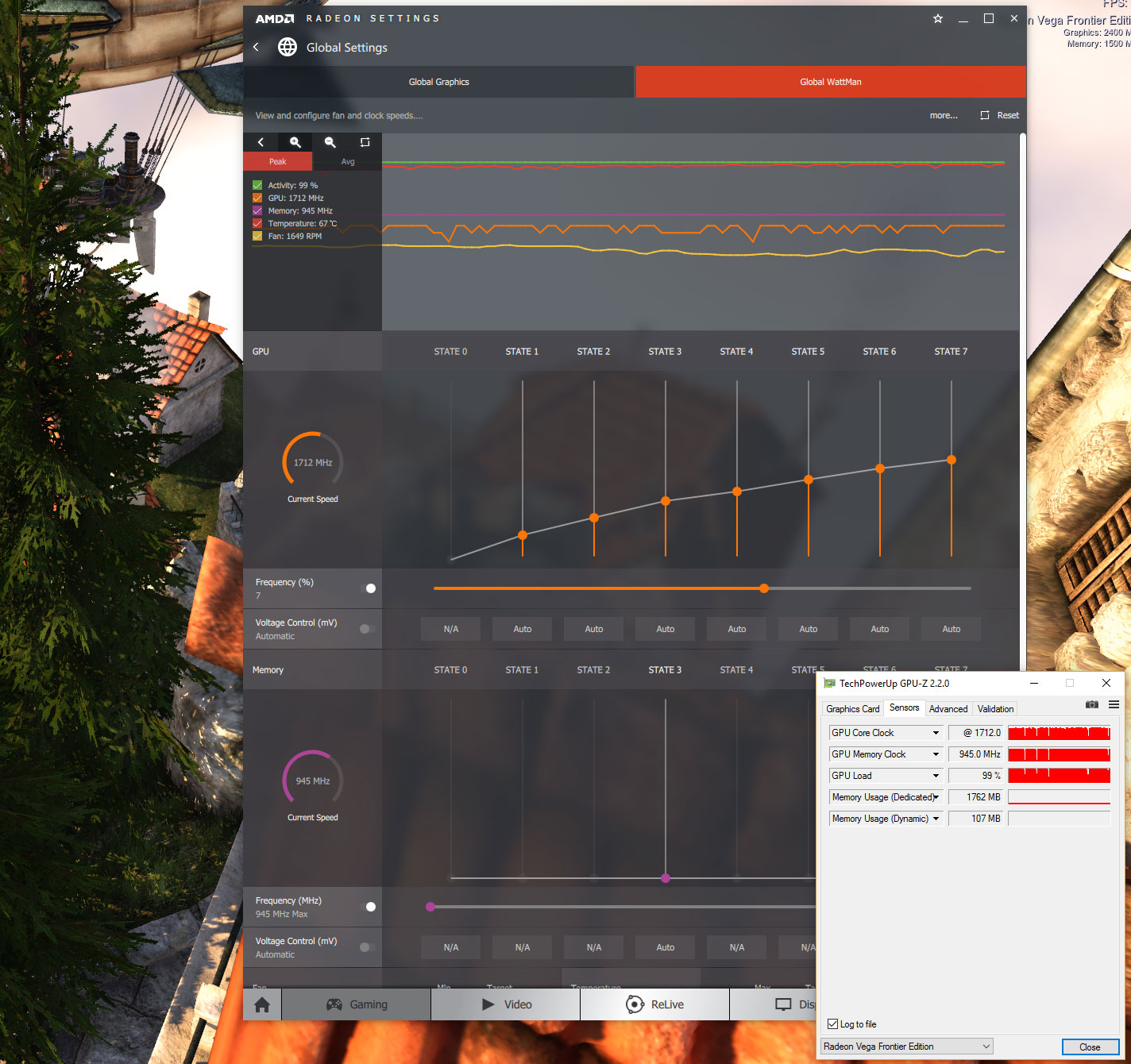 This gives us a “rated” clock speed of 1712 MHz, though we couldn’t hit it at a steady state; we still found oscillation to occur between that and the next lower step of frequency, 1637 MHz. 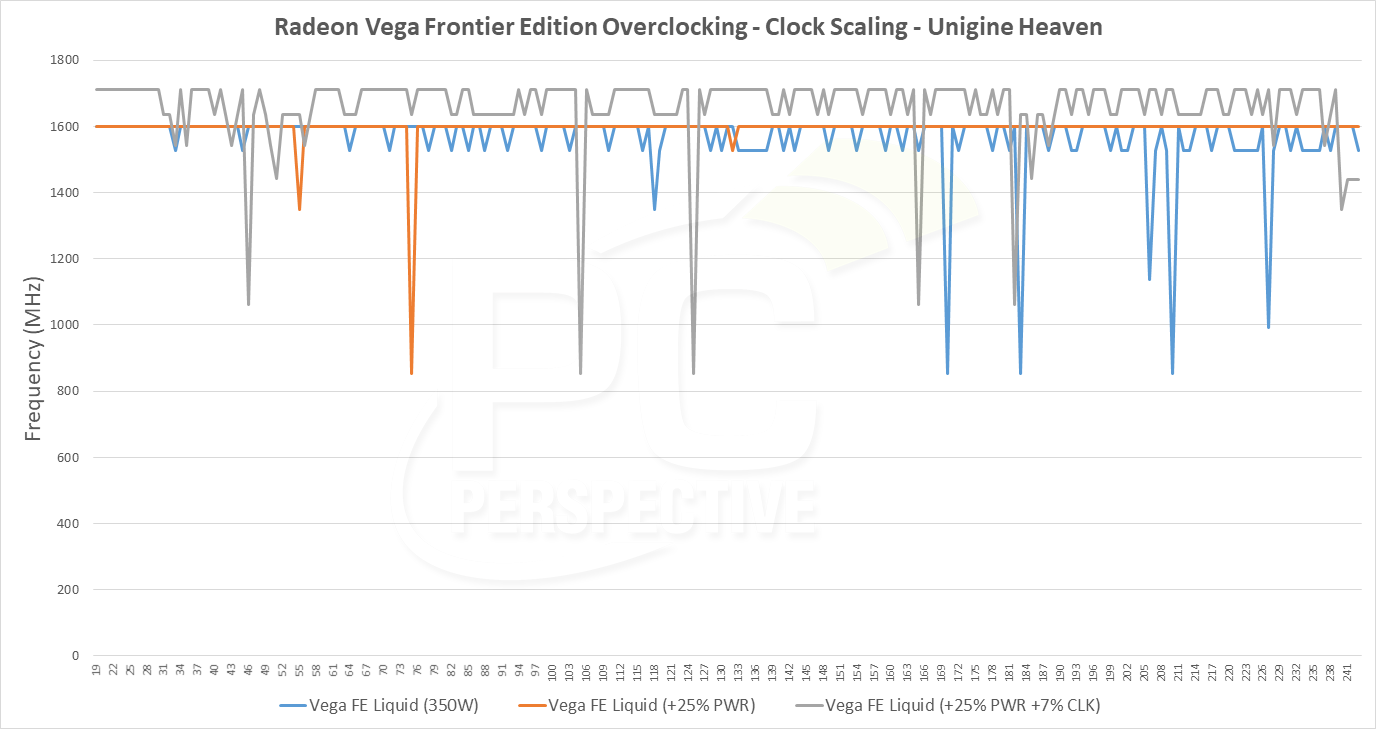 The graph above shows the added performance of the overclock and its impact on total clock speed. The card did exhibit better clock stability by simply moving the power target up to 25% without adjusting anything else in Wattman. This kept the clock at 1600 MHz throughout our testing, so it might be worth the modification for all users that want a less variant frame time experience. 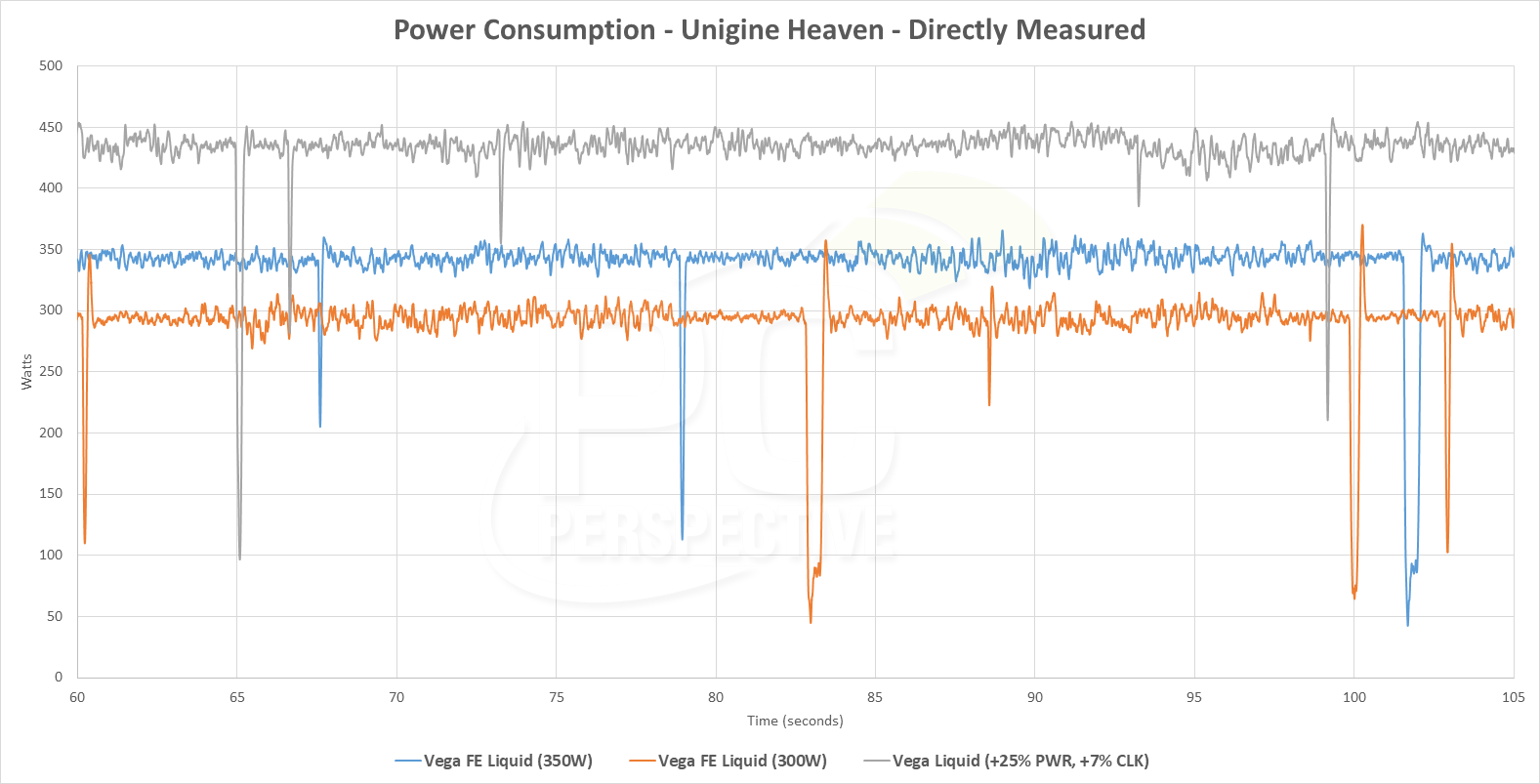 As expected, the additional power target of 25% moves the card to 440 watts of directly measured power…ouch! Clearly this is not a level that AMD is going to want to bring to the consumer even with the RX Vega branding, but it does indicate that there is headroom if you are willing to sacrifice power consumption and integrate an amazing cooling solution.

The primary data point from our testing of the AMD Radeon Vega Frontier Edition liquid-cooled card is that the performance delta between it and the air-cooled card were significantly wider than I expected. We measured improved average frame rates that were 10%+ higher with the card in its 350-watt setting, which I expect most consumers to use, the vast majority of the time. At 2560×1440 there were a handful of instances that show only single digit increases, but that was infrequent. As a result, the Vega FE liquid card is much more capable of competing with the GeForce GTX 1080 in our gaming tests, coming within a few percent in most tests (taking away GTA V) and taking the lead in Dirt Rally. Considering my mostly negative outlook on the Vega product family after reviewing the air-cooled card, the liquid cooled version shifts the landscape again.

Which leads to the real question: what does this mean for the upcoming RX Vega product? While I know that testing the Frontier Edition in ONLY gaming is a bit of a faux pas, much of our interest was in using this product to predict what AMD is going bring to gamers later this month. It is apparent now that if the clocks are in the 1600 MHz range consistently, rather than dipping into 1400 MHz and below states as we found with the air cooler at stock, Vega in its current state can be competitive with the GeForce GTX 1080. That’s an upgrade over where it stood before – much closer to GTX 1070 performance.

The question is then can AMD provide that type of gaming experience at the $499 price point and will it require liquid cooling to do so? AMD probably isn’t holding back on some magic air cooler performance tricks it might have for RX Vega, so I don’t expect performance and clock consistency to change much. BUT, board partner cards that don’t design only for blower-style integrations will likely be able to add a lot of RX Vega performance and capability. This is clearly an instance where a better cooling solution can make a dramatic impact; in recent years and with current GeForce cards that isn’t the case. I do think we will see a liquid-cooled version of RX Vega but at a higher cost because of the complexity of the design used here. We might also see that HBM2 memory clocked up another 100 MHz or more, boosting things ever so slightly.

As for there being no professional tests in this review – I apologize for the time constraints. I tried to run LuxMark on this card in both 300 and 350-watt modes and it soft rebooted the system multiple times in each mode. Not sure what is going on there but I have inquiries in with AMD and will be doing more investigation on our side. Once stable, I would expect the same ~10% improvement in performance moving from the air-cooled Vega to the 350-watt water-cooled version.

Despite the added performance, the Frontier Edition pricing scale leaves a lot to be desired. You are going to shell out $500 more for this version of the card, netting you at most 15% added performance for 50% added cost. Yes, the cooling solution design is impressive, and the card maintains an under 65C temperature in our testing at stock settings under full load, but it’s a steep price to pay. If the cooler really DOES cost enough to warrant that change, then it’s bad news for the potential for a water-cooled RX Vega card and its ability to stay within a reasonable price window to compare to GeForce products.

Before doing this testing, I had dismissed the liquid-cooled version of the Vega Frontier Edition completely, but the performance and improvement in clock rate/temperature we saw today gives me hope that RX Vega will be able to turn in a better-than-expected performance when it hits the scene. There are still plenty of ways that AMD could drop the ball, but if they can launch RX Vega at similar performance to the GTX 1080, as we saw here with the card in its 350-watt state, and prices it correctly, there will be a line up for buyers. And that is despite the obvious power efficiency disadvantage that AMD will have to accept.

We’re only weeks away now folks – time to see what AMD has been building up for.