While we are all eager to see how the gaming performance of the Vega Frontier Edition liquid-cooled option compares to the air-cooled, I first want to dive into the different power settings and how the clock speeds of the Vega GPU are affected by the better cooling. As I mentioned above, the out-of-box setting on the card switch is toward the display connectors, in the 300-watt configuration. Moving the switch to the right, and then rebooting, puts it in the ~350-watt configuration, though there is no software indication that the change has been made, which would be a welcome addition. 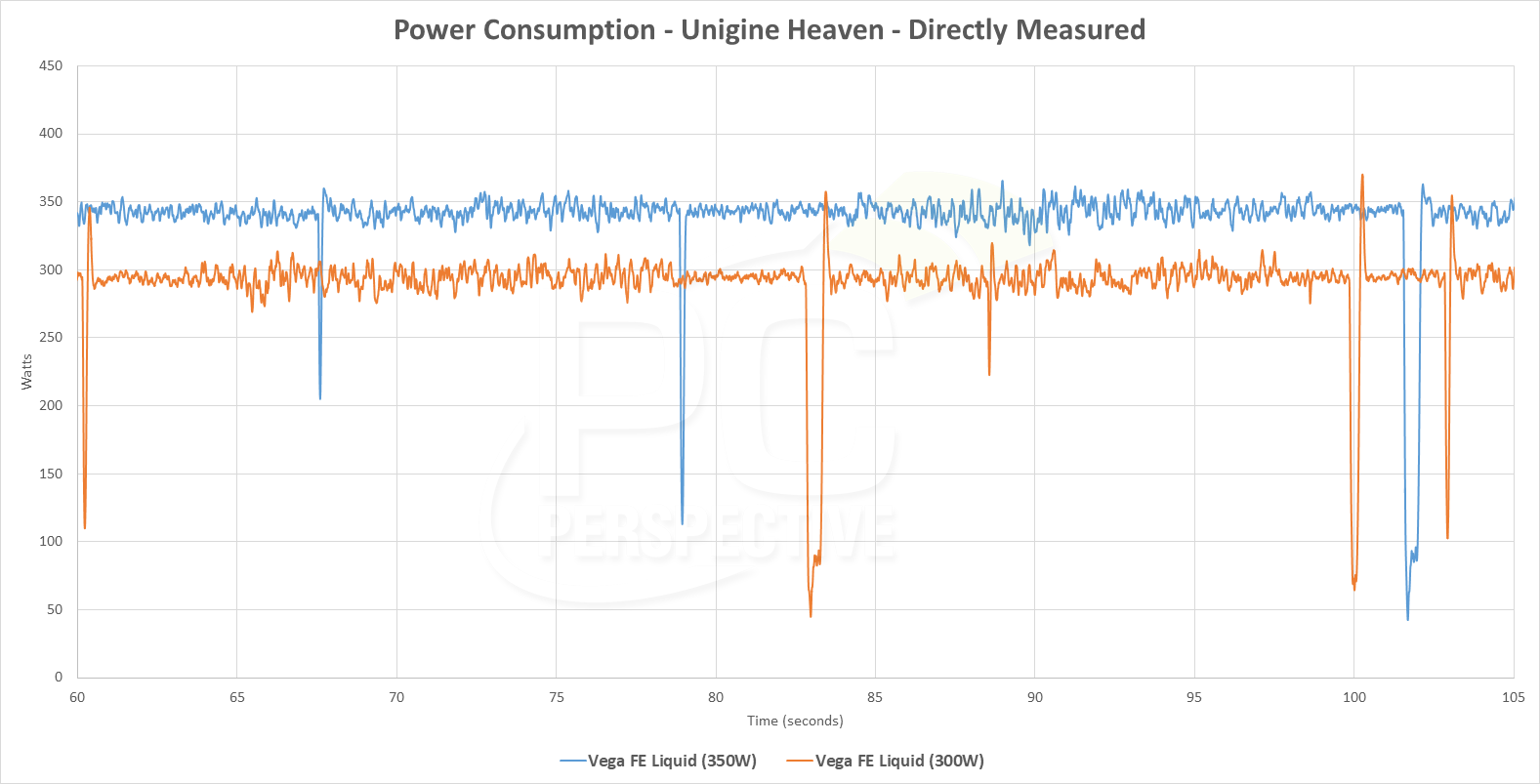 The power draw of the card in its 300-watt setting is basically identical to that of the Frontier Edition air-cooled offering, within 5 watts. When flipped to the different configuration, the power jumps up to just under 350 watts on average. 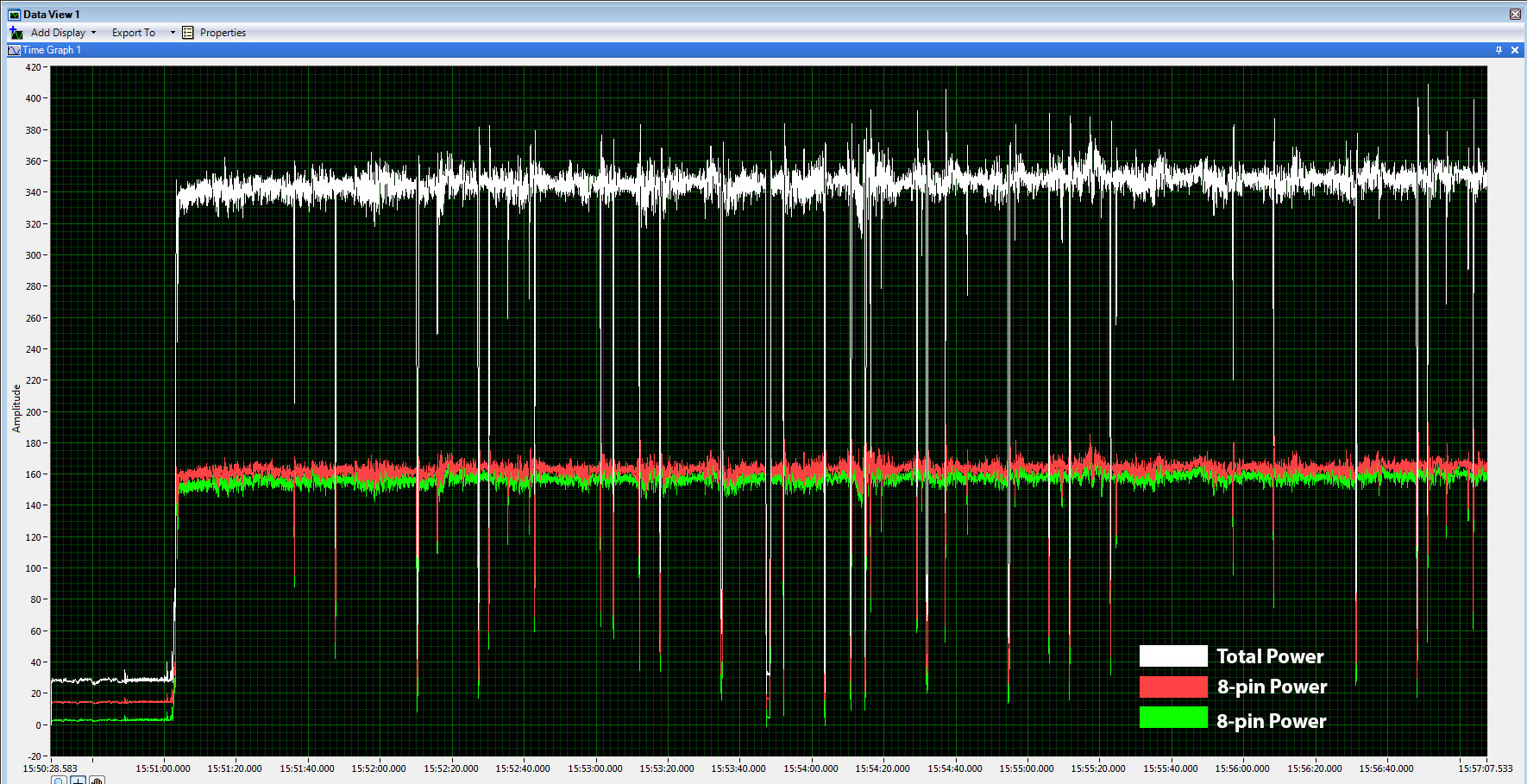 The reason AMD did not go up to 375 watts with this second setting was to avoid having the 8-pin connectors cross their limitations. The above screenshot shows the 8-pin auxiliary lines going JUST up to the limit, around 150 watts. In our testing, the power through the motherboard slot only goes up to 30 watts with the Vega FE, telling me that perhaps AMD overcorrected after the RX 480 issues. Taking that up to 60 watts would have given AMD the ability to scale to 375 watts in the higher switched configuration. 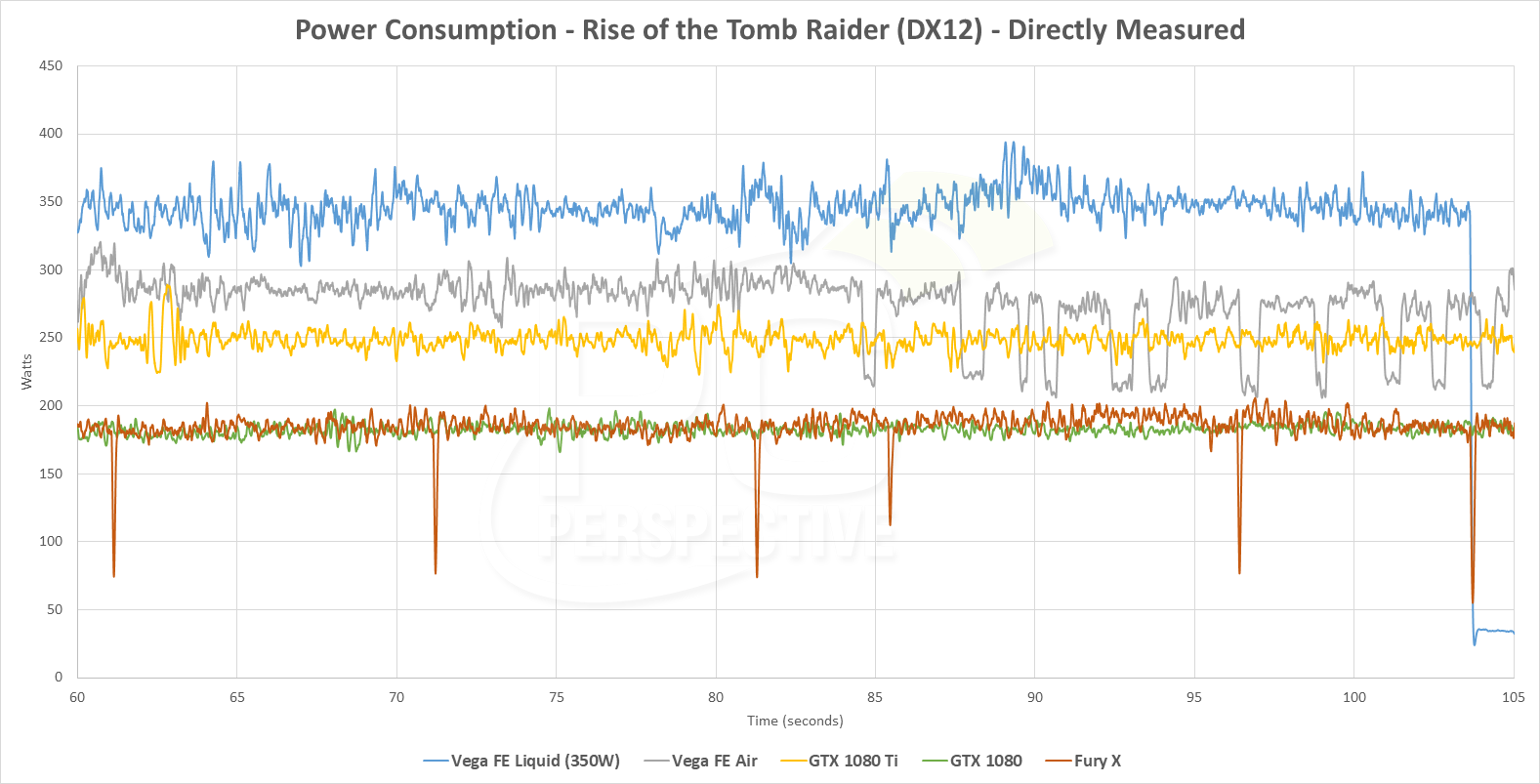 Because I think that most readers that are reading a review of a card like this and then decide to purchase one would move that switch immediately to the 350-watt setting, I’ll focus on that for power testing. In Rise of the Tomb Raider the Vega FE Liquid pulls around the 350-watt mark, compared to 290 watts for the air-cooled Vega FE and 250 watts for the GTX 1080 Ti. It’s worth remembering for performance testing that the GTX 1080 is in the ~180-watt range. 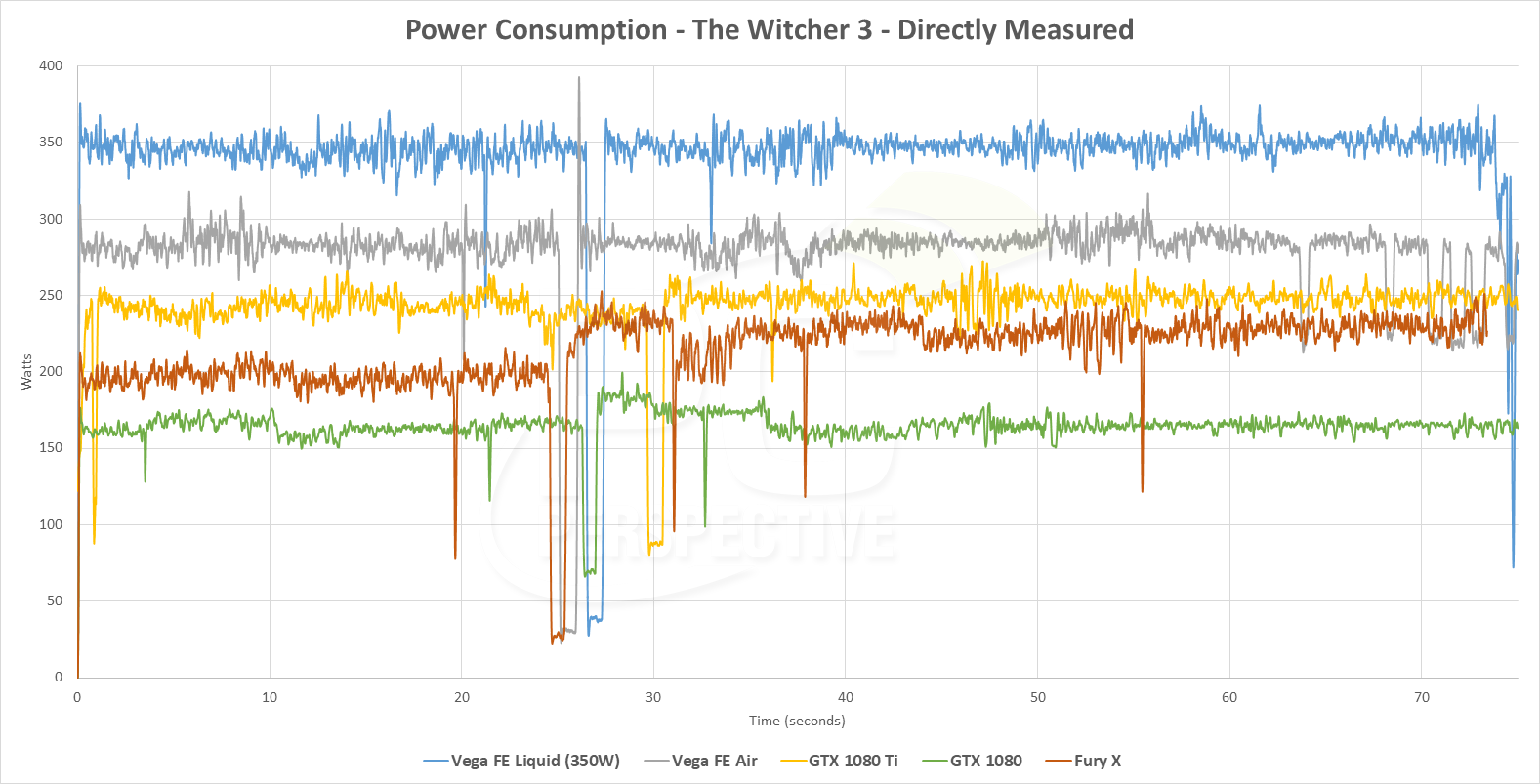 What does that added power of the liquid-cooled variant of the Vega Frontier Edition net you in real clock speeds during gaming workloads? 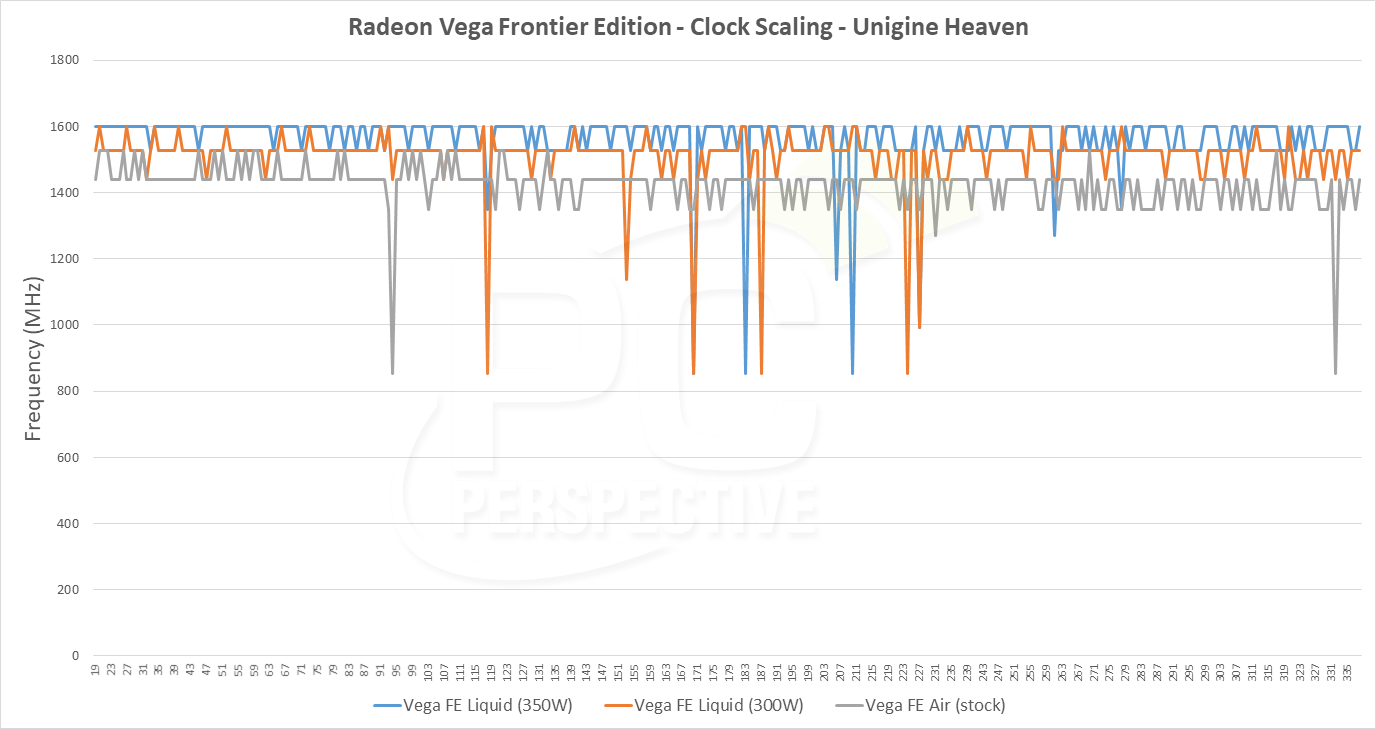 The progression from air, to liquid, to liquid at the higher TDP is clearly visible in this graph. At stock settings and running near 350 watts, the Vega Frontier Edition card hits its target 1600 MHz reliably, though bouncing between that and 1528 MHz. At the 300-watt setting, the liquid-cooled card oscillates at 1528 MHz and 1440 MHz, with the occasional spike at the 1600 MHz mark. Meanwhile the air-cooled Vega FE we tested a couple of weeks back sits in the 1440-1348 MHz range.

There is a clear benefit to water cooling this card – the lower temperature gives the card the ability to reach high clocks and in a more stable fashion.

I know that many of you are going to be interested in the overclocking results we found with the liquid-cooled variant after this information above, but it’s best presented after the performance results at stock (but various) settings. If you must jump ahead to the overclocking page, you can do so here.