Battle for the Mainstream

We take a look at the AMD Ryzen 3 processors launching today.

With today's release of the Ryzen 3 processors, AMD completes the circle of the mainstream Ryzen processor family. Starting with the 8-core Ryzen 7 that disrupted the high end of the market, followed by the Ryzen 5 that shook up the Core i5 segment, Ryzen 3 goes after the world of the Core i3 targeting budget PC builders, gamers, and even enterprising business consumers willing to build their own machines or looking for information here on what to select.

We already learned about the Ryzen 3 products launching today, the 1300X and the 1200, from a video that AMD CEO Lisa Su posted a couple of weeks ago. But pricing and performance were still an unknown, both of which we are going to show you in great detail today. What can a $129 and $109 processor get you with four true cores? 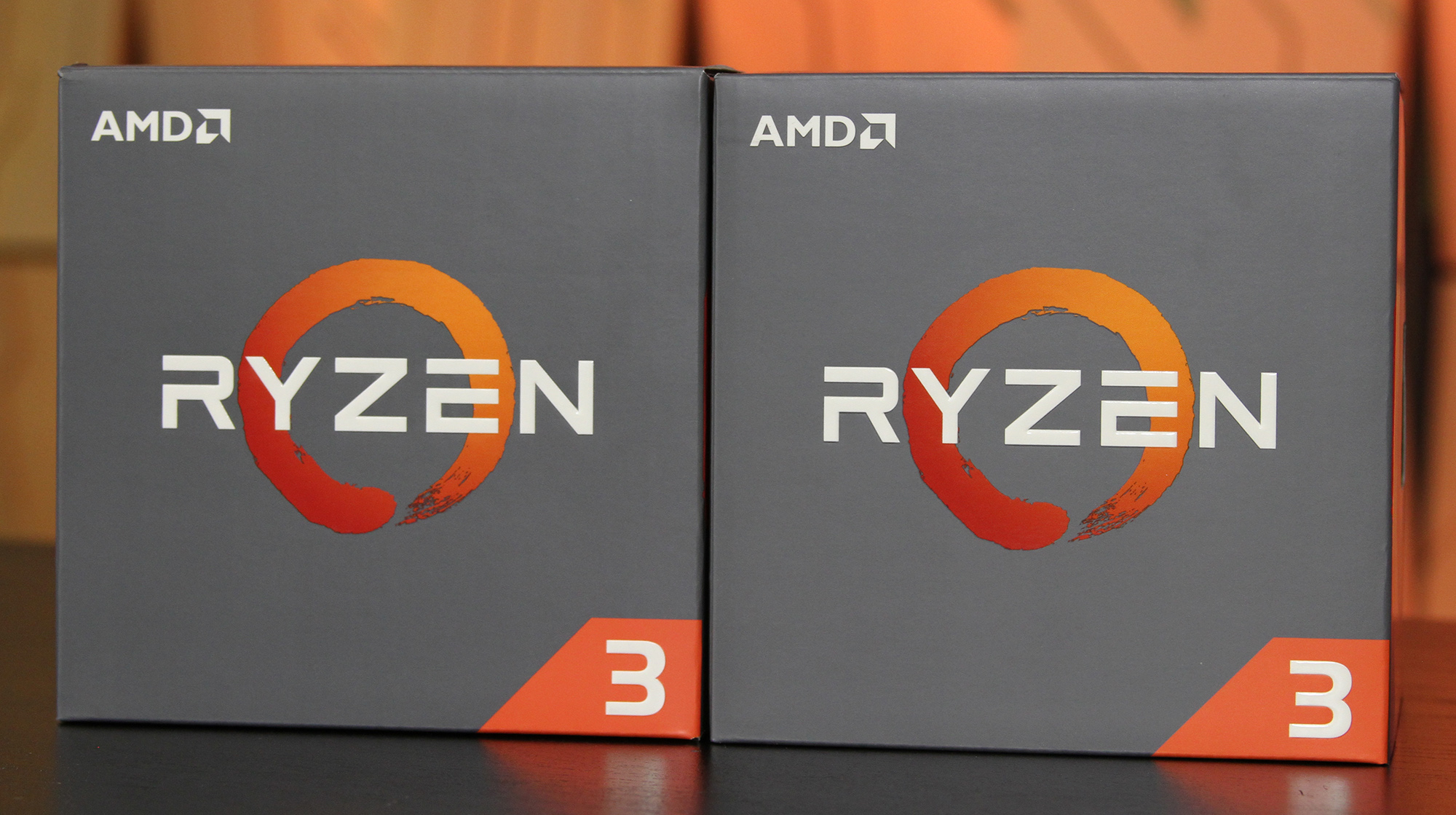 As you'll soon see, the Ryzen 3 product family competes against the Intel Core i3 line in terms of pricing but is definitely a concern for the Core i5 family when it comes to multi-threaded workloads. Let's dive into the specifications and see what AMD has put together for us.

The devil is in the details and as we will see the core counts and clock speeds of Ryzen 3 make it very compelling for a wide range of consumers.

Both the Ryzen 3 1300X and the Ryzen 3 1200 are four-core, four-thread CPUs, marking the first time we have seen a Zen-based design not utilize the company's implementation of SMT. AMD made the decision to target the Core i3 family that largely uses dual-core HyperThreaded configuration with a "four true core" mentality, counting on the ability of native cores to scale better than Intel's SMT implementation. Intel's advantage lies in both IPC (instructions per clock) and that the Core i3 processors all hit much higher frequencies than the Ryzen 3 equivalents. The Core i3-7350K for example runs at 4.2 GHz so that even without Turbo technology, it will be running 500-1000 MHz faster than the Ryzen solutions across the board.

The Core i3 and even the Core i5 CPUs we are looking at today max out at DDR4-2400 for officially memory speeds, and the Ryzen 3 CPUs will hit DDR4-2400 officially with easy jumps to higher clock rates like DDR4-3200. Because of the fabric interconnect differences between the Ryzen and Core i3/i5 processors, that additional memory speed actually means quite a bit more to the AMD hardware; something we have observed and commented on many times in the recent past.

TDP is an interesting discussion as both Ryzen 3 parts are labeled as 65 watts. Actual measured power draw wasn't so homogenous and in our previous Ryzen testing. The required power draw for Ryzen exceeds that of equivalent Intel hardware. The Core i5 CPU has a TDP of 65 watts but the Core i3 processors only claim 60-51 watts of power. 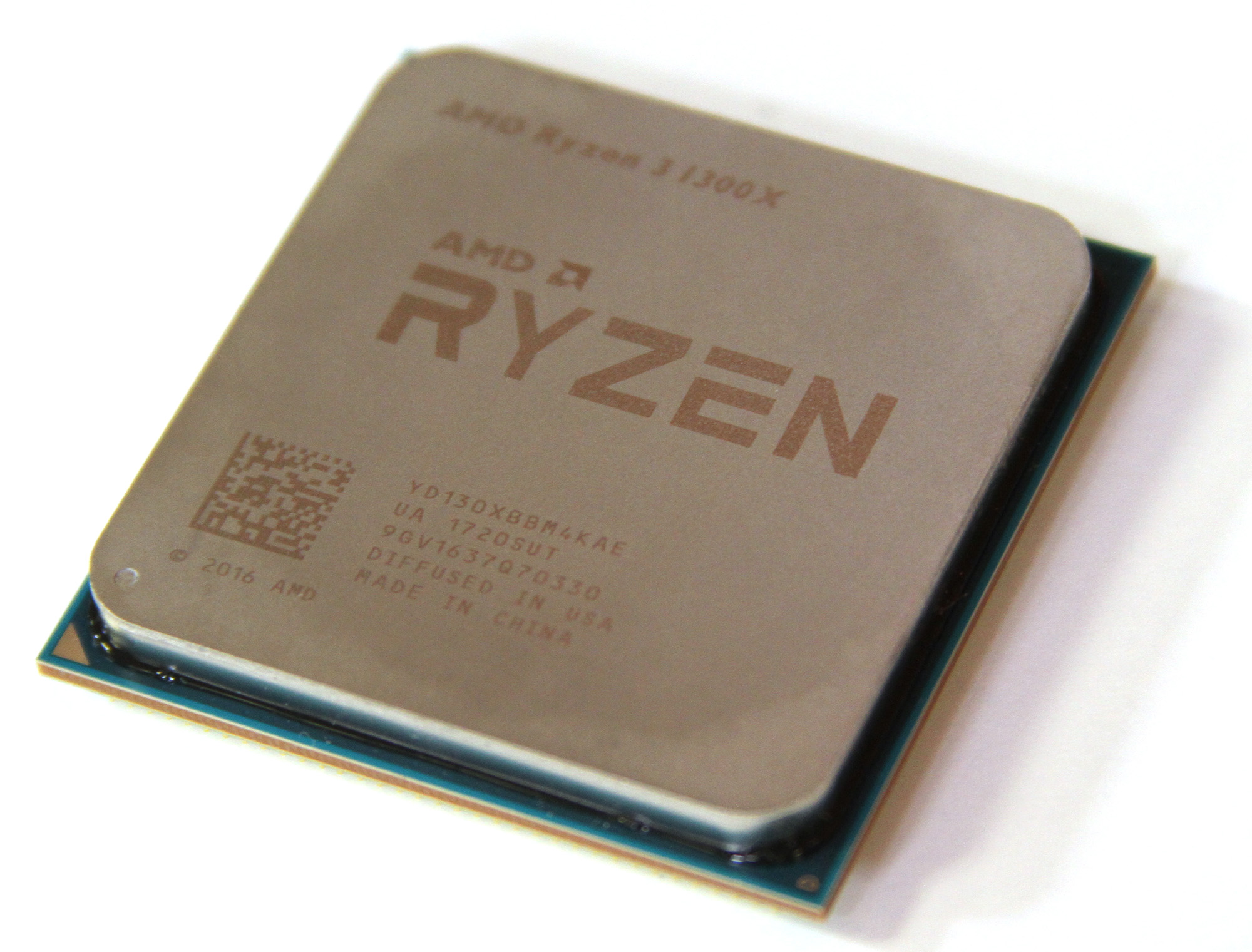 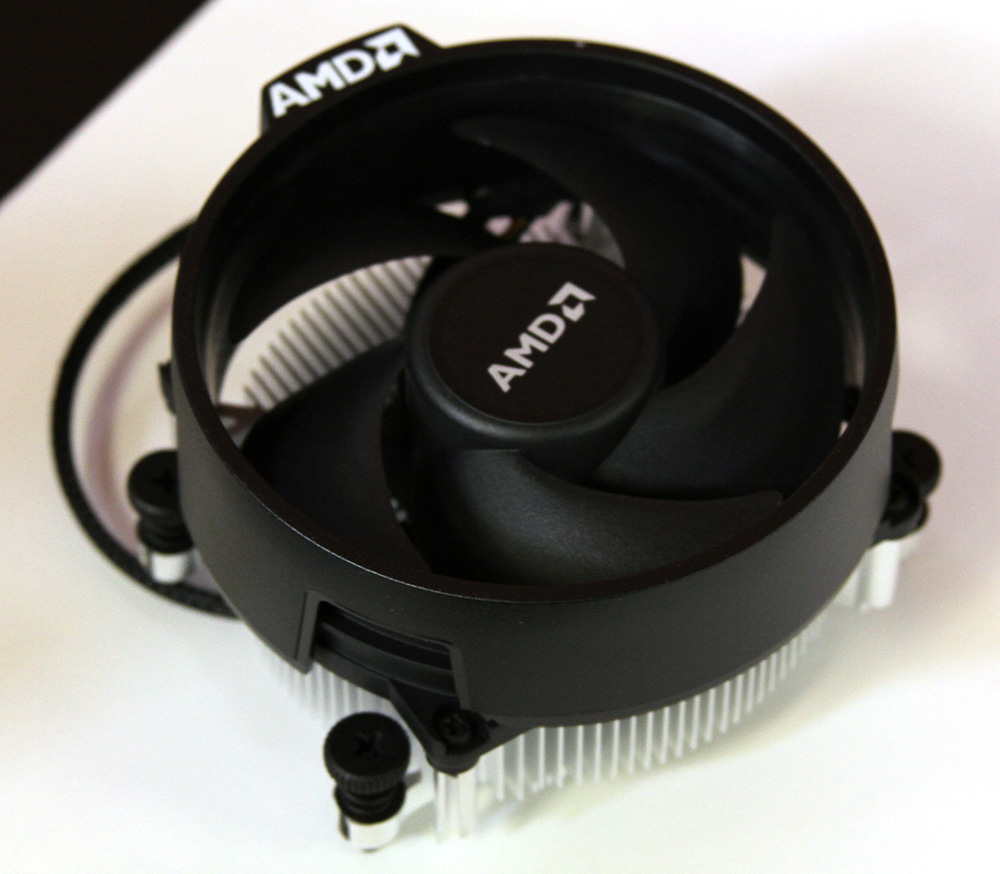 Both of the Ryzen 3 retail boxes will ship with a Wraith cooler in the box.

The AM4 socket remains unchanged as do the platforms that Ryzen 3 can operate in. The X370, B350, and A320 chipsets can all run the Ryzen 3 hardware though because of the pricing scheme, its likely we would only see buyers use A320 or B350 motherboards in these builds.

For those of us on a budget, a Ryzen 3 CPU with an A320 motherboard (which range in the ~$60 area) can provide a great value. Compared to the higher end chipsets, the A320 lacks multi-GPU support and CPU overclocking capability - if you aren't interested in getting your hands dirty with settings adjustments, the A320 will offer the same memory and performance capability while saving you $20-30 over matching B350 offerings. (Note that while CPU overclocking is locked out of A320, memory overclocking and XFR are still supported.)

Though I had no inclination that this area of interest would change or shift with Ryzen 3 compared to the Ryzen 7 or Ryzen 5 hardware, we ran the core-to-core latency application on the Ryzen 3 1300X CPU to see if it fell in line with expectations. 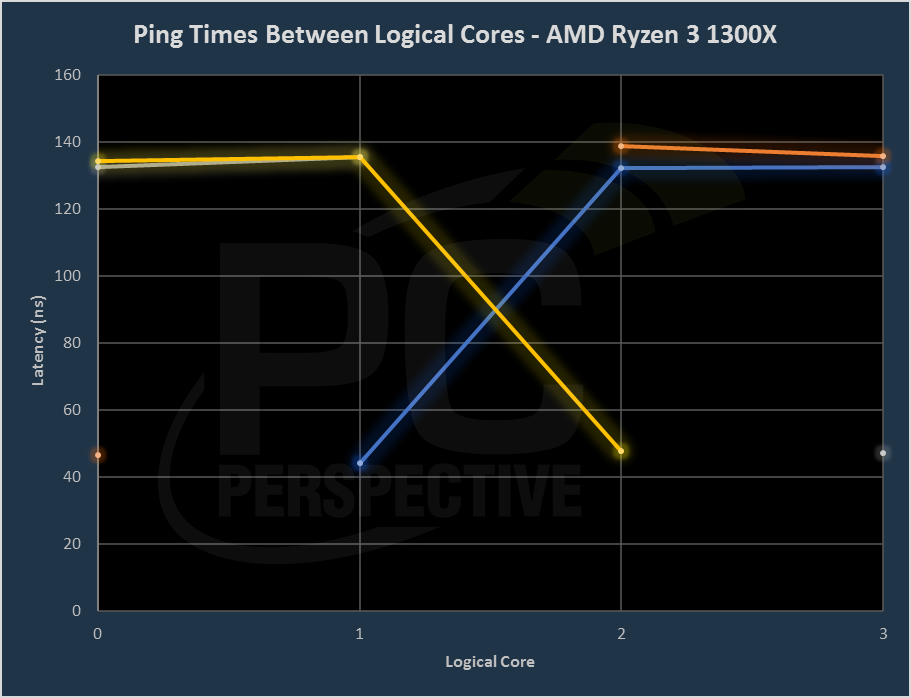 The results are where I thought they would end up - when running the memory at 2400 MHz (the same we used as default with Ryzen 7/5), the CCX to CCX latency creeps past the 130ns mark. Because of the four core configuration we have a pair of discrete cores on each CCX enabled, showing us the lower, expected latency timings when communicating across the same CCX.

Performance expectations for workloads like 1080p gaming based on this data should be very similar to the Ryzen 5, which was also two cores per CCX, though with SMT enabled. 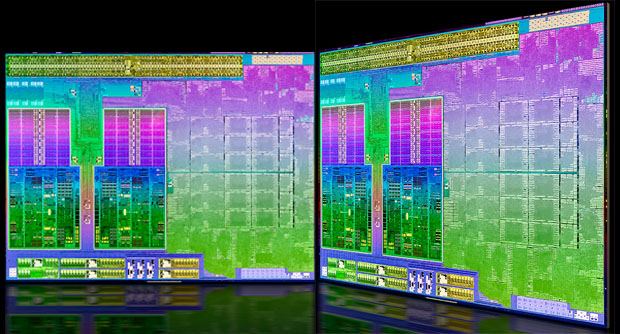