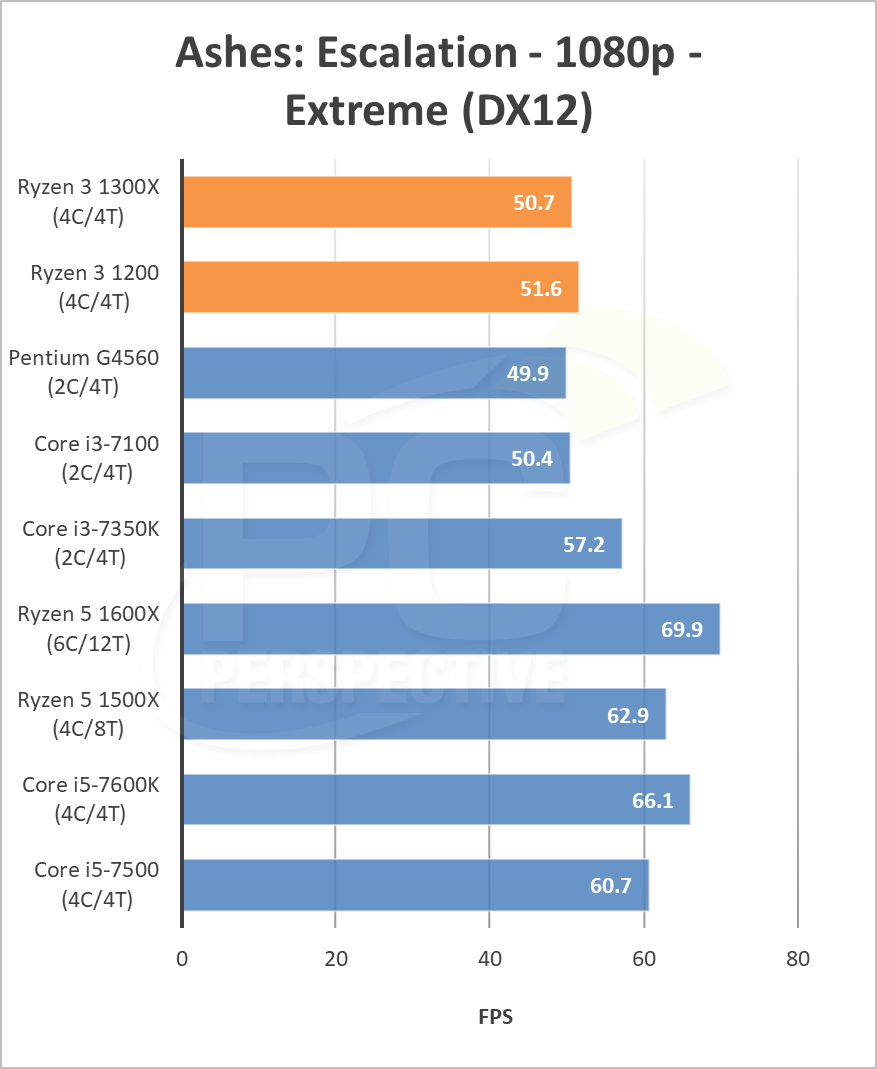 Though Ashes of the Singularity is a very heavily threaded game, it still has dependency on single threaded IPC and of course, core to core communications. The Ryzen 3 processors do well enough here, matching performance of both the Pentium G4560 and the Core i3-7100. 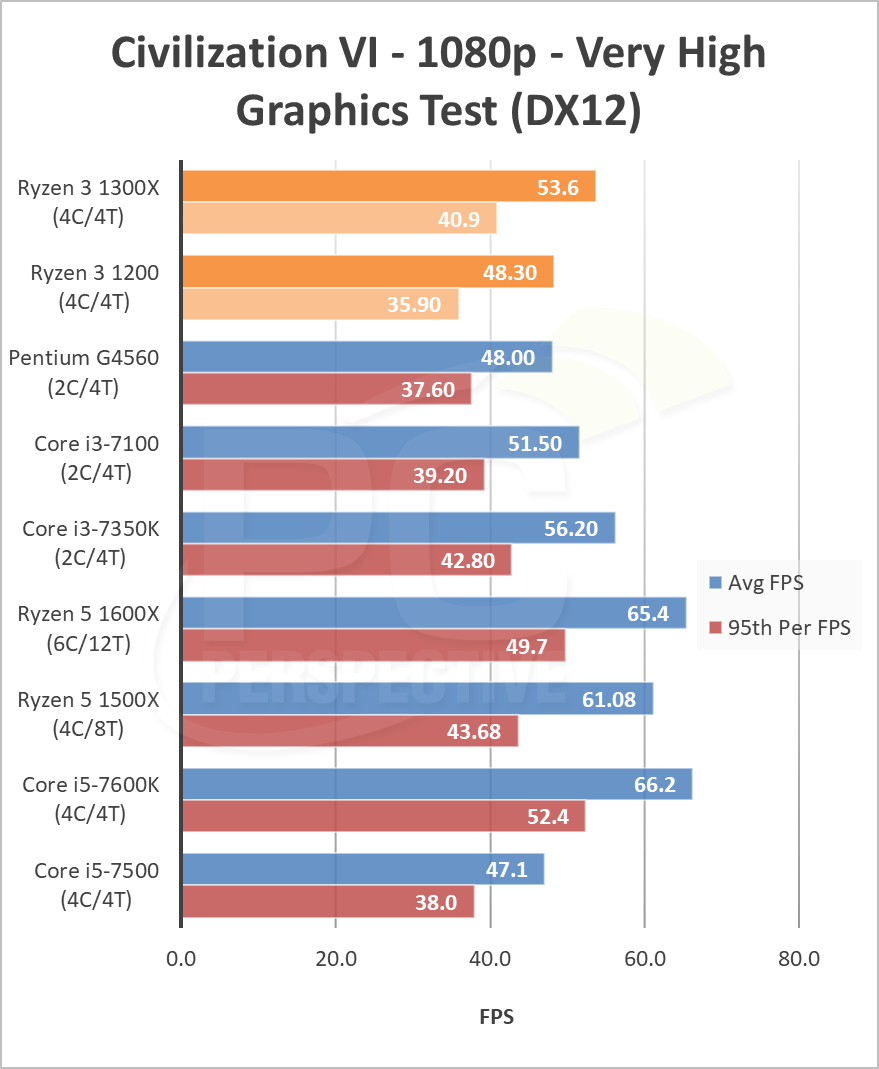 Even at 1080p, the performance between these platforms is identical, showing very little CPU to CPU variation. 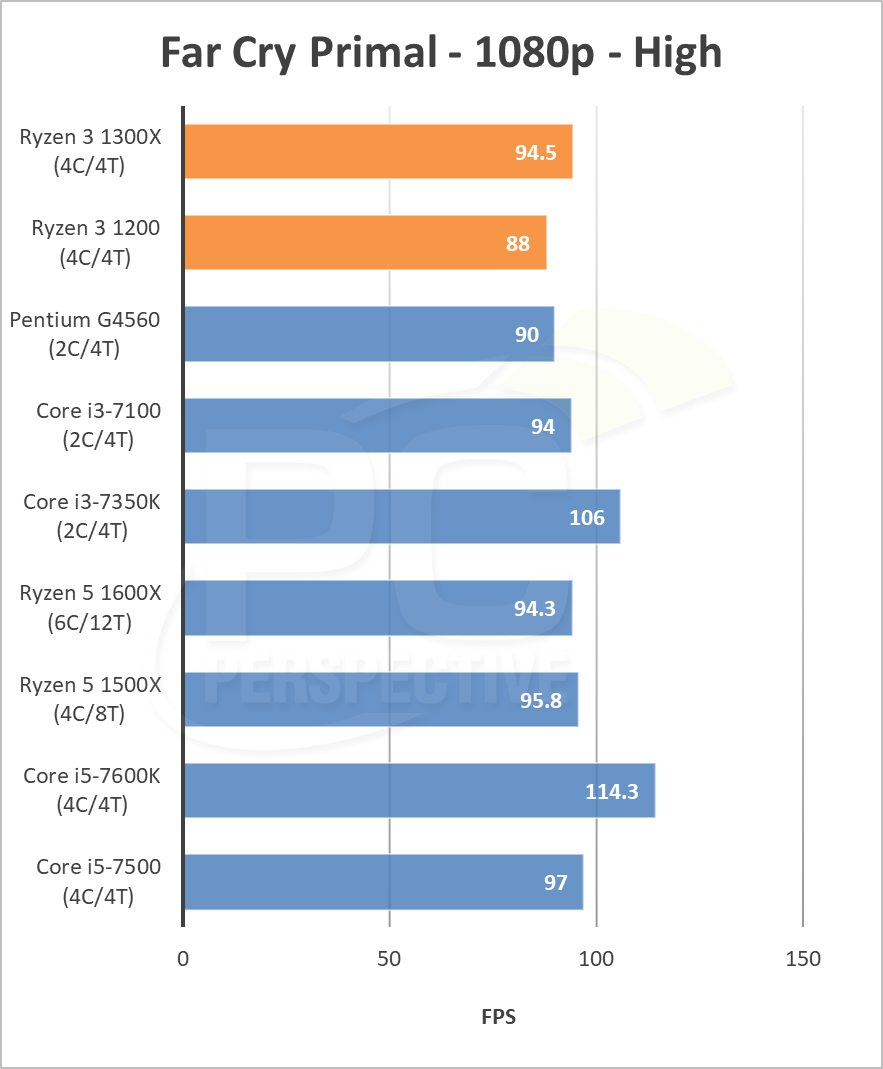 Far Cry Primal has been shown to see sizeable gaps in performance on previous Ryzen hardware in relation to the Core i5/i7 family but in this case, the Ryzen 3 1300X/1200 are right on par with the Core i3-7100 CPU as well as the more expensive Ryzen 5 parts. 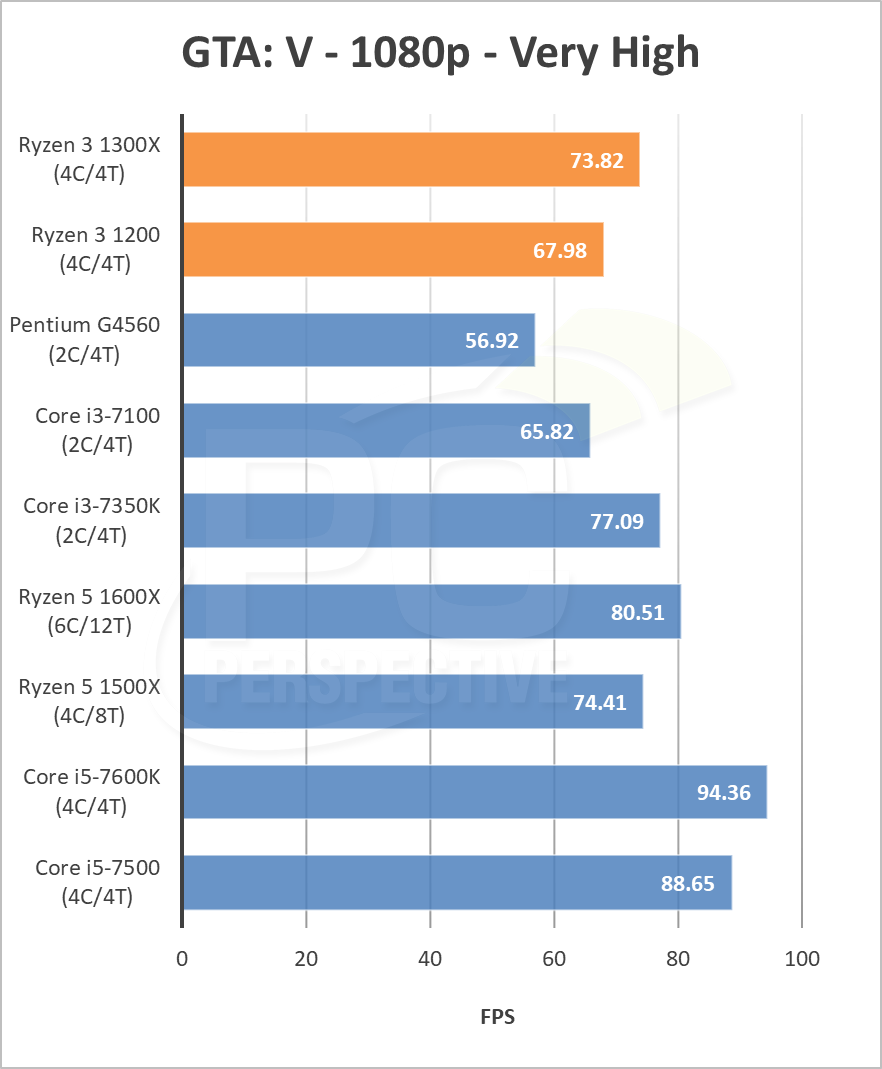 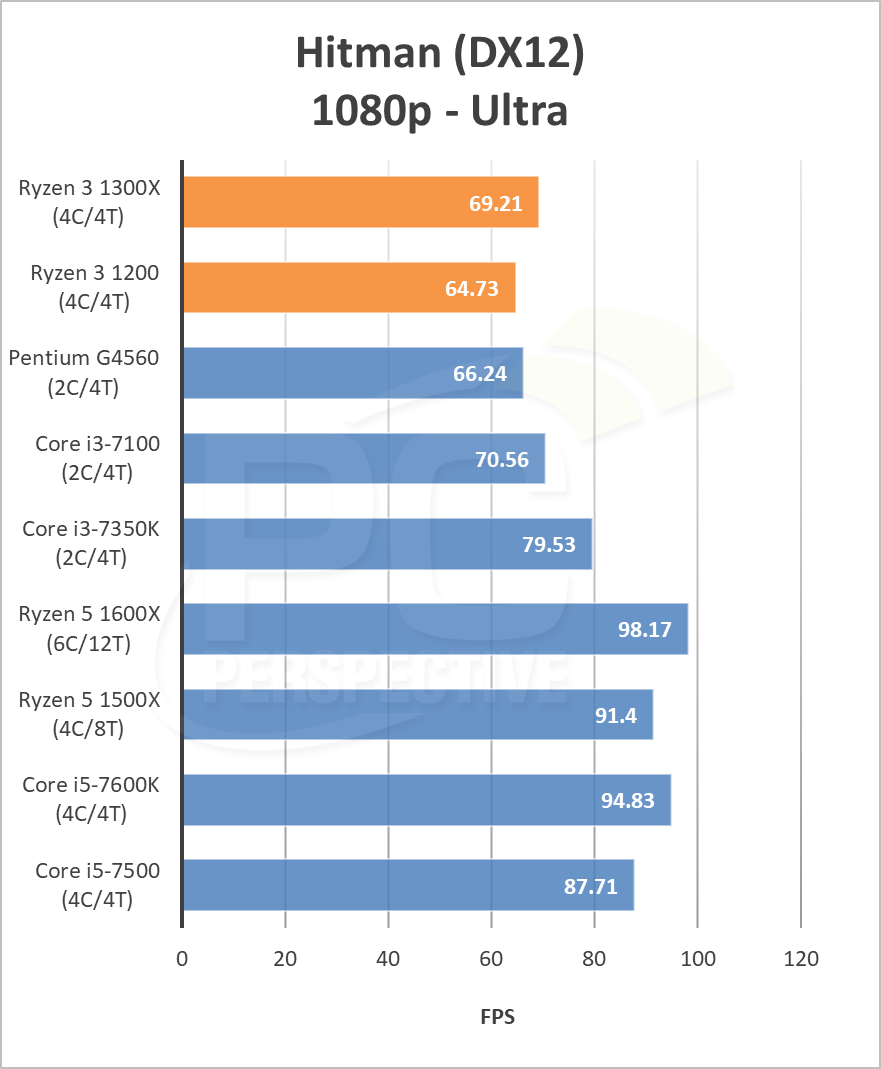 Hitman scores do put the Ryzen 3 at the bottom of the group, more or less, but the variance between it and the Core i3-7100 is small. The 7350K on the other hand is able to show a 15% performance advantage over the AMD 1300X.

Rise of the Tomb Raider (DX12) 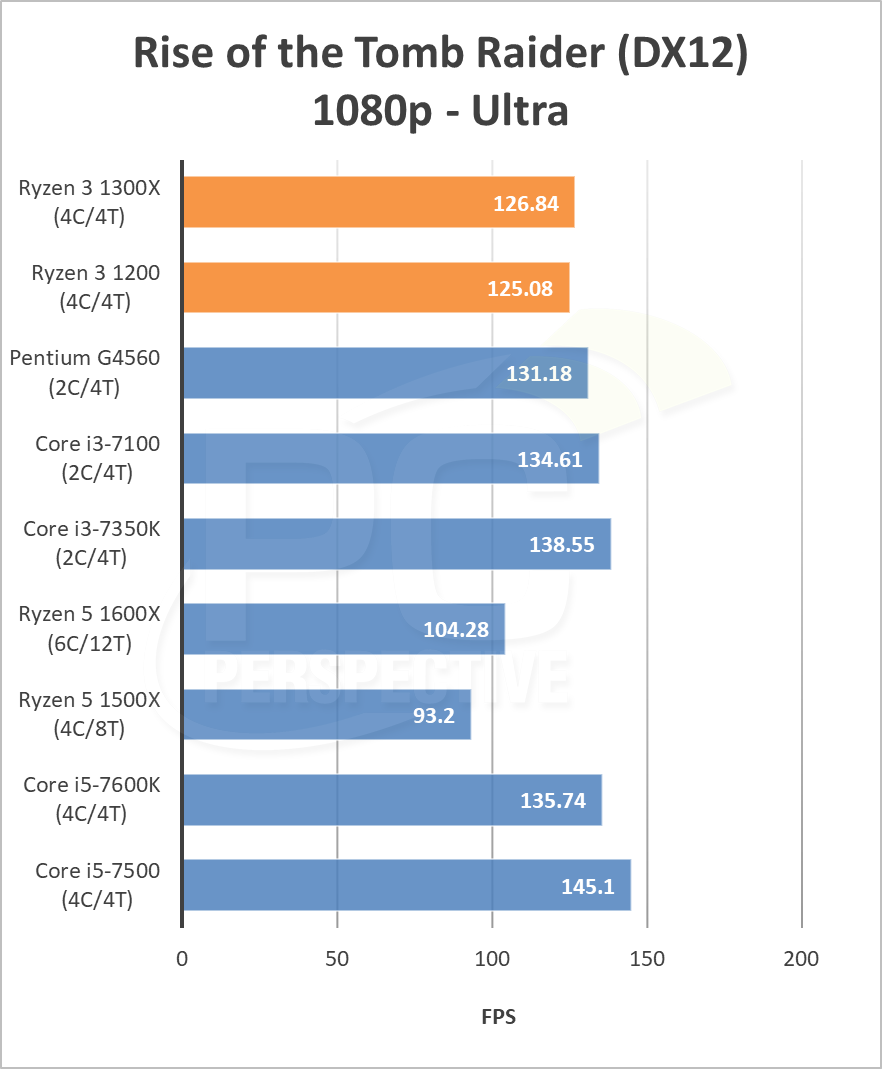 Scores for the Ryzen 3 line up with the performance of the Core i3 hardware, within 6% of the 7100. (Ignore our Ryzen 5 results here – they are from the pre-patched run of the game. Updating soon!) 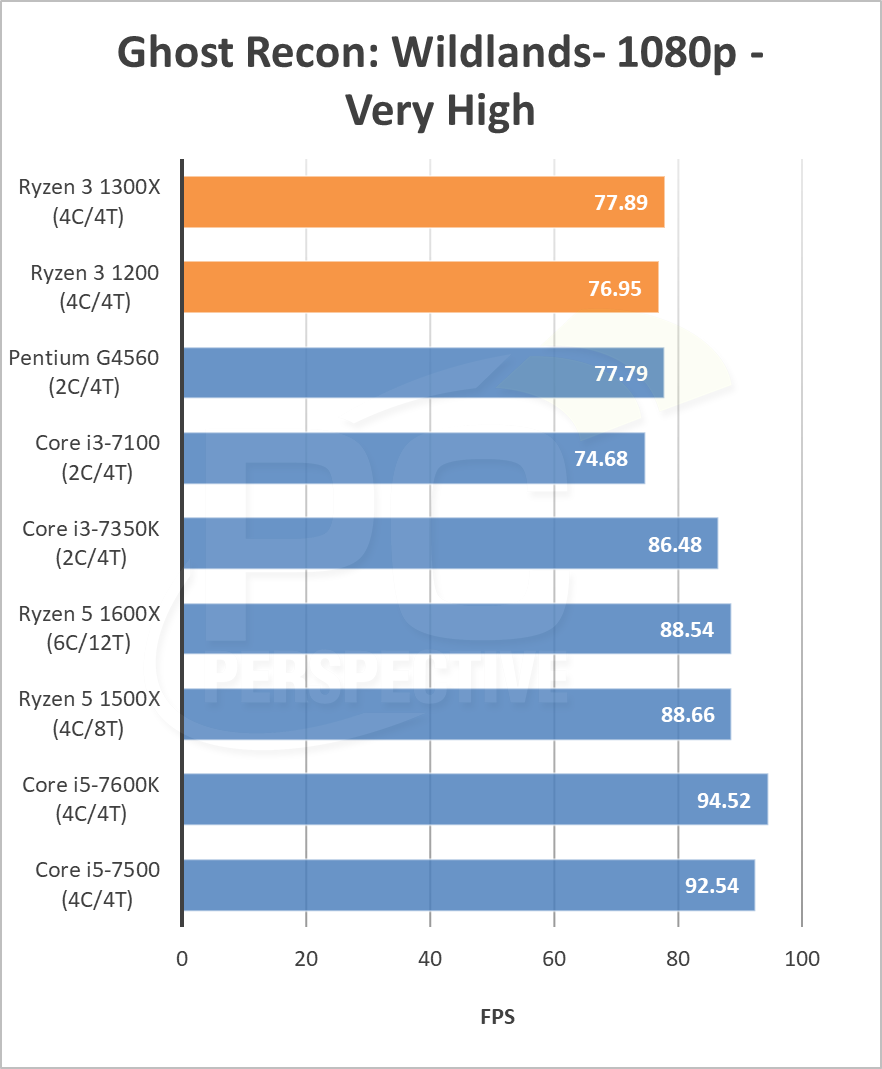 Wildlands shows a clear division between the Ryzen 3 and Core i3-7100/Pentium G4560 and the 7350K and above. It's interesting to see the gap from the 7100 to the 7350K as it indicates the added clock speed is improving things for Intel's platform. However, the Ryzen 5 does much better too, so it's likely that core count is also a benefit for game engine.

Compared to the gaming results in the initial Ryzen 7 processor release, and even those in the Ryzen 5 launch, the Ryzen 3 situation appears to be much more…sedate. No, it doesn't win in the benchmarks compared to the Core i3 very often, or by very much when it does, but it also doesn't have the large gaps in results between the AMD and Intel hardware left us scratching our heads and doubting our testing methodology. It looks like the Core i3-7100 and the 7350K would make better CPUs for a purely gaming budget build, but integrating the Ryzen 3 into that same build would result in an equally high performance experience with possible benefits in other application workloads.