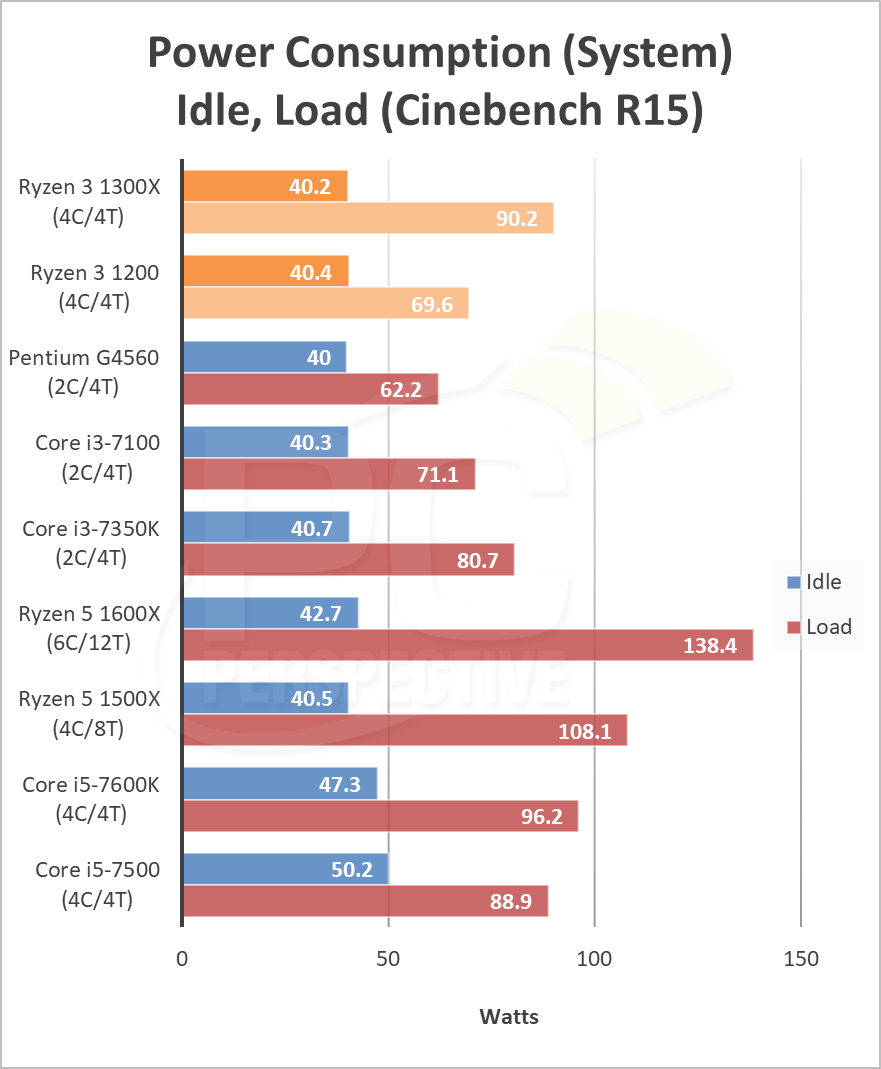 Idle power isn't an issue with any of these systems, but the CPU load power draw is clearly a different story. The Ryzen 3 1200, with a claimed TDP of 65 watts, uses nearly the same power as the Core i3-7100, a CPU that Intel claims to have a 51 watt TDP. The Ryzen 3 1300X however draws 20 watts of additional power over the 1200, even though both make the same TDP claims. I saw similar behavior with the initial Ryzen 7 CPU launch and questioned AMD's promoting those TDP specifications – it seems the same is in order here.

It would appear that for that added 300 MHz of clock speed on the Ryzen 3 1300X, AMD needs another 30% power draw to run reliably. That puts the 1300X in the same power envelope as the Core i5-7500, another 65 watt part. This difference in power efficiency is more academic than practical though as the power levels the 1300X pulls are still well under what most consumers will be preparing for. Whether it has an impact on overclocking will be answered another day. 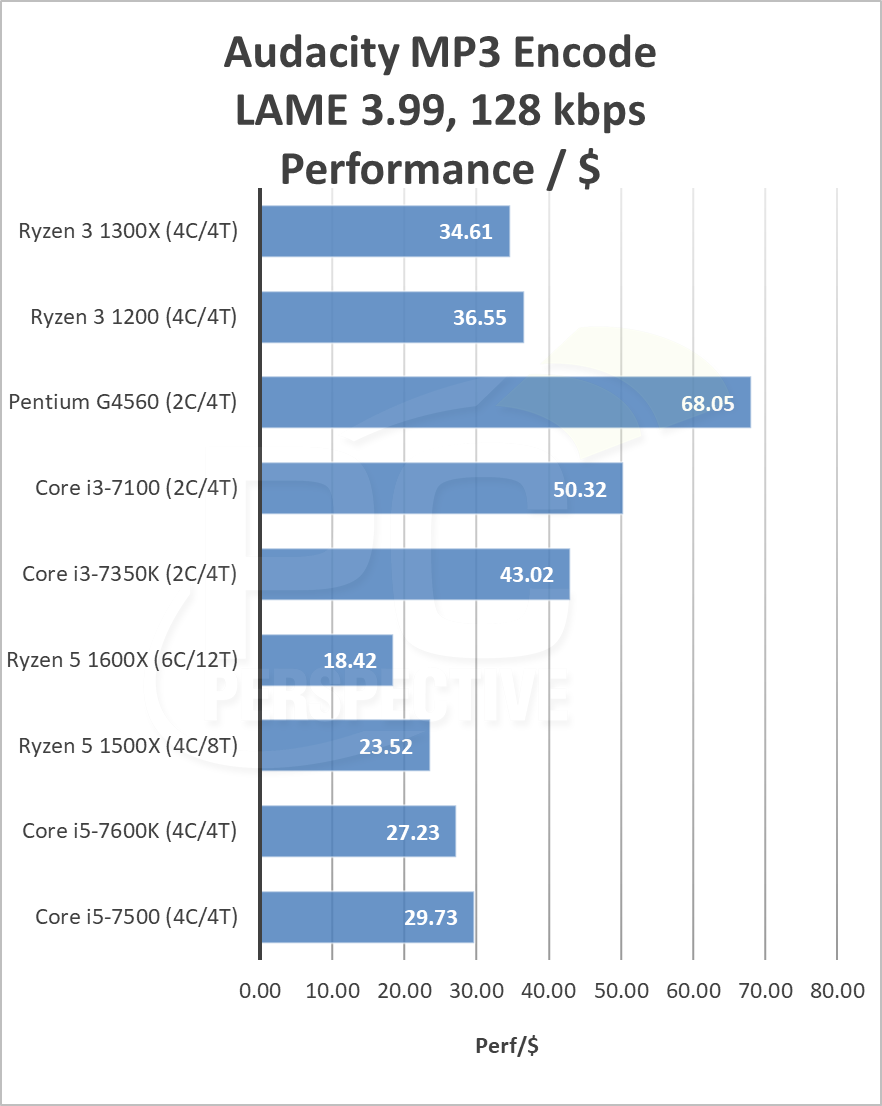 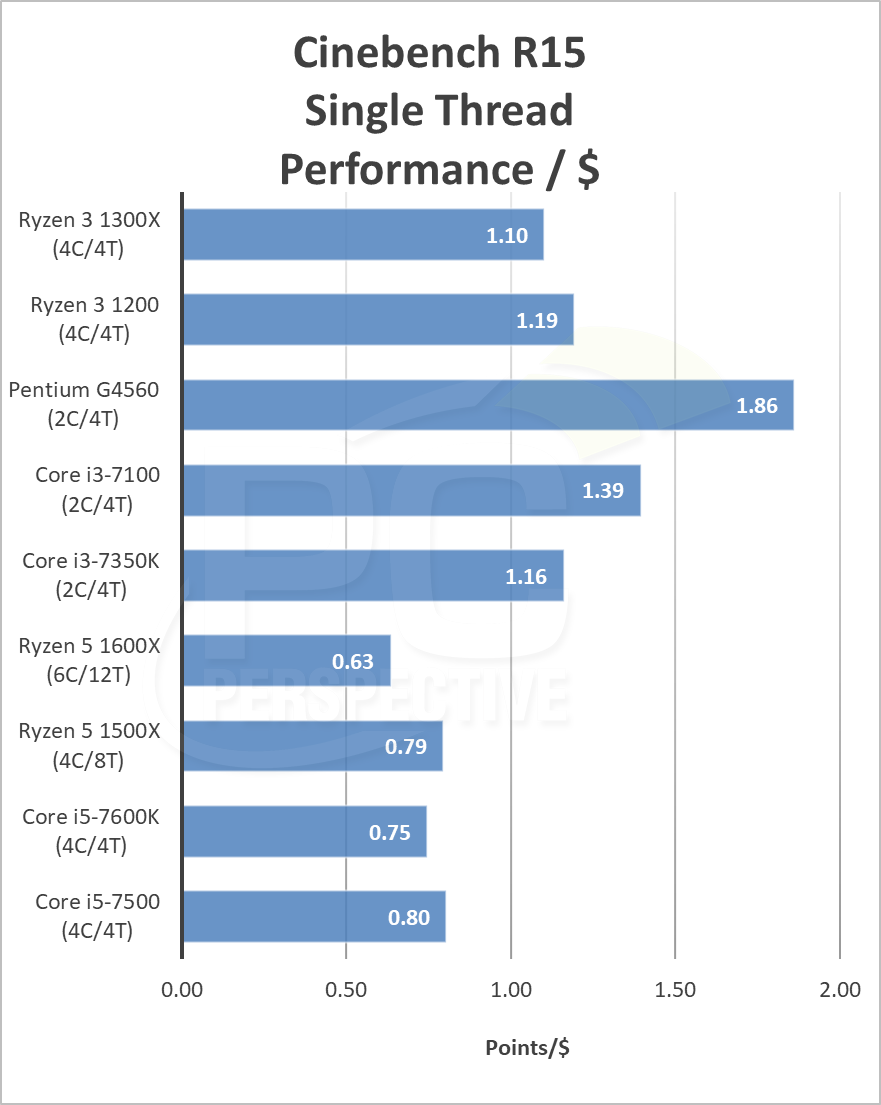 The single threaded performance dollar crown will clearly remain with the Intel product family in this price range, with the Core i3-7100 the most reasonable choice. The Pentium G4560 is an amazing single threaded beast for the price of $80 (when you can find it). 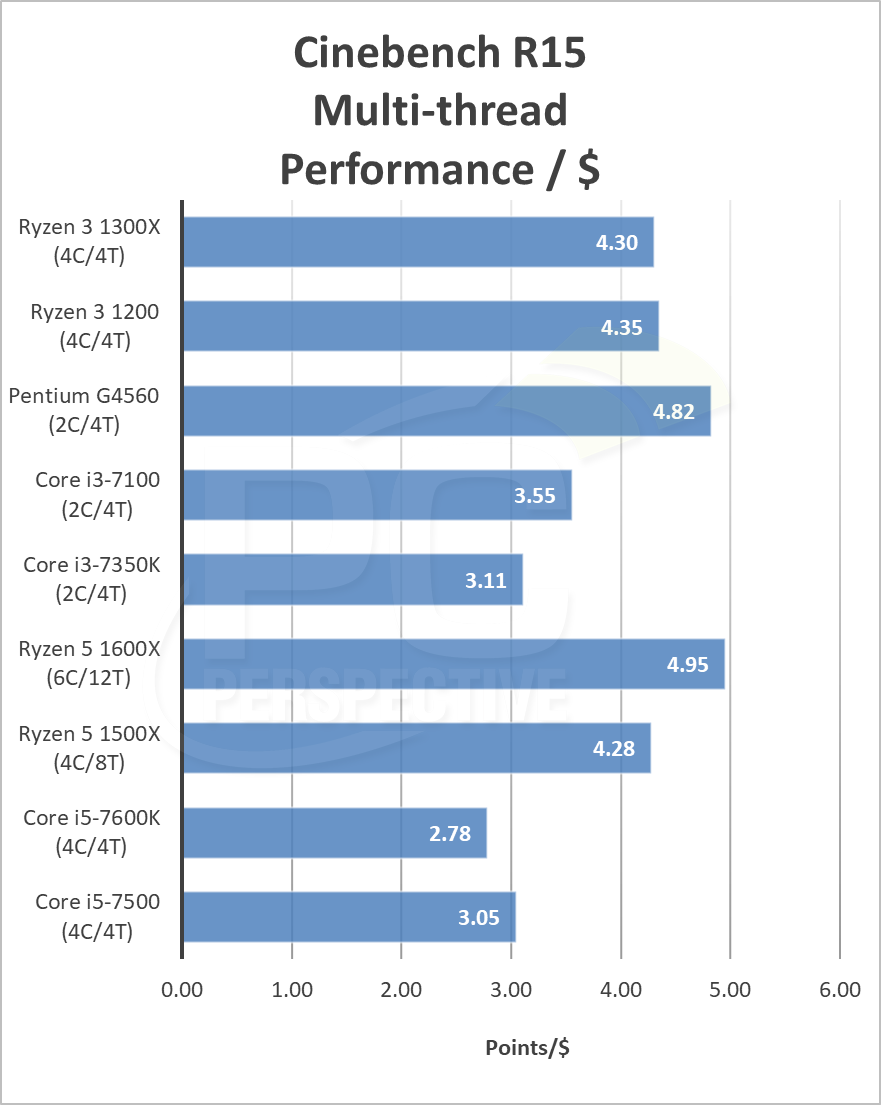 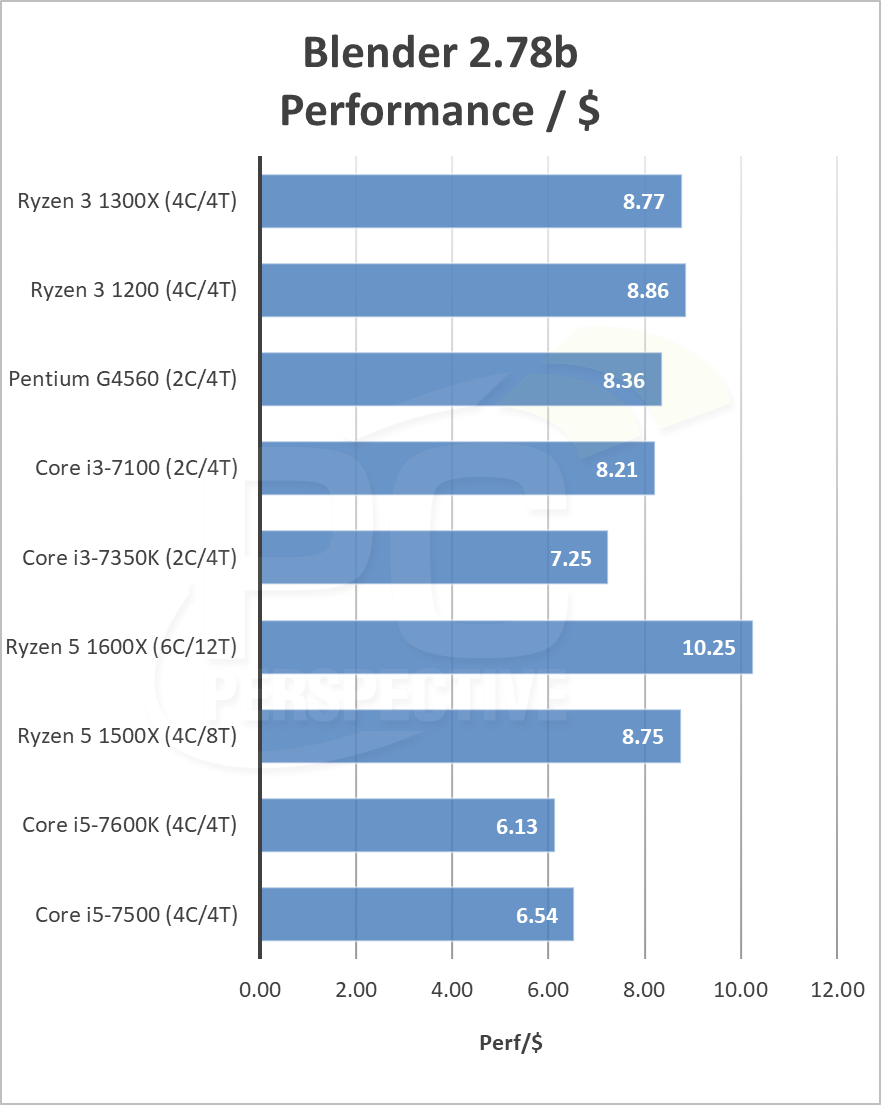 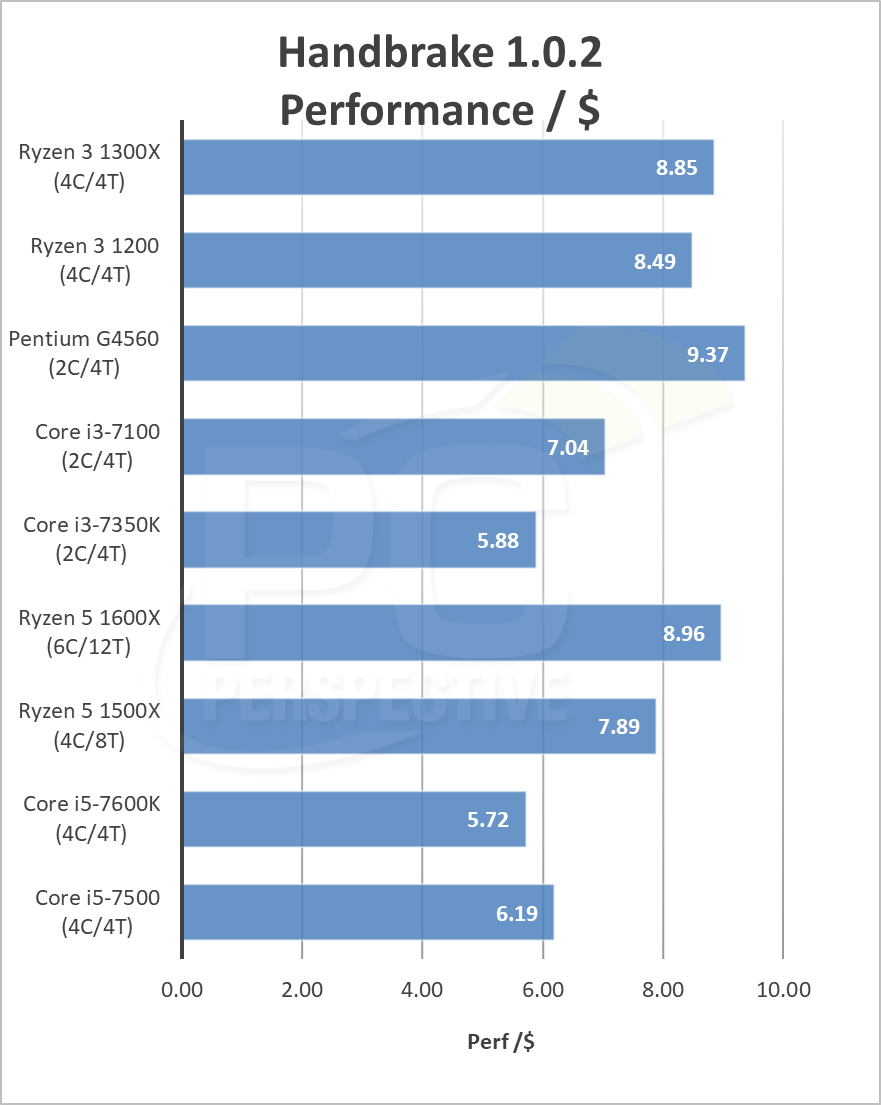 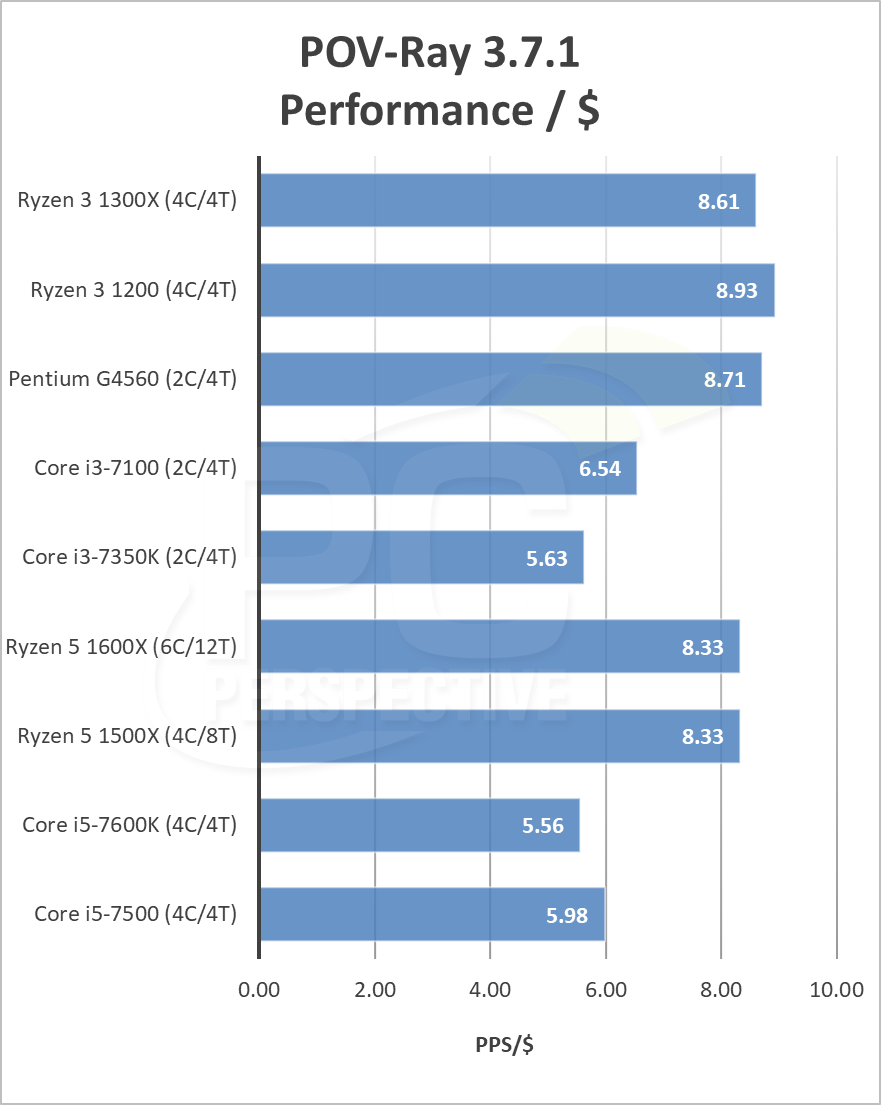 When we turn up the multi-threaded workloads, we see a dramatic shift in the results. The Ryzen 3 processors are significantly ahead of the Core i3 options (with the exception of the Pentium G4560 that takes a large performance penalty) and even come out better than the Core i5 group as well. For a low-cost system that needs moderate multi-tasking capability or will be using multi-threaded applications like video editing and transcoding, the value of the Ryzen 3 hardware is tough to overlook. 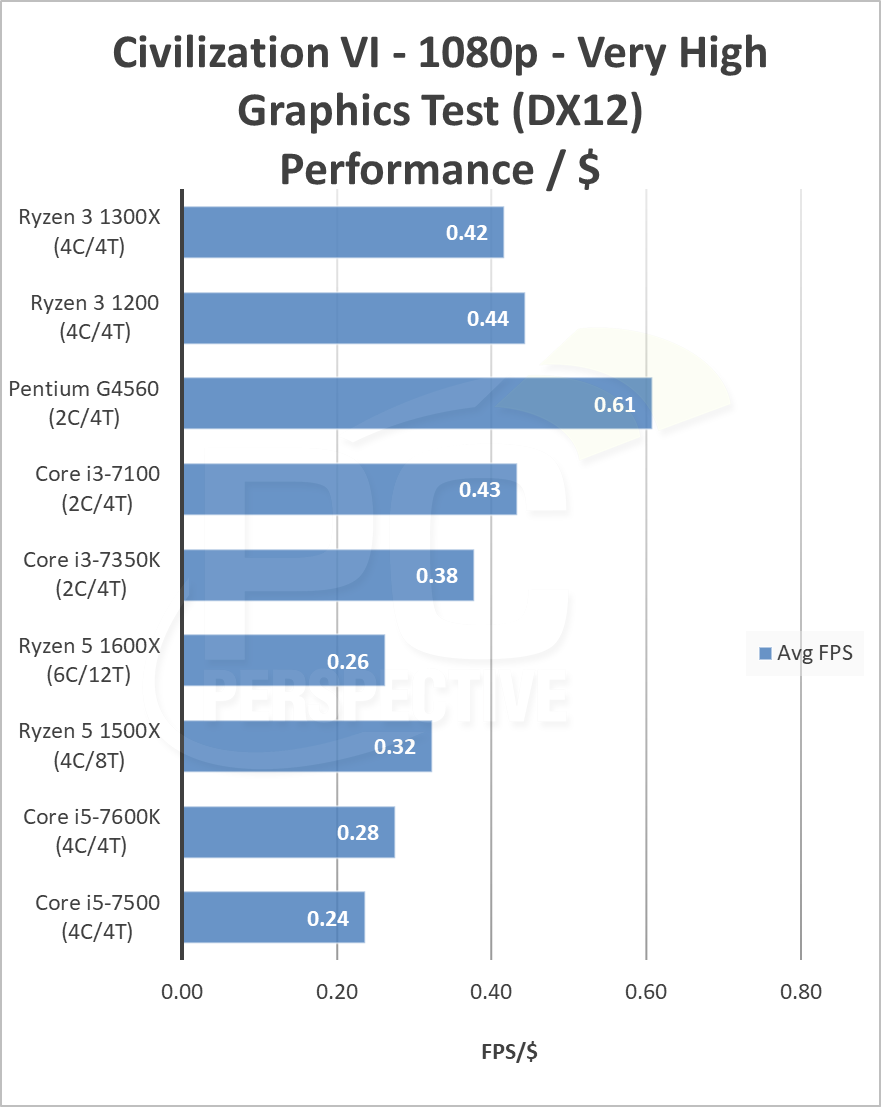 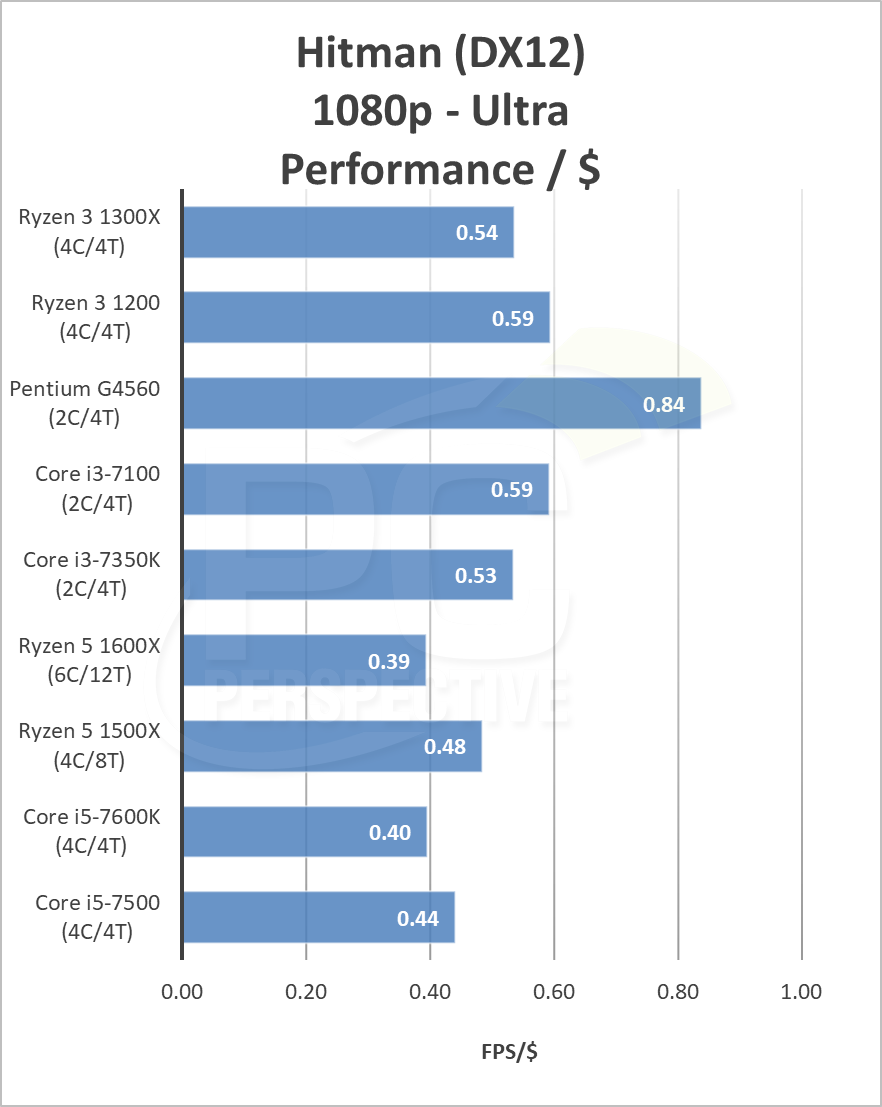 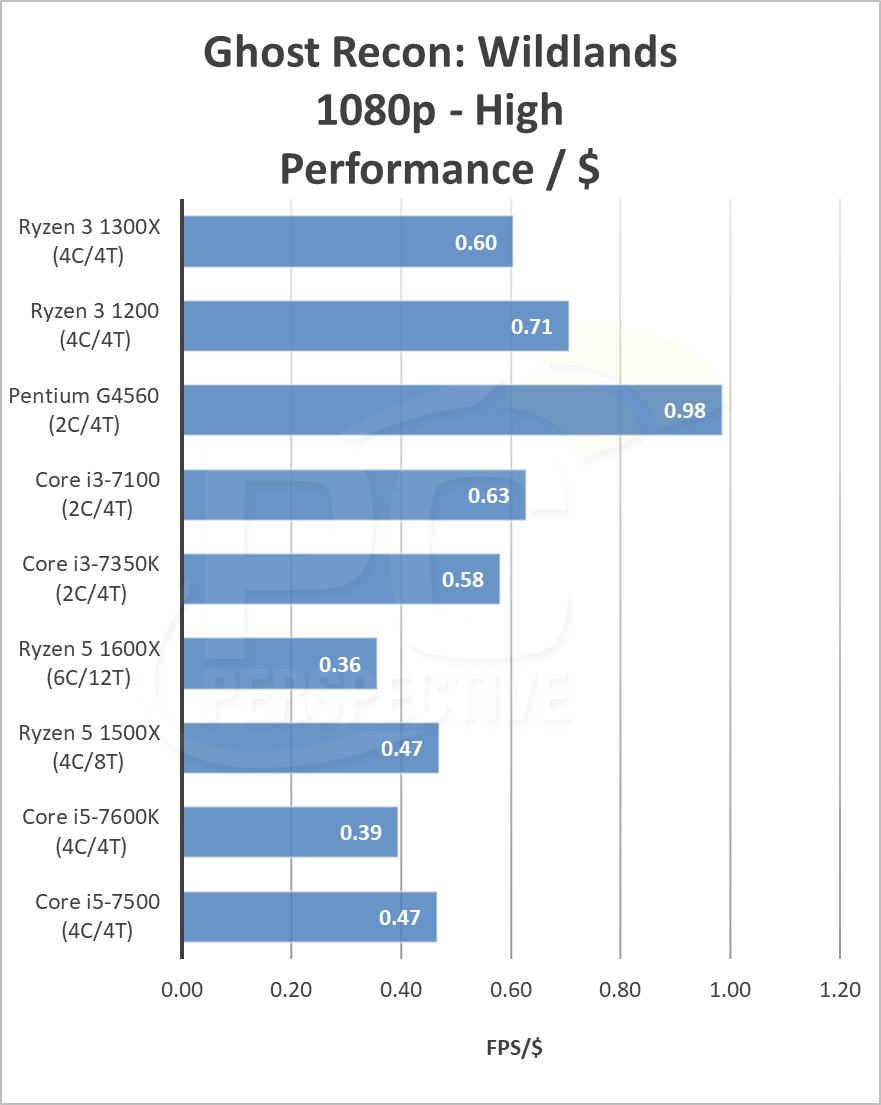 Three quick gaming results show me two interesting points. First, the Ryzen 3 1300X and 1200 do extremely well in our performance per dollar metrics, besting the Core i3, Ryzen 5, and Core i5 families. Second, the Pentium G4560 is an impressive value for games that only require lightly threaded work.

The general take from our time with the AMD Ryzen 3 processor family was easily predicted and played out nearly as I had drawn it up. Single threaded applications and workloads that depend on high IPC and high frequency of a single core will find Intel's Core i3 and Pentium family very agreeable. This shows in SYSmark, WebXPRT, Geekbench, Cinebench (single), and others. The gaps range from moderate to severe depending on the test with a good average somewhere in the ~15% range when looking at the Ryzen 3 1300X and the Core i3-7100.

Multi-threaded workloads are a different story and in most instances the "four true core" mentality of the Ryzen 3 is able to overpower the 2-core/4-thread design of the Core i3 parts. Handbrake, Cinebench, Blender, POV-Ray, and SiSoft Sandra show this to be the case nearly across the board. Again, that gap can swing between extreme and moderate levels of performance differences, but in general the edge falls to AMD's Ryzen 3 1300X by 20-25% over the Core i3-7100 and 10-15% against the higher clocked Core i3-7350K. 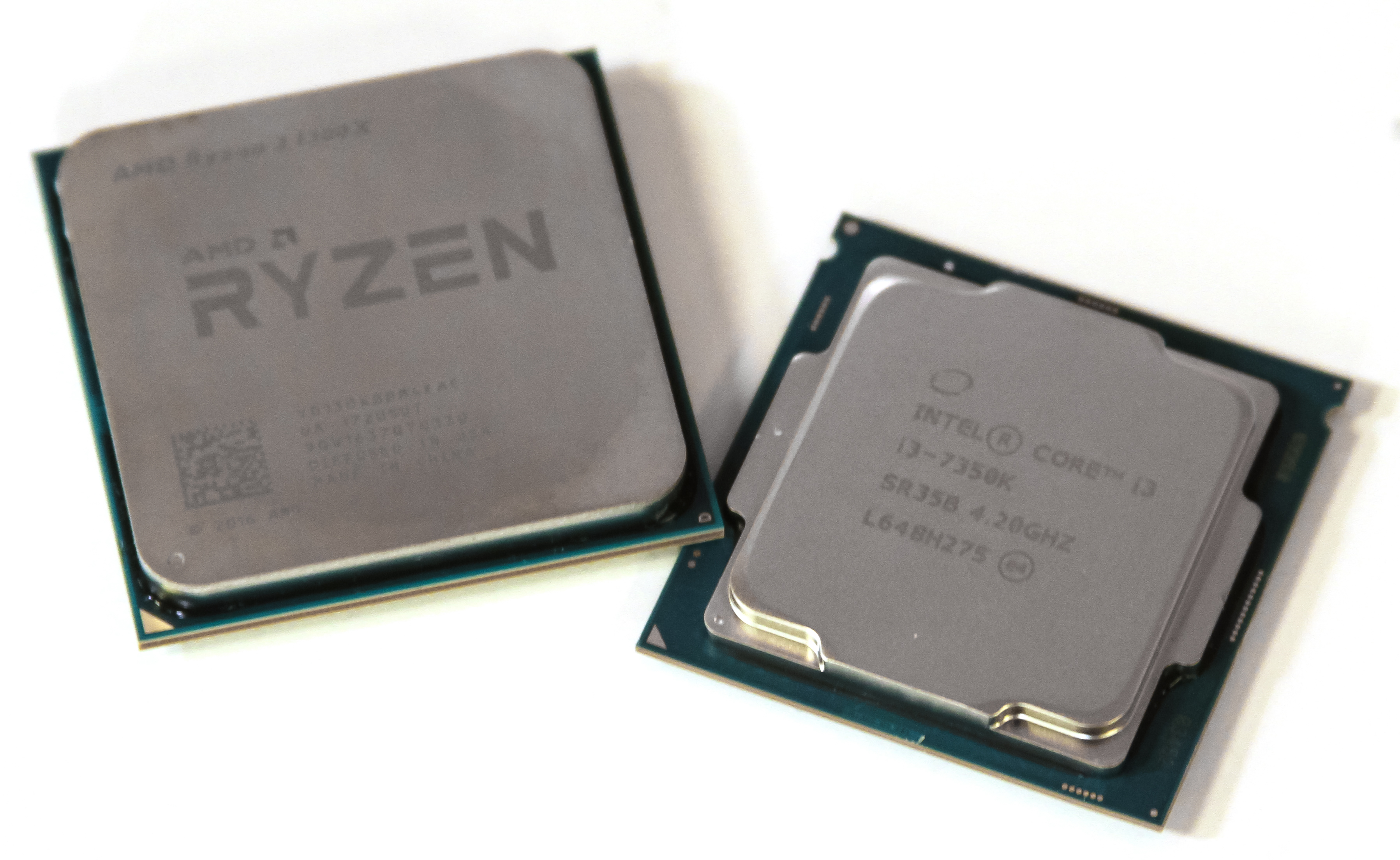 Gaming performance was going to be a touchy subject but in general I found the Ryzen 3 to do quite well, though not well enough to take a lead in many areas. The best I can say is that the Ryzen 3 1300X and 1200 produce very similar gaming experiences to the Core i3-7100 and Pentium G4560 but do so while providing the advantage of multi-threaded flexibility and forward looking integrations.

The Ryzen 3 1300X and 1200 will be available starting today and motherboards for these platforms have been widely available for some time.

The Ryzen 3 1300X is priced directly between the Core i3-7100 and the Core i3-7350K and that seems like the correct place for it to fall in the market. The Pentium G4560 is a wildcard, with current selling prices around $80 but an MSRP of just $65. The Ryzen 3 1200 has a unique price point that will attract a lot of gamers and enthusiasts with the tightest of wallets. 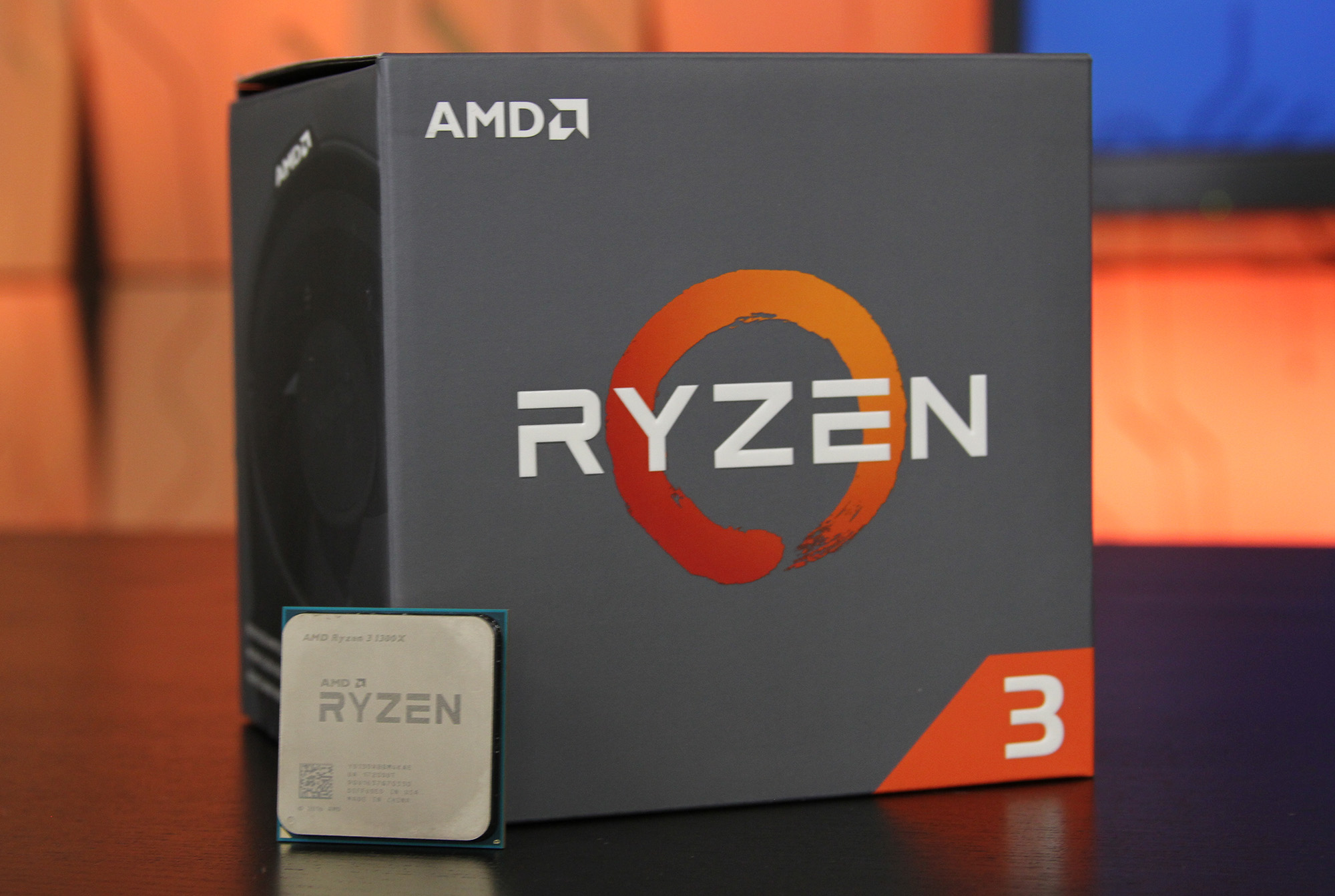 For the mainstream consumer and market, we now have a complete picture of the Ryzen CPU family from AMD and I am impressed by the performance, capability, and completeness of the lineup. In a matter of just a few months, AMD has gone from irrelevant to revolutionary, rebooting the company in a way that seemed impossible just a few years ago. The Ryzen 3 1300X and 1200 are not rewriting the segment but they are reorganizing the way the sub-$150 processor market will unfold for 2017 and beyond.