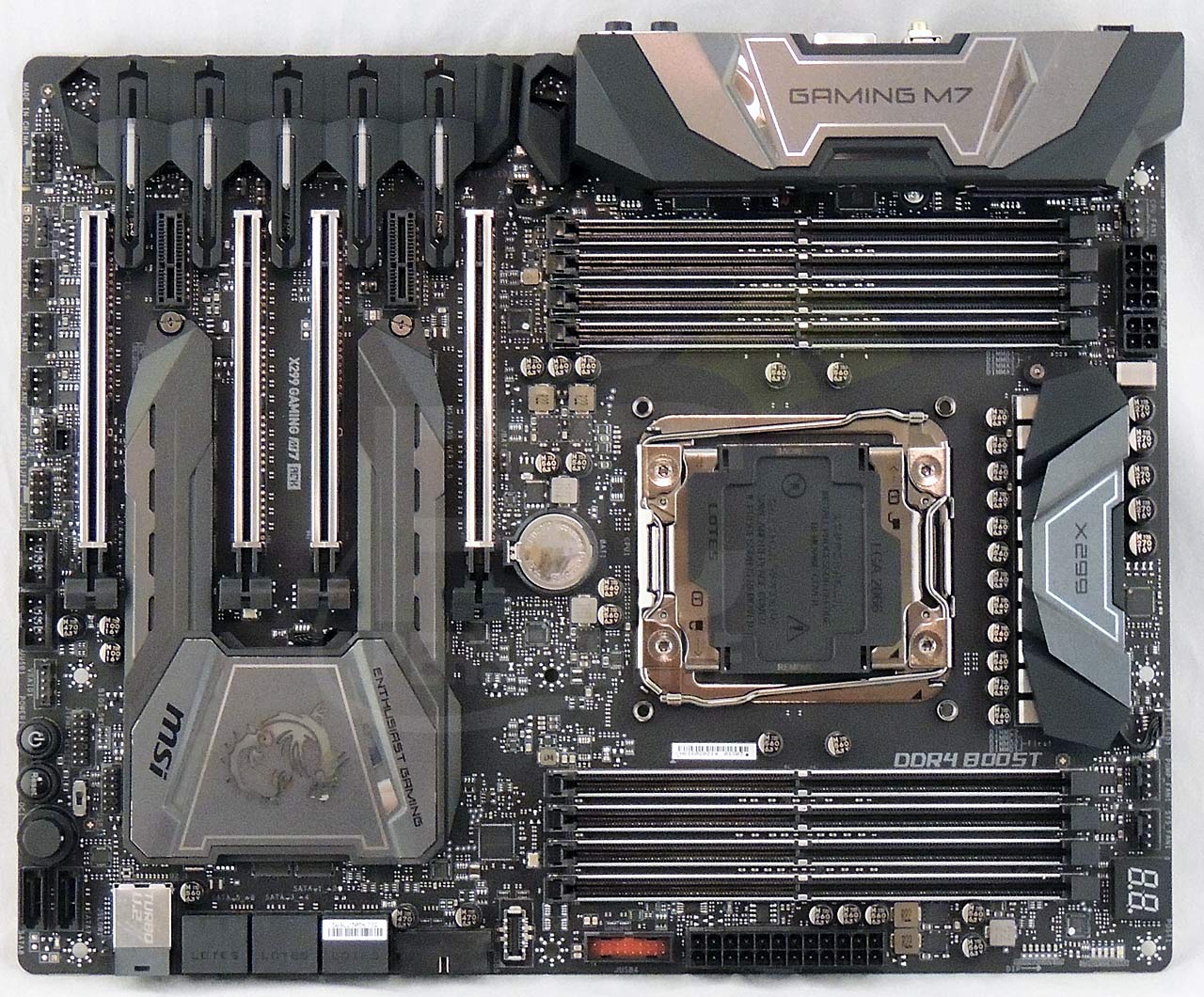 The X299 Gaming M7 ACK motherboard features a black PCB and black heat sinks with chrome mirrored accents to cool various on board components. The rear panel shroud is done with similar styling, featuring the Gaming M7 board branding. MSI includes their Enthusiast Gaming series logo on the chipset heat sink with the dragon logo and striping done in chrome accents to draw the eye. The board was designed with an ATX form factor for compatibility with most standard-sized enclosures, while providing more than enough surface area for its integrated feature set. 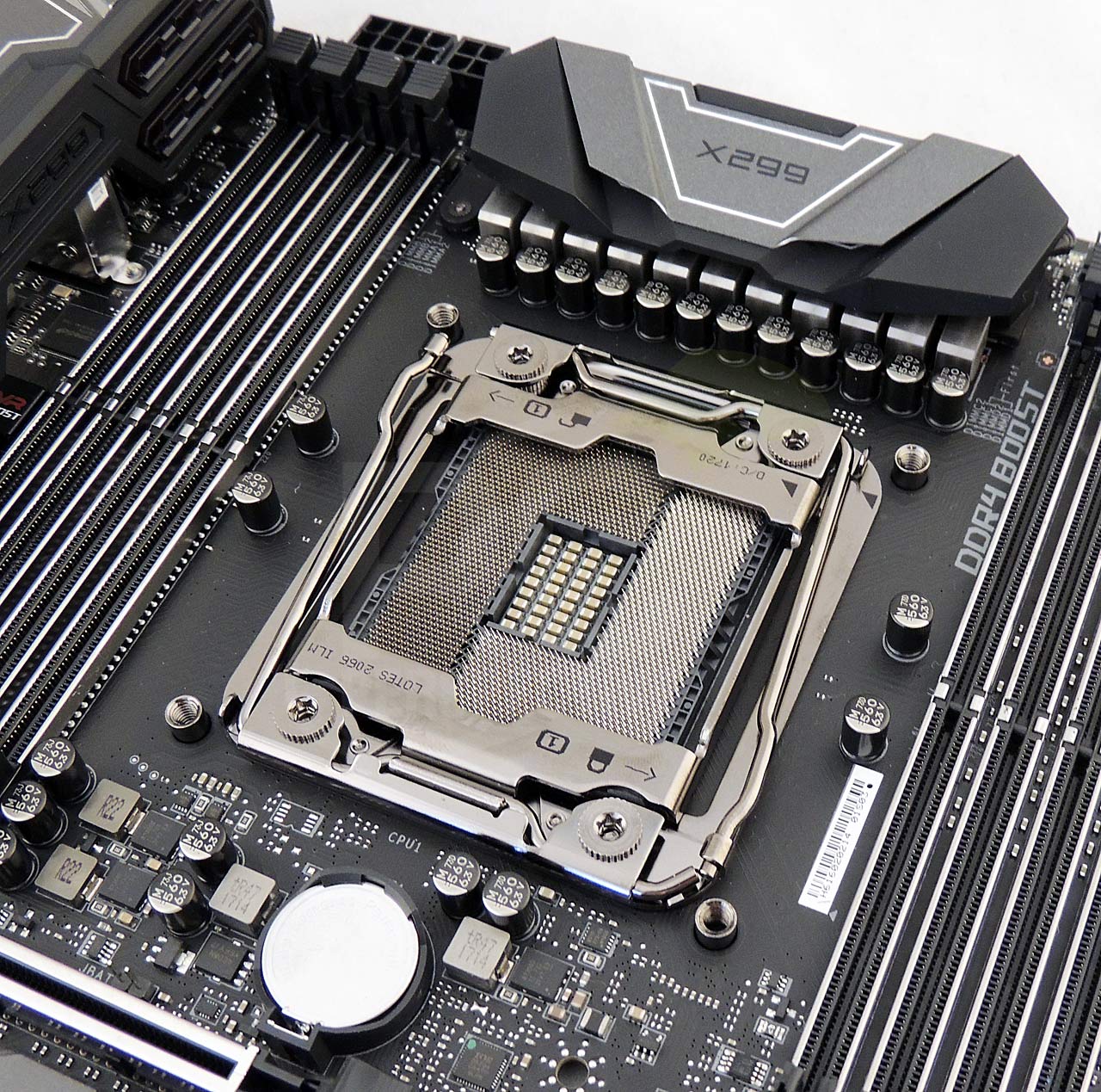 MSI designed the X299 Gaming M7 ACK motherboard with a total of 12 digital power phases to power the CPU, providing more than enough juice for anything thrown its way. The CPU VRMs are cooled by a large aluminum block to the right of the socket area. Note that 11 of the 12 chokes are located under the left lip of the VRM cooler with the 12th choke to the VRM cooler's upper right (just under the ATX12V connectors). 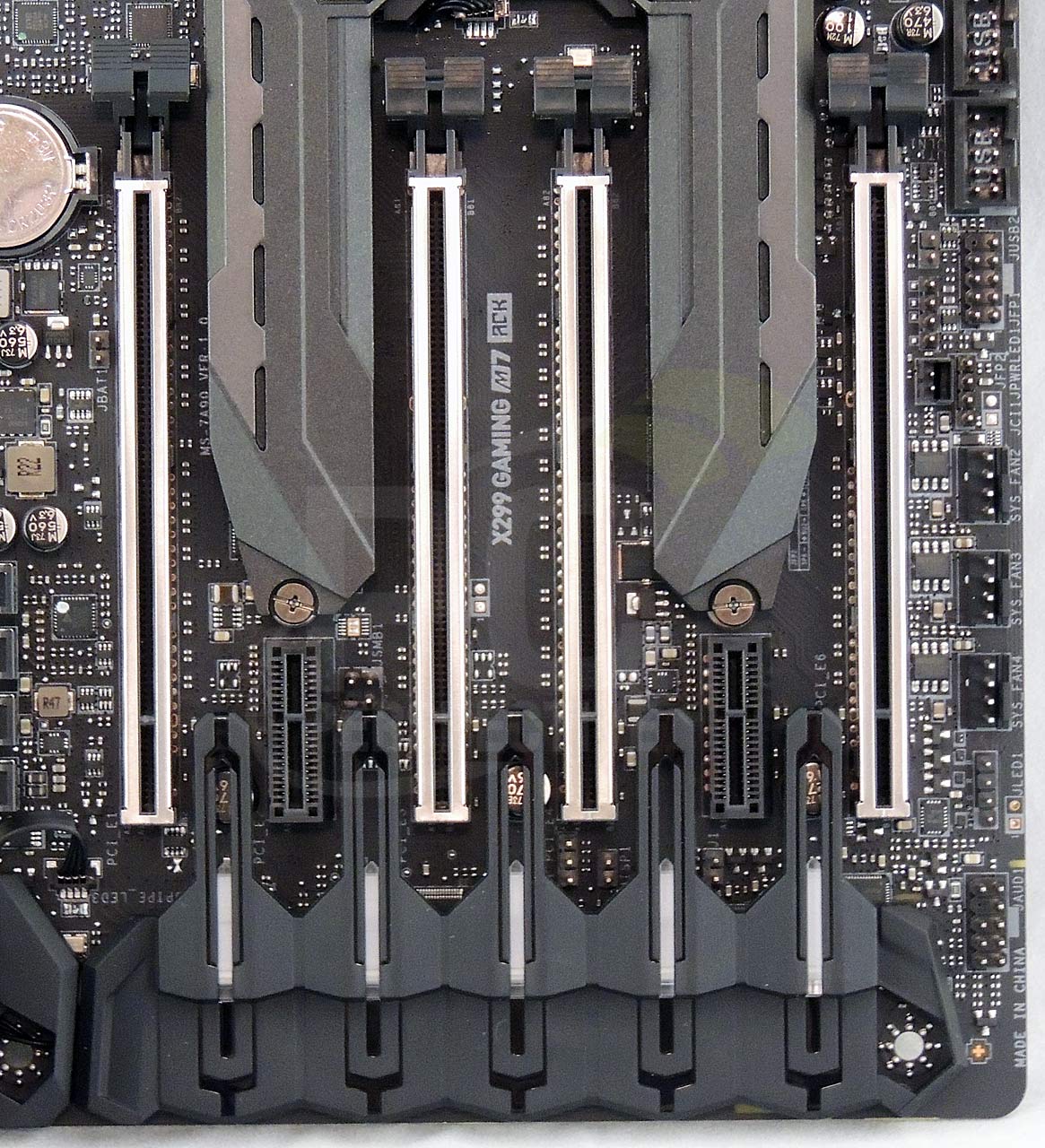 The board contains a total of six PCIe slots – four PCIe x16 slots and two PCIe x1 slots. The M.2 slots are located under dual hinged cover plates located directly below PCIe x1 slots 1 and 2.. The PCIe x16 slots support the following bandwidth configurations depending on the processor in use: 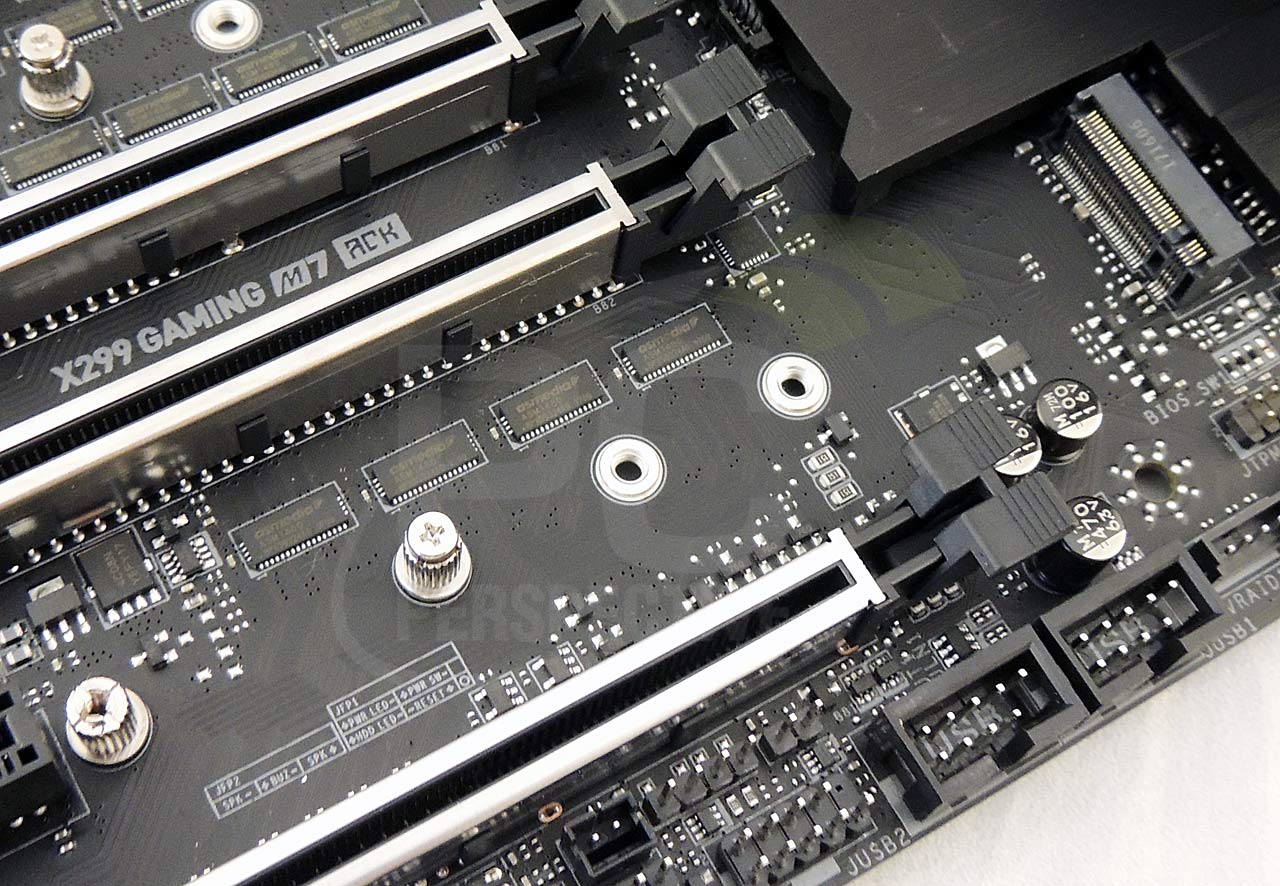 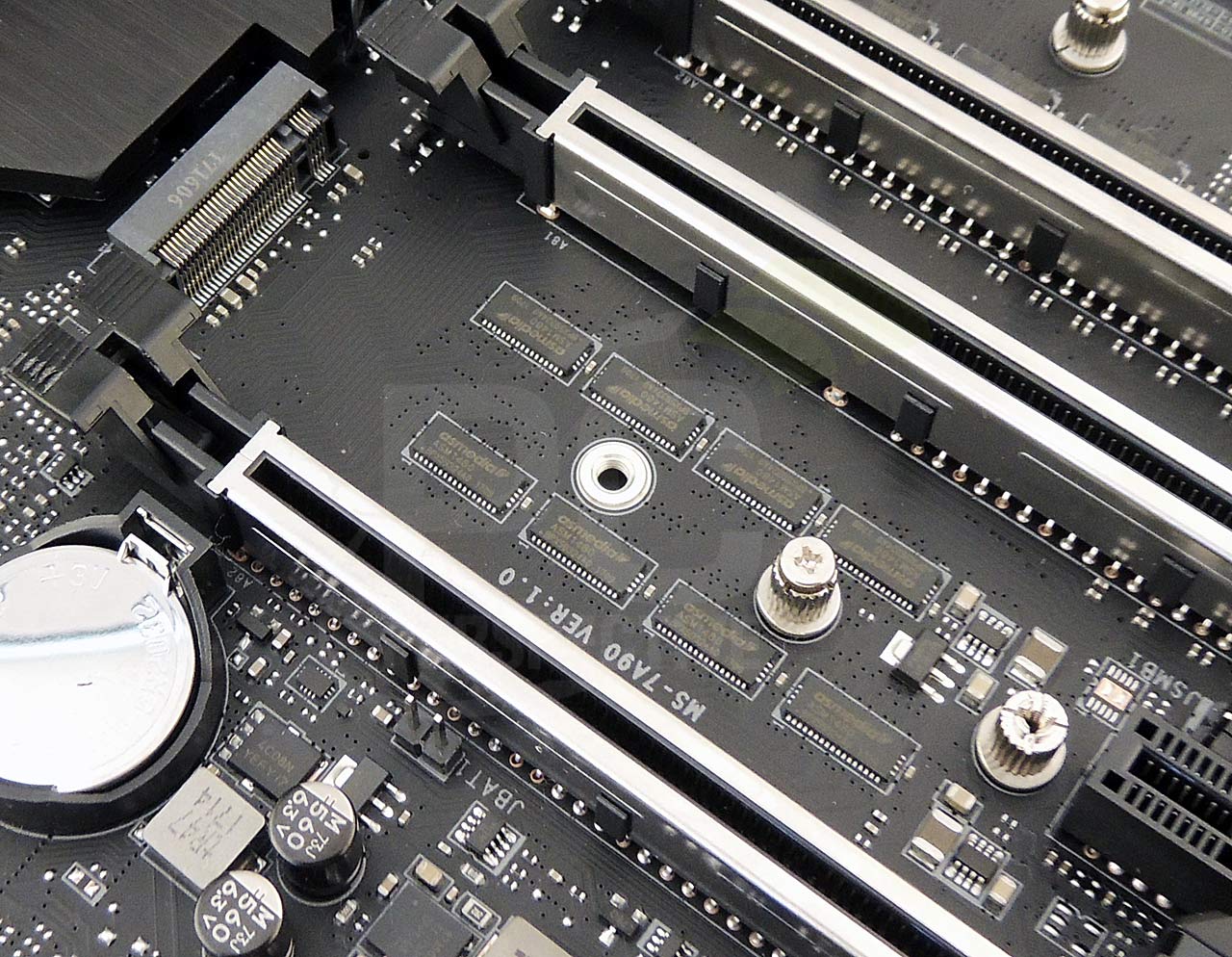 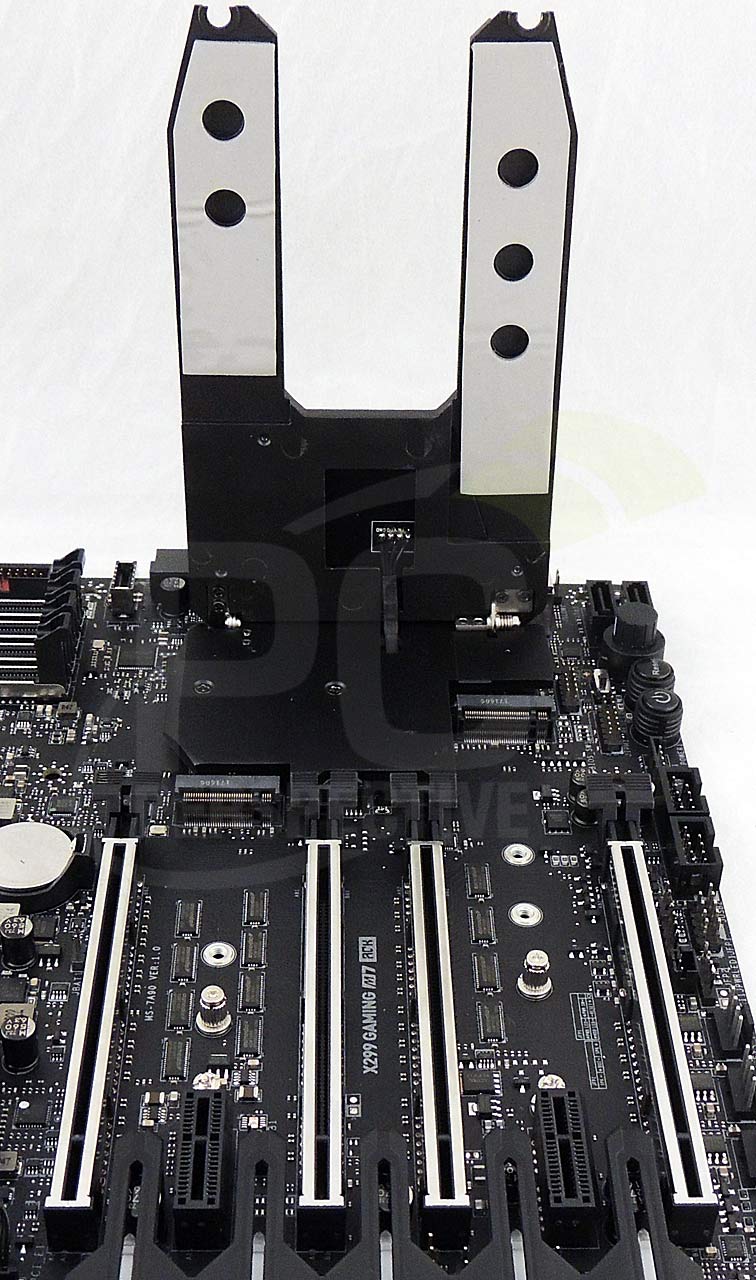 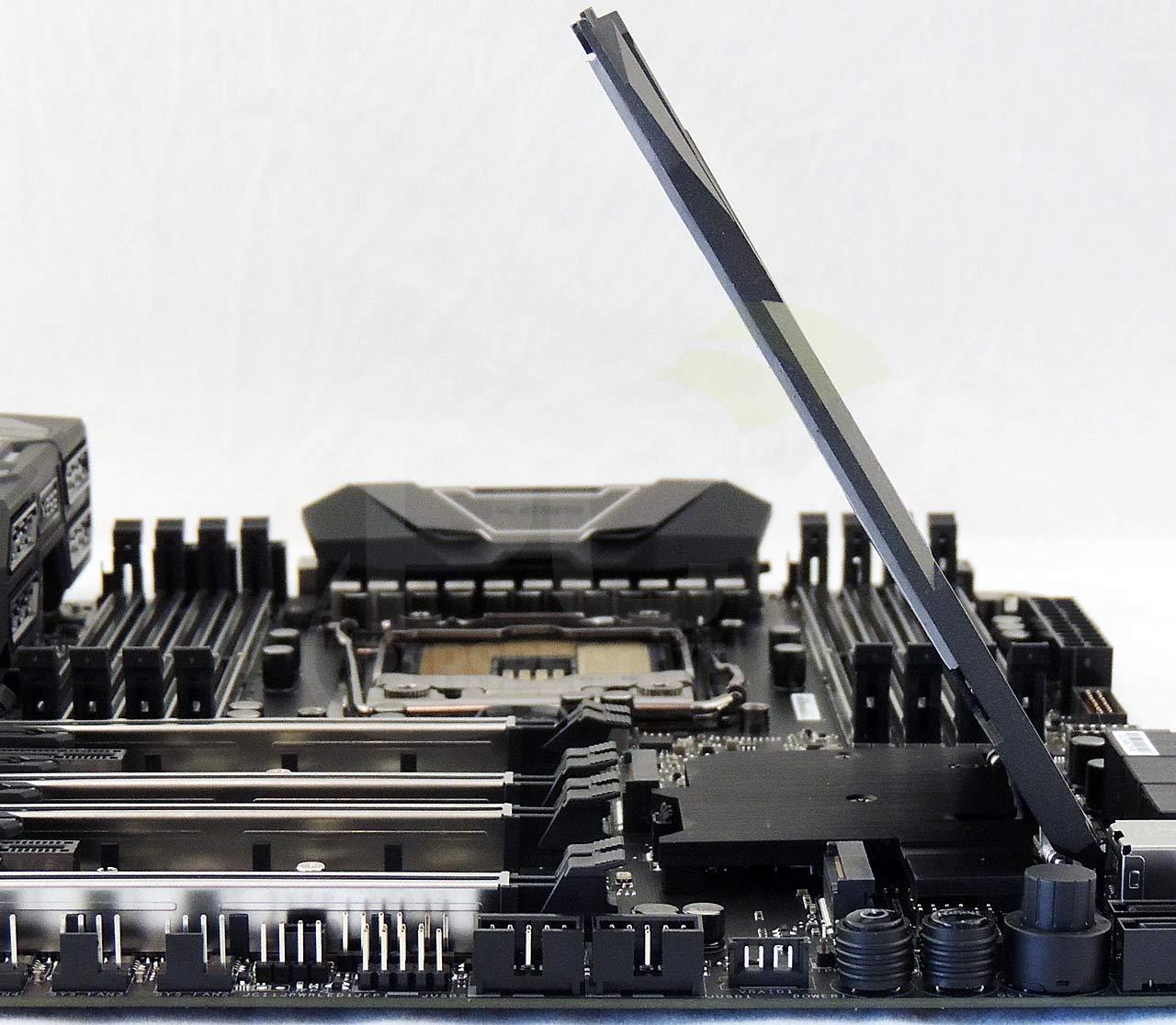 The PCIe cover plate is held in place with the two M.2 device port screws. It swings upward once the screws have been removed from the board to a full 90 degree position. The cover platge itself is aluminum with thermal tape covering the areas that come into contact with the surface of the M.2 drives. This helps to electrically isolate the cover plate from the M.2 devices as well as acting as a secondary heat dissipation path for the drives. 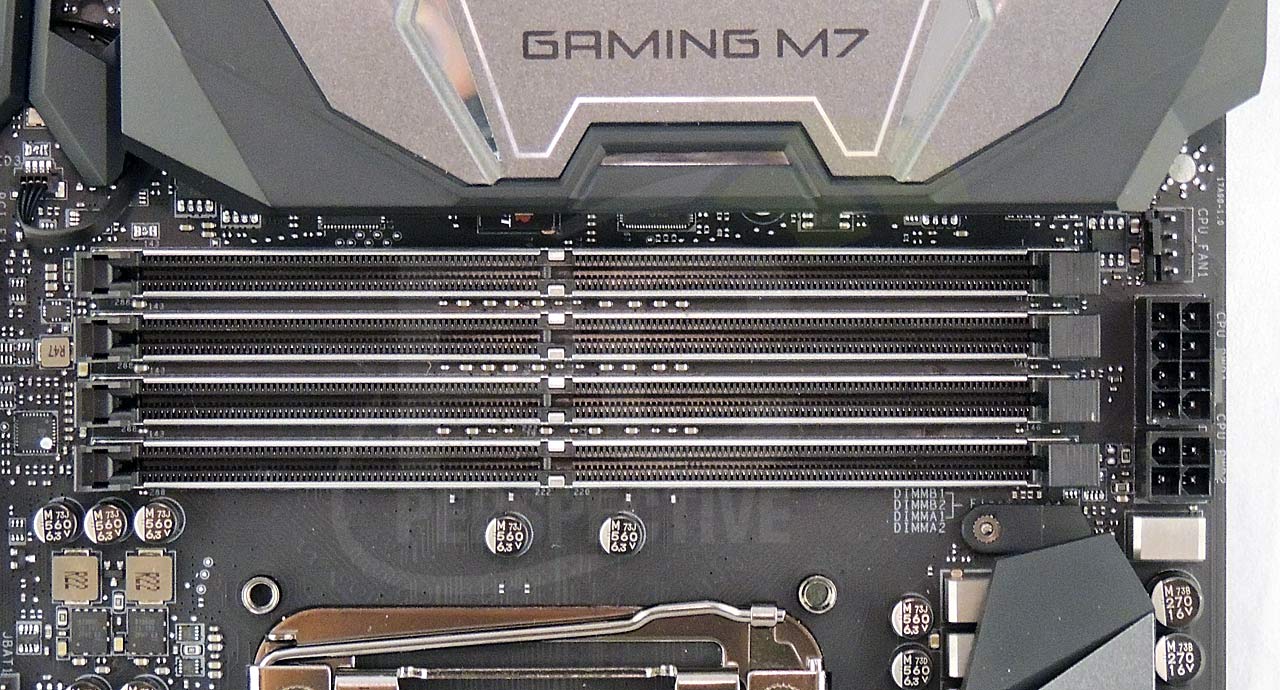 The board houses a total of eight DIMM slots, split into dual sets of four above and below the CPU socket. All DIMM slots were designed with metal reinforcement brackets to better secure the DIMMs in place. Quad Channel memory mode is active with modules placed in slots 1 / 3 or 2 / 4 in both the upper and lower slot sets. The primary slots in both sets are DIMM slots 1 / 3. There is a USB 3.1 type A port and a USB 3.0 header to the lower left of the lower DIMM slots. The 4 + 8 dual ATX12V power connectors are located to the right of the upper set of DIMM slots. 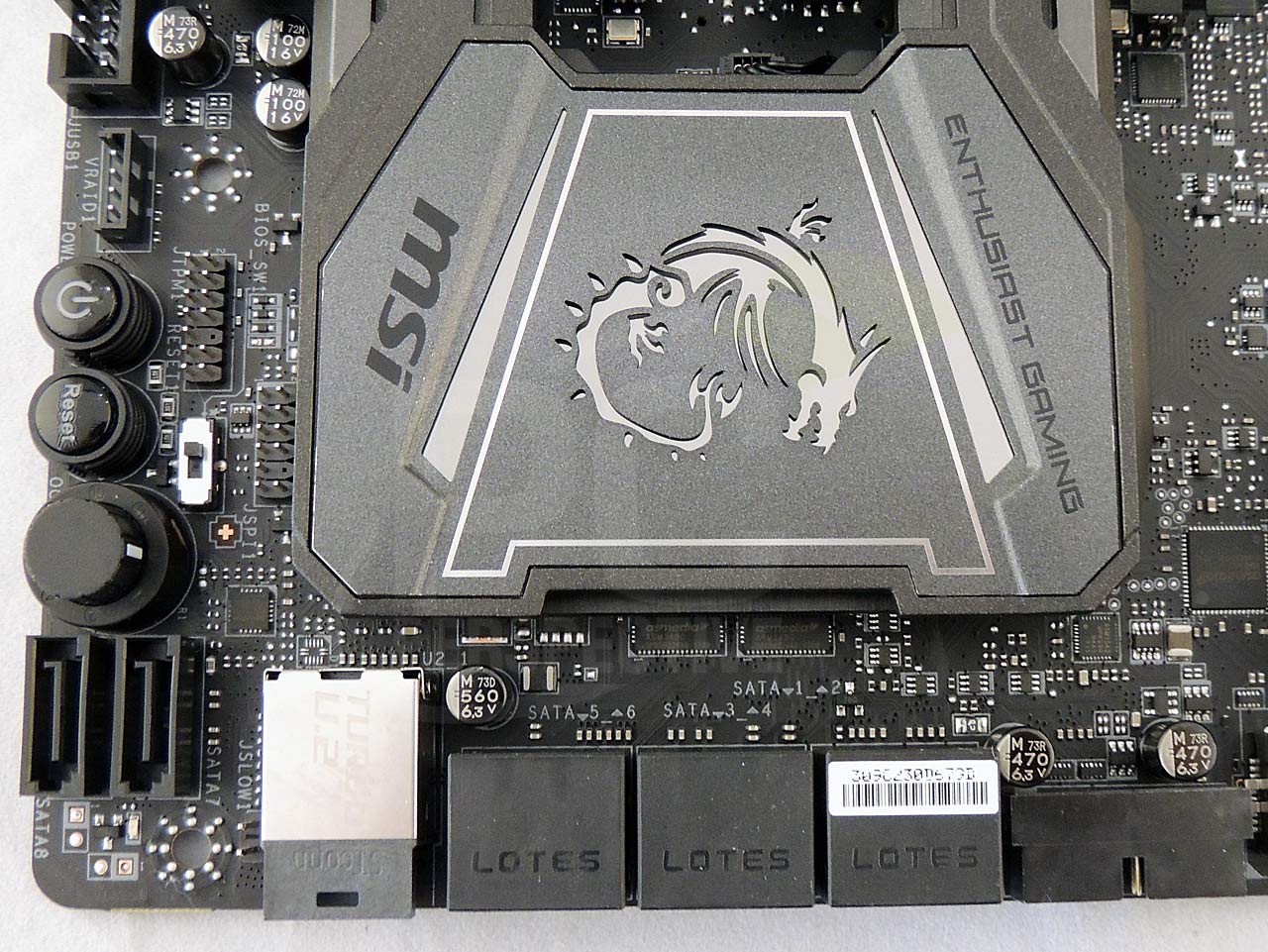 The Intel X299 chipset is covered with the PCIe hinged cover plate with MSI's Enthusiat Gaming logo in chromed accents. The chipset cooler is just under the cover plate. Just below the chipset is the board's drive port block, integrating SATA ports 0-5, a PCI x4 U.2 port, and a USB 3.0 header. SATA ports 6 / 7 are surface mounted to the lower left of the chipset. Note that SATA ports 4 / 5 / 6 / 7 and the U.2 port all share bandwidth, resulting in those SATA ports being disabled with a drive plugged into the U.2 port. 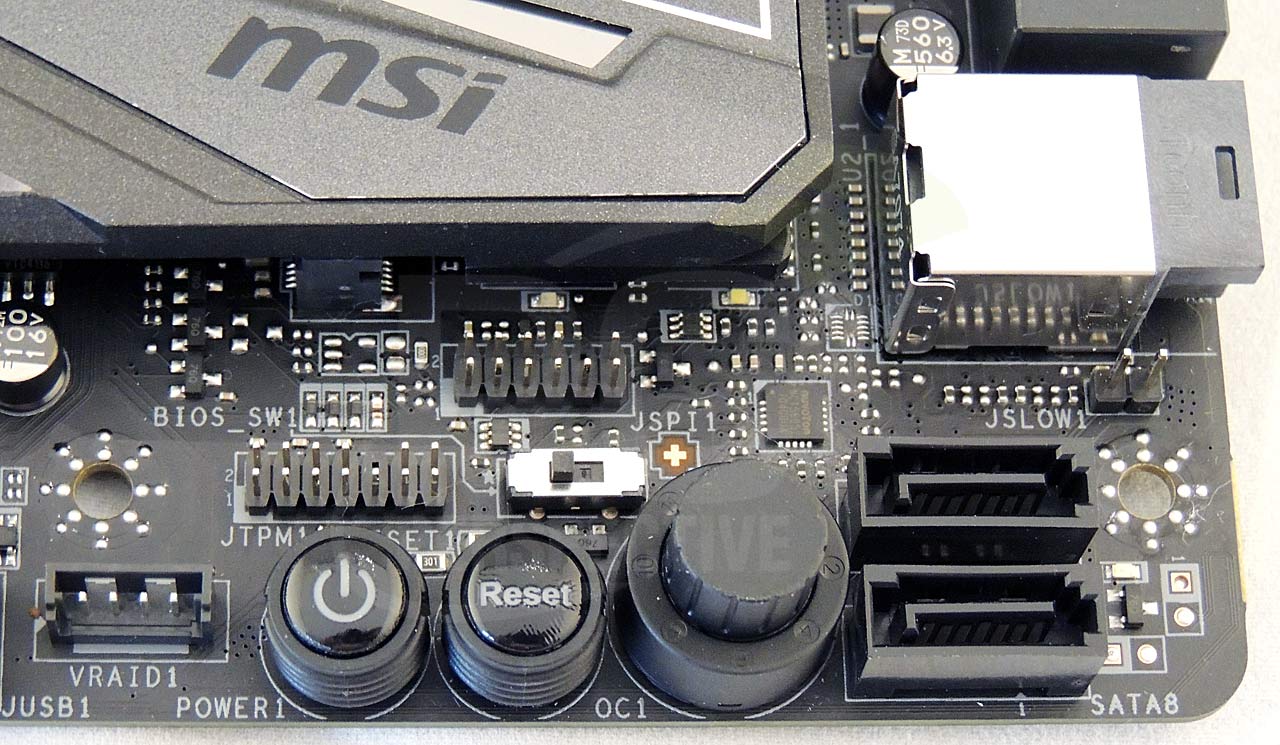 In the lower left corner of the PCB (and to the left of the chipset) are the Intel VROC header (VRAID1), and Game Boost knob (OC1), and the integrated power and reset buttons. The Game Boost knob allows manual setting of overclocking with settings labled 1 – 11 (11 being the highest). The UEFI-regulated overclocking settings support a maximum overclock of 5.0GHz with it set to 11 using an i9-7900X processor. The user manual contains a full breakdown of the speed settings associated with each of the knob steps broken down by processor type. An Intel VROC (Virtual RAID on CPU) Key can be plugged into the VROC header to unlock the chipset's VROC functionality. The Intel VROC function allows for RAIDing of M.2 and U.2 drives sitting on the board's PCIe bus – installed in the two integrated ports as well as those installed to PCIe M.2-capable add-in cards. 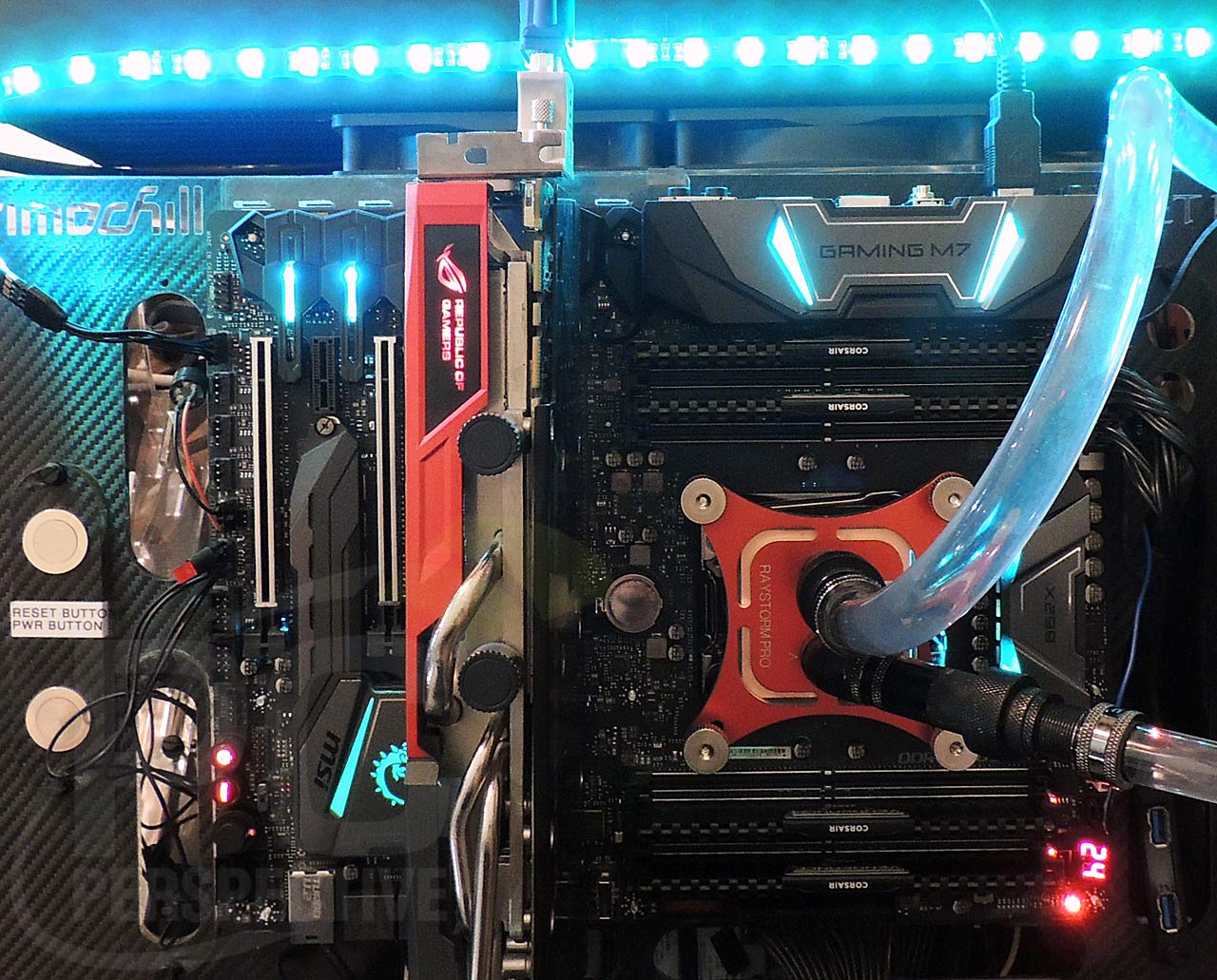