Along with the new Ryzen Threadripper processors comes a new chipset, a new socket, a host of cooler questions, memory compatibility and more. The new TR4 socket is a beast with 4094 pins in a massive footprint that makes previous processors tiny by comparison. Installation of the processor in this new socket is much more complex than other solutions as well, involving a sled, tray, dual retention brackets, and even a torque wrench. Seriously. You can see the install process in the video I posted last week below:

The new X399 chipset connects to the Threadripper processor with 4 of the 64 lanes of PCIe 3.0 from the CPU and adds support for 2x USB 3.1 Gen2 ports, 6x USB 3.1 Gen1 ports, 6x USB 2.0 ports, 8x SATA channels, and some GPP PCIe 2.0 lanes (x8). With 60 lanes of available PCIe 3.0 on the Threadripper processor even after connecting the chipset, the majority of the connectivity for graphics cards, add-in network controllers, NVMe storage devices, and anything else will be through the processor. That’s great news as it means less latency and more bandwidth between external devices and the host.

One interesting caveat that we are still exploring is how the added latency of die to die communications we mentioned above might come into play with external devices. If you have two graphics cards on full x16 PCIe connections, but one each from each of the CPU dies (each has 32 lanes of PCIe total), then in theory you would have to cross that Infinity Fabric during communications. The same would be true of NVMe SSDs running in a software RAID solution. We are still working out ways to test for this possibility, so stay tuned as we fire up the multi-GPU and multi-SSD benchmarking.

Motherboards based on the X399 chipset will be available from all the vendors you would expect: ASUS, MSI, Gigabyte, and others. Expect these motherboards to come with a similarly high prices, similar to what the Intel X299 and X99 platforms garner. Features like 802.11ad and 10Gb Ethernet will flourish here, but you are going to pay for those flagship features. Being able to utilize all of the connectivity that Threadripper provides means integrating technologies that we just haven’t seen yet. 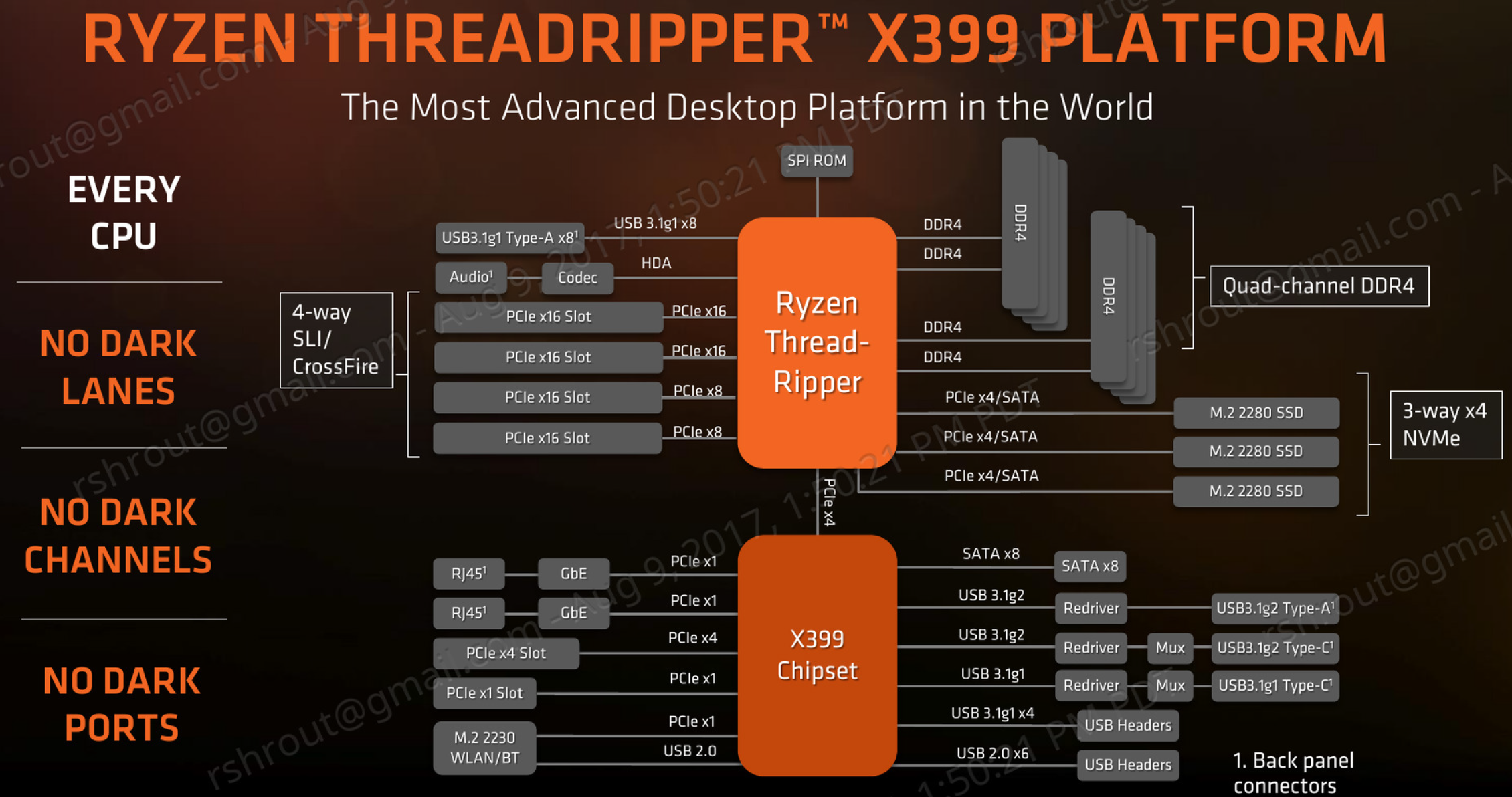 We have confirmed that X399 and the Threadripper CPU do not support NVMe RAID natively and you want to double or triple your NVMe storage, you are going to be stuck using Windows software RAID. While that is fine for most users, it does mean the array will be non-bootable – kind of a bummer for an otherwise top-of-the-line configuration. AMD tells us they are working on a solution to integrate on-chip array capability but it is not an easy task; just ask Intel and its partners that have been struggling to get it perfect for a year or more.

There was a lot of concern over the stability and maturity of the X399 chipset and motherboards based on after the Ryzen 7 and X370 launch. I am happy to report that through a couple of weeks of testing and banging on it, our ASUS X399 Zenith Extreme motherboard has been rock solid, with no crashes and no stability concerns that weren’t related directly to overclocking. Drivers seem to be working, the headaches and confusion around memory support have been ironed out, and it just feels like a more robust system than Ryzen did at launch. Clearly the team at AMD has learned from that situation, and it worked with board partners to help make today’s release a solid one. No doubt that engineers from ASUS, MSI, Gigabyte, and others have a bit more time with the architecture under their belt as well, adding to the improvement.

Memory support for Ryzen Threadripper is listed in the reviewer’s guide as follows:

The highest memory speed supported without “overclocking” is 2667 MHz, and that is when running four DIMMs (one in each channel) that are single rank. If you want to populate all 8 DIMMs on Threadripper with single rank modules you will be limited to 2133 MHz, a significant reduction. Moving to dual-rank modules those speeds are 2400 MHz and 1866 MHz. Ouch. Thankfully, overclocking the memory on these platforms does not yet appear to be a concern. I have been running four DIMMs (single rank) at 3200 MHz on Threadripper without a hiccup and the performance improvement has been impressive. Just as we found with Ryzen, memory speed matters more here than on any previous AMD or Intel platform.

With a 180-watt TDP, cooling the Ryzen Threadripper is going to be a critical task. The heat spreader on the CPU is massive, unlike anything we have seen before in the consumer space. Luckily, AMD is telling us that it’s not imperative that users cover the entire area to get effective cooling. In our experience, that is definitely the case. AMD sent along a brand new Thermaltake water cooler with a 360mm radiator that uses a standard Asetek “teeth” style mounting bracket. Using the bracket that came with the Threadripper CPU, mounting the cooler was as simple as any other platform, with more concern over the placement of the thermal interface. Kyle over at HardOCP has already done a great job looking at the surfaces, mating process, and TIM application if you are interested in more. 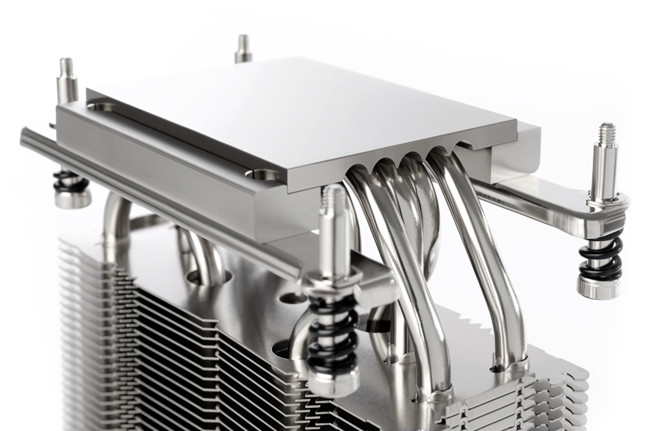 Full coverage coolers are on the way, as you would expect, though I don’t think we will see them in large volumes. Because the larger size would likely preclude the same coolers from working on other motherboards, going all-in on a Threadripper cooler would be a risky proposition. Instead, I expect to see the likes of Corsair and others doing a lot of in-house testing to find the best way to adapt coolers to the TR infrastructure.

Measuring the thermals of Threadripper still requires knowledge of the idea of an offset. The Threadripper processor, like Ryzen 7/5/3 before it, tracks two different thermal sensors.

The earliest BIOS’ we encountered only reported the Tctl temperature to us which idles at around 55C. Taking into account the offset, our CPU was running at around 28C at idle state – more in line with expectations. AMD recommends using HWiNFO v5.55-3210 (or later) for temperature monitoring as it has built in support to compensate for the offset for Threadripper.

If you want a deep dive into temperatures on Threadripper and even the best way to apply thermal paste, I recommend you watch this 22 minute discussion on it from our buds over at Gamers Nexus. It’s definitely worth the time.

For what we have seen using the HWiNFO64 application, the AMD Ryzen Threadripper processor definitely will be a hot and power hungry CPU. Using the supplied 360mm cooler from Thermaltake that shipped with our review kit, temperatures weren’t really a concern during standard testing, even after extended periods of full utilization. 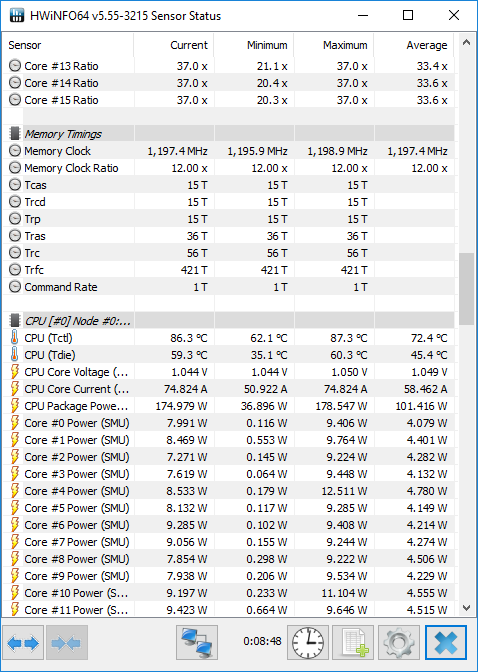 Remembering all the way back to the first page of our story, Threadripper has a 27C offset between the Tctl and Tdie measurements to help fan and cooling systems better manage temps. Under a full load of Blender, the 1950X stabilized at a temperature of 59.3C. That’s good considering the high core count and the inability to cover the full heatspreader for today’s cooling solutions. 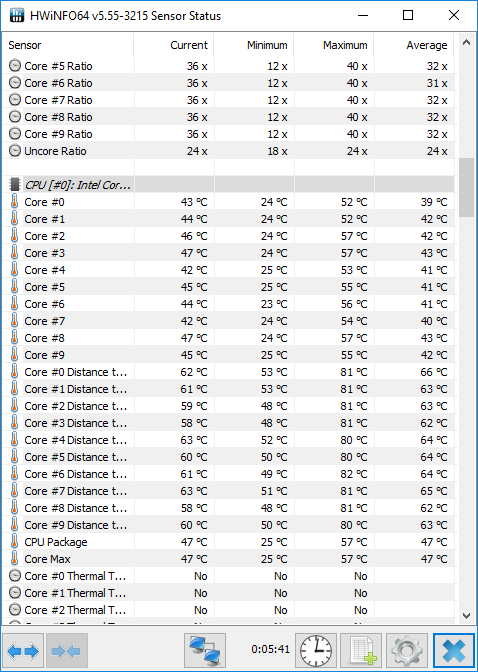 For comparison, the 7900X is using a 240mm cooler but still maintains a temperature under 50C when not overclocked.

With a 180 watt TDP, buyers should not underestimate the cooling capacity needed for Threadripper. Expect to need at least a 240mm radiator liquid cooler, but I would assume anyone considering a $999 processor would be going down that path anyway. 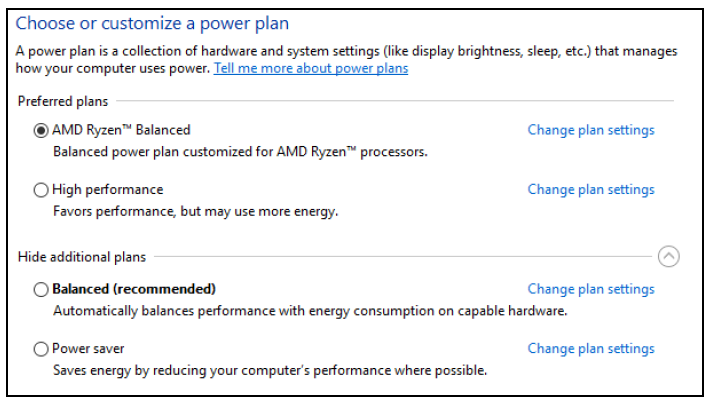 AMD still maintains the Ryzen power plan for Windows to help optimize the CPU states for best performance without sacrificing power consumption drastically. We did testing of this power plan back in April with Ryzen 7 and found that it did indeed help performance in some cases with changes made to help minimize the parking of cores, and to also speed up the waking of them. If you install the latest AMD driver package, this profile will be automatically installed on your system and selected. As far as I am aware, no changes were made to this profile to adjust for the NUMA/UMA memory configuration. 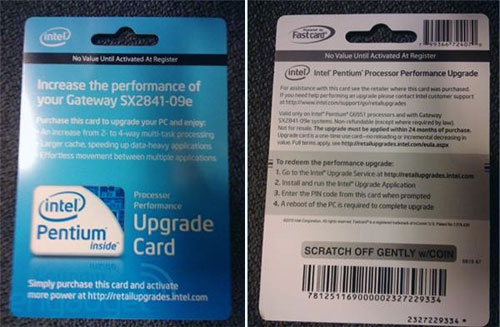