There will be an interesting debate surrounding the gaming performance of Ryzen Threadripper. With the release of the Ryzen 7 family there were valid discussions about the difficult the processor had handling 1080p gaming due in large part to the latency of memory access that we discussed previously. Let’s be up front here: the same issues exist at 1080p resolution gaming for Threadripper and in fact, they may potentially be worse in situations where the game threads are distributed across the two dies.

While I argued for the importance of 1080p gaming for Ryzen 7/5/3 due to the processor price points in $200-500 range, I think it’s fair to argue against the value of 1080p performance testing for a CPU at $800-1000. The type of consumer that is purchasing a Ryzen Threadripper CPU is going to be an extreme enthusiast and/or a prosumer content creator, and the likelihood of that person being restricted to a single 1080p screen seems unlikely. Instead, I would expect 4K displays, ultra-widescreen 21:9 monitors, and maybe even multiple displays in EyeFinity or NVIDIA Surround. 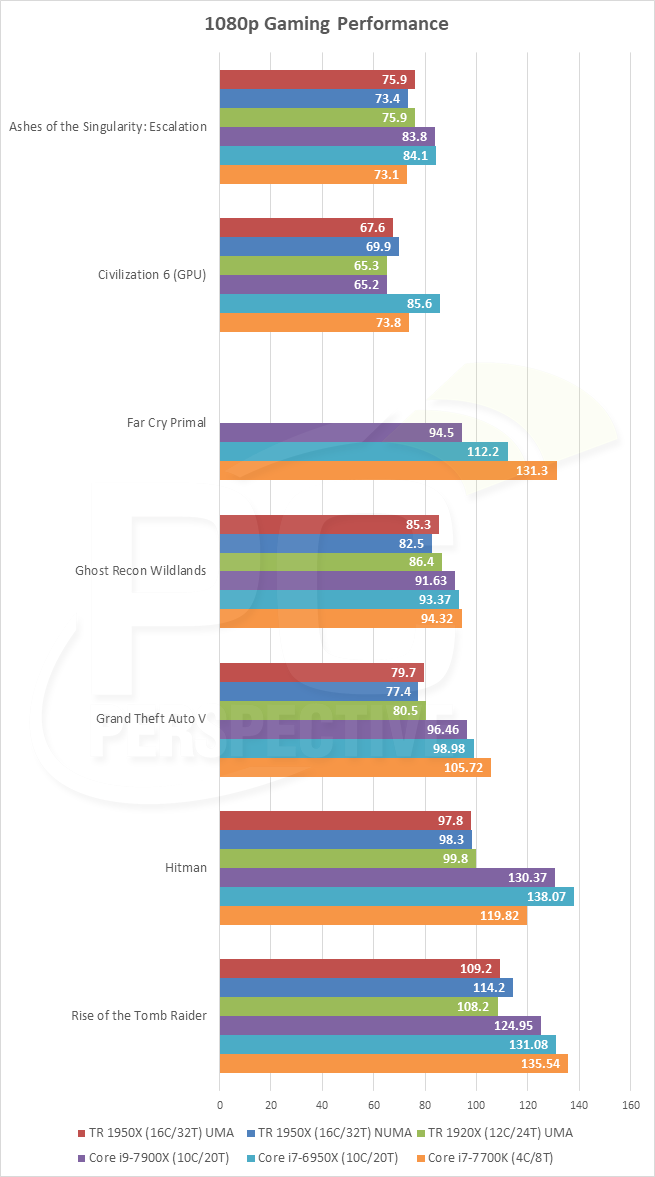 Looking at a large array of data points, the 1080p gaming performance story for Threadripper is good, but not great. In general, Threadripper is slower than Skylake-X, Broadwell-E, and plain old vanilla Skylake. That gap ranges from pretty close (Ashes) to not close at all (Hitman, -32%) with some other oddities that stick out. Far Cry Primal does not run on the stock system of Threadripper due to the >20 logical cores bug we talked about on the first page. Also, Deus Ex: Mankind Divided shows consistently confusion results for us, but in a very repeatable fashion. For some reason, all of our Intel systems are running the game around 43 FPS while Threadripper is near 65 FPS. To be clear, I do not believe this is a reflection of the actual gaming performance or capability of any of the test systems, but rather…some dumb software glitch we can’t figure out yet. 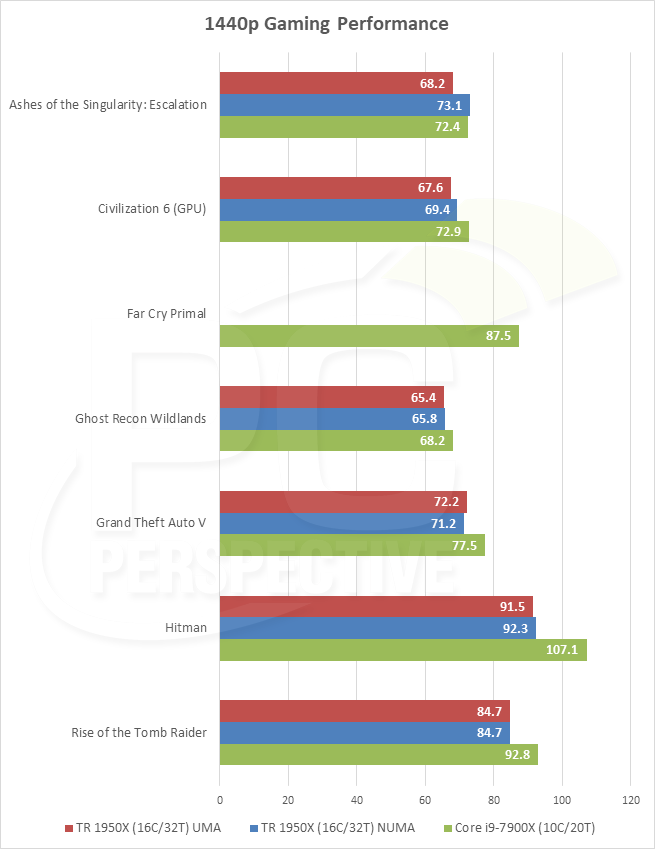 At 2560×1440, the game performance results for the Threadripper 1950X are more consistent but the Core i9-7900X is still slightly ahead in all tests except Ashes of the Singularity. The gaps range from 17% (Hitman) to 9% (Rise of the Tomb Raider) and 4% (Ghost Recon Wildlands). Users gaming at 2560×1440 is a much more reasonable assertion for the Threadripper market and even here we can see that if gaming comes first for you, the 1950X falls just behind the 7900X. 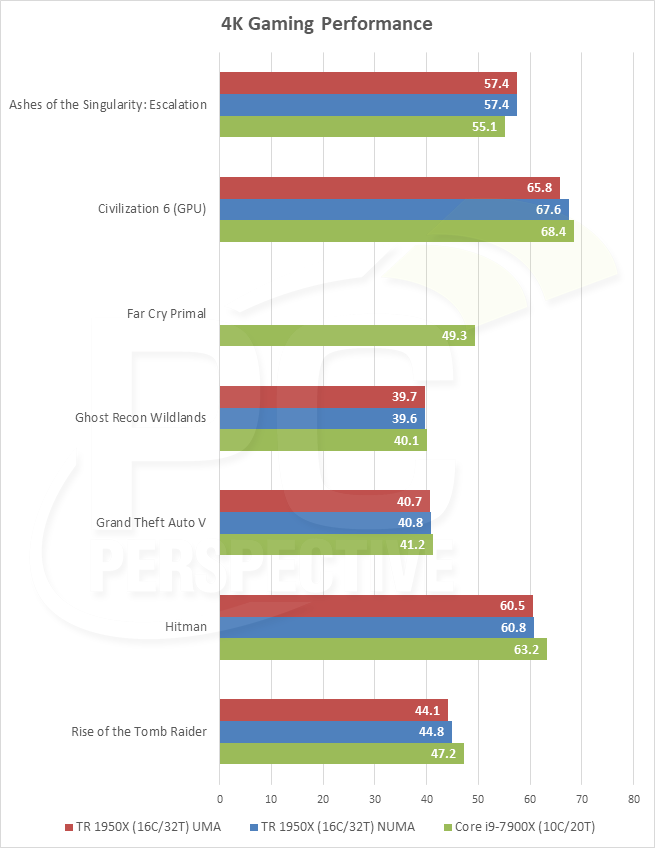 So, what does this mean for the 1950X and the Ryzen Threadripper platform when it comes to gaming performance? On one hand, if you want the pinnacle of gaming performance for your PC, the Threadripper is not going to be that platform. It has some of same technological deficits that the Ryzen 7 CPUs exhibited that hold it back just enough for it to come up as a topic of discussion among enthusiasts. But to be fair, Skylake-X and the Core i9 family from Intel is also not the pinnacle platform for a PC gamer. Honestly…that remains in the hands of the Skylake mainstream LGA1151 processors that peak per-core clock speeds. As game engines and developers shift to a more highly threaded mindset going forward, I do expect higher core count CPUs like Threadripper to increase their status for gaming exclusively, but for today, that’s not in the cards.

But that is something we should have known going into today’s review. Ryzen wasn’t the “king of gaming” and going even higher on core counts was never going to magically improve that. What AMD has built with Ryzen Threadripper is one of the most impressive content creation, rendering, development platforms we have ever seen, that also happens to be pretty damn good for gamers as well. I strongly believe that most of the video producers, software developers, and transcode nuts will be more than will to sacrifice 5-8% on average gaming frame rates for the improvement in their highly threaded workloads. To put it succinctly: AMD Ryzen Threadripper is built for content creation first, and gaming second. And its performance in our testing today proves that out.

When utilizing Ryzen Master software, users will find a switch to toggle between Creator Mode and Game Mode. The Creator Mode enables UMA/Distributed memory mode and keeps all cores enabled. (This is identical to the performance settings we used in general benchmarking on the following pages.) The Game Mode enables NUMA/Local memory mode and also enables Legacy Compatibility Mode. Remember that Legacy mode actually disables half of the cores on the processor, leaving one CCX fully enabled per die, for a total of 8 physical cores and 16 logical cores. This removes the issues with games crashing or not loading with more than 20 threads on the system, but it does mean you are missing half of the processing power of your Threadripper CPU for non-gaming tasks.

We did game testing at 1080p, the area that we would assume to find the most variance between the two modes, with our standard testbed including a GeForce GTX 1080. 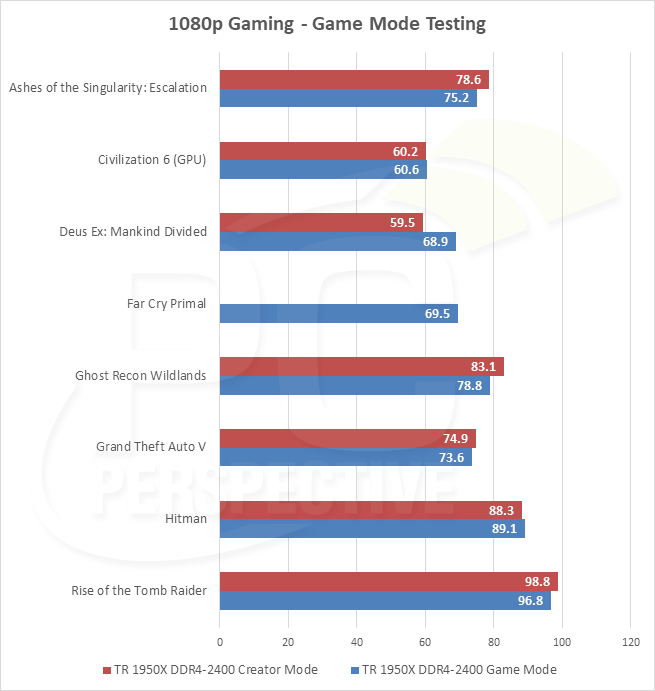 The only game that showed significant improvements in Game Mode is Deus Ex: Mankind Divided, which gets a 15% boost! Other than that, the differences between the two modes are minimal at best. Ashes of the Singularity gets an improvement in Creator Mode of 4.5%. In checking with AMD, this more or less matches their expectations. Even though I do not believe that Game Mode is a reasonable use for the Threadripper platform, AMD is doing its best to provide the ability for consumer to tweak and customize the hardware to a range of specific requests.

I'll be up front here and tell you that the testing results below are very much a work in progress. The idea behind mega-tasking testing is to push workloads to their limits by overlapping. What happens when a rendering task is occurring at the same time you are gaming? What if you are compiling a project in the background while gaming? These are more common scenarios than you might believe for people that work and game on the same machines.

We attempted to create our own scenario for mega-tasking, though I was trying to keep the Urban Dictionary definition in mind as I did it:

Our test consisted of running our Blender render of the Gooseberry workload in the background of our machine and then to start up Rise of the Tomb Raider at 2560×1440 and do some gaming. We played the games the entire time the render was running (using dual monitors to keep an eye on it) and measured both the time to complete the render and the average frame rate of one of the last 60 second blocks of time before the render finished. I compare that to the non-mega-tasking performance in Rise of the Tomb Raider. 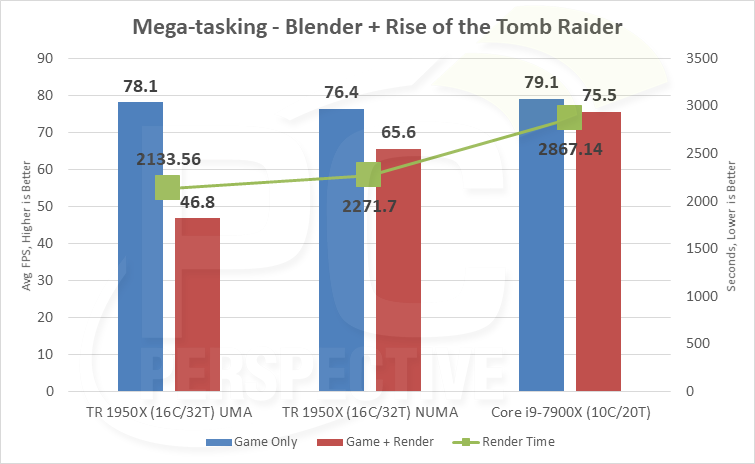 With the Core i9-7900X, performance of the game with and without the rendering running in the background was consistent and smooth. For the 1950X running in NUMA/Local mode, performance does drop some in RoTR (15%) but the game remained smooth and provided an excellent gaming experience. However, the 7900X took almost 10 minutes longer to complete the rendering workload, more than 25% slower than the 1950X. Also note that compared to running the Blender render alone, the AMD system only took 15% more time when adding in the game session. The 7900X took 31% longer when we added RoTR to the mix.

Our experiences when the 1950X system was in the UMA/Distributed mode were much different. The average frame rate of the game dropped tremendously but the experience in the game was awful, stutter and freezing were abound. Clearly the compartmentalization of the NUMA mode helps in this mega-tasking situation.

This is the kind of testing we want to expand on going forward with ultra-high-core count CPUs. Much more to discover!