Perhaps more interesting than the A11 Bionic’s additional CPU horsepower is the inclusion of Apple’s first in-house GPU – though the A10 Fusion contained a mysterious, custom GPU as well (discussed in detail in this excellent write-up from David Kanter last October). In any case, Apple has now officially severed ties with Imagination Technologies, makers of the PowerVR GPUs found in Apple’s previous SoCs, and once again Apple has avoided divulging technical details surrounding their mobile parts so exact details on the GPU were not announced – though TechInsights has an ongoing teardown that indicates another 6-core GPU design. 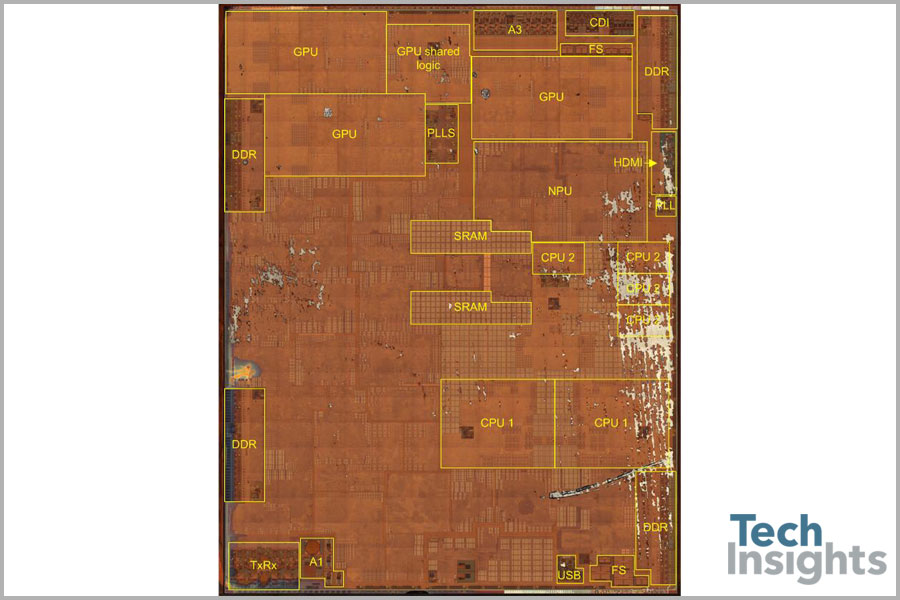 What is the result of Apple's secretive efforts? A11 Bionic's GPU is extremely powerful. Just take a look at these results: 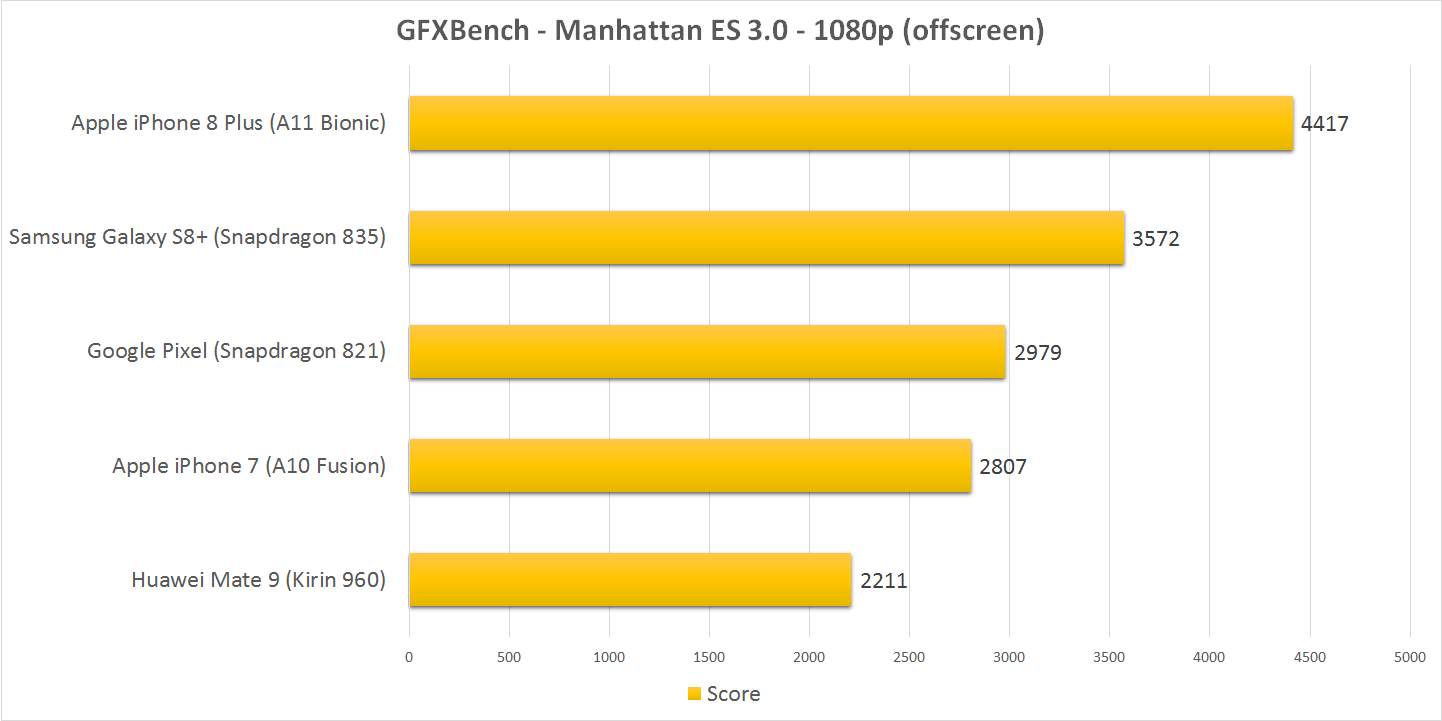 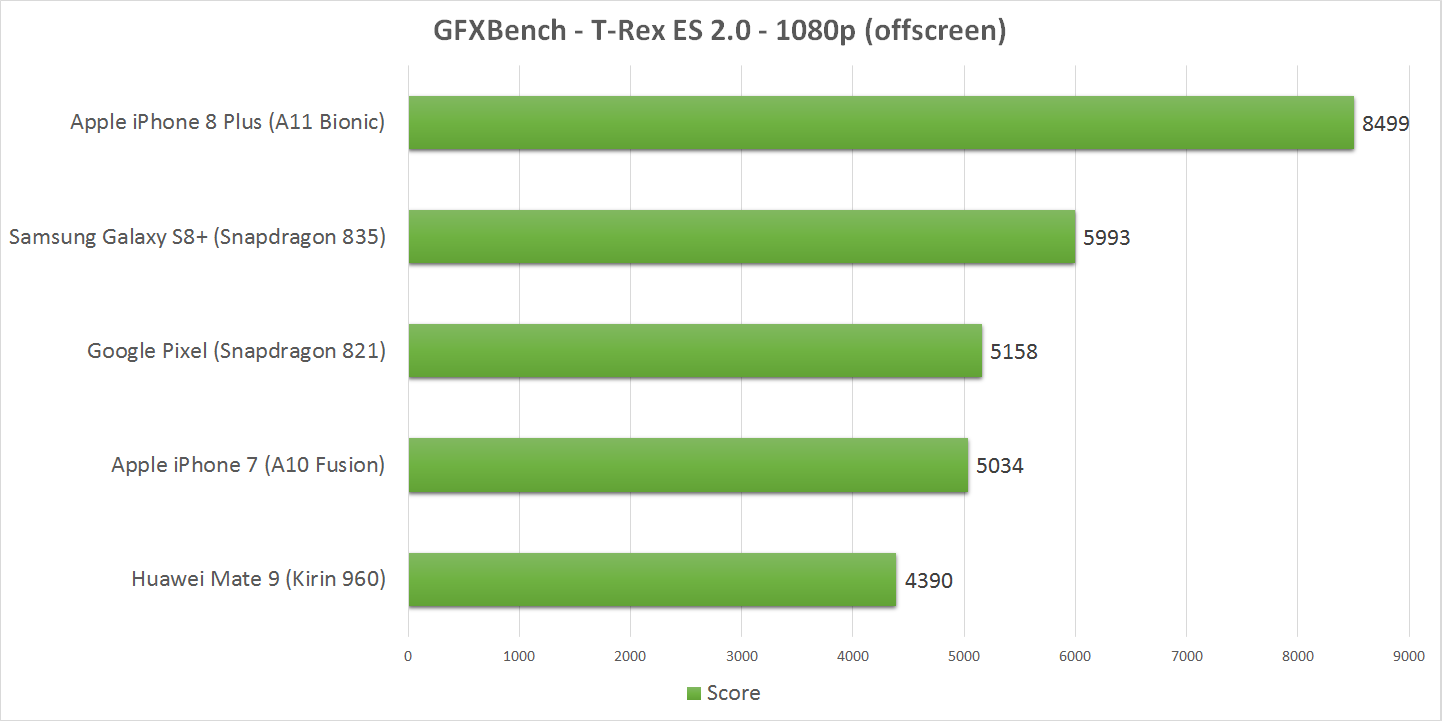 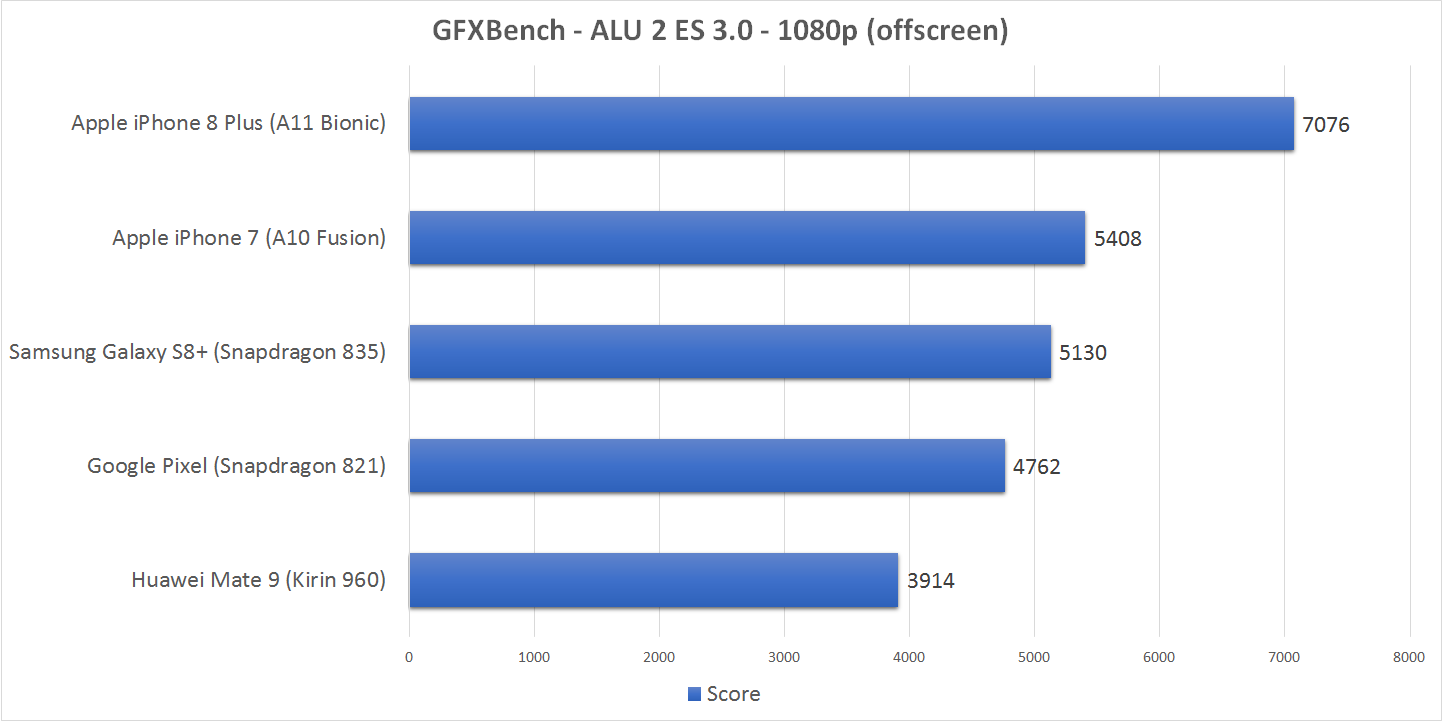 Offscreen 1920×1080 results with OpenGL ES 2.0 and 3.0 are staggering, easily surpassing not only Apple's previous best but even the Snapdragon 835's mighty Adreno 540 in the GFXBench tests.

Next we have a look at the graphics portion of Basemark OS II, which is another fully cross-platform mobile benchmark: 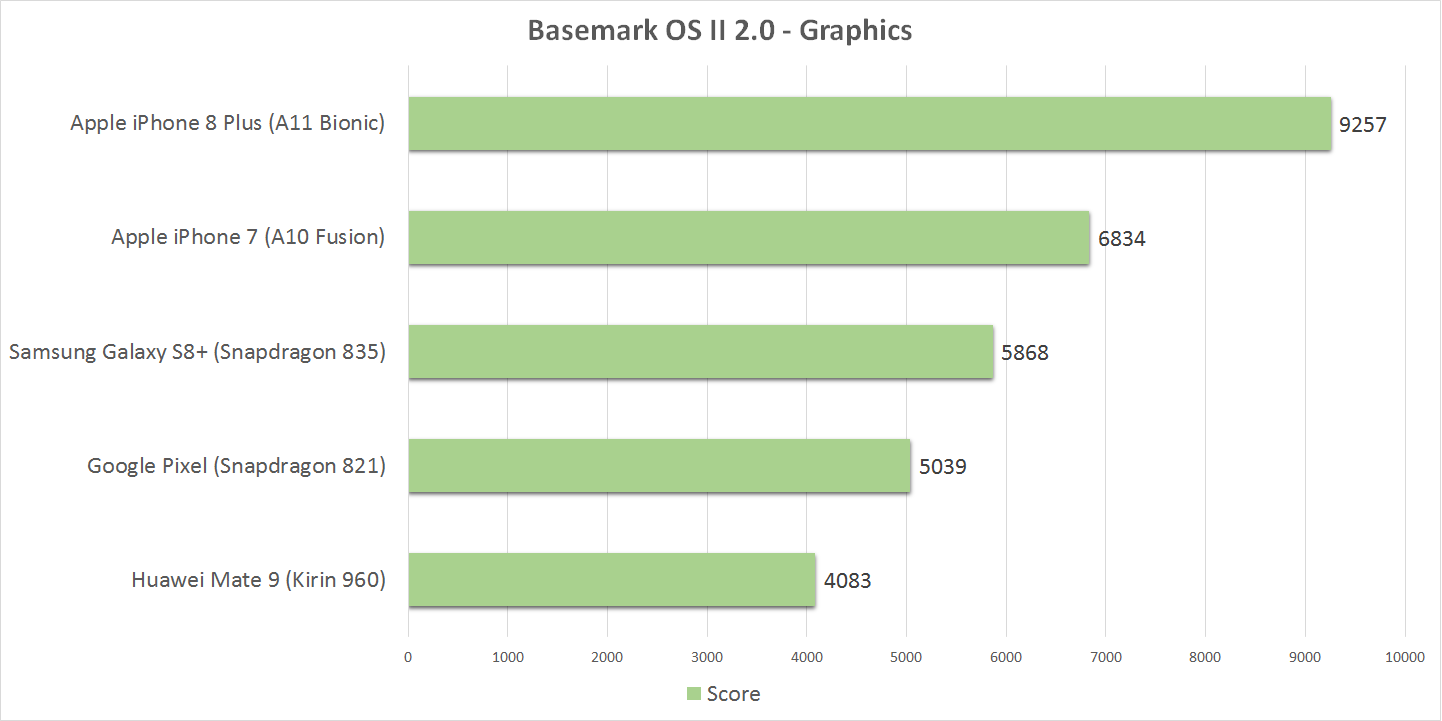 Another big victory for the A11 Bionic's GPU, with the A10 Fusion in second place. To me these results actually suggest an advantage for Apple based on their comparatively lower display resolutions, with flagship Android handsets such as the the Pixel and GS8+ at or above QHD. The offscreen 1080p tests from GFXBench above should provide a more balanced assessment of performance, as they are not dependent on native screen resolution.

3DMark is next, and here the balance shifts somewhat when using the standard versions of the tests. It's worth noting that Sling Shot is rendered at 1920×1080 before being scaled to the display resolution, and only by running these tests in "unlimited" mode can display scaling-related performance differences be avoided. 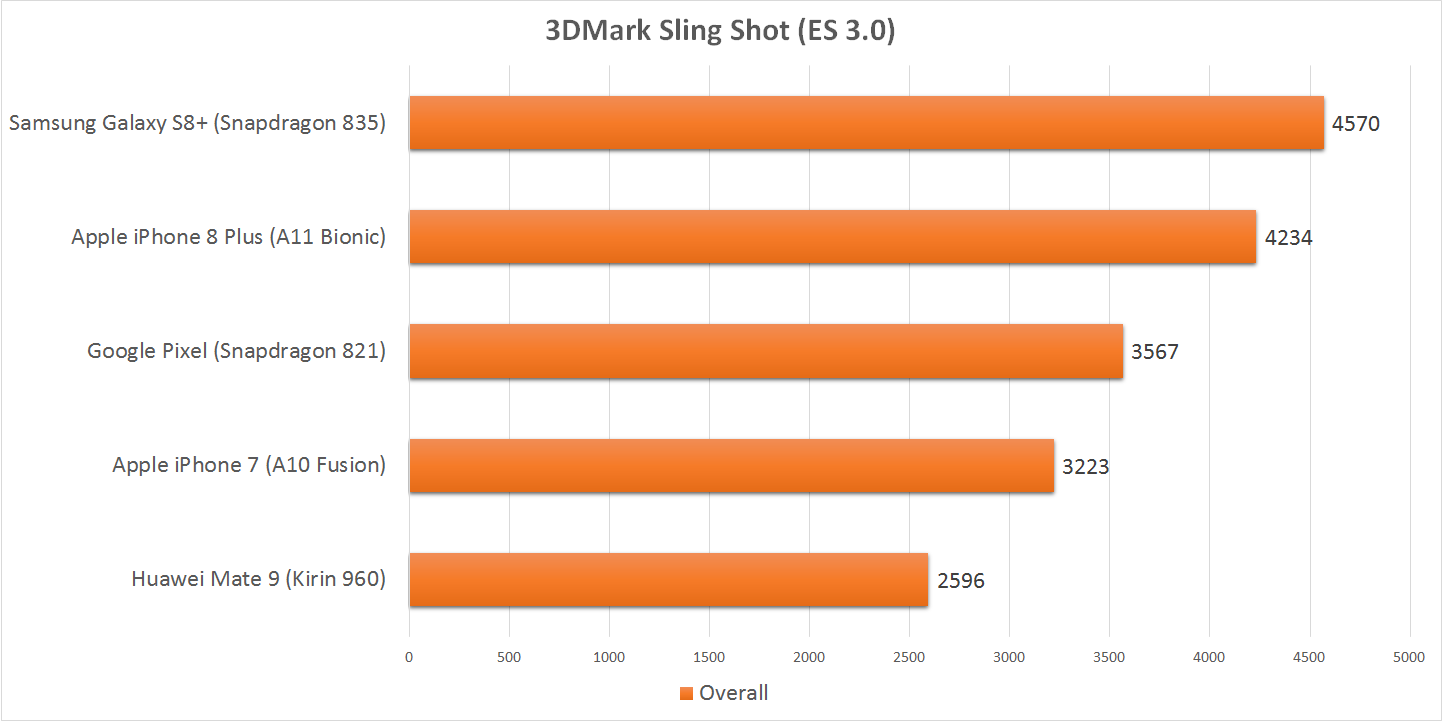 The A11 Bionic is still above Apple's previous best, but in this OpenGL ES 3.0 test Qualcomm's Adreno 540 is still on top. One of the aspects of Apple's platform that has been shifting in the last couple of years is graphics API, as Apple skipped ES 3.1 support in favor of their own API. How does this compare? We ran the Sling Shot Extreme benchmark, which uses ES 3.1 on Android devices and Apple's proprietary Metal API on iPhone. 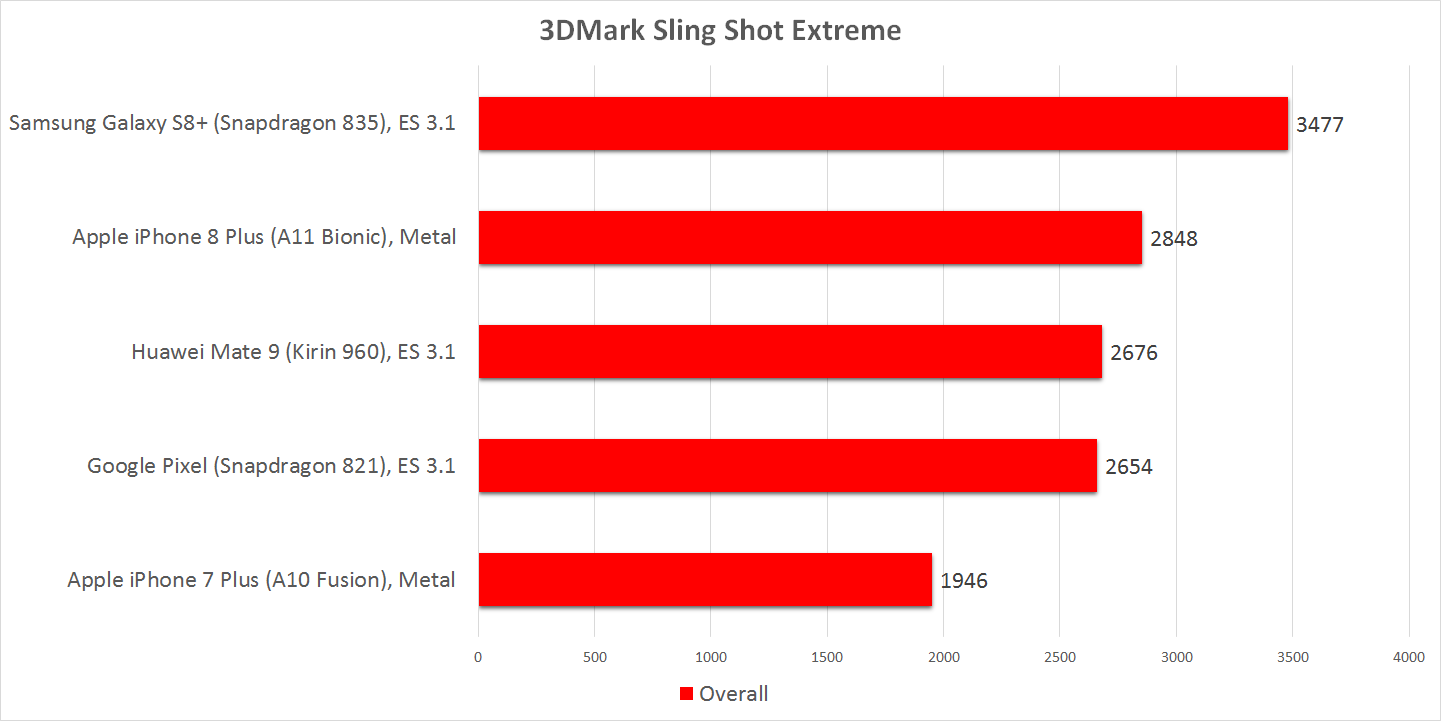 Here the Adreno 540 is again on top, but the difference between last year's A10 Fusion and this new A11 Bionic GPU is remarkable. If you are an iOS user this is exciting news – though in this particular benchmark suite Apple trails Qualcomm's best option by a significant margin. Part of this is likely due to the fact that the Extreme version of Sling Shot is rendered at a full 2560×1440 before display scaling.

Next, we'll take a look at the 'unlimited' versions of both Sling Shot tests, and this time it is a new Galaxy Note8 providing the Snapdragon 835 results rather than the GS8+. The results are also more granular this time, with a look at each component of the benchmark score (graphics, physics): 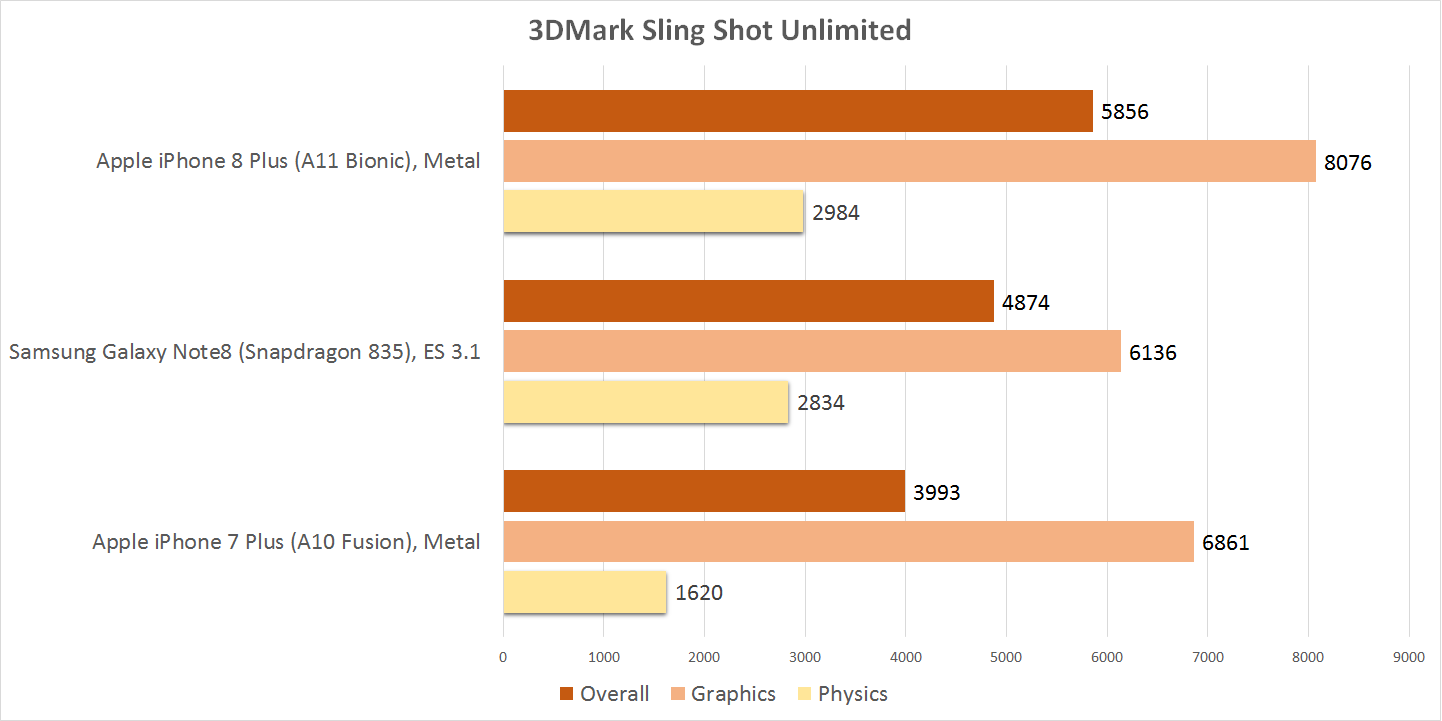 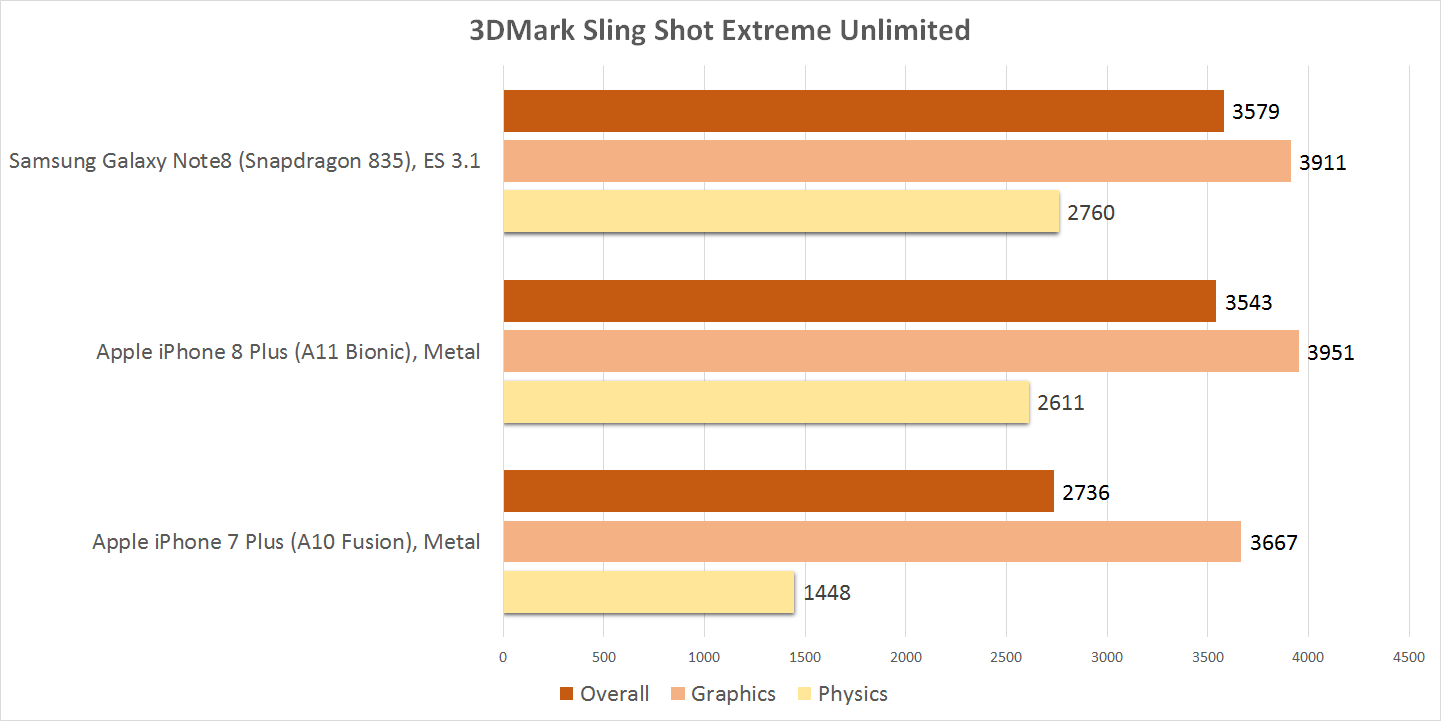 Bypassing display resolution and scaling provides what should be a more accurate look at the comparative performance of these mobile platforms, and things are certainly a little closer between the Adreno 540 and the A11 Bionic GPU. Apple is on top with the standard Sling Shot test (1080p), and with the extreme test (1440p) the Adreno holds on for its first victory.

Finally, let's have a look at this A11 Bionic GPU against the same Intel Kaby Lake processor from the first page. Processor graphics are not impressive as a rule, but against a mobile GPU it should be a little more interesting. Once again the Snapdragon 835 is included for reference: 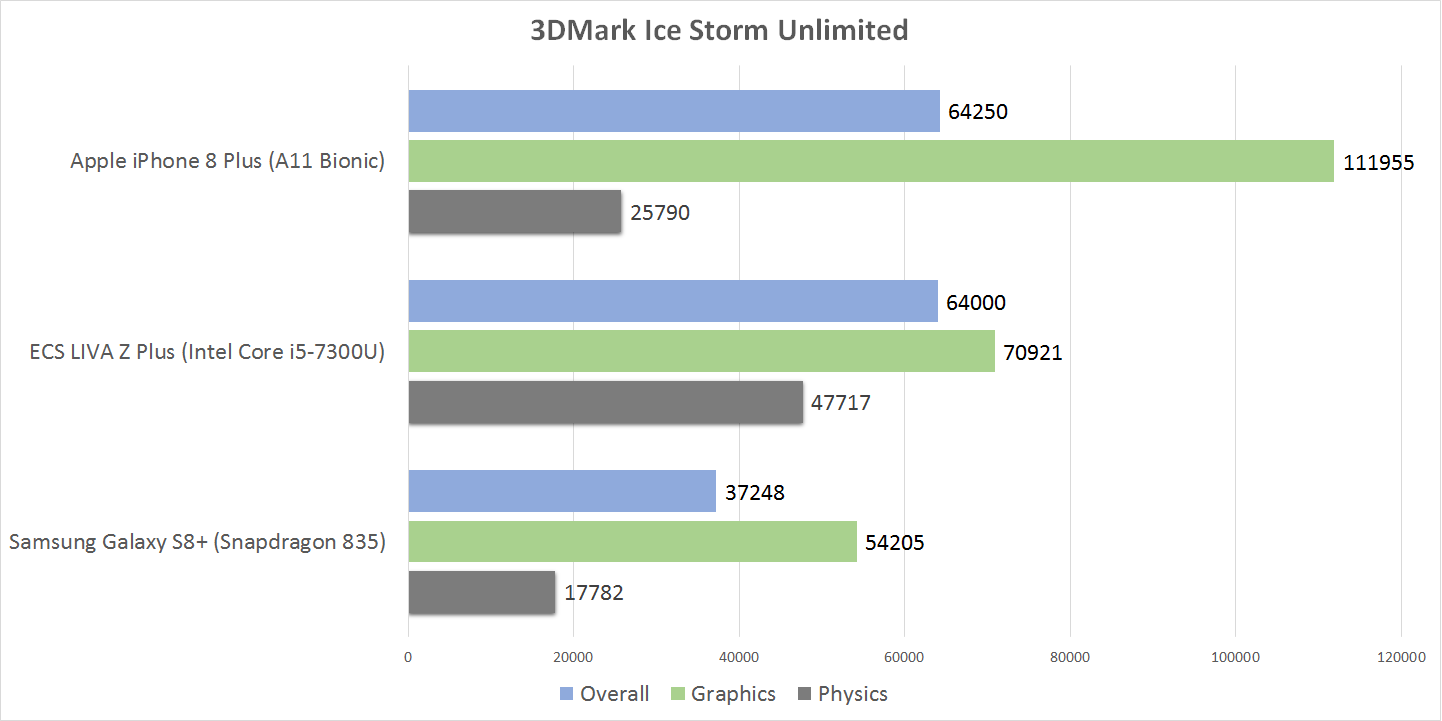 The A11 Bionic provides significantly higher graphics performance to edge out the i5-7300U (Intel HD Graphics 620) in the overall score, though the physics test shows a clear advantage from Intel. The Snapdragon 835 lags far behind in all categories here. Clearly a new standard for mobile platforms has been set by Apple, and it will be interesting to see how the industry responds.

It's a safe bet to call the A11 Bionic the fastest mobile processor in the world. Of course, certain aspects of the A11 Bionic platform's performance will require extended hands-on testing, including network performance and battery life. The latter is an area where the iPhone 7’s A10 Fusion was disappointing, with lackluster overall battery life for a flagship device – both in controlled testing and everyday use. While Ryan has completed a battery test on an iPhone 8 Plus – with a very impressive 9 hours 40 minutes from our wi-fi benchmark (two hours better than our iPhone 7 Plus was able to achieve) – it remains to be seen if areas such as standby power draw are improved over the previous platform, and that will require some additional testing. 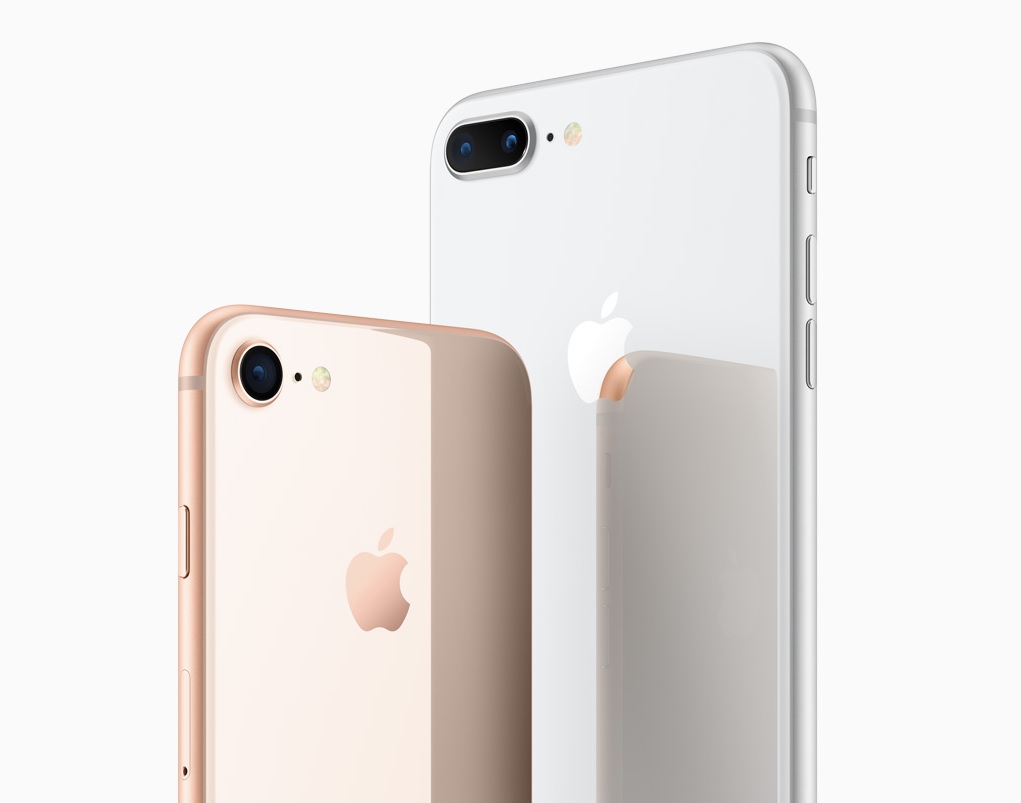 Externally not much has changed with the iPhone 8 and 8 Plus, which now have glass backs

A full review of the iPhone 8 Plus is upcoming, as this author is now in possession of a new handset and will begin daily use for the next couple of weeks to see if the iPhone 8 is worth the upgrade over an iPhone 7 – though with the iPhone X coming by year's end it feels a bit like a stopgap. However, with its fantastic performance from the A11 Bionic platform and an MSRP $200 lower than the iPhone X ($799 vs. $999 for a 64GB capacity), this iPhone 8 Plus might offer enough to be a compelling alternative to the iPhone X – especially if one has grown accustomed to the fingerprint sensor that is conspicuously absent from the upcoming flagship.

Stay tuned for our full iPhone 8 Plus review!

Take a good look, you won’t see this one for a while