Ideally, a motherboard supports the full performance of all connected hardware, staying out of the way while providing a stable base. Overclocking requires something of a different approach to motherboard design, with more reliance on the board to provide the stability from a given processor or memory. I only performed some basic overclocking (summary a little later on), and for benchmarking I ran three of the most common benchmarks for CPU and system performance: Geekbench, Cinebench, and PCMark 8.

We'll begin with Geekbench 4 and the overall single and multi-threaded numbers, which provide a good baseline for expected CPU performance. 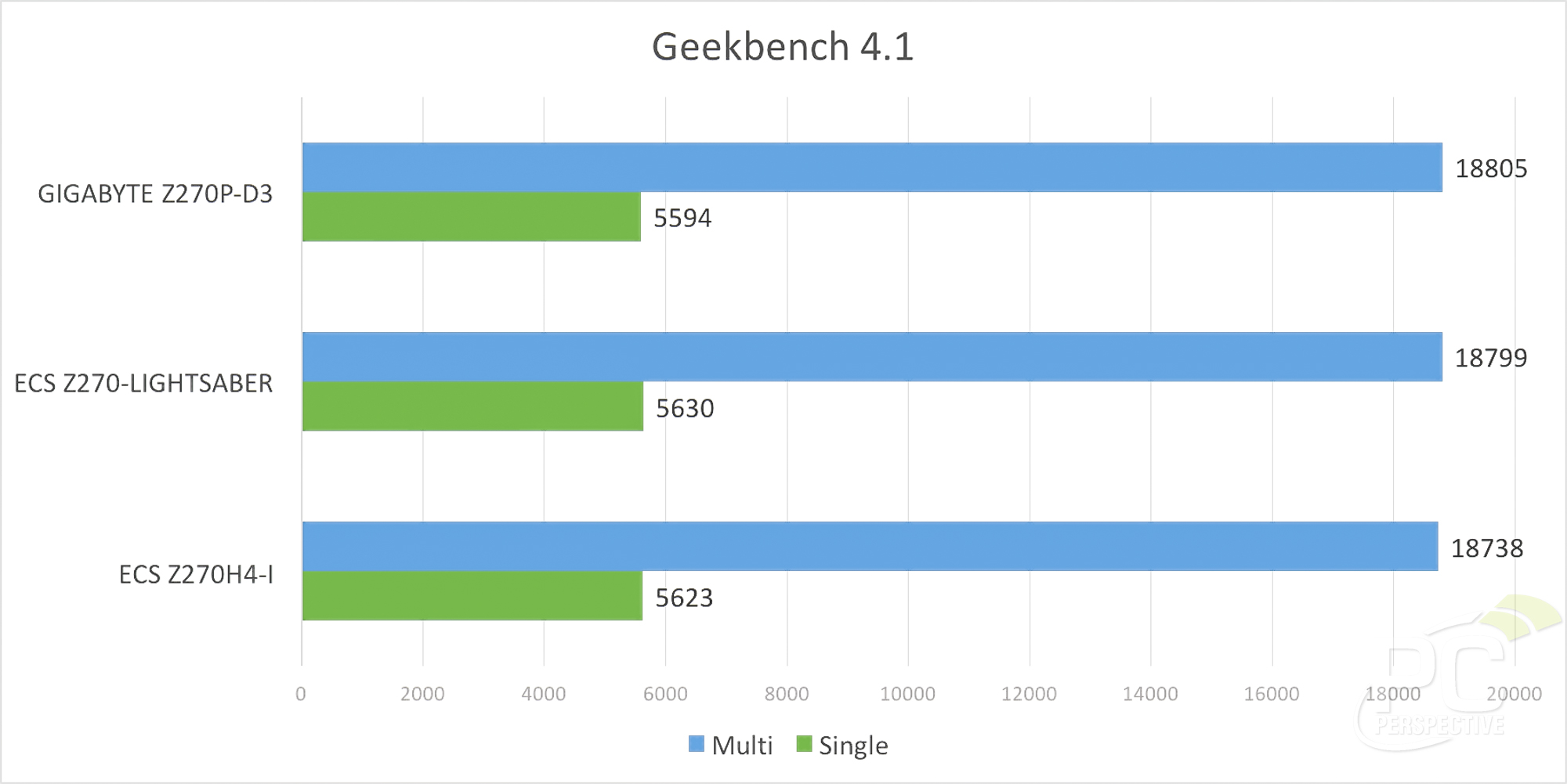 Here just 6 points separates the multi-threaded result with the LIGHTSABER from the GIGABYTE board tested for comparison, and the Z270H4-I is slightly behind. In single-threaded, however, both ECS boards consistently offered a higher result (scores are based on the average of three runs).

Now we move on to Cinebench R15, and switching to advanced mode I ran the test three times each for single and multi-threaded modes, averaging the results: 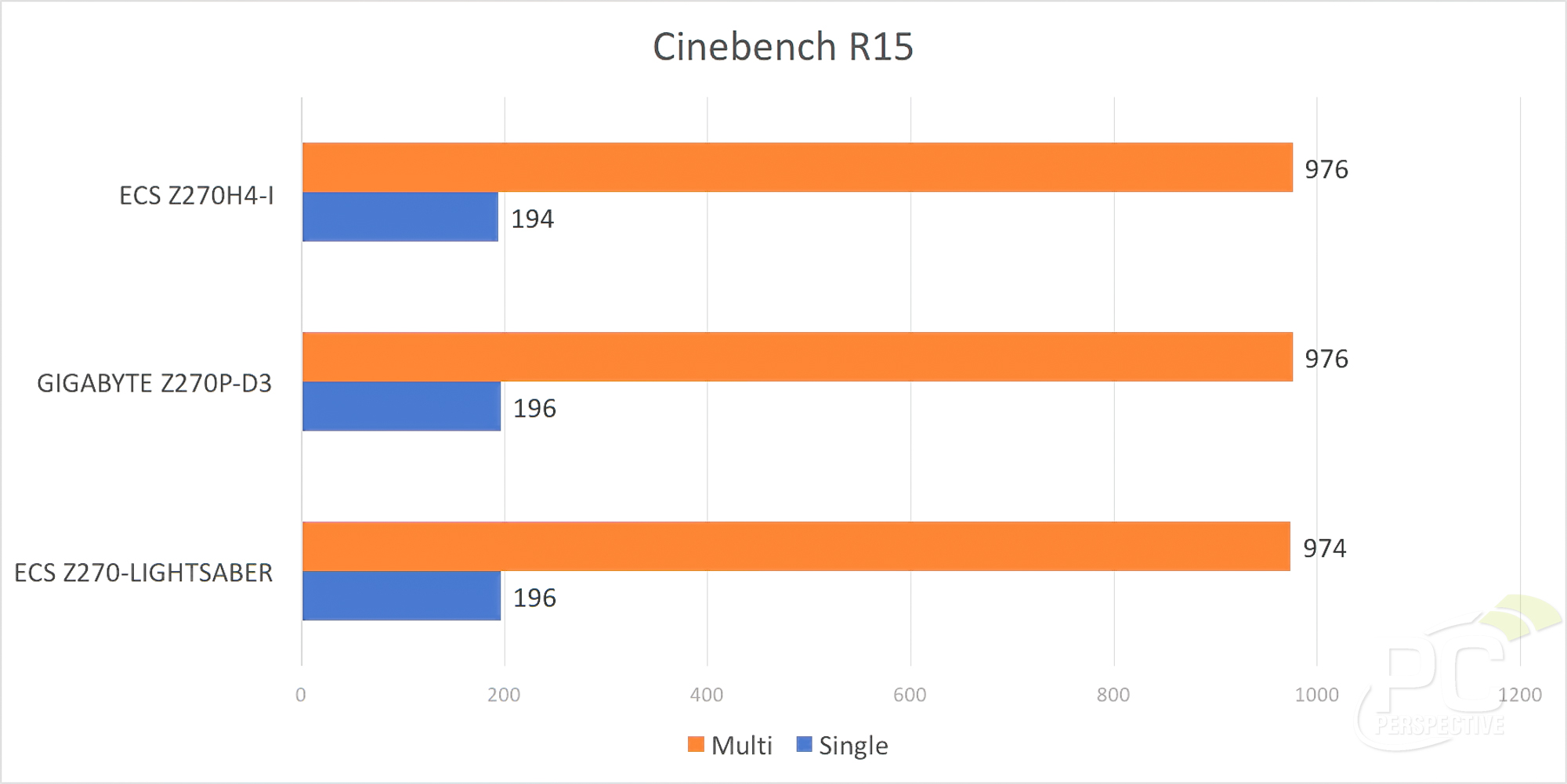 As you can see Cinebench was pretty flat accross the board, with a slight variance in a couple of results that produced a difference of only 2 points. Certainly the Intel Core i7-7700K's performance was pretty consistent regardless of motherboard. But what if we move past just CPU, and test overall system performance?

To see how the entire system (with 8 GB of 2400 MHz DDR4 and a Samsung SM961 NVMe SSD) performed with the same i7-7700K processor on these motherboards, I next ran PCMark 8. This benchmark is where we should expect to start seeing some more variance, as PCMark attempts to provide a picture of overall system performance, and not just CPU power. I chose the conventional mode (which do not use OpenCL acceleration), with results below for Home, Creative, and Work benchmarks: 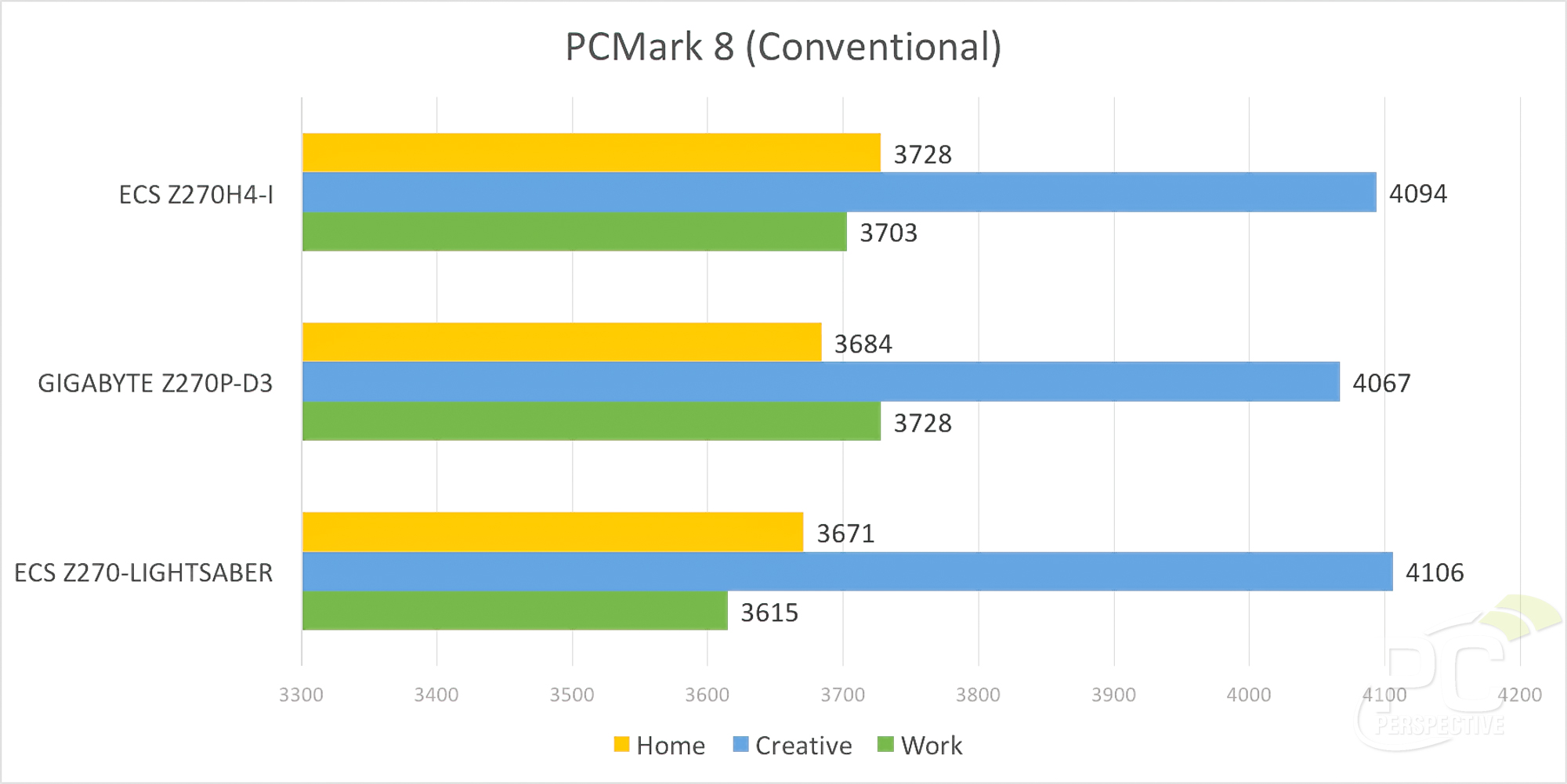 The results are pretty mixed, as you can see. For example, the highest Creative score belonged to the Z270-LIGHTSABER, but its mini-ITX sibling was faster in the Home test, and the GIGABYTE board took home the Work crown. Overall the performance of the Z270H4-I was a little more impressive than that of the Z270-LIGHTSABER in PCMark 8, as it leads in all but the creative test (in which it trailed by only 12 points).

Overclocking was not something I delved very far into, but I did at least quickly attempt to see how far I could easily push the Core i7-7700K processor I used for all benchmarking. With the Z270-LIGHTSABER there is an automatic OC function, as well as the usual manual controls available in the UEFI setup. I tried both, first getting a stable 4.7 GHz by pressing the OC button on the board, and then 4.8 GHz with manual control. I was not successful in hitting 4.9 GHz or above with any stability in my brief testing, but my 4.8 GHz overclock (on all cores) was rock solid in stress testing on the LIGHTSABER.

I didn't have big overclocking expectations from the mini-ITX Z270H4-I, which has a slimmer power delivery than the Z270-LIGHSABER (6 phase vs. 14 phase). I was able to hit a very solid 4.5 GHz on all cores – but nothing I attempted allowed me to get past this – almost as if it was multiplier locked at 45. Certainly the LIGHTSABER is going to be the better option for serious overclocking, though 4.5 GHz seems understanable for a board with a lighter power delivery like this.

Storage was another area I was able to test with a high-end part, as I have a Samsung SM961 NVMe drive to benchmark. This drive requires a 3rd-gen PCIe x4 M.2 slot to reach its potential, and both of these ECS motherboards offer such support. Here are the results of a quick ATTO run with the SM961 on both boards: 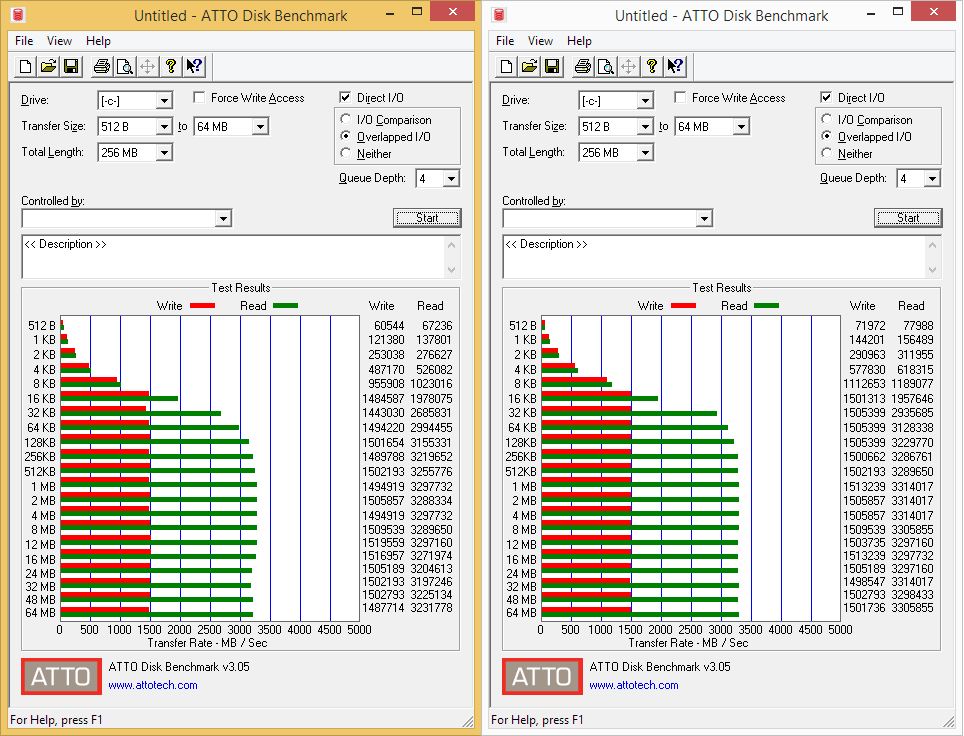 Slightly higher numbers from the mini-ITX board in this test, but in both cases the 3200 MB/s reads and 1500 MB/s writes that my 256 MB Samsung SM961 drive can produce were achieved. On the subject of the M.2 storage slot I'll add that Intel Optane is supported on both of these motherboards as well, though I did not test this function. 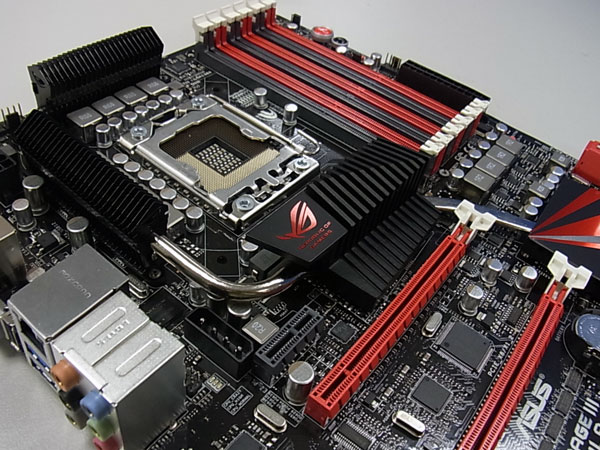