We take some time to test out NVIDIA WhisperMode on a pair of Max-Q enabled notebooks.

One of the more significant downsides to modern gaming notebooks is noise. These devices normally have small fans that have to spin quickly to cool the high-performance components found inside. While the answer for loud gaming desktops might be a nice set of headphones, for notebooks that may be used in more public spaces, that's not necessarily a good solution for friends or loved ones.

Attempting to address the problem of loud gaming notebooks, NVIDIA released a technology called WhisperMode. WhisperMode launched alongside NVIDIA's Max-Q design notebooks earlier this year, but it will work with any notebook enabled with an NVIDIA GTX 1060 or higher. This software solution aims to limit noise and power consumption of notebooks by restricting the frame rate of your game to a reasonable compromise of performance, noise, and power levels. NVIDIA has profiled over 400 games to find this sweet spot and added profiles for those games to WhisperMode technology.

WhisperMode is enabled through the NVIDIA GeForce Experience application. 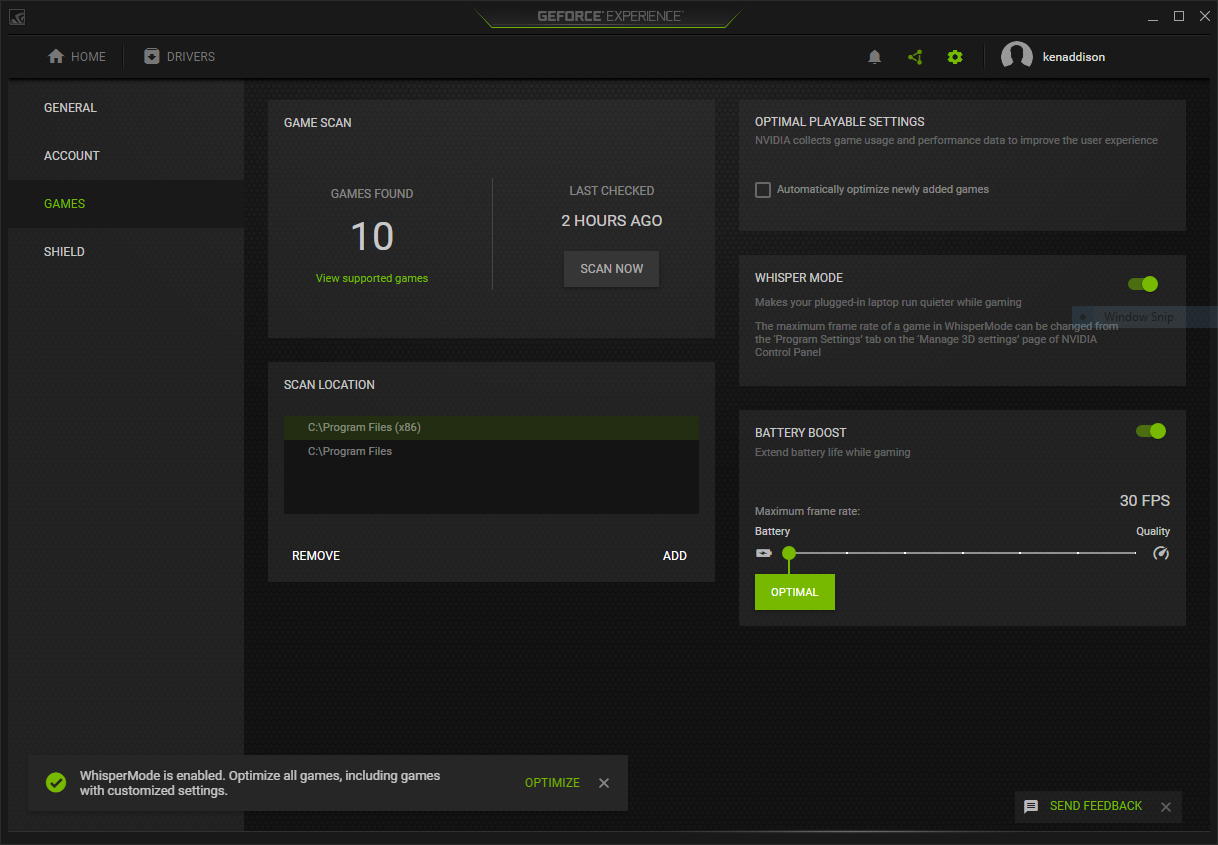 From GFE, you can also choose to "Optimize games for WhisperMode." This will automatically adjust settings (in-game) to complement the frame rate target control of WhisperMode. 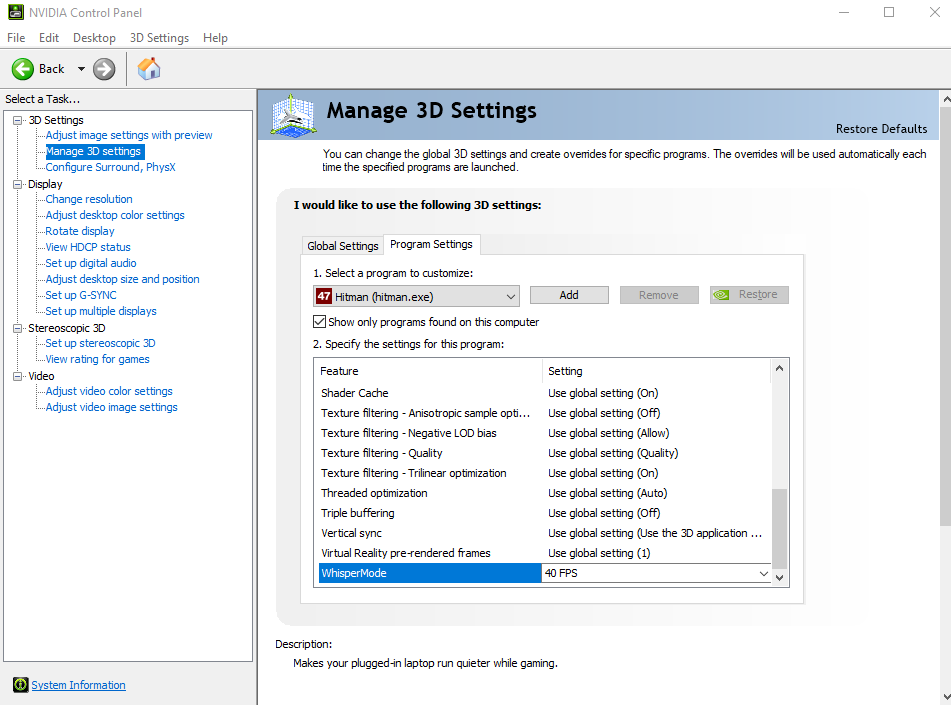 If you want to adjust the Frame Rate Target, that must be done in the traditional NVIDIA Control Panel and is done on a per app basis. The target can be set at intervals of 5 FPS from 30 to the maximum refresh of your display. Having to go between two pieces of software to tweak these settings seems overly complex and hopefully some upcoming revamp of the NVIDIA software stack might address this user interface falacy.

To put WhisperMode through its paces, we tried it on two notebooks – one with a GTX 1070 Max-Q (the MSI GS63VR) and one with a GTX 1080 Max-Q (the ASUS ROG Zephyrus). Our testing consisted of two games, Metro: Last Light and Hitman. Both of these games were run for 15 minutes to get the system up to temperature and achieve sound measurements that are more realistic to extended gameplay sessions. Sound levels were measured with our Extech 407739 Sound Level Meter placed at a distance of 6 inches from the given notebooks, above the keyboard and offset to the right.

First, we wanted to verify that WhisperMode was actually limiting the frame rate to 40 FPS as configured. A quick capture of frame times with WhisperMode off and on using our Frame Rating capture system revealed it to be working as intended. 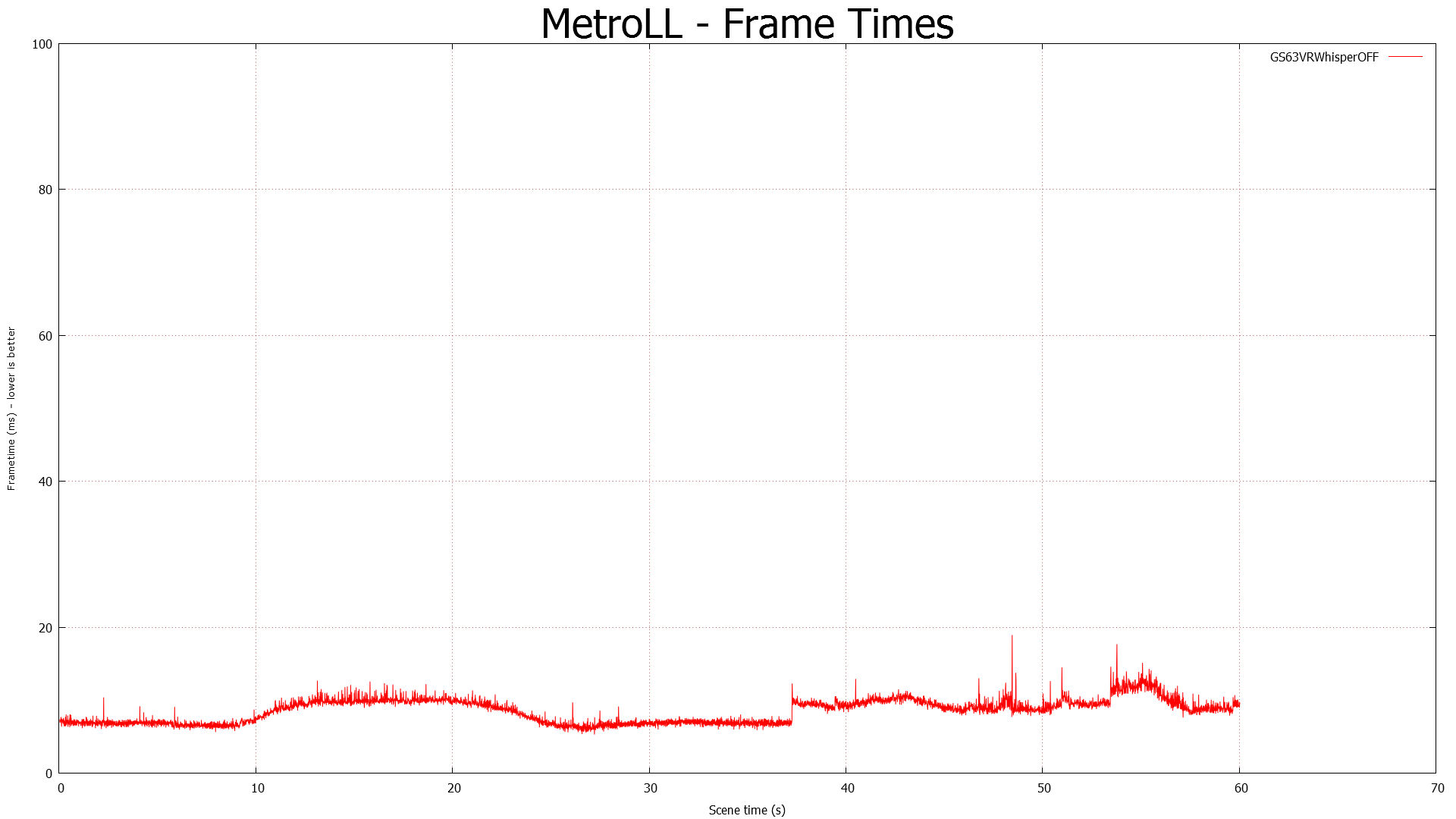 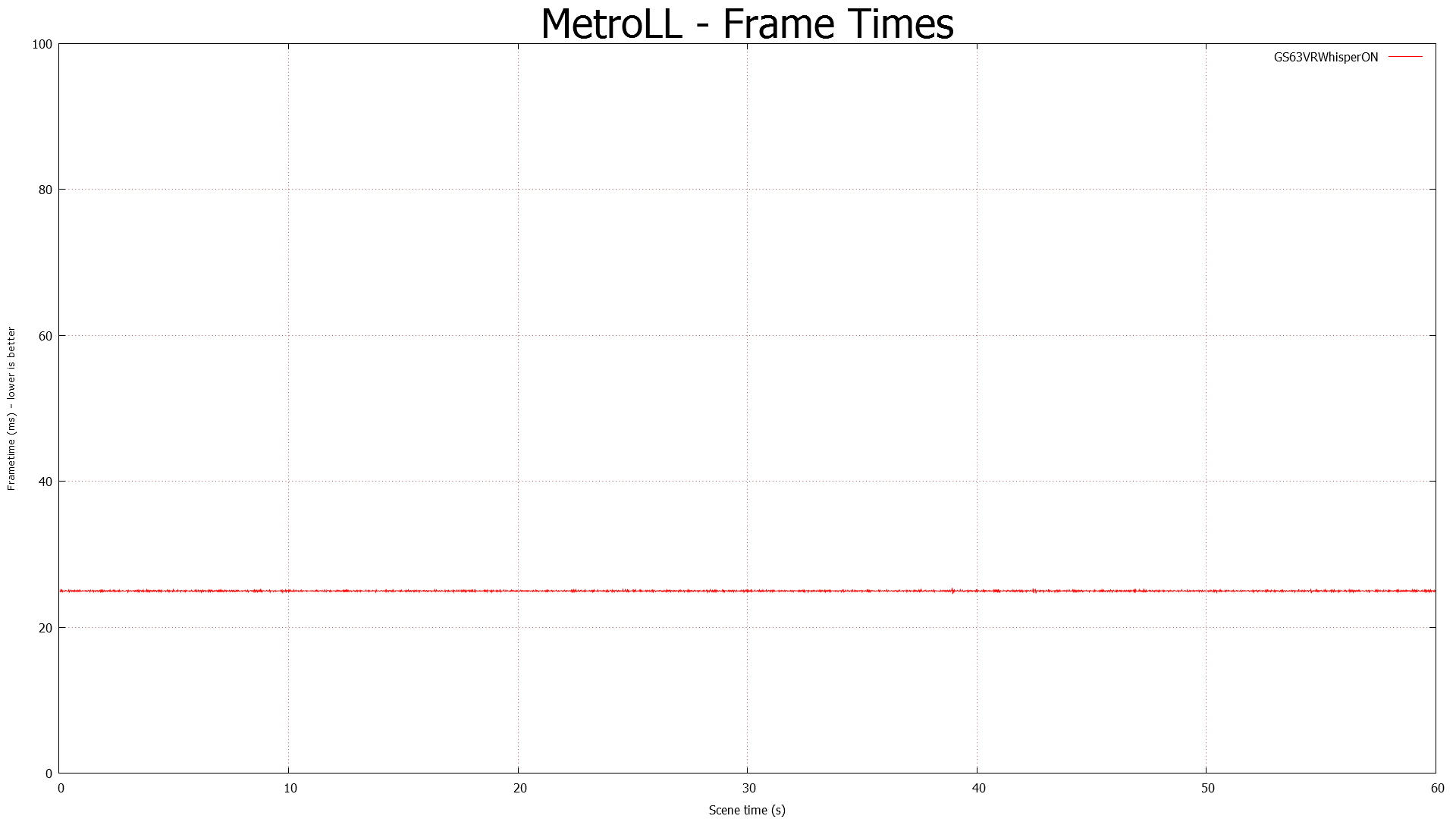 Both titles were running at over 100 FPS unconstrained, but when WhisperMode was enabled it provides a consistent 40 FPS while gaming. 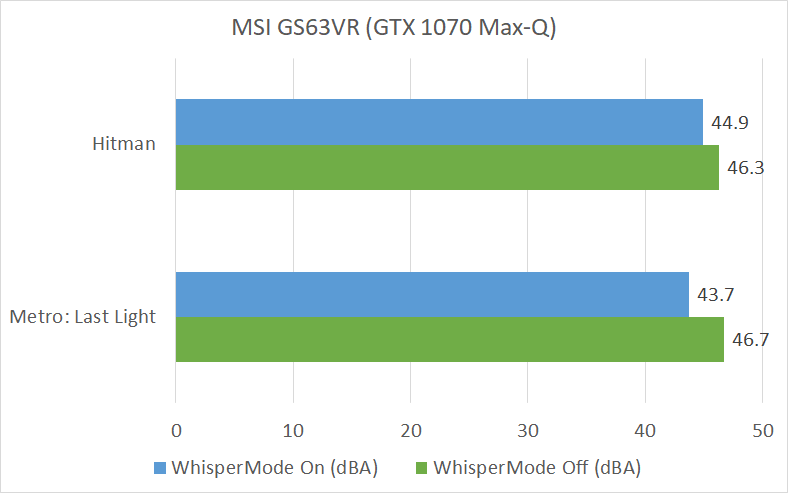 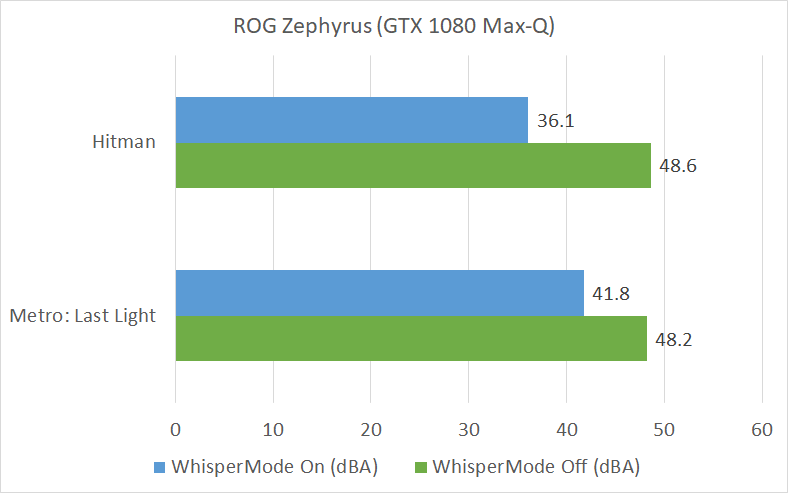 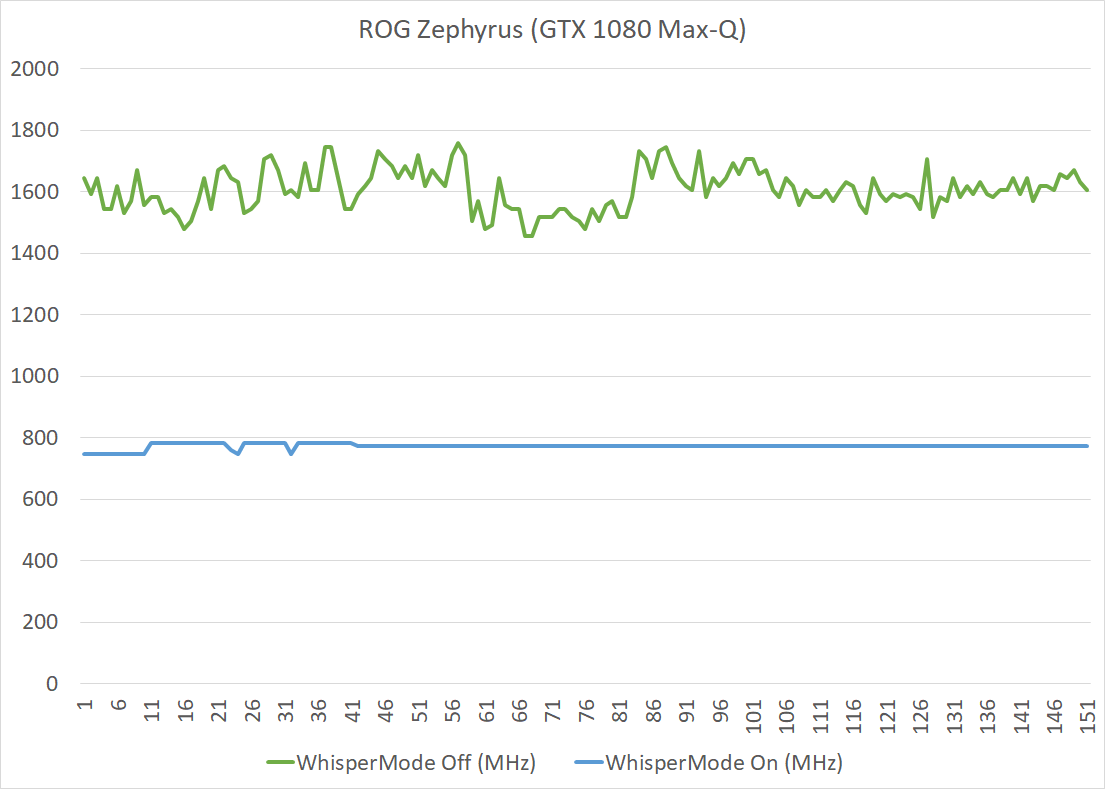 Taking a closer look at the Metro: Last Light on the ROG Zephyrus, we see one of the reasons for such a significant reduction in noise. Charting the GPU clock speeds in WhisperMode off versus WhisperMode on, we see a 50%+ reduction in clock speeds by enabling WhisperMode. This means the GPU will run cooler, and hence the fans will have to work less to keep the silicon within the appropriate temperature range. 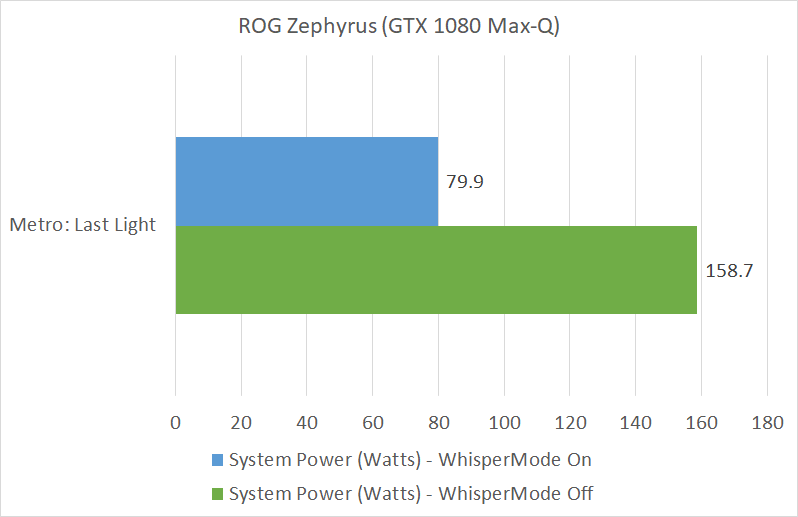 As you might expect, with such a drastic clock speed difference comes a significant reduction in overall system power consumption. With the ROG Zephyrus in Metro: Last Light, we see a 44% drop in energy usage. Since WhisperMode only works when the notebook is plugged in, this doesn't matter as much, but NVIDIA has the similar BatteryBoost technology to help lower power consumption when gaming on the battery. 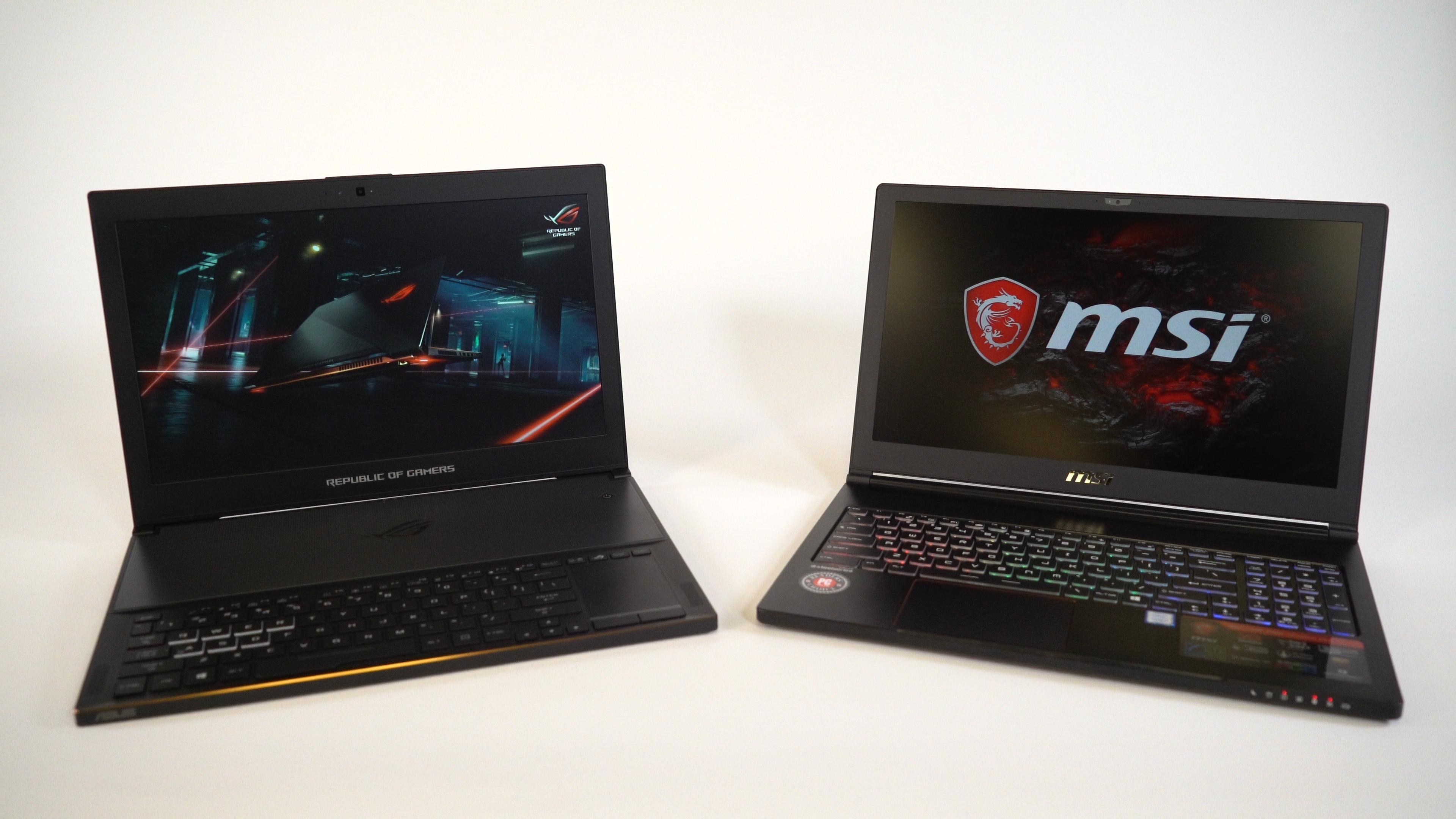 So where does this leave us with NVIDIA's WhisperMode technology? Overall, I've come out of this testing impressed. The ROG Zephyrus saw experience-changing drops in noise by limiting the frame rate. However, as we saw with the MSI GS63VR, it will depend on the particular notebook you are using and even the specific games that determine whether or not you will see significant differences with the technology enabled.

There is a valid argument that gamers investing in GTX 1060, GTX 1070 or GTX 1080 notebooks are not the audience that would be willing to sacrifice frame rates and responsiveness in the name of noise levels. A drop to 40 FPS on a display that doesn't support G-Sync could present a noticeable amount of judder or stutter in the animation, though we didn't notice this during our gaming on either notebook for this review. There is flexibility in the feature to customize your own target frame rate, but simply raising that to 60 FPS will negate much of the benefit it aims to provide. Perhaps the best argument for WhisperMode is that you can quickly and easily enable or disable it inside GFE depending on the situation you find yourself gaming in.

I wouldn't purchase a notebook specifically because it supported WhisperMode, but the technology marks another arrow in the quiver that continues to prove NVIDIA makes the best mobile gaming GPUs without debate.