A new CPU means new overclocking challenges and with it comes a new batch of refreshed Z370 motherboards. At the high end, the current frequency record for the Core i7 8700K is 7,405.1 MHz obtained by Hovan Yang using a MSI Z370 Godlike Gaming motherboard.

He’s not the only one testing the limits of Intel’s new six core processors though. Asus held an overclocking event a few weeks ago where renowned overclockers Alex@ro, elmor, der8auer, Rsannino, and shamino battled it out. Der8auer got a pre-release crack at the i7 8700K at the event and after de-lidding and replacing the TIM with liberal amounts of Kryonaut thermal paste managed to achieve 6.8 GHz using 1.8 volts and a 68x multiplier (and bumping the cache speed up to 6.3 GHz). With these settings on the monster Maximus X Apex motherboard, he scored 299 in single threaded and 2253 in multithreaded in Cinebench R15. Der8auer compared this benchmark result to Skylake X at 5.5 GHz scoring 237 in the single threaded test. Following the benchmark run, he went for the highest CPU-z validated clockspeed he could hit and managed to push the chip to 7300 MHz (100MHzx73). From there overclocker Alex from Romania was able to overclock his i7 8700K to 6844 MHz and scored 2306 in Cinebench R15. 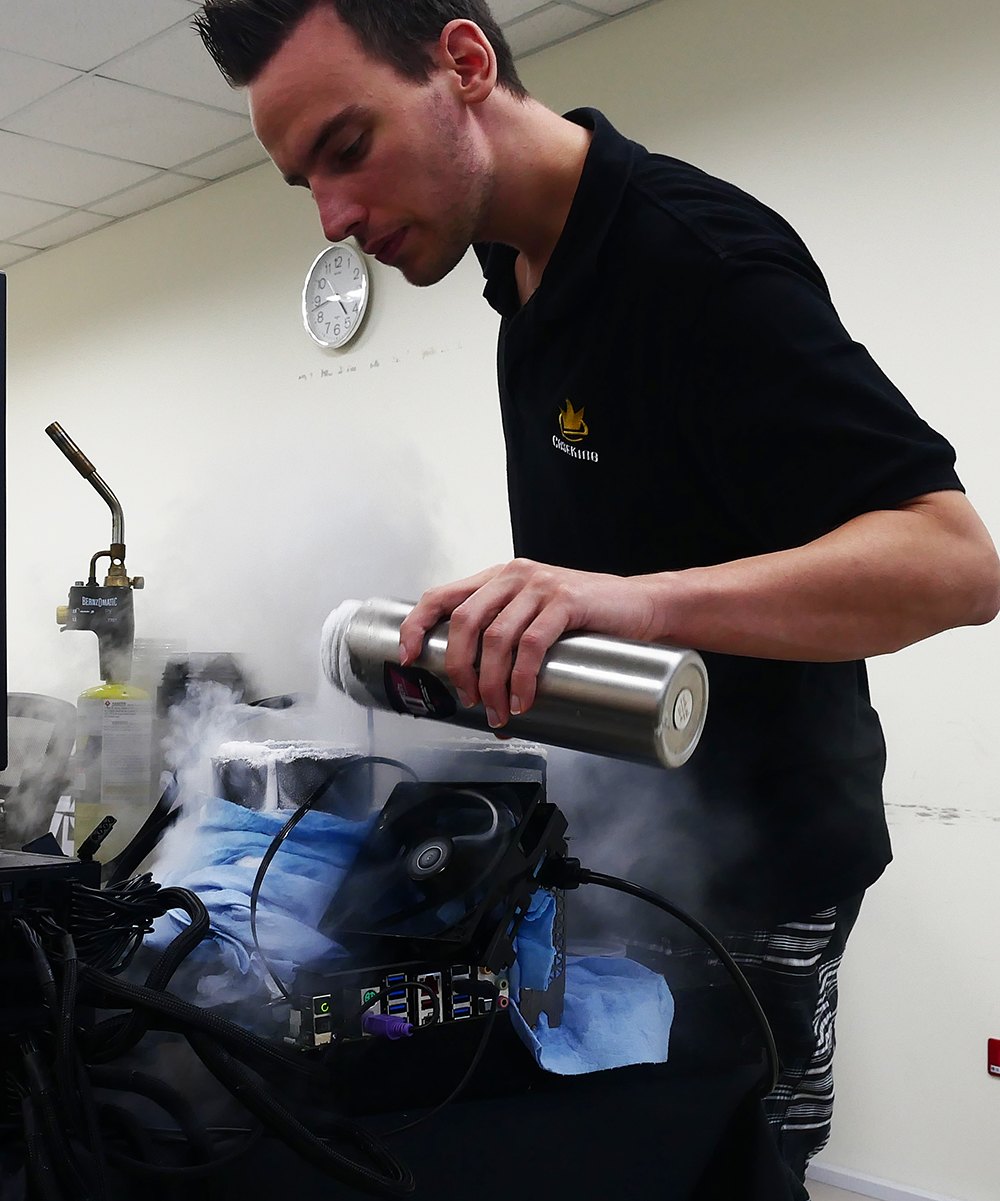 The overclockers broke 10 new records in the six core CPU category and also managed to break a DDR4 clockspeed record by pushing a single 8GB G.Skill DIMM to 5529.2 MHz at 24-31-31-63-3 timings!

Also of note is that Coffee Lake does not depend of FIVR so overclockers are able to use a full pot of liquid nitrogen (or liquid helium) to cool the processor down to much lower temperatures so that they can crank up the voltage and achieve much higher clockspeeds than Skylake-X which cannot boot if temperatures are too low.

While the ASUS team does not hold the clockspeed record anymore (though they might regain it with some Liquid Helium), der8auer has an interesting video and Asus has a blog post with photos talking about the process, setup, and everything that goes into these extreme overclocking sessions including pre-binning the chips, preparing the IHS and motherboard for the super cold (-185°C to -190°C) temperatures, and keeping the processors and motherboards running. For example, and Josh will be interested in this, part of the process of preparing the motherboard involves slathering it in Vaseline!

If you are interested in this extreme overclocking stuff it gives a bit of insight into all the fun to be had!