Alright, so now that we have looked at X299 VROC, let's see how it stacks up against Z270's RST implementation. Note that we did not have a Z270 board on hand which supported triple M.2 RAID via the PCH, but we can saturate DMI with only two fast SSDs and can estimate the triple RAID figures where it is useful to do so.

To make these comparisons a bit easier to digest, the first three charts here will evaluate single SSD performance across these two chipsets: 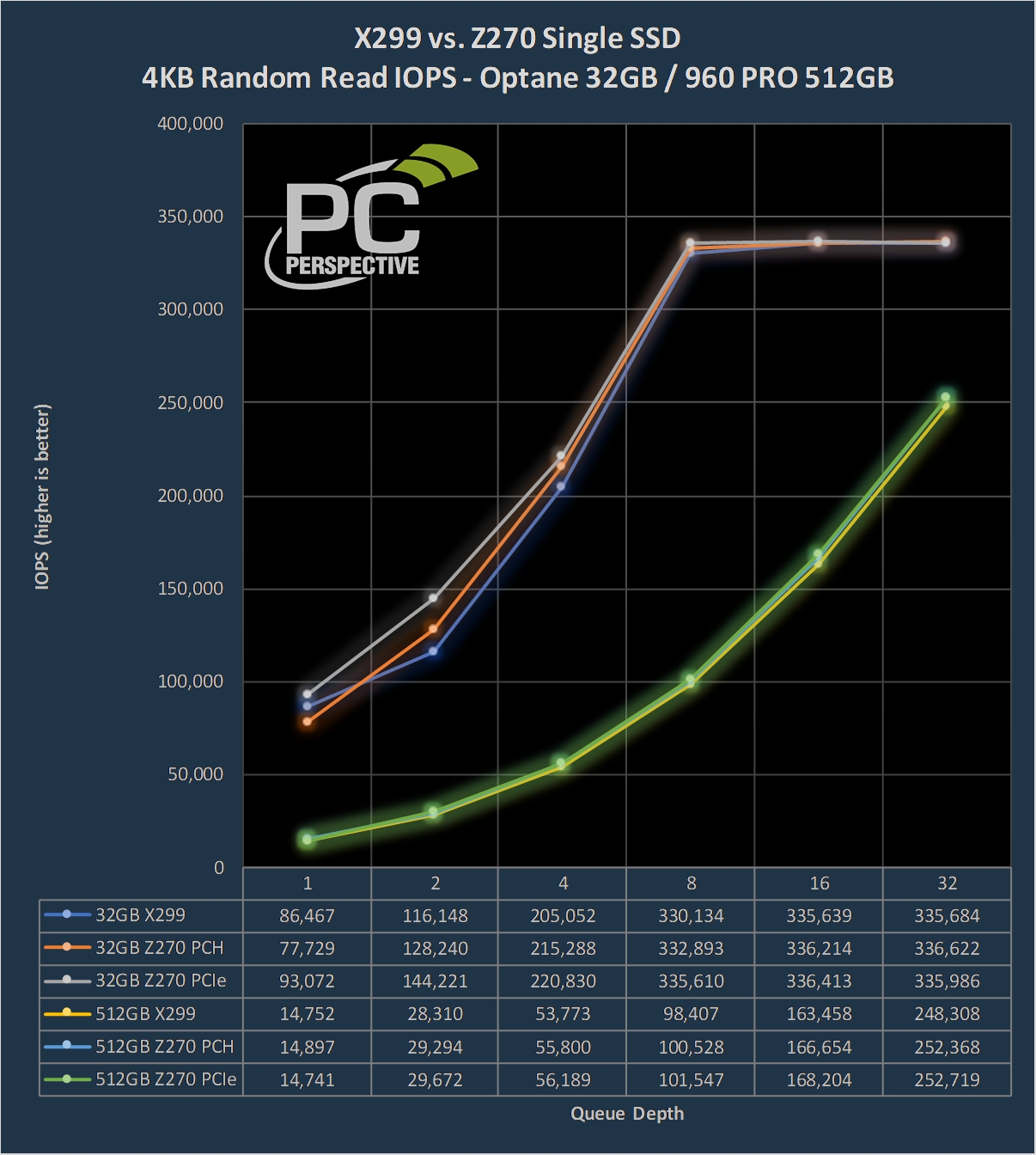 Samsung 960 PRO SSD performance across the X299 and the Z270 (connected via PCH as well as directly to the CPU) are all nearly identical, though the Z270 platform does see a slight edge. The high end of the Optane (32GB) parts all saturate at the same maximum figure, but there is what appears to be a battle going on for low QD performance. X299 and the Z270 PCH trade blows a bit, but the Optane part directly connected to the 7700K CPU blows everything else away, with IOPS starting at over 93k @ QD=1! How can this be so much faster than the brand new X299 platform? Read on to find out. 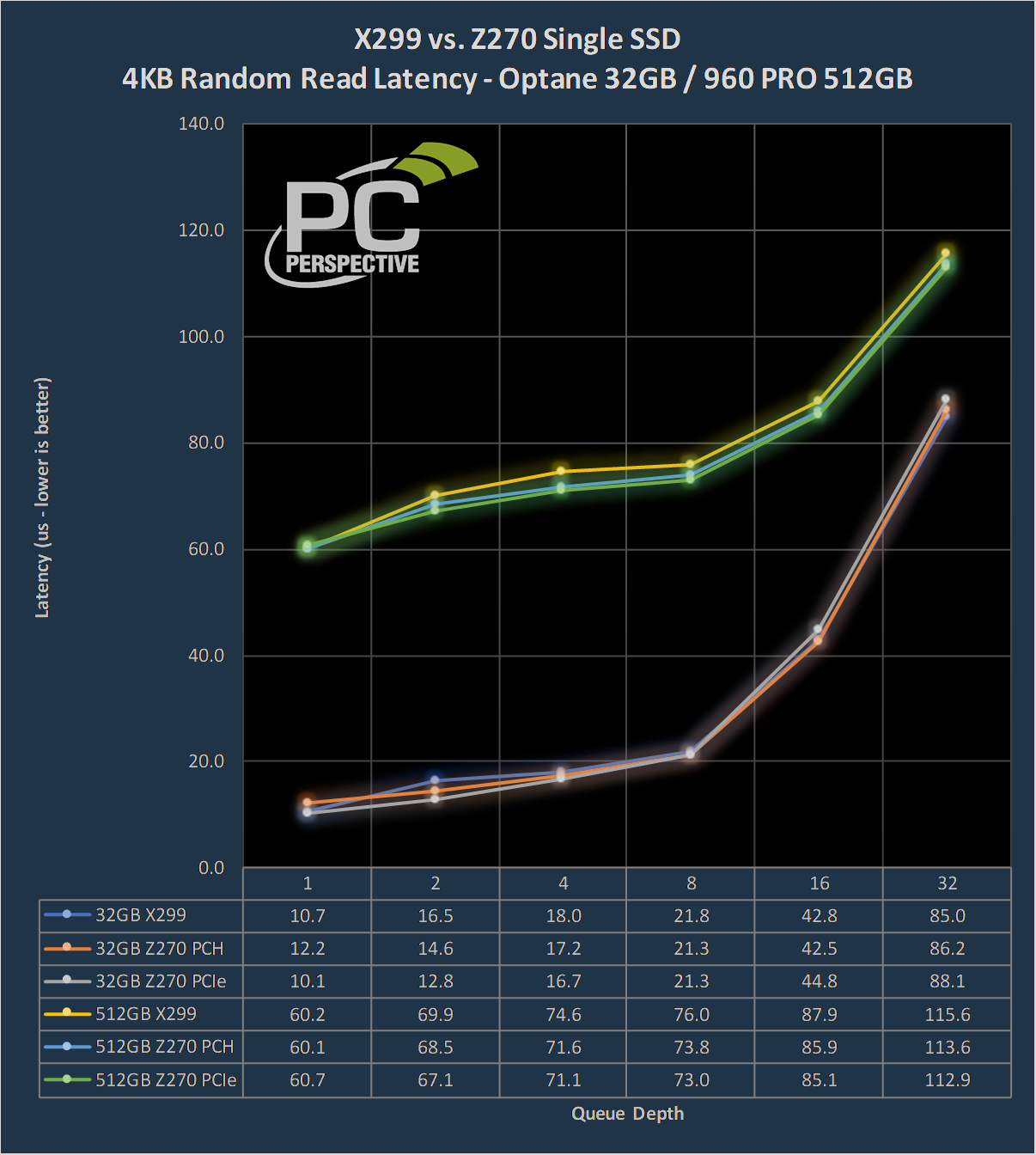 The most important thing here is the first three figures in the QD=1 column. First, we see the 10.7us figure from the X299 testing. That figure jumps to 12.2us on Z270 with an SSD installed into an M.2 socket (M.2 locations will very likely be wired to the PCH so that RST RAID is possible). Installing the SSD into a standard PCIe slot (via an interposer) brings the latency down to 10.1us. This tells us two things: 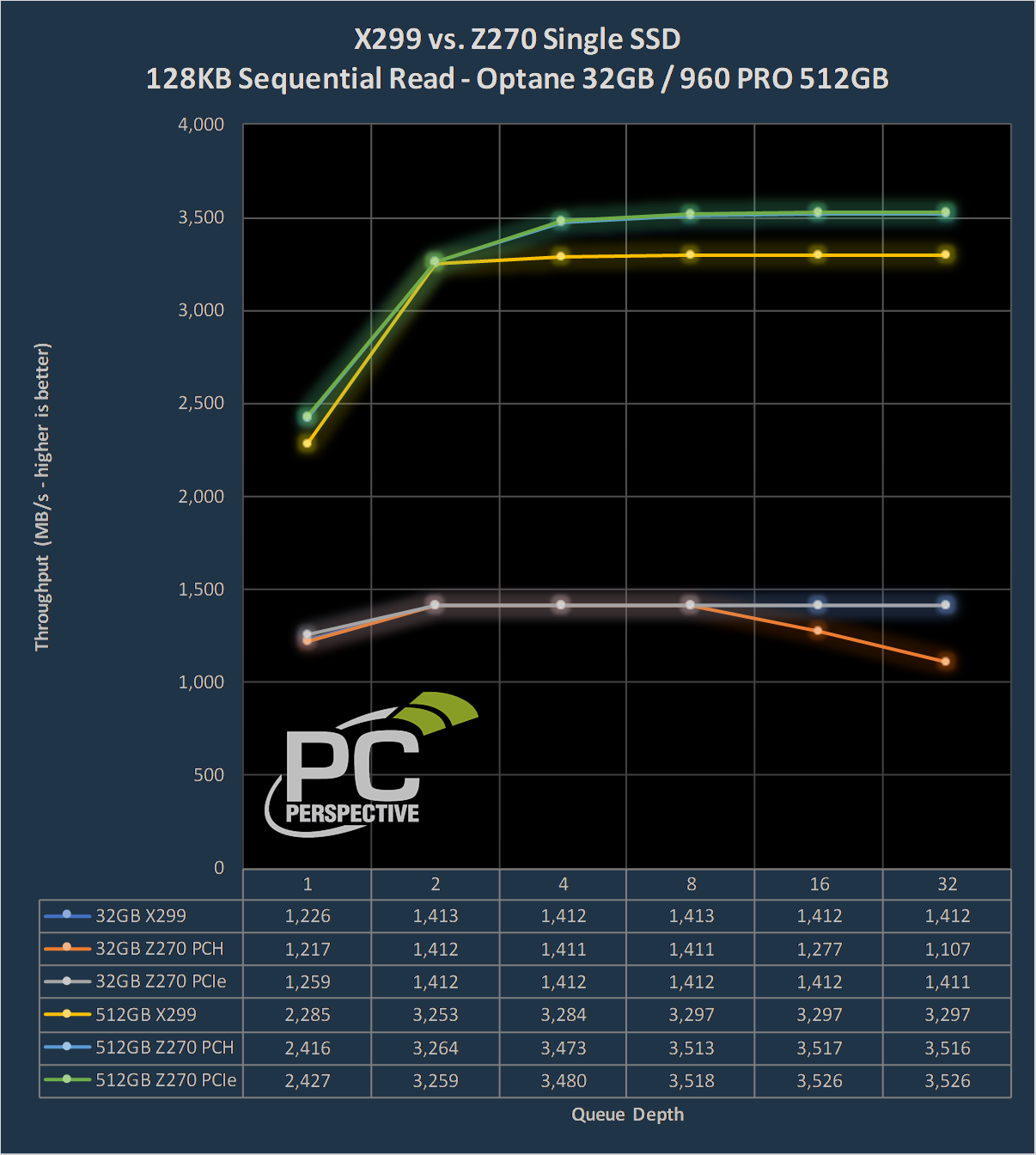 A bit of a spread here with the Z270 showing an odd falloff at higher QD sequentials on Optane (orange), while both the PCH and direct connected Z270 (green + light blue hiding behind it) performed significantly better than the same on the X299 platform (yellow). Typically the Samsung results would be equal across the board, however after these test runs were completed, we discovered the Samsung NVMe driver was inadvertently installed on our Z270 test system, boosting single SSD sequential results. I'll re-run these tests with the standard NVMe driver and update when able.

Now we shift to comparing RAID performance across both platforms. To make the charts reasonably readable, I will stick to QD=1 for random and QD=32 for sequential. 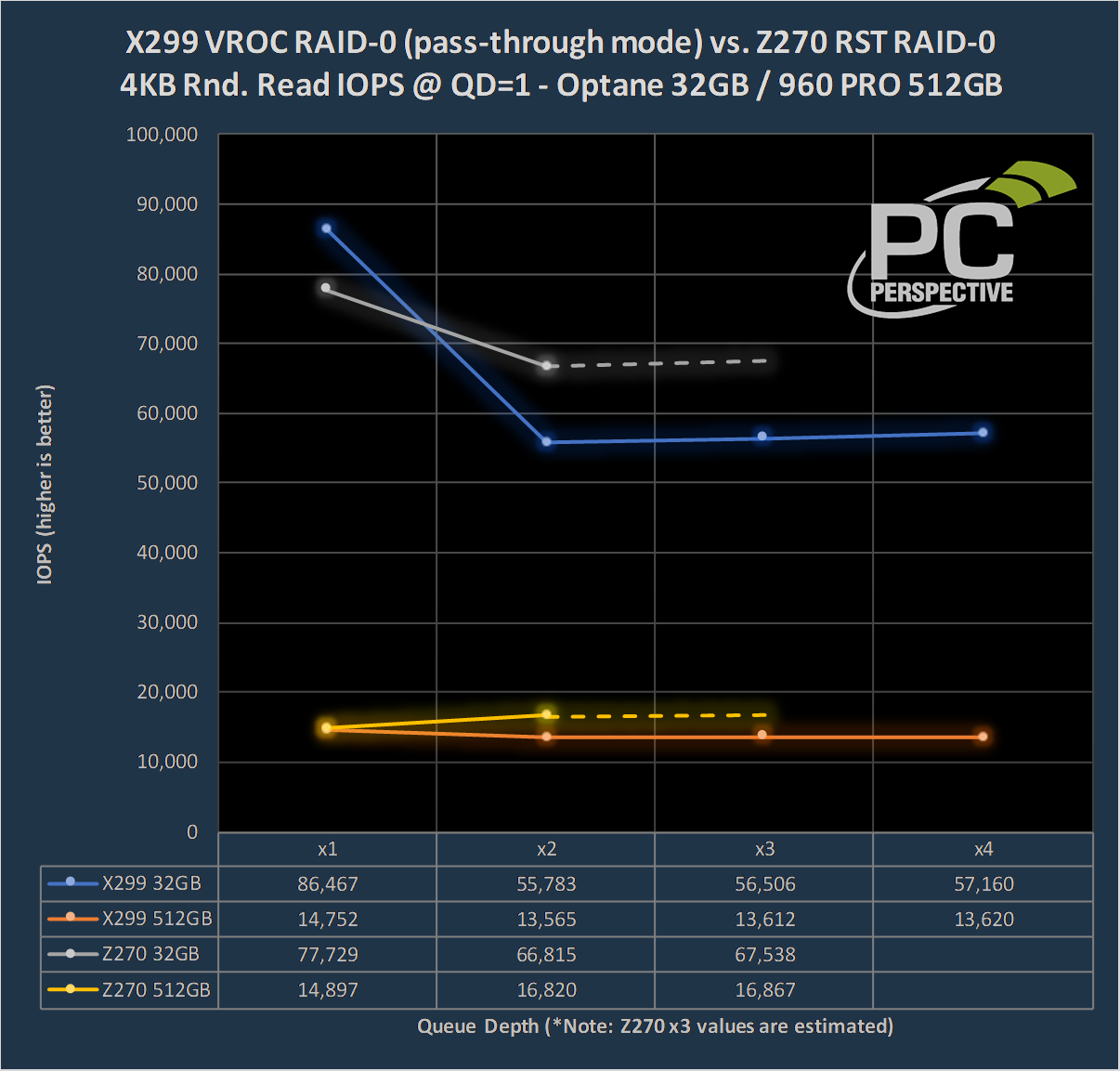 For Optane Memory, X299 (blue) beats Z270 (grey) in single SSD configs, but X299's higher latency penalty in RAID causes it to fall behind. Note that Z270 can beat X299 across the board if single SSD is connected directly to the CPU (93k IOPS). 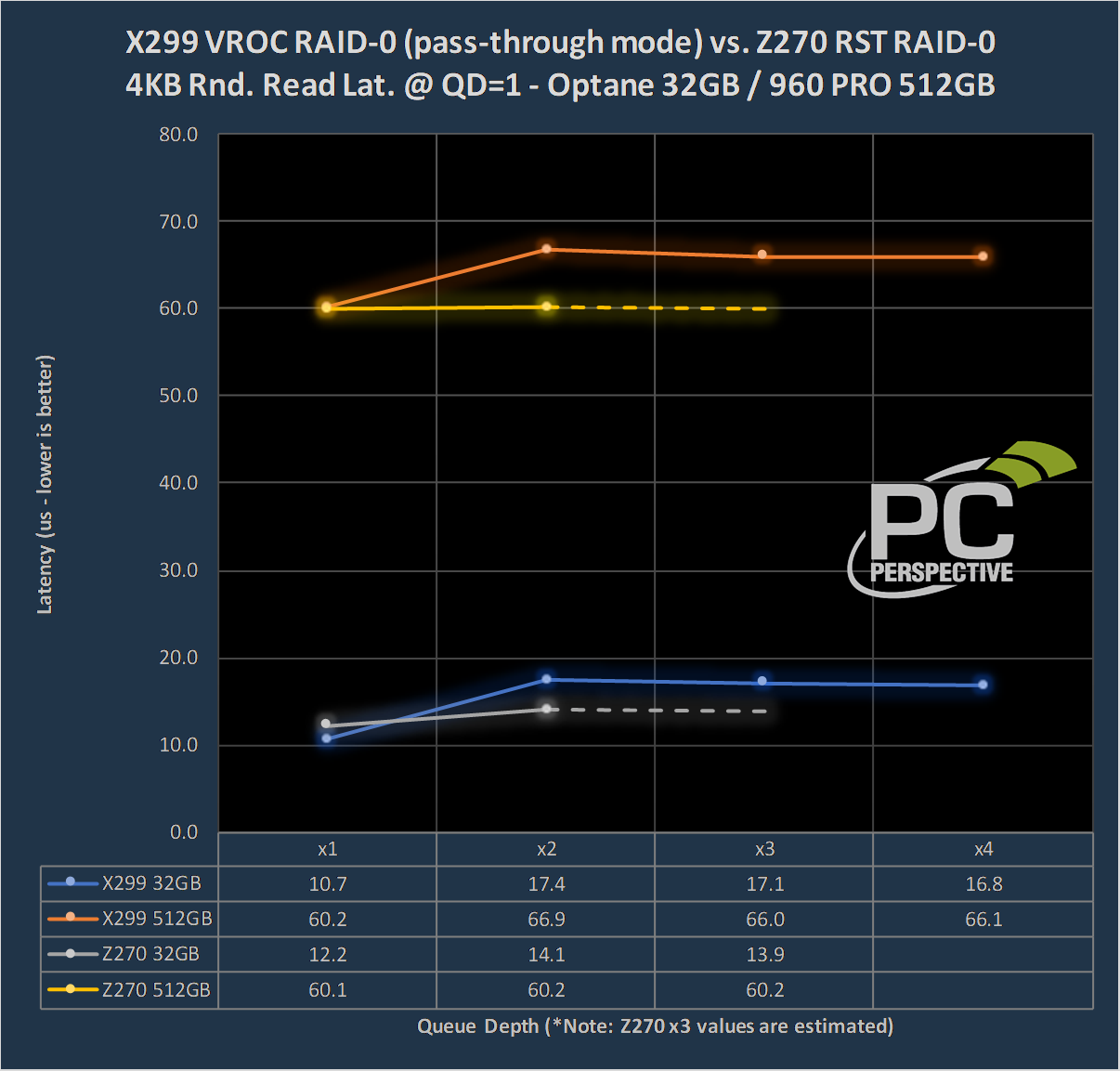 Nothing surprising here as this is effectively an inversion of the IOPS seen above. Z270 single SSD Optane Memory directly connected to the CPU would be 10.1 microseconds, forcing the grey line below the blue across all points. 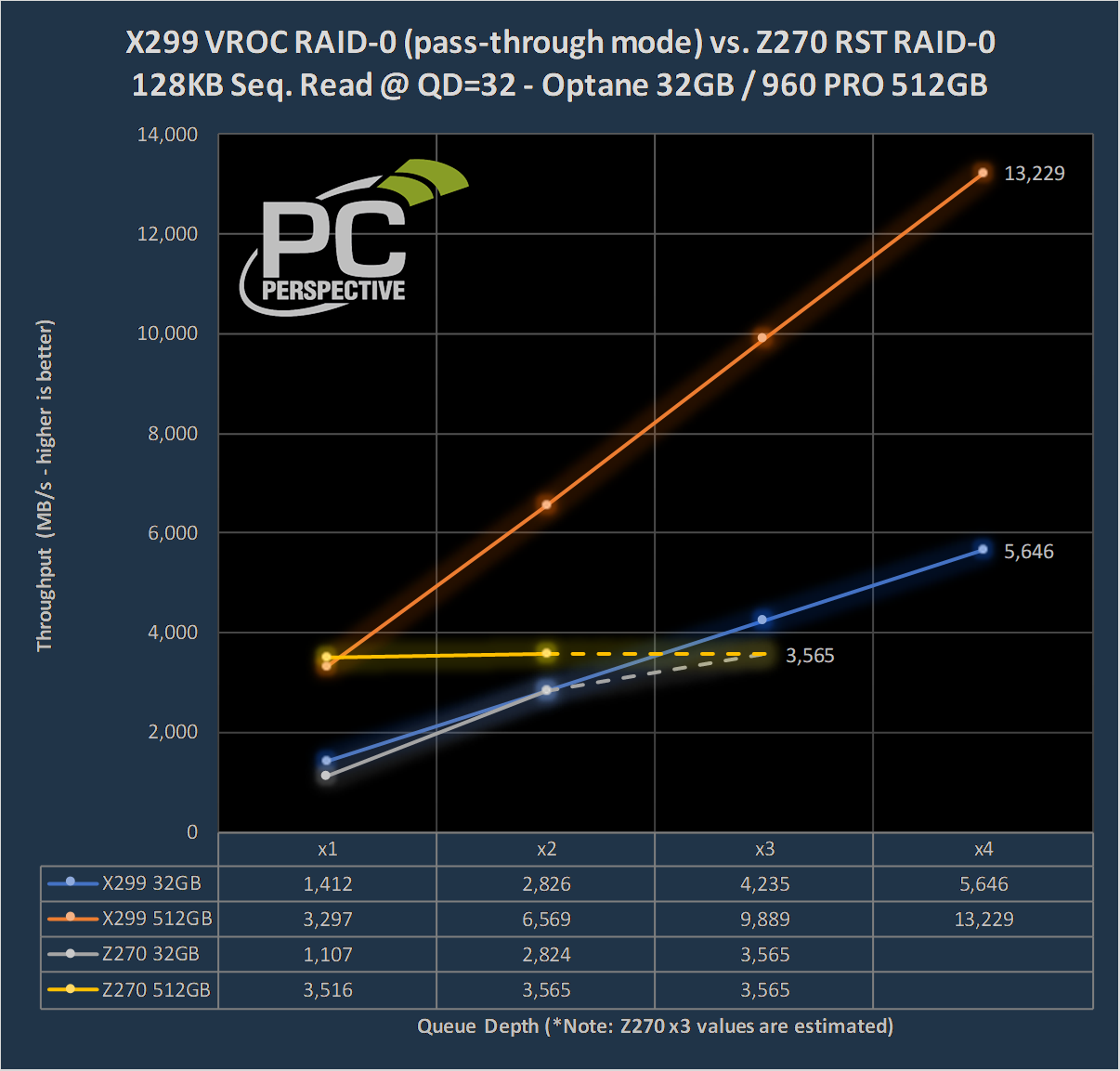 This is the same chart we finished the previous page with, but Z270 data has been added. x3 estimated throughput is simply the x2 saturation throughput seen with the 960 PROs. Removing the DMI bottleneck certainly helps out a lot, as the X299 figures just scream past the Z270, especially when using 960 PRO SSDs!