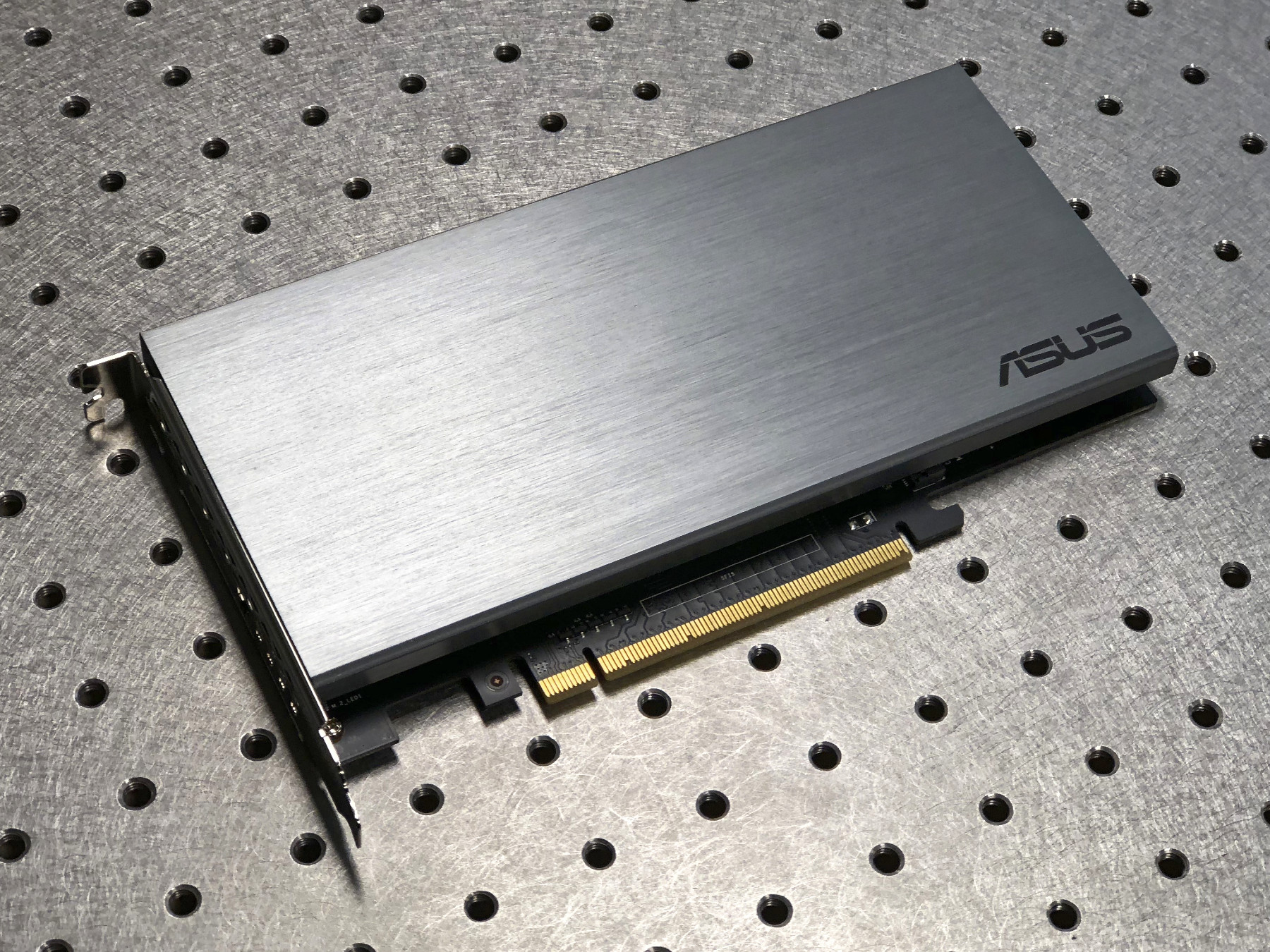 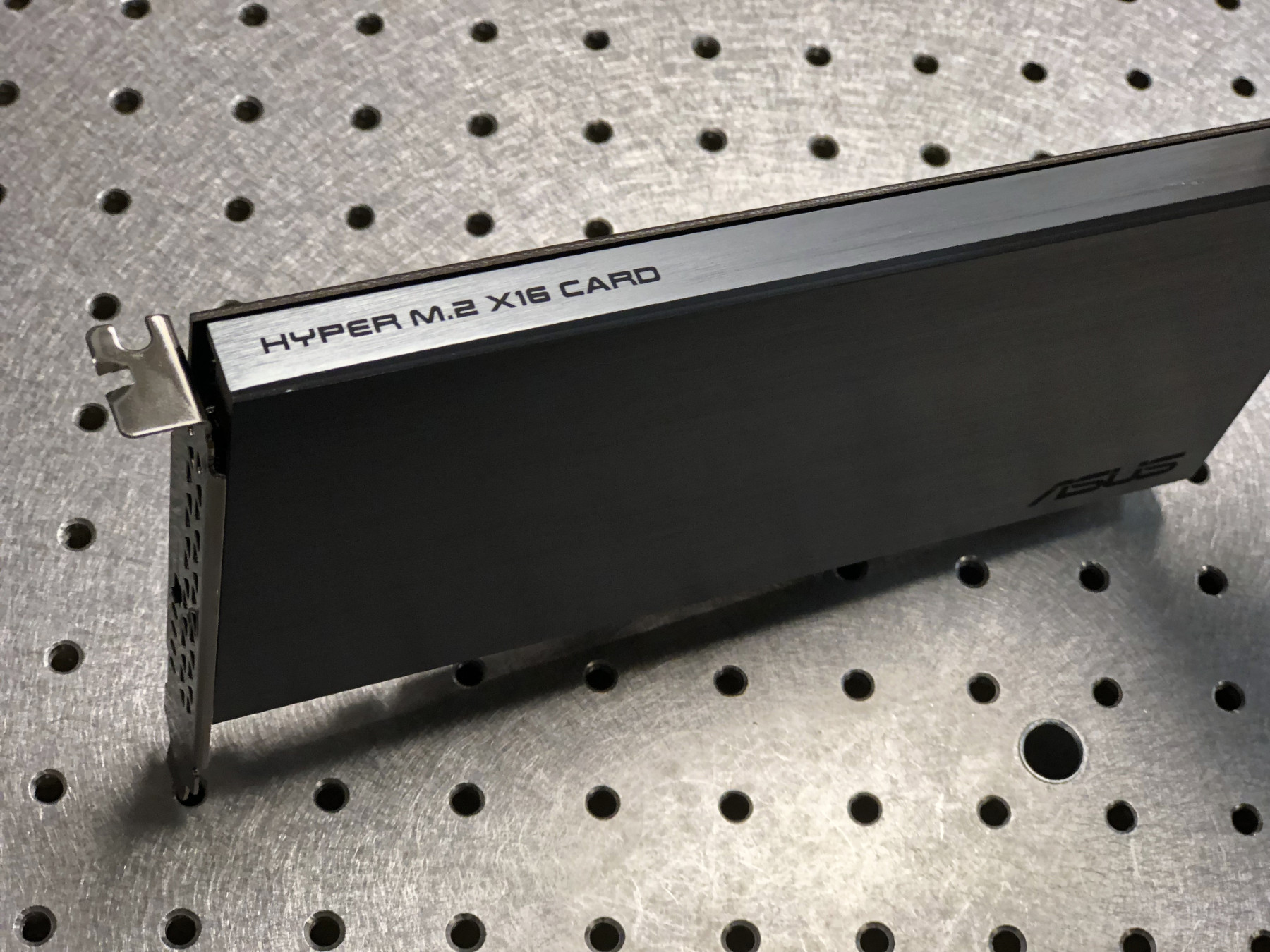 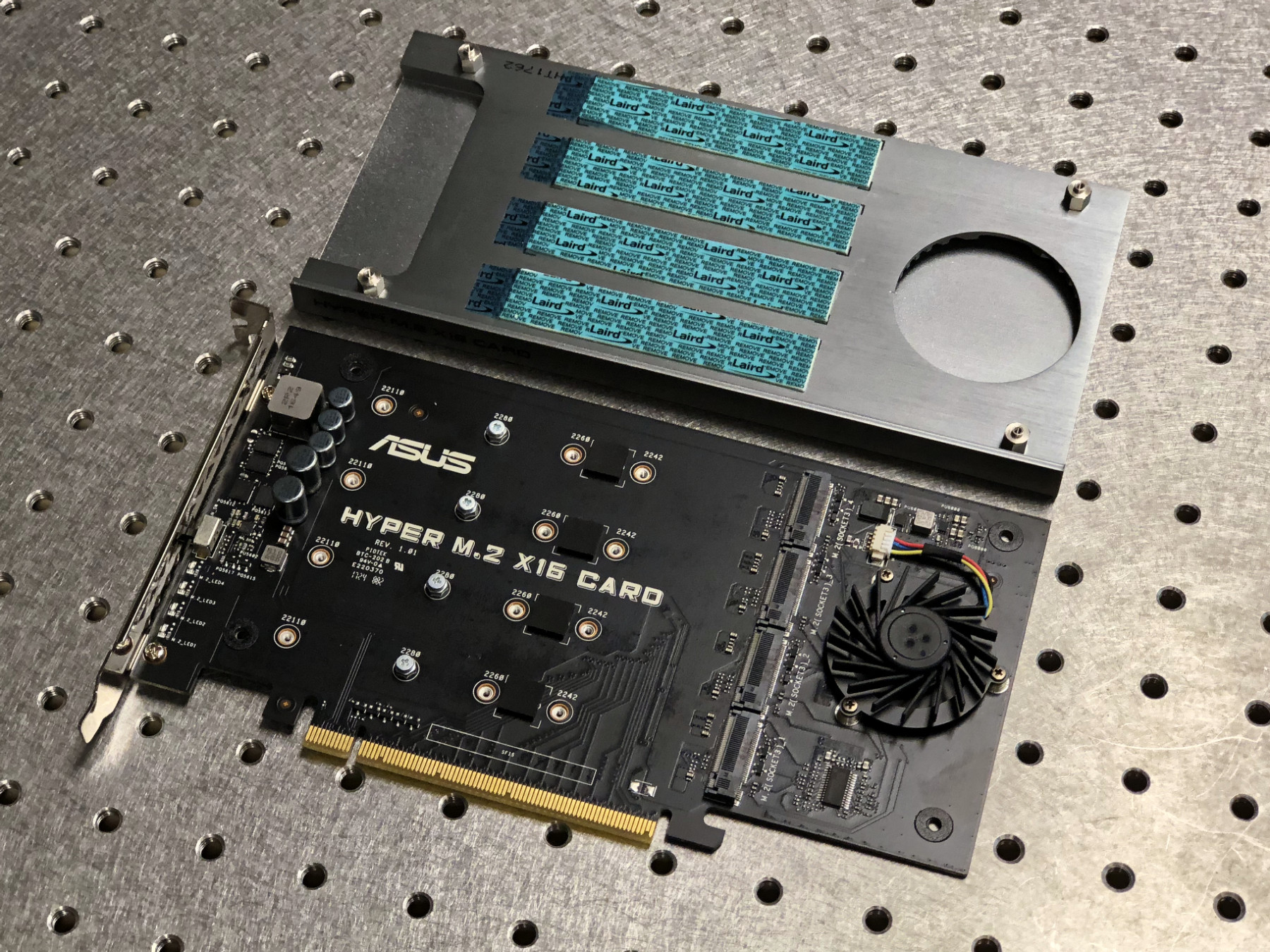 A few screws removed and we're in. 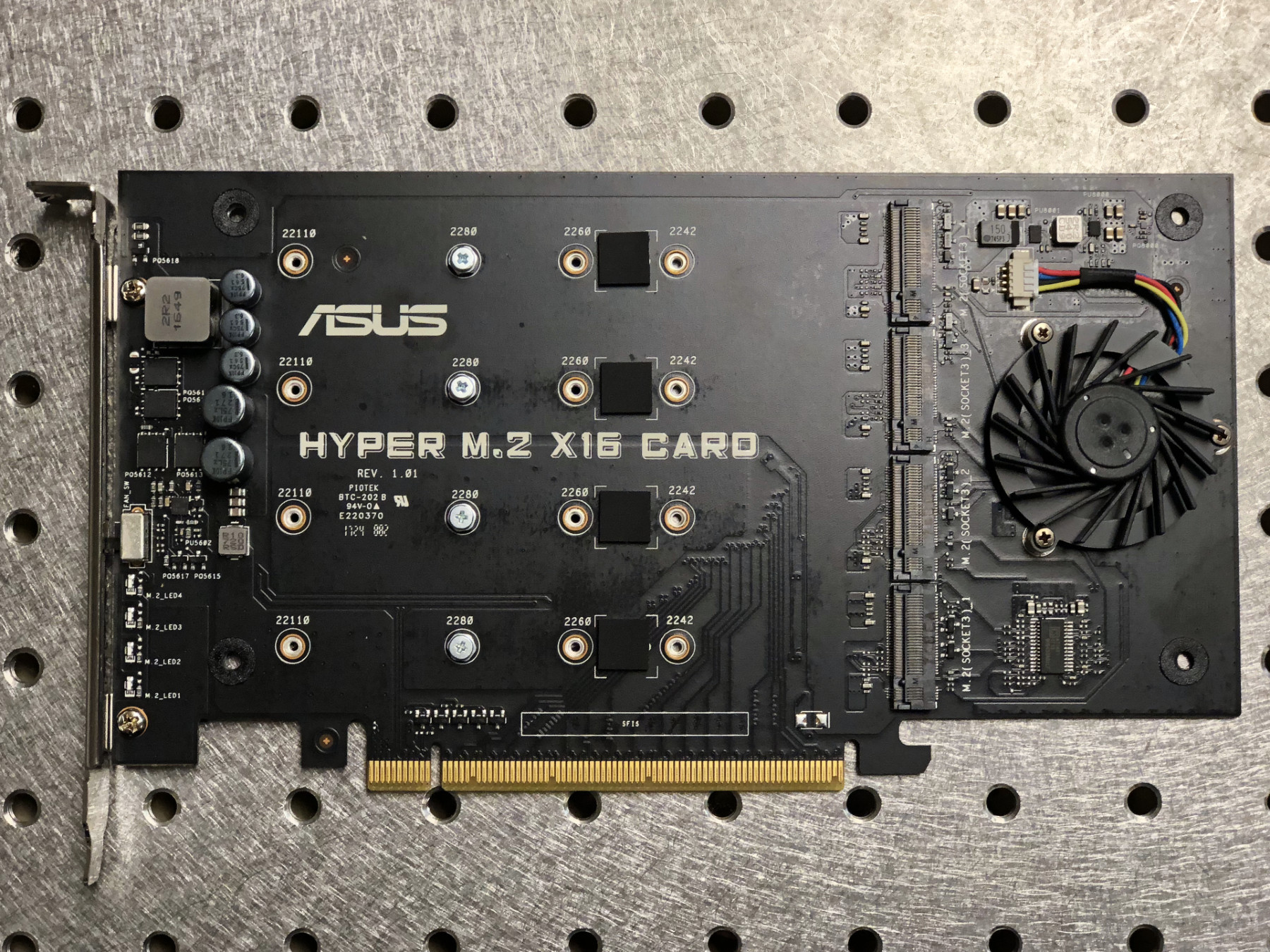 The layout is very simple as no PCIe switch is needed. Each M.2 x4 socket is wired straight to a set of four PCIe lanes at the x16 connector. No fuss, no muss. 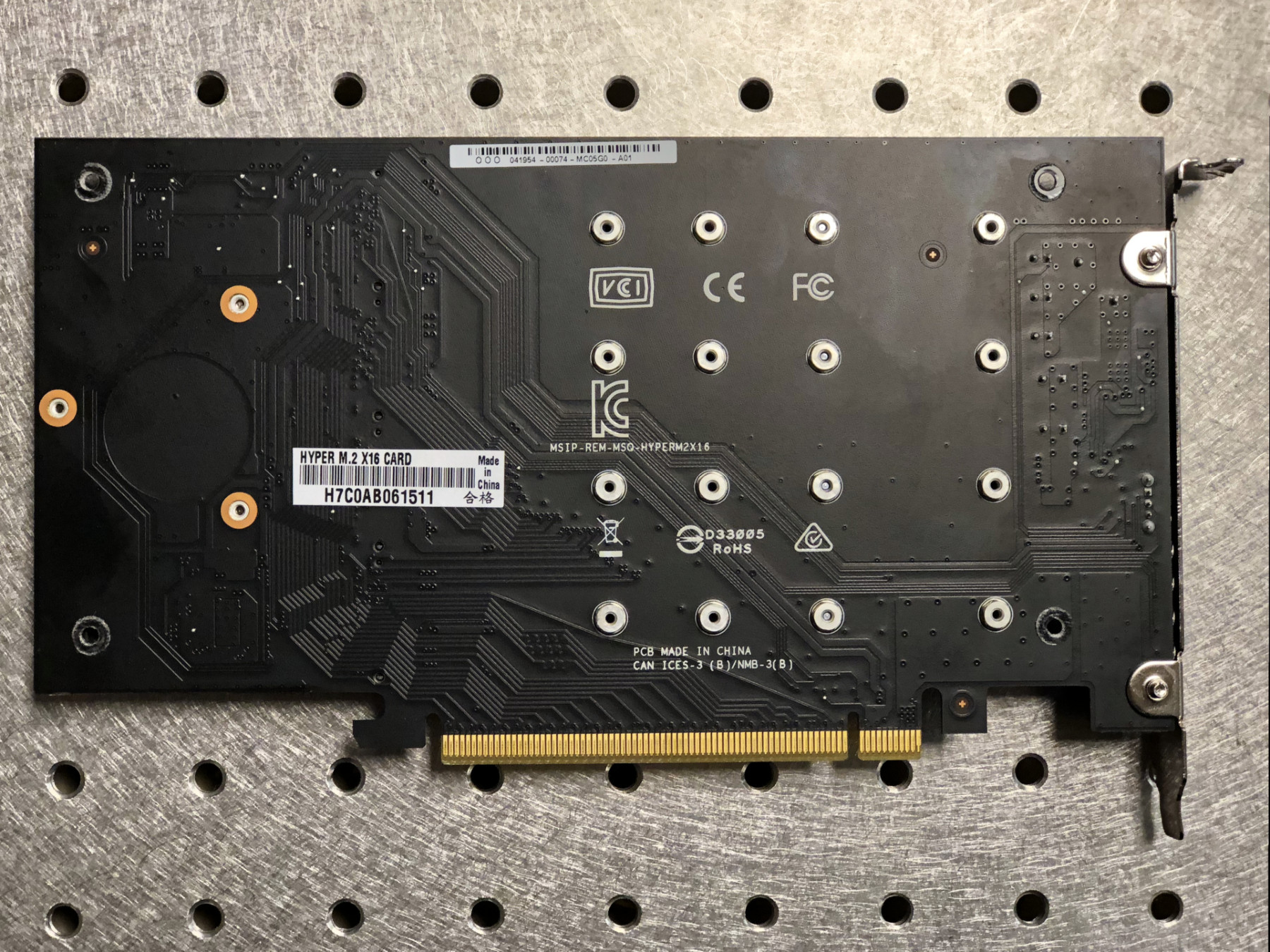 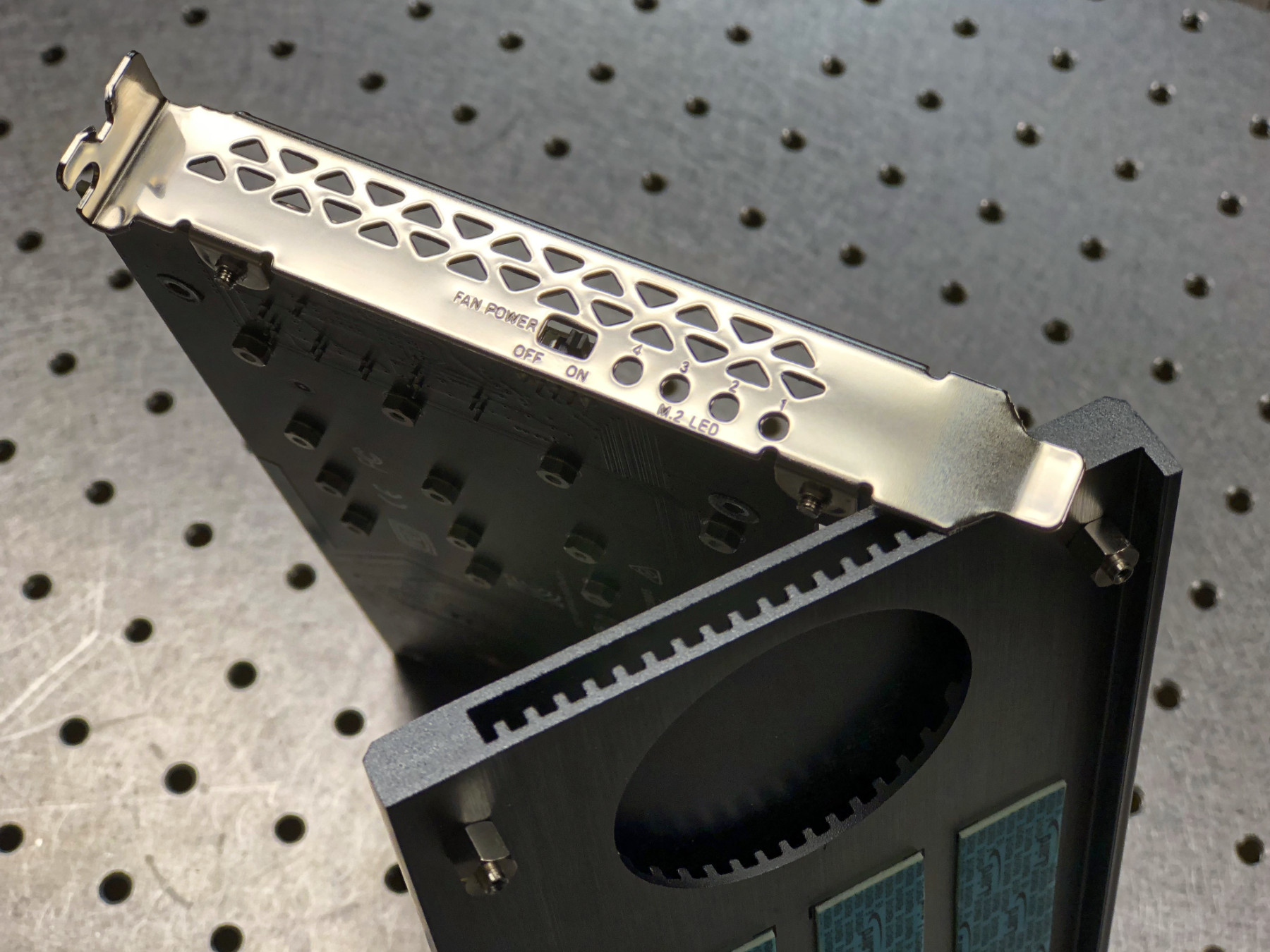 At the backplate, we have power/activity indicators for the four sockets, as well as a switch to turn off the blower fan. With such a large heatsink and the fact that M.2 SSDs rarely draw more than 6W each at full load, most users will probably be fine with the fan switched off.

To wrap up, we've extracted as much useful test data as possible from this early look at VROC, and we can come away with some generalized points:

**Remember, we are testing VROC in a not-officially-released form here. There may be significant optimizations made before it reaches a final state. 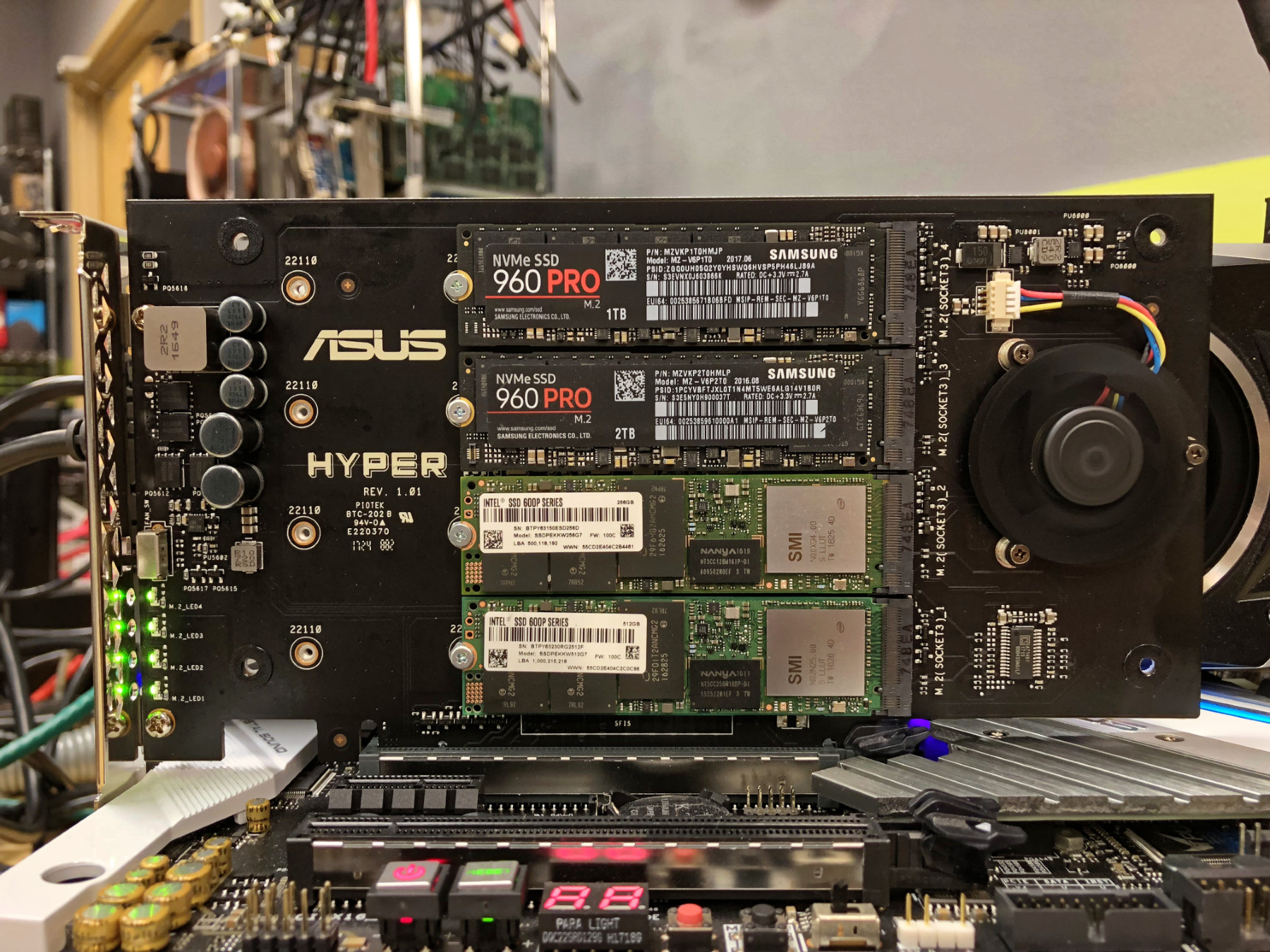 Well, there we have it. Pre-release X299 VROC put through its paces and compared against Z270 RST. As it stands, both solutions have their pros and cons. Z270 wins on IOPS and Latency while X299 looks like it will see sequential transfers scale until you've run out of SSDs to throw at it. Just don't get too carried away if you want to boot from the VROC array, as that is limited to a single VMD (currently 4x NVMe SSDs installed on an ASUS Hyper M.2 X16 Card). We do still have that big elephant in the room – that pesky VROC key that users will have to purchase just to officially enable the features Z270 owners were already getting for free. We won't know if final VROC will enjoy lower latencies, but at present Z270 wins that race – even if it is DMI limited to ~3.6GB/s while a bootable VROC volume can hit 13GB/s (*if* Intel decides to support booting from 960 PROs, that is).

A note to Intel:
If those making the VROC key decisions happen to read this, I believe a more reasonable solution to your segmentation problem would be to enable all RAID modes for a single VMD (four SSDs / a single bootable array using a x16 card). Remember, some of these X299 buyers are just power users who want storage feature parity with Z270. They don't need 20 SSD RAIDs, but they probably expect something like RAID 0/1/5 across four SSDs without having to buy a key to do so. If folks want additional arrays or to span multiple VMDs, *then* make them get a key. This way your X299 platform has slightly better NVMe RAID support than Z270, while not encroaching on your enterprise market share. You've segmented keys this way in the past (4/8 ports on C600), so surely it is doable with VROC. Please don't make someone buy a premium key just to do a 3 or 4 SSD bootable RAID-5 on a single VMD, especially if a hardware RAID card capable of the same could potentially be had for a lower cost than your premium key.

I hate to spoil it for those who spent most of this article drooling over the 13GB/s figures, but for those who feel the 4GB/s DMI limit is worth the latency/responsiveness benefit, this chart likely agrees with you: 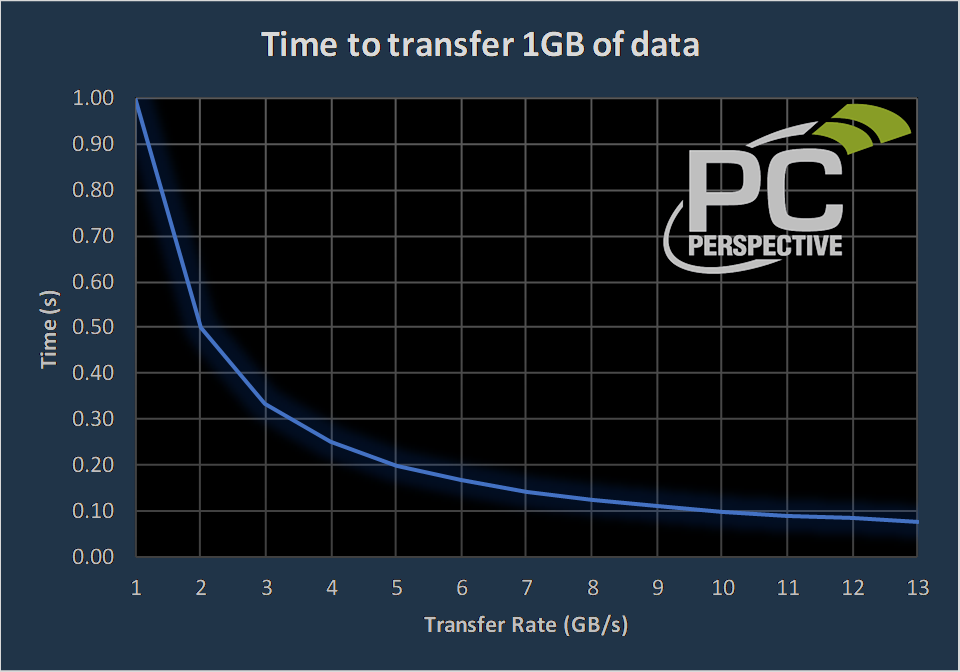 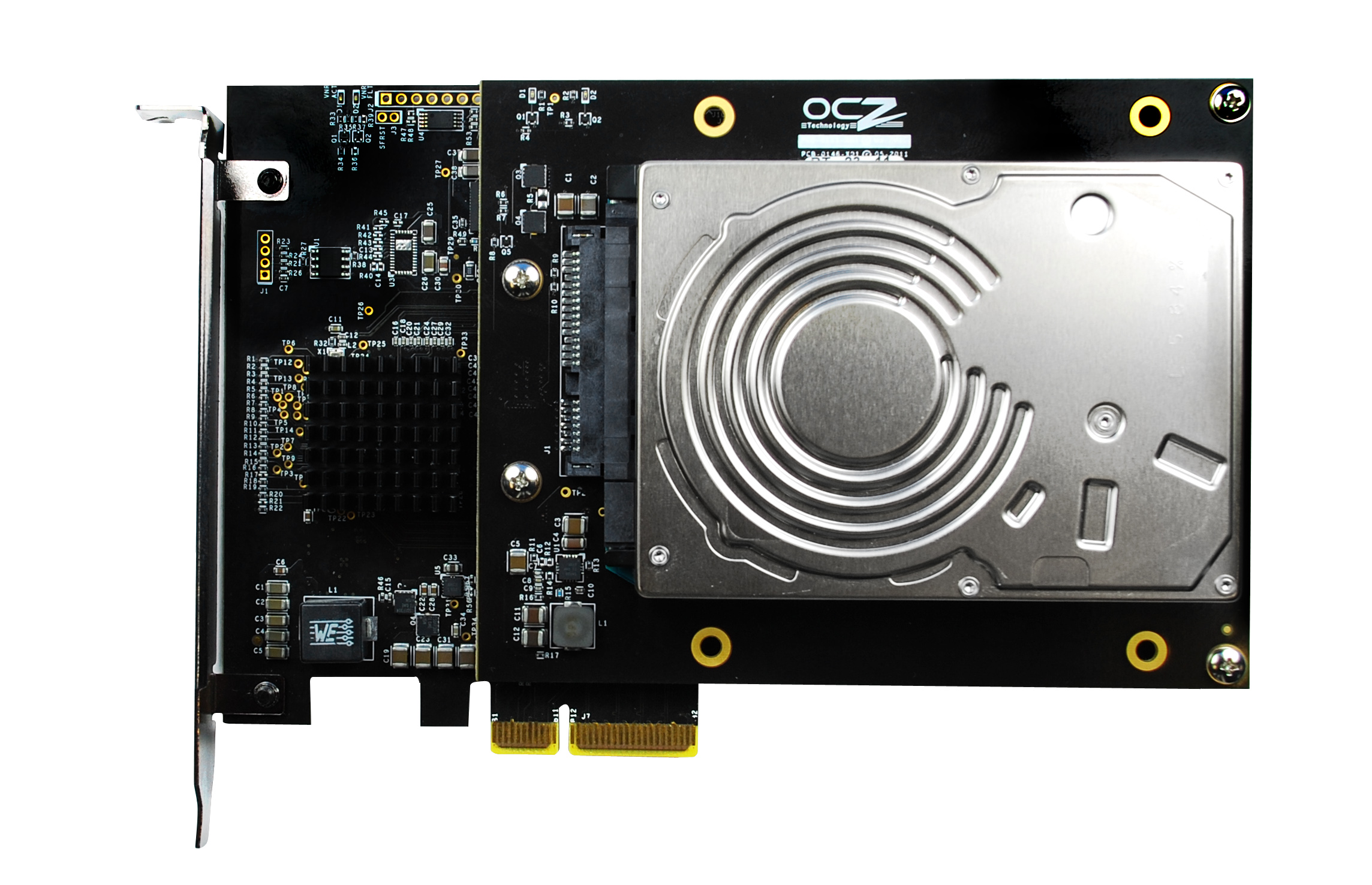