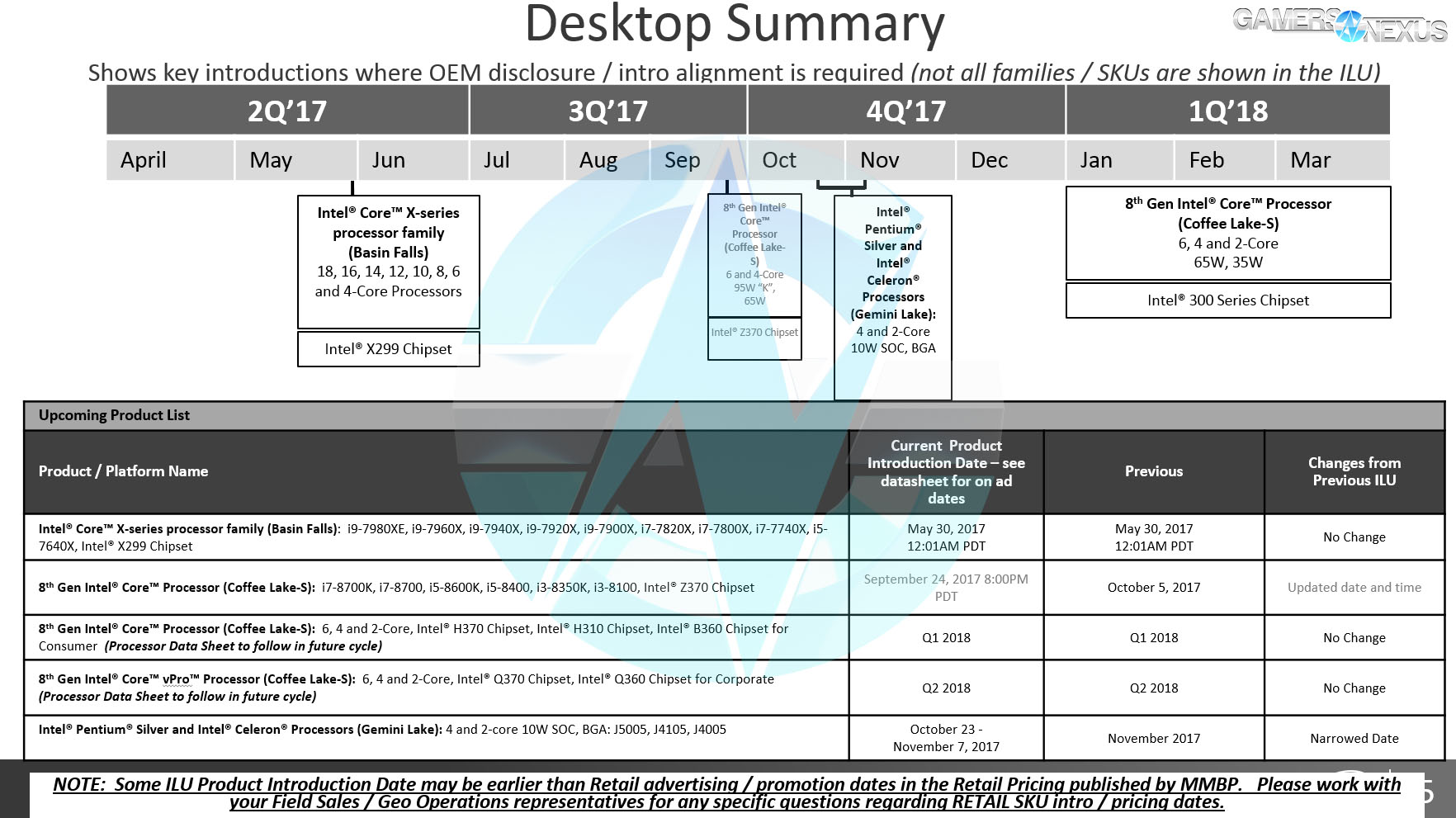 Thanks to a leaked Intel Launch Update document we now know that Intel is planning to launch a slew of new 300-series chipsets early next year. Reportedly vetted by Gamer's Nexus, the leaked roadmap mentions H310, H370, and B360 on the consumer side, Q370 and Q360 for the business market. There is also a tease of a Z390 chipset that is set to replace Z370 as the high-end motherboard platform of choice.

As if things were not already confusing enough in the _370 chipset space (with Intel's Z370 and AMD's X370), Intel plans to add a H370 chipset to the mix which should be a bit cheaper and have less overclocking, PCI-E slots, and M.2 ports. Intel has also had to tweak the name for its B series chipset to B360 as well so as to not confuse itself with AMD's B350 chipset offering. Finally, there will be a H310 chipset for budget options. These three consumer chipsets are slated for launch in Q1 2018.

Finally, Intel is rumored to launch a Z390 chipset sometime in the second half of next year (2H 2018). According to Gamer's Nexus, industry sources have indicated that Z370 is more of a "stop gap" solution that Intel used to quickly roll out its Coffee Lake processors. Z370 is intended to only support Coffee Lake and while engineering boards were able to support Kaby Lake-R and Coffee Lake CPUs, this functionality has been disabled in firmware. Z370 based motherboards reportedly have tweaked PCB trace optimizations and power delivery needed to support the new processors. Z390 meanwhile will be the successor to Z370 in 2018 and will offically support the entire range of consumer level Coffee Lake processors as well as rumored 8 core (16 thread) processors of undetermined architecture (maybe 14nm++ Coffee Lake but would be a rather big but not unheard of die at ~176mm^2 so rumors also speculate that these 8 core parts could be based on 10nm Ice Lake instead).

Beyond the existence of these chipsets, the ILU did not go into details on the features they would offer or things like price points for motherboards based on them, naturally. As usual you should take these types of leaks with a teaspoon of salt, but it is interesting that Intel may be stepping up their game in rolling out new products faster and moving more cores to the mainstream chips–finally!