The flower, not the hormone

AMD has its next annual software release with some impressive new features!

It was way back in December of 2014 that AMD and the Radeon group first started down the path of major driver updates on an annual cadence. The Catalyst Omega release marked the beginning of a recommitment to the needs of gamers (and now professionals) with more frequent, and more dramatic, software updates and improvements. Cognizant of the previous reputation the company had with drivers and software, often a distant second to the success that NVIDIA had created with it GeForce drivers, Radeon users were promised continuous increases.

And make no mistake, the team at AMD had an uphill battle. But with releases like Omega, Crimson, ReLive, and now Adrenalin, it’s clear that the leadership has received the message and put emphasis on the portion of its product that can have the most significant impact on experience.

AMD joins us at the PCPer offices to talk through all the new features and capabilities!

Named after the adrenalin rose, rather than the drug that flows through your body when being chased by feral cats, this latest major software release for Radeon users includes a host of new features and upgraded ones that should bring a fresh coat of paint to any existing GPU. Two big features will steal the show, the new Radeon Overlay and a mobile app called AMD Link. But expansions to ReLive, Wattman, Enhanced Sync, and Chill are equally compelling.

Let’s start with what I think will get the most attention and deservedly so, the Radeon Overlay. As the name would suggest, the overlay can be turned out through a hotkey in-game, and allows the gamer to access graphics card monitoring tools and many driver settings without leaving the game, having to alt-tab, or having to close the game to apply. By hitting Alt-R, a screen will show up on the right-hand side of the display, with the game continuing to run in the background. The user will be able to interact with the menu via mouse or keyboard, and then hit the same hotkey or Esc to return. 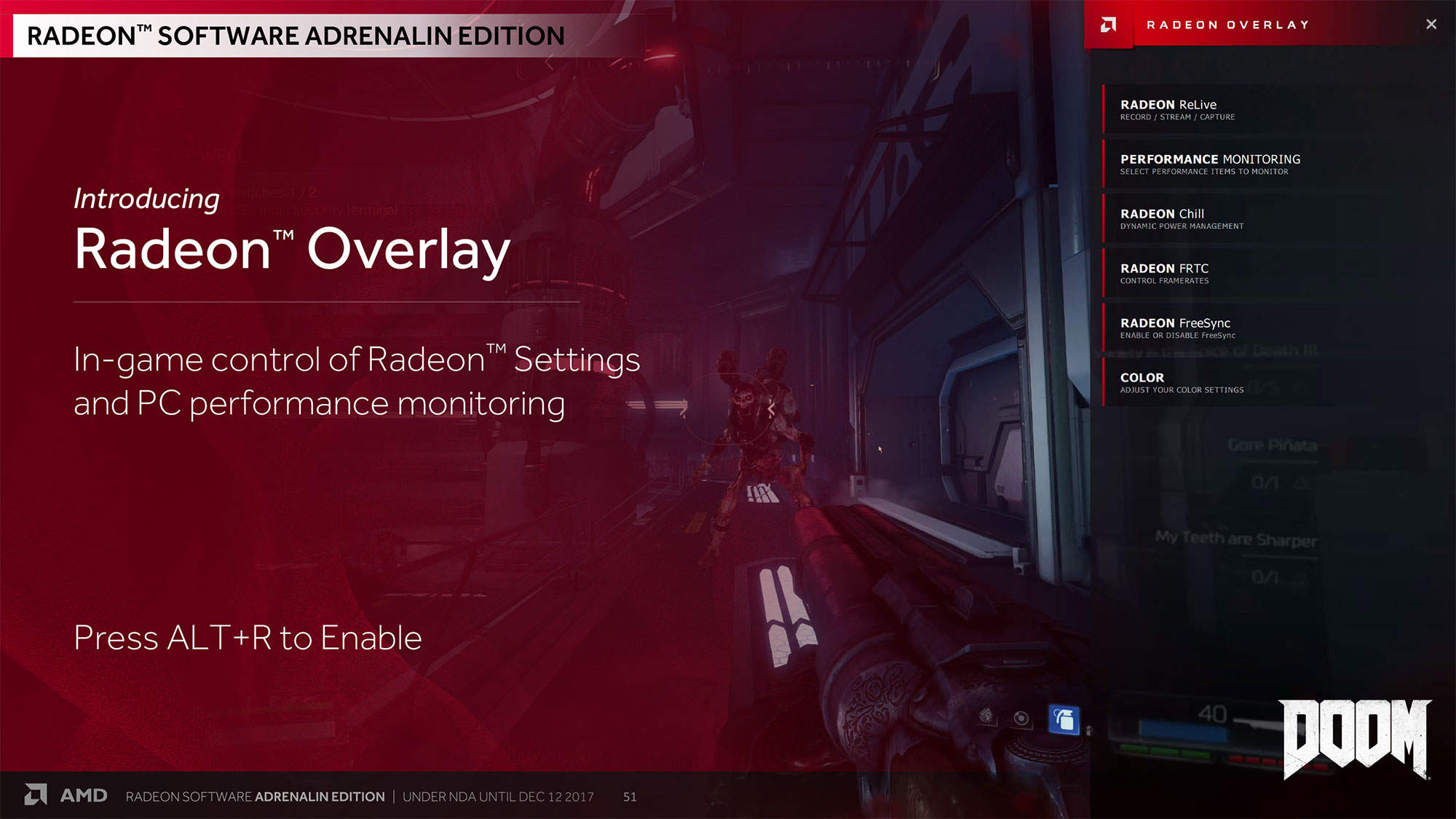 While it is a limited subset of the total Radeon Software settings, it is a good amount of the options that appear to be interesting to play with while in-game. You’ll be able to configure the ReLive streaming, recording, and interaction modules and a new set of monitoring tools that will remain on the screen after the overlay drops away. You will be able to show frame rate and a number of GPU and system settings including GPU utilization, clocks, memory utilization, temperature, etc. You can set the sampling interval and where on the screen it resides; it’s a surprisingly flexible tool for this initial implementation. 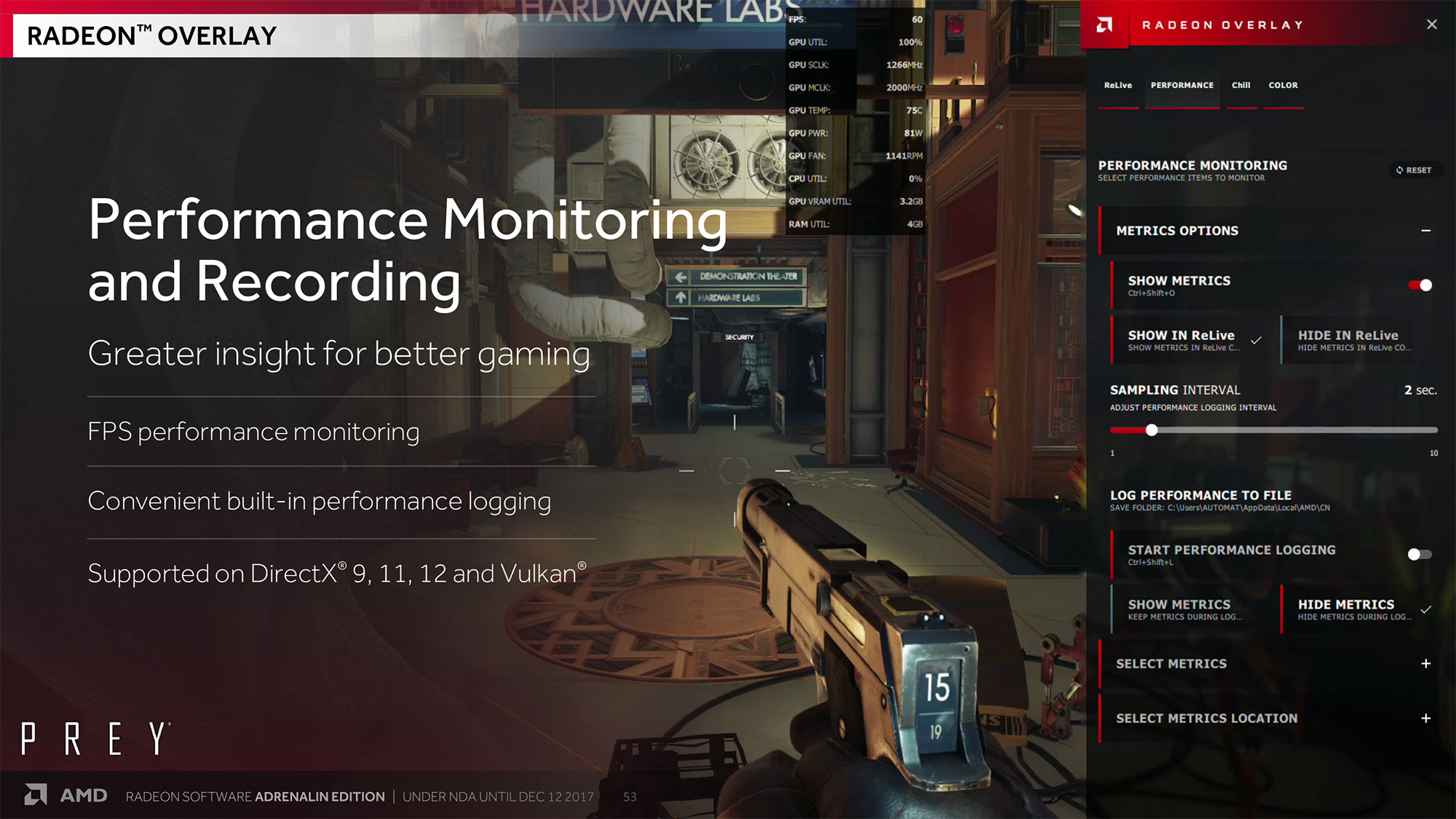 Other adjustments include FreeSync enabling, Frame Rate Target Control, and color adjustment. Maybe the most interesting is that of Radeon Chill, AMD’s power saving feature that can adjust the frame rate of the game based on the activity and input received from the gamer. Being able modify the upper and lower bounds of Chill while in game, and having them apply in real time, gives gamers the ability to test and try out this new feature without commitment and without the pain and suffering of going back and forth from the game to the driver, etc.

There is a lot of potential of what AMD could do with the Radeon Overlay. I would like to see even more of the driver features added to it especially Wattman – being able to apply and test new overclocking settings through Radeon Software within the game, and without the need for a second monitor, would be an awesome addition.

The AMD Link mobile application for Android iOS devices is going to be the second most talked about addition. As you might imagine, this feature complements Radeon Software as a second screen. It allows you to control and preview your Radeon ReLive moments, monitor your GPU and CPU hardware, and access auxiliary features like news from AMD, notifications of new drivers, etc. 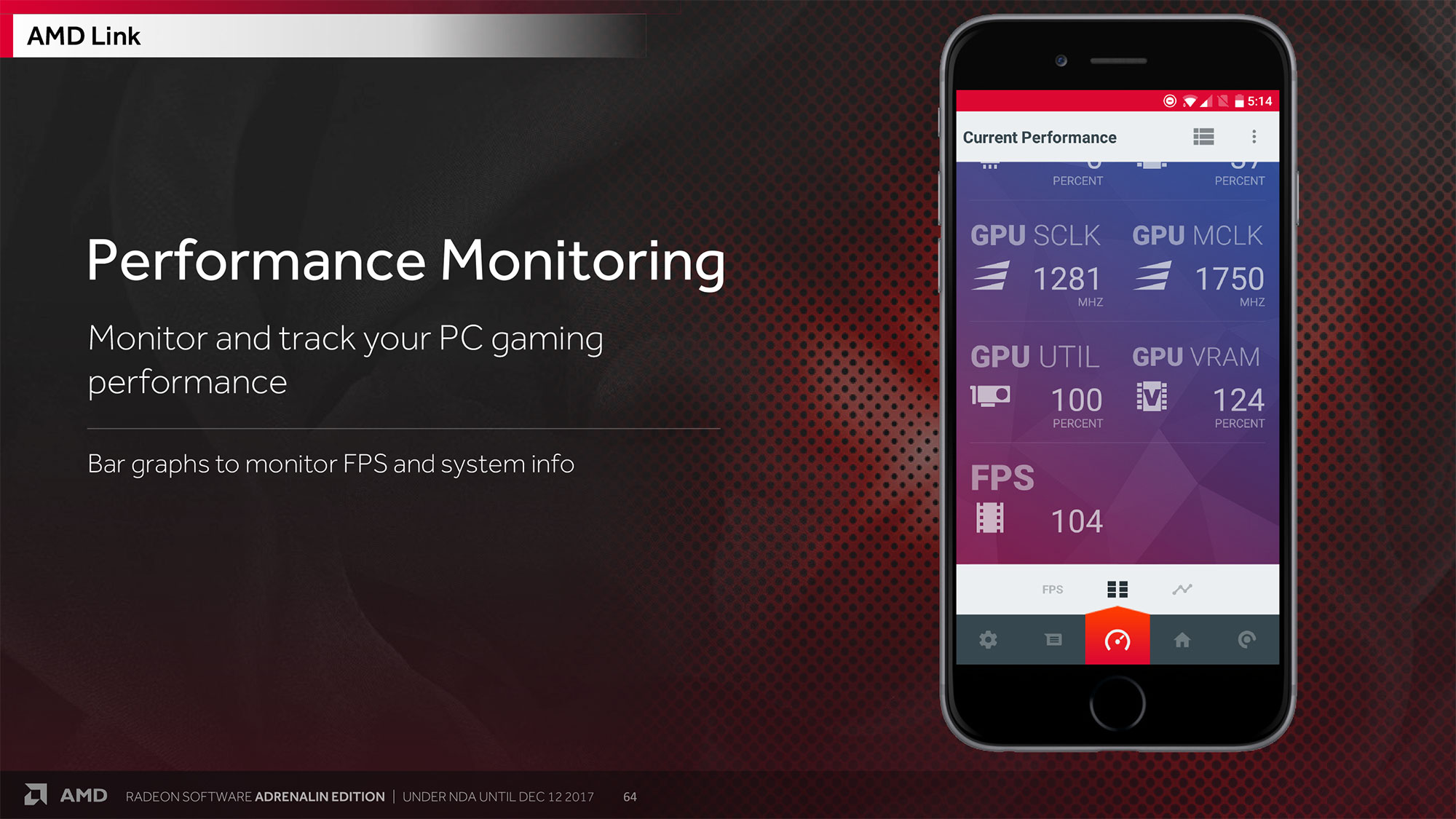 The setup process is dead simple and uses a QR code activated Wi-fi connection and the interface is clean. The usefulness of this is going to greatly depend on the consumer, unlike the overlay that I think will apply to and benefit nearly everyone. The AMD Link software gives you the ability to use your smart phone or a tablet to monitor your clocks, temperatures, and utilization without the need to clutter your screen with the overlay itself, but for me, having it *just* out of eyeshot might make it just out of mind as well. 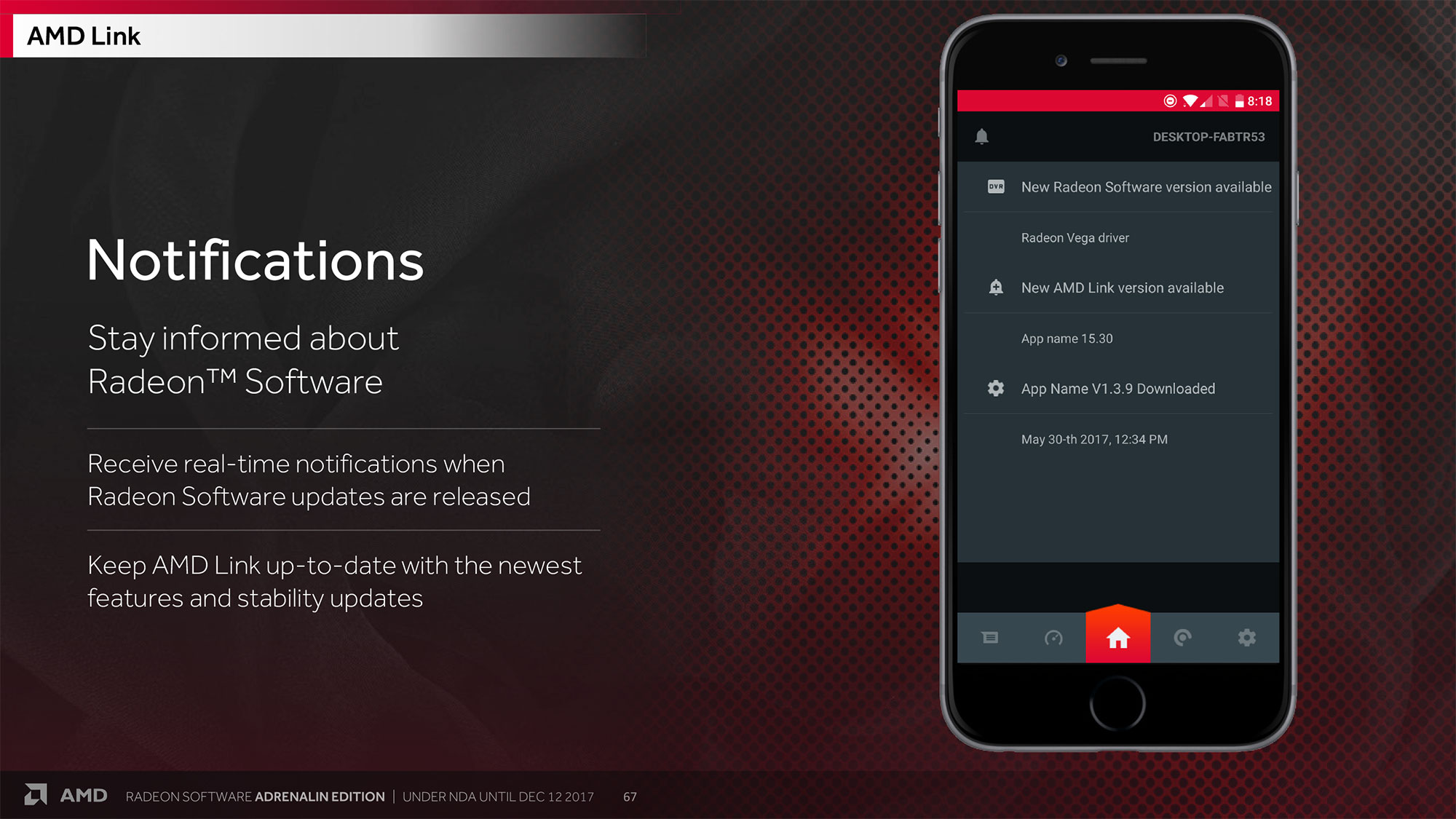 To some gamers though, the idea of being able to monitor your system and interact with AMD news and receive notifications will make it worth the install. And for free, it’s hard to complain about the functionality it offers. I do expect we will see this stretched out in the near-term, adding the ability to modify some settings, handle overclocking, etc. 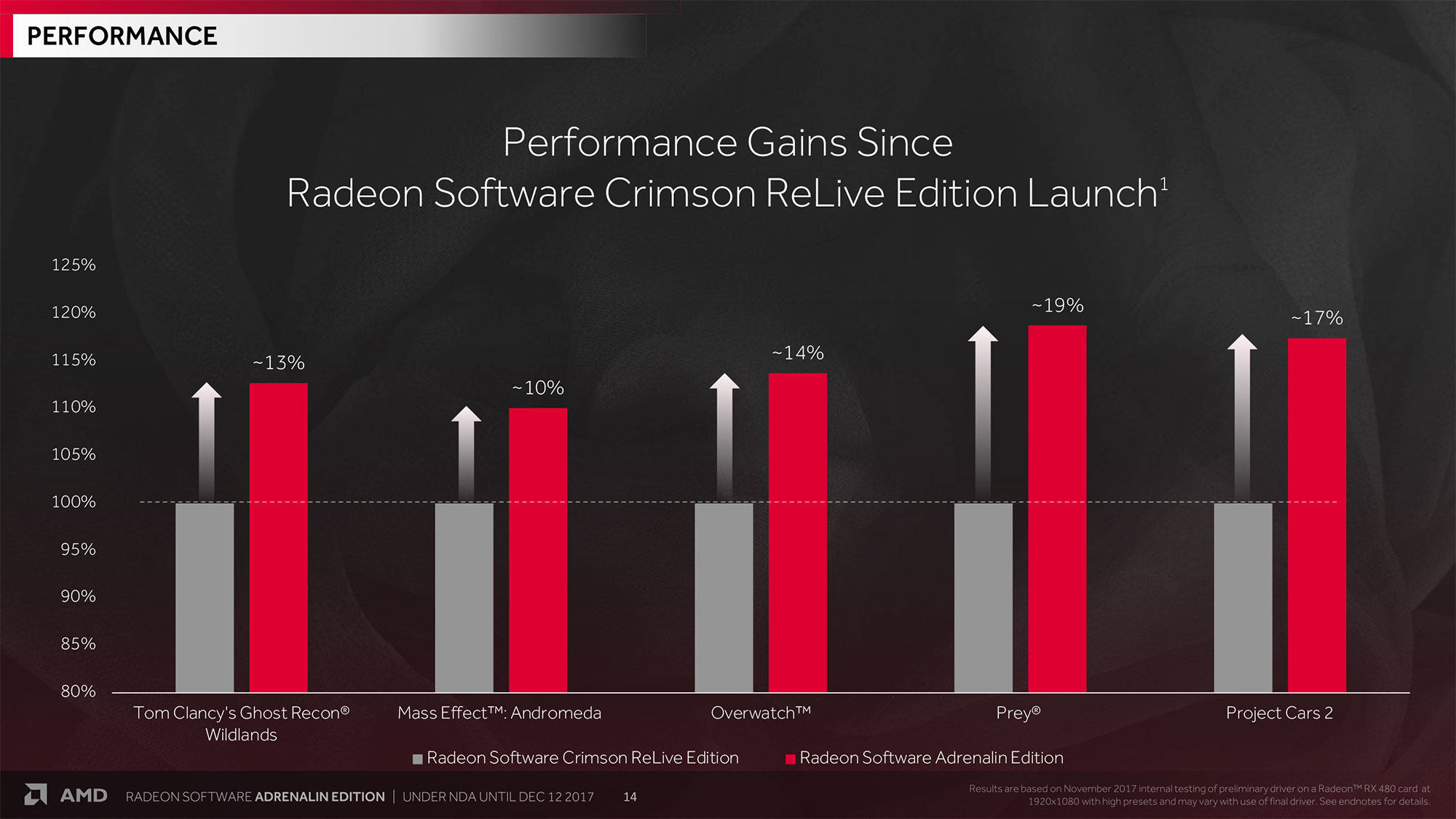 There are no major performance increases with this driver, though AMD was quick to point out during our talks the progress that it has made in addressing day-zero game launches and performance-over-time increases. It’s a fair claim to make: games like Overwatch, Prey, and Project Cars have seen 10%+ performance gains from the driver released this time last year. Demonstrating commitment to gamers for the long term, and not just on the launch day of new hardware, is key to gaining the trust of the entire gaming community. 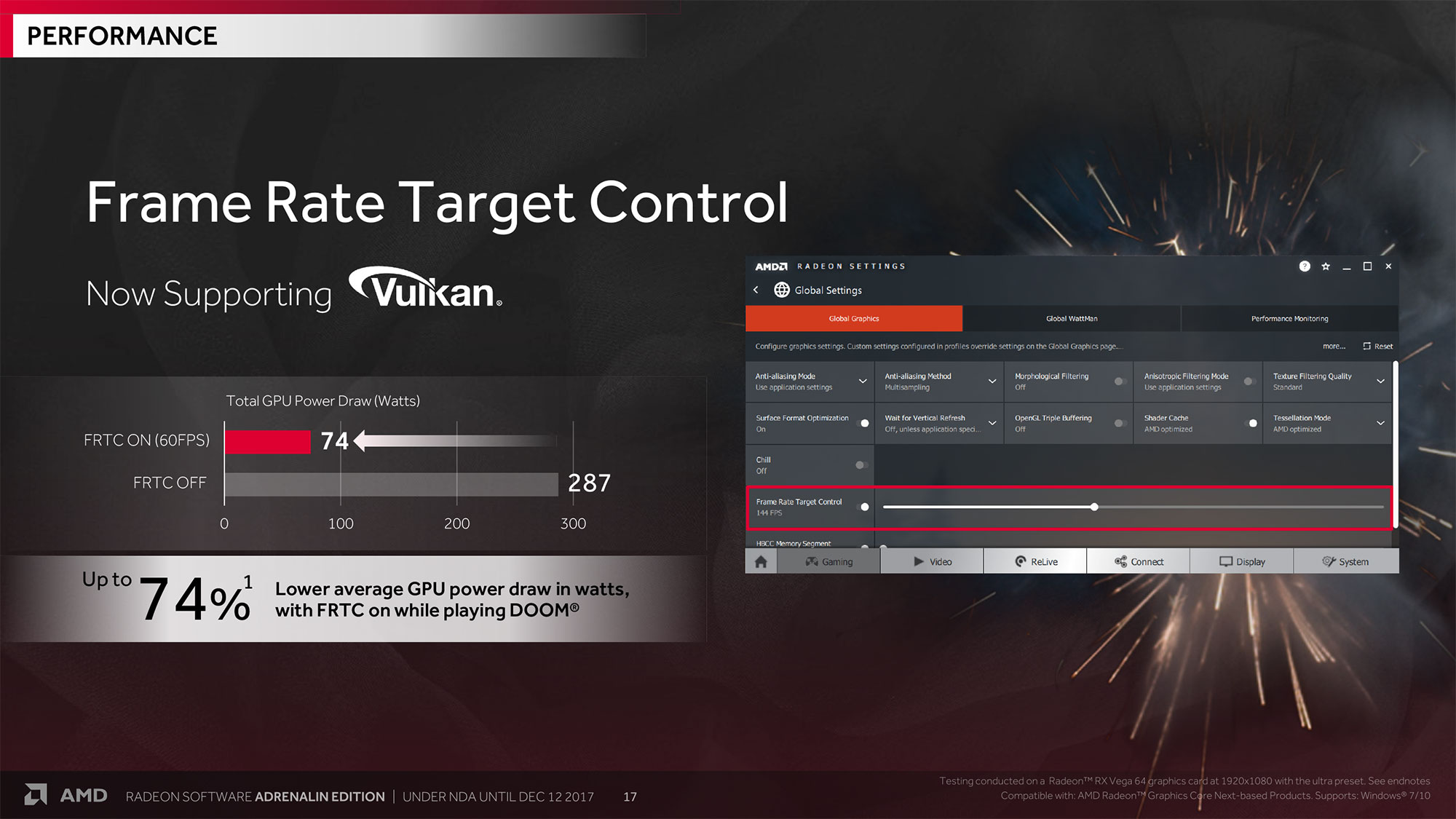 Some of the best features in Radeon Software are being improved with the Adrenalin Edition release. Radeon Chill will no longer be a white-list and will instead offer a global profile. This means the unique and innovative power saving measures will not be held back and can be applied for any and all games on a global or per-game basis. Not only that, but all modern APIs are supported including DX9, 10, 11, 12, and even Vulkan! We are going to be doing some testing with Chill in the near-term to find out how much of an advantage it offers, but from the results we have been shown it looks decent. 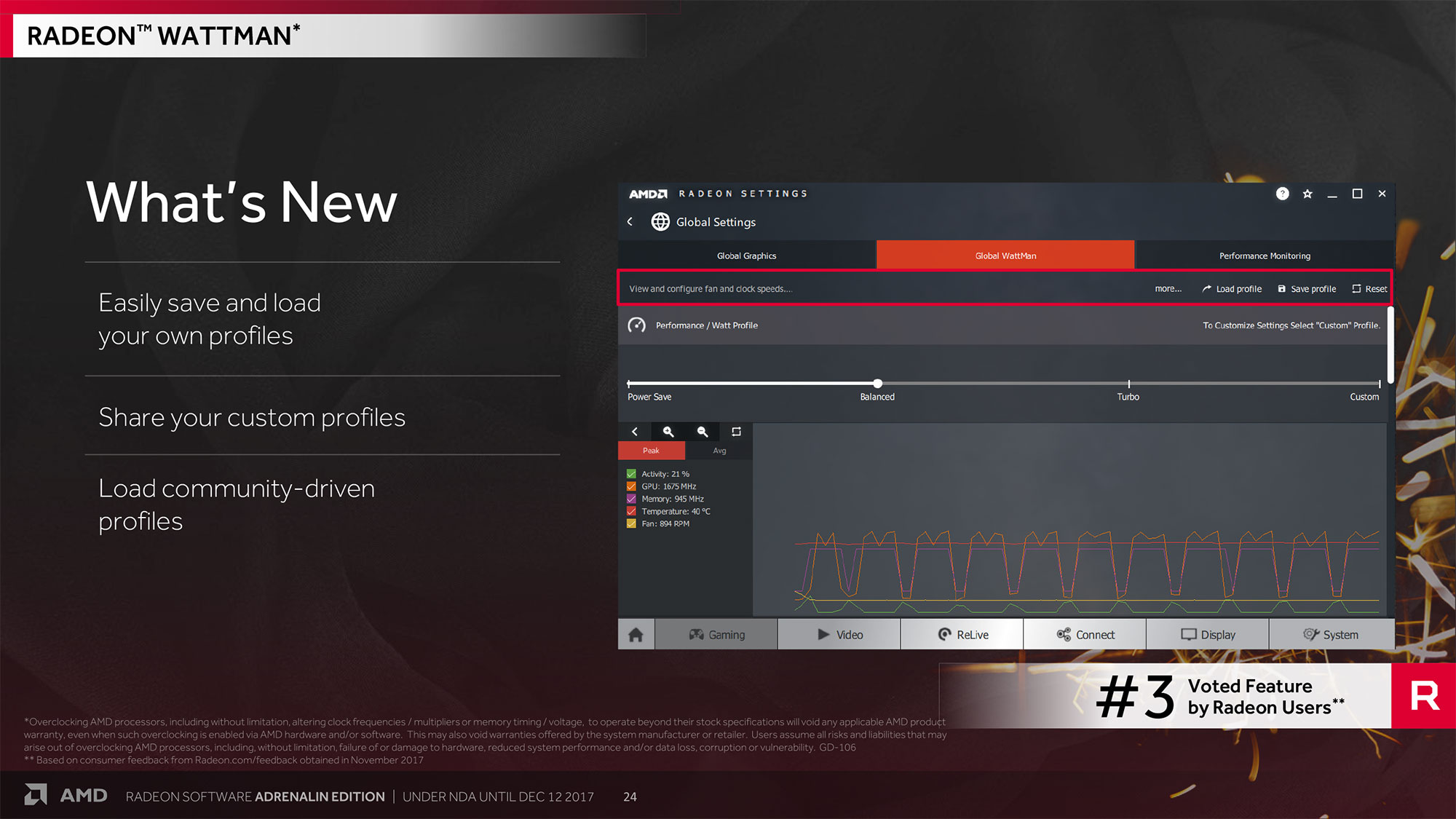 Wattman, the Radeon Software integrated overclocking and monitor tool, gets improved with support for profiles (finally!). These profiles that include overclocking and power management settings, can be saved to a file and utilized later (if your driver crashes and resets, a common complaint) and shared with the community if you think you have found the perfect sweet spot for your flavor RX 580, for example. 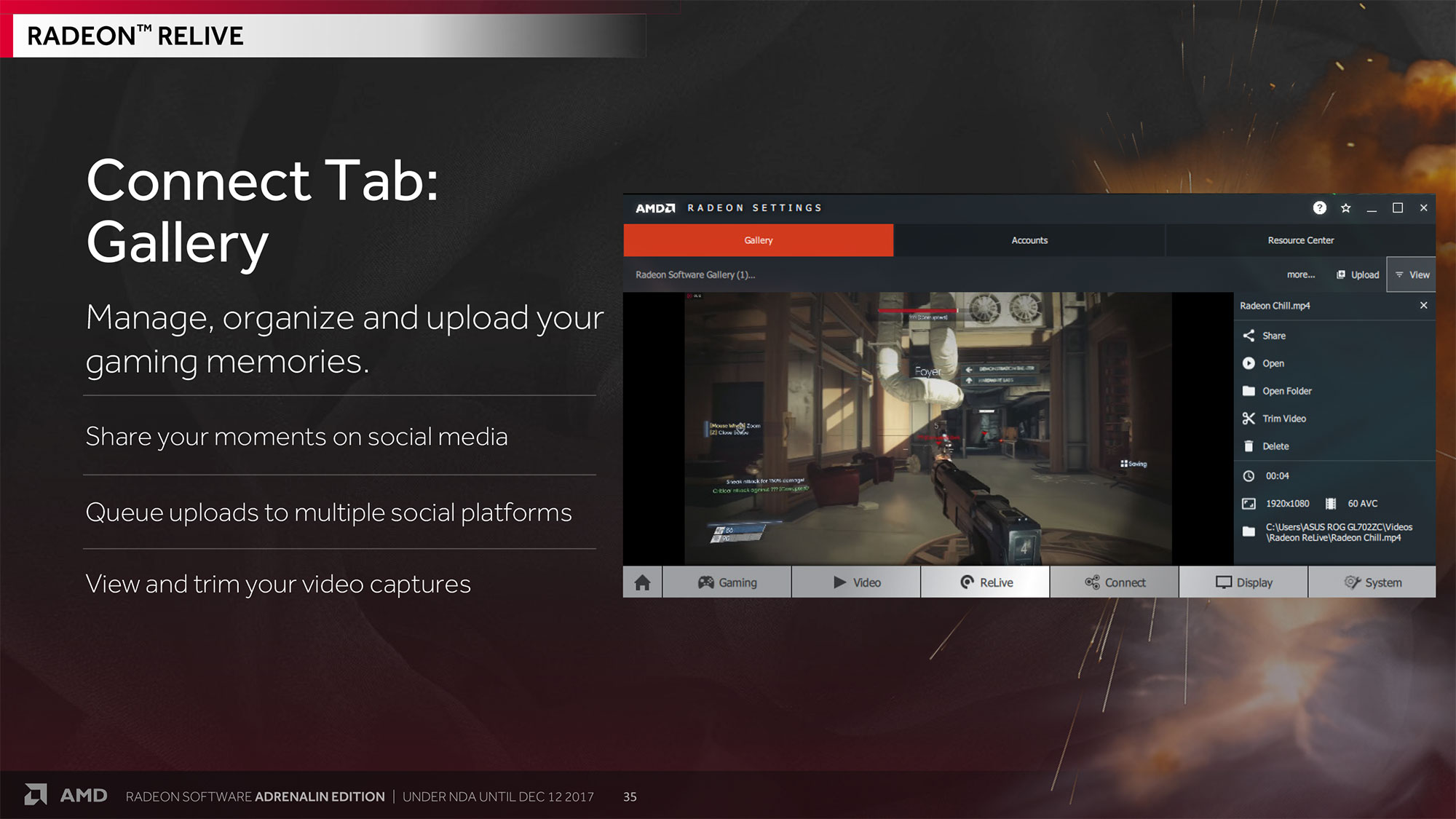 Radeon ReLive gets a BIG feature bump. You can now use the Connect tab to trim and manage your recordings and share them without ever leaving the game. It includes support for YouTube, Twitch, Facebook, and quite a bit more for the international crowd. You can even capture the chat from those services to overlay on your game so if you are live streaming you can easily interact with your audience without a second monitor or leaving the game.

A new partner of AMD is Stage TEN, a third-party browser based tool that handles the complexity of live streams for you, including engaging with multiple gamers, chats, streams and cameras. I am still starting to figure out what Stage TEN can do, but from an ease-of-use standpoint, it looks damned impressive. 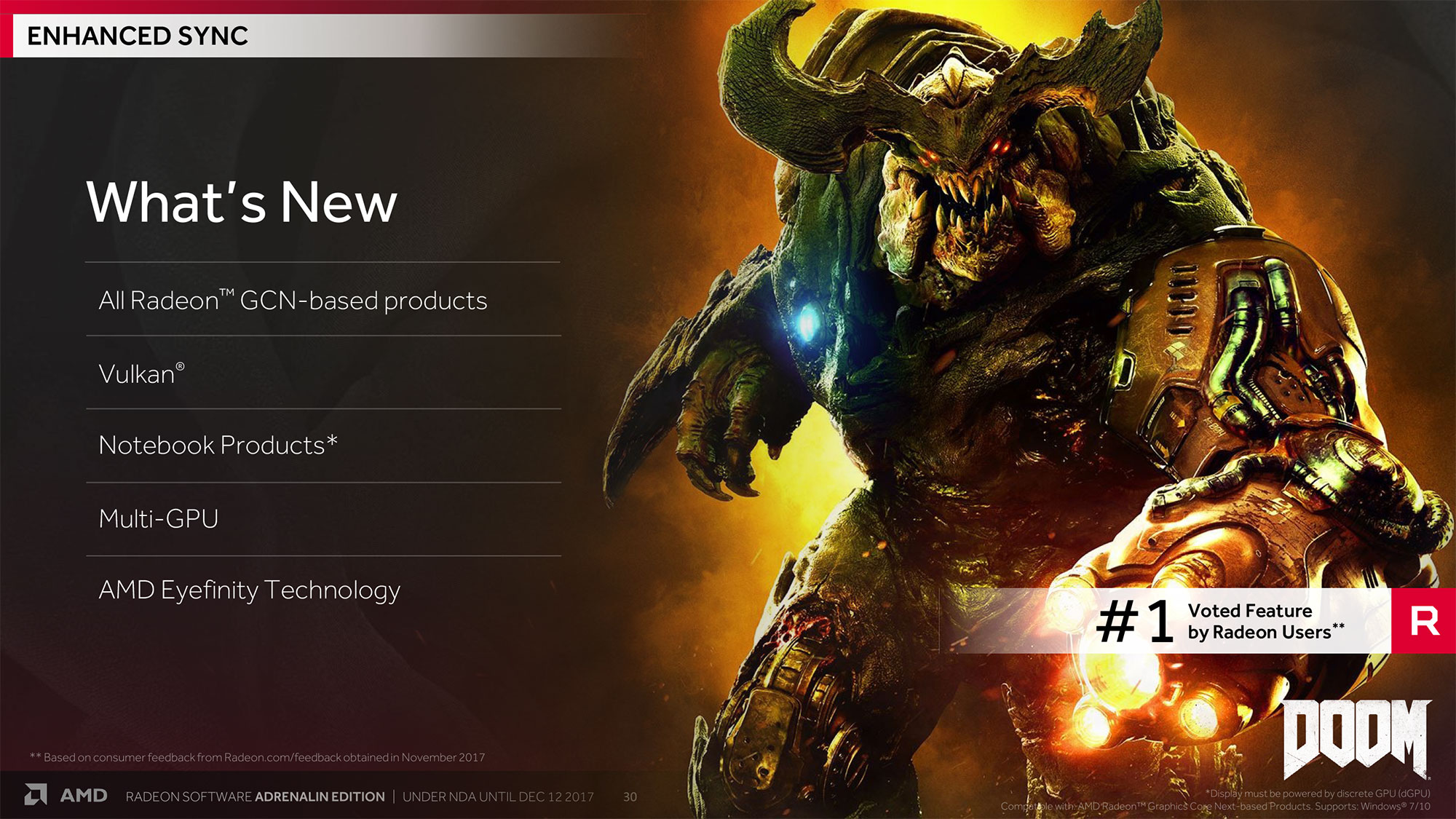 Finally, the Enhanced Sync feature that got a lot of attention during the RX Vega launch this year is back with updates. It is now available on ALL GCN-based Radeon graphics cards, multi-GPU configurations, EyeFinity display setups, and yes, Vulkan API based games. 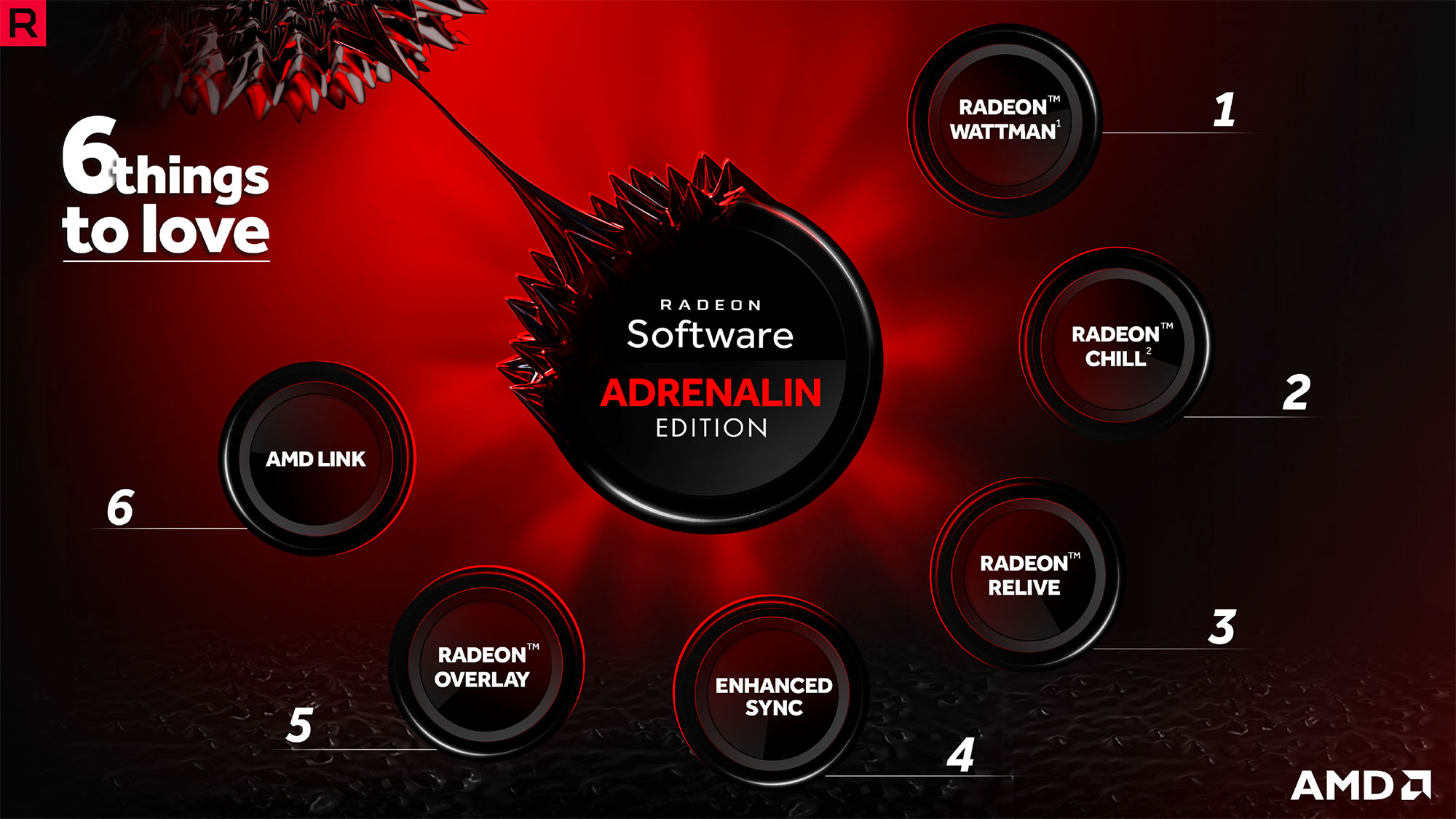 Though without a killer performance addition, the new AMD Radeon Software Adrenalin Edition puts a lot on the table for current and future Radeon gamers. AMD addressed some of the areas that were the biggest requests from users with the addition of Wattman profiles, expanding Chill to nearly all games, ReLive’s ability to do in-menu edits and updated integrations, and by bringing Enhanced Sync to all GCN products and APIs.

The addition of features like the Radeon Overlay, that I think will set the trend for drivers and capabilities for years to come, and the AMD Link mobile app, show that the software team at AMD is keen to try and stay ahead of the curve, no longer happy with simply playing catch-up.

Clearly the software development teams at AMD and the Radeon Technologies Group are keeping their eyes on the prize here, hitting another promised annual release despite the turmoil that has been rolling through the organization of late. Radeon and the executive team at AMD need to prove that ground is being gained, and though not as sexy as a new GPU launch, the software is still as important a part of the total solution as anything. Keeping existing users happy with the forward progress, while getting new buyers to climb on board, is the goal. Radeon Software Adrenalin Edition puts the AMD brand on a pedestal and focuses the community on it unlike any GeForce software launch in recent memory.