The 760p performs surprisingly well, especially for the price!

Intel has been doing great with their Optane / 3D XPoint products lately, but what about NAND? Samsung had been leading the pack with their VNAND for a few years now, forcing competitors to struggle to keep up on the capacity, performance, and endurance fronts. Intel's 3D NAND production (announced in 2015) is finally starting to come into its full stride, with 64-layer TLC NAND shipping in their 545S in mid 2017. With SATA essentially covered, PCIe NAND solutions have been a bit rough for Intel. The SSD 600p was their first M.2 PCIe product, launching over a year ago. While it was cost-effective, it was not a stellar performer. This left the now extremely dated SSD 750 as their flagship NAND product. It was great for its time, but was only available in HHHL and U.2 form factors, precluding any possibility of mobile use. With their 3D NAND finally in a good position, what Intel really needed was a truly solid M.2 product, and I'm happy to report that such a thing has finally happened: 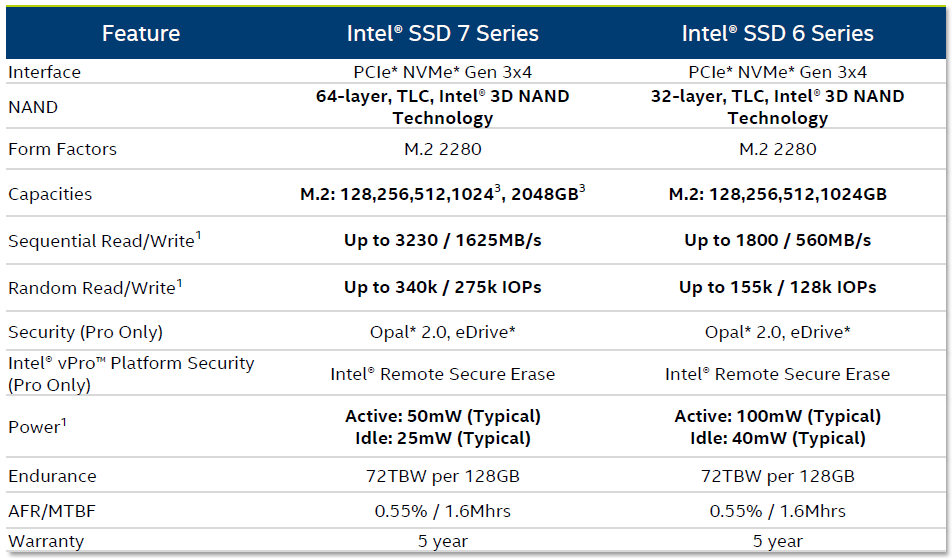 This chart makes me happy. Finally, an Intel M.2 SSD with competitive specs! Note that the performance specs all come in at 2x the 600p, all while consuming half of the power of the older model. Endurance remains the same, but the 600p's problems were with performance, not endurance.

Packaging was very similar to that of the 600p and other Intel products. Simple and no frills. Gets the job done.

You know you want to see how these perform, right? Read on to find out!