Putting your APU to work for more than just graphics

It's clear by now that AMD's latest CPU releases, the Ryzen 3 2200G and the Ryzen 5 2400G are compelling products. We've already taken a look at them in our initial review, as well as investigated how memory speed affected the graphics performance of the internal GPU but it seemed there was something missing.

Recently, it's been painfully clear that GPUs excel at more than just graphics rendering. With the rise of cryptocurrency mining, OpenCL and CUDA performance are as important as ever.

Cryptocurrency mining certainly isn't the only application where having a powerful GPU can help system performance. We set out to see how much of an advantage the Radeon Vega 11 graphics in the Ryzen 5 2400G provided over the significantly less powerful UHD 630 graphics in the Intel i5-8400.

Before we take a look at some real-world examples of where a powerful GPU can be utilized, let's look at the relative power of the Vega 11 graphics on the Ryzen 5 2400G compared to the UHD 630 graphics on the Intel i5-8400. 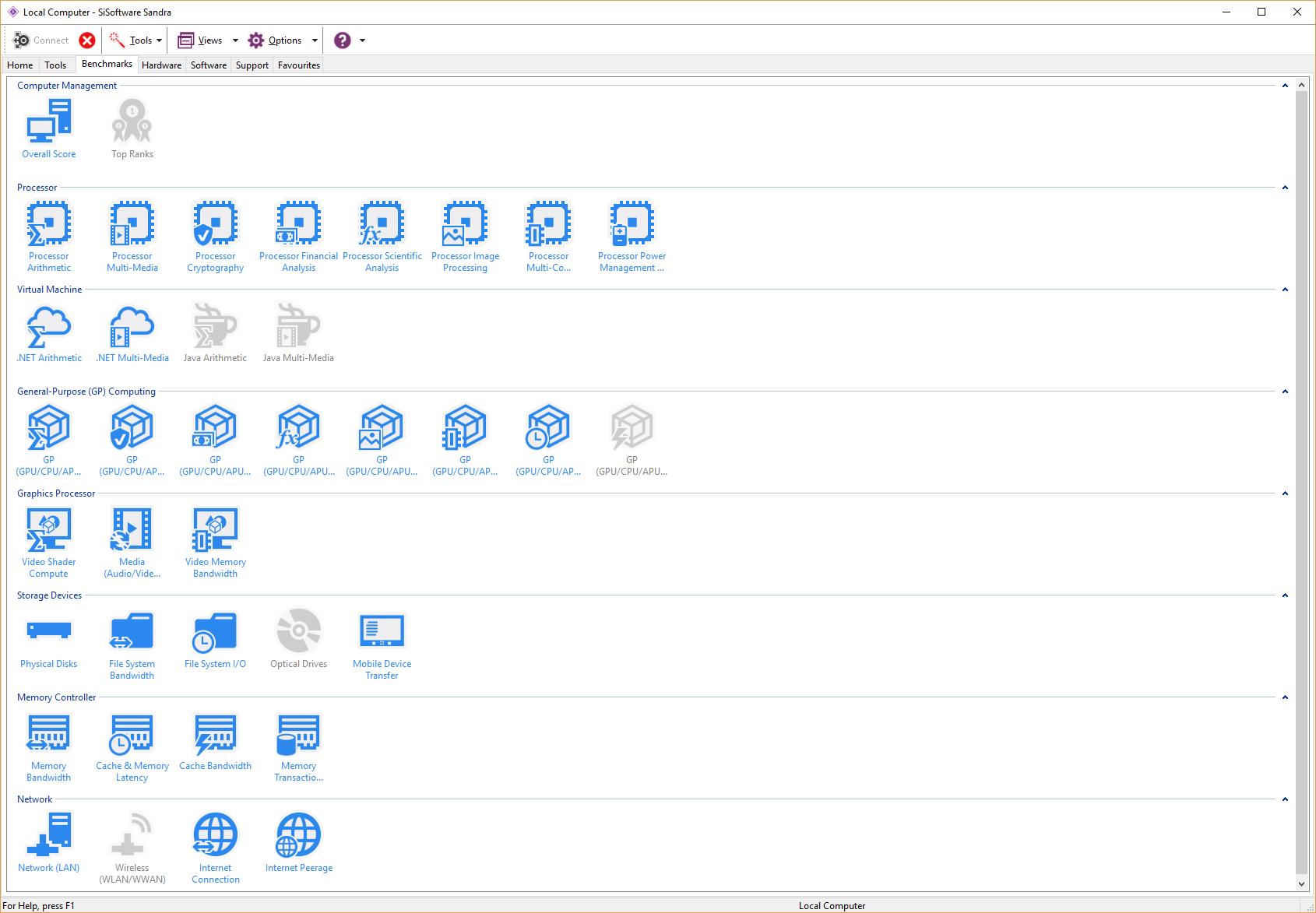 SiSoft Sandra is a suite of benchmarks covering a wide array of system hardware and functionality, including an extensive range of GPGPU tests, which we are looking at today.

Comparing the raw shader performance of the Ryzen 5 2400G and the Intel i5-8400 provides a clear snapshot of what we are dealing with. In every precision category, the Vega 11 graphics in the AMD part are significantly more powerful than the Intel UHD 630 graphics. This all combines to provide a 175% increase in aggregate shader performance over Intel for the AMD part.

Now that we've taken a look at the theoretical power of these GPUs, let's see how they perform in real-world applications. 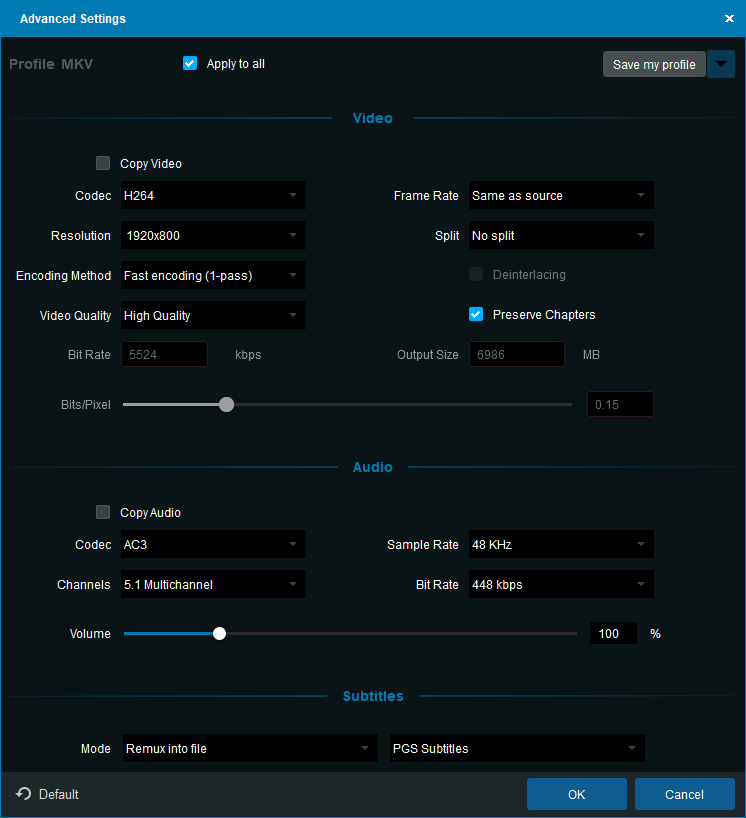 Luckily, we found an alternative in DVDFab, a popular application for ripping and converting formats such as DVD and Blu-Ray. For our test, we are using a 1080p Blu-Ray ISO source, and transcoding it to a smaller filesize 1080p H264 version with an average bitrate of 5Mbps. 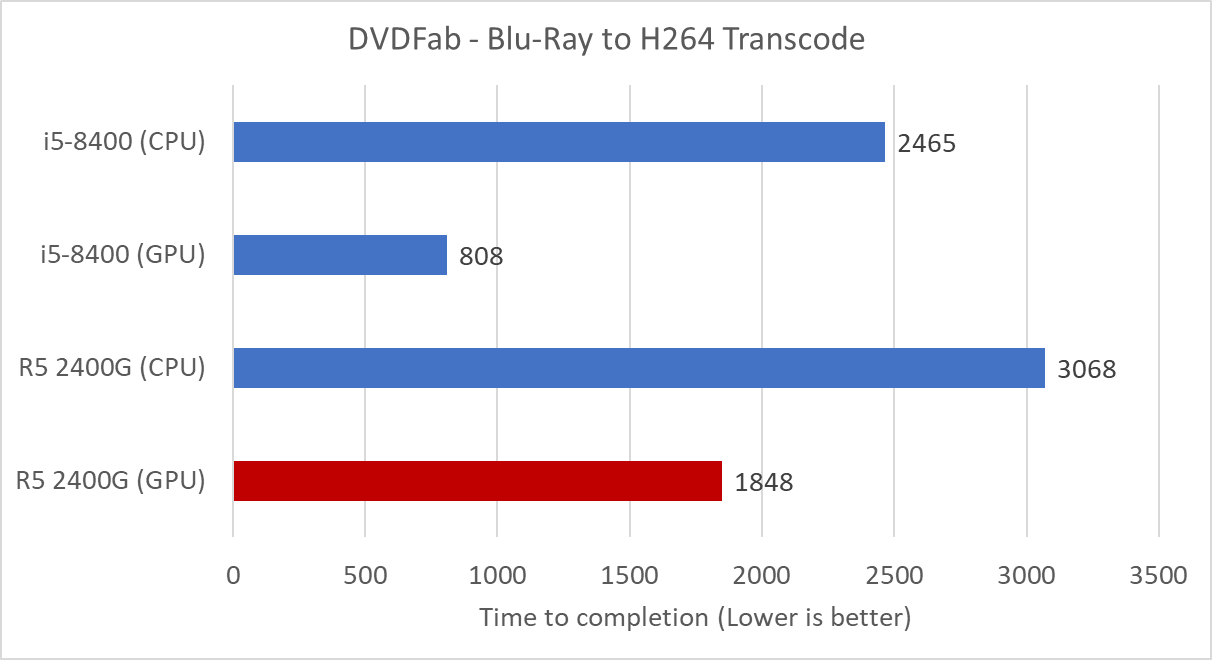 In DVDFab, it's clear that there is an advantage to encoding video on the GPU instead of purely on the CPU cores. Both the AMD and Intel parts see much shorter video transcode times when running on their GPUs, with the Ryzen 5 2400G seeing a 60% speedup. While there can be a quality difference between GPU video encoders versus CPU encoders, the resulting files were very similar in our visual inspection in this particular case.

Despite the advantages in raw compute power, the AMD Ryzen 5 2500G is significantly slower than the Intel Quick Sync-enabled i5-8400. The answer to this most likely lies in optimization.

While Quick Sync has been updated frequently in cadence with new processor releases, the last update for AMP's APP SDK was nearly 2 years ago. In fact, APP has been superseded by a replacement framework, AMD's Advanced Media Framework (AMF). However, we have been unable to find any software support for this toolset beyond AMD's own ReLive application.

We'd love to see AMF support added to an application like Handbrake to allow owners of devices with modern AMD graphics to be able to fully utilize the video encoding features of their GPUs.

The performance depends on various factors, such as the GPU processor on your hardware, on the drivers used. The graphics card has to display a huge amount of geometry (nearly 1 million polygons) and textures, as well as a variety of effects, such as environments, bump maps, transparency, lighting and more to evaluate the performance across different disciplines and give a good average overview of the capabilities of your graphics hardware. The result is measured in frames per second (fps). The higher the number, the faster your graphics card is. 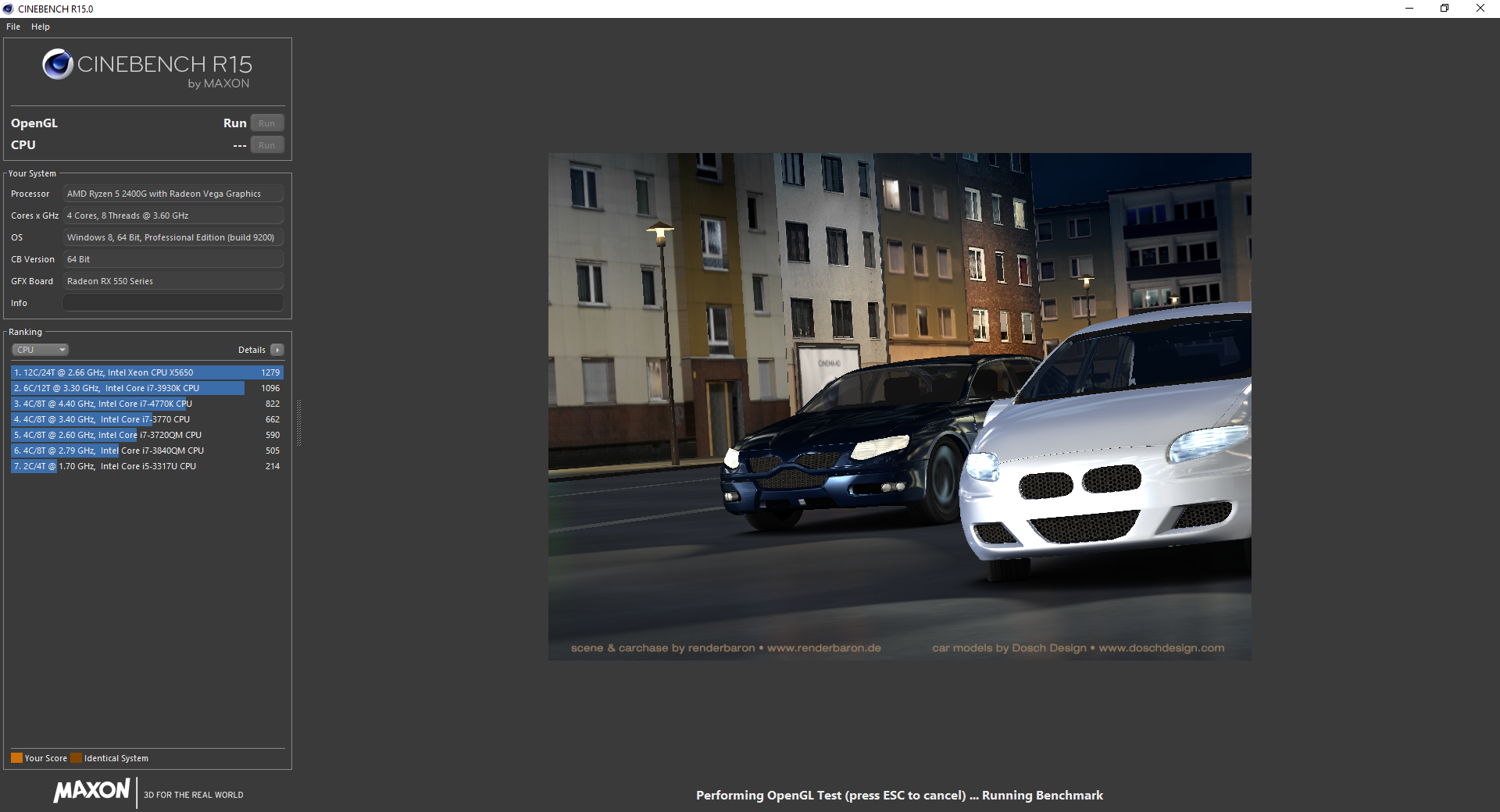 A go-to CPU benchmark, Cinebench R15 also contains an OpenGL-based test meant to stress the rendering power of GPUs both integrated and discrete. 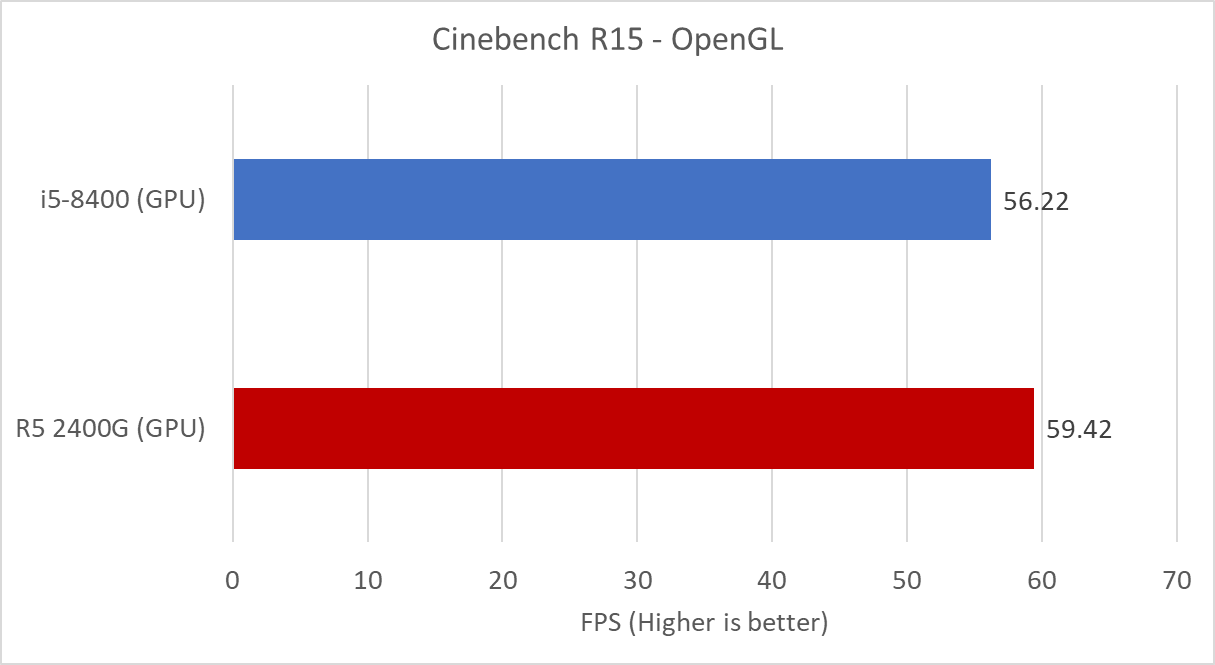 OpenGL performance of both of these parts is similar, with the Ryzen 5 2400G sporting a 5% performance advantage over the Intel i5-8400. 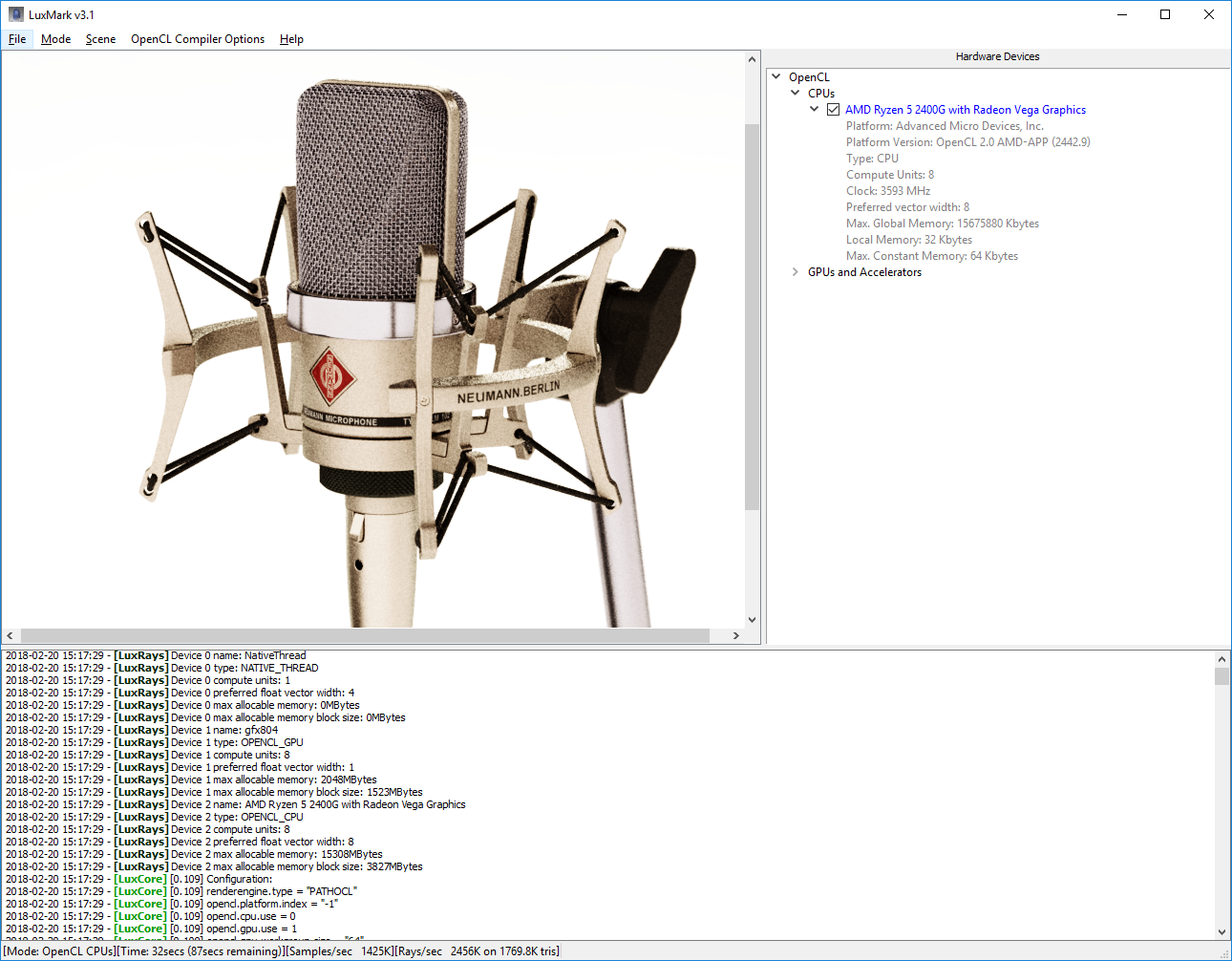 For this test, we are using the "Neumann" scene in Luxmark 3.1—the middle compute intensity scene, consisting of almost 1,769,000 triangles. 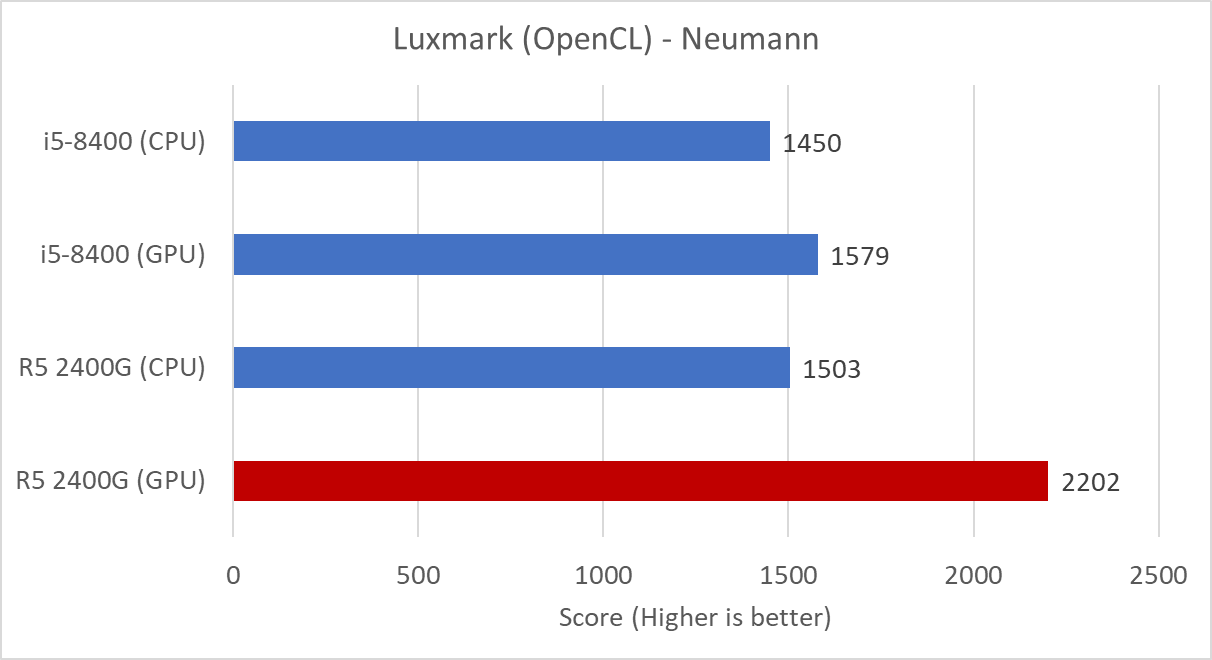 Interestingly, the Intel i5-8400 shows very little scaling running on the CPU versus the GPU in OpenCL rendering.

V-Ray is popular third-party renderer that plugs into the most powerful CAD and 3D modeling applications. With plugins for 3ds Max, Maya, Revit, Rhino, and more, V-Ray is widely used for high-quality renderings in commercial applications such as architecture and product design.

V-Ray Benchmark is a free standalone application which allows users to evaluate hardware without having to install a full suite of software or provide a software license. For AMD GPUs, V-Ray Benchmark uses an OpenCL renderer, while for NVIDIA GPUs a CUDA-enabled renderer is used.

Interestingly enough, even with the newest drivers for the UHD 630 graphics on the i5-8400, the V-Ray Benchmark application couldn't find an OpenCL render device on our Intel test bed. Due to this limitation, we decided to compare the rendering time of the Ryzen 5 2400G to an entry-level discrete GPU, the AMD RX 550.

CPU and GPU rendering times cannot be compared with V-Ray due to the use different complexity scenes between the two tests. 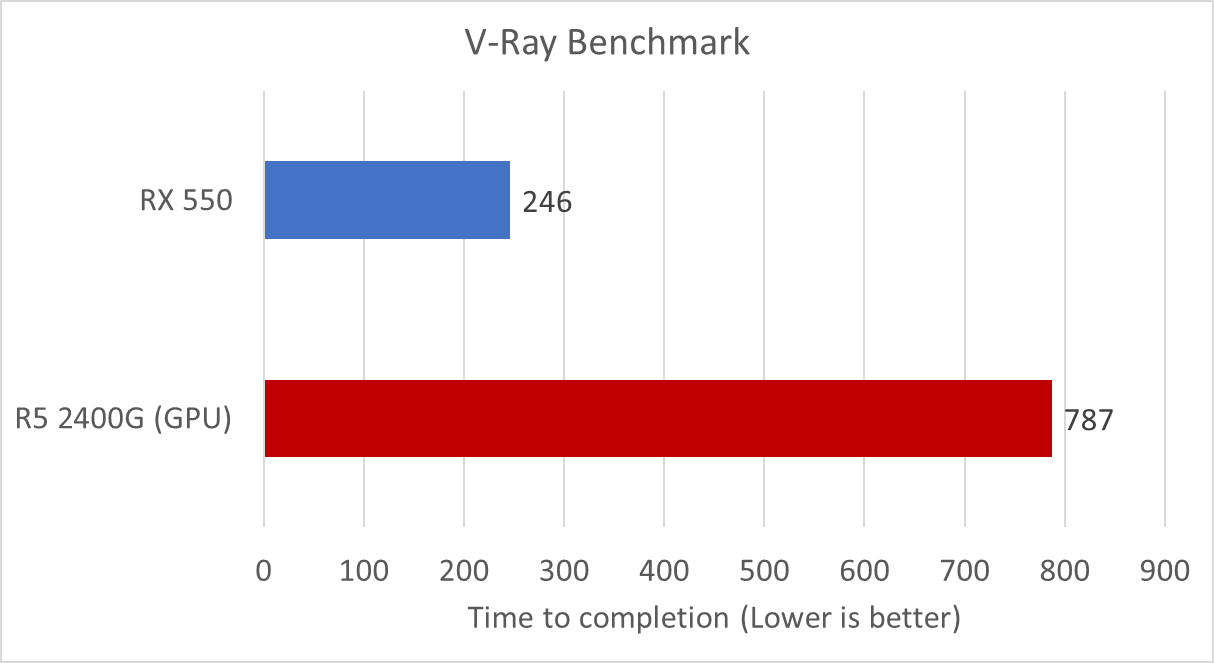 As expected, the RX 550 provides a significant speed advantage over the Ryzen 5 2400G at about 3.2x. However, I am impressed with how well the integrated graphics on the 2400G were able to handle an intensive task like raytraced rendering especially comparing the price of $130 for just the RX 550 to $170 for the APU. Much of this performance gap is likely attributed to the slower memory sub-system on the Ryzen hardware (DDR4 vs GDDR5). 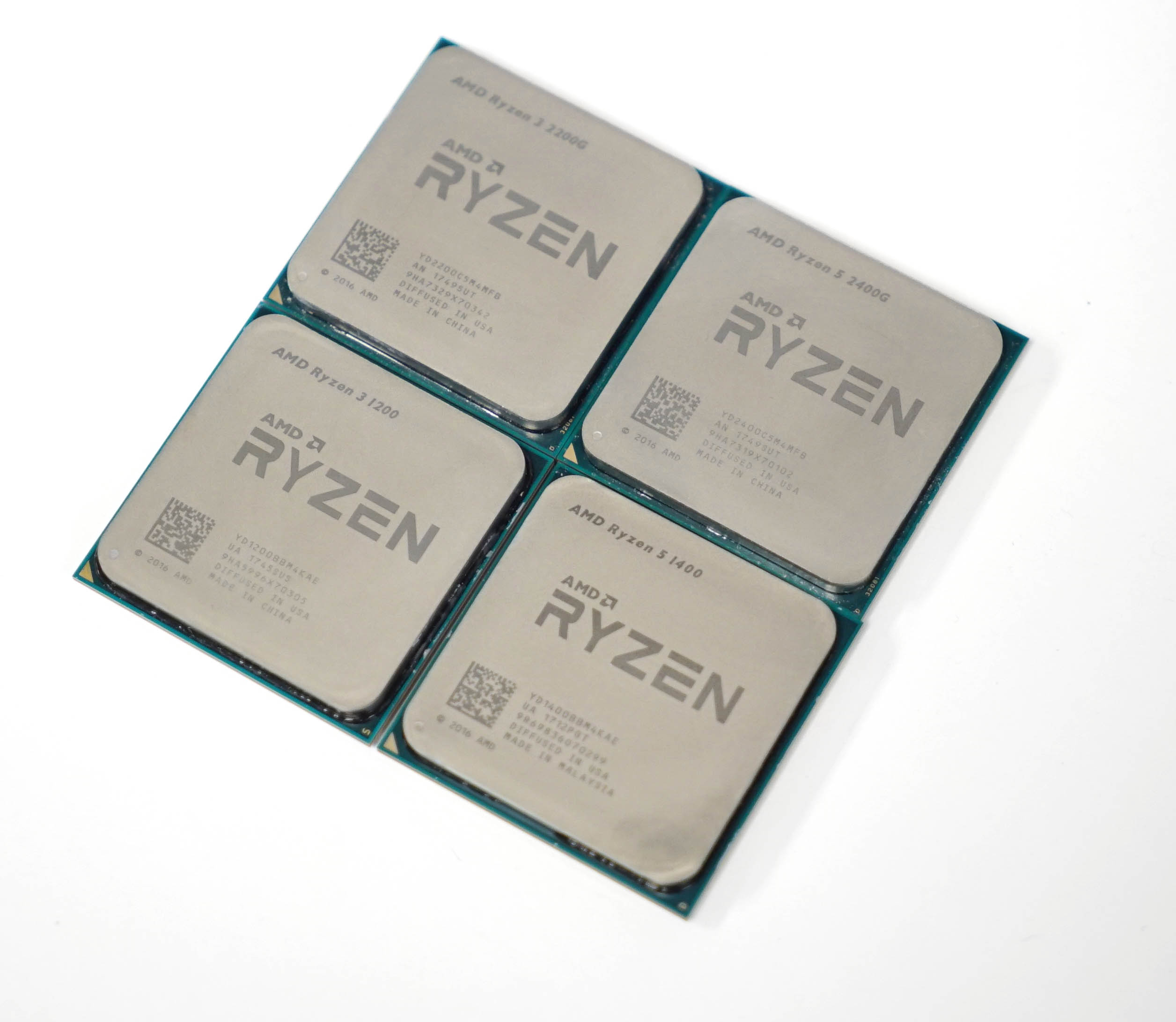 It's clear that AMD has an advantage over Intel Coffee Lake parts when it comes to more than just gaming on the integrated GPU. Any application that supports OpenCL acceleration should see additional performance from the more powerful Vega GPU. Real-world use cases are difficult to benchmark, but OpenCL acceleration is utilized quietly behind the scenes in lots of popular applications like Microsoft Office and Adobe's Creative Cloud programs.

Even for users looking to do more entry-level 3D rendering work, the Ryzen 5 2400G provides a great hidden value over the Intel Coffee Lake-powered CPUs.

Users will get the advantages of a quad-core processor with 8 threads for working inside the modeling applications, as well as the advantages of a capable GPU to render. Utilizing GPU rendering means that the system will remain responsive for light productivity tasks like web browsing, so you don't have to potentially lose the use of your computer while waiting for your rendering to complete.