Intel announced a major refresh of its Xeon D System on a Chip processors aimed at high density servers that bring the power of the datacenter as close to end user devices and sensors as possible to reduce TCO and application latency. The new Xeon D 2100-series SoCs are built on Intel’s 14nm process technology and feature the company’s new mesh architecture (gone are the days of the ring bus). According to Intel the new chips are squarely aimed at “edge computing” and offer up 2.9-times the network performance, 2.8-times the storage performance, and 1.6-times the compute performance of the previous generation Xeon D-1500 series. 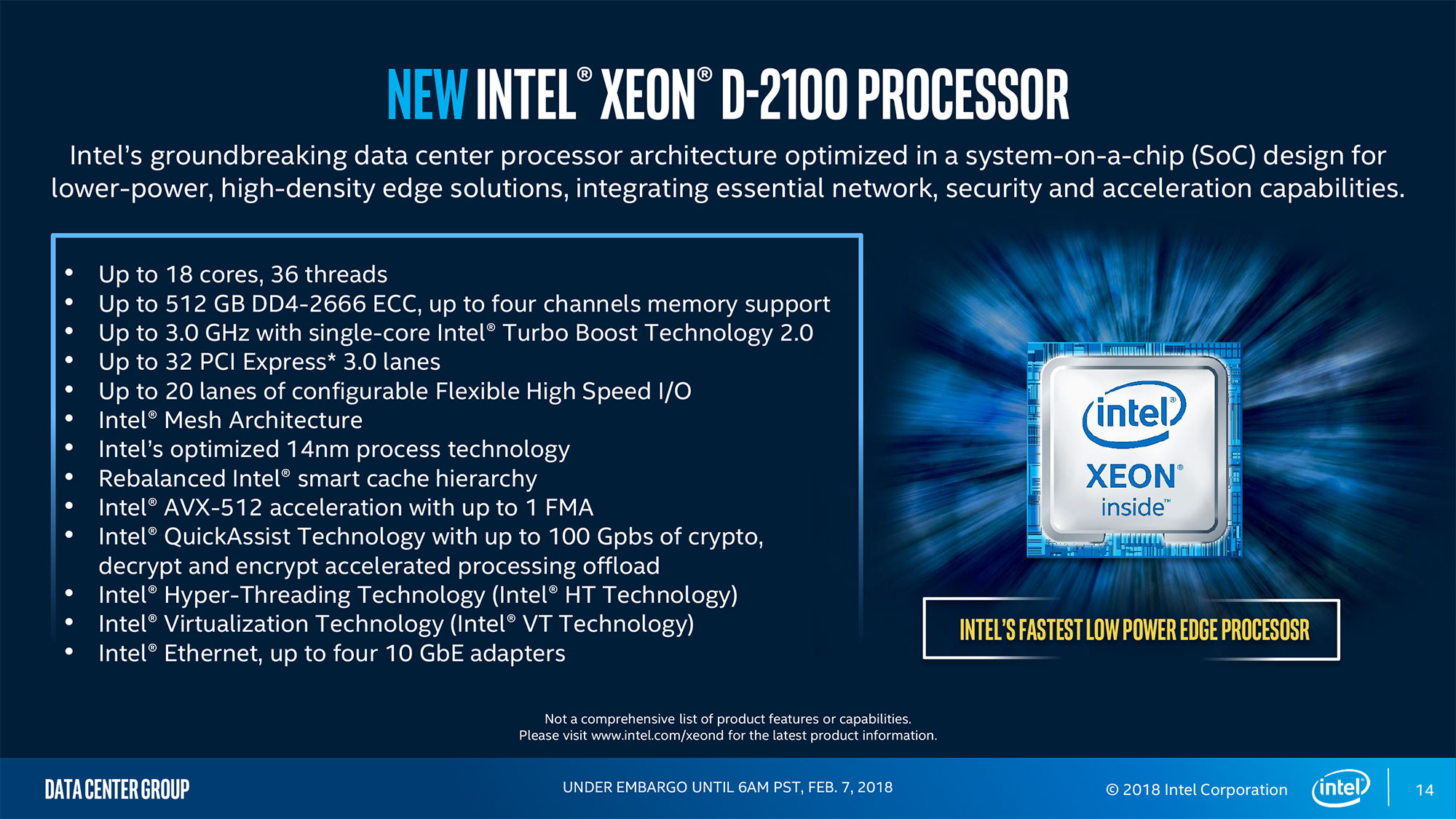 Suffice it to say, there is a lot going on here with these new chips which represent a big step up in capabilities (and TDPs) further bridging the gap between the Xeon E3 v5 family and Xeon E5 family and the new Xeon Scalable Processors. Xeon D is aimed at datacenters where power and space are limited and while the soldered SoCs are single socket (1P) setups, high density is achieved by filling racks with as many single processor Mini ITX boards as possible. Xeon D does not quite match the per-core clockspeeds of the “proper” Xeons but has significantly more cores than Xeon E3 and much lower TDPs and cost than Xeon E5. It’s many lower clocked and lower power cores excel at burstable tasks such as serving up websites where many threads may be generated and maintained for long periods of time but not need a lot of processing power and when new page requests do come in the cores are able to turbo boost to meet demand. For example, Facebook is using Xeon D processors to serve up its front end websites in its Yosemite OpenRack servers where each server rack holds 192 Xeon D 1540 SoCs (four Xeon D boards per 1U sleds) for 1,536 Broadwell cores. Other applications include edge routers, network security appliances, self-driving vehicles, and augmented reality processing clusters. The autonomous vehicles use case is perhaps the best example of just what the heck edge computing is. Rather than fighting the laws of physics to transfer sensor data back to a datacenter for processing to be sent back to the car to in time for it to safely act on the processed information, the idea of edge computing is to bring most of the processing, networking, and storage power as close as possible to both the input sensors and the device (and human) that relies on accurate and timely data to make decisions. 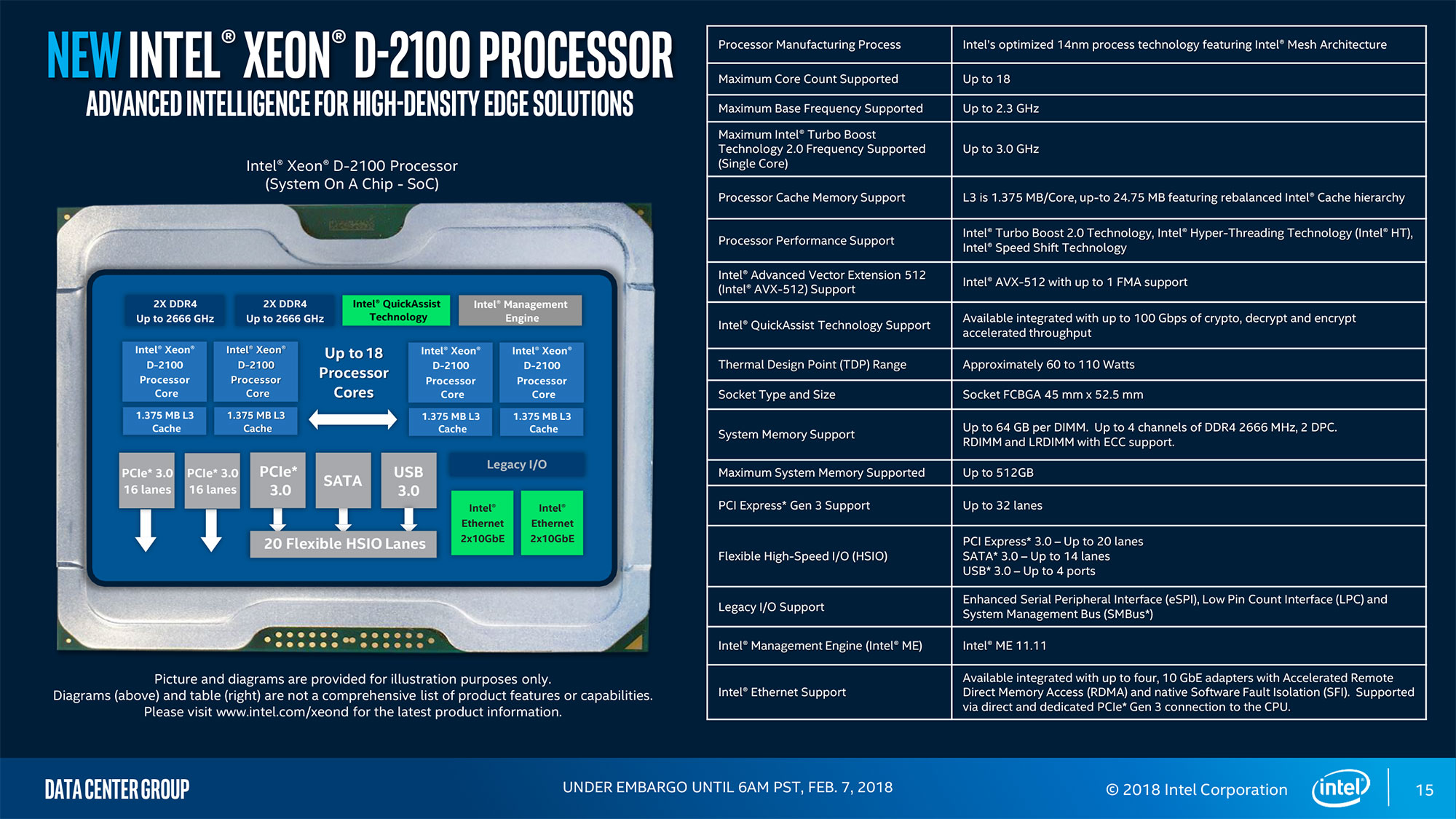 As far as specifications, Intel’s new Xeon D lineup includes 14 processor models broken up into three main categories. The Edge Server and Cloud SKUs include eight, twelve, and eighteen core options with TDPs ranging from 65W to 90W. Interestingly, the 18 core Xeon D does not feature the integrated 10 GbE networking the lower end models have though it supports higher DDR4 memory frequencies. The two remaining classes of Xeon D SoCs are “Network Edge and Storage” and “Integrated Intel Quick Assist Technology” SKUs. These are roughly similar with two eight core, one 12 core, and one 16 core processor (the former also has a quad core that isn’t present in the latter category) though there is a big differentiator in clockspeeds. It seems customers will have to choose between core clockspeeds or Quick Assist acceleration (up to 100 Gbps) as the chips that do have QAT are clocked much lower than the chips without the co-processor hardware which makes sense because they have similar TDPs so clocks needed to be sacrificed to maintain the same core count. Thanks to the updated architecture, Intel is encroaching a bit on the per-core clockspeeds of the Xeon E3 and Xeon E5s though when turbo boost comes into play the Xeon Ds can’t compete. 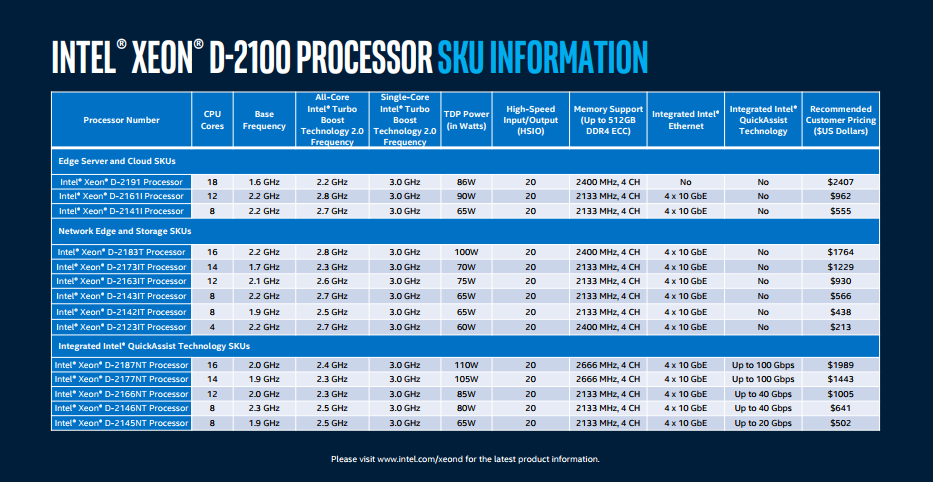 The flagship Xeon D 2191 offers up two more cores (four additional threads) versus the previous Broadwell-based flagship Xeon D 1577 as well as higher clockspeeds at 1.6 GHz base versus 1.3 GHz and 2.2 GHz turbo versus 2.1 GHz turbo. The Xeon D 2191 does lack the integrated networking though. Looking at the two 16 core refreshed Xeon Ds compared to the 16 core Xeon D 1577, Intel has managed to increase clocks significantly (up to 2.2 GHz base and 3.0 GHz boost versus 1.3 GHz base and 2.10 GHz boost), double the number of memory channels and network controllers, and increase the maximum amount of memory from 128 GB to 512 GB. All those increases did come at the cost of TDP though which went from 45W to 100W. 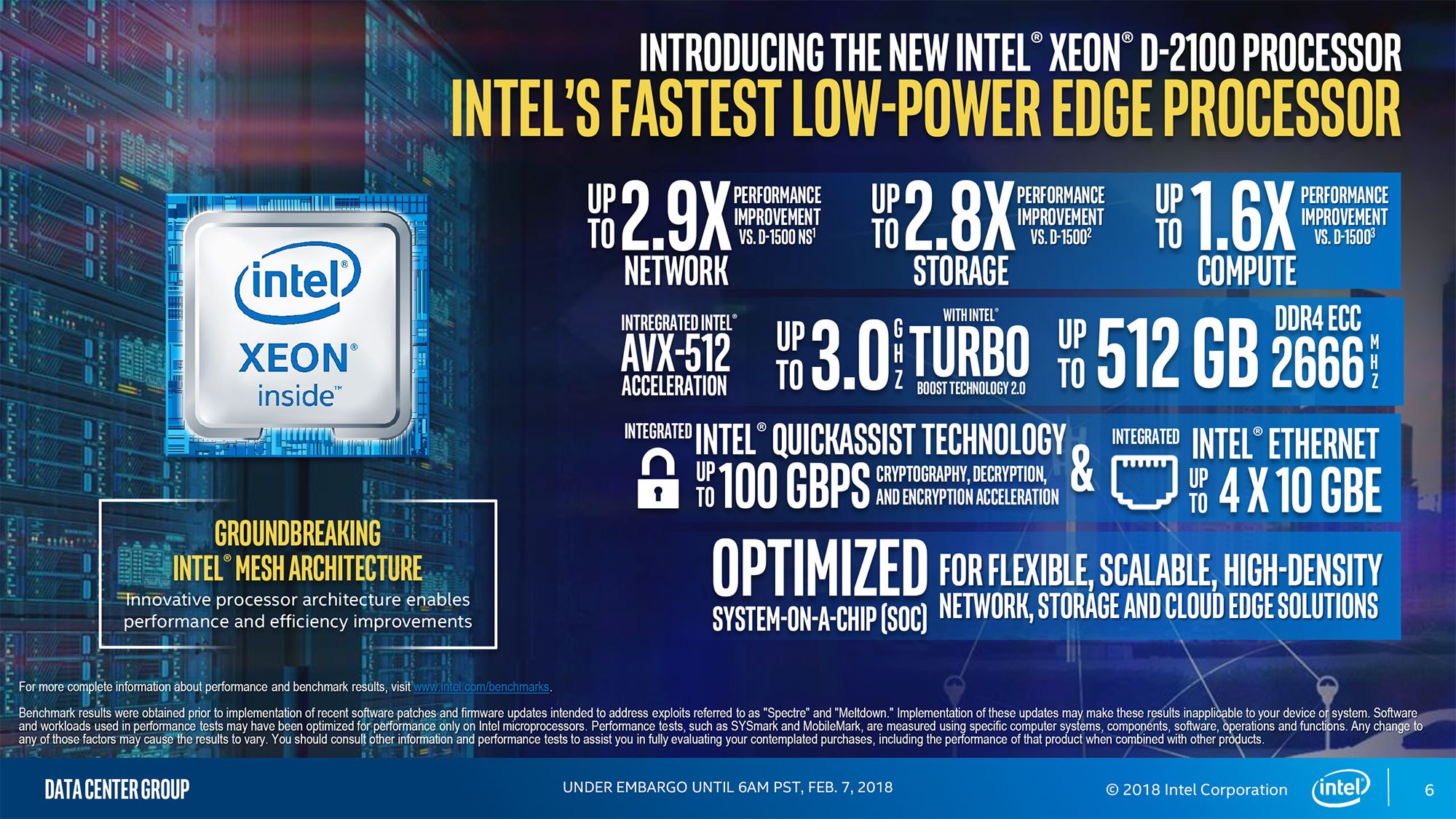 Xeon D has always been an interesting platform both for enthusiasts running VM labs and home servers and big data enterprise clients building and serving up the 'next big thing' built on the astonishing amounts of data people create and consume on a daily basis. (Intel estimates a single self driving car would generate as much as 4TB of data per day while the average person in 2020 will generate 1.5 GB of data per day and VR recordings such as NFL True View will generate up to 3TB a minute!) With Intel ramping up both the core count, per-core performance, and I/O the platform is starting to not only bridge the gap between single socket Xeon E3 and dual socket Xeon E5 but to claim a place of its own in the fast-growing server market.

I am looking forward to seeing how Intel's partners and the enthusiast community take advantage of the new chips and what new projects they will enable. It is also going to be interesting to see the responses from AMD (e.g. Snowy Owl and to a lesser extent Great Horned Owl at the low and niche ends as it has fewer CPU cores but a built in GPU) and the various ARM partners (Qualcomm Centriq, X-Gene, Ampere, ect.*) as they vie for this growth market space with higher powered SoC options in 2018 and beyond.