A Different Kind of Productivity Mouse

We look at the MX Master 2S from Logitech, a full-size mouse for professional users.

Logitech has been a major player in the world of computer mice for years. In fact, if you’re reading this, there’s a good chance you’ve used one yourself. Never one to rest on their laurels, one of Logitech’s latest entries, the MX Master 2S, puts creatives and professionals square in its sights and aims to change the way you compute. 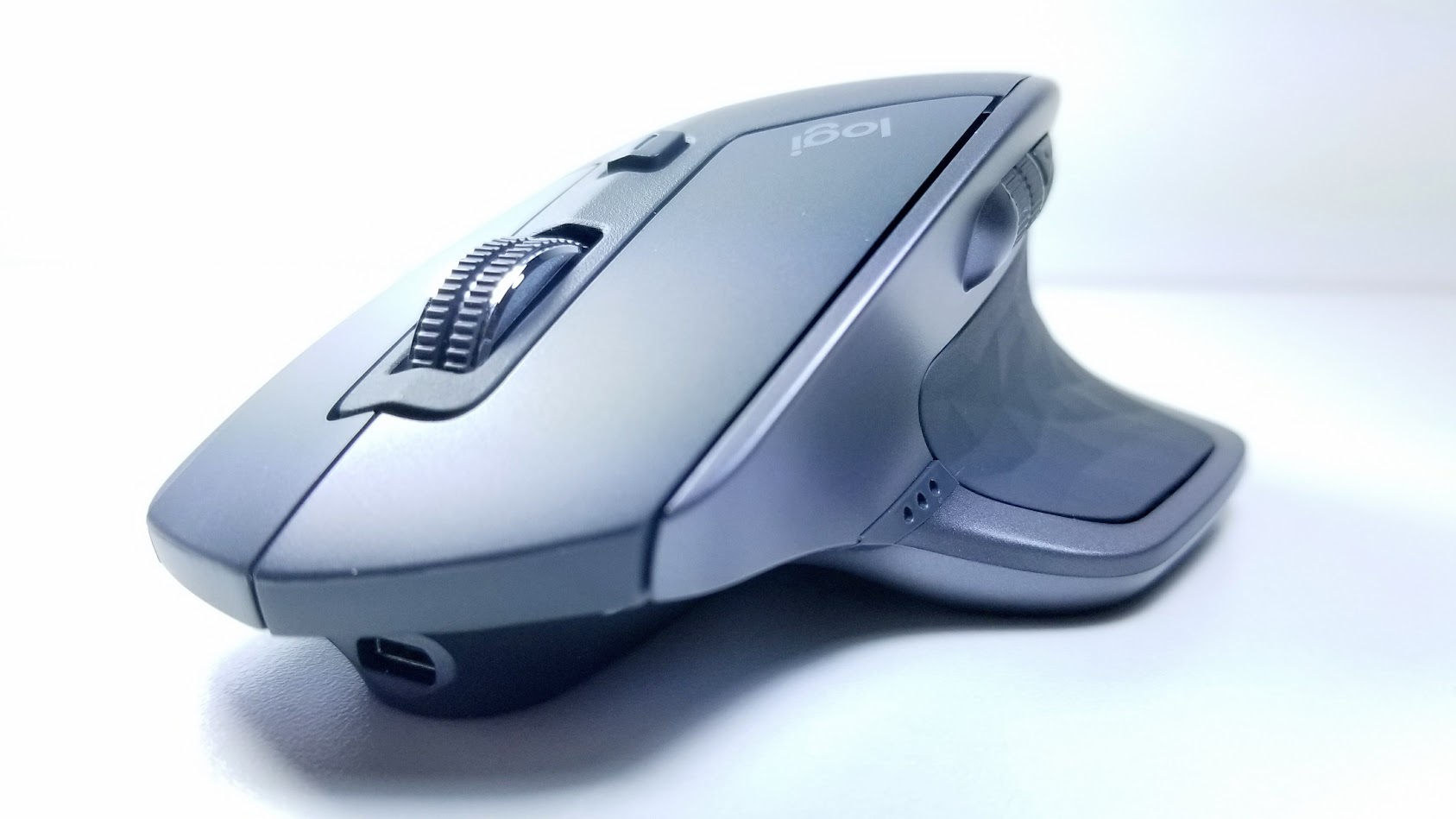 Through a suite of interesting control features, a high precision Darkfield sensor, three-system connectivity, and the unique functionality afforded by Logitech’s Options software, the MX Master 2S is more than a little interesting. Read on to see exactly what this mouse has to offer. 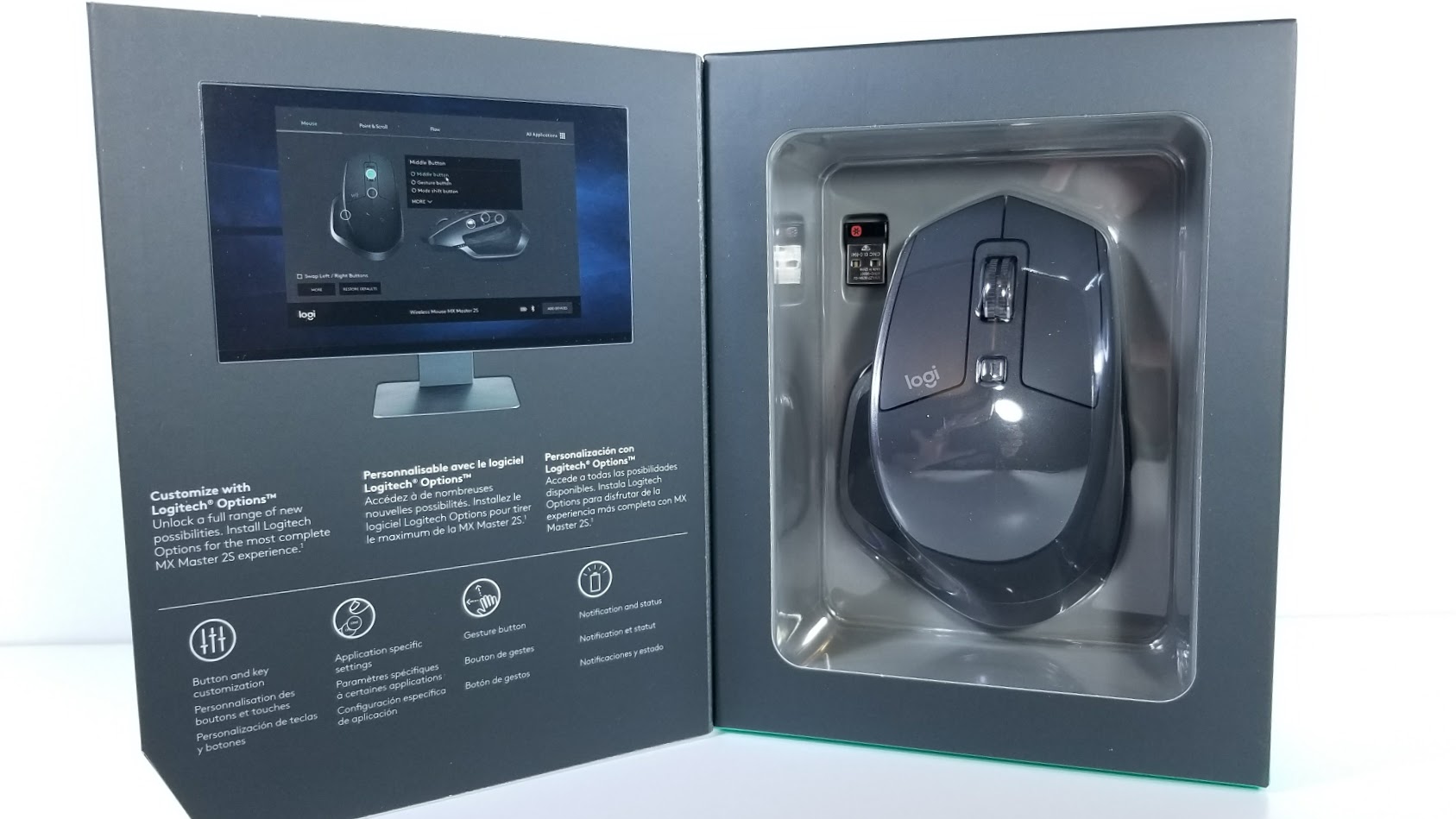 The MX Master 2S features retail packaging common to Logitech mice, with the book-like cover and inner display bubble. Behind the tray holding the mouse, you’ll also find the micro-USB cable for charging and some brief documentation. Here you’ll also the features spotlighted, and Logitech makes a special point to showcase the software suite. Right away, it’s clear how important the software package is to the 2S. 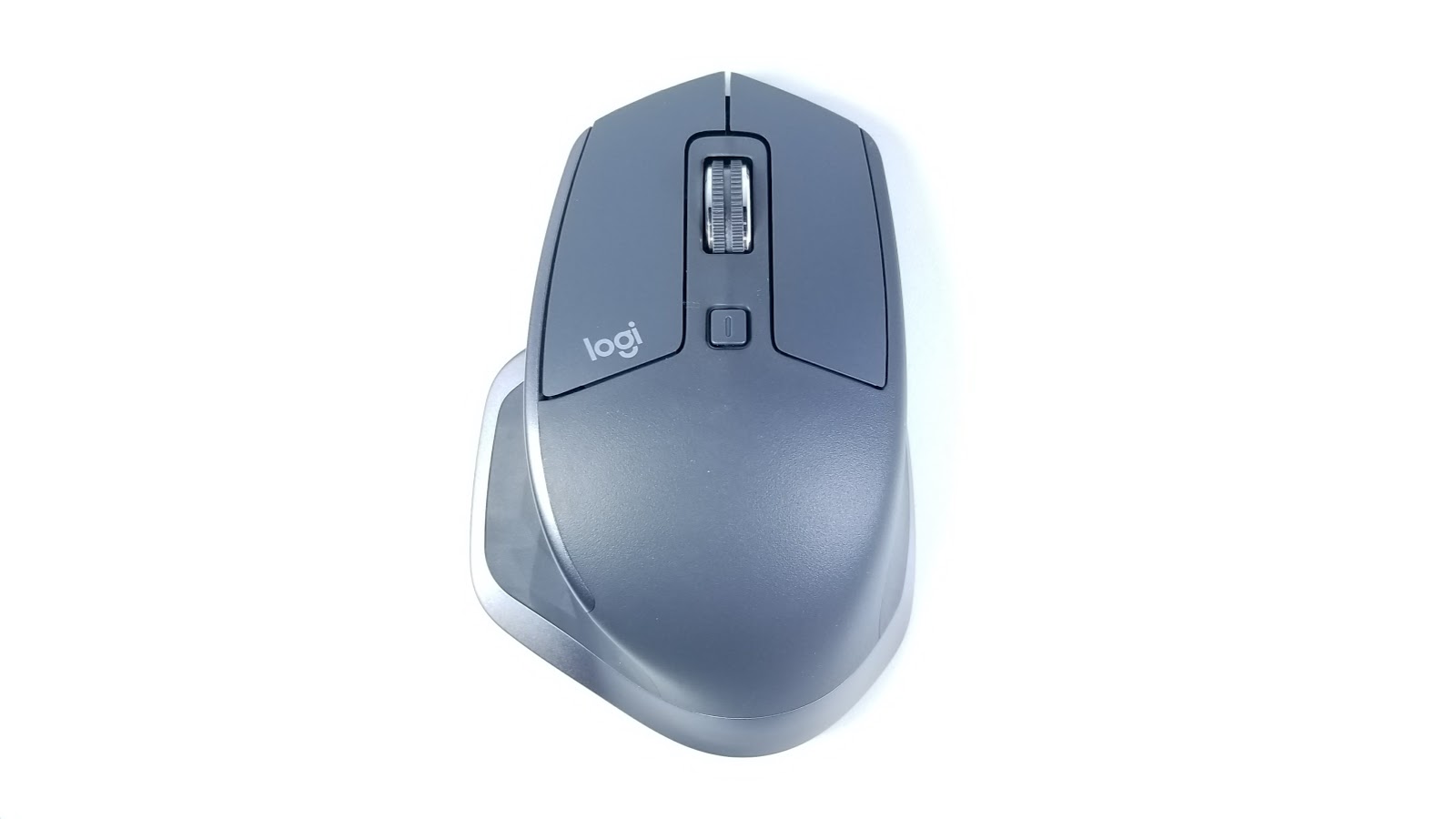 Taking the mouse of its packaging, the first thing you’ll notice is how large it is. The main body is wider and suited to palm and claw grips. The left side also features a textured wing for a thumb rest and access to the gesture button. The mouse is heavier than many, coming in at 145g, so gamers will want to take note: it’s not the best for rapid response gaming. For productivity and creative work, I found this weight to be a good compromise between functionality and holding an expansive battery without negatively impacting the smooth glide of its teflon feet.

One of the biggest selling points of the MX Master 2S is this sizeable battery. The mouse uses a Lithium Polymer storage cell rated for 500 milliamp hours. Logitech boasts that a single charge can last 70 days and that simply plugging it in for three minutes will provide enough juice to last an eight hour work day. After unboxing the mouse, I found it shipped with a about half of a charge. It charged fully in just under three hours and it’s battery indicator lights haven’t dropped at all in the two weeks I’ve had it. 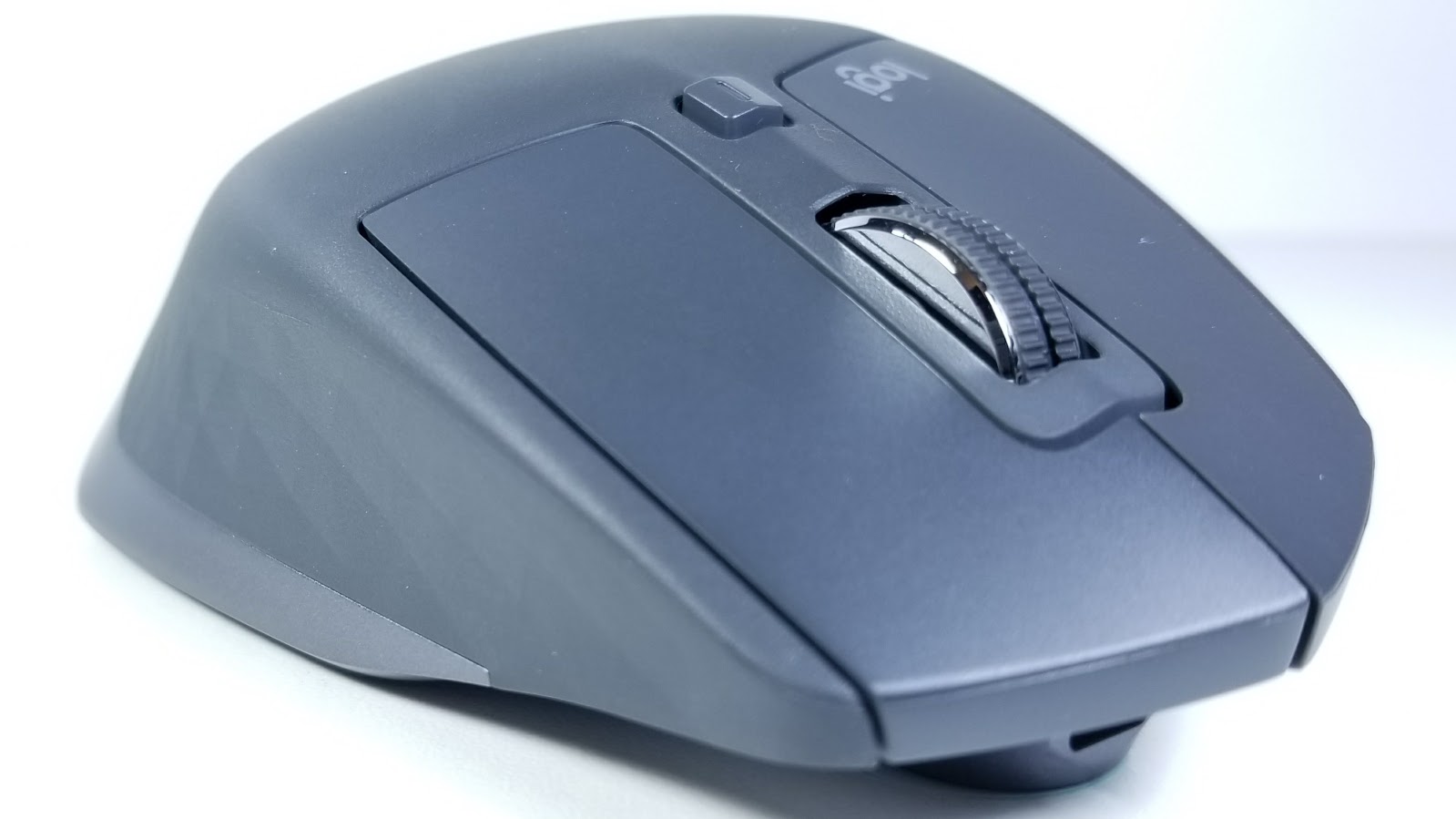 Taking a closer look at the mouse, we see the traditional two-button layout on top with the clickable scroll wheel and what first appears to be a DPI button but in fact controls the scroll type. The switches are each made in-house by Logitech and are rated for 10 million clicks each. They have a nice crisp tactile feedback and depth to prevent misclicks.

The scroll wheel is really the star of the show. The MX Master 2S features click-to-click and freewheel scroll modes and is able to adapt on the fly. The first option is the traditional notched scroll with subtle bumps for feedback, but a press of the button opens up freewheeling, which allows the wheel to spin on ball bearings to rapidly scroll through information. There is also an adaptive mode which only enters into freewheel mode when scrolled with enough force.

This type of scroll wheel feels fantastic. There’s something extra satisfying about giving your wheel a good spin and letting it roll for the next twenty seconds, not unlike a fidget spinner (hey, it’s true!). The practical benefits of flying through web pages and long documents are great and really speed up navigation. 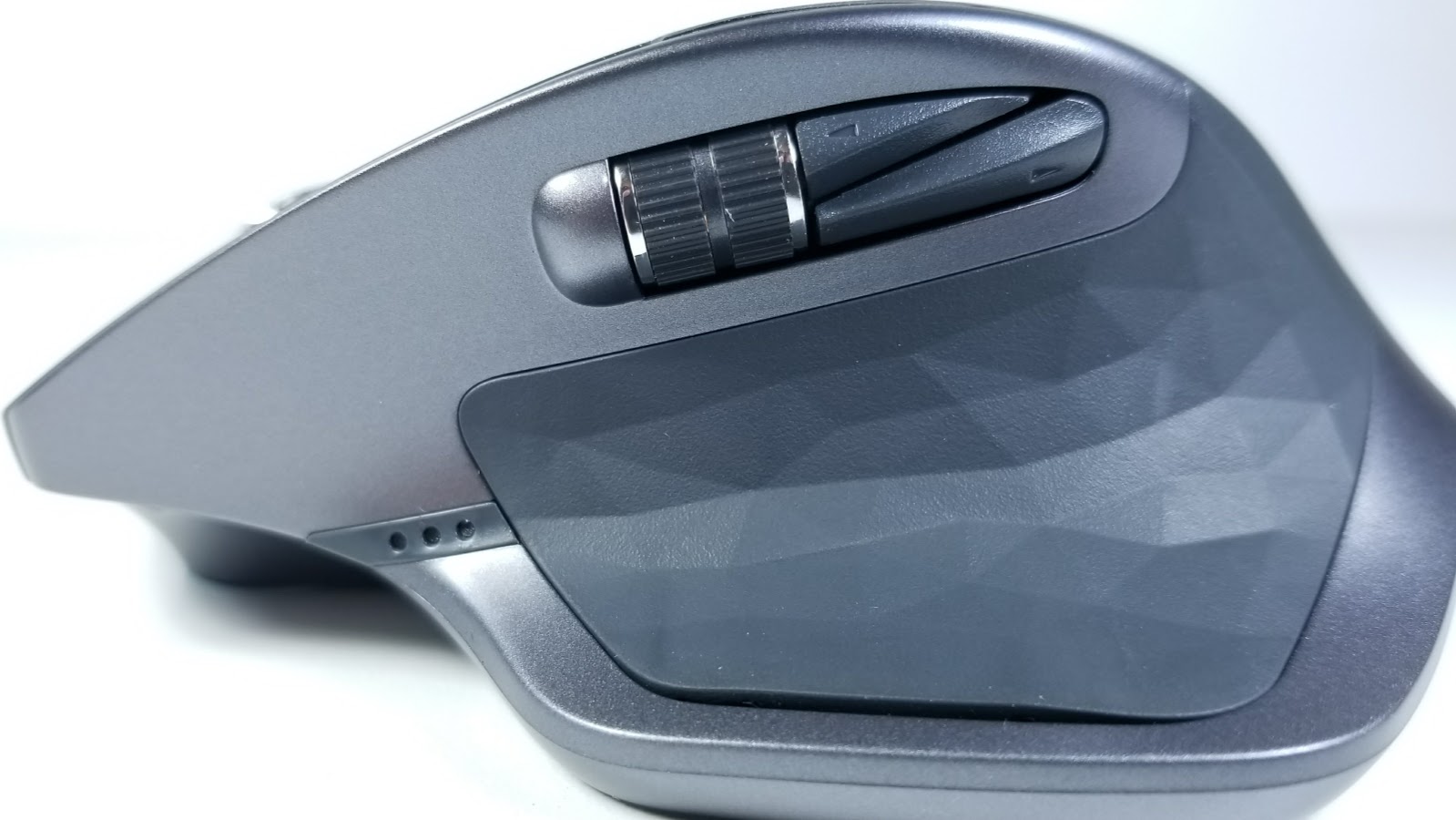 The left side of the mouse is where the magic happens. Here we have our second programmable scroll wheel, our forward and back buttons, the three battery indicator lights, and the polygon-patterned soft-touch grip of the thumb rest. In the picture above, you’ll see a slight rise in the center of the wing where the gesture button resides.

The gesture button is quite neat, though it’s utility is going to depend on the user. By pressing down on the grip and moving the mouse in one of the four cardinal directions, you can engage windows commands, customizable in the Logitech Options software. For example, holding the gesture button and swiping down might bring you back to your desktop. If you listen to music or podcasts, you might set it so swiping adjusts the volume or changes tracks. Logitech allows a number of different options, from virtual desktops, to zoom adjustments, to changing windows, and more which a big layer of functionality to the mouse.

If you’re quick with keyboard commands, you may find some of this functionality less useful, but it’s clear to see how taking the time to customize this mouse could improve your workflow. 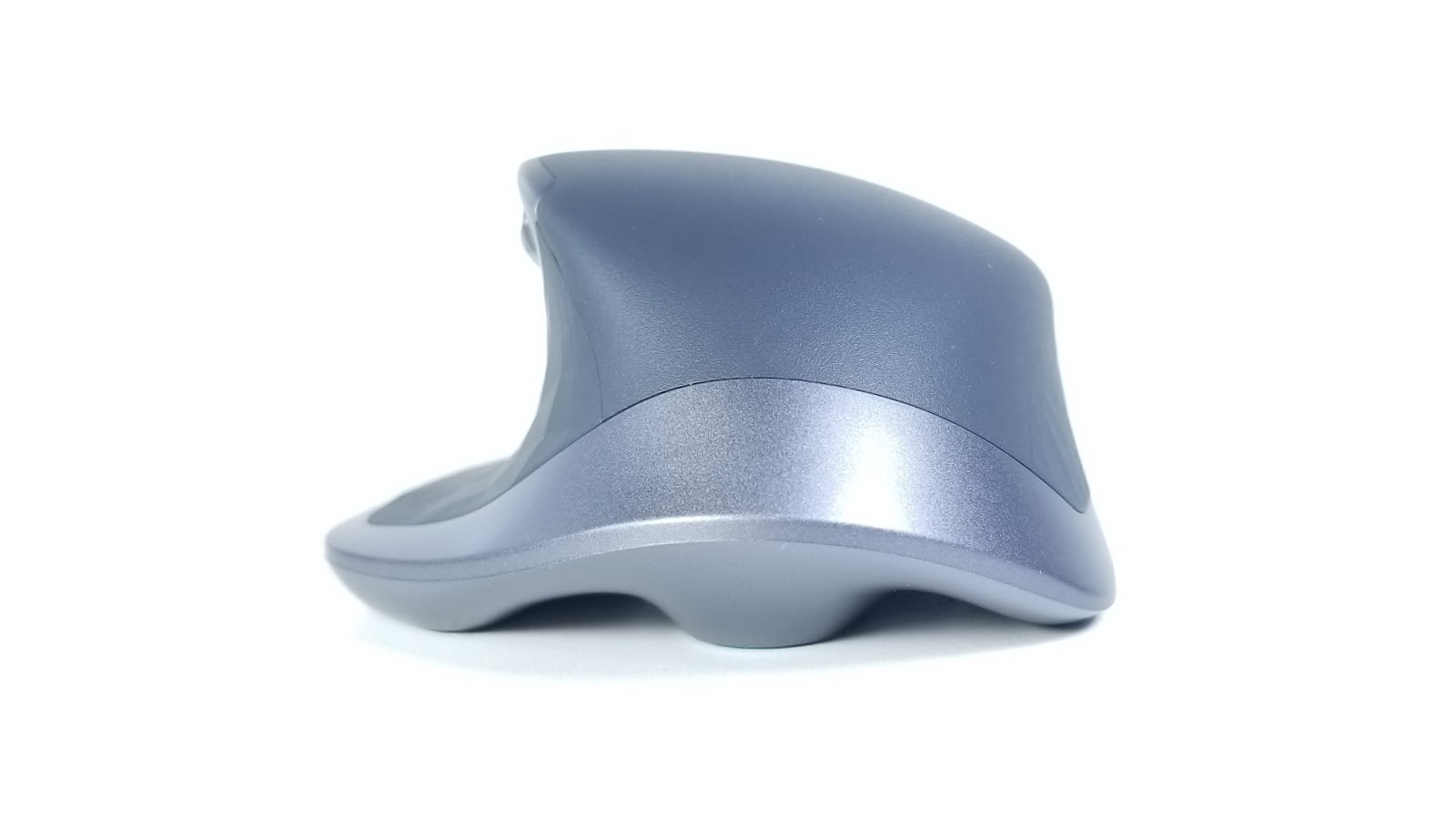 The rear of the mouse highlights its ergonomic sculpting. 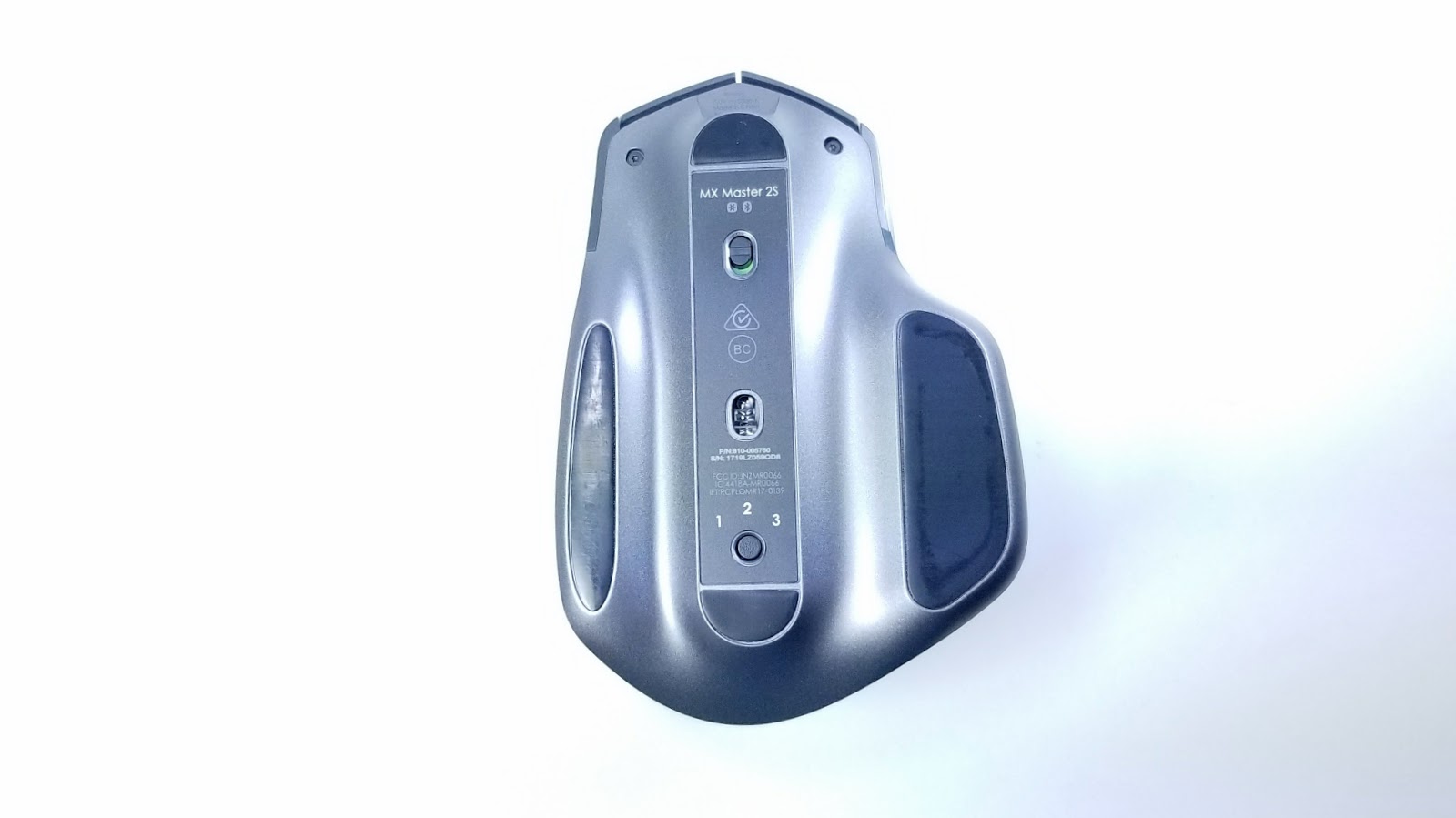 Flipping the mouse onto its back, we can take a closer look at its connectivity options and wonderful Darkfield sensor, as well as the smooth-gliding teflon feet.

One of the best features of the MX Master 2S is its ability to connect to multiple machines. On the bottom of the mouse, we can see a toggle switch labeled with 1-3 indicating the current machine it’s connected to with a white backlight. The mouse features a “Unifying receiver,” (standard USB wireless transmission) as well as Bluetooth functionality. Swapping between machines is as simple as clicking this button until the proper machine lights up.

On the top we have our on and off switch and below that the Darkfield sensor.  According to Logitech, this sensor is capable of accurately tracking on any surface. Over my two weeks of testing, I used hard and soft mousing surfaces, glass, a desktop, carpet, paper, a sofa cushion, and a wall. In every instance, the mouse never lost tracking (though uneven surfaces are obviously not recommended).

The Darkfield sensor has a maximum DPI of 4000. By default, there is no way to adjust this on the mouse itself, but the plug-and-play functionality means changing it within Windows 10 is a breezy trip to the Control Panel. Using Logitech Options, you’re given a clearer degree of control with the ability to customize your sensitivity from 200 – 4000 DPI in 50 DPI increments. 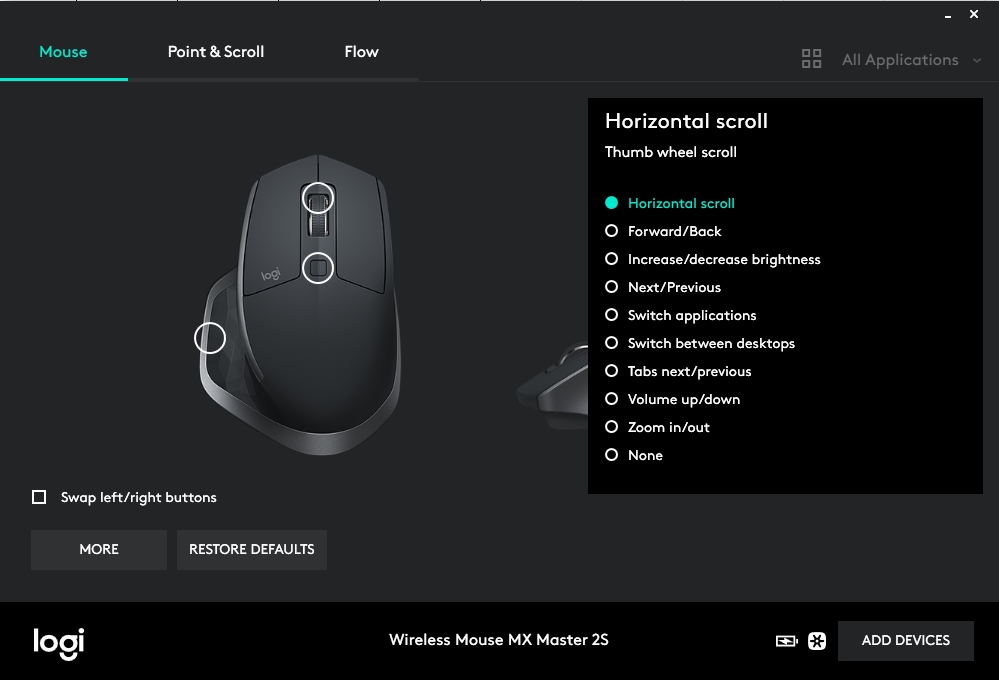 Though you could simply connect the mouse to any PC and get to work, you would be remiss not to explore the Logitech Options software package. By downloading Options, you’re able to program and customize the mouse to really make it your own. On the Mouse tab, you can do things like swapping your mouse buttons, assigning your gesture controls to really make it your own. 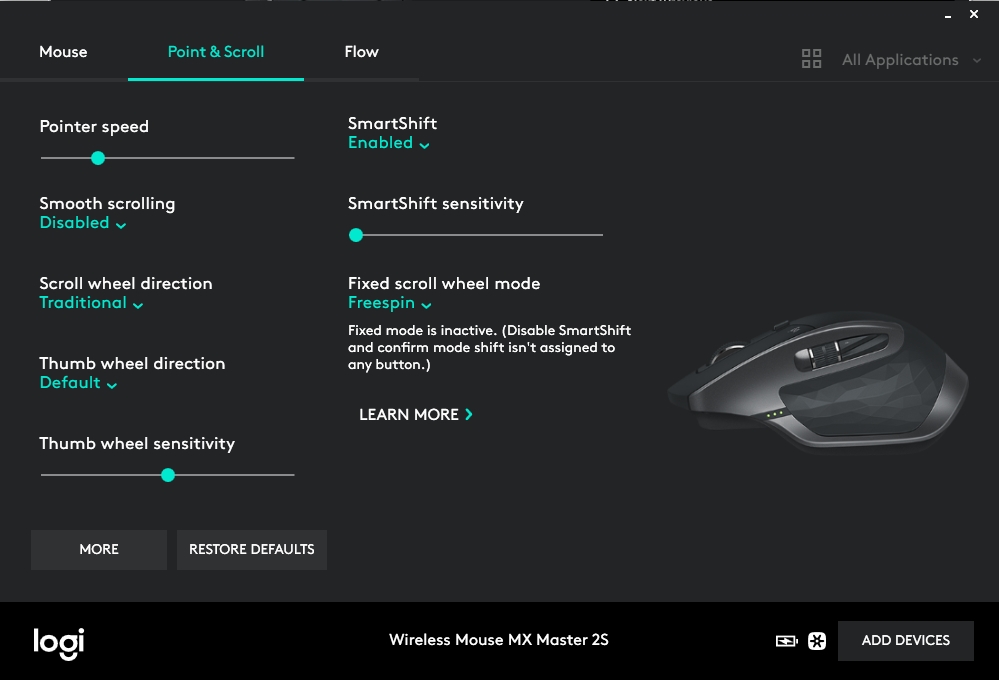 The Point & Scroll tab allows you to change your pointer and scroll speeds, adjust how sensitive the adaptive scroll wheel is, and alter scroll directions for both mouse wheels. 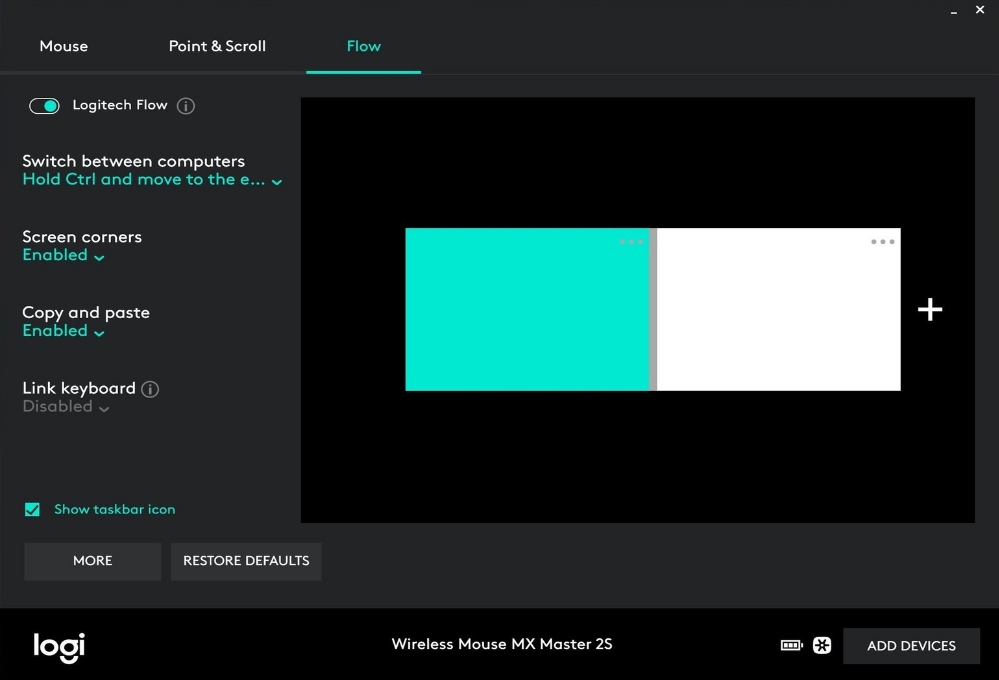 The most interesting software functionality, and clearly the biggest marketing point for Logitech, is the MX Master 2S’ Flow functionality. By loading Logitech Options onto two systems within the same network, Flow will allow the mouse to move seamlessly between both, even copying and pasting files. It’s akin to using a dual monitor system, as the Flow tab even allows you to align the two monitors so the pointer smoothly moves between both.

In my day to day work, I typically only use a single PC, so the benefits of Flow were somewhat wasted in my professional life; however, at home, the ease of moving files between PCs is absolutely fantastic. Copying directories between my main PC and my laptop has never been easier. If you use two systems regularly and don’t want to worry about navigating Windows for those file transfers, or even just having two input devices, Flow is a game changer.

The Logitech MX Master 2S isn’t a cheap mouse coming in with an MSRP of $99.99, but it does its best to justify that cost with a number of extra features firmly targeted at the professional and creative audiences. It feels great in the hand, though does come in on the heavier side due to the large enclosed battery. I appreciated the gesture button and the adaptive scroll wheel was nothing short of fantastic. The “killer feature” for multi-system users is Flow, which makes controlling multiple systems and transferring files between them a breeze. Being able to connect to three systems simultaneously through dual bluetooth and wireless connectivity is also a boon. Compared to many mice in this price range, the MX Master 2S does substantially more to earn its MSRP and is an easy recommendation to make.

HPE and AMD sitting in a tree … 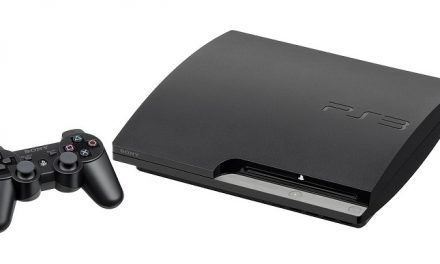