We take an early look at the upcoming Snapdragon flagship

The Snapdragon 845 is Qualcomm’s latest flagship mobile platform, officially announced on December 6 and known officially as the SDM845 (moving from the MSMxxxx nomenclature of previous iterations). At a recent media event we had a chance to go hands-on with a development platform device for a preview of this new Snapdragon's performance, the results of which we can now share. Will the Snapdragon 845 be Qualcomm's Android antidote to Apple's A11? Read on to find out!

While this article will focus on CPU and GPU performance with a few known benchmarks, the Snapdragon 845 is of course a full mobile platform which combines 8-core Kryo 385 CPU, Adreno 630 graphics, Hexagon 685 DSP (which includes the Snapdragon Neural Processing Engine), Spectra 280 image processor, X20 LTE modem, etc. The reference device was packaged like a typical 5.5-inch Android smartphone, which can only help to provide a real-world application of thermal management during benchmarking.

At the heart of the Snapdragon 845 is the octa-core Kryo 385 CPU, configured with 4x performance cores and 4x efficiency cores, and offering clock speeds of up to 2.8 GHz. In comparison the Snapdragon 835 had a similar 8x CPU configuration (Kryo 280) clocked up to 2.45 GHz. The SDM845 is produced on 10 nm LPP process technology, while the SD835 (MSM8998) was the first to be manufactured at 10 nm (LPE). It is not surprising that Qualcomm is getting higher clock speeds from this new chip at the same process node, and increases in efficiency (the new 10nm LPP FinFET process) should theoretically result in similar – or possibly even lower – power draw from these higher clocks.

With a limited amount of time for benchmarking, and an emphasis on repetition for more accurate, averaged results, we don't have a lot of variety to show on the CPU side (GPU benchmarks take much longer). Geekbench is a good place to start, and the results are quite interesting as you will see. 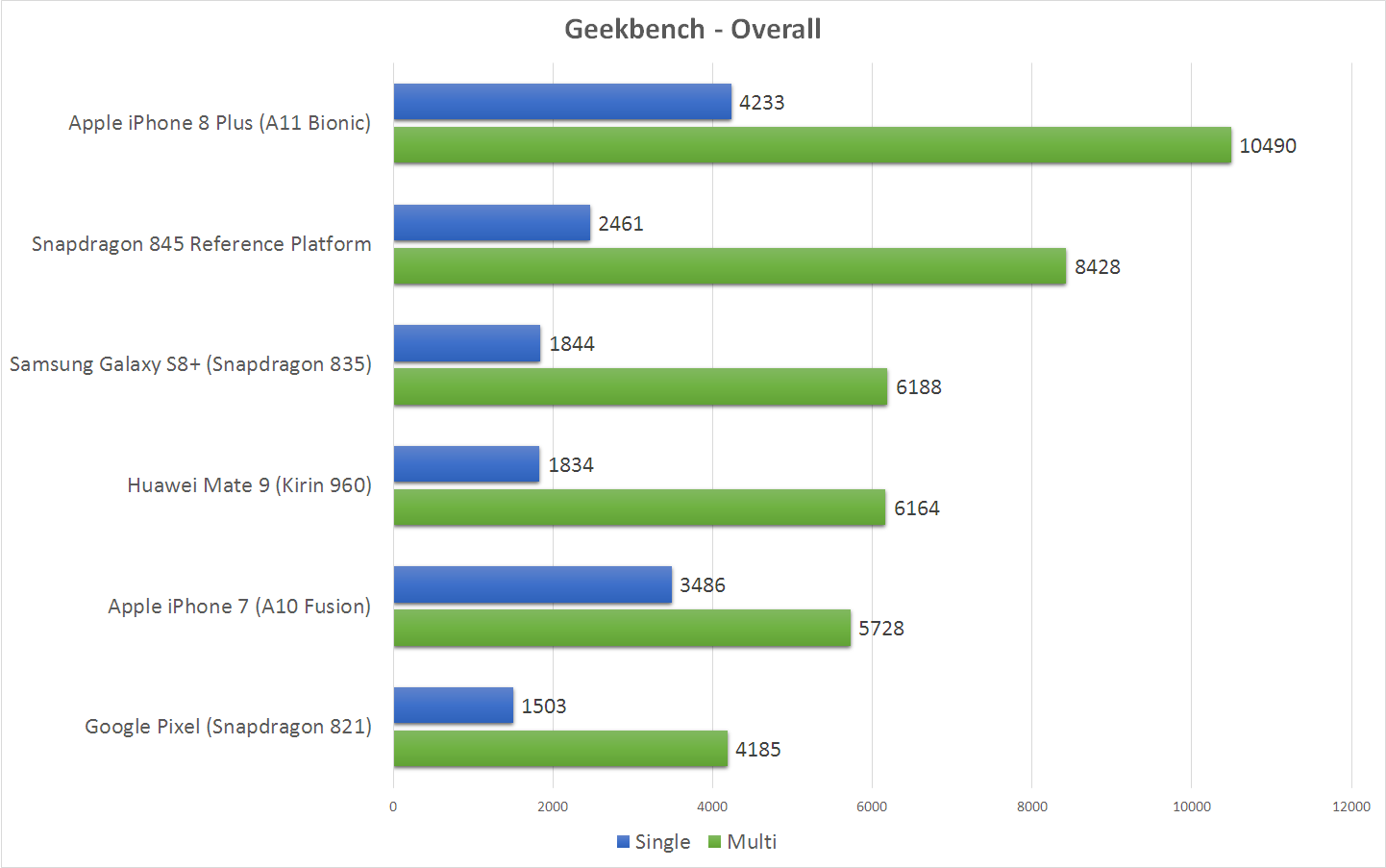 Apple is still on top with their combination of custom silicon/finely-tuned custom OS, but the gap has been shortened considerably by Qualcomm with this new Snapdragon platform running Android 8. While single-threaded numbers are still quite a bit lower than the A11 Bionic or previous A10 Fusion, the Snapdragon 845 shows significant performance gains in that area compared to the previous Qualcomm platform. Overall single-threaded results with Geekbench rose roughly 25% from the Snapdragon 835 to 845, but multi-threaded results are even more significant with gains of more than 35% with the Snapdragon 845, finishing with an average score of 8428 on the latest version of Geekbench.

Continue reading our performance preview of the Snapdragon 845 platform!

A look at the breakdown of the Geekbench results demonstrates the areas where Qualcomm's latest platform has improved over its predecessor: 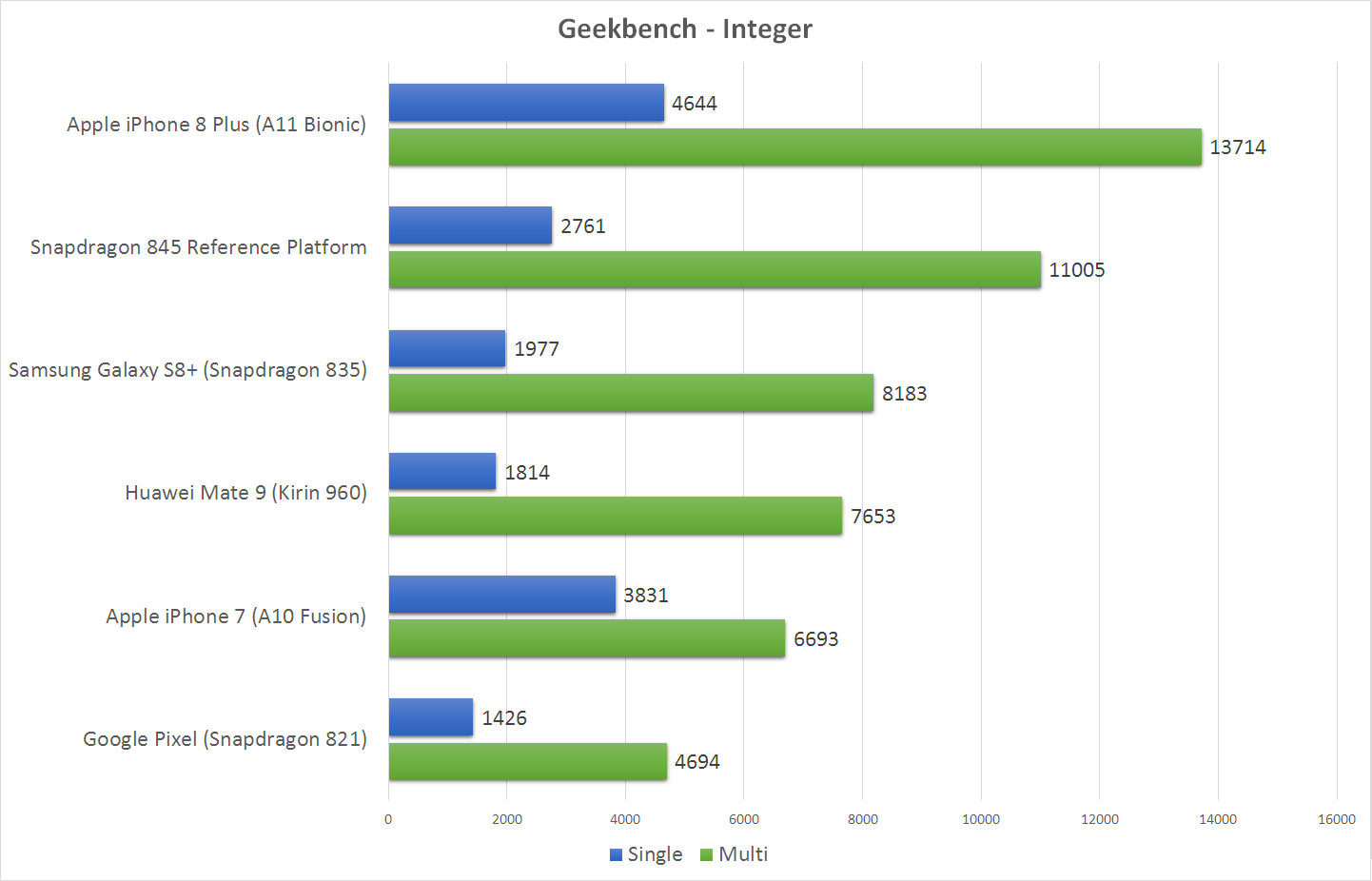 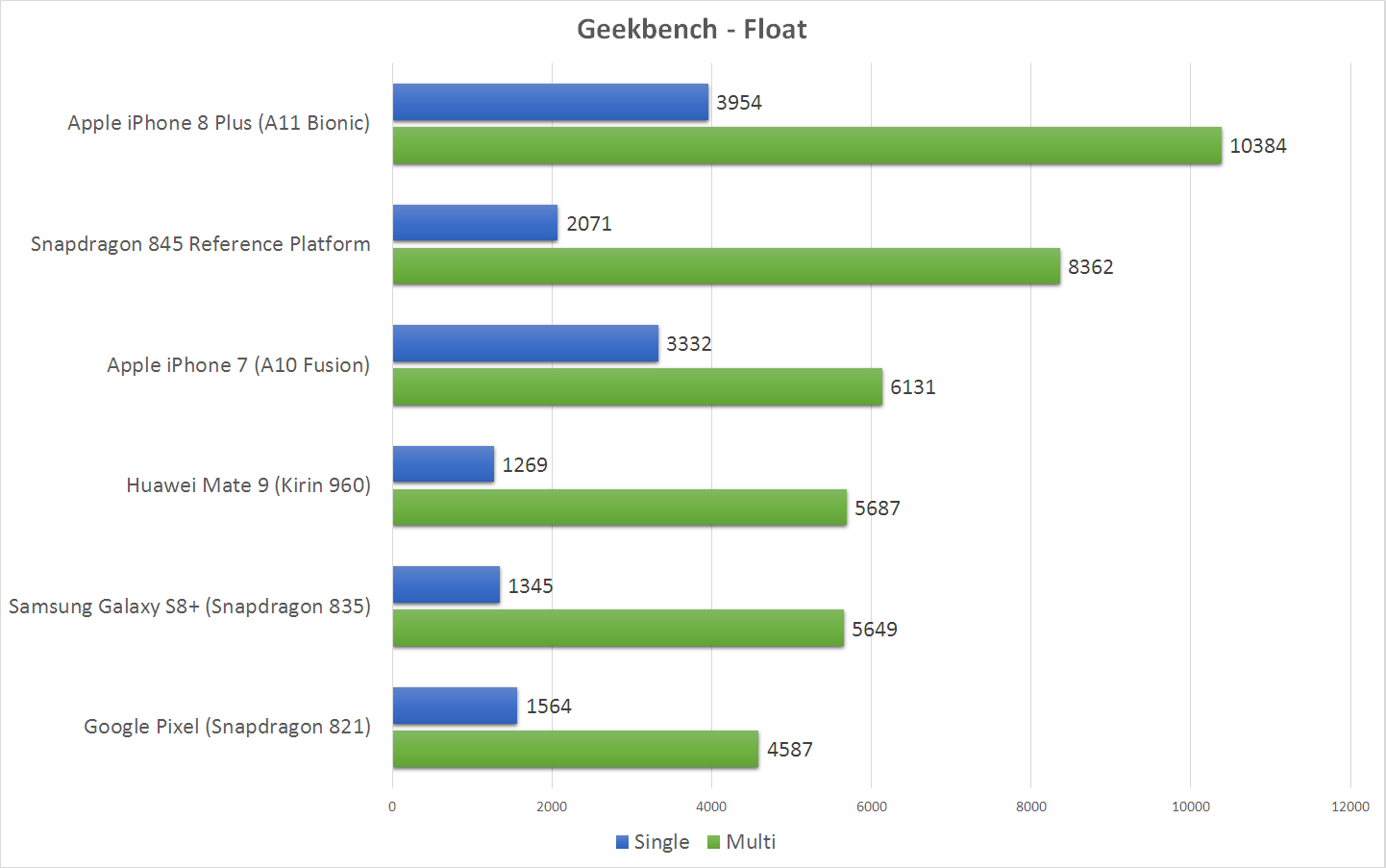 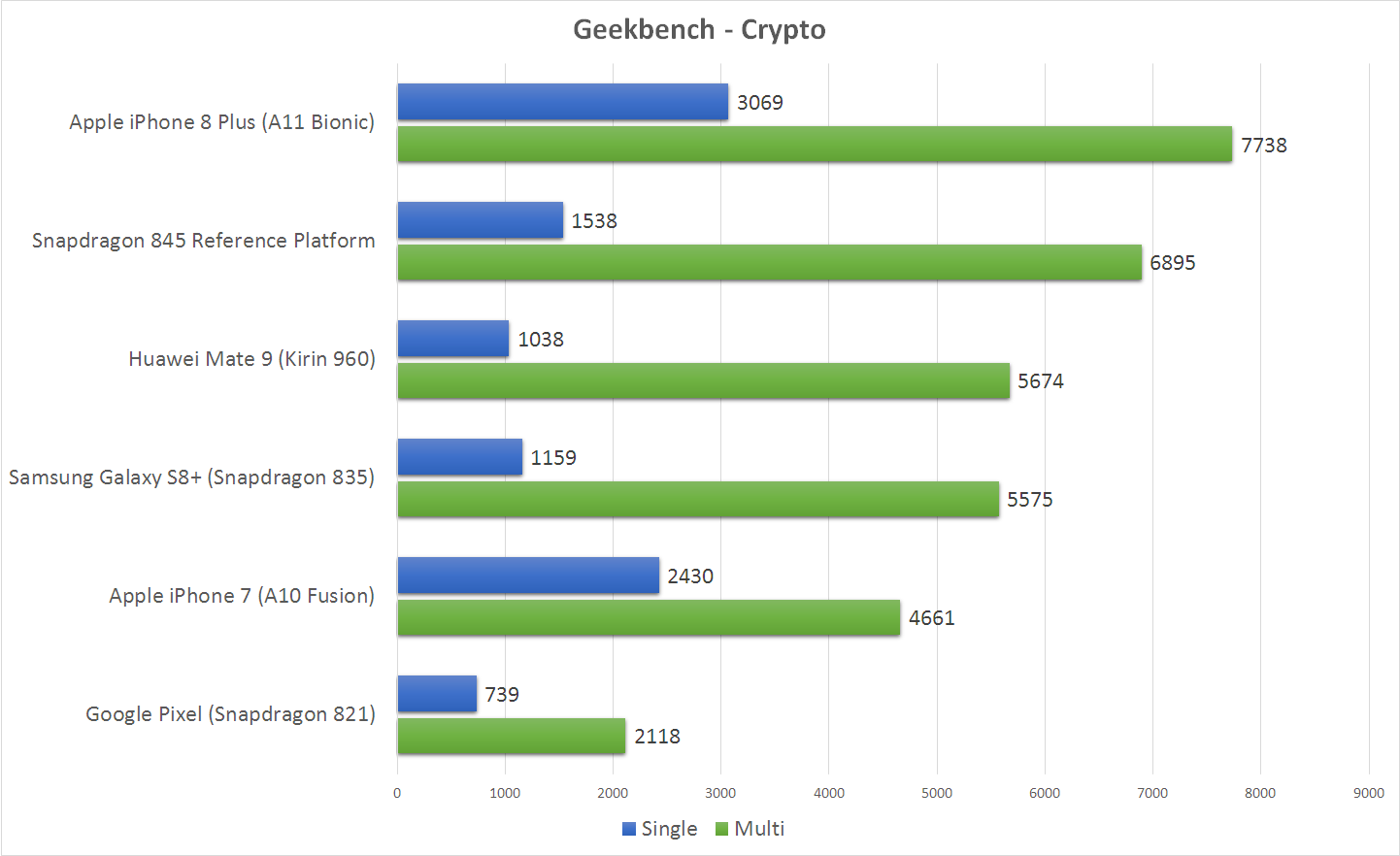 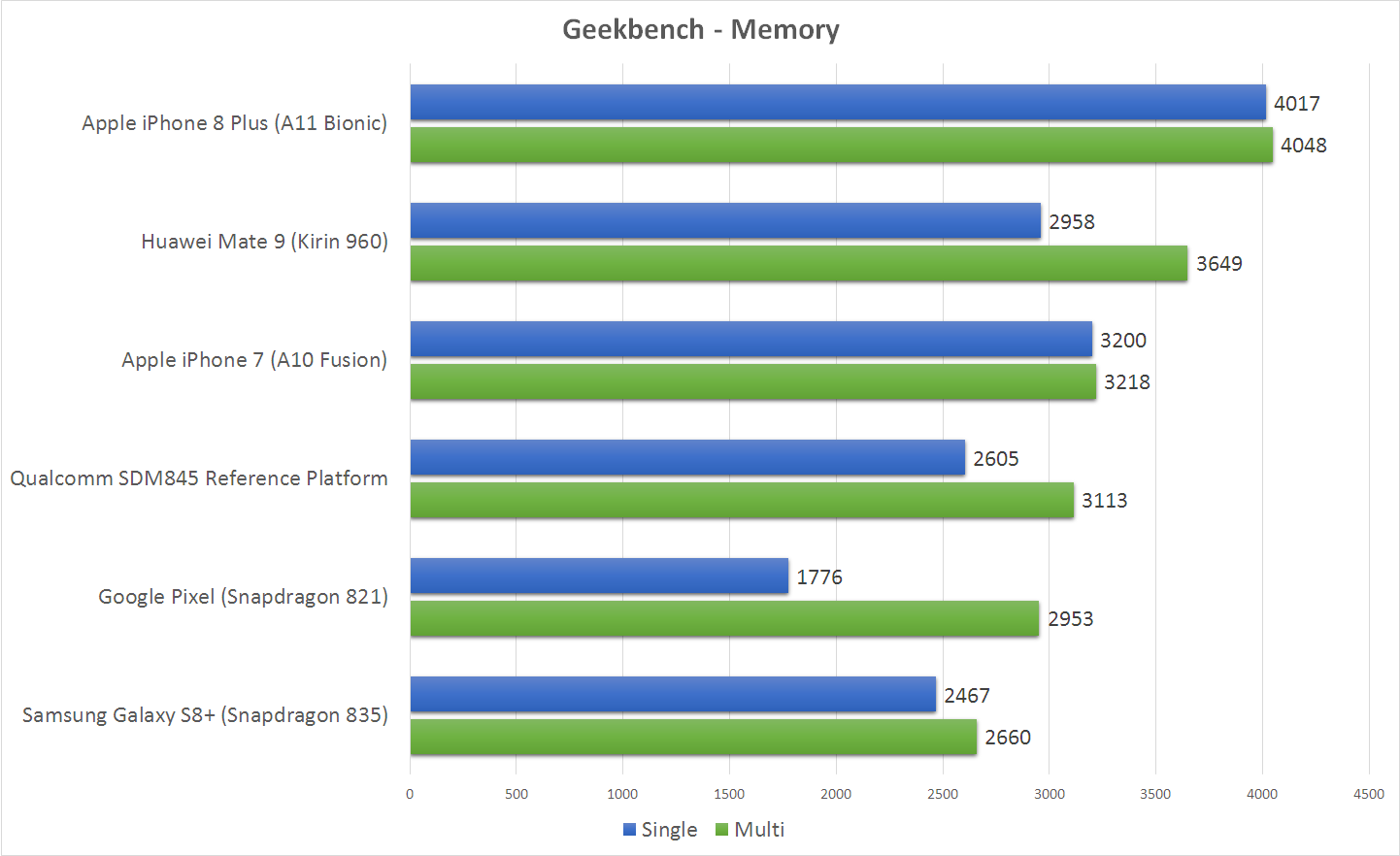 Memory is the one area where, though improving with the SDM845, Qualcomm's platform is still behind the Kirin and Apple SoCs – at least in Geekbench results. Of note, the Snapdragon 845 reference device was equipped with 6GB of LPDDR4X, which offers lower power consumption than previous-gen LPDDR4 memory.

Next we will check out a couple of whole-system benchmarks to provide a look of expected platform performance. First off is Basemark OS II 2.0, a cross-platform benchmark which uses a mix of applications for its overall aggregate score: 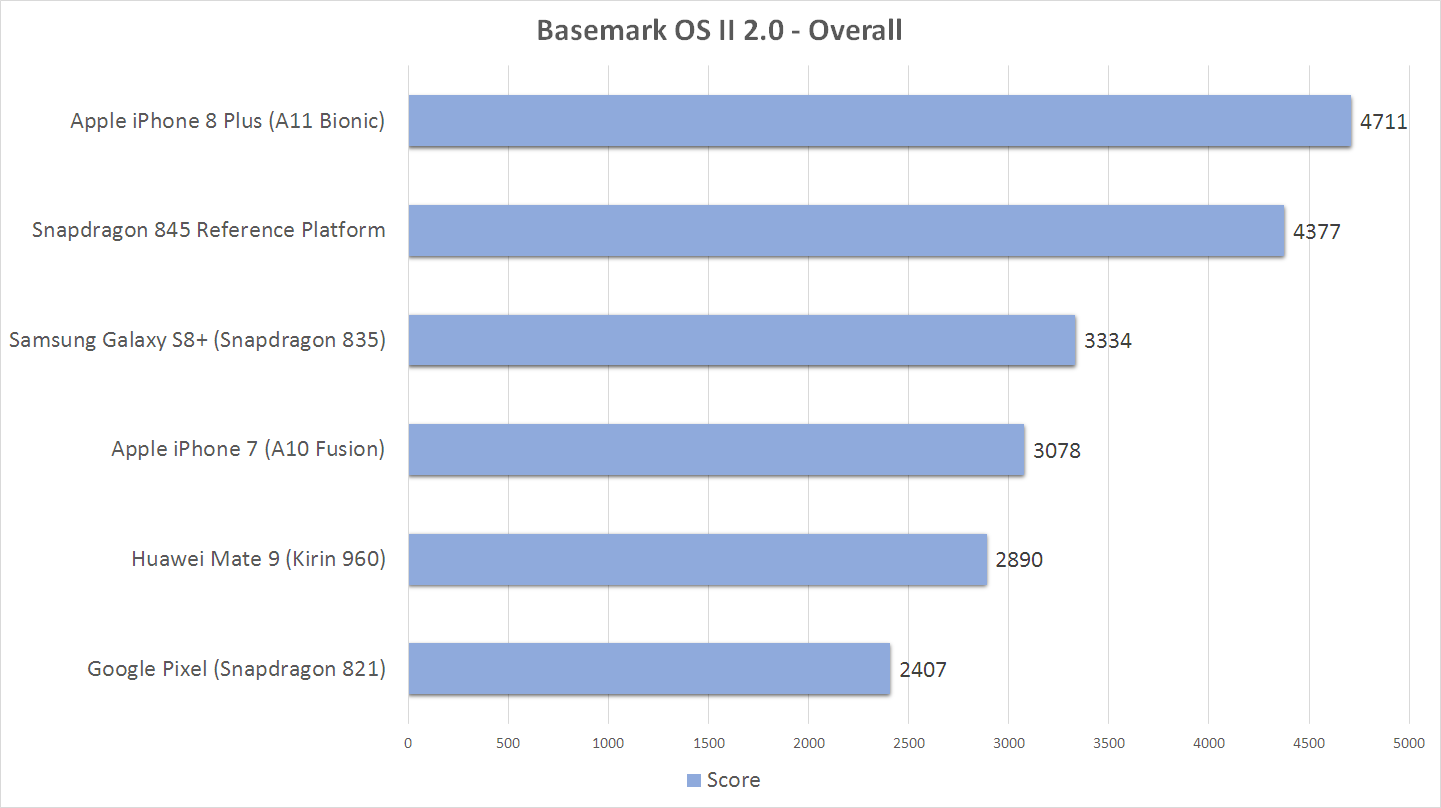 The A11 Bionic is still on top here, but not by a large margin with the Snapdragon 845 seeing large gains over the SD835.

Next we will look at PCMark's Work 2.0 benchmark, which is not available on iOS. This test will at least provide a look at how the Snapdragon 845 compares to the 835, as well as to the Kirin 960.

Even larger gains here compared the the Snapdragon 835, and a very impressive overall score of more than 8000.

On the next page we will take our first look at the all-new Adreno 630 graphics system, which promises to be much more powerful than previous – and already formidable – iterations. How much? Read on to find out!